I purchased a 1973 FJ40 from the original owner a couple weeks ago. The vehicle is basically stock, but had a Fairey OD installed at the Toyota dealer when it was purchased new (the original purchase contract was provided with all the paperwork). The owner said that up until about 6-8 years ago he would drive it once or twice a year for a few miles just to make sure everything still worked. Based on how far the tires were sunk in the gravel I feel like it was more like 10-15 years since it had moved. In fact, in all the paperwork he supply I found every single registration from California up until he moved to Idaho in 1995....but not a single Idaho registration. I have a feeling the FJ might have been sitting for as much as 27 years.

I took possession on 9/23 and immediately replaced all fluids. Everything looked fine (aside from being dark) with no visible metal. I used 75/90W gear oil in the differentials, transmission, transfer case and Fairey OD. After minimal work on the electrical, brake and fuel systems I was able to drive it the 40 miles to work and back, and it did AMAZING. The only real issue is with the OD....it doesn't want to shift from Hi to Lo. I laid underneath while my daughter shifted the OD lever and it seems to be fine. I sprayed lubricant on all the shift linkage joints just in case, but it seems like there is something inside the OD that is gummed up. I spoke with the original owner and he said he never had an issue with the OD, so we assume it has something to do with sitting for so long.

The vehicle drives fine. It was in Lo range but when I tried to shift it into Hi it wouldn't fully engage, and when I would let the clutch out it would grind. It seems to be worse at higher speeds. I was able to get it to engage in Hi when driving slow and once engaged it was smooth and worked well, but then I couldn't get it back into Lo. I drove 40 miles to work in Hi range and 40 miles home and it was fine....other than getting rolling from a dead stop. I did try a couple times to shift to Lo range but couldn't get it to engage (it would just grind when I let the clutch out).

I've researched on here and and Google but haven't had much luck. I'm hoping someone knows the Fairey OD's and can give me some pointers/suggestions. ANY help is greatly appreciated. I have never had an OD in an FJ and now that I've seen what the Hi range is like I DEFINITELY want to get it working correctly.....its AWESOME. Thanks.

My guess it could be the synchro for OD. Half on the right shows the collar that slides either way. You can see the brass synchro with teeth on it. 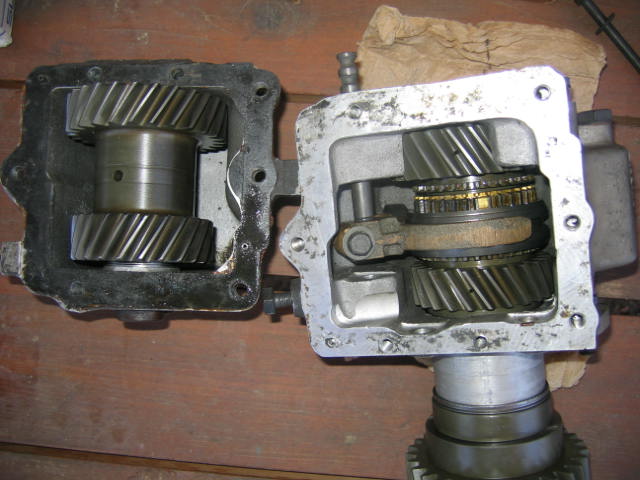 Think some where on mud there is a link to the Fairey OD manual.
P

The grinding is the dog teeth of gear banging on the dog teeth of collar, synchro not working, FWIW IMO the 75wt is to thin. The shifting on that may have to be done when stopped , in nuetral, especially if the thin oil isnt getting the synchro going.
John on the hawgs

So maybe the oil is just too thin? That is definitely an easy thing to start with. Is 90W required or is there a preferred weight I should use instead? I have a drum of 75/90W with a pump which is why I used that oil. I didn't realize it could cause an issue like this.

Thanks for the suggestions. I'll change out the oil to a heavier straight weight and see what happens. Should I be running straight 90W in the tranny and transfer as well or is the 75/90W alright for those?
A

I think I have some SAE140 gear oil....would that be TOO thick? The original owner said the OD whined so maybe a heavier oil would help quiet it down, but would it cause harm or affect the functionality of it?
P

the 140 might be too much especially when cold. IMO 90wt is good for all that you mentioned. The other thing is that the shifter fork may be worn which wqould cause it not to shift all the way into gear, the inside might be all gummed up and messing with the synchro as well, and/ or shifter isnt getting the throw it needs to engage the gear properly, try unhooking the linkage and shifting by hand to see if the lever moves farther than when attached to linkage.
John on the hawgs

Transfer case shares to same oil so not sure I wouldn't be going that heavy of that weight especially going into winter. Remember a elk hunt back in the early eighties where we camped at 8,000' and temperatures were sub zero at night. Would start my FJ40 and once I got it so it would stay idling would turn the heater on. Them put the transmission in gear and transfer case in neutral so the oil would thin out enough to shift.

Thanks guys. I'll track down some 90W and see what happens.

I've searched around and found a couple old Fairey manuals but nothing that great (basically just installation steps and schematics) or specifically regarding the FJ40 model OD. I thought I read that the OD has its own fill plug. I'd have to climb underneath again to verify, but I thought it was up high (obviously) on the back of the unit. When I pulled it it definitely LOOKED like a drain/fill plug. I pumped oil in to that level and called it good. Hopefully that is correct. If not, are you just saying that I fill the transfer case to the plug level and that takes care of the OD too??

adavis said:
Thanks guys. I'll track down some 90W and see what happens.

I've searched around and found a couple old Fairey manuals but nothing that great (basically just installation steps and schematics) or specifically regarding the FJ40 model OD. I thought I read that the OD has its own fill plug. I'd have to climb underneath again to verify, but I thought it was up high (obviously) on the back of the unit. When I pulled it it definitely LOOKED like a drain/fill plug. I pumped oil in to that level and called it good. Hopefully that is correct. If not, are you just saying that I fill the transfer case to the plug level and that takes care of the OD too??
Click to expand...

I would lift the right side of the cruiser to be sure oil.is spilling over into the OD. Would not hurry filling it either. Once your done filling the fill plug on the transfer will spill out any over fill. You want.to be 100% sure you have a full. Years ago sold a couple of these. One person called and said it seemed noisy. When I ask if he took his time filling and made for sure the OD was full he said no he was in a hurry. Told him to lift the cruiser on the right and be surenit was full. Never hear back but assume that was probably the problem. Where the OD bolts to the back of the transfer case is a tight without big gaps. Need to take your time to be sure ot is filled. No fill on the OD I am aware of.
A

Alright @Living in the Past I will check that. I'll try to take a picture of the plug that I pulled to fill the unit. It DEFINITELY looked exactly like a drain/fill plug.

To be clear....I should jack up the passenger side of the vehicle and slowly add oil to the transfer case until it runs out the fill hole, right? That will ensure that there is enough oil in both the transfer case and the OD. Any guesstimate on how much oil it will take??

If you happen to have a complete manual (operation and service) PDF I would really love to get a copy if possible. THANKS!!
Last edited: Oct 4, 2022

@John Smith THANKS for that PDF....its actually the one that I found a printed out. I was hoping for a "troubleshooting" section but it didn't have one. I did just reread it and found the section about filling with oil. I guess this means there IS a fill plug on the OD unit??

@Skreddy I am going to post pics but was going to wait till my new random orbital polisher showed up and I could get her polished and waxed. It is amazing how clean this thing is....like literally NO RUST ANYWHERE. I do have a couple quick pictures that I will post here though. The side pic is before I picked it up....where it sat for quite likely the last 27 years. It is 100% original and I even got the original purchase receipts from Riverside Toyota in California including the service records. I bought it from the original owner and he kept everything (even the pieces of the rear wheel openings that he cut to install bigger tires). He's still looking through his stuff to find the original mirrors, more manuals, and other misc parts he has including a NOS brake booster "just in case". The original tool kit under the seat still has all the tools wrapped in original plastic!!
He paid the dealership to undercoat the vehicle, install the Fairey OD and an AC unit. The original owner installed Kaiser aluminum sun shades in every window (with little squares of velcro) which honestly probably saved the interior. The dash is perfect as well as all the seats except for one hole in the passenger seat. Its a literal time capsule and I'm so very fortunate to now own it. I look forward to maintaining the originality and enjoying driving it. 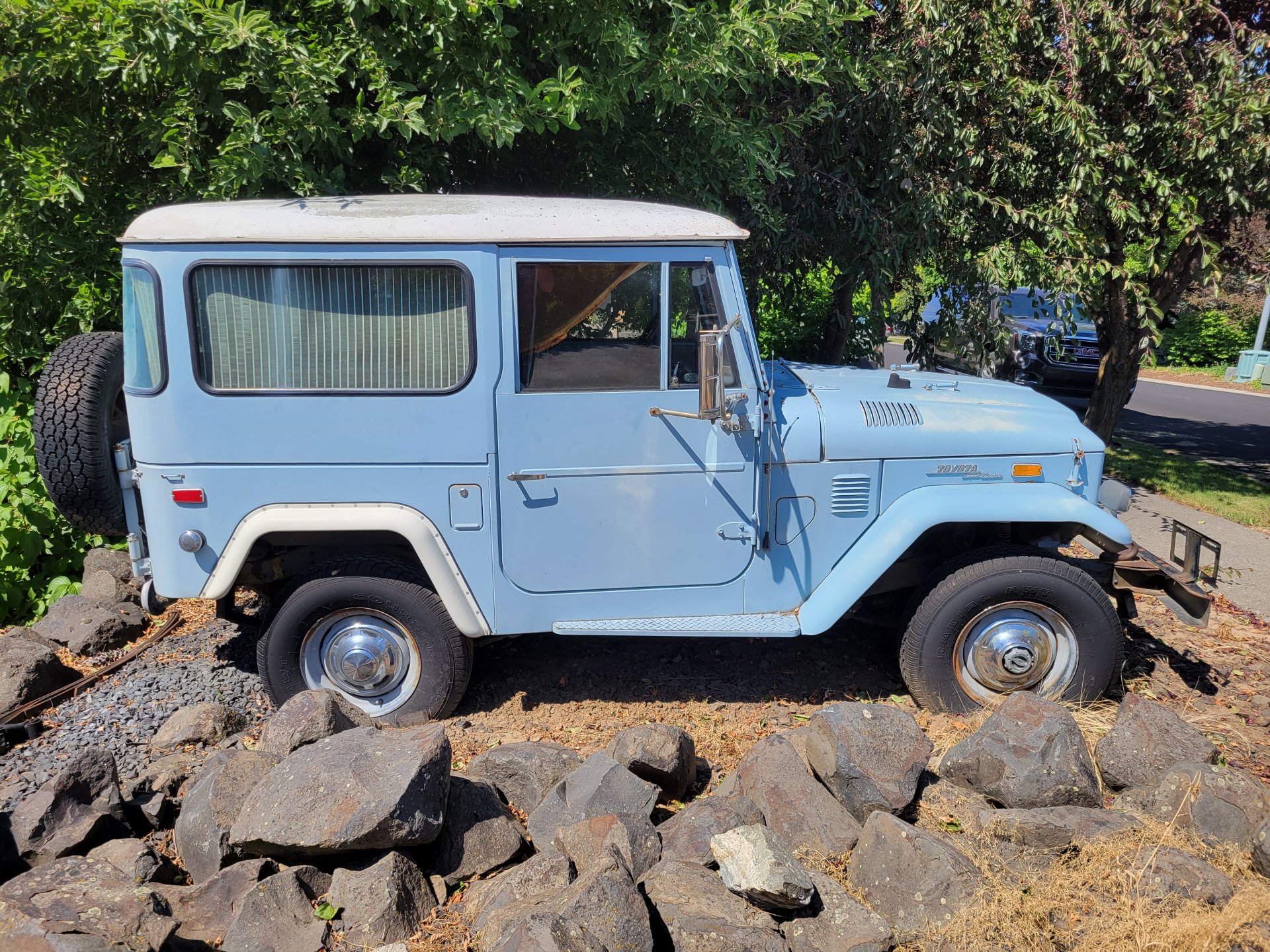 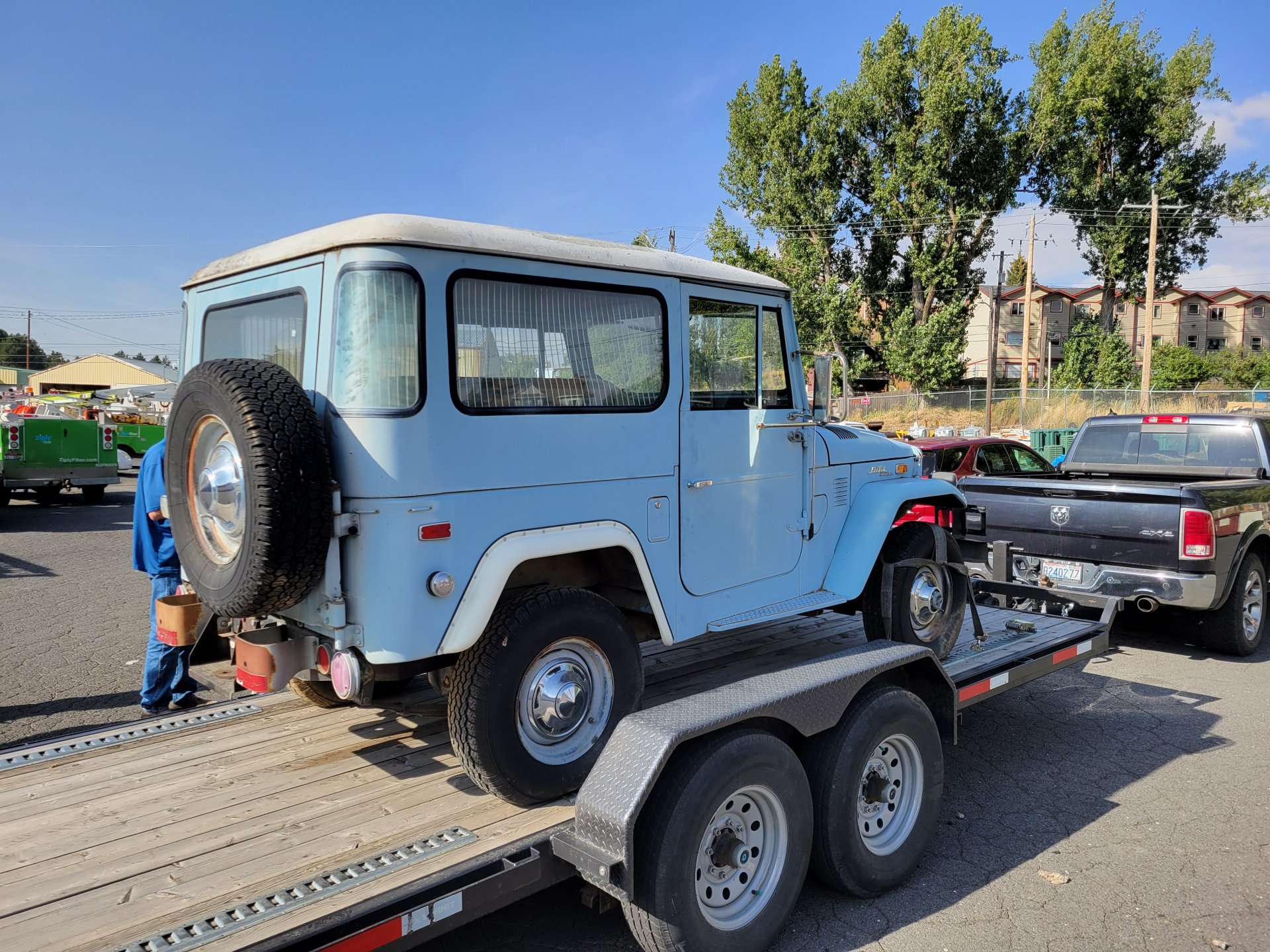 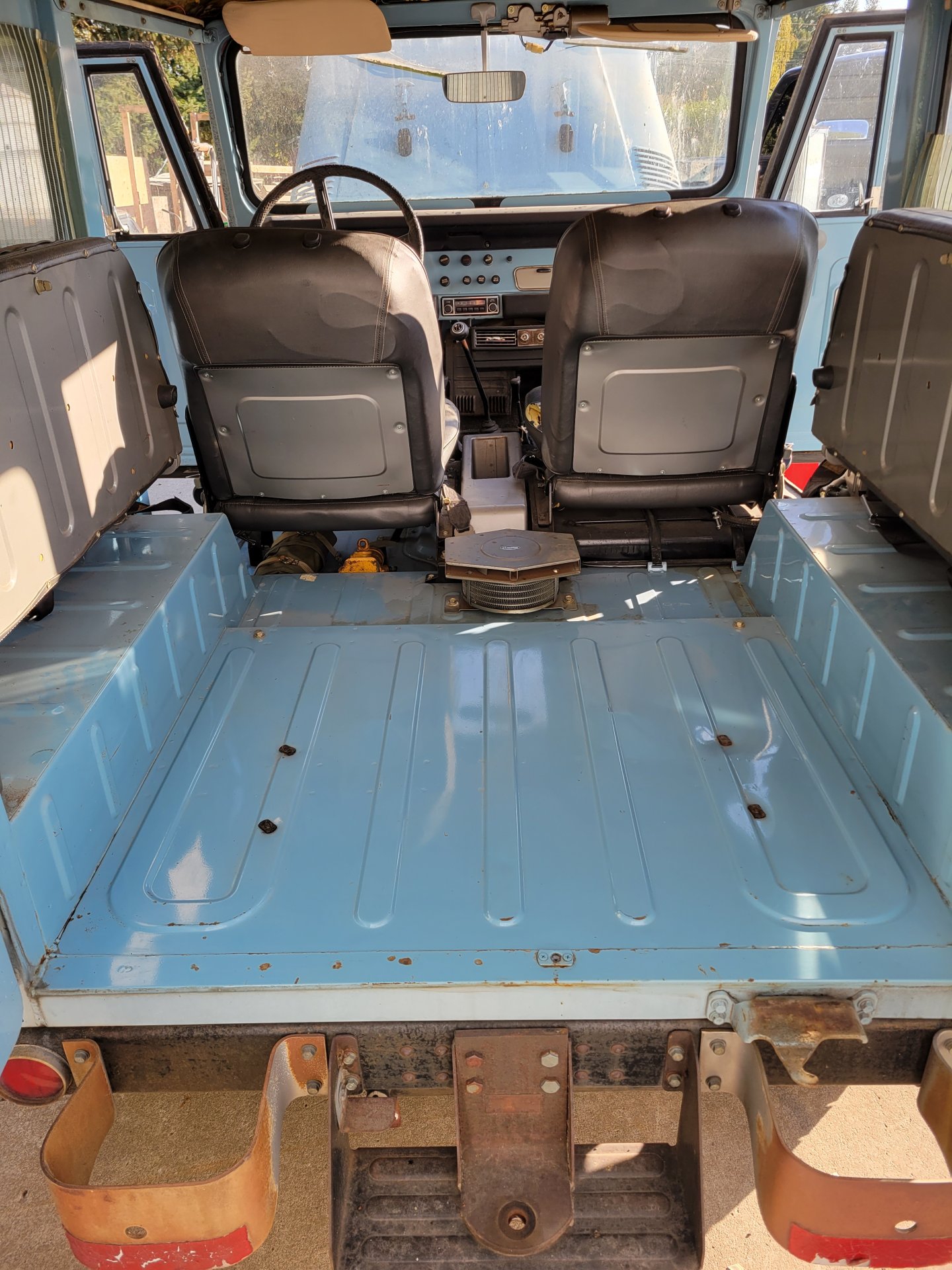 Looks awesome! Was it an advertised find or just driving by and knocked on the door?
1970 FJ40 - 1F and 3 on the tree, Mini-truck disc conversion, FJ80 booster master cylinder, 2.5” Procomp with Bilsteins. 33x10.50 General Grabber X3 on stock wheels. Trying to look as cool as I can with 2 carseats.
A

I work for the local phone company and was out on a service call. It was parked next to a garage on a dead end street here in town. I knocked on the door and asked if it was for sale and he said yes. The rest, as they say, is history.

adavis said:
I work for the local phone company. It was parked next to a garage on a dead end street here in town. I knocked on the door and asked if it was for sale and he said yes. The rest, as they say, is history.
Click to expand...

@Skreddy I just looked at your Avtar....your FJ and mine are basically twins!! I just ordered 5 new tires (31x10.5x15 MT's) and will be getting the wheels powdercoated factory grey. Yours looks great but I'm assuming those are 33's and you have a 2 inch lift, right? I was bummed that my rear fenders had been cut but then the white fender flares started to grow on me. I actually think the white fender flares look alright with the white roof and kinda break up the Capri blue in a nice way.