After a bit of wheeling at the weekend the center diff seems to have failed on my 2001 UZJ100. I noticed while turning round on a car park at the beginning of the week the transmission was binding up and then it would give a bang that shook the car! I checked the centre diff actuator out and worked the lock gear by hand but that is fine. So then I disconnected the front drive shaft and with the transfer in neutral and the center diff unlocked I can turn the shaft almost a full turn and then it binds. I can force it past that point with a bar and repeat.

I've left the front drive shaft off and am driving with the center diff locked while I wait for a replacement transfer box to be delivered next week. Once I have them swapped over I'll strip this one to see exactly what's busted but I'm expecting either the pinion or side gears are damaged.

At the moment I'm putting it down to crossing some logs on a man made obstacle (positioned to catch both axles at once etc) with the centre diff unlocked, letting the traction control do its thing and ending up rocking back and forth a few times quite violently as the ATRAC tried to make it's mind up what to do (I'm used to a fully locked 80 and was experimenting!). That and the added gearing of 36" tyres must have been too much for it. I guess in future I should make sure the centre diff is locked before I push it but this is definately a bit of a let down after being used to an 80 and not breaking stuff so easily.

Any signs of 100's being prone to weak transfer box center diffs?

So the center was unlocked while you were on the obstacle?

Trunk Monkey said:
So the center was unlocked while you were on the obstacle?
Click to expand...

Yes, that's correct. Dumb move on my part it seems. It's a 2001 with ATRAC so I was focused on how that performed and forgot all about locking the center.

There was quite a lot of rocking back and forth as the vehicle would move up the logs to a point where it lost traction, start falling back and then ATRAC would kick in and we'd lurch forward again. Repeat a couple of times and then I gave up. I did have another go later with the center locked and it wasn't a whole lot different!

Axle lockers definately won in this senario, the locked 80's had the same problem with traction but were using more momentum to get through. I was trying quite hard but maybe more momentum would have stopped the ATRAC bounce bounce bounce

I'm guessing at some point the engine was driving one way while one of the axles was still being turned backwards by failing to get up a log and it all got a bit much for the centre diff. Locked it might have just taken something else out instead

The replacement T-case was delivered just now, ahead of schedule so I may get it swaped over and get a look in the damaged T-case this weekend.

It could just have been a one off, weak component, something like that but time will tell if I kill this next one.

I'd be surprised if you damaged the center diff with it unlocked. It may be the actual gears in the t-case. 36" tires are big tires to turn for the CV's and driveline.

Trunk Monkey said:
I'd be surprised if you damaged the center diff with it unlocked. It may be the actual gears in the t-case. 36" tires are big tires to turn for the CV's and driveline.
Click to expand...

My reasoning is that in a straight line there is no binding but turning quickly binds up as if the centre is locked. If it was an 80 with a VC I'd have suspected that but AFAIK we don't get a VC on the 100 TC. It seems when there's a difference in speed between front and back axles I have a problem ... Seems like it must be either the centre diff itself or something catching on the locking mechanism but never having had one of these apart I can only speculate until it's in bits on the bench.

I ran 36's on my 80 for a long time without issue and apart from being IFS up front I was expecting the 100 would be just as tough mechanicaly. These logs were tricky but by no means were they at all extreme

Why do you think it isn't a front diff? These ARE a know weak spot on 100s and break on nearly every 100 that gets wheeled.

If your center diff did break, it will be the first I've heard of in 10 years.

I probably haven't explained it very well but with the front drive shaft removed, I can turn the front T-case output flange almost a full turn then it binds, it should just go round and round. Another give away is that still with the front shaft removed, center diff unlocked, engine running, put it into gear and it goes clonk clonk bang until I lock the center diff so definately not front diff

From reading on here I was prepared for blowing the front diff and ARB'ing it when it happens but blowing the center is a bit of a surprise.

When I get it apart I'll report properly on the damage. It *could* just have been bad luck never to be repeated but I plan to repair the broken T-case in case I have a repeat performance. I'll also look to see if the failed parts would have benefited from cryo treatment before I rebuild it. If I can get near an 80 series T-case I'll be measuring that up as well

If you bought the 100 used, it is actually possible that the center diff was already partly damaged by the previous owner. The center diff lock button is easily bumped with a knee if you aren't careful. A center locked diff on pavement is murder on your drivetrain, so that could have been a contributor to the problem. As another said, I have never heard of anyone having a problem with the center diff. I'll be interested to hear your findings. Very strange indeed.

I bought it used in August last year but this was its first real wheeling test, so prior damage is entirely possible. Up until I realised there was a problem on the car park, I'd been pleased with the way it went at the weekend so I'd settle for prior damage rather than weekness any day! The other thing I need to deal with is changing the AHC spheres because it was super bouncy on the bumps but I already have the parts on the shelf for that. That also could have been a factor in how much load was across the centre diff.

After what I have seen the 100 do off road, I don't buy the center diff breaking from just what you told us. There had to be something done on concrete to bind it up bad enough to weaken it to the point it popped when you were off roading.

wildsmith said:
this is definately a bit of a let down after being used to an 80 and not breaking stuff so easily.

Any signs of 100's being prone to weak transfer box center diffs?
Click to expand...

The FZJ80 has the HF2AV transfer case while the UZJ100 has the HF2A t-case. AFAIK (somebody correct if I'm wrong), they are basically the same except the HF2AV has the added viscous coupler at one end. The part-time 4WD 80 series also use the non-VC, HF2A.

I finaly got chance this afternoon to swap in the replacement transfer box and take the old one apart. One of the centre diff spider gears has lost a tooth, all the way to the root though, not just a bit of tooth. There's a side gear with a bit missing and general signs of binding when fragments have gone where they're not welcome.

On the gear that lost a tooth, there is no other damage, e.g. adjacent teeth show no signs of damage and the gears it interfaces with are aok. With the tooth loss being total I'm wondering if this was just a faulty part. Seems strange that it wouldn't take another tooth or just a chunk of tooth.

I blew my front diff at Yankee Toy's Fall Gathering... Not good. Got towed out of the woods by a nice 40.

Toyota in NH replaced the front diff, then went to tell me after installing a new front diff, the center was effed and the rear was squeaking, which it was. $$$$

They found a used CD and I drove back to NYC with a chirping rear.

Bayridge Toyota replaced my rear diff gratis, minus labor because I bought the truck new there in 02. 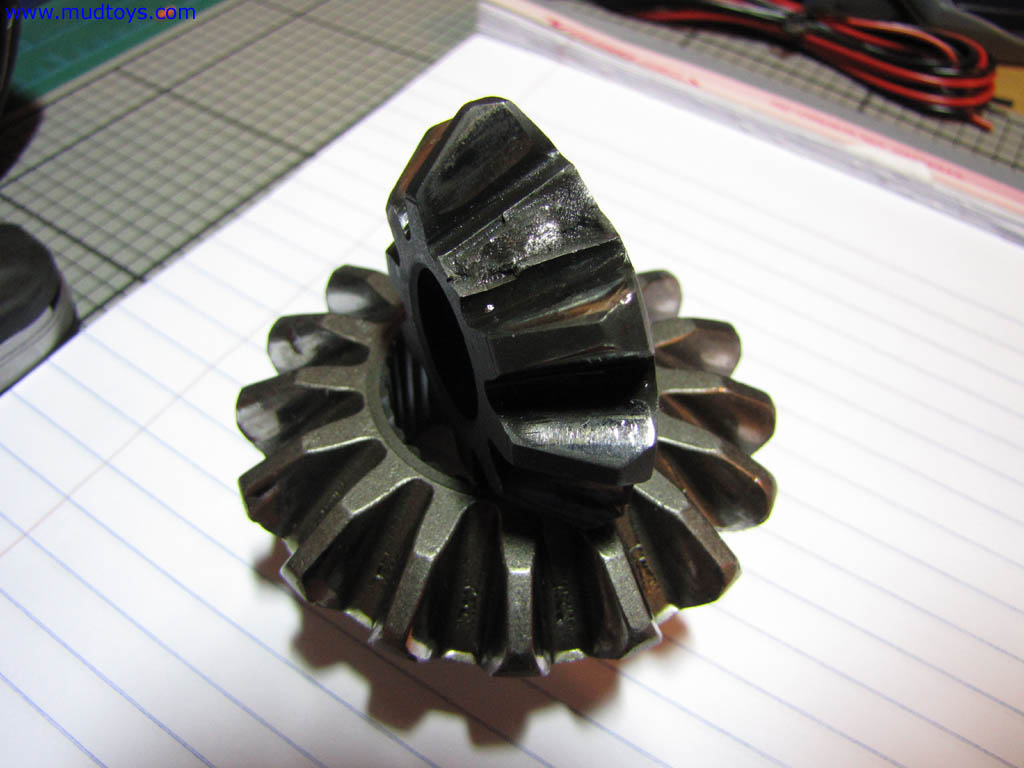 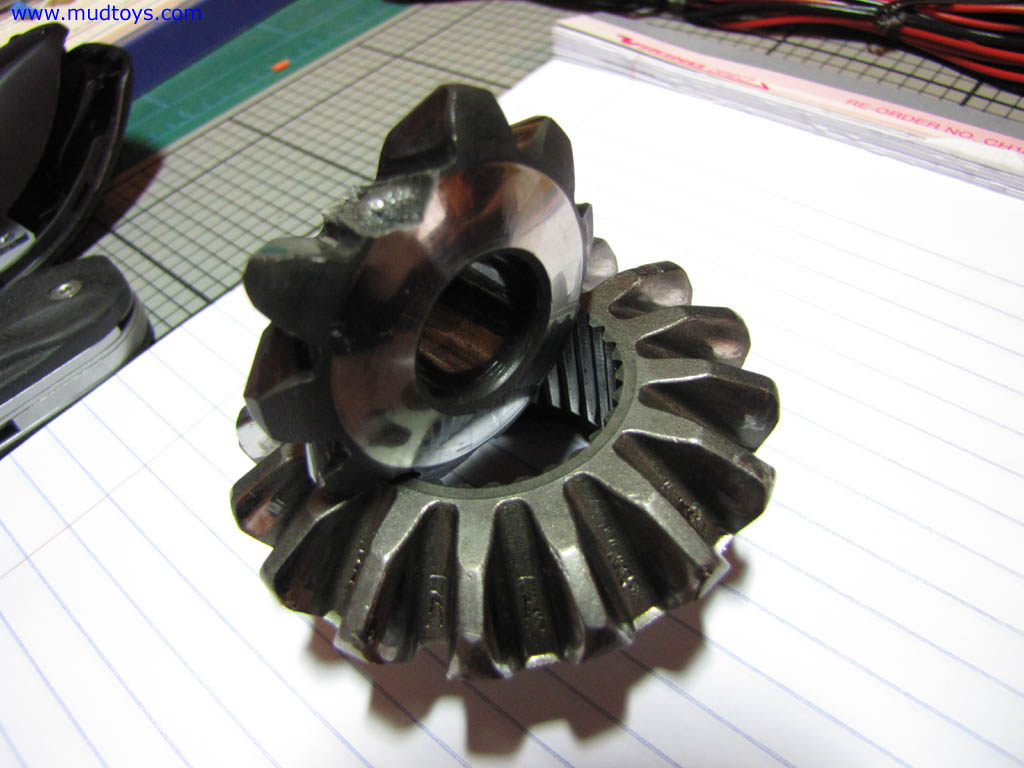 I think I'll have the spider and side gears cryo'd before I put it back together!
L

I blew my front diff at Yankee Toy's Fall Gathering... Not good. Got towed out of the woods by a nice 40.

Toyota in NH replaced the front diff, then went to tell me after installing a new front diff, the center was effed and the rear was squeaking, which it was. $$$$

They found a used CD and I drove back to NYC with a chirping rear.

Bayridge Toyota replaced my rear diff gratis, minus labor because I bought the truck new there in 02.

you should just wheel your 60 from now on......much cheaper to repair.

and how the hell did you toast your rear locker?

There is something funky about the side wear on those teeth. They are all pitted and scuffed up. Leads me to think that there is more to this stroy that you may not be aware of - perhaps PO abuse?

knorrena said:
There is something funky about the side wear on those teeth. They are all pitted and scuffed up. Leads me to think that there is more to this stroy that you may not be aware of - perhaps PO abuse?

The markings in the root of the side gear teeth are all the same and look like they were made that way but there are marks on the teeth as well. Your post made me inspect that side gear more closely and now I see several teeth have hairline cracks right through. Trouble is I can't tell if that's a result of the same event that took the pinion gear tooth off or from having lumps of metal in places they were never meant to be. There are no big lumps of metal, just fragments so the tooth must have shattered rather than coming off as a chunk. No idea if that tells me anything useful either though.

I'd better check the other side and pinion gears for cracks as well but these make it seem more like just plain too much load on the diff and I should get this one built back up ready for the next breakage. Having said that, there were no big bangs while I was wheeling and thinking about it there probably should have been for that kind of damage?

There goes my sense of front diff invincibility; I thought only the 2-pinions from pre-00 broke.

Oh well...
You must log in or register to reply here.

Foreign body in the rear differential

Yesterday at 11:35 AM
Christian