I've had long-standing trouble with code 21 in my 1988 FJ62 that I finally decided to approach systematically and mostly due to all the accumulated wisdom from others on this forum I was able to solve it today. Background is that for the last 10 years or so the check engine light would transiently illuminate when under hard acceleration. As soon as I let up on the gas, the light would turn off. I would always find code 21 for #1 O2 sensor. I replaced both O2 sensors but no change. Over the years it slowly worsened, coming on more easily and sometimes staying on although invariably did not come back on with an engine restart. Still always code 21. The truck always ran pretty well and except for a failed fuel pump recently was doing well for having 230k miles on the original engine.

About six months ago the check engine light came on immediately after starting and stayed on. Still only code 21 and would come back immediately after clearing the code. Since it was still running well I just lived with it knowing that I would eventually need to get it fixed before my required CA smog check. Finally decided to try to solve the puzzle and started studying my factory service manual and searching every thread I could on both the 60 series and 80 series forums. Here's the story:

I didn't think the #1 O2 sensor was the issue but I pulled it off and tested the heater resistance between terminal +B and HT on the O2 sensor connector. Came in within spec at 6.0 ohm. On the truck side connector I confirmed I had 12 volts at the +B wire (yellow with red stripe) so it seemed like the heater circuit was probably not the issue. I did the FSM procedure to check the O2 sensors (shorting terminals TE1 and E1 while connecting my digital volt meter across VF1 and E1 on the check connector) and while it would probably have been easier to count the voltage fluctuations with an analog meter it seemed to be more than 8 times in 10 seconds. I was stumped.
P

If there was one take-home message from all the threads I read , it was to check the wiring for problems. Starting at the O2 sensor connector end I started stripping off the electrical tape and plastic sheathing. I found something that seemed unusual: 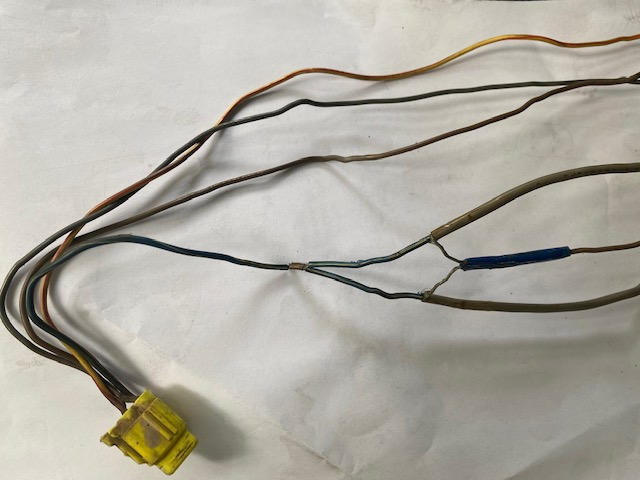 Near the connector there were four wires, +B (yellow with red stripe), E1 (brown), HT1 (gray) and OX1 (blue). What seemed odd to me was that the blue OX1 sensor wire then split into two blue wires, each of which then entered a gray wire within which they were surrounded by wire shielding. The shielding was connected to a separate wire that joined the others in heading toward the ECU.

My first thought was that this was a repair job done by someone in the past and might have failed somehow. However, more reading and examining the wires more closely suggested that this was how it came from the factory. I continued exposing more of the connector wires until they started to disappear behind the intake manifold and join a larger harness. All of the wires I exposed looked fine without any obvious areas of damage or discontinuity.

At this point I turned my attention to the the HT1 (gray wire) and I decided to confirm that there was continuity from the yellow O2 sensor connector to where it ultimately terminates at the ECU. It seemed like a long shot but I connected the leads of my voltmeter to the each of these two ends of the gray HT1 wire and tested the resistance. To my surprise there was infinite resistance, i.e. the two ends of the wire were not in continuity indicating there must be a break in the gray wire somewhere.

At that point I went ahead and fashioned a jumper wire out of a length of 18 gauge wire in order to connect the O2 sensor connector and ECU directly, bypassing the existing gray HT1 wire. I reconnected the O2 sensor, put the EFI fuse back in, turned the key, started the engine and........ no check engine light!!! I test drove it and the light never returned, even under hard acceleration.

So it looks like it was the heater circuit in the O2 sensor that was triggering the CEL due to the gray HT1 wire having somehow broken on its path from the sensor connector to the ECU. The yellow/red +B wire that is the other side of the circuit was fine, delivering 12 volts to the sensor.

The question left for me is whether to tear into the wiring harness in order to find the break (which seems like it will be a hugely difficult job and maybe even require removing the intake manifold) or whether I just create a more permanent jumper wire and run it separately through the engine compartment to the O2 sensor connector. Although it is not as elegant a solution as fixing the broken wire, it seems a lot easier and is what I am leaning towards. Any thoughts from others on this?

Anyway although there are many other posts on code 21, I am hopeful that someone in the future might find this one helpful. Thanks.
Last edited: Sep 12, 2020

Good explanation. I'd run a separate wire, loom it and label it, and if you ever pull the engine or harness down the road, fix it more properly then.
You must log in or register to reply here.

Has anyone solved the FJ62 stereo mounting bracket dilemma?