Camping on the Verde River (1 Viewer)

A couple CSC guys will be camping on the Verde River the next couple of days at Sheeps Bridge. Leaving today
PM for details if you are interested

A coyote tested positive for rabies in Tonto Basin, and also received a phone call from the AZ Department of Health of a probable rabid bobcat. The bobcat attacked a teenage boy February 22 along the Dutchman Grave Trail #22 near Sheep Bridge (CCRD) in the Mazatzal Wilderness Area. The young man killed the bobcat, but the carcass was not recovered so it couldn’t be tested. The AZ Department of Health said the way the cat latched onto the boy is consistent with a rabid animal attack. Tonto employees are asked to notify Mr. Fink, with the AZ Department of Health at 602-364-3853 and AZGFD if we come across any carcasses as rabies is likely spreading through the area.

Had a coworker get stalked by a rabid coyote and when it came charging, luckily he was carrying a 22 rifle hunting rabbits. it took several shots but scared the crap out of him. LIke he did, it is always advantageous to bring the carcass if ever bit for medical reasons.

So you guys aren't happy enough that people are afraid to go to Mexico, now you want the Tonto Basin to yourselves too?

Funner said:
So you guys aren't happy enough that people are afraid to go to Mexico, now you want the Tonto Basin to yourselves too?

Very much so, took the family away for spring break

. We going hunting for rabid animals next week?

Thanks for the information. Good to know. It is funny, but if you travel with kids. Mine are 4 and 7 with no fear of anything, so it is nice to have these kind of updates.

jclarke450 said:
Thanks for the information. Good to know. It is funny, but if you travel with kids. Mine are 4 and 7 with no fear of anything, so it is nice to have these kind of updates.
Click to expand...


Plus those who like to bring along the four leg member of the family.

Phil and I left for Sheeps bridge at 4:30 and made good time arriving with plenty of time to set up in daylight. Still stopped to take a picture of one of the best specimens of a crested Saguaro around. Still there and looking healthy! 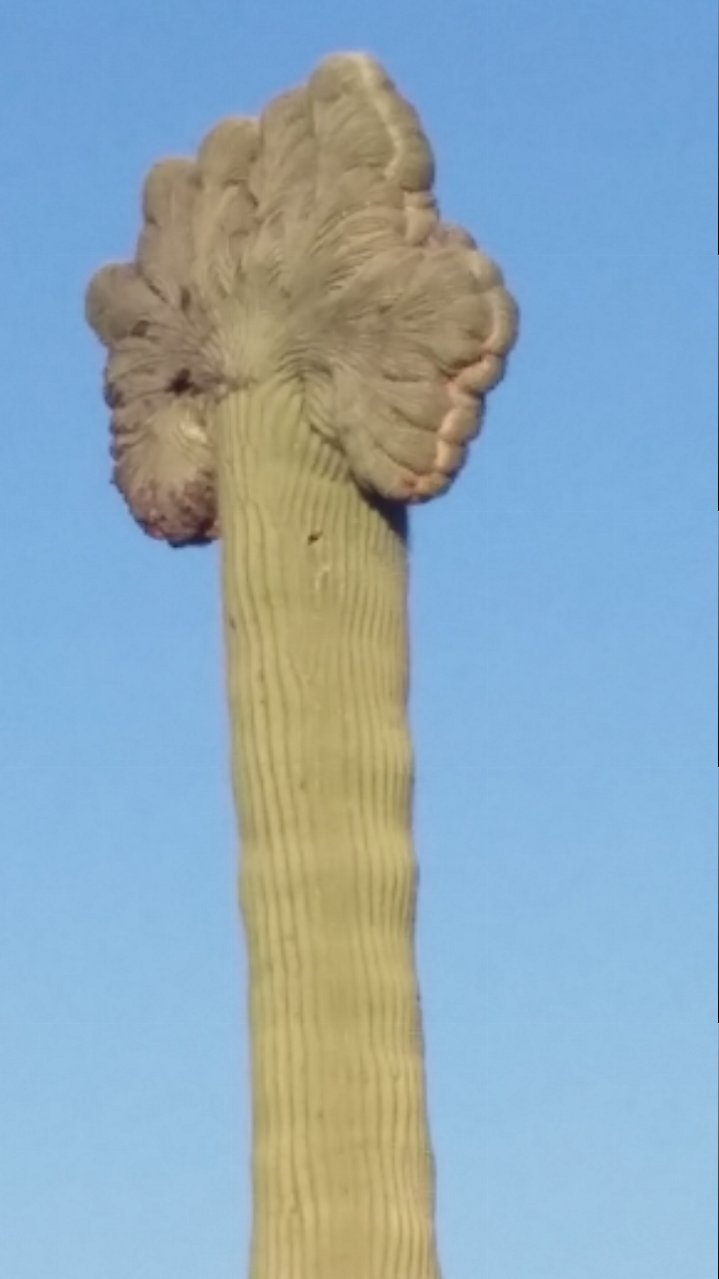 picture of the bridge ( taken the next afternoon), We camped in the clump of trees straight across from the big rock outcropping. 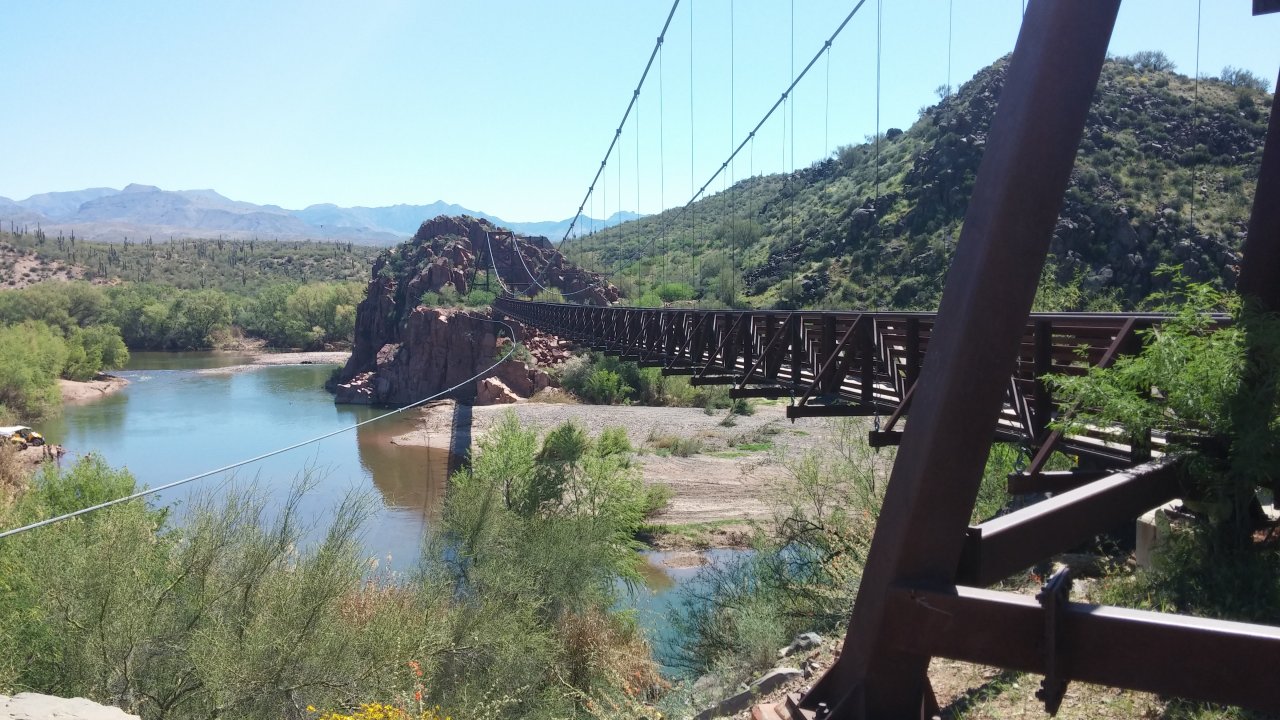 We came in from the BArlett/horseshoe side and needed to cross the river . I went first, Phil got on the bridge and guided me on the line with directions through my open sunroof and had me avoid a large rock in the path. After Phil crossed we found the one great camping spot there was open (in a canopy of trees so plenty of shade). 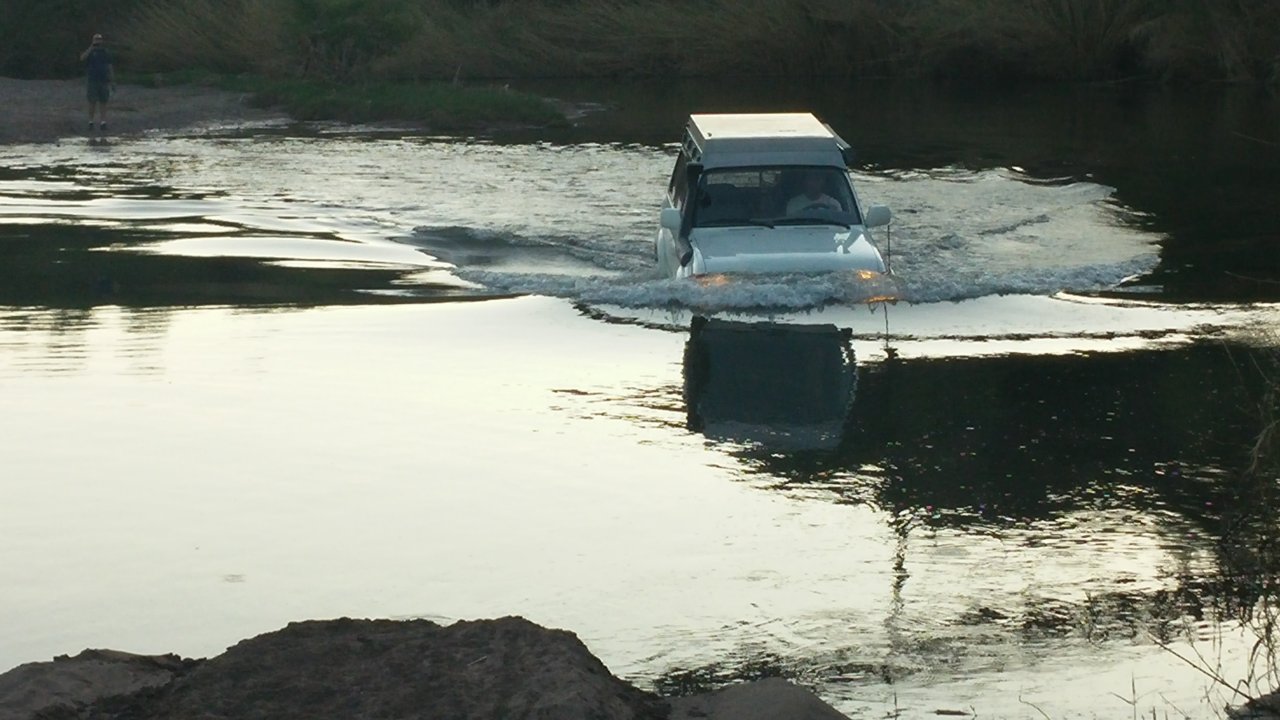 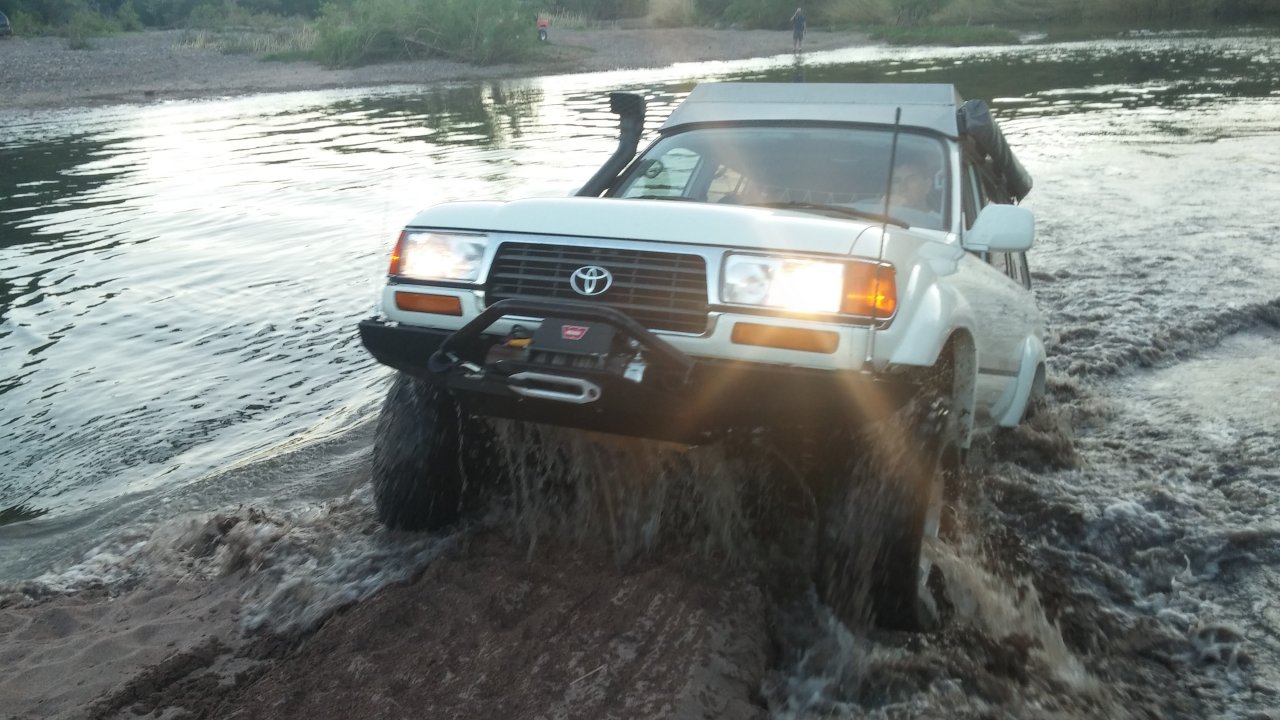 later that night we saw some headlights come up and heard voices of a group of guys and girls. we could see by the headlights and the outline of the truck it was a 60 series landcruiser. We walked over to the exit point to greet them on the other side in case it was someone we might know or at least chat with. without lockers the truck got stuck at the exit point. after a couple of tries, we told him to get out of the water as much as he could and we would retrieve our 80 to pull them out. By the time we got back he had kept trying which meant he lost ground and was sitting in deep water. everyone got out and walked to the shore at this point. We hooked them up to my truck and pulled them out.

They opened the doors and water came gushing out for several minutes. I heard Phil yell out to them "don't let the fish out!"

. They were 3 local guys and 2 gals from Australia and were a very fun and good natured group. we talked for quite some time. The driver just got done fabbing his own rear bumper and also just purchased a 40 series that he planned on getting running. 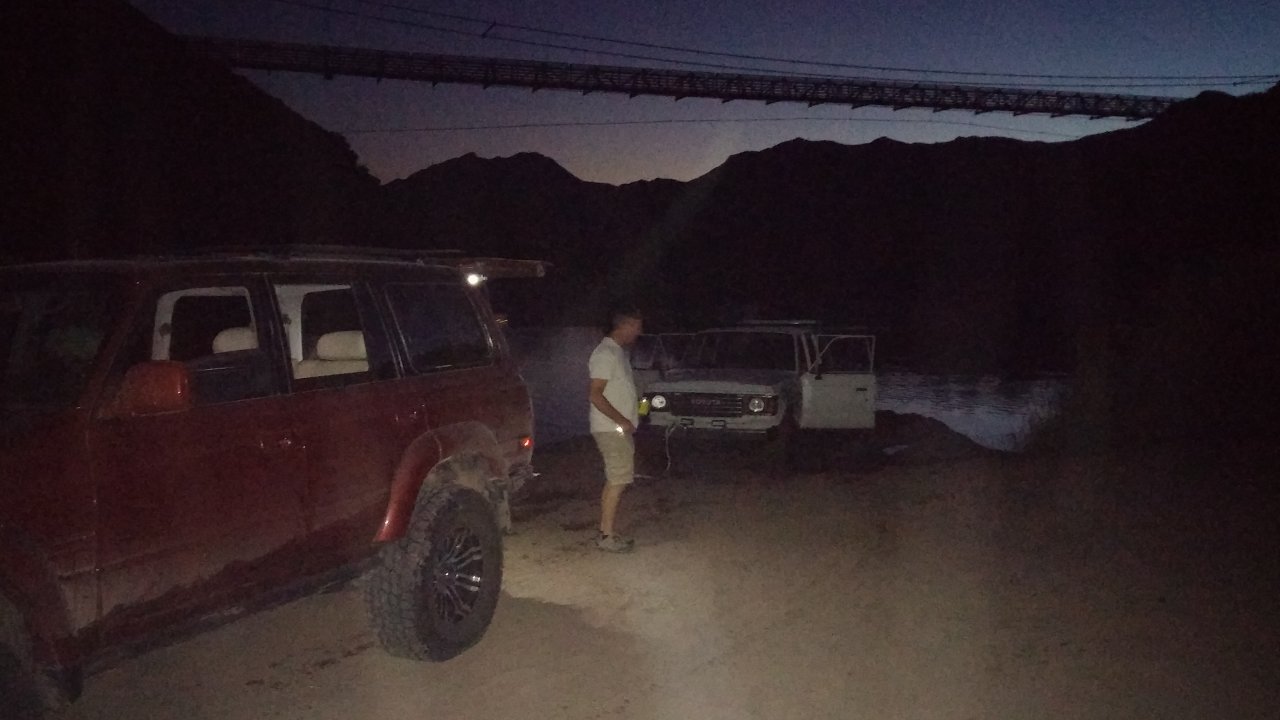 The girls, being from Australia knew something about 'Cruisers. The driver told me afterwards that when he saw the back of my CSC shirt when he got stuck that he knew he "was going to be ok and these guys will help". Cruiser Karma

We left them alone so they could continue their plans to go head out at the hot springs fed custom built hot tub. they giggled and laughed for some time and ended up driving away using the back road out instead of crossing again.

In the morning, I walked to the rapids with my cup of coffee and soon saw what looked like a snake whipping around in the water. I could see it was something moving under its own power and soon realized it was a river Otter that was playing like a little kid tossing, turning, and splashing all the time I was watching. It was his long tail I was seeing flipping about. It soon spotted me and swam a little closer where I took a bad cell pic of him. He stayed in the area and we both some him on and off later. What a character this guy was. 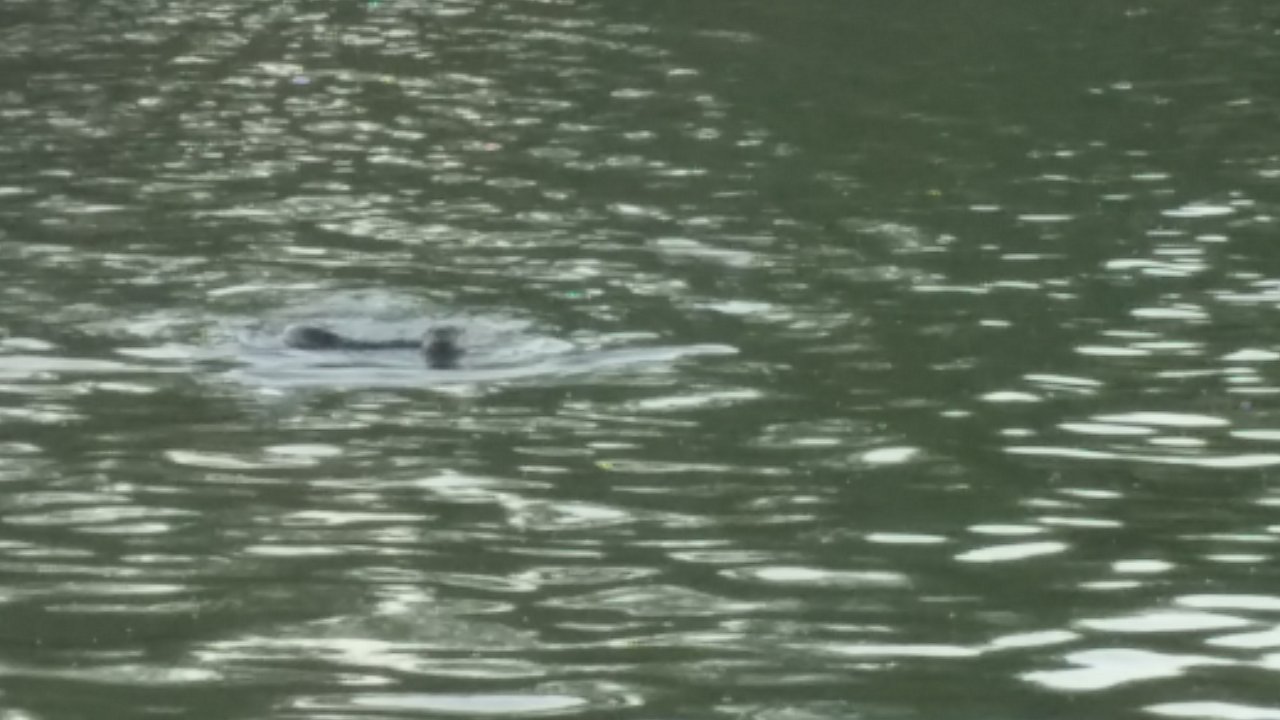 Came back into camp where we spent the day relaxing, hiking, and meeting people. We had to pull out a stuck Tacoma later and got a 6 pack in gratitiude 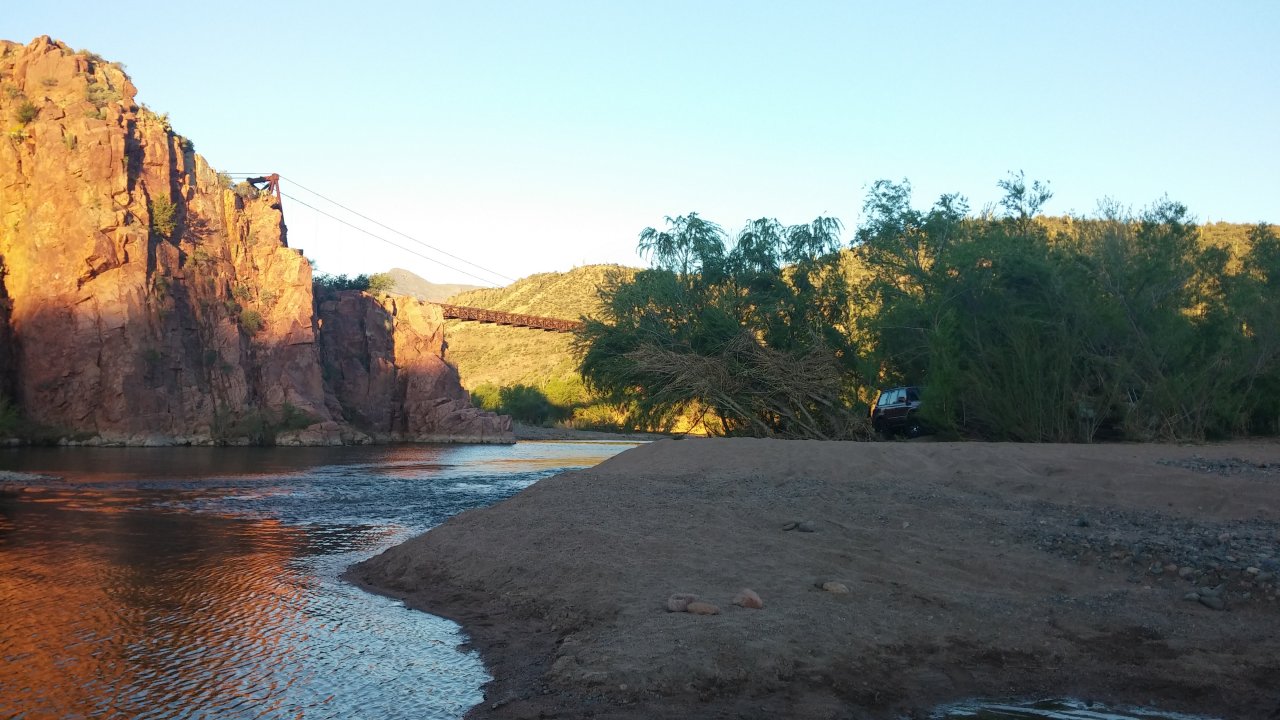 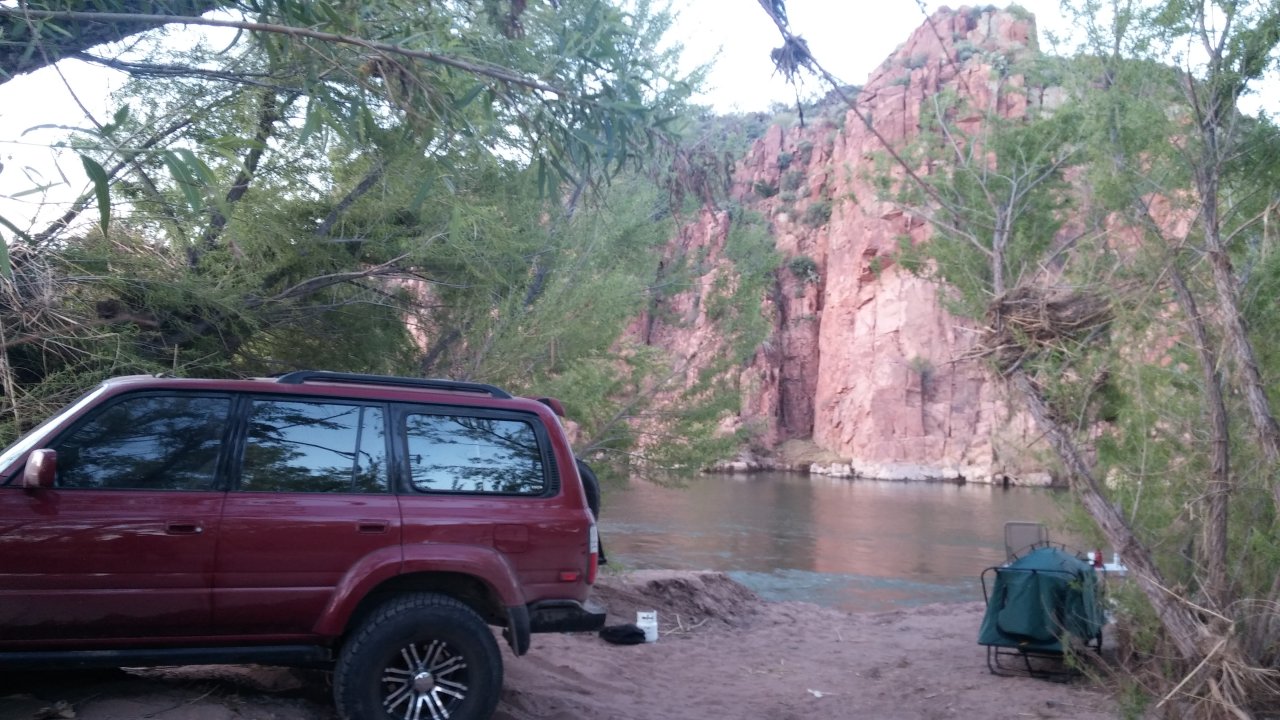 As we thought it got pretty busy from about Noon to 4pm - we were glad we had somewhere shady for our camp spot. 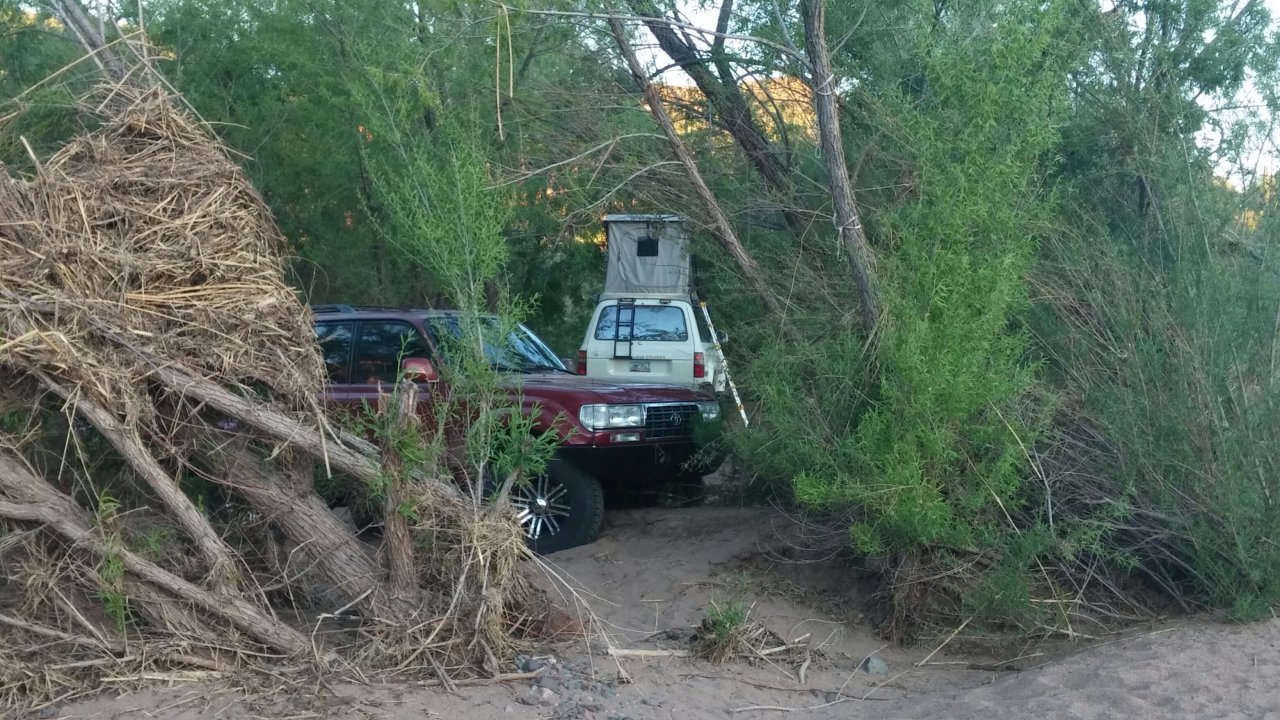 Finding new uses for the flip out windows 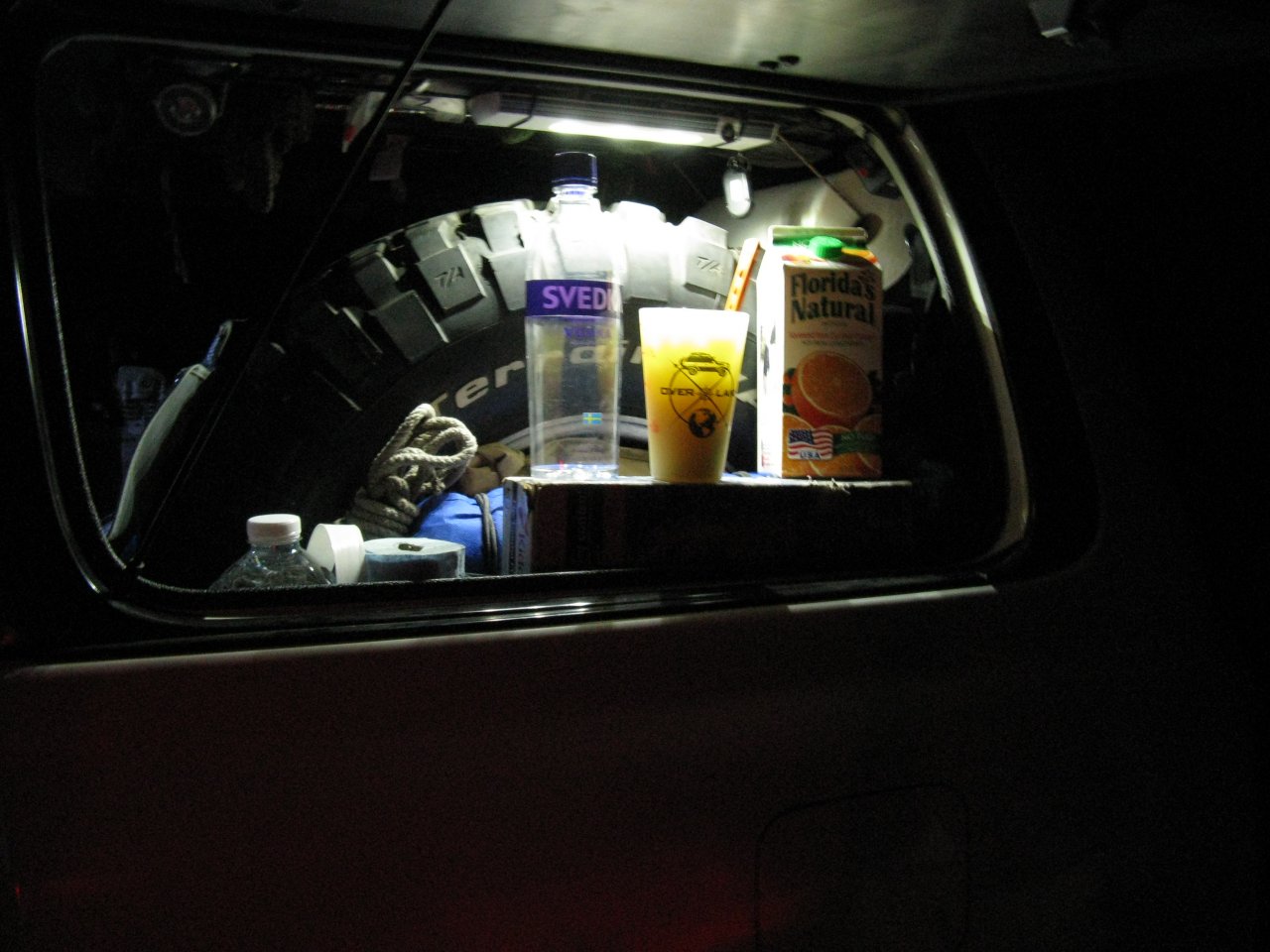 A view from the top of our stealth camping spot 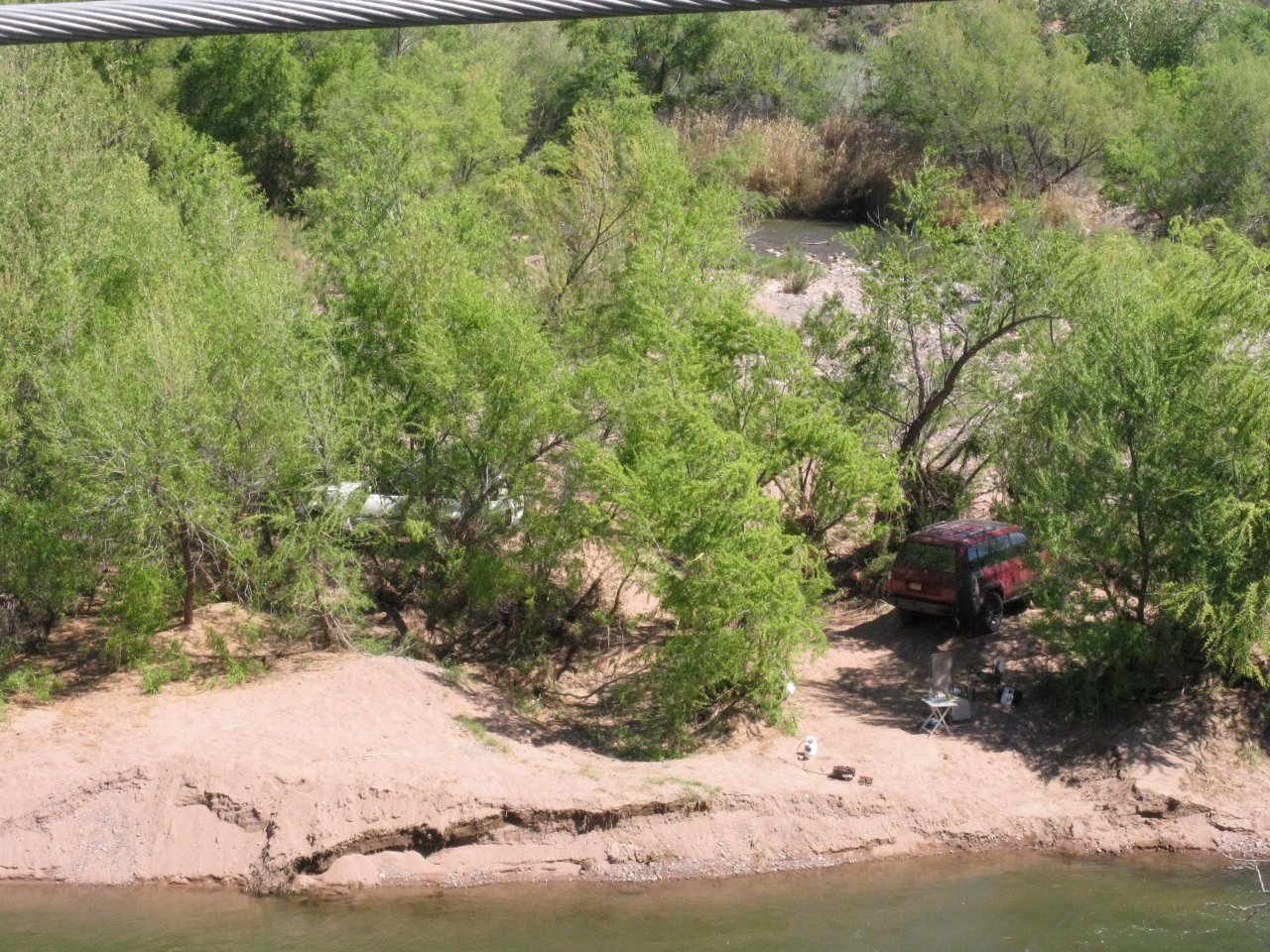 Was board after Murf left so I sharpen my fishing skills 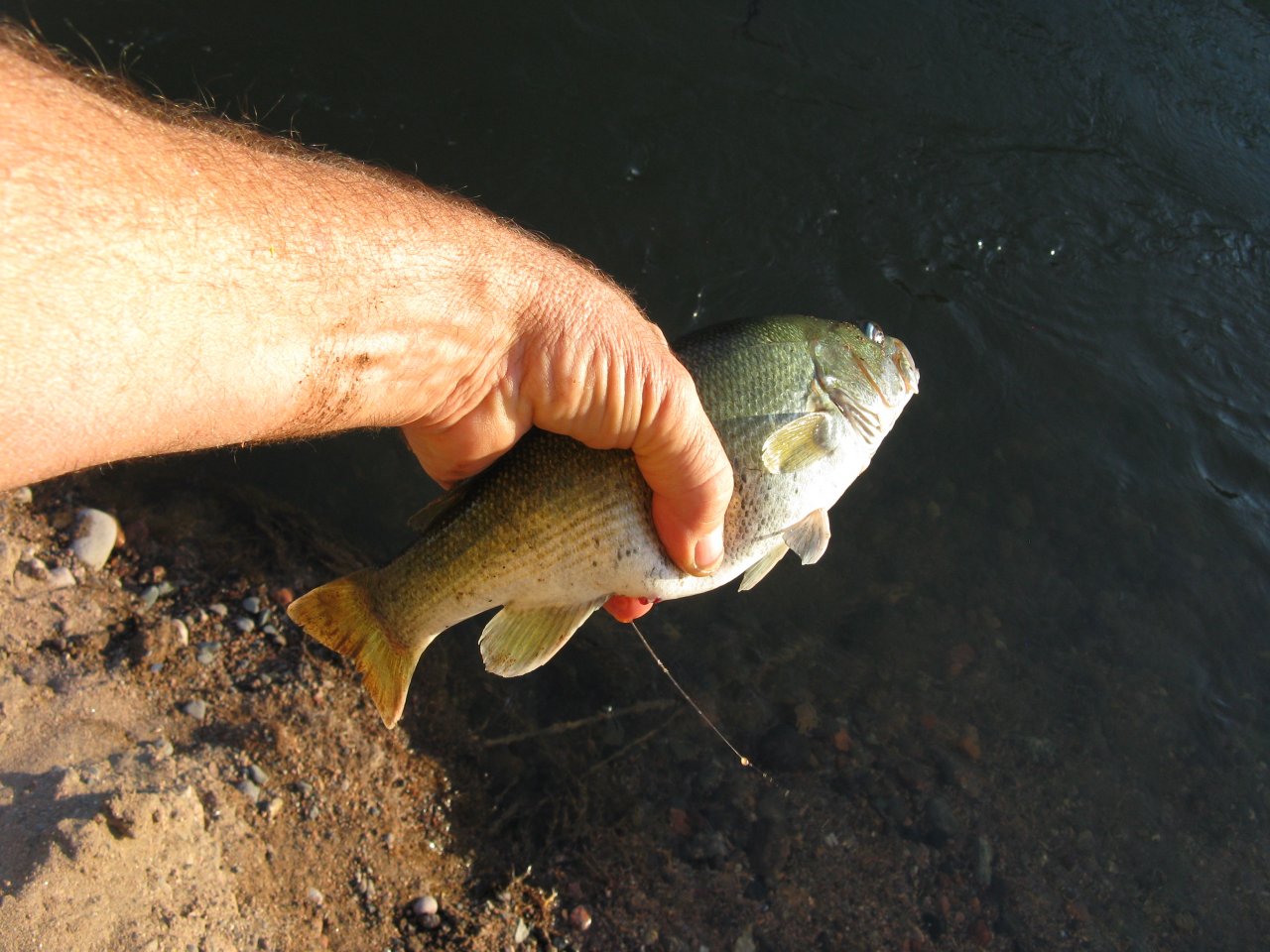 Arizona cactus are hard to beat 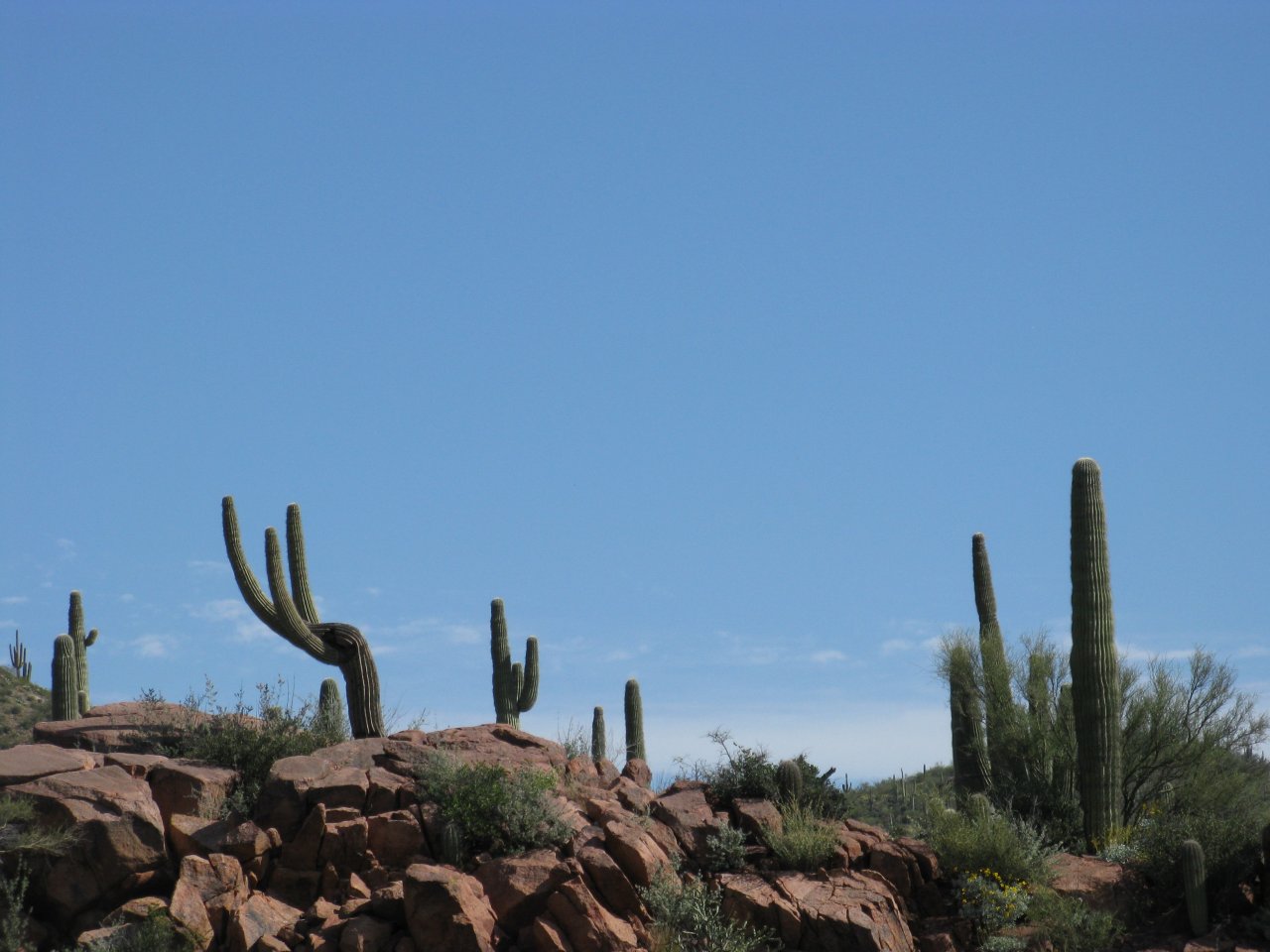 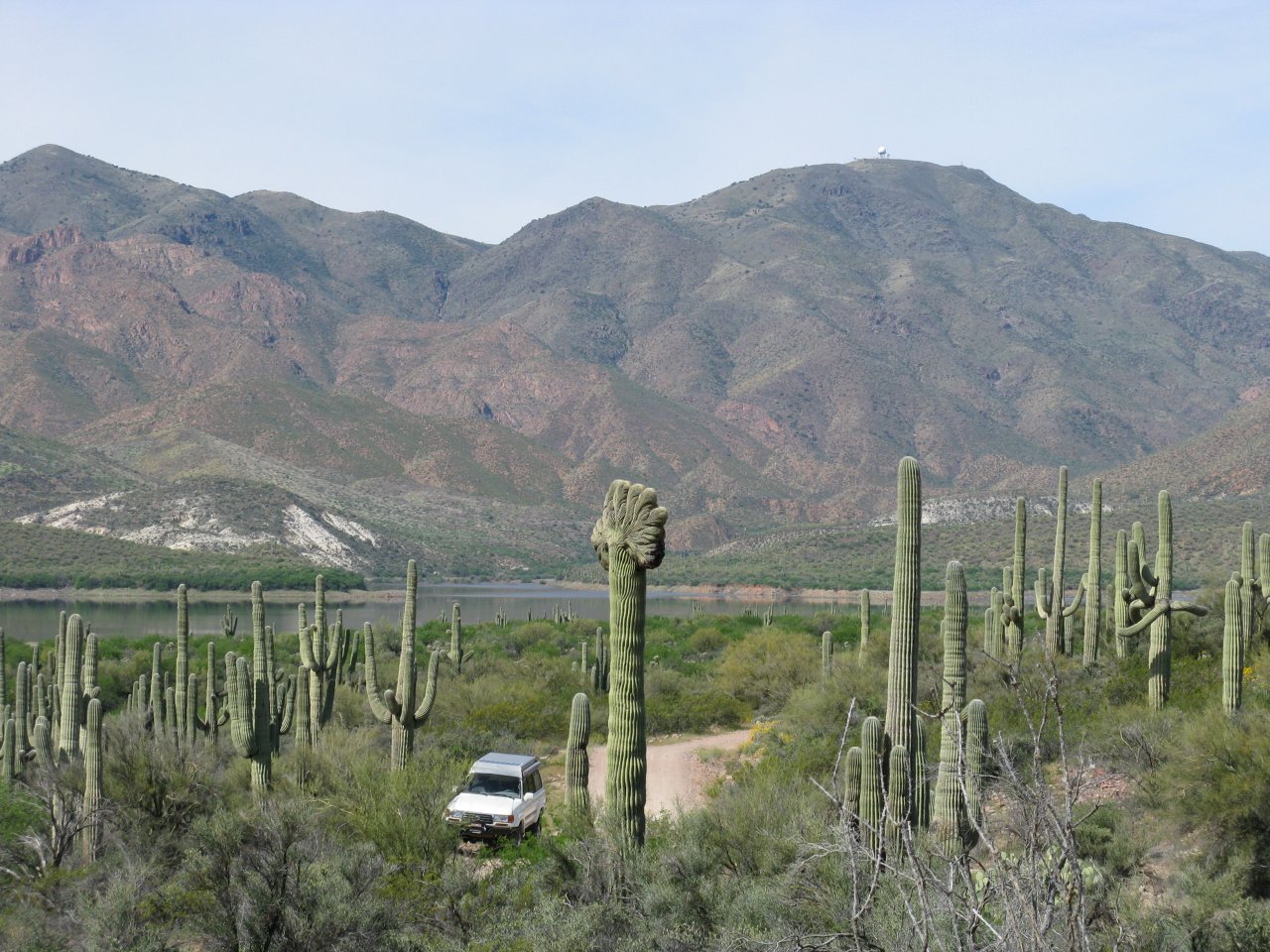 Thanks for the pictures - CSC to the rescue with a towing recovery service !!!!

very nice pics and great stories....i'am pissed that I have to return to Canada this week ..will keep in touch ...enjoy the summer

Good write-up - our camping season is just starting up.

No we cheated and used the propane ring with a lighter. Wasn't cold until late into the evening actually

the crested saguaro is a fine specimen

I need to get out with you guys... Great write up and cool integrated wet bar

you have there Phil!

That's a beautiful crestie. I need to get up there and shoot it. Awesome photos Murf.
You must log in or register to reply here.

Anyone Camping during Curfew?
2