I've been hanging around the board for about a year now, and its about time I post up a report. In the last 2 months I found the 80 that I wanted, a 1993, locked with 170k, perfectly maintained and never wheeled, for a price that I couldn't pass up. I've had my 60 for a year, and it was time to step it up to something locked and a little more comfortable.

Friday night I pulled off the stock hitch, and threw the spare in the back. Removed my running boards and all the mud flaps getting ready for Saturday's trip. I went solo up Coyote Canyon and Sheep's Canyon in Borrego Springs to try the truck out and see what it could do. My first mod on the truck was to pick up some 285/75 Dueler Revo's, and I was curious to see how they'd perform.

Without a doubt, the truck impressed me in every manner. It basically went everywhere I pointed it, with minimal effort. The tires gripped as well or better than anything I've used previously, and I couldn't be happier with them. I even got them into some super loose sand in the dunes by the Borrego Airport...if you know the area. The tires, even fully aired up, didn't dig in, just chugged up almost axle deep hills with no problems.

Highlight of the trip...leaving the canyon down a rocky wash, half way down I come around a corner and run into Cruiserdrew, Alvarorb, and some other mudders coming up. I gladly backed up and out of the way for them, 9 built cruisers in all! and watched the show as they cruised by with no problems. Apparently they were headed up to camp out and spend the night, too bad I had to be home for Saturday night, it sounded like a good time.

All in all, I couldn't be happier with the truck and the tires. I took a little damage to the undercarriage from rocks, and the front bumper took a hit on a steep dropoff, but other than that, everything fared well. Unfortunately (for my credit cards), the list of mods that I 'need' are all of a suddenly getting a lot bigger...ha! 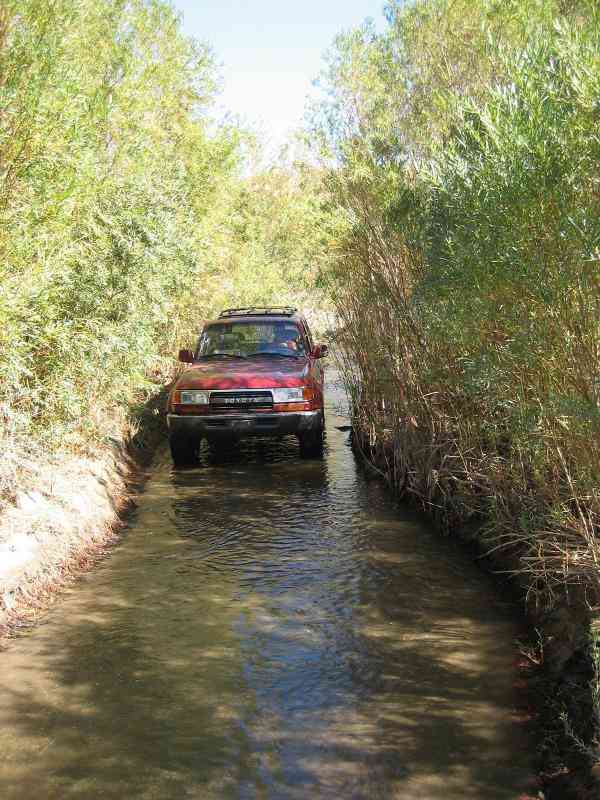 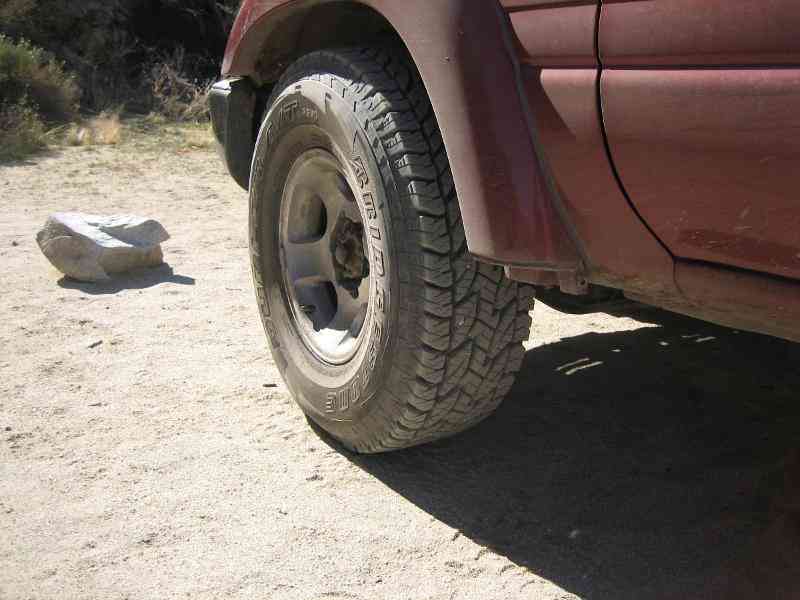 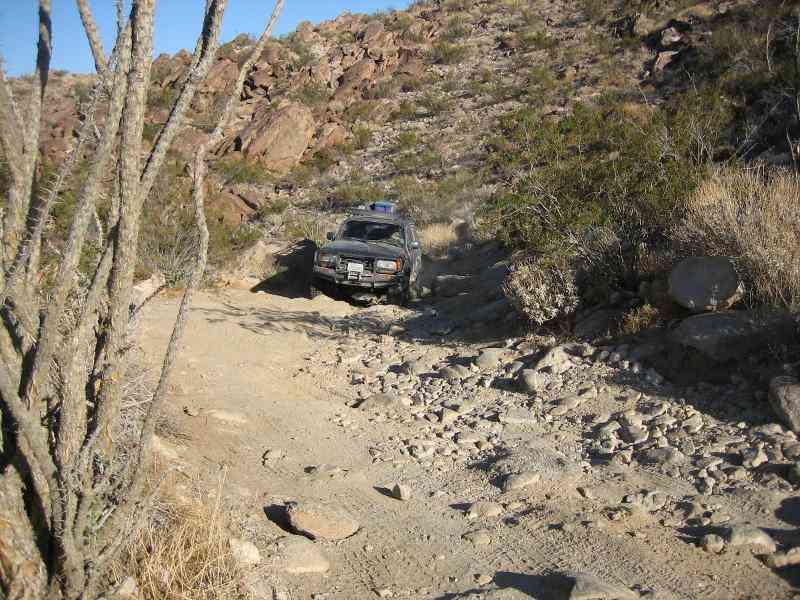 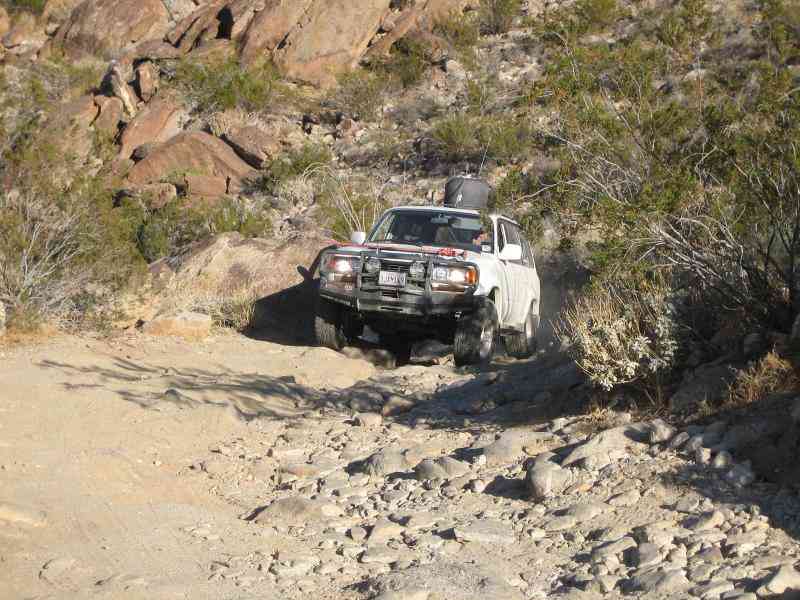 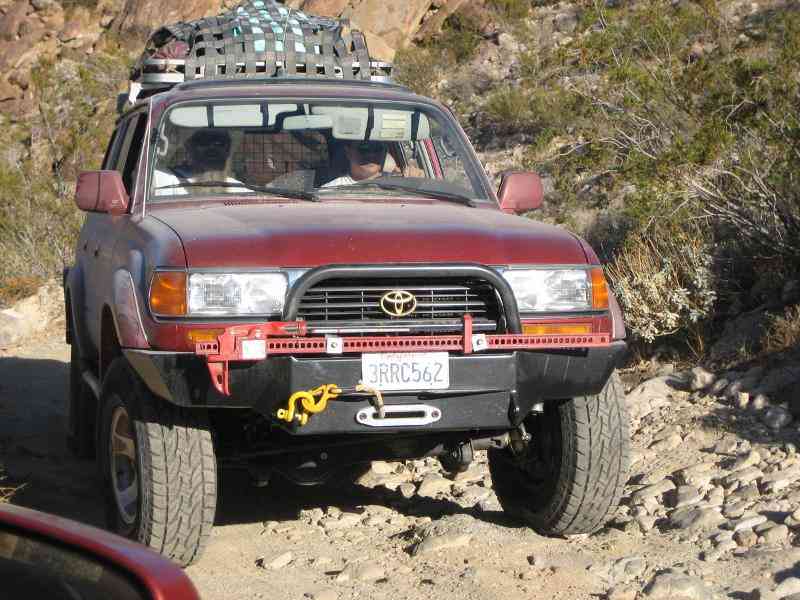 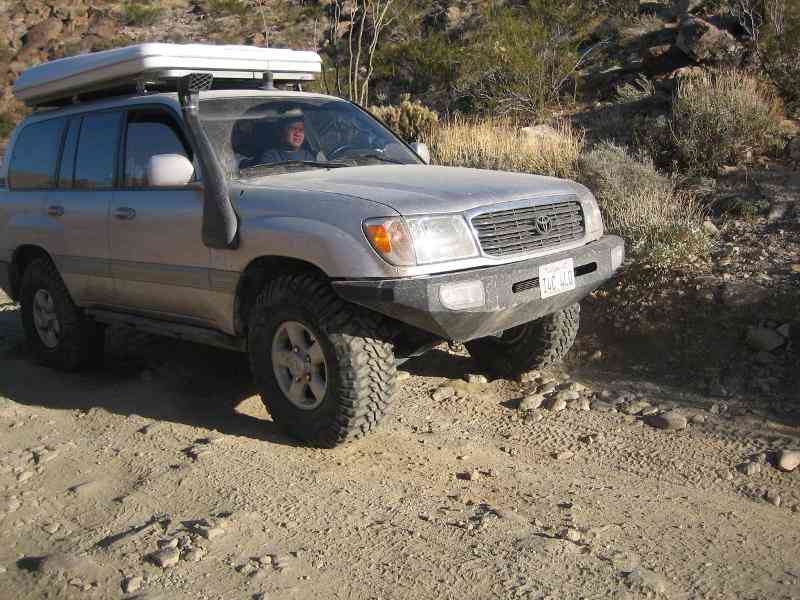 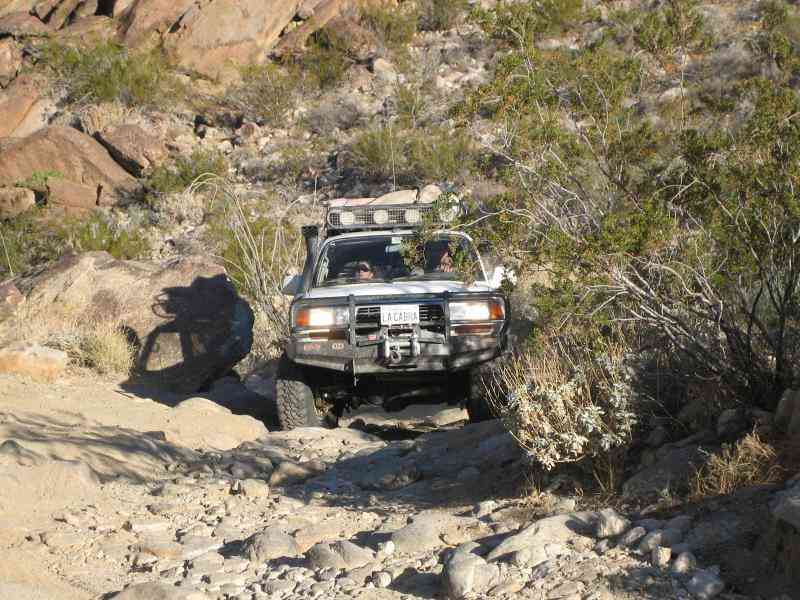 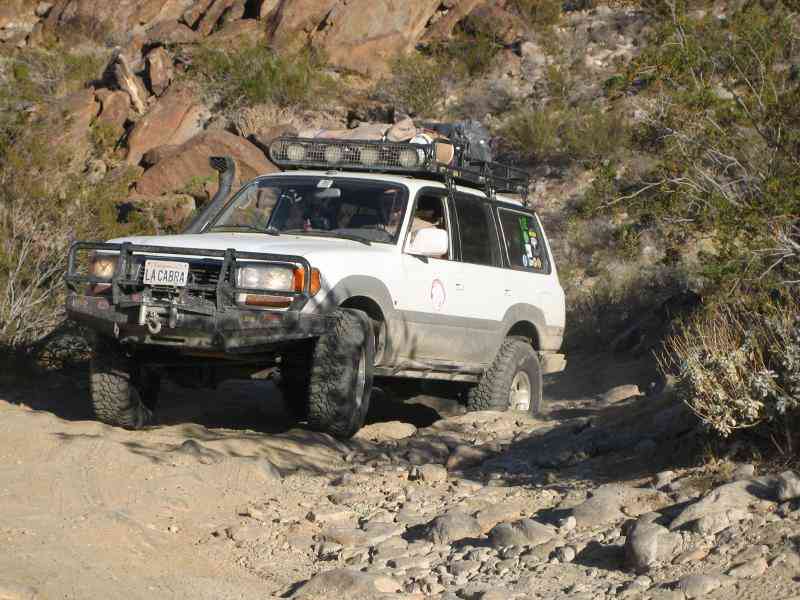 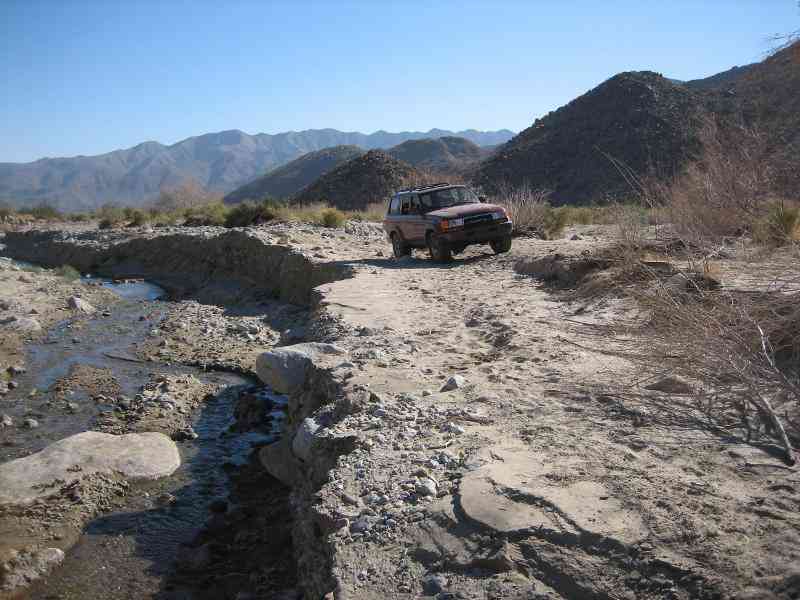 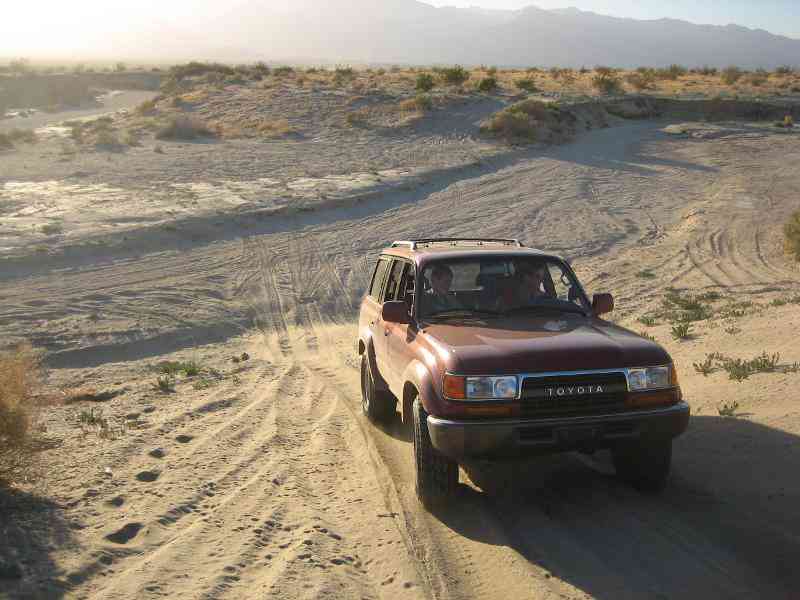 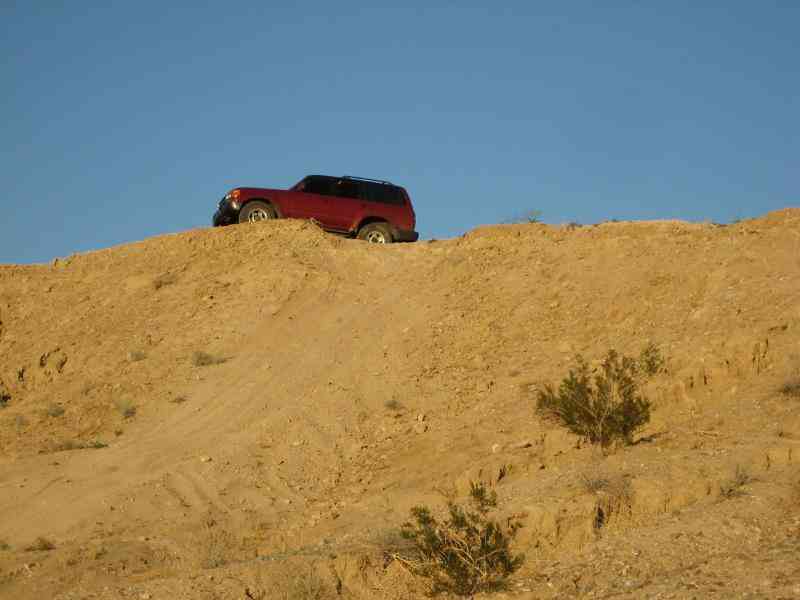 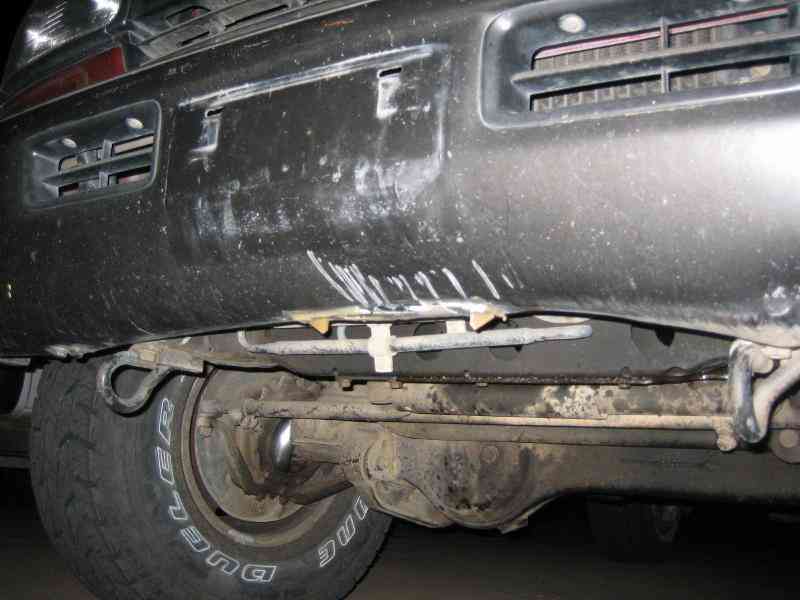 So, can you go all the way through Coyote Canyon like the old days? We used to travel it all the way and then some time about 1990 they shut it down permanently for sheep breeding (prior to that it was just a few months a year shutdown when the sheep babies were born).

So is it back open?

Nice pics, I really like the look of that slee bumper on the red 80

IdahoDoug said:
So is it back open?


No-The center section is closed, unfortunately. It was cool to run into Mars at the top of the climb. Funny to see a pic of my truck in another thread! We had a most excellent trip to Anza Borrego and hopefully Scott will post up some detail in the pics section.

I may have my names mixed up...but I believe you come up Coyote Canyon, and its really the only technical section of the trail. Its the wash pictured with all the trucks coming through. Once you get on top, you have access to the whole basin up there, where you can camp out for free, and there is a fair amount of other trails going up the various washes and canyons. Cool country, that's for sure. If you want to get up to the palm tree oasis in Sheep's Canyon, you have to do a little bit of hiking, but you can drive up to about a mile of it.

Sweet! Nice pics. I wanted to go on that trip, but alas...the schedule would not allow for it.

What're the odds of you running into that group of miscreants
Looks like you had a good trip.

Doc said:
Nice pics, I really like the look of that slee bumper on the red 80
Click to expand...


No doubt...that red cruiser is pretty close to exact for the build that I'm working on. Crazy to run into them on the trail, that's for sure. Is he anybody on the board??

Cruiserdrew said:
No-The center section is closed, unfortunately. It was cool to run into Mars at the top of the climb. Funny to see a pic of my truck in another thread! We had a most excellent trip to Anza Borrego and hopefully Scott will post up some detail in the pics section.


It truely is a small world. Glad you liked the tires Mars - I to had no issues the entire trip with my set.

Sign up Coyote Canyon said it's closed from June to September. Someone posted up some info on the NorcalWagon board regarding a legal challenge to the CA State Park Service closing this 'public' road and that they don't have the jurisdiction to do so.

June to September, eh? That sounds like how it used to be, which was all good. The sheep could have their babies in peace and the rest of the year we could drive through and admire them up high on the canyons. But this is February so it should not have been closed?? What's up with that?

Was down there myself Sunday. Started out at Carrizo on the S-2. Up through Arroyo Del Seco and down through the Diablo drop-off toward split mountain. Looking at the pictures, I knew exactly where you were.

I have the Revo's as well. Just over a year now. Great tire!

IdahoDoug said:
June to September, eh? That sounds like how it used to be, which was all good. The sheep could have their babies in peace and the rest of the year we could drive through and admire them up high on the canyons. But this is February so it should not have been closed?? What's up with that?


Doug, June to Sept. closure is for exactly what you state - to allow the sheep to mate in peace.

Don't know if that's the only closure of if there's another portion permanently closed.

Can you guys recommend similar areas East of San Diego like this that I should be checking out? I'm just discovering my 'backyard' aout here, and would love some advice. I haven't searched...but since you are all here...

Hopefully Scott (Echo_29) can chime in, but my understanding is that the center closure is permanent-ie no through traffic ever. There is also a seasonal closure of the entire canyon for the sheep to breed, we passed the gates for that in the lower canyon.

Here's the text from the post on the Norcal board concerning the Coyote Canyon closure:

CORVA is a partner with EcoLogic Partners, Inc.

Over Closure of Coyote Canyon Road

On Wednesday, November 16, 2005, EcoLogic Partners, Inc., a non-profit
corporation that involves itself in controversial land use matters in the
western United States, filed suit in San Diego County Superior Court
against
the California Department of Parks and Recreation ("State Parks"),
alleging
that State Parks illegally closed a 3.1-mile segment of Coyote Canyon to
motorized vehicles, and that the closure constitutes a continuing public
nuisance that must be abated.

The complaint, which also lists two individuals, Jim Arbogast and Wayne
Todd, as plaintiffs, indicates that Coyote Canyon was first used as a road
in 1775, when Captain Juan Bautista de Anza led an expedition through the
canyon on his way from Sonora, Mexico to San Francisco, California (Norte
Mexico). In fact, Coyote Canyon is part of the federally-designated Juan
Bautista de Anza historic trail. It also happens to lie within the
Anza-Borrego Desert State Park.

Public use of Coyote Canyon Road has been near-constant since de Anza's
original journey. During the 19th and 20th centuries the road was used by
pioneers and homesteaders, miners, farmers, ranchers, tourists, and desert
residents traveling between Borrego Springs in the south to towns such as
Anza in the north. The road was also popular with 4-Wheel drive vehicle
enthusiasts. According to the complaint, such public use was
sufficient to
establish Coyote Canyon as a public road.

Vehicle use of the road, however, came to a halt in 1995, when State Parks
adopted a new Public Use Plan for Coyote Canyon which called for the
closure
of the 3.1-mile middle section to protect natural resources. Since that
time, both the north and south entrances to the middle section have been
gated and fenced.

According to the complaint, however, these obstructions violate California
Civil Code section 3479, which forbids anyone from blocking a public road.
The complaint acknowledges that some public agencies - namely Caltrans,
counties, and cities - have the authority to close public roads, but that
State Parks is not among them. Moreover, even those agencies that
hold the
power to close roads may do so only in limited circumstances, such as when
the road must be repaired or no longer serves the public. No agency
has the
right to close a public road for purposes of natural resource
protection, as
State Parks did in 1995 when it fenced in Coyote Canyon.

The complaint does not seek monetary damages, but instead asks that the
Court direct State Parks to abate the public nuisance by removing the
gates,
fencing, and other obstructions and thereby reopening the road.

Although the road is located entirely within the Anza-Borrego Desert State
Park, the underlying jurisdiction over the road rests with the County of
Riverside and the County of San Diego. For this reason, both counties
have
been named as Real Parties in Interest in the litigation.

The case has been assigned to Judge Jacqueline M. Stern, North County
Division of the San Diego County Superior Court.

For additional information regarding the lawsuit, please contact David P.
Hubbard, counsel for EcoLogic Partners, Inc., Jim Arbogast and Wayne Todd.
His telephone number is (760) 432-9917 and his email address is
dph@....

next time we need some notices, pretty please, and have some major get together of SoCal cruiserheads!!

next time we need some notices, pretty please, and have some major get together of SoCal cruiserheads!!
Click to expand...

next time we need some notices, pretty please, and have some major get together of SoCal cruiserheads!!
Click to expand...


twas no secret Eric.
Those savvy enough to keep an eye on the NorCal Wagons email list knew about this run for several weeks
You must log in or register to reply here.