These are my adventures:
Both Egr studs and one of water bypass stud’s head got rounded.

Head bolts were super tight. Thought I was going to round the heads but none did. For all the bolts, not just the headbolts, that I removed, I wanted to prevent rounding the head so I cleaned them first using a wire brush for when there were oil crud on them then sprayed with brake cleaner and wiped.

Cracked 5 of the fuel injector connectors but was able to order from wits end.

Broke the connector of the knock sensor, was able to order from BMotorsports.com. Got 2 of them for $10

Marked the cylinder head for the unbolting of the headbolts, got excited and was so eager to unbolt that I started on no. 1 bolt of the exhaust side. Was so upset I messed up the order even more. Don't ask me why.

The fan shroud was in bad shape as part of the bottom was missing so when I removed it the top cracked in half.

Tried to loosen the ps hose nut which wouldn't budge but the nut under the union loosened instead.
Impact wrench and crescent wrench to remove ps hose.

Couldn’t turn the crank bolt bec the plastic that broke got lodged in the crank sprocket.

Went to HomeDepot to get a 22mm husky wrench for loosening the transmission union nuts. One of the compression nut was super tight.
----------------
Blackstone oil report $30 took about 1 1/2 weeks. They detected a high content of pottasium and sodium if I recall which is indicative of coolant.

Dropped of fuel injectors at RC Eng for cleaning/tuning for $150. They replaced all o rings and grommets and filters. They said to maintain it just keep on driving the truck.

Even though I'm removing the block I just don't have the money to have it rebuilt so I'm replacing the oil cooler gasket and replacing the timing chain/dampers. I've already previously replaced the oil pump gasket, front seal and the crankshaft pulley and bolt.
Probably should rebuild the power steering pump.

I got a borescope from Amazon and got a pic of the leak from the rear main seal.
That coolant pipe won't budge so got a piece of paracord and tied it to the 2x4 and used leverage to pry it up.

Got the engine valve grind gasket kit from toyotapartsdeal. What are these 5 rings for?

What is that black crud on the head gasket. It was there when I separated the head from the gasket.

Was not able to mark a matching notch on the flexplate/torque converter when i removed the 6 bolts. Does it matter? 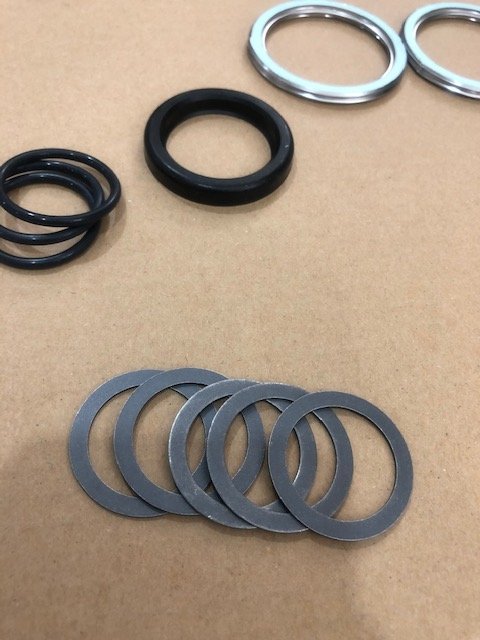 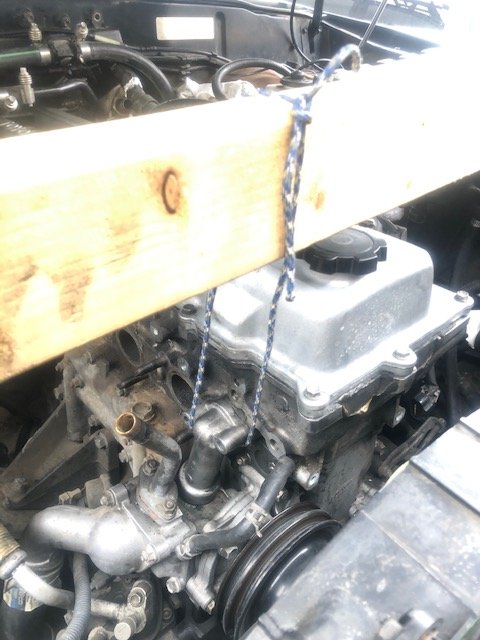 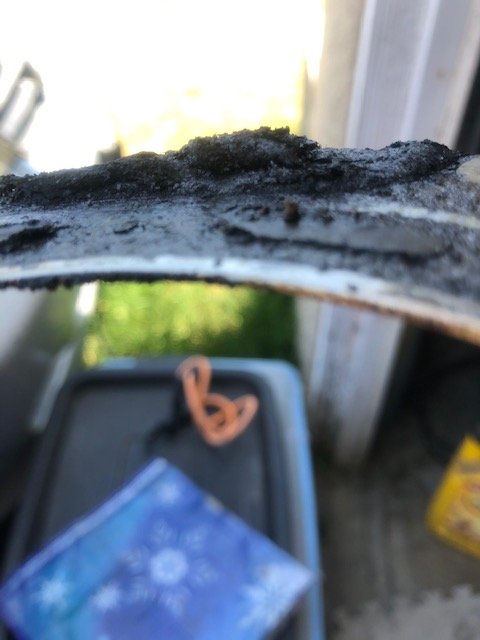 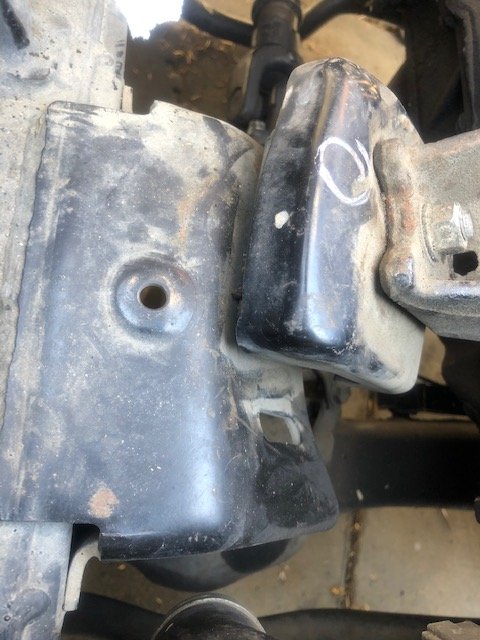 Wow sounds like a rough go. I believe those 5 washers are for the large hex bolts plugs in the head. Not certain though maybe someone can confirm.
M

coax said:
Wow sounds like a rough go. I believe those 5 washers are for the large hex bolts plugs in the head. Not certain though maybe someone can confirm.
Click to expand...

Thanks coax. I looked at the FSM and I don’t see any reference to hex bolt plugs for the head unless I’m missing it.

I was able to remove the block this morning. My first time. I learned a lot and made some mistakes along the way. I think the half ton engine stand I got from HF is a little bit small for this engine. The hoist however works great.

A machinist wanted $100 for cleaning the block, $50 for magma flux and another $100 for resurfacing. They said for resurfacing I have to remove the guts before handing them my block. My cylinder head went to another machine shop and I provided them with the valve seals which was included with the engine gasket kit.

At this point my next task it to get the mount straightened. I only have a map gas torch and was thinking of heating it up then hitting it from the bottom with an air hammer or put a thick piece of steel on top of it and use my ball joint press to squeez it in. The mount is one thick piece of steel however and I don’t know if my plan will work.

Now that everything is out I was thinking of cleaning the engine bay as well. I see the leak from the main seal now. I’ll post some pics later.

Can I get the cliff notes please?

The torque converter bolts has one that is different color slightly, it goes into the threaded hole that has a dot all the rest are the same

coax said:
Wow sounds like a rough go. I believe those 5 washers are for the large hex bolts plugs in the head. Not certain though maybe someone can confirm.
Click to expand...

No reason to remove the Screw Plugs in the head though....so not needed by most.
Last edited: Jul 4, 2020
M

ajax1 said:
The torque converter bolts has one that is different color slightly, it goes into the threaded hole that has a dot all the rest are the same
Click to expand...

Thanks..I'll look for the dot first thing tomorrow. Just so happens that the very first bolt that I removed was the green bolt.
M

OK I'm looking at pics of my cylinder head and the FSM and am not finding this large head bolt plug. Where exactly on the head is this? Thanks

This was the part of the chain tensioner slipper that I broke that ended up on the crankshaft sprocket which prevented me from turning the crankshaft.
I was able to dislodge the piece with a long piece of stick.
Removed the oil cooler and found some gunk on the leftmost chamber. 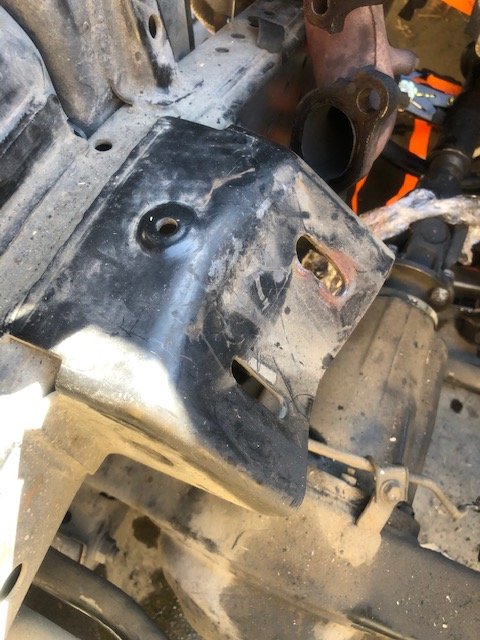 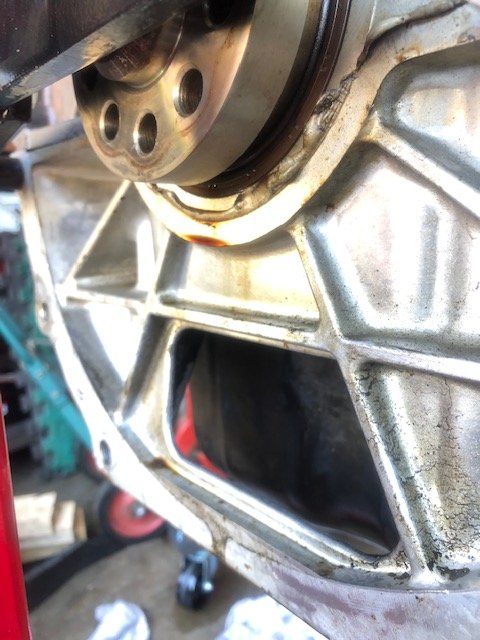 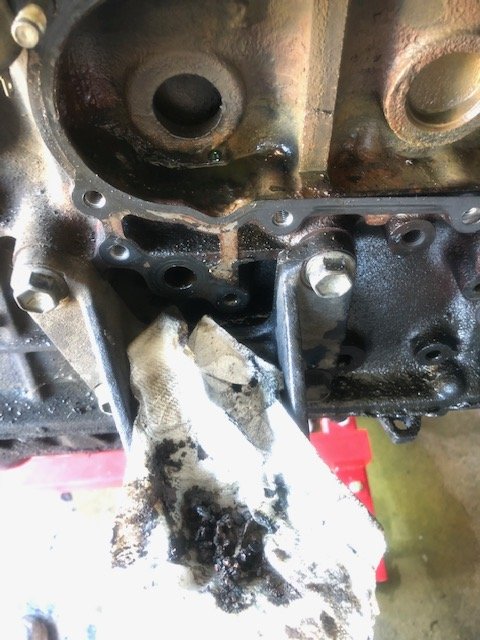 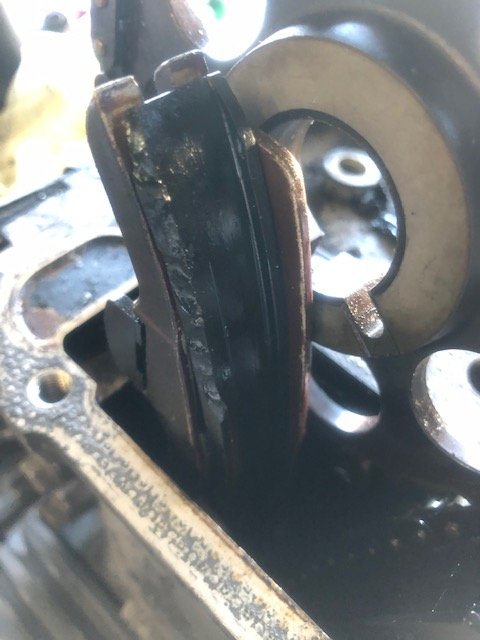 Please disregard. I see that brass looking large hex head bolt now. What is the purpose of it anyways? Any benefits to replacing that washer?

With regards to straightening the engine mount, if you have access from the bottom, you could use a small hydraulic jack, or maybe even a scissors jack, to press it back into place. I don't know that I'd bother with the MAPP gas - unless you can get the steel glowing red, it's likely not worth it. I could be wrong, though.
M

tominboise said:
With regards to straightening the engine mount, if you have access from the bottom, you could use a small hydraulic jack, or maybe even a scissors jack, to press it back into place. I don't know that I'd bother with the MAPP gas - unless you can get the steel glowing red, it's likely not worth it. I could be wrong, though.
Click to expand...

Thanks for the suggestion. Just where/how to mount the jack under it would be tricky. I can grind the mount down the middle and bend each wing up and weld.

Flintknapper...borrowed your idea on the engine stand support. Thanks. 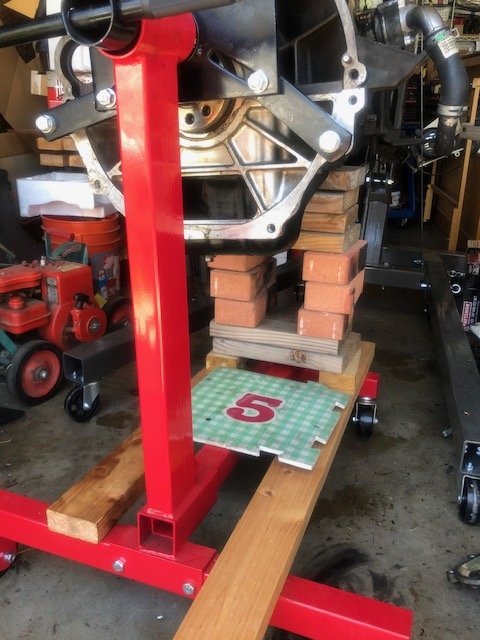 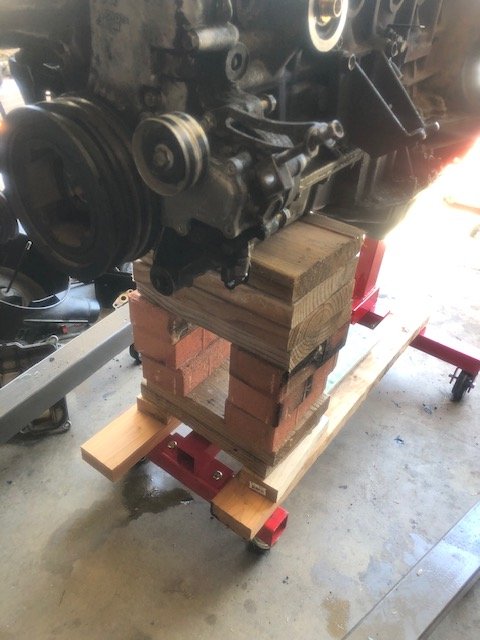 May said:
Thanks for the suggestion. Just where/how to mount the jack under it would be tricky. I can grind the mount down the middle and bend each wing up and weld.

Flintknapper...borrowed your idea on the engine stand support. Thanks.

That was Jim's idea (solution) actually. I did my work with engine in vehicle, but yes....its a great idea.
M

Got my engine mount fixed.
My metal bending skills are as bad as my cooking so had someone come over to fix it.
We tried putting a jack under the mount but instead of bending the mount it lifted the truck.
He ended up using an acetylene torch to remove the welds, hammered it back straight and welded it back on.

Got my parts finally from toyotapartsdeal. They just stuffed everything inside with no padding. The engine mount insulators and the crankshaft bolt were bouncing around inside damaging the oil pump gaskets and the chain damper.

Checked the top of the block and it looks like it is bowed in the middle. I can pass a .002 feeler gauge easily and can almost start a .003 from going in with a slight bite. So it's going to the machine shop.

The cylinder bore diameter marking on the block is almost gone and pitted. Shows 6 2's. When they resurface the deck I'm sure it'll be completely removed but here's a pic of what it currently looks like.

2. Can I get a STD set instead from rockauto(Clevite brand) since it's within spec still? Do I have to have the crankshaft ground with this STD set?


The bad bearing pic is from cylinder 5. I can feel shallow gouges with my nail but not when I run my finger tip across it.
I'll check the crankshaft bearings when I get home from work. 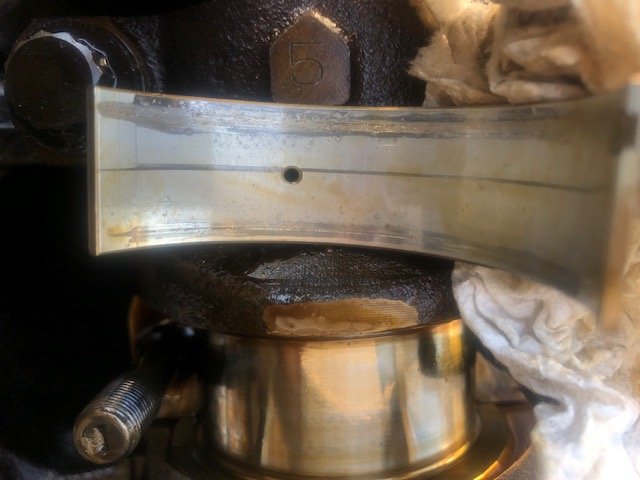 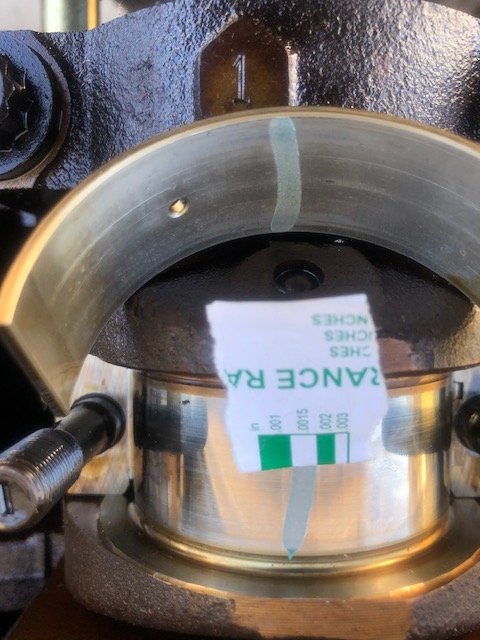 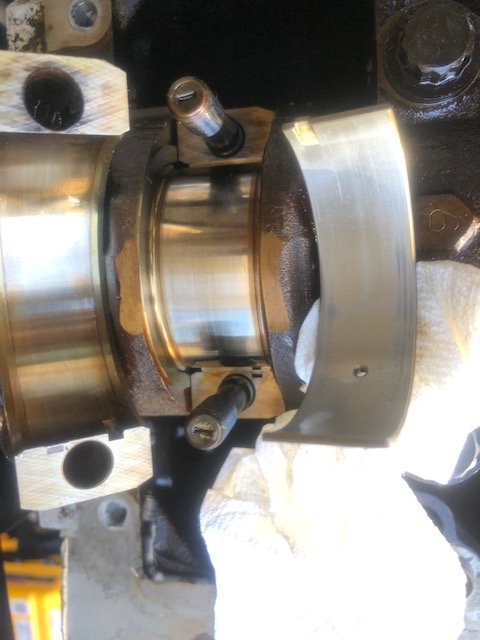 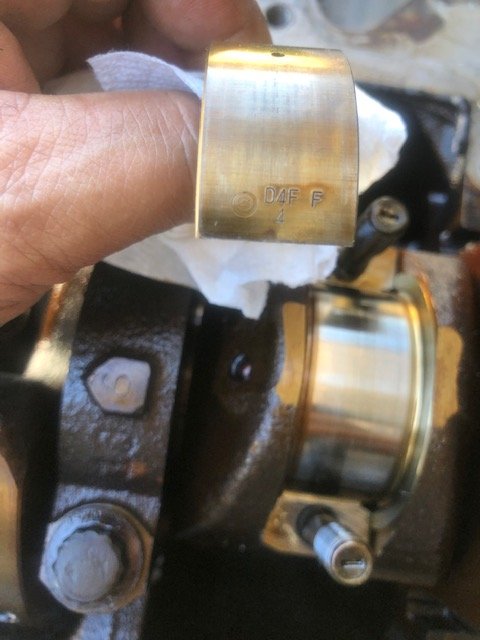 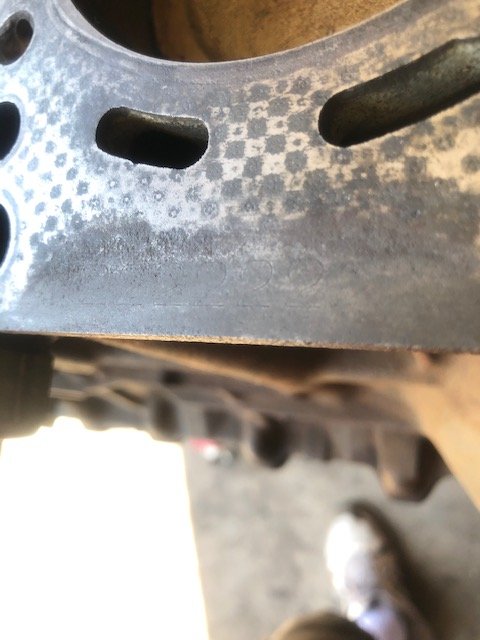 Got the block back from the machine shop. I want to verify the clearance with Plastigage so this will be the 3rd retorque. And after checking the results the final install with be the 4th retorque. The rod bolts are still within spec. The machinist mentioned no need to plastigage it. So if I don't then that'll the 3rd torque session. Don't want to take any chances so ordered the rod bolts/nuts. Haven't taken that out before and saw some youtube videos where they put the rod on a pipe and bash out the bolt which doesn't look good to me. Apply heat then clamp it in a vise and hammer out? Any other methods you guys have used?

I'm far from an expert, but in all my reading I did on rebuilding my 1fz i didn't come across anyone replacing the rod bolts/nuts. If they were in spec I'd hazard a guess they will probably be in spec after you plastigauge...but you could always recheck before reassembly for the final time? Mine were up to a total of 4 torquings (factory build, machine shop work, rebuild for plastigauge, final rebuild).
M

Thanks coax, same situation as me! And how are the rod bolts on yours doing so far?
There's not much that I could find on the forum either regarding replacing the rod bolts other than people
whose bolts got damaged and they replaced it with the engine still in place. Read where one guy tapped it out.
I'll replace it anyways since I haven't done it before. I also ordered the main cap bolts and they're in the same number of torquings as the rod bolts.

i measured all mine (rod and main) and they measured all in spec and didn't deviate hardly at all between themselves...so I just reassembled and moved on. I'm far too much of a novice at this to worry about those things that were in spec...i had other worries like stripped exhaust studs in the head So far engine is just fine but still in break in period.
M

Thanks for the update coax. Enjoy the break -in.
You must log in or register to reply here.

Rear Engine hanger 2 delete or not