Visit site
Hey all, I just test drove a bj74 last night and have some questions for those of you with experience.

First of all, this is a new, unfamiliar vehicle for me. Anything in particular to be aware of/look out for?

My biggest concern with the truck was smoke. While searching for the (discovered to be broken off) tailpipe, there was enough haze to get a good burn in the eyes, and even after the drive and getting up to operating temp, there was a constant sort of "puff" that never really let up. Not thick smoke by any means, but still very noticeable by flashlight (it was about 10pm)
Our tired old BJ40 had similar issues, but if memory serves, ran cleaner when warmed up. The Dodge ctd, in comparison, runs very 'clean'.
I have no experience with the 13bt, does this set off alarm bells for you guys, or do many toys have this tendency?

Secondly, on 31s, it was running about 28-2900 rpm at 100kph in 5th (manual transmission). Seemed a bit high to me, like it was geared a little low. This leaves me guessing 4.88s rather than 4.1s? How much tire can you get away with running without fender clearance issues? Seemed it would be nice to drop the cruising rpm some, and I didn't feel it would hurt much off the line.

Sorry for the long, question riddled post. I just stumbled upon this board and it's by far the most info I've found on the 7x series. I'll go back to digging through the archives now...

Thanks in advance for any info!

Visit site
If it's smoking then the engine or fuel system is sick.

Mine only smokes a bit on hard acceleration uphill.

Keep in mind that oversize tires will cause speedo errors. The tires on mine are 32" diameter and the speedo/odo is 10% low.

Visit site
the H55F with 4/11s will rev about that rpm with 31s. that truck really needs the 34' truxus tires

the truck (i am thinking it is Mikes) is in really good shape, the 13BT is direct injected and does smoke more than a 3B, it really needs the boost turned up and the fuel turned down a bit. for the price i would make sure a new tailpipe was installed or a couple bucks towards a 2 1/2" exhaust system was supplied.

get a 2 1/2" system installed at minute muffler on 17th and 52nd
install a boost pyro and oil elec gauge package. see what the egts are at cruising speed and on long hills under full throttle. crank up the boost to 14 PSI adjust the fuel till you are at a max of 1200F.
install the 33 or 34" tires and enjoy...
F

Visit site
Thanks for the feedback. I love when problems can be solved by cranking up boost to burn some extra fuel, and adding taller tires. I can see the boost helping down the highway, my concern was haze at idle with the truck in neutral.\

34s fit in the stock wheelwells, or after trimming?

It's not Mike's truck. Where is that one listed for sale?

How bizarre. I wonder what I'm missing... 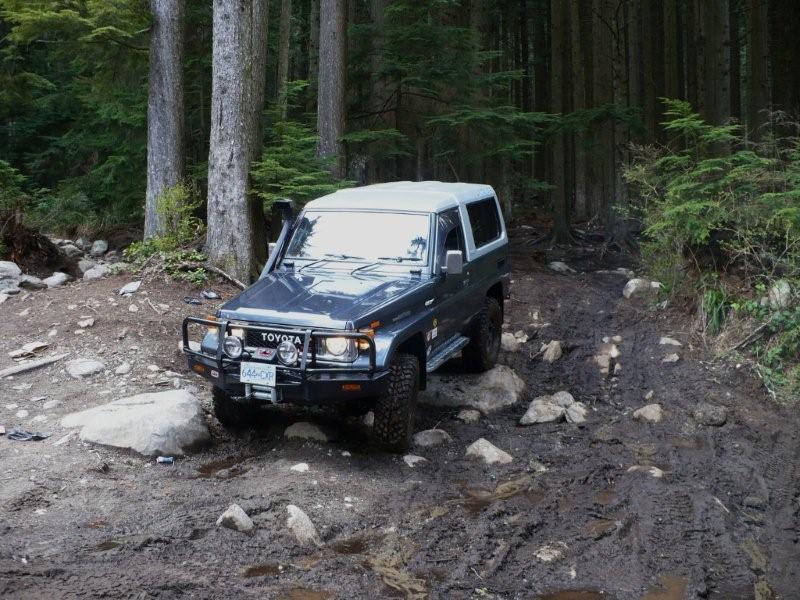 flyin phil said:
Thanks for the feedback. I love when problems can be solved by cranking up boost to burn some extra fuel, and adding taller tires. I can see the boost helping down the highway, my concern was haze at idle with the truck in neutral.\

34s fit in the stock wheelwells, or after trimming?

It's not Mike's truck. Where is that one listed for sale?


Its all about the colour of the smoke.


flyin phil said:
Secondly, on 31s, it was running about 28-2900 rpm at 100kph in 5th (manual transmission). Seemed a bit high to me, like it was geared a little low. This leaves me guessing 4.88s rather than 4.1s? How much tire can you get away with running without fender clearance issues? Seemed it would be nice to drop the cruising rpm some, and I didn't feel it would hurt much off the line.

If its got 4.11s I would say your speedo or tacho is misreading. Tyre size wont affect what is reading on the dash instruments

Visit site
it is not listed yet, he is sending me a bunch of pics and a description to stick up on my site.

i should have realised it wasn't mikes when there was a chunck of the exhaust missing... i know his truck and he would not sell it like that.

smoke: do a compression test, coolant pressure test and does it snoke worse under throttle or not. if so then it might be a overfueling problem, dirty injectors...

shoot me a email direct with the sellers name and i might know the truck if it si around Calgary...


flyin phil said:
It's not Mike's truck. Where is that one listed for sale?

roscoFJ73 said:
Tyre size wont affect what is reading on the dash instruments
Click to expand...


Of course it will. Think about it. The speedo is calibrated for the stock tire diameter P235-75R15. Install larger diameter tires and the calibration is off.
F

Visit site
Hey thanks for all the replies. Let me see if I can reply to them all.

rosco - re:smoke, I need to have a better look at the truck, and in the daylight this time, to get a better idea of what's going on.

I know tires won't affect what the tach reads relative to the engine, but they will of course affect engine speed required to move down the highway. That's really more what I was getting at. The truck felt decidedly over-geared (as in low, or too much gearing) but I haven't been in a cruiser in a few years, and the last one was a 4 speed B engine'd 40, so what do I know, it just sure felt like it could have used another gear to be highway friendly.

Crushers - it's in Vancouver, as am I. I'd love to do a compression test, as I believe it to be one of the best indicators of engine condition. I'll check if the guy's up for having one done before the deal goes any further. Or maybe he'll just sell it to someone less picky

Mr Galt (though somehow I doubt that's your real name ;p ) I agree, the speedo will be in-accurate, but the rpm required to turn an indicated 100 kph will not change ( though rpm required for a true 100 certainly will), and that's really what I was going by in this case, comparing the speedo to the tach, as well of course as other traffic on the highway.

Visit site
flyin phil , if you are still looking at the truck pm me I will go look at it with you, is it white for 7500 bucks
F

Visit site
Hey that's the one! Have you looked at it? Impressions or opinions?

M John Galt said:
Of course it will. Think about it. The speedo is calibrated for the stock tire diameter P235-75R15. Install larger diameter tires and the calibration is off.
Click to expand...


In reality you will go faster with bigger tyres but the rpm/kph ratio remains the same.
In other words if the speedo says 100 kph at 2200 rpm it will always read that regardless of tyre size.

Visit site
Well it runs pretty good , newer clutch, mechanically its not bad, lots of rust around the quarters . I drove it last october , has the pto winch for 7500 I would get it
F

Visit site
Glad to hear that. I found it drove quite a bit better on the way home than I remembered.

It needs a few minor things (tail light lens, tailpipe and 12V converter for accessories), but it runs and drives quite well, and I think the truck overall is in quite nice shape for its age and price.
Last edited: Apr 28, 2008

Visit site
Good Im glad you are satisfied with your purchase. Have you looked into Coastal Cruisers, Im a member
F

Visit site
Haven't heard of it, I'll check into it.

I'm curious about your ZEAL lift, since this one could do with some fresh springs. But maybe this thread isn't the place for it - on the other hand, I guess I can just hijack my own thread.

Why not OME, since that's about all you hear about? How satisfied are you with the ride? Where'd you get it, and the million dollar question, if you don't mind my asking, co$t?

Thanks in advance for any info. My other truck (vw td powered samurai) is linked and coiled, but I want to keep the mods simple on this one (minimize downtime)...so bolt on leafs sound good.

Visit site
I am ok with the Zeal springs they are mediums on the back and heavy up front . With all the potholes we have I cant miss all of them. Lets just say its a stiff ride on the pavement. I have OME anti inversion kit and overlength shocks and OME steering stabilizer . They all work great. This setup I have works AWESOME in the Bush and that is what it is for. 1700 bucks complete with bushings shocks and shackles steering stabilizer and springs. There are other brands out there Zeal, Keep Slant, and Dobinson oh ya and Belton . I am about a year away from coiling my 74 but for now anything is better than the stock worn out springs. You may want to order your own or go and see the boys at ATEB or see STEVE at EBI he knows your cruiser, he did the clutch on it
Last edited: Apr 28, 2008
You must log in or register to reply here.