Has this ever happened to anyone? I recently returned from hunting trip (more accurately 'hiking with a gun' based on my success rate) and was off road for a good portion of the trip.
From our home in Denver to NW Colorado, I drove approx 400 highway miles as well and at 60-75 mph. Got home and was unloading the truck. When I was jockeying the truck in the drive I heard a horrible noise in the rear wheel as if a steel marble was rolling around in the drum. I jacked the PS rear and found nothing and the sound went away. Two days later after not having used it for a day I noticed the noise but this time louder and on the driver side. I was already at work and decided it serious enough that I should go home and swap for my Tundra.
When I pulled the wheel and drum I first found a pebble lodged between the dust cover and back of brake (not 100% certain of this part name but it was wedged between sheetmetal and cast iron). When I took the drum off a pebble about 3/8" by 1/2" tumbled out and it had obviously been 'polished' in the e-brake. HOW is this possible?
I have recently rebuilt all the brake components (front & rear, removed and replaced calipers, all seals, springs,SS Slee brake lines, whole sha-bang). What I expected was to find a broken or dislodged spring rolling around inside. But no, a pebble! 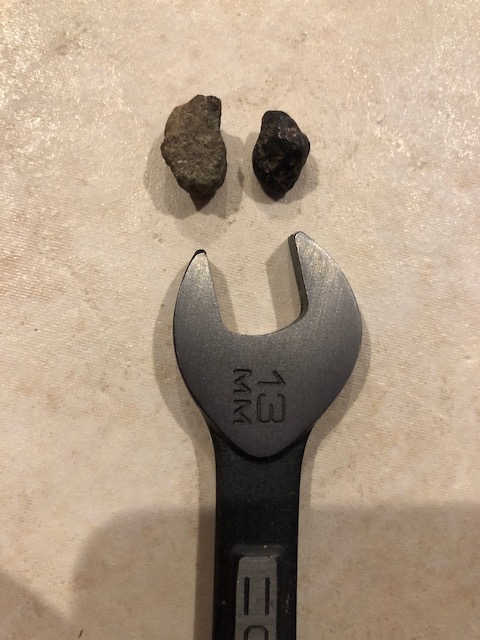 The attached pic shows the 2 pebbles. Larger was wedged outside the drum, darker smaller pebble was inside. It looks almost like a piece of slag or iron but magnet says its not.
Final confession. I don't have rubber covers for inspection hole or parking brake adjustment hole. It's the only thing that i think of.
You must log in or register to reply here.
Share:
Facebook Twitter Reddit Pinterest Tumblr WhatsApp Email Link

L
This is crazy! Looking for 2002 Lexus LX470 roof rack "roof cushions" that Forum member may have sitting around - exhausted all vendor options....

Today at 6:53 AM
HRTROB
H
E
Disconnected part found while swapping shocks. Help me identify it?

A
Grinding noise while accelerating and turning left