I am trying to determine the difference in the 4Runner power steering gear boxes for 79-85 and the 86-95. I assume it has something to do with the solid axle and the IFS.

Completely different. The early style is often called the 'push pull' and is used many times for FJ40 power steering conversions. Hard to find and $250 minimum, used. IFS boxes are set up for crossover steering and are cheaper and somewhat more available. Look at pix on Rock Auto if you want to see the differences.

(from another forum)
"There are two styles of Toyota IFS steering boxes, Early and Late. The early style came on 86-88 Pickup's and 86-89 4Runners. The late style came on the 89-95 Pickup and 90-95 4Runner. There are many internal differences between the boxes and most parts are not interchangeable. Externally the only difference is the length of the steering input shaft. The later style box has a 1" longer input gear. The later style box also has a slightly faster internal gearing ratio, requiring slightly less turns to get the box to full lock.

The longer input gear is only an issue if you are replacing a box. If you switch from one style to the other you will need to change the length of the steering shaft that goes to the steering wheel.

If you're installing crossover steering on a 79-85 truck you can use either box without issue. Both boxes mount the same way and both have the same hose arrangement. Most people choose the early style box as it is more available in junk yards.

If your searching for a box in the junk yard you can tell the difference between them by looking at the housing around the steering input shaft.

Note these are both 4wd steering boxes. 2WD Steering boxes are not used due to the smaller sector shaft. " 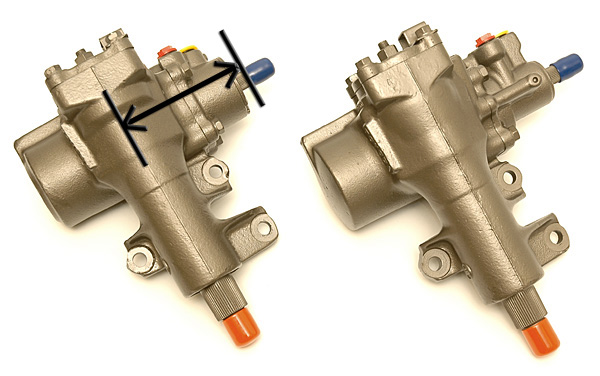 See, this is why I hang out with you guys. I not only learned something, but I learned my IFS box is a late box.

X2. Great info!
You must log in or register to reply here.

1985 4runner. To run the steering stabiliser or not, that is the question