Inspired by this thread: https://forum.ih8mud.com/electronic-toys/253505-green-back-light-yaesu-radio.html

Someone had to do it. 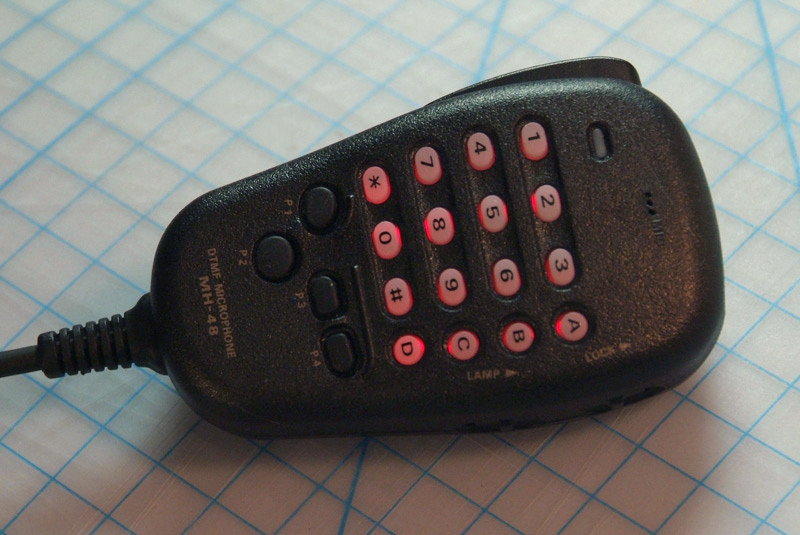 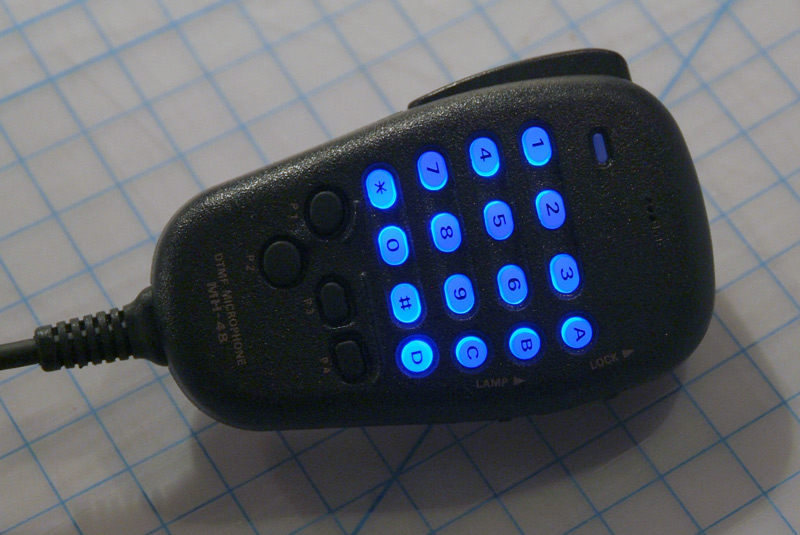 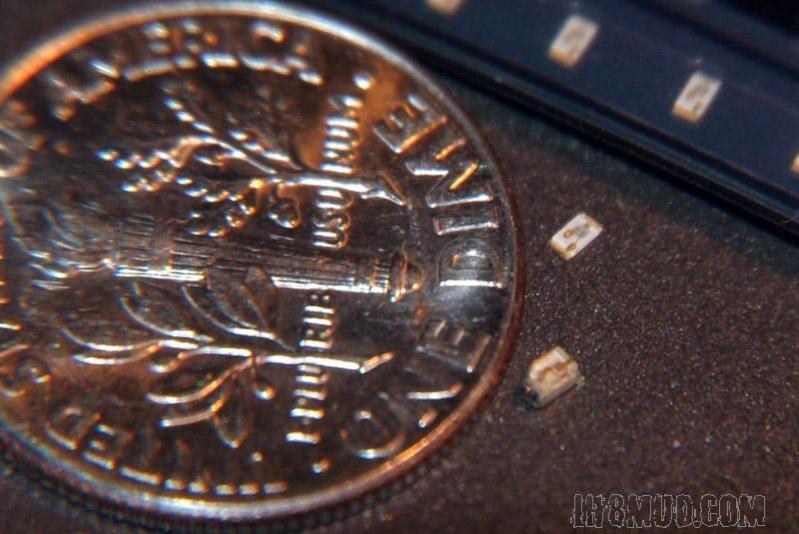 In the first and second pics, the LED in the upper right of the circuit is the LED that lights when you key up the mic. I should have left that one red but it is blue now. 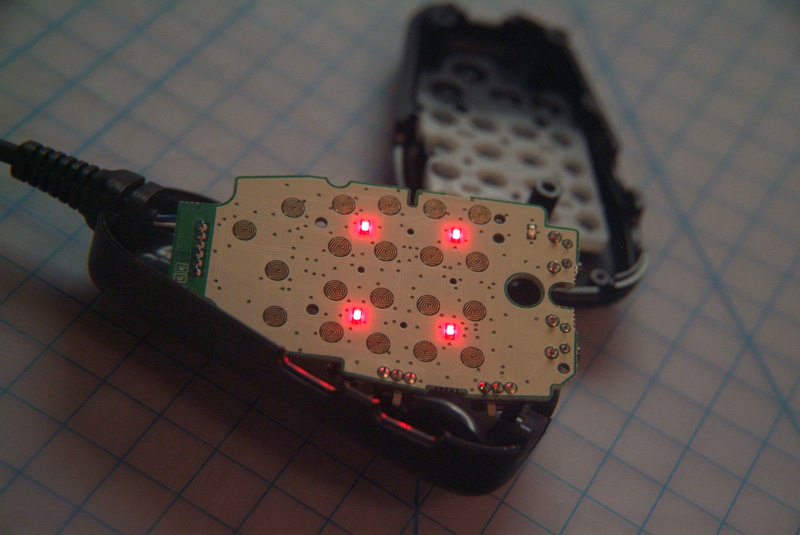 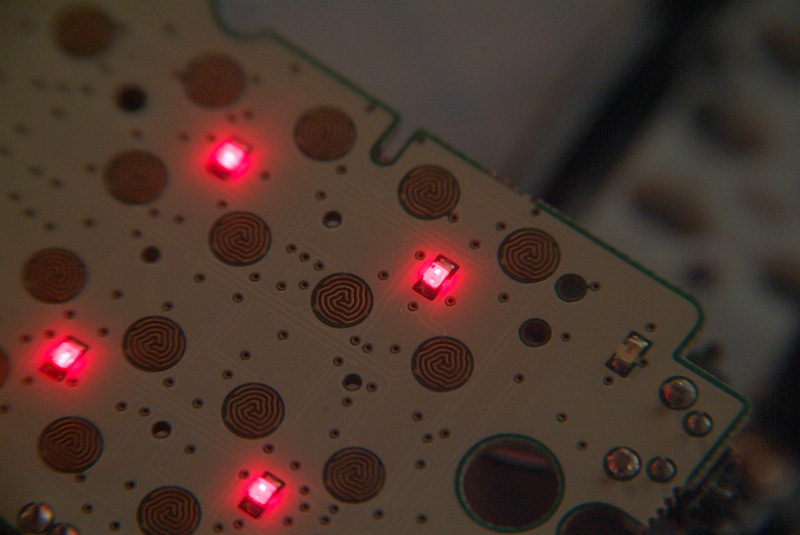 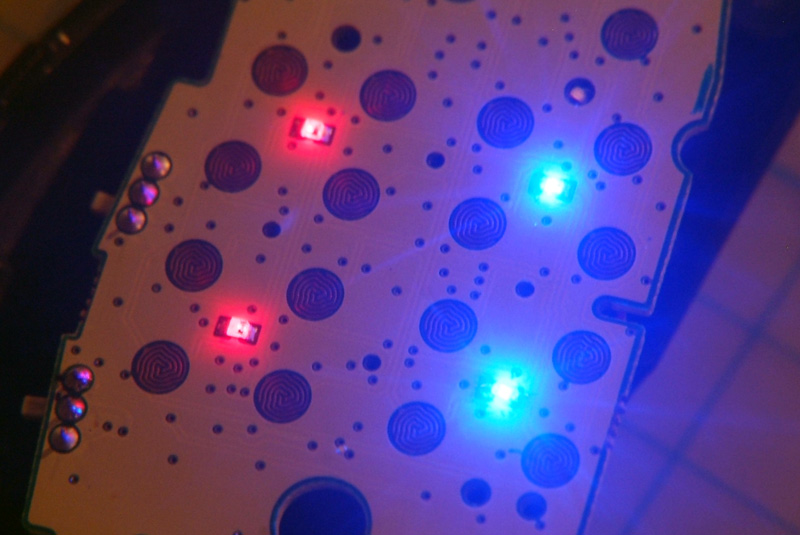 Step 1 - Take your new FT-8800 out of the box
Step 2 - Take it apart
Step 3 - Behind the clear buttons you will find five SMD LEDs. The board is not marked positive and negative so make note of the LED orientation.
Step 4 - De-solder the LEDs. I use a solder sucker and zero force to remove them. Once all the solder is gone, they will fall off on their own.
Step 5 - Take the new LEDs out of the packaging, sneeze, and spend about an hour looking for them on the floor. On a serious note, make sure to ground yourself as static electricity will destroy the LEDs.
Step 6 - Solder the LEDs to the board. I used a small pair of tweezers to hold the LED and solder it a flat as possible. The LED will bend so before it gets pulled into the solder, the opposite end should be close to the same height. Polarity is marked with a green arrow on the back of the LED.
Step 7 - Reassemble.
Step 8 Optional - Squeal in joy that the thing still works when you turn it on.
Last edited: Jan 25, 2009

pimp man. I need to make a trip to your place to do mine.

The LEDs are 3MM


Take the 4 screws out of the back
Carefully separate the back panel, there is a strip that connects the RJ11
Flip up the clip to release the strip and separate.
Remove the knobs and the brass rings
Bend the tabs to remove the LCD
Unsolder/solder/and reassemble 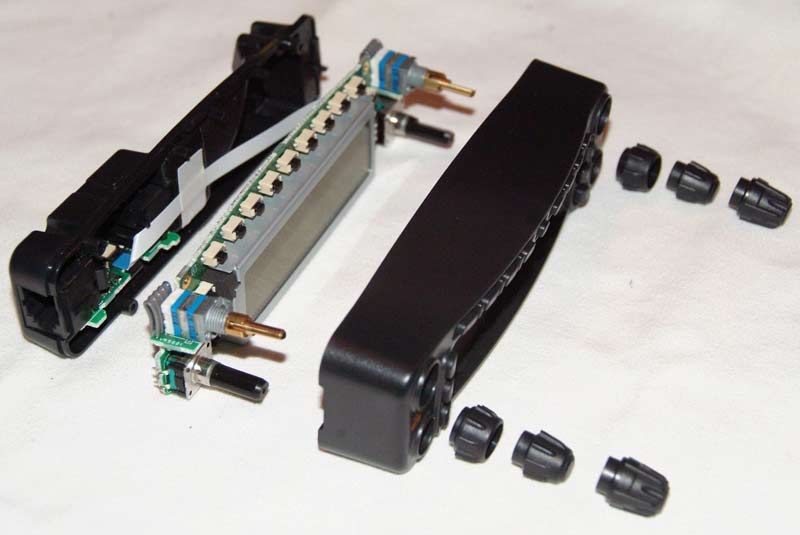 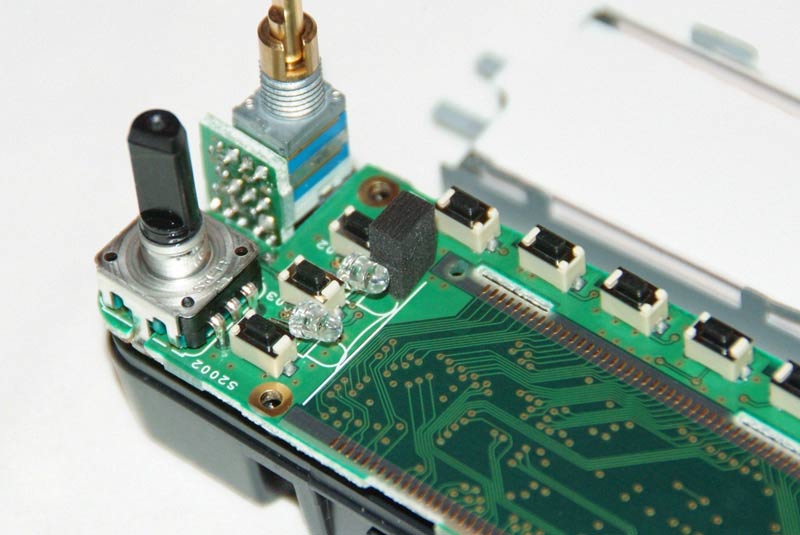 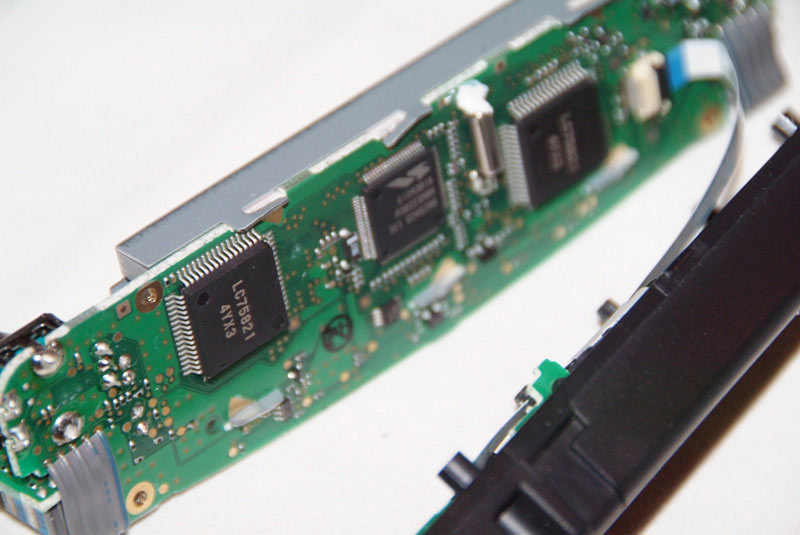 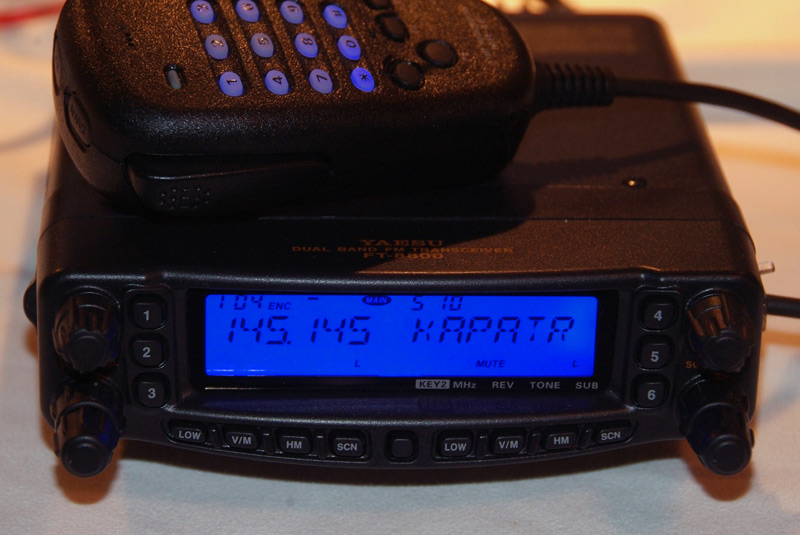 Compression is killing that pic... 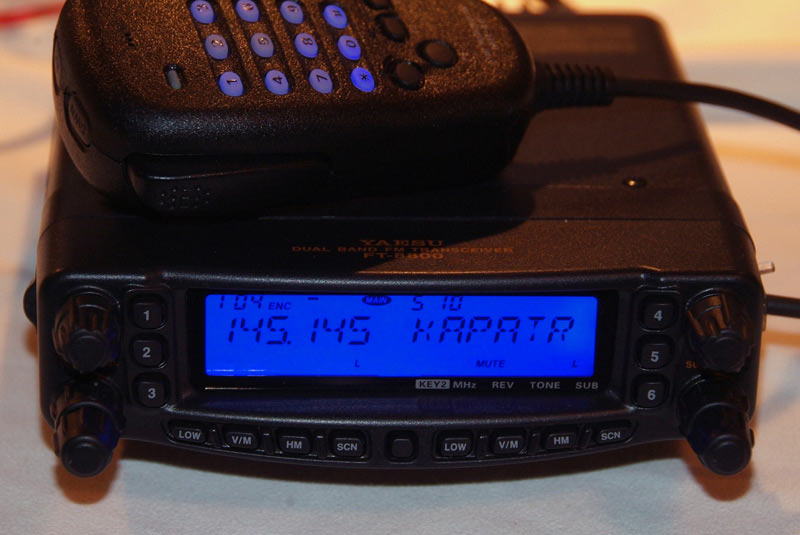 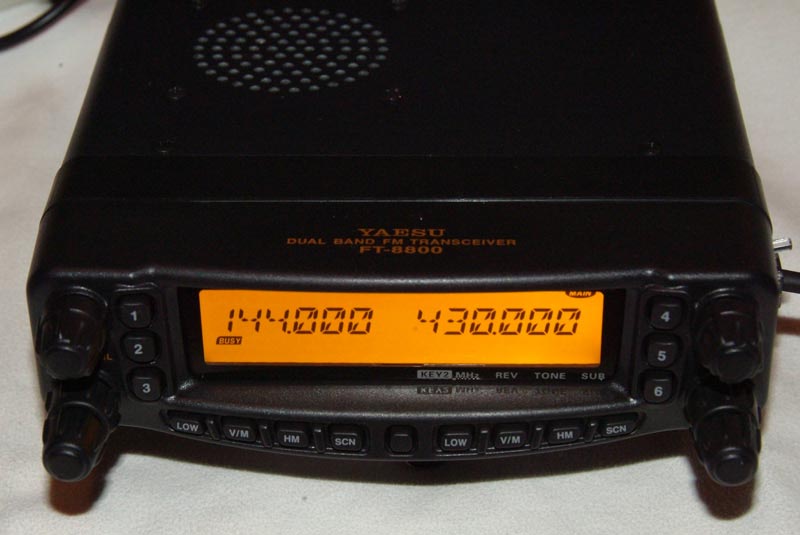 Now the big question: IF the stock colour of the Yaesu was Blue, would you have changed it to Amber???

Now the big question: IF the stock colour of the Yaesu was Blue, would you have changed it to Amber???

only if you change the rest of the interior lighting to amber...

The LEDs in the face plate are 3MM. I purchased the SMDs from Kingbright USA, an opto-electronic LED manufacturer products include all type of LED LAMPS , SMT LED, SMD LED, LED DISPLAYS optoelectronic components

Attempting the mic LED changeover. Had to buy a new desoldering iron first. By the way Kingbright, now packages the leds differently so they don't get scattered all over the floor.

I am wondering if blue makes it easier to read the display/keys in the dark or direct sunlight?

Here are the green LEDs wearsabrowncoat picked up from Kingbright. Part number APG1608CGK C/T. The camera makes it look a little greener than it is. I think it is a perfect match to the Cruiser green as it has a little more yellow in it in person. 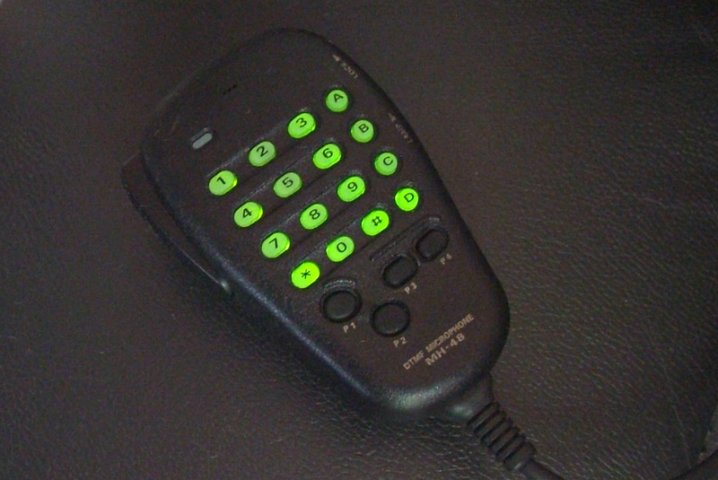 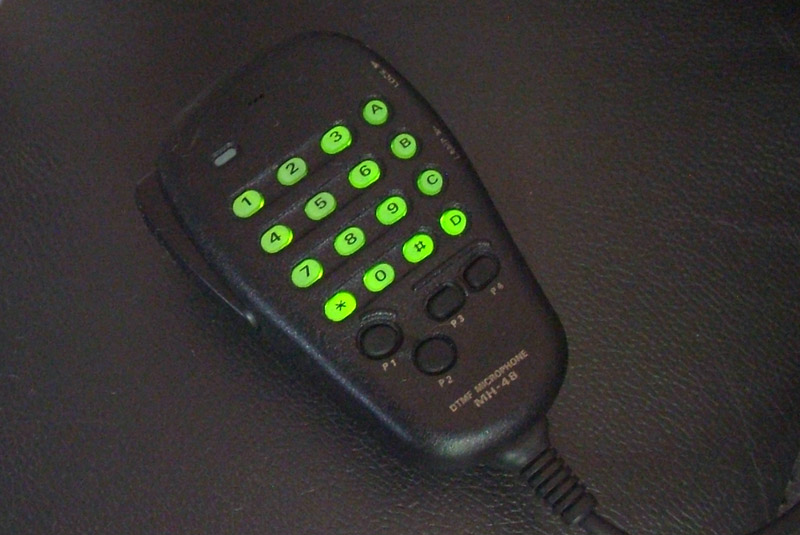 do mine do mine!

Veteran of the Psychic Wars

1loudLX said:
do mine do mine!
Click to expand...

I want to buy one so he can do mine.

treerootCO said:
Here are the green LEDs wearsabrowncoat picked up from Kingbright. Part number APG1608CGK C/T. The camera makes it look a little greener than it is. I think it is a perfect match to the Cruiser green as it has a little more yellow in it in person.
Click to expand...

You guys are doing it the hard way! If you had a Kenwood radio, changing it to green to match your Cruiser is just a simple menu choice. 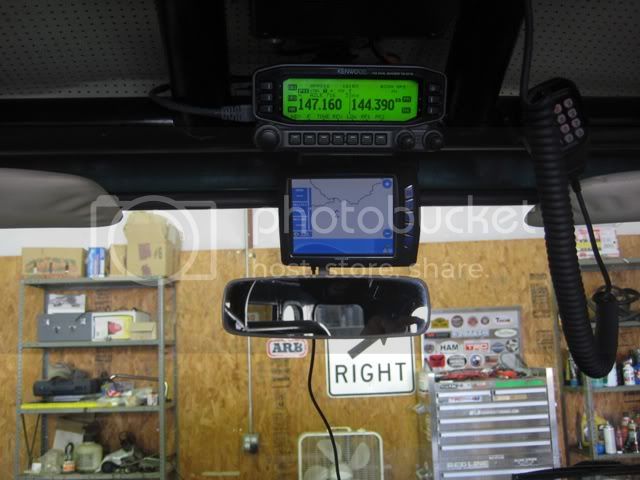 If you don't have a solder sucker solder wick works pretty good. In fact, all I ever use for SMT re-work is solder wick.
You must log in or register to reply here.

F
How much gain is lost putting the Antenna on the front bumper vs. attached to my roof rack?

F
How can I avoid SOLAR system Panel and MPPT controller frequency interference?