Hello.....quick intro. So just purchased my first 100 and the biggest question I keep asking myself is “why did wait so long??” Been lurking in the 100 section for some time now trying to decide if I wanted to sell my 62 and make the jump over. After previously owning 1983 40, a 1985 60, an 1994 80 and most recently a 1989 62 I was looking forward to giving the 100 a try. After recently selling my 62, I had some great calls and discussions with some fellow mudders about their 100 and came close to dropping the hammer on a few. With the COVID-19 craziness, I was not looking to do a fly in drive back so I have really been struggling last few weeks trying to find a decent 100 in north Florida area within my price range.

Little about my new to me 100....so about a week or so Ago I was actually on the way home from work and saw a stock, black in color, 2000 YM sitting at a restaurant in town. Seeing that I was without a cruiser and getting desperate I figured why not...I stopped by and left a note asking the owner to give me a call if interested in selling. As luck would have it, guy actually called.

Story of the truck: so guy tells me he has only had it a month. Bought it off guy in north Florida who had had it about 6-8 months. Previously it was owned by one other person and the truck had been in north Florida all its life. Met up shortly thereafter for a test drive/inspection near my house. After a meeting with the owner I find out that he had just gotten it out the shop that morning and had the radiator/hoses/belts replaced. Also Found out that the owner was not really looking to sell but if I paid him what he bought it for plus the shop fee for the new radiator repairs (2 year warranty included) he would let it go. He also mentioned he had no clue the gas mileage was so ridiculous in these trucks. Lol. We had a deal and I had a new 100 and never had to leave town.

Details: 3 previous owners, clean car fax, no accidents, NO rust, north Florida vehicle, 257,700 miles, black with tan interior, TB/WP done twice last one at 242,xxx. New radiator with hoses and new belts, front seat redone, all switches and lights work to include working sunroof with no leaks. Power antenna works fine. Factory radio and rear AC. Good service history from car fax and Toyota along with original window sticker and all original manuals and lots of receipts. No leaks underneath. I have put about 200 miles on it so far and I am loving it. It is smooth as butter and the ride is crazy nice. I guess my only complaint would be the high miles and only because if it had half that then I would drive it forever. I’m scared to get around a 200 if the 100 is this nice!!

Couple of quick questions....
Both times I met the previous owner and drove the truck before the purchase, the truck was hot. After I bought it and brought it home overnight, the next morning during startup I noticed what I believe to be a drivers side exhaust leak/tick. It goes away after 30 seconds or so and stays away as long as hot. Should I spend the money to get this fixed or can I drive it as is?? I don’t want to cause any additional problems but sounds like this is an expensive repair. This is a weekend warrior/3 rd vehicle so I do t put many miles on it. Next question is the original windshield has a long crack below my line of sight. I could get it repaired through insurance but am concerned about leaks. Should I be? Kind of like the original with the Toyota stickers.

Plans are to baseline fluids and change out heater Ts. Anything else I need to do right away?? I pulled the running boards and put new tires on same day I bought it!! Lol

Anyway. Sorry for the long post. Glad to be a new owner and looking forward to keeping up. Thanks for all the advise. 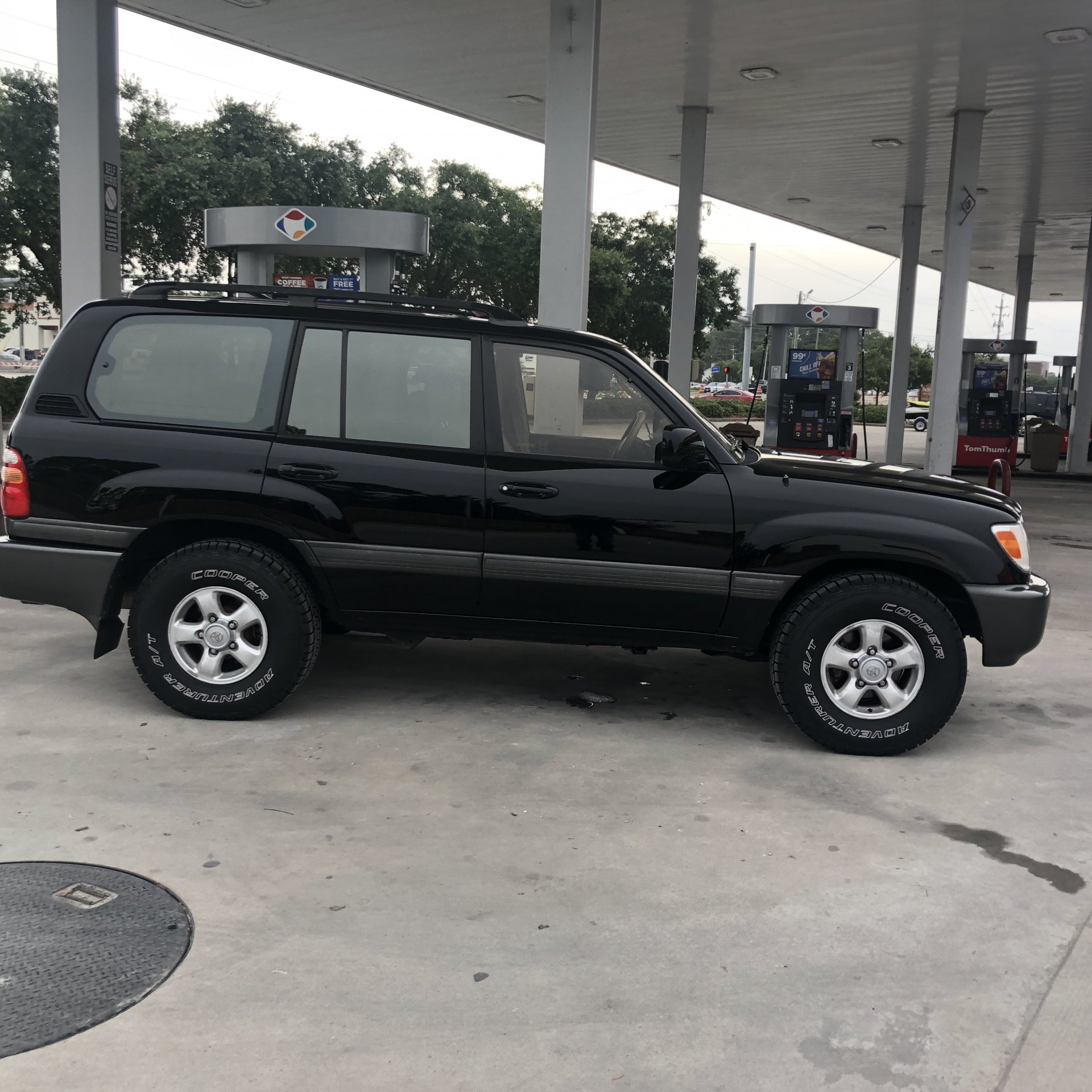 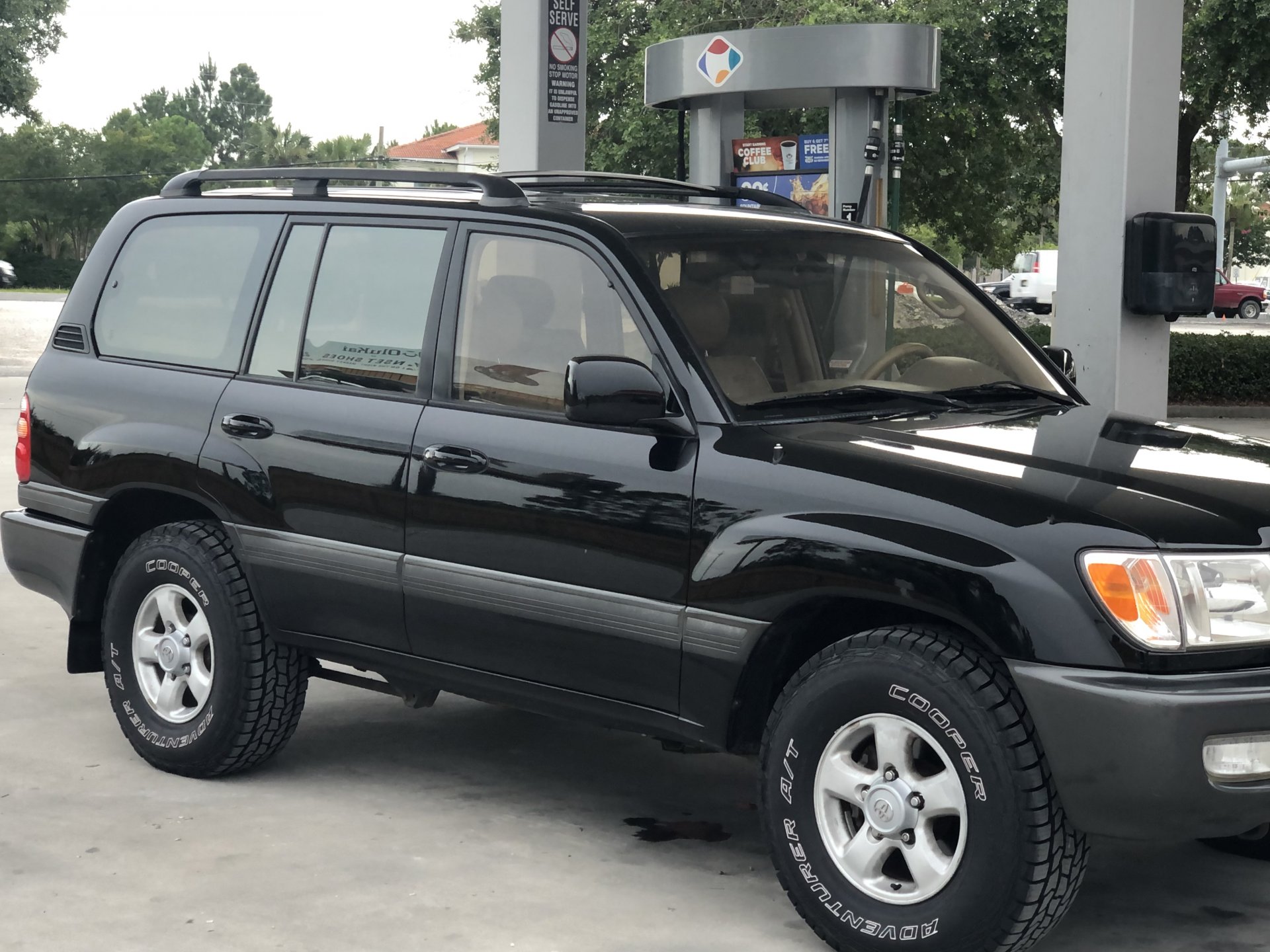 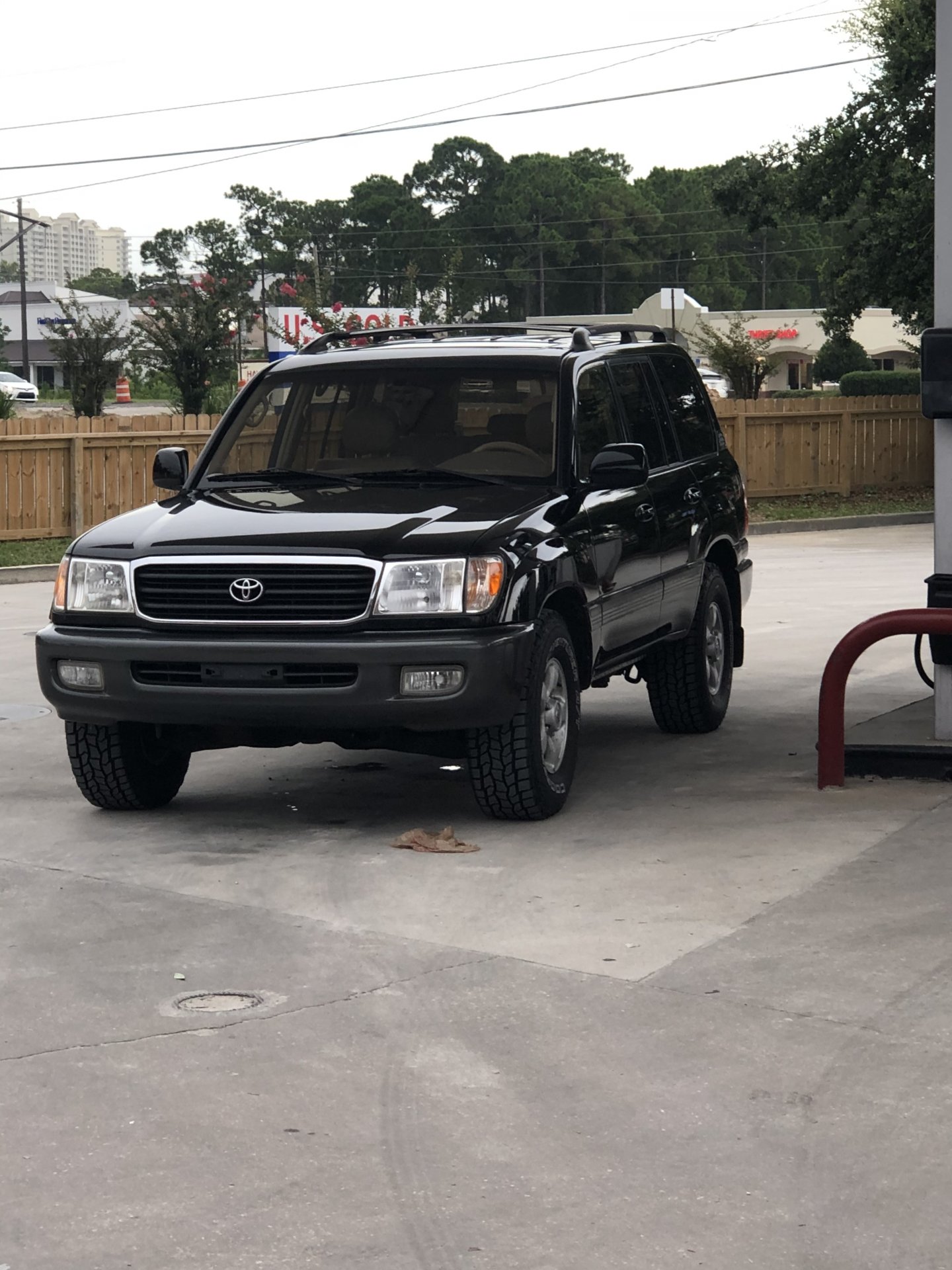 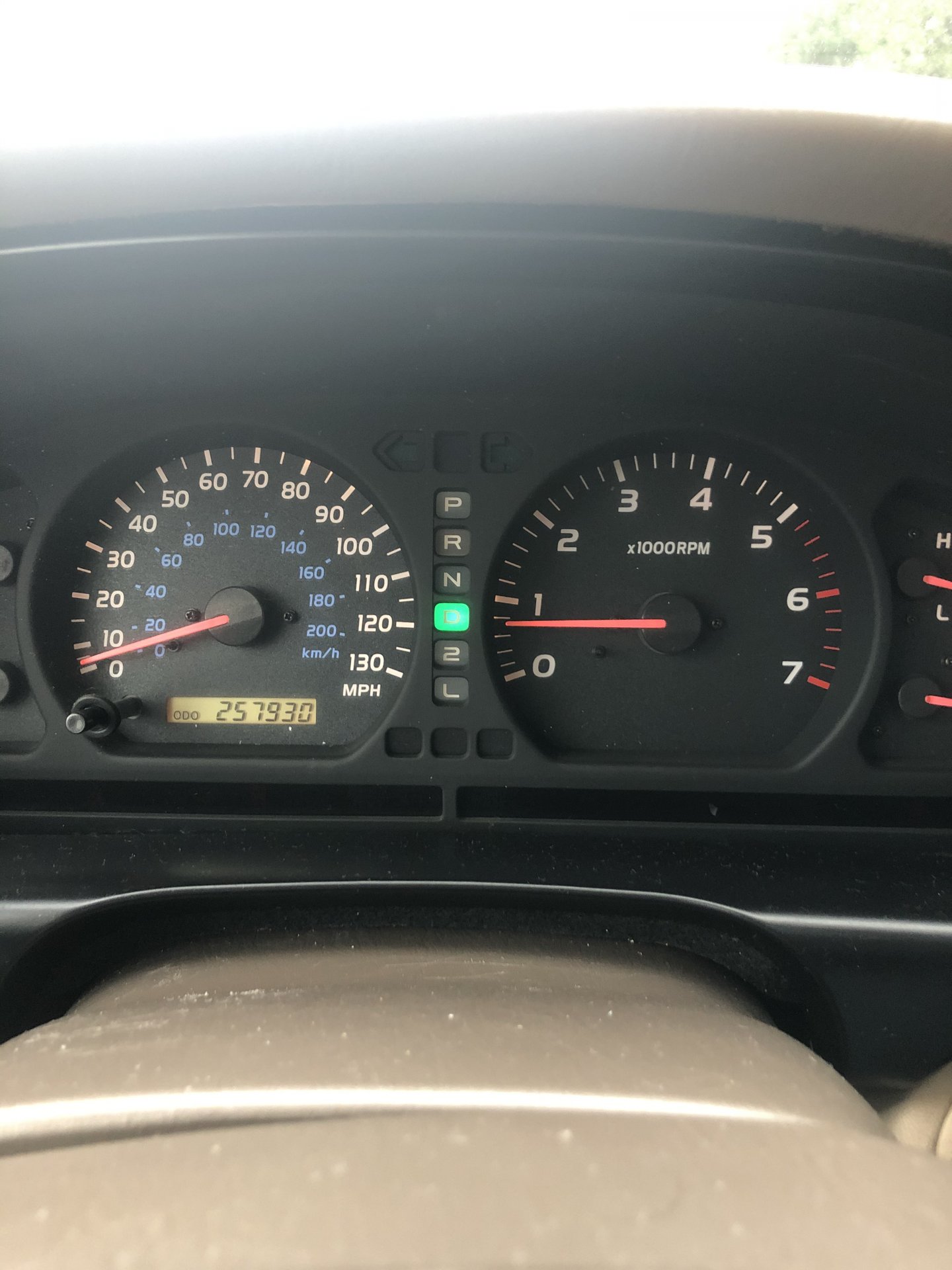 I know. I know. Poser pics but more to come later

Congrats! I personally would get the exhaust noise checked out to see what you are dealing with. Depending on your insurance you might be able to get a OEM windshield. I have state farm with their glass policy and it was no problem for me.

Great story! Glad for you. I’ve been looking for literally years but I’m on a cash crunch, and now prices have been rising! I think just diving in is a great way to proceed!

The other things you need to do is read everything Paul @2001LC has written, you’ll get a good idea on what things to check. One thing for sure is the brake system. There’s some things brake related under the hood that will need attention if they haven’t already been replaced.
M

Will do. Thanks for the heads up. Don’t need brake issues for sure!

Welcome! I'd suggest holding off on the windshield if it's not distracting while driving. Windshield replacements on these can lead to serious corrosion problems if not done far more carefully than your average glass job.

They are awesome vehicles. Some of the best built automobiles for their vintage. Enjoy it!

guardcompany said:
Congrats! I personally would get the exhaust noise checked out to see what you are dealing with. Depending on your insurance you might be able to get a OEM windshield. I have state farm with their glass policy and it was no problem for me.
Click to expand...

This... same with me and State Farm glass policy. Used on our '11 4Runner a few years ago and I think the cost for us was an extra $5-10 a month on our bill (if that). Well worth the investment to look into glass policy for your vehicle regardless of agency.

Your "D" light in the dash has probably been replaced (common). You can see the telltale scuff marks of the cluster removal on the upper clamshell piece of the steering column trim.

Enjoy the rig and congrats!
M

Yeah I’m sure. I guess after 20 years and almost 260k in miles in drive even a Toyota light bulb may burn out. Lol. I wonder if there is anyway to tell how many hours are on the motor?? 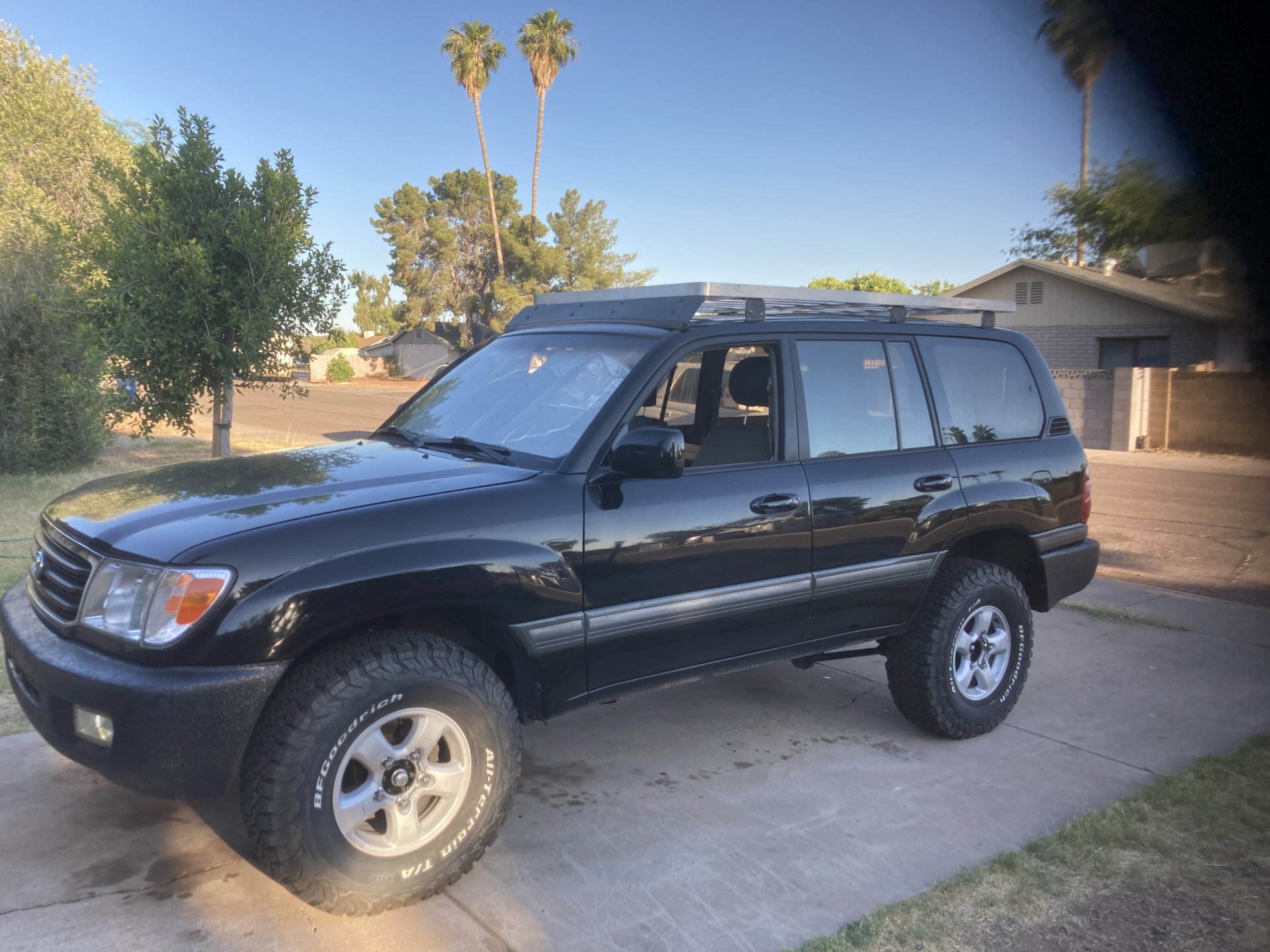 The exhaust tick you’re hearing on cold startup is most likely cracked exhaust manifold. If it goes away after warmed up then nothing really to worry about for now. It will get worse over time. Mine has worsened significantly in the last couple of months, to the point that my 100 sounds like a screaming tractor going down the highway. Putting new manifolds in next week...

I’ve got to ask, how does $12k for a 2002 with165K miles on it sound. One owner, records, nothing needed that I know of and had a few dings in the rear tailgate that were painted over?
M

Cool. I personally like the black although hard to keep clean. Do you have a lift on yours?? Roof rack is nice and is on my wish list. How many miles does yours have?? Got a price yet on replacing the manifold?? I will probably hold off as long as I can.
Infinity00-I guess it all depends on what you want. 12 is more than I paid but yours also has 100k less miles. I would have paid 12 for mine if it was exactly the same with 165k miles but they are hard to find in good shape around here.

Mac62 said:
Cool. I personally like the black although hard to keep clean. Do you have a lift on yours?? Roof rack is nice and is on my wish list. How many miles does yours have?? Got a price yet on replacing the manifold?? I will probably hold off as long as I can.
Click to expand...

Black is impossible to keep clean and hot as hell during summer...Turns the vehicle into a microwave oven. Certainly wish I had a white 100. I turned over 218k miles yesterday on this one. Built the roof rack out of scrap aluminum. Bought new manifolds, gaskets, studs, and nuts over the weekend for around $600 total for both sides, which should be here in time for me to put them on this weekend. If I were you, I’d hold off on replacing until the tick no longer goes away after warmed up. Took about 7 years from first manifold ticks showing up to full blown tractor that I have now.
T

My 01 has a tick on the drivers side when cold. Since it goes away fast i'm not going to fix it yet.
M

Cool. Yeah I will just wait. I probably won’t put 2k a year on it so hopefully it will be awhile before I have to deal with the headers. Thanks for the info
You must log in or register to reply here.