Talk me out of this FJ

D21FJ60 said:
Congrats, a solid truck !
If you are comfortable sharing, were you able to get them down at all on the price?
Click to expand...

Those 315's are just too much for me (although they look awesome and were awesome on the trails) but they just don't make sense for us. Plus they are pretty wore out. My wife loves the huge tires and is afraid it will look dinky with 285s but we'll see i guess .

Dealer said he had 17,700 in it (like you can trust a car dealer) Either way everything I saw looked like the PO did stuff the right way. It looks like he did the BMC to fit the 315s and actually welded the area that was trimmed so it looks almost stock. Only thing I need to do is clean all the winch connectors as they are really rusty. I also want to mount the control box under the hood

That doesn't seem to unreasonable, they threw in killer tires. Maybe get a second set of rims for the 315s?

I forgot the specs of the original listing. Are the diffs regeared?

BMThiker said:
I forgot the specs of the original listing. Are the diffs regeared?
Click to expand...

I don't think so, at least if they were the dealer didn't know. The acceleration seems pretty good to me, and the speedo is only off like 4 mph (my 100 with 33s is off 5mph with stock gearing) so maybe it is?

With 315s and 4.56 gears mine is off by 6-7% (depending on specific tire).
I ran 285s with stock gears briefly and it wasn't horrible, but acceleration suffered if you really wanted to hammer down.
And occasionally I ran 34x10.5 LTBs on the weekends, which was pretty awful on stock gears.

BMThiker said:
With 315s and 4.56 gears mine is off by 6-7% (depending on specific tire).
I ran 285s with stock gears briefly and it wasn't horrible, but acceleration suffered if you really wanted to hammer down.
And occasionally I ran 34x10.5 LTBs on the weekends, which was pretty awful on stock gears.
Click to expand...

Dang, well maybe it is regeared because with these 315s the truck seems to accelerate pretty well to me. If I go to 33s is it going to make it worse? I have no experience running with different gearing for tire size

My offhand calculations say you will experience a zippier ride with 285s, but overdrive will suffer. But you can play with the numbers on this site to get actual calculations.

is there a way to check the gearing? Will running 285s be more stressful on components if the FJ is regeared than if I just left 35s?

Jack up the rear axle and count rotations of the drive shaft versus the wheels. 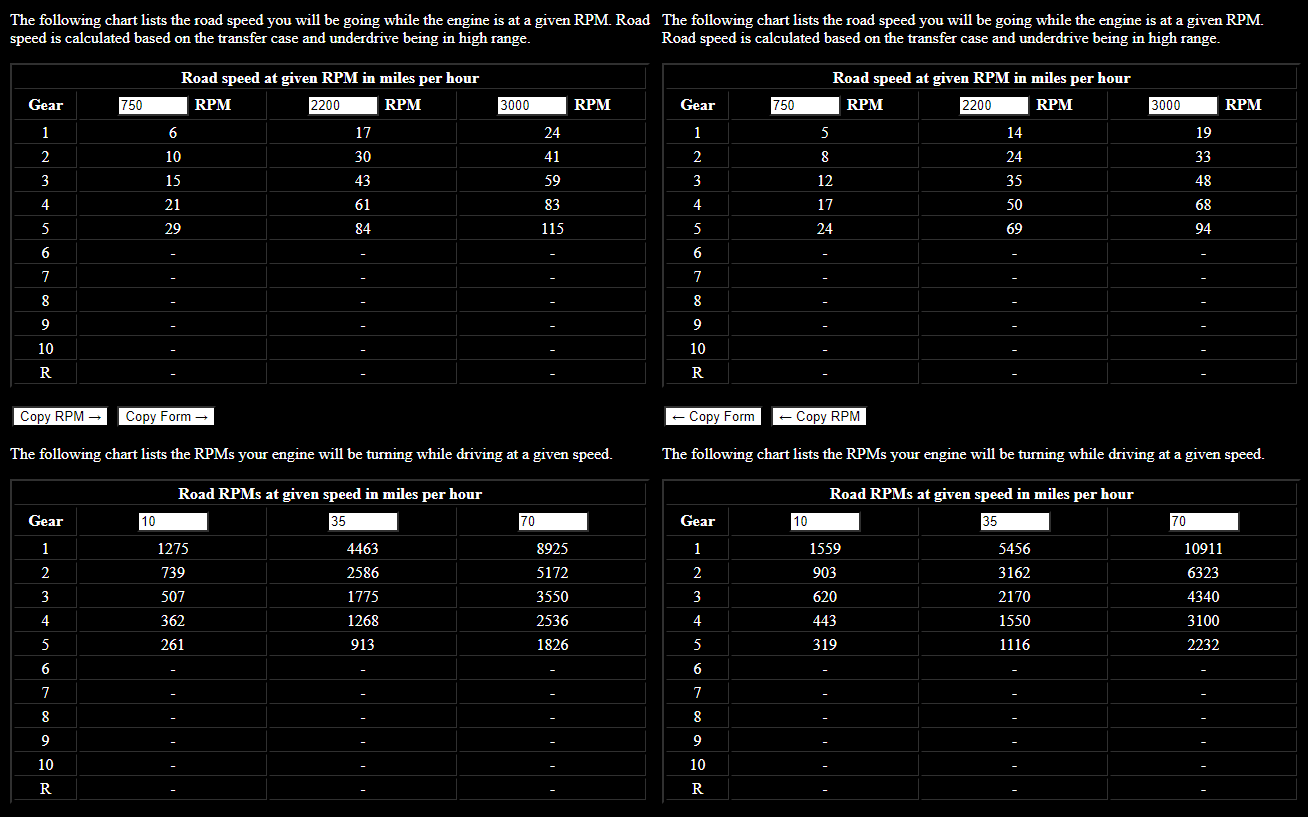 Thanks, looks like gearing was stock. I had an alignment done with the new 285s and my god was it out bad.

Those dont look bad at all.