Need some help on an idea. I have a dual battery setup with a hood mounted solar panel and I want the ability to shut off the solar without having to pull the fuse or disconnect wires. Really would like to do if from in the cab. Thinking a relayed switch would be the smartest, rather than just a switch with full solar power coming into the cab.

Also building up a Bussman fuse/relay box for other lights, accessories etc. Thinking I could use this also for the solar.

Would this work? Any easier/better ideas?

Couple of reason I want to do this:
- I have a voltage readout in the cab and would be nice to know the actual resting voltage of the battery without solar.
- I get some feedback on the stereo system from the solar controller when it goes through its desulfination cycle (confirmed this is normal from a tech at BatteryMinder), so it would be nice to disconnect the solar when the stereo is on (Stereo is connect to the AUX battery). The solar controller stops charging when the alternator voltage kicks in (via BlueSea ACR), but it still goes through a desulfination cycle even with 14V from the alternator.

Here is a diagram with what I am thinking. 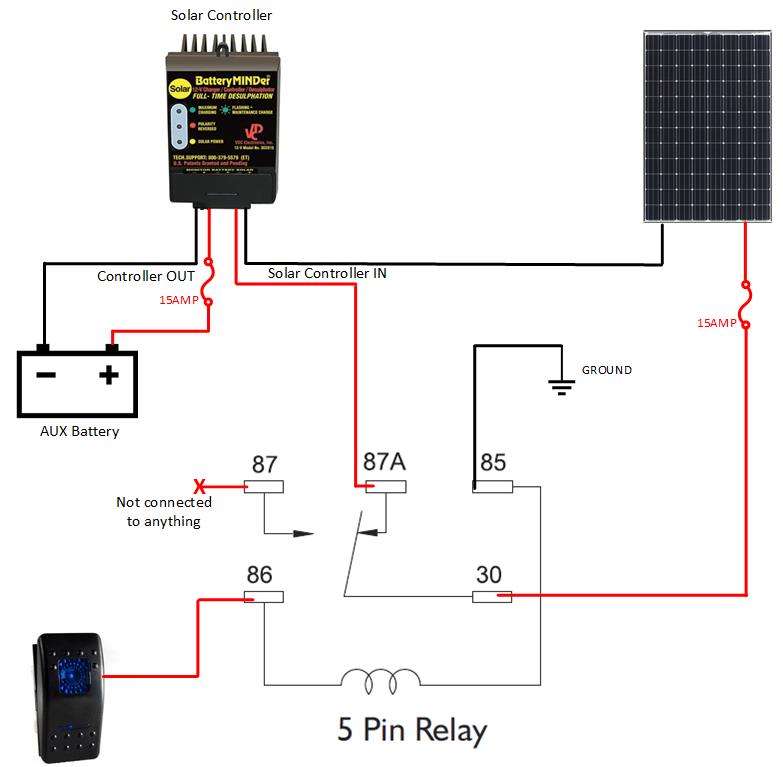 Where are you mounting the relay? Engine bay?

I suppose a relay is better in principle. However, 15A is not a lot and it's easy and cheap to get 15A switches. If you are going to have to draw wires into the cab for a switch anyway, I would also consider making that the full line, would save some work and wiring. Doesn't seem like a relay is compelling in this case, and they are not all rock-solid reliable.
OTOH, a more interesting solution would be a radio control switch with no wires into the cab at all...

george_tlc said:
Where are you mounting the relay? Engine bay?

Well, then I would wire +12V to relay 85 and have the switch in the cab then has one side to ground and the other side runs a single wire through the firewall to the relay 86. Basically ground switched and you have no issue if that wire shorts to the body since it is essentially the switched ground side. There's a reason that a lot of stuff in our vehicles is ground switched.

F
Solar 12 volt panels, is it better to wire two 100 watt panels in series or in parallel?

You might want to check that before taking your high-tech solar system out there in the boonies...