I'm building up a LX for someone and he asked me to use Slee's SS brake lines. I got the truck back a few weeks ago and he mentioned that the brakes seem to have faded a little since he took delivery of it.

While I drove it I noticed that the ABS would activate just before coming to a complete stop. The truck has 315s and was on dry pavement. It was almost every stop except for those time I was real easy on the brakes.

I took the tires off and found that the Slee front SS axle/caliper lines had started to come apart. The outer sheathing had cracked in several places and was causing the line to focus it's bend at those cracks especially when the wheel was turned.

I then ordered 4 new OEM lines to replace the Slee ones.

The ABS activation is gone but I've only driven with the new lines a couple of days.

If you used his SS lines you might want to check them out. These lines were only on a couple of months and driven about 2000 miles. 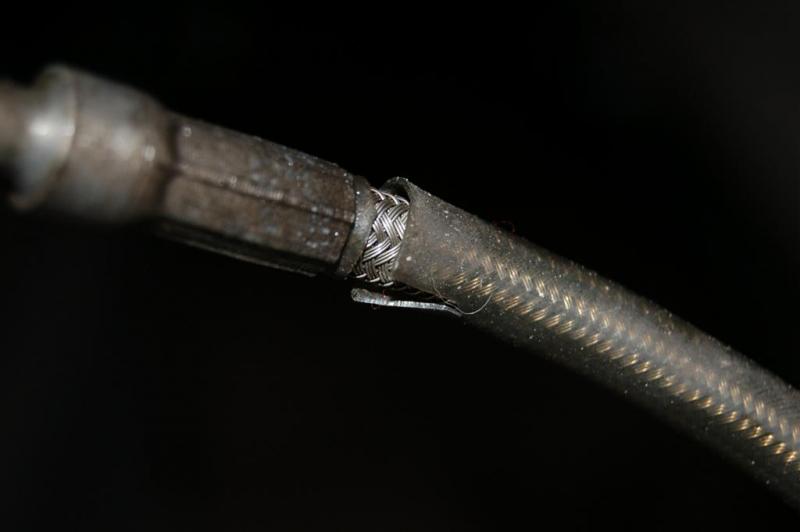 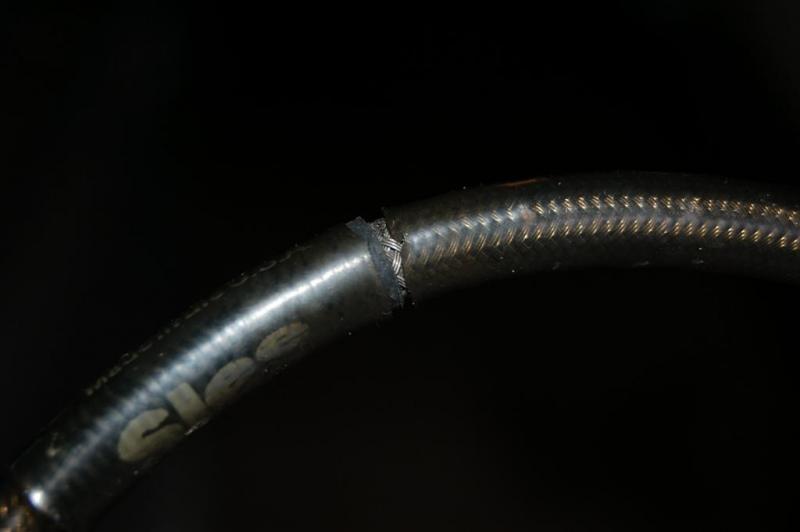 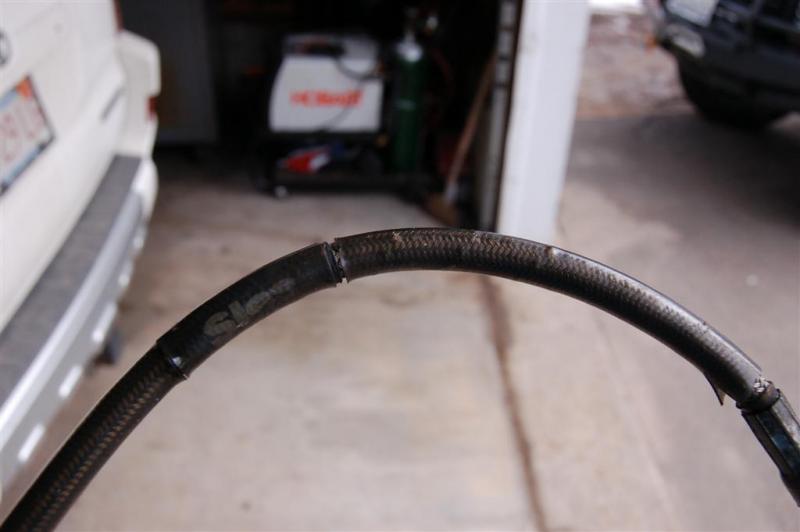 The outer covering has nothing to with how the brake line function. it is only there for looks and to keep the lines from rubbing on other parts (very abrasive). you can purchase brake lines with or without the covering and they perform the same..
Bret

Ps. i have a set from Man-A-Fre and they have nothing covering the stainless... http://www.man-a-fre.com/parts_accessories/StainlessSteelBraidedDOTBrakeLines.htm

blarsen said:
The outer covering has nothing to with how the brake line function. it is only there for looks and to keep the lines from rubbing on other parts (very abrasive). you can purchase brake lines with or without the covering and they perform the same..
Bret

Ps. i have a set from Man-A-Fre and they have nothing covering the stainless... Stainless Steel Braided DOT Brake Lines
Click to expand...

x2 Mine are the same way... there is some other problem going on here.

Maybe they were improperly bled when the Slee ones were installed? Now bled properly they are functioning correctly? Just my guess.

Actually my first guess is that Rick was joking here. He's obviously one bright guy and often get bashed when nitpicking Slee products. So I figured he threw this one out there for fun.

Location
Between the bay and the Ocean Vic Aus.

Ito find a rubber oem or "other" line that is an improvement over a braided line.

The plastic outer is purely a "looks" thing, just trim it off.

Sounds more like it was a brake bleed issue when fitted than a line causing the problem, fronts not bled properly, rears activating the abs when doing more work for pedal effort.

Seems you may have bled them better second time around.

Rick, here is a photo showing the brake line construction. The outer layer is primarily cosmetic but serve some protective roll. We have seen this before and spoke to the manufacturer about it. The function and safety of the lines are not compromised. As you can see there are a number of layers below the stainless that have to fail before the line will fail. Unless the line was leaking, this could not affect the ABS issue you are having. We can opt to have the lines made without this outer layer, but decided that even if they crack, it is still better to have it on the line than without.

If you want, you can send those lines back and we will send them to the supplier for comment.

I will add some drama to the story-

A friend of mine installed the Slee SS lines on his truck, and about 10K miles later experienced the same ABS problem- activation just before coming to a complete stop. Only one side activates, which makes the truck pull to that side. He removed the fuse that controls the ABS as a short-term fix.

I have the Slee SS lines, installed for about 2 years and maybe 15000 miles. Coincidentally, shortly after my buddy pulled his fuse, I started having the same problem with my truck. I pulled the fuse.

I haven't looked at my buddy's lines, but I did notice the outer plastic sleeve on mine has been cracked for quite a while. I didn't worry about it as I realized the sleeve was only cosmetic. I never dreamed the lines had anything to do with the ABS problem. I've been keeping an eye on these forums, waiting for someone else to start questioning the ABS issue, figuring that if I know of two trucks with the problem, other people must be having it too.

His truck is in the low 100K mileage range, while mine is at the high 100K range. I rebuilt the front axles on both mine and my buddy's trucks. My buddy's truck had new front calipers and rotors installed when I did the rebuild, while mine got re-used. He got new aftermarket birfs, re-using the ABS rings. The sensors on both trucks were cleaned, along with every other part, and I have high confidence in my abilities concerning the brakes and axles in general. Both trucks performed fine for a long period of time after the axle rebuilds.

We spent quite a bit of time bleeding the brakes on both trucks, and the brakes perform very well, so much so that I laugh when people complain about the 80 series brakes. I have no doubt whatsoever that I could lock the brakes if I desired. You can't ask for brakes to do better than to lock at speed. No work was performed to either truck for some time before the ABS symptoms appeared.

I haven't had time to start diagnosing the problem. I haven't been too worried about it, since my brakes work great and haven't locked in a few 'panic' stops I've had to make. I'm sure the large tires and my own braking prowess have something to do with that.

I'll be watching this thread with interest. I'm skeptical that the Slee SS lines are the culprit, but I suppose it's possible. Frankly, it would make my life easier if I knew that was the problem, 'cause I haven't been able to come up with any other explanation that would cover the symptoms. I still don't see how a brake line expanding could activate the ABS, which would normally activate due to differentials in wheel speed.

I just got back from a weekend in Vermont and there was no ABS issues at all. When I returned home there was a slight covering of snow and still the ABS did not engage when coming to a stop.

There was never any issues when I originally installed the lines and it's likely just a coincidence and it could return after some more driving.

All the other Slee lines have performed flawlessly and it was only the ones on the front wheels that started to come apart from the constant flexing and the fact that they are so short.

I never heard of any issues with these lines and thought it was new news and considering that the cracked outer layer forces the line to focus it's bending at that point I wanted people to be aware that they might want to check out their lines for fatigue in that area.

The weird thing is that the pedal feel is the same as before it's just that the ABS actuation is gone. Everyone considers the ABS sensors to be the trigger for activation but I'm thinking there is more to it than just that. I had the same activation on my truck and it had no front brake pressure at all. There was definitely no wheel lockup then and new frame/axle lines cured that problem.

Location
Between the bay and the Ocean Vic Aus.

The brake line doesnt "activate" the ABS, it simply transfers the fluid, the sensor is what controls the ABS acting or not, based on the hall effect sensor on the cv on the front.

The only way it could activate is a fault with the ABS unit, not bled correctly, or the sensor telling it the wheel is locked.

The ABS doesnt read what the fluid is doing to activate.

Assassin_Offroad said:
The brake line doesnt "activate" the ABS, it simply transfers the fluid, the sensor is what controls the ABS acting or not, based on the hall effect sensor on the cv on the front.

The only way it could activate is a fault with the ABS unit, not bled correctly, or the sensor telling it the wheel is locked.

The ABS doesnt read what the fluid is doing to activate.
Click to expand...

How does improper bleeding activate it?

-Spike- said:
How does improper bleeding activate it?

But all this is probably better suited for the ABS problem threads. I only posted this thread as a brand new line with about 5 weeks of use started to come apart and wanted people to be aware of it so if on older installs it had gotten worse they could take care of it. The fact that I had improper ABS activation was only the reason I started to look at things.

I have been using the Slee lines for 4 years now. Absolutely no issue; I'd have to agree, it is very unlikely that the plastic outer covering would cause any issue. Now I had experienced shattered/broken steel breaded lines with my previous truck and that had been due to the fact that my front end used to articulate (with 37s) beyond the length of the break lines. Over time it had started to crack and eventually failed. I am not sure whether or not the same thing happened with the lines you are talking about. I don't have sway bars under my 80 and it droops like crazy on the trail but not to the extent where it would stretch the lines.

3FE :: Where does this missing VCV(?) line go to the Throttle Body?

Soooo what the biggest winch you guys put on your Slee short bus bumper?