I have a 1985 FJ60 that until recently was running original heater and radiator hoses from 1985. I am redoing all the hoses, and I want to simplify a few things. First off, I want to bypass the rear heater since it never gets that cold where I live, and its one less thing to go wrong. Second, I could live without the oil cooler, which is really a oil heater.....and while im at it, I would love to eliminate the T in the lower radiator hose and find a solid one piece hose to replace it, as that would be less to go wrong. I do want to keep the dashboard heater. So im thinking to keep the water takeoff on the rear of the head to feed the heater, but the question is, where might I put the heater return line if I eliminate the T fitting in the lower radiator hose? Could I run the heater return line to the port that was formerly the return line for the Oil cooler return port on the bottom of the water pump?

Here is the heater delete. Gain a space under passenger seat and have less points of failure. Did it a couple years ago.

So in the middle of my new carpet install and had looked at taking the heater our to make it easier. Ordered new hoses, etc... and then I ran across some threads that mentioned deleting the rear heater altogether. I am in Texas and in the winter we drop down into the 60s for a couple weeks so I...

Bypassing the oil heat exchanger is a bad idea. Doing so will accomplish nothing good unless it's leaking and can't be fixed or replaced.

I'm not sure why the OP says the oil cooler is really heating. Sure, when the engine is cold the oil cooler might help bring the oil up to operating temperature--but the water is cold, too. However once at "steady state" my experience with other engines is that the oil temperature generally runs in the mid-200's F and the water temperature is high-100's F. The water is colder than the oil, so the oil is being cooled.

2mbb said:
I'm not sure why the OP says the oil cooler is really heating. Sure, when the engine is cold the oil cooler might help bring the oil up to operating temperature--but the water is cold, too. However once at "steady state" my experience with other engines is that the oil temperature generally runs in the mid-200's F and the water temperature is high-100's F. The water is colder than the oil, so the oil is being cooled.
Click to expand...

I could be wrong, but I can imagine antifreeze at 180 degrees is doing much actual cooling to the oil. Does the oil really run hotter than that? Most actual oil coolers used on performance vehicles are finned arrangements using air to cool the oil, which even on a hot day would be much cooler than 180 degrees. Again, I could be wrong.

The 2F pan holds 8-1/2 quarts of oil. It has been said by many sources over the years that starting the engine and driving it the first few miles creates the most wear on the engine. The sooner that 2+ gallons of cold oil in the pan can get up to temperature, the better. Less wear.

Once the oil gets hot, the heat exchanger (oil cooler) helps keep it at a stable operating temperature. Sure a big stacked fin oil cooler mounted in front of the radiator will cool oil better - but it will also keep it frozen on cold days.

Never in my experience have I ever witnessed anyone on this website or anywhere else out think and out engineer Toyota engineers. They'll try to modify this or that to make something "better" but invariably when all factors are taken into consideration, the end result is (almost) always worse.

When in doubt, don't. Toyota figured out the hard stuff long ago through testing.

There were lots of 2F engines produced without the oil cooler assembly; It's really for areas that see excessive temps, in both directions. In North Cackalacky you probably don't need it. To delete, you'll need to find an oil filter bracket w/o the cooler casting and either cap your water pump or install a new one without the oil cooler feed nipple.

Also, the quality of engine oil has greatly improved since 1985 so I'd use a Synthetic Blend with high zddp if you remove the cooler.

edit: Thinking about this, if your aim is to simplify, the simplest thing would be to just replace all the old hoses, clean and paint existing components to retard rust, and just replace hoses with good aftermarket if you don't want to use Toyota. Plenty of threads on rear heater delete with part #s for aftermarket molded hose to make is very easy. That's what I did. 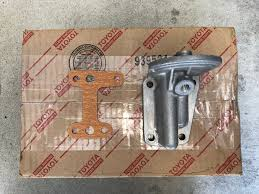 In some sense, a main purpose of the cooling circuit is to cool the oil. Without it, the oil gets too hot and doesn't do it's job. The oil cooler just adds additional heat transfer area. But I do like the comments about the cooler helping keep the oil temperature stable and mostly benefits when ambient temperature is at either extreme.

Thoughts of a GM V8 heater hose layout just isn’t practical. It’s not how these engines and chassis HVAC were designed.

Personally, I wouldn’t do anything beyond looping the rear heater out of the equation.
You must log in or register to reply here.

Hose bracket? Where does this go? (solved)

Hose bracket? Where does this go? (solved)