replacing fusible link with breakers. What do i need to know

I forgot to mention but typically these type of breakers can be “pulled” or opened so you can isolate the affected systems protected while working on those systems.

Azca said:
Excellent example of a breaker's superiority to a fuse in a specific application! Not sure if these are accessible to the pilots but, on the surface, finding the right fuse at 30k feet in a stressful situation might be a tad difficult!
Click to expand...

Yes they are accessible to the pilots. Maintenance also use them to isolate or remove power in order to perform maintenance tasks/make systems inop while aircraft is in hangar undergoing routine maintenance to prevent systems from activating while working on other systems that are incorporated in the whole aircraft.

A typical rule of thumb is one reset only, if it pops again no more resets allowed. Sometimes no resets are allowed if it pops.

mudgudgeon said:
I'm currently rebuilding my 1fz-fe, and tidying up my engine bay and accessory wiring while the engine is out.

PO has replaced the main 100amp fusible link with a 100amp maxi-blade fuse in an inline fuse holder.
Its been kind of poorly done and I want to remove it. I accidentally shorted battery cables while working on stuff, and popped this fuse.
I tried several spares shops for replacement fuse, and had to order spares in (not great if a fuse blows in the back of nowhere(

I've got OEM fusible links on backorder with Toyota Japan. The 6-8week delay in sourcing replacements has me thinking about replacing all the fusible links with circuit breakers at the battery.

I know enough about them to make myself look silly. So I'm looking for tips. I did search, found some helpful stuff, but nothing directly related to replacing fusible links.

Part of my thoughts is that having a breaker pop while on a trip, you give it time to cool down. Investigate for a problem that may have caused it to trip, and then if all good reset, and you're mobile again.

I believe there's different types of breakers, with some that cope with momentary spike in current. Beyond that, not really sure what else I need to know.

Is there any inherent disadvantages of circuit breakers that would rule this out as a feasible solution?
I know initial cost is gonna be a lot higher than using fusible links. I'm more interested in a foolproof solution that isn't relying on me carrying spare fusible links, or having to do a trail repair on a blown link?
Click to expand...

Great thread and invaluable input on this!

My only thing would be going back to the reasoning that the factory FL's are not satisfactory in the first place.
If it's because they are failing in an otherwise factory environment, then obviously a thorough look-see-hunt-down for the cause is required.
As others mentioned and I agree, FLs are the most compact and efficient device for the purpose.
Carry 4 of them if you're that concerned. Especially with that brand new sweet-running engine you got there.

If you want a fuse but not a FL, MRBFs would be the next most efficient and compact alternative to FLs. (but not cheap. Or ubiquitous)
Otherwise, 'all I got' for the FL team is that breakers can heat soak, and I haven't seen a fuseable link or fuse do the same.
full disclosure - all 3 are deployed in my rig - OEM FL, MRBFs, and breakers.
Last edited: Oct 30, 2021

LandLocked93 said:
MRBFs would be the next most efficient and compact alternative to FLs. (but not cheap. Or ubiquitous)
Click to expand...


These look like a good option for fuses.
Compact installation
Compact for carrying spares
N

I think a breaker is a reasonable option, BUT, make sure it's a good brand, and you buy it from a proper supplier. I'll happily buy a 12V relay on ebay direct from china for $1, but safety gear involving hundreds of amps, with all the fakes and dodgy gear out there, you need to be looking at a proper electronics supplier like these:

When I did wiring for my second battery, I went with MIDI fuses, specifically the MEGA line from Littelfuse:

https://www.farnell.com/datasheets/683342.pdf
And there are nice inline holders for it too:

https://www.farnell.com/datasheets/2099352.pdf
I carry a few spares in my glovebox. But if we're talking trail fixes, you can always bypass the fuse entirely if you like to live dangerously.

I'm not opposed to the idea of a breaker, but a fuse for me felt simpler and more sturdy for such a high current circuit. That combined with cost made me go the fuse route in my setup. A really professional high-end breaker would work I'm sure, but at the time my budget wouldn't have stretched far enough to get one I would have been happy with in this application.

I have been using MRBF fuses as primary fusing for years with great results. I use the Blue Sea double Best price on the fuses that I have found is Delcity. Just throw a few extra in the glove box and drive.

LandLocked93 said:
Great thread and invaluable input on this!

My only thing would be going back to the reasoning that the factory FL's are not satisfactory in the first place.
If it's because they are failing in an otherwise factory environment, then obviously a thorough look-see-hunt-down for the cause is required.
As others mentioned and I agree, FLs are the most compact and efficient device for the purpose.
Carry 4 of them if you're that concerned. Especially with that brand new sweet-running engine you got there.

If you want a fuse but not a FL, MRBFs would be the next most efficient and compact alternative to FLs. (but not cheap. Or ubiquitous)
Otherwise, 'all I got' for the FL team is that breakers can heat soak, and I haven't seen a fusible link or fuse do the same.
full disclosure - all 3 are deployed in my rig - OEM FL, MRBFs, and breakers.
Click to expand...

Fuses are just as susceptible to heat or heat soak as a breaker. Modern fuses and breakers have current limiting (from faults and shorts) as well as overload capabilities. When looking at overload protection, both overcurrent protective devices (OCPD) rely on the temperature the device "sees". The warmer the environment they are in, the earlier they will trip or fuse. This must be accounted for in the design. The problem both suffer is the extreme temperatures they are installed in.

As they get hotter, you must increase the size of the OCPD to compensate for the increased temperature (all manufacturers have temperature curves for this) but, as the device works in a colder environment, it should be decreased in size. The overload device (whether a fuse or bimetal strip) rely solely on temperature to operate. Additionally, the wire connected to the device acts as a heat sink to remove heat from the device (the OCPD is designed with this in mind). Moving the OCPD to inside the cab may actually make things worse as now the wire and equipment, which may be at a substantially different temperatures as compared to the OCPD, may be working harder due to the heat and the OCPD, in the colder environment, may not know or see this and cannot properly protect the wire/motor/equipment. This too must be accounted for in the design.

When considering OCPDs, it is critical to pay attention to the wire as well as the OCPD. One of the jobs for the OCPD is to protect the wire's insulation. As the temperature of the wire exceeds the insulation's temperature rating, it rapidly degrades. Every 10 degrees above the rated temperature cuts the insulations life expectancy in half. This is exponential. Raise it to 20 degrees, and you cut the life expectancy of the insulation by half again. Take a look at the wiring next to our EGR pipes, the load on the conductors, in and of itself, was not the sole reason for failure, the heat from the pipe in addition to the conductor generating heat, movement and contributory heat from other conductors, causes the failure. It does not help that the conductors are bundled together, as this entraps heat from other conductors and only makes matters worse. (For critical systems, do not bundle wires, isolate so air flow can help cool the wire). In the end, the larger the wire, the cooler the wire runs and the greater the wire's life expectancy.

Back to the OCPDs. Many fuses and most circuit breakers (NOT ALL!) are designed to act upon overloads and short circuits. The midi fuse mentioned here is an example of a dual element time delay fuse. Breakers, depending on style, can also us be inverse time devices. What the time delay, or inverse time, features are is a way to allow temporary overloads (high inrush) to occur without opening the device. Motors and LEDs both have high inrush currents. The OCPDs may allow up to six times their rating to flow, for a very short period of time, to allow the device to start. The temporary high inrush does increase heat on the conductors and OCPDs but, due to the very short duration, pose no real threat of degradation to the devices. See the Midi fuse chart below from their spec sheet. Also note that this is based upon an ambient temperature of 23 deg C. and you can see the derating for ambient as well. 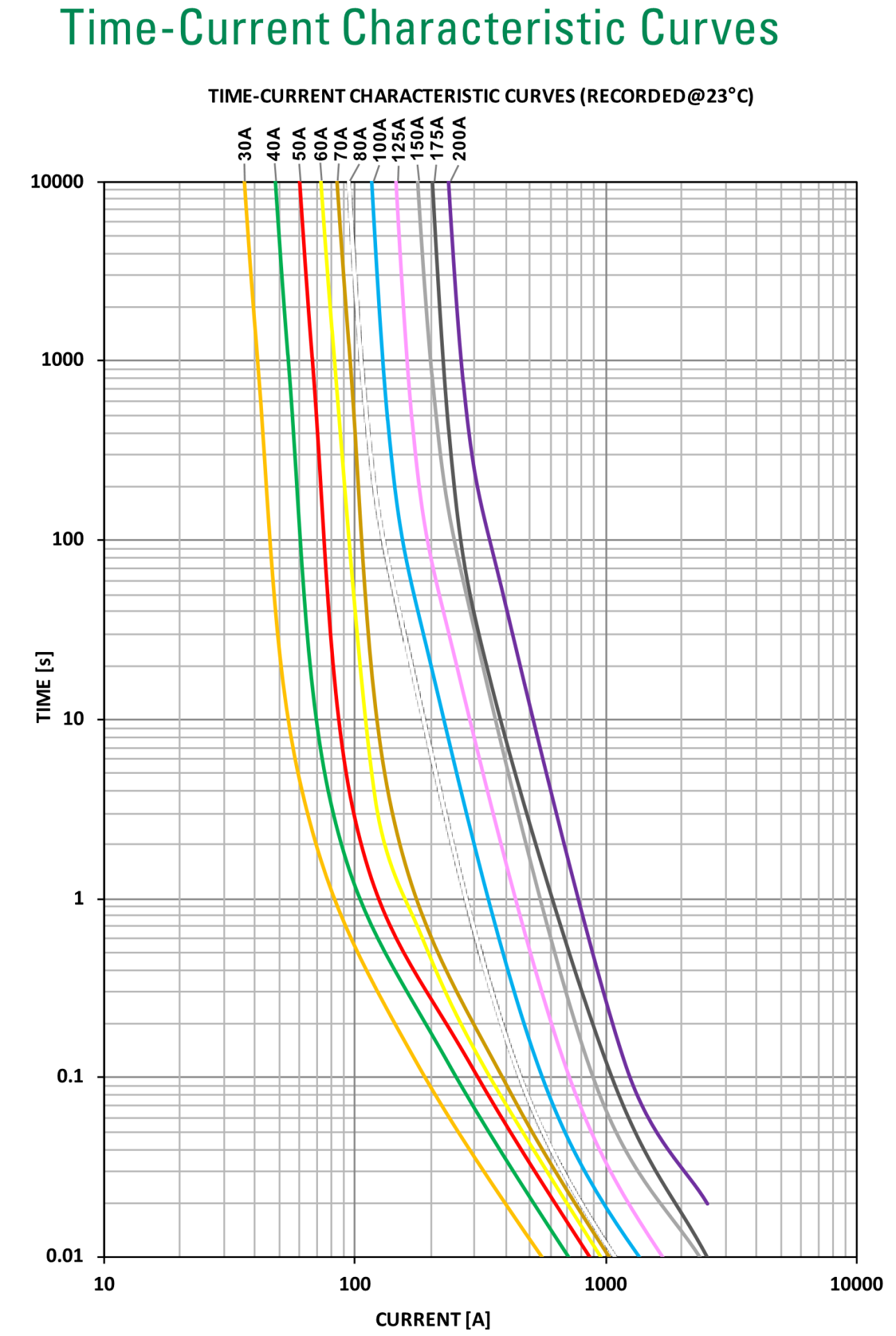 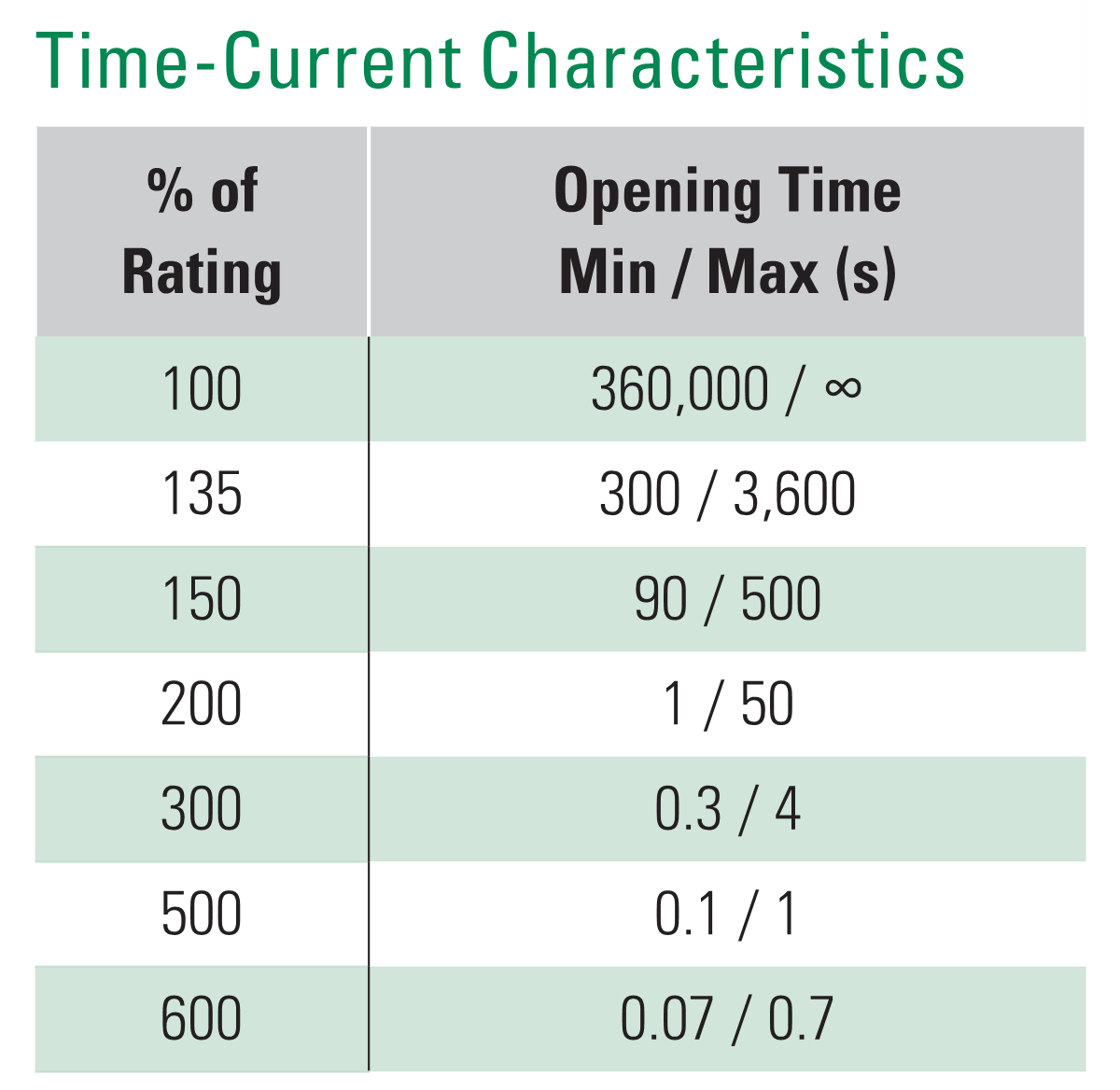 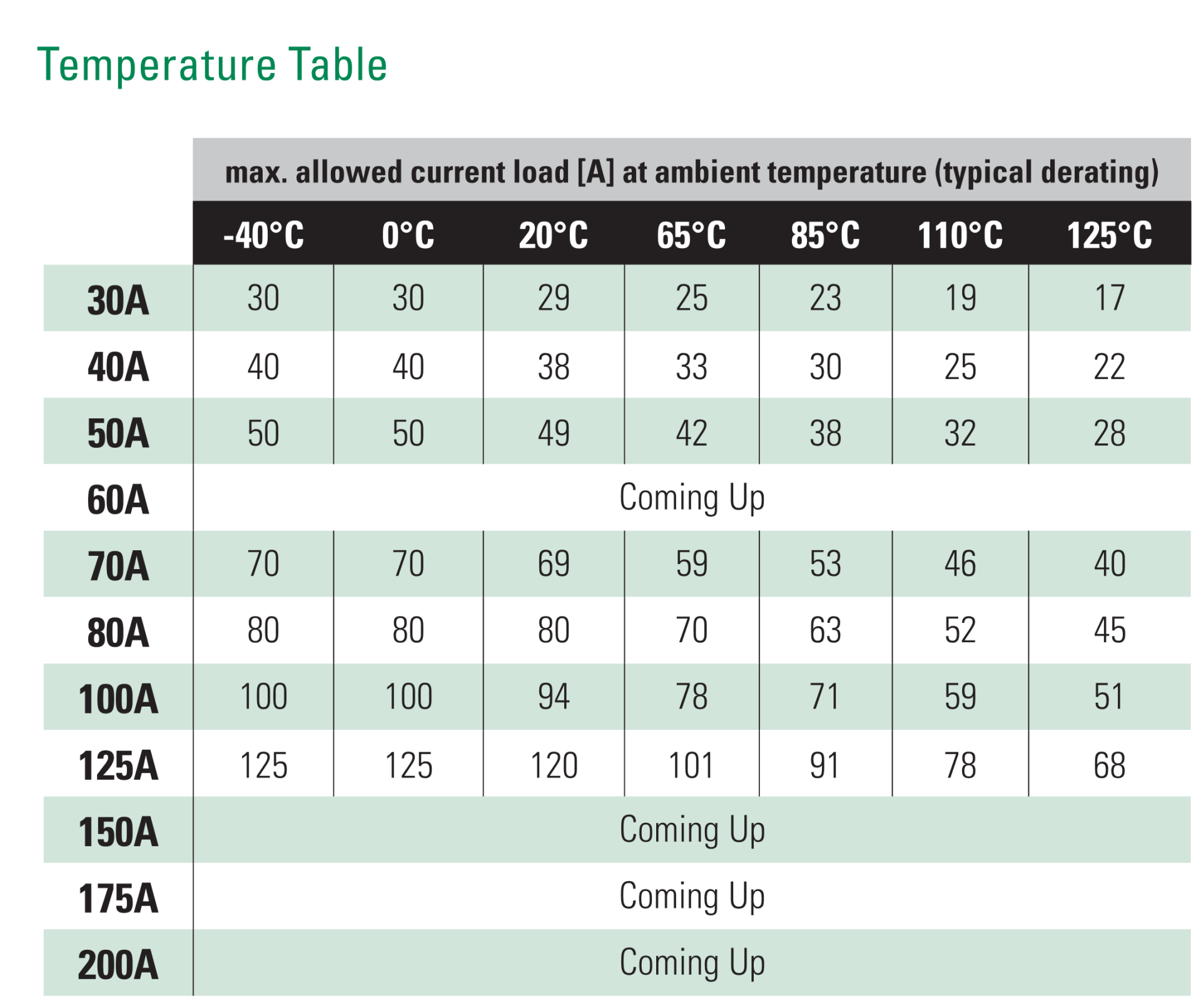 What these charts shows, as an example, is if using a 100 ampere fuse, the fuse will allow up to 200 amps of current to flow between 1 and 50 seconds before fusing. Obviously a long time for an overload with this fuse and, if using it, I would increase the wire size accordingly. You can tailor the fuse by using different classes or types of fuses to obtain quicker responses or even longer delays. Again, you need to account for both in your designs.
Last edited: Oct 31, 2021

Azca said:
Fuses are just as susceptible to heat or heat soak as a breaker.
Click to expand...

Response! lol more great info
Guess I've been lucky thus far not having to deal with all that.

I have some Maxi fuses on the shelf ready for when I get around to it.
Main reason is that the fusible links for my HDJ81 are NLA.

If you graphed the internal temps on breakers and fuses, I think you would see much wider temp swings, with steeper curves, with the fuses only because of mass. The breakers would have a much more gentle slope and a wider plateau due to the greater mass and being encased. Both of these will impact the overload function on the devices but would have little impact on clearing a faulted circuit.
You must log in or register to reply here.

B
Any difference between a RHD and LHD drag link and tie rod?

What do i need to look for in a lift kit?