I'm finding a whole lot of useful stuff on here...it's a live service knowledge base unlike anything else. Might as well intro and try to mix in.

Got a pretty good deal on an '05 LX470 in gray with 246k back in July for only 4,300. Body condition would be somewhere between 8-8.5. Frame had surface rust with no visible structural damage but the vehicle had almost no steering. I took a chance and bought it and seeing steering is better at higher speeds, took an even bigger chance and drove it 25 miles home.

Upon closer inspection and messing around, here's the list of surprises I found:
• No steering...but knew from beginning - replaced rack, pump + reservoir...95% fixed
• Doors lock only, both switches and key fob. - replaced driver cabin junction box/ecu. fixed.
• Liftgate pretty badly rusted by handle and license plate lights - need to do
• Outer liftgate handle missing and inner mechanisms are broken - replaced inner + outer handle. fixed.
• Steering reservoir screen is punctured - replaced.
• Mismatched tires - picked up a pretty new used set of Michelins for almost nothing
• Driver seat switch buttons loose...doesn't work - replaced with seat switch from ebay. fixed
• Steering Wheel doesn't tilt - tilt motor replaced. fixed.
• After checking out door locks, speakers look torn but sound ok - need to replace eventually
• AC Fan blower sounds obnoxious and smells funky - cleaned out cabin filter (pita) and replaced blower motor. fixed.
• ABS Lights came on for a few minutes...have not been on since - need to look into
• AC did not work - made MG CLT relay accessible in my 05. ended up being unplugged pressure sensor. fixed.
• Hood + Liftgate struts were shot - both replaced. fixed.
• Rain sensor not working...auto wipers come on randomly and doesn't when it rains - sensor tape ordered. hope this is it.
• Rear defroster doesn't work - need to look into
• Power mirrors doesn't tilt/pan - replaced. fixed.
• Shock absorbers all look pretty bad...but I had plans for new shocks anyway - need to replace + diagnose whole AHC system
• Wiper blades are nasty and aftermarket - oem ordered
• Aftermarket remote starter with dangling wires under steering wheel - a few wires "fell out" during junction box swap. taped off any exposed ends and bundled/tucked it away for now.
• Some leather wear...not sure if I can fix myself - need to look into
• License plate trim (?) piece is loose on one side - need to find clips...looking into this soon.
• Sheet metal under rear bumper had a big hole rusted out - going to address this later on.
• Timing Belt - need to do this sooner rather than later.

On top of that...I just reached back out to owner a few days ago asking when the last timing belt change was...and he did not know what a timing belt was. He had the vehicle since about 70k miles according to carfax, so I'm assuming it was never done. I'm going to document repairs that I find useful to others and will post on here...second post I'll make a list with links. Will add pictures in a little bit...some of the problem items have already been addressed so pics wont reflect it.

First order of business, I ordered a new (used) power steering reservoir and flushed out the fluids. Steering improved a little bit but not much. Changed out the steering pump...improved a lot but still bad. Ended up getting a good looking used rack on eBay and found a shop to install it for under 800 including the parts. I got my steering back...but at low speeds and parking, sometimes it still feels just a tiny bit funny. I feel this is going to be a longer project than anticipated.
Last edited: Sep 15, 2022

Start checking bushings, they can cause clanks and loose feeling steering.

I ordered stabilizer + sway bar bushings. I'm seeing a lot of rubber bushings I don't know the names to are worn and cracked. Definitely need to get them in. Also had the driver side hum on acceleration from a stop 2-3 times. Can't reproduce it now but from random internet reading I'm thinking maybe CV axle...could explain the steering still feeling just slightly not right. (low speed like during parking)

Also saw a tip to another new owner on here a week ago to check heater tees. Both of mine crumbled when I touched them...changed them out last weekend. Scary thing!

CV or wheel bearings? A bad CV will click more than hum in my experience. Bearings hum and if you leave them go you’ll hear them grind… I had a friend drive his 4R bearings till they were screaming because he was waiting for the full assembly(3 weeks) instead of pressing the old ones out and pressing new ones in.

NE Snowman said:
CV or wheel bearings? A bad CV will click more than hum in my experience. Bearings hum and if you leave them go you’ll hear them grind… I had a friend drive his 4R bearings till they were screaming because he was waiting for the full assembly(3 weeks) instead of pressing the old ones out and pressing new ones in.
Click to expand...

With suspected near non-existent maintenance, it could be anything I guess. The hum accompanied a slightly but just noticeable weaker acceleration for just a few seconds and only from a complete stop, accelerating hard. I couldn't reproduce it after the few times it did it so I'm second guessing myself.

When accelerating from a stop or low speeds, I would hear and feel a thud from under... Both forward and reverse. I checked the tranny mount and it was actually pretty new. That's probably another reason to suspect cv.

hickuptruck said:
Damn 4300 for a lx470, good deal even with that condition
Click to expand...

I'm probably about 6600 in so far...I can't complain! Really wanted those headlights from bxbuild and almost pulled the trigger over labor day weekend but decided I better fix the more urgent stuff and timing belt job before going for aesthetics.

@2001LC Should be able to point you in the right direction with the common driveline clunk.

The 2UZ 4Rs have it too and it’s normally greasing the zerks on the driveline but Hundys are a bit different IIRC. Let some other members chime in before you tackle CVs. If your boots are still sealed it’s pretty uncommon to have problems with them.

My thunk has gotten to the point where I will spare no expense and go to the ends of the earth to fix. Re-greasing was making it better, but not completely solving it. However the rear was re-greased about two months ago and now it is thunking worse than ever. About 18 months ago I had the...

NE Snowman said:
@2001LC Should be able to point you in the right direction with the common driveline clunk.

The 2UZ 4Rs have it too and it’s normally greasing the zerks on the driveline but Hundys are a bit different IIRC. Let some other members chime in before you tackle CVs. If your boots are still sealed it’s pretty uncommon to have problems with them.
Click to expand...

Started reading that big thread the other day but found it to be a little overwhelming. I've done just basic repairs and maintenance and electronics up until this point and haven't really been under the car or under the hood much. Last year I tackled my 05 LS430 timing belt successfully so there's that. Will dive in and get to the bottom of it. Thanks... Gonna have to learn some new vocab it seems.

In the meantime, here are pictures of the cv boot on both sides. Looks dry, but driver side definitely looks like something leaked into the ball joint and tires. Maybe previous owner cleaned it up? 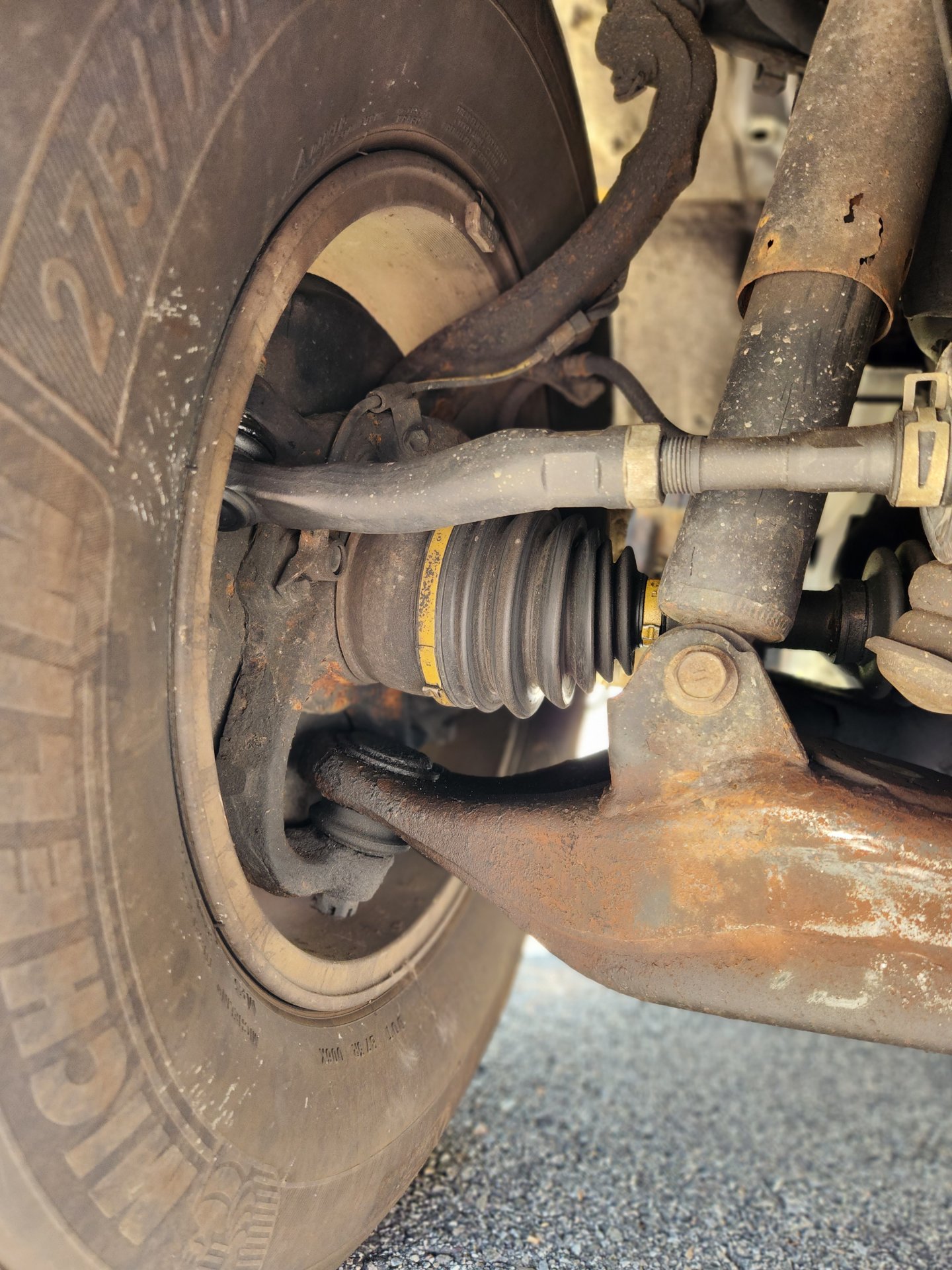 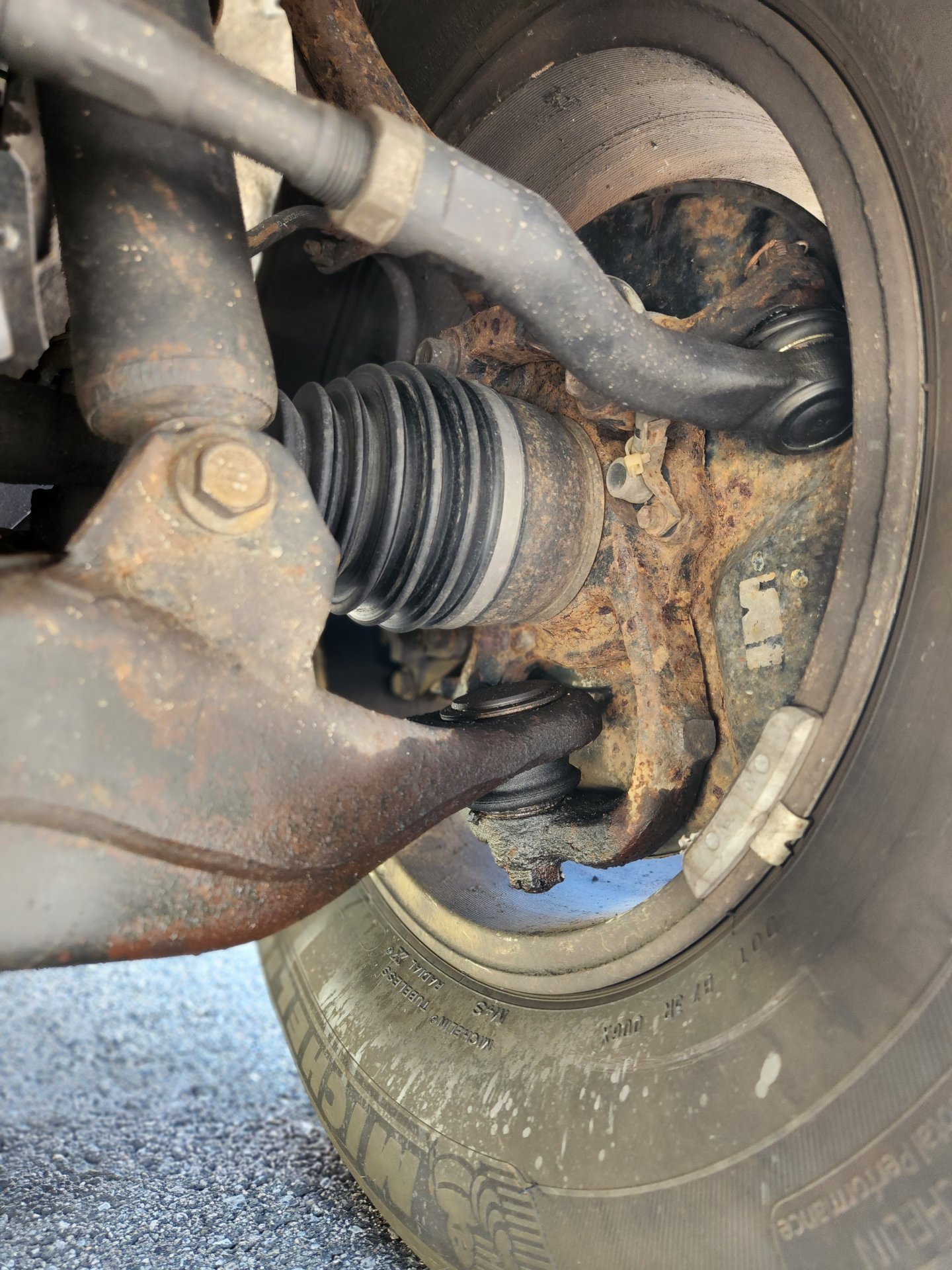 Edit: Actually...I got those tires recently and the grease marks are definitely new.
Last edited: Sep 15, 2022

Normally the boots tear and sling grease everywhere. At least that’s what happened to both my 4Rs. I threw aftermarket’s on one and 3 years later I’m pretty sure I can hear it click. The Yodas i rebooted with 180k are smooth on my second 4R

NE Snowman said:
Normally the boots tear and sling grease everywhere. At least that’s what happened to both my 4Rs. I threw aftermarket’s on one and 3 years later I’m pretty sure I can hear it click. The Yodas i rebooted with 180k are smooth on my second 4R
Click to expand...

Got it. Upon a closer look... It looks like black oil and not grease. My brake fluid is clear so not that... Maybe the hydraulic shock is leaking. No surprise there but I'll look more to confirm later.

Over the last few days, I removed the bulk of the rust in the underbelly with 36 grit flap wheels and finally pressure washing all the dust off, which surprisingly removed a lot more flakes. Majority of the rust was surface and looked superficial except for the rear right sheet metal under the bumper. There's a hole there the size of a baseball. Most metal surfaces are smooth just without paint but not much pitting. I think I'm going to use surface shield and drive for a few weeks to see if there's any more scale to loosen. Then I'm going to wash it all off and prime + paint before using more rust inhibitor. Surface shield if I find it to perform well.

Also installed the piece of double sided rain sensor tape today and the sensor is working normally now. Still have the rear defroster to figure out... Will have to search on here if anyone made a tutorial on that yet.

Ordered molly grease, arriving mid next week. Will try greasing the shaft first to see if that helps with the clunk.
You must log in or register to reply here.