It's frame has the designation of 2FJ40....and I think I read that meant that even though the year it was made was actually a 1962 even though it says 1963.

Am I correct? If so, does it matter? Is there anything I need to be looking for as I continue to read the user's manual and maintenance guides for my rig?

BTW, the type is FJ40L
Told ya it was inevitable....my last name is Wheeler!

yes it is a 1962; as shown by your vin number.......... from my understanding this is fairly common as some early FJ40s and FJ25s too sat on the dealer lots for a while before being sold and registered

Location
NW side of chicago

This is very common. Model year almost always start a least a couple of months before end of the year before. I have an FJ25 titled as a 1961 with production in 1960. The only thing I find funny is AZ shows it first being registered in May of 1960 Just seems a little early to call it a 61.

I think I have you all beat.

My "63" rolling chasis. Quite the nightmare getting the title transferred over to AZ from CA. 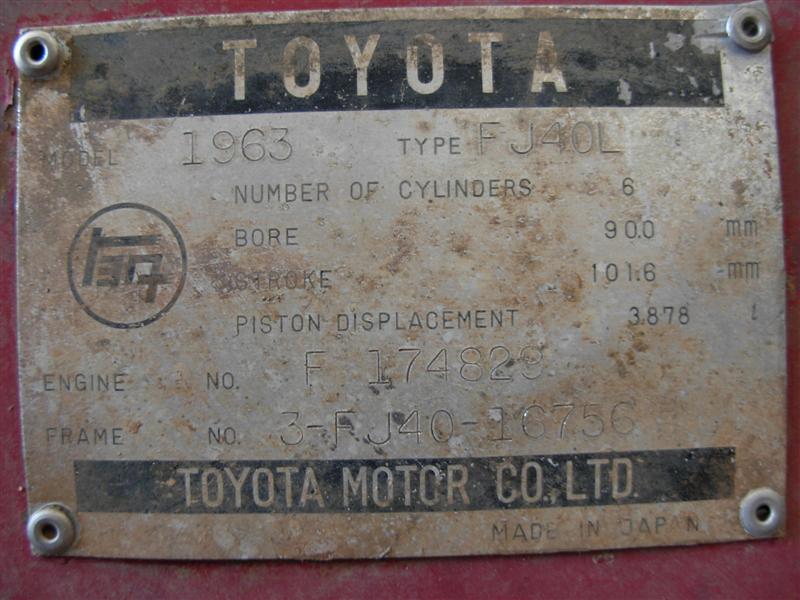 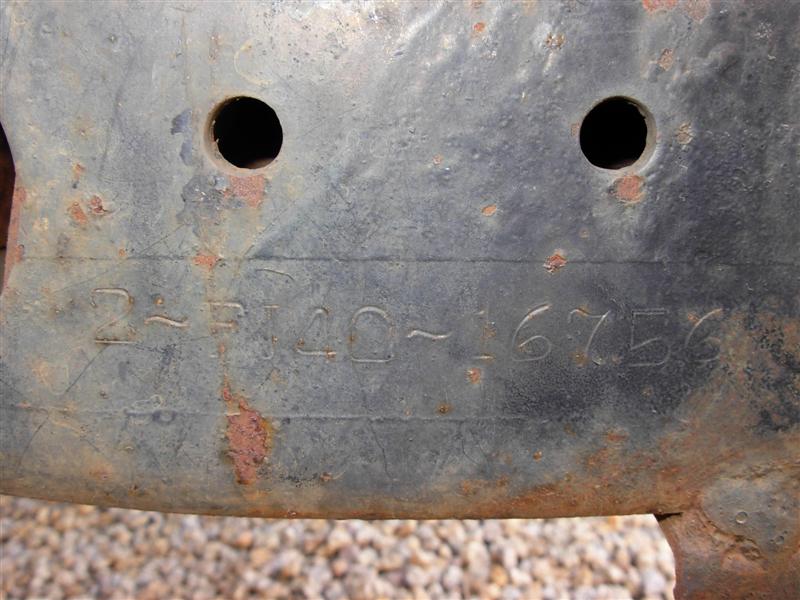 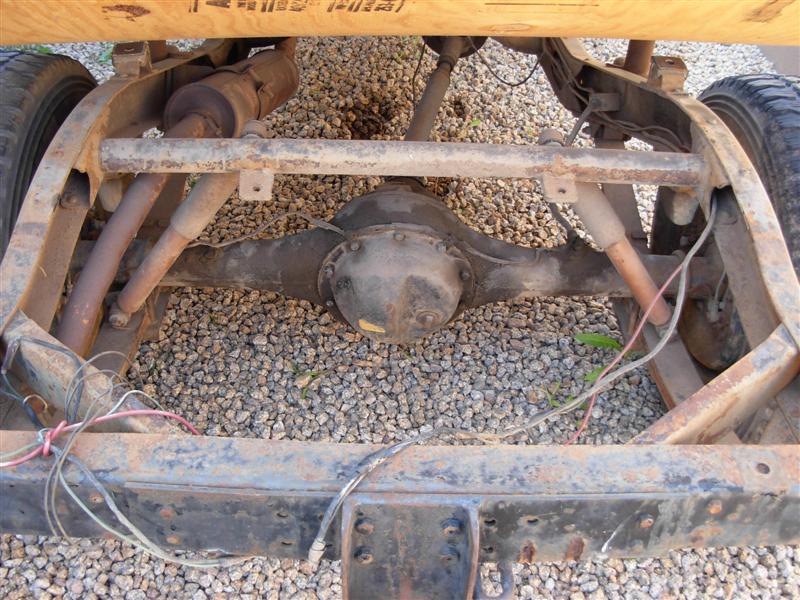 KingBeeIII said:
My "63" rolling chasis. Quite the nightmare getting the title transferred over to AZ from CA.
Click to expand...

I can see your problem the first number in each don't match which is the year of production. My guess is the production year is 62 with the mistake made when stamping the VIN plate. The frames I'm sure was stamped in Japan, with the VIN plates being done here in the states. That'a why there are a few FJ25s title as late as 63 when production in Japan ended in 1960.

KingBeeIII said:
My "63" rolling chasis. Quite the nightmare getting the title transferred over to AZ from CA.
Click to expand...


Yes, I got shot down at one DMV but at the second, the inspection agent crossed herself, than processed the paper work.
'71 FJ40 since summer of '95

I would like to see some more pictures of this 62/63. How much of of the tub do you have. I assume the VIN plate is attached to a cowl. Something is up with the VIN plate. I don't thing Toyota used rivets until around 1969 when they added the door jam tag. One that early should of had screws and nuts not pop rivets.

Living in the Past said:
I would like to see some more pictures of this 62/63. How much of of the tub do you have. I assume the VIN plate is attached to a cowl. Something is up with the VIN plate. I don't thing Toyota used rivets until around 1969 when they added the door jam tag. One that early should of had screws and nuts not pop rivets.

Living in the Past said:
I would like to see some more pictures of this 62/63. How much of of the tub do you have. I assume the VIN plate is attached to a cowl. Something is up with the VIN plate. I don't thing Toyota used rivets until around 1969 when they added the door jam tag. One that early should of had screws and nuts not pop rivets.


Well John, you're going to have to buy me dinner first. Actually, I'm easy. Here's how I got her. The VIN plate was not attached as I didn't get any body parts with her. I just rivetted it to a fender I had to be a second VIN for the title transfer inspection.

JohnnyC said:
does the engine number match the engine?
Click to expand... 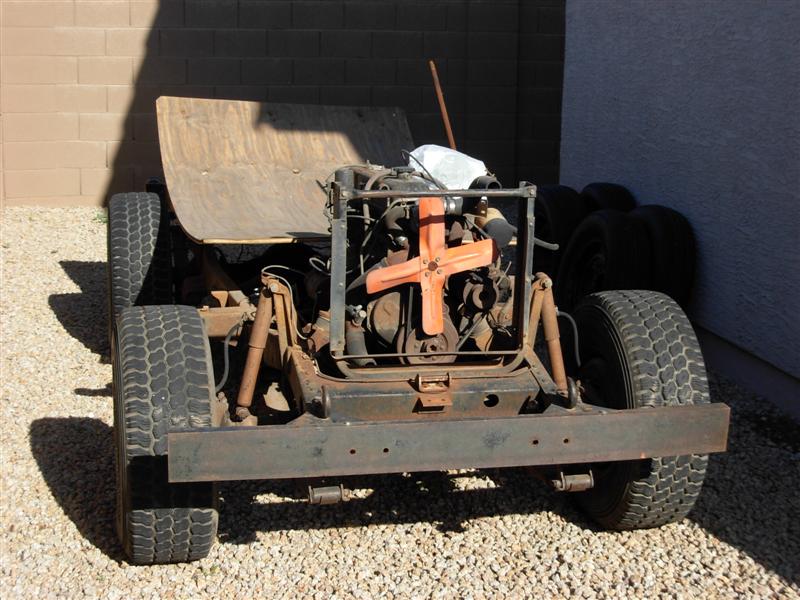 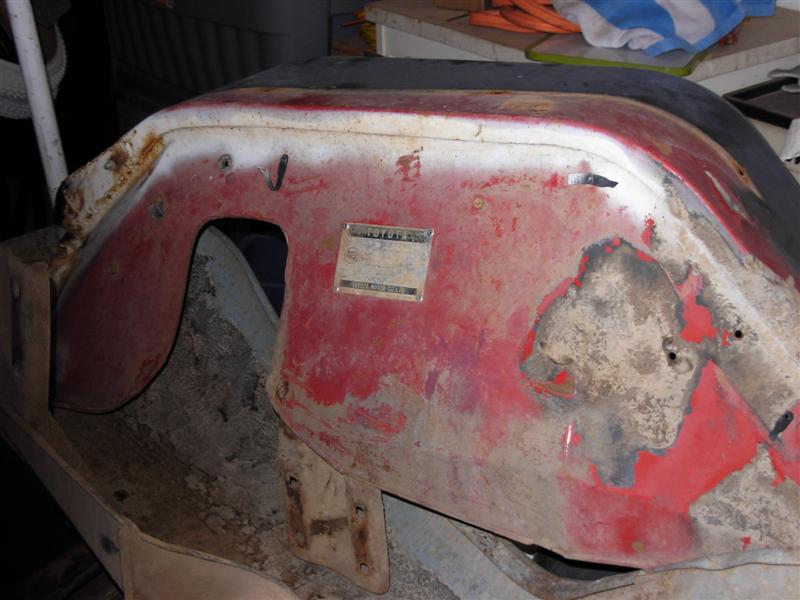 I guess you didn't have the inspecter I had. My 1965 FJ45 is listed as having the VIN in only one location on my AZ title. I tried to show him where there was one on the frame, but he's wasn't listening and marked it as only having one, this was the complete vehicle. I had checked them before I bought it in CA so I knew they matched. Probably paid more for the 45 then you did the rolling chasis and I didn't want trouble getting the title in AZ.

Yeah, I had to take it to a second DMV to get it titled and I lucked out with a new inspector. And the next time I buy something like this, I'll be a bit more careful and picky.

no worries. I find this all very interesting to hijack away!
Told ya it was inevitable....my last name is Wheeler!

I wish we had an original owner to confirm who did the stamping on the plates. It had to have been the dealer, but did the plates come completely blank? That might explain the typo between the frame and tag. One thing for sure, the years that show up are "almost always" the year it got titled. Later years got a little tag with the titled year stamped into it and attached under a screw. Don't forget that Toyota dealers at the time weren't big outfits, they could have been the local garage and held onto the inventory until it sold..................
Jim
"The FJ25 is almost humorous in its simplicity, but therein lies its beauty." Nina Padgett - Autoweek

The factory distributor did the stamping, it would have been done right at the port of entry when the distributor sold the truck to a dealer. Toyota had distributors back then, they were not the importer until later years when they formed their own distribution company in the U.S. I worked for Toyota in the Mid-Atlantic Region in Glen Burnie, MD from 1980 until 1982. It was privately owned then. In those years we sold out each model run and never carried over any of the older models. But in earlier years, the cars sat at the port until sold to a dealer, sometimes past the model year end. Cars were never changed but trucks could be changed. FJ's were treated as trucks then. And trucks were assigned a model year when they were sold, even if they sat there for a year or two. My FJ25 is a 1959 but wasn't sold to a dealer until 1961, so they put 1961 on the cowl plate even though the frame says 9. From 1972 until 1980 I worked for Chrysler Corporation. We used to build hundreds of chassis for medium trucks and buses at the Lynch Road Assembly Plant in Warren, MI. Often they sat for two years. The serials were on the vehicles but the year was not assigned until the vehicle was sold to a dealer, that way the dealer got a 'new' model truck. Regulations on cars were more stringent because they required a Monroney label on the window and they never received this treatment, only trucks. I am pretty sure this is way it worked in the late fifties and sixties in the import car and truck industry. So, I feel certain the dealer had no had no say in determining the model year, only the factory or, in the case of Toyota back then, the import distributor.
Rick
1958 FJ25
1959 FJ25
1960 FJ25 (two)
1963 FJ40
1964 FJ45 SWB
1966 FJ45 LWB

It's interesting to think that some Cruisers stayed parked for over a year waiting to be sold.

So let me ask this, when you read these charts that mark the number of cruisers sold per year, are they taling about what was imported, or what was actually sold to a dealer?
Self Admitted Purist
1964 FJ40 Hard Top...doing a true restoration!

That's great info Rick. That's the way I understood trucks to be sold, that's why all the parts books went by chassis number not model year. I wouldn't think that a dealer would be the right place to be stamping VIN's.

But then there are still mysteries like this. My three, from lowest production number: 20847 is stamped 1962. 20848 is stamped 1961, and 20849 is a different style plate and stamped 1960. This seems a little random, but maybe not, as they may have decided to ship three identical green soft tops at different times.

The motor numbers establish that Toyota was just pulling from a big inventory of motors and not putting them in any type order. 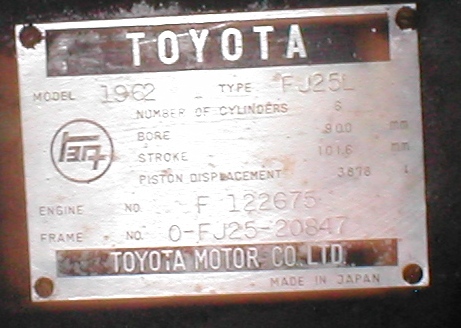 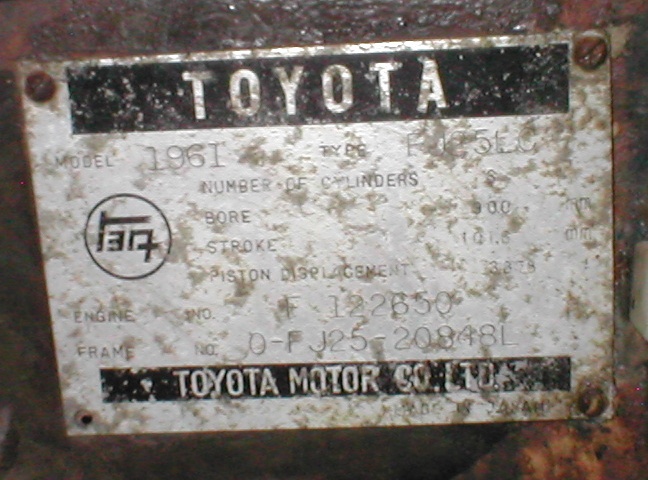 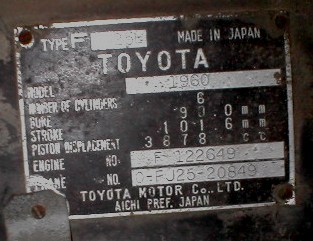 Jim
"The FJ25 is almost humorous in its simplicity, but therein lies its beauty." Nina Padgett - Autoweek

Besides the plates, were the rest of these three cruisers the exact same?
Self Admitted Purist
1964 FJ40 Hard Top...doing a true restoration!