Introduction and some fun in the garage (1 Viewer)

I have been having some fun in the garage and wanted to share some of my first projects on my 2016 Land Cruiser. I’ve been taking it slow but last month had the opportunity and pleasure to spend a week in the Canyonlands with my family and some friends. The truck did great but of course now I have a slightly longer list of todo’s

I welcome your comments especially corrections and improvements to what I have done. I tried to include as much detail as possible to possibly help someone in the future.

I like the look of the Rock Warriors and have always been a fan of the BFG KO/KO2 tires. As with many others I sized the tires to 285/70r17 and with stock lift there is no rubbing. The Rock Warriors wheels were OEM on the 2009-2013 Tundra Rock Warrior package, and I actually did find a set of new wheels at a nearby Toyota dealership but priced as such- about $400/wheel. I waited a bit and was fortunate to find a set of 4 wheels locally that were in nice condition for about half the price of a new wheel.

Toyota did change the part number of these wheels. The earlier wheel was part number PTR45-34070. The newer model is PTR45-34120. From what I can tell the only difference is that a small groove has been cut into the trim ring that adorns the wheel possibly to aide in drainage. 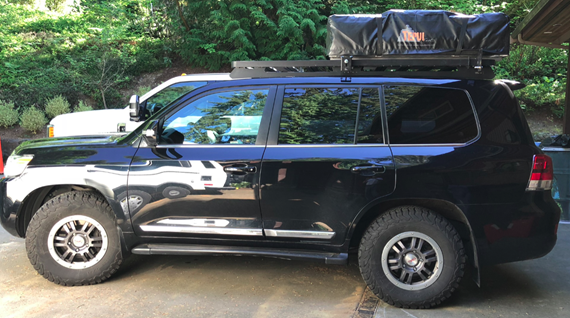 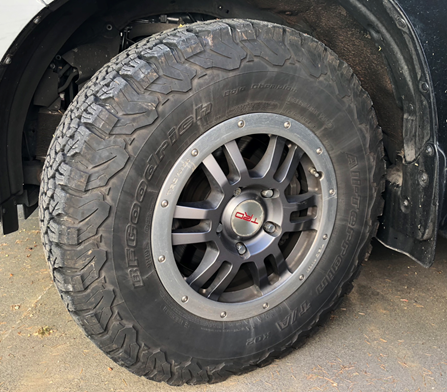 The wheels are a direct fit except the stock Land Cruiser lug nuts will not fit these Rock Warrior wheels and require the Toyota install kit part number PTR27-60110 which I found from Toyota Parts dealers online for around $150. 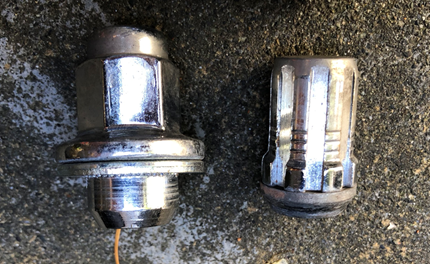 A picture is worth a 1000 words- the stock lug nuts don't fit the rock warrior wheels. 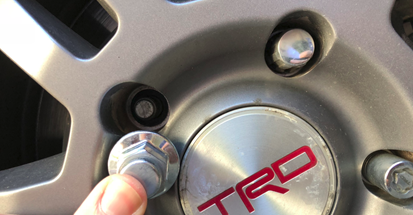 The TRD branded kit includes new lug nuts all around plus a security lug nut for each wheel and custom keyed socket. (I have heard that some people have had this strip out so I remain cautious to not over torque them beyond the 97 ft-lb for the Toyota aluminum wheels). 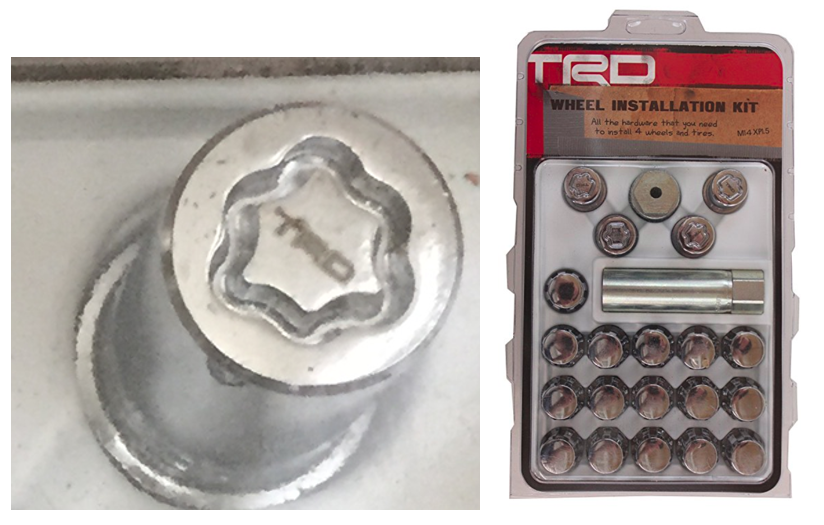 Discount Tire mounted and balanced the wheels and were great to work with. In the past on some different trucks I seasonally swapped out winter tires. While I probably wouldn’t do that with these, old habits die hard and I decided to keep my original Land Cruiser wheels intact with the GranTrek tires and OEM TPMS sensors.

I purchased a new set of standard TPMS sensors from Discount but they could not get them to pair with the Land Cruiser computer. The programming tools that Discount had were not working on the 2016 Land Cruiser and they called Toyota who said that only their (more expensive) TPMS sensors would work. We swapped in the Toyota TPMS sensors but had the same problem with pairing the sensors with the computer.

Discount suggested we take it to the dealership who then spent a few hours working on it before solving the problem. It’s still a bit confusing to me, but it seems the 2016 Land Cruiser can only store 5 tires in its TPMS memory and the new wheels would need to be (re)registered with the TPMS computer system anytime a new set was used. And at the time the Discount TPMS tools were not able to do this on this model year Land Cruiser. I was surprised that it was this challenging and I would have hoped the dealership would have been able to solve it much faster than they did. In the end though both the dealership and Discount chalked it up to learning and did not charge us the extra time- that was really cool of them.

However, I am still not quite sure the exact process for resetting or registering new tires in the TPMS system in the future, although to be fair, I haven’t searched if there is a how to out there for this model year.

I dig the look and have been really happy this first upgrade. Looking forward to sharing more with everyone.

I run winter tires/wheels. I swap them out myself in the garage then have to go by my local tire shop where they wave the wand to re-set my TPMS (I buy all my tires from them and they don’t charge me, great service!). There are clone-able sensors that guys on here have that use the same ID with both sets. I will be going that way next time I need new tires.

you can write the TPMS codes into the memory using Techstream, the fact that the dealership couldn't do this in 10 min is quite troubling. I bought a TPMS programmer and am doing as ColeAK suggested, cloning 3 sensors with one unique in each 4, and running 4 + 4, with the unique wheels as the spare.
The generic sensors paid for the TPMS programmer in one set, and I can now maintain the TPMS sensors in my other cars as well. TPMS is such a headache.

Got a link to your programmer?

Yes- I was really surprised that neither the tire store nor the dealership could solve this problem right away- but maybe they aren't changing too many wheels on late model land cruisers so is new to them. Evidently the TPMS system in the 2016 Land Cruisers departed from how the older ones worked and you needed to reprogram the computer via ODB2. I have one of the less expensive Autel TMPS tools which worked great for my old trucks but would not solve this problem- it didn't have an odbii interface. I do like your guys idea of the cloneable sensors and they don't look that expensive- about $30 ea- and less than OEM.

But I wonder why the land cruiser can't keep in its memory 2 sets of wheels like many others can- I feel like i'm missing something or don't quite understand how this system works and why it changed from many others.

I got a basic Autel, I think it is the 408. It was the cheapest that day. It can program Autel sensors, and read any sensor thru the tire.
Initially I thought I could use Techstream to enter in Tundra 8 char sensor codes, as I had four Tundra sensors that came on the 18” used Tundra rims I got, nope, TLC/LX use 7 char codes. I got the TPMS programmer to read the sensor Ids without dismounting the wheels so I could then put into Techstream.
But since I had it then went ahead and started using it to program etc. I also broke some oem sensors while remounting tires and so it has really paid off as I am doing 6 sensors instead of the planned 3.

I don’t know about 2016 plus and obd2 but that would be a big change, as far as I know Techstream is the way a dealership would manage sensor list. In Techstream you can see the memory location for the 2nd five tpms, but the switching isn’t available. I conjecture that this is enabled in non US models, or possibly is legacy from earlier models. It isn’t functional on my 2009 LX.

As with many others I sized the tires to 185/70r17 and with stock lift there is no rubbing.
Click to expand...


Boy, your pizza cutters are narrower than what I have on my Lotus

ryanCA said:
Boy, your pizza cutters are narrower than what I have on my Lotus
Click to expand...


Whoops, typos! - i need to correct that- 285/70r17. But reminds me, I do chuckle about that when my Syncro is sitting next to the LC. It is sitting on pizza cutters! 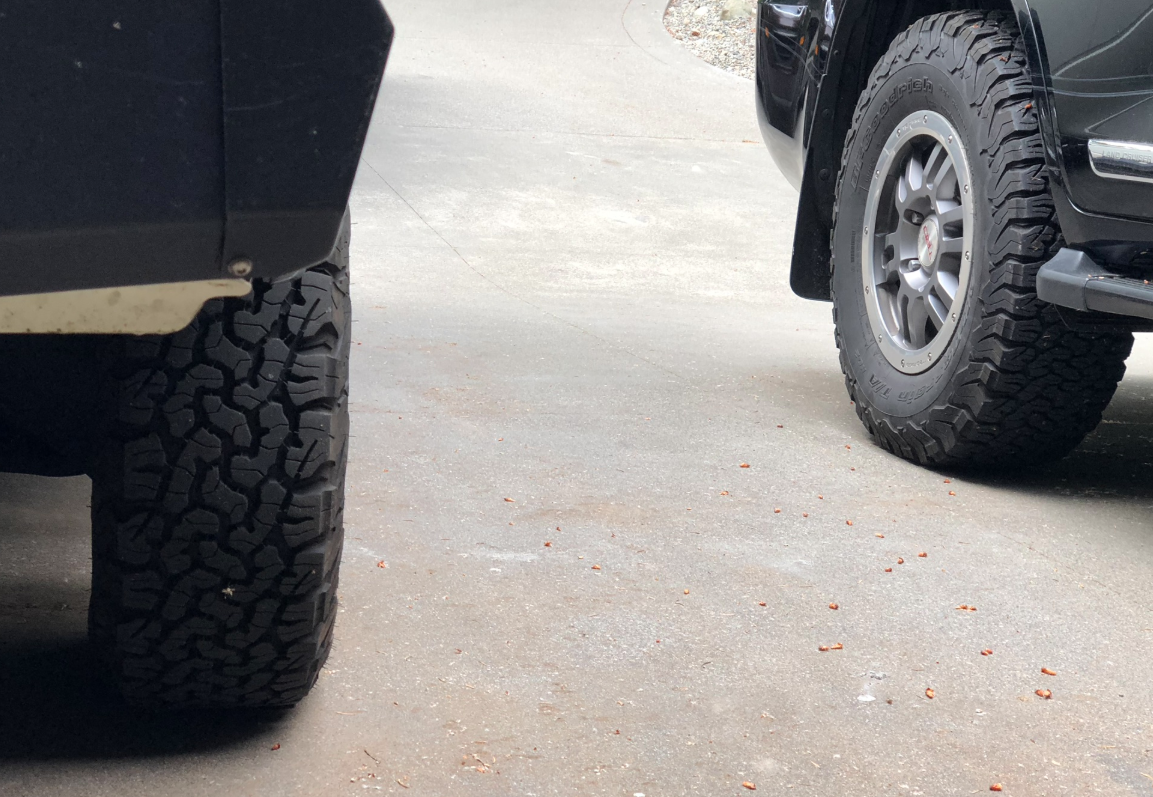 grinchy said:
I don’t know about 2016 plus and obd2 but that would be a big change, as far as I know Techstream is the way a dealership would manage sensor list. In Techstream you can see the memory location for the 2nd five tpms, but the switching isn’t available. I conjecture that this is enabled in non US models, or possibly is legacy from earlier models. It isn’t functional on my 2009 LX.
Click to expand...


Yes, that was what surprised the tire store and the dealer- they were used to the earlier model land cruisers but the 2016 evidently changed how the TPMS registration is handled. If it learn more how it works I'll share- it was a larger pain than I would have expected. And if i swap back to the stock wheels/tires I would rather just do it myself.
You must log in or register to reply here.

TPMS on trailer wheels... will car recognize them?

H
Can Rock warrior wheels fit on 2016+ LX 570 without any modification?