Hello, my name is Tony and I’m a Toyota addict. On my fourth Toyota, built out a 2006 Tundra and a 2015 Tundra (current daily driver).

For as long as I’ve been with my wife (16 years) she has wanted an older “jeep like” vehicle for the occasional driver/weekend trips to wine country. I had looked for Series II/III Land Rovers for awhile but have also been looking for a FJ40.

On my way to Montana for my annual spring bear hunting trip I located a 1971 FJ40 sitting on the side of the road in Salmon Idaho. Here’s what she looked like when I first saw her: 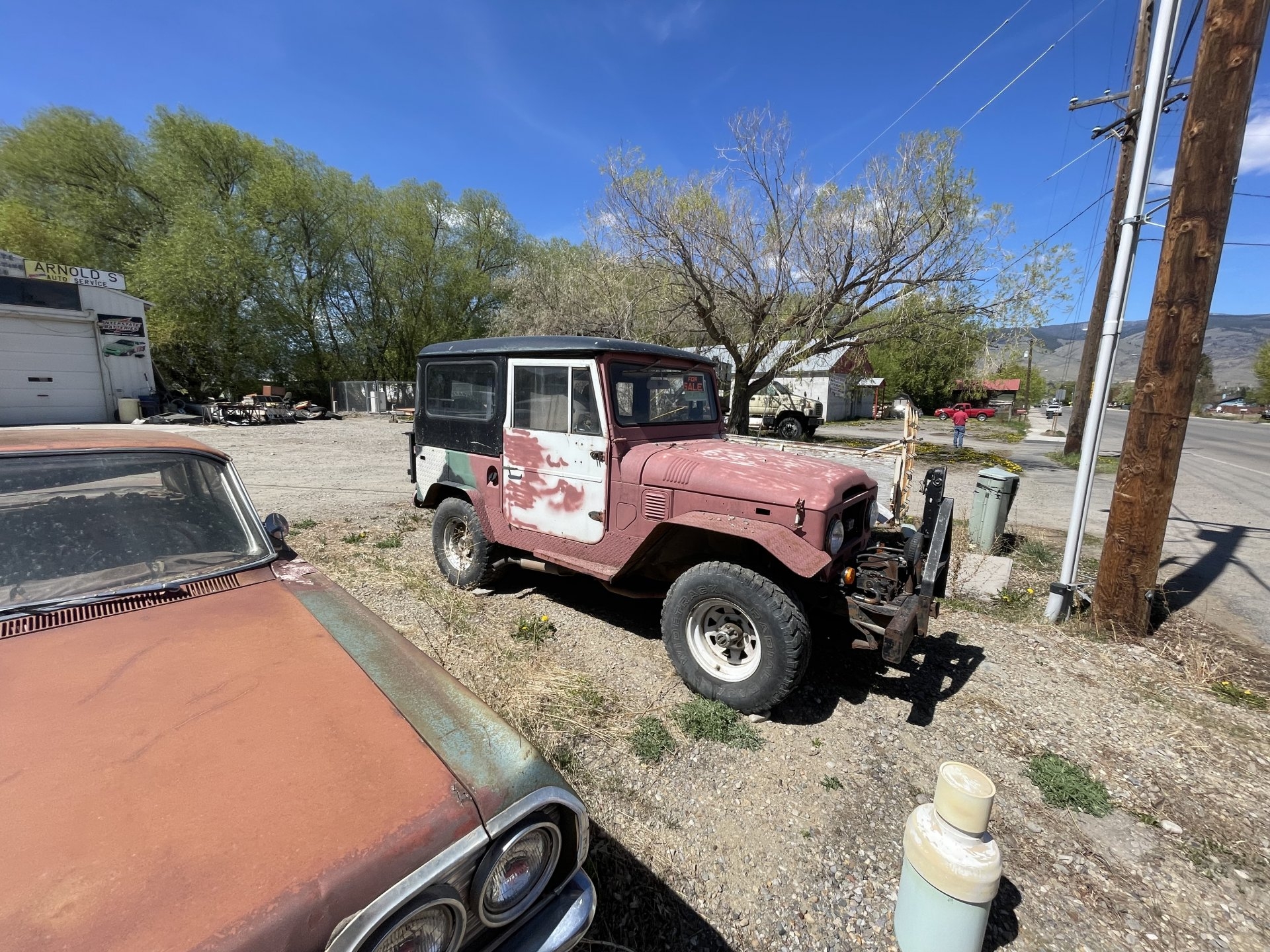 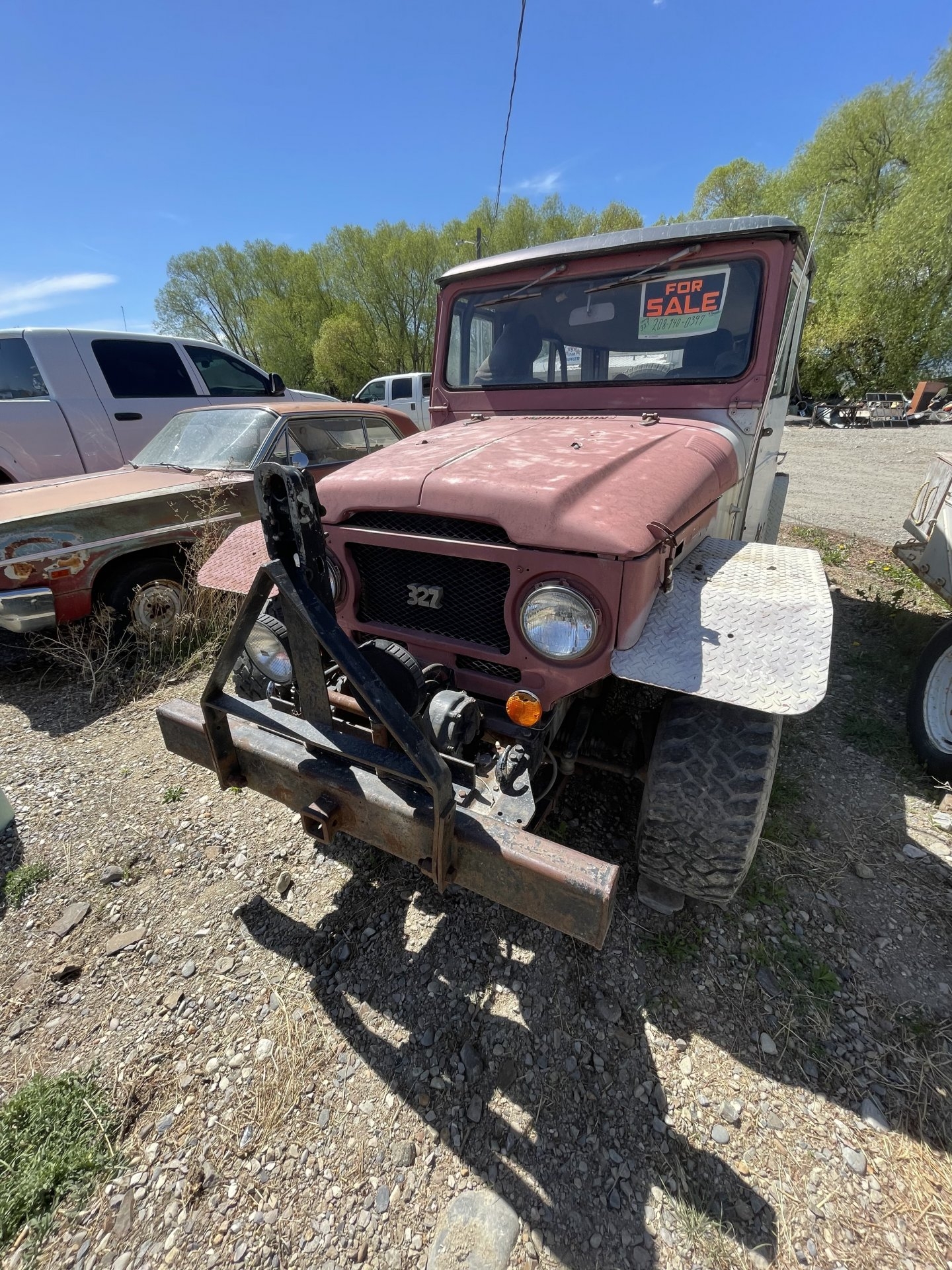 After speaking with the PO I learnt that it was a 1971 with a Chevy 327 under the hood and that it ran. We agreed upon a price (almost too good to be true actually) and made arrangements to meet in a few days. Met up with the PO and we immediately struggled to get it to turn over. Turns out, truth be told, it had been sitting there exposed to the elements for 4+ years without anything being done to it. No regular maintenance, no regular startups, no battery tender etc. PO hooked up two "relatively new" batteries to her and she wouldn't turn over at all. At this point I'm thinking well the price just went down again significantly. I recognized that there was an O'Reilly's right up the Highway so I headed off there to pick up a new battery and some starter fluid.

Once the new battery was installed and after hitting the carburetor with some starter fluid she turned right over.


I paid the PO and then flat towed her up and over Lost Trail Pass and back into Montana. 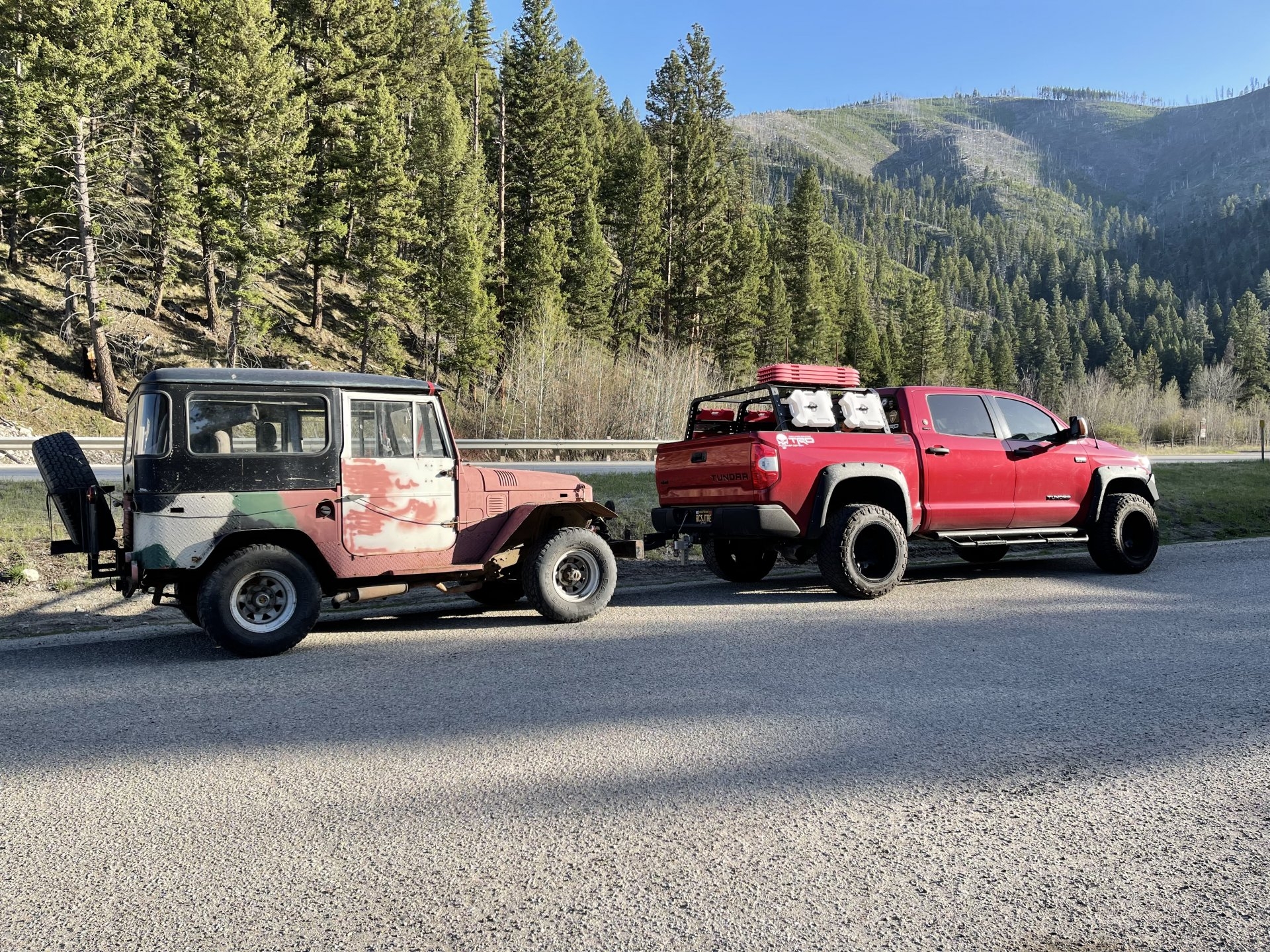 After a week of unsuccessful bear hunting it Montana it was time to flat tow her back to California. Took a hard look at the tires manufacturing date and realized they were about 9 years old. Wasn't terribly comfortable flat towing it 1,100 miles with those tires so dragged it down to Les Schwab for some new shoes. 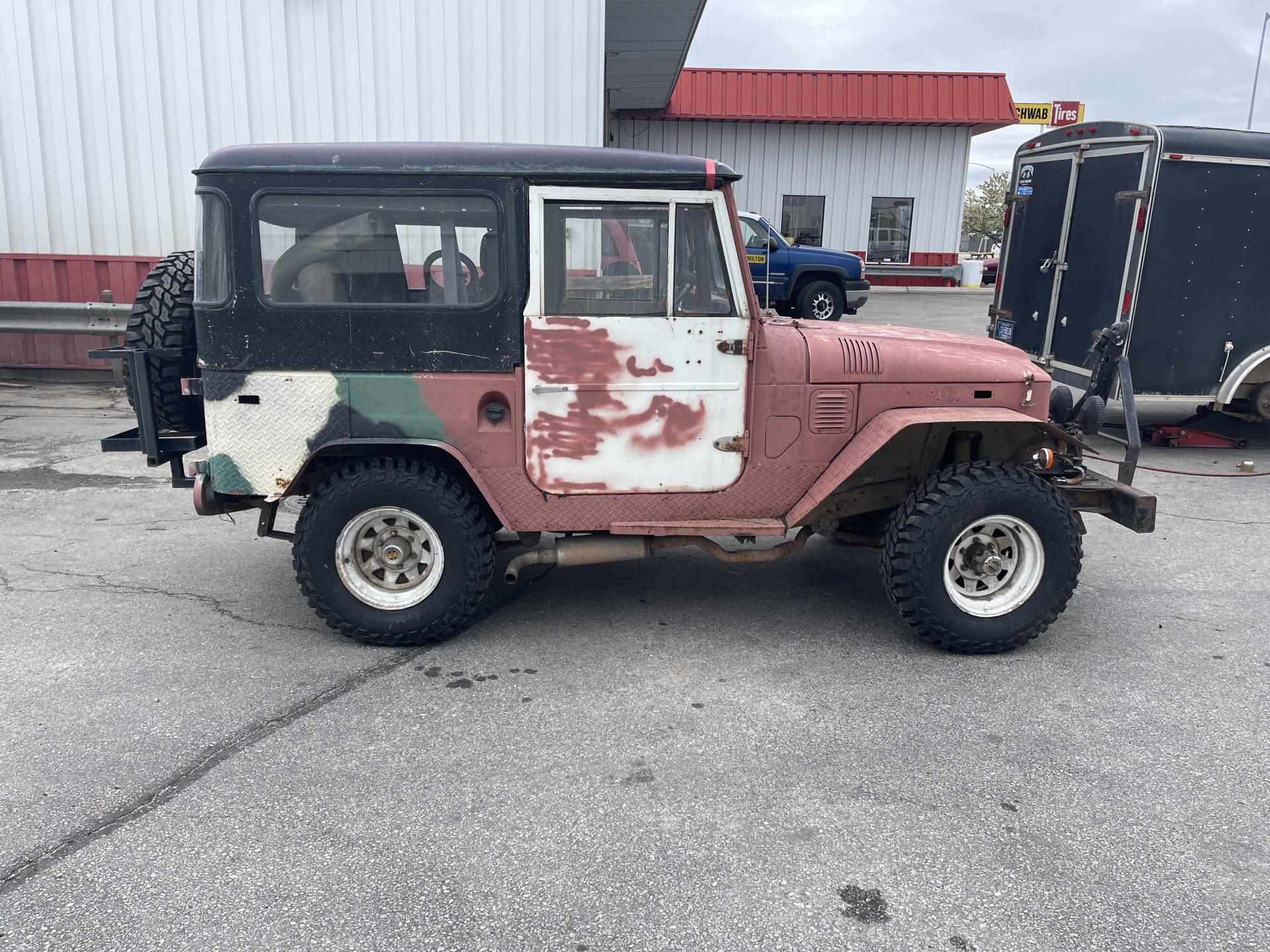 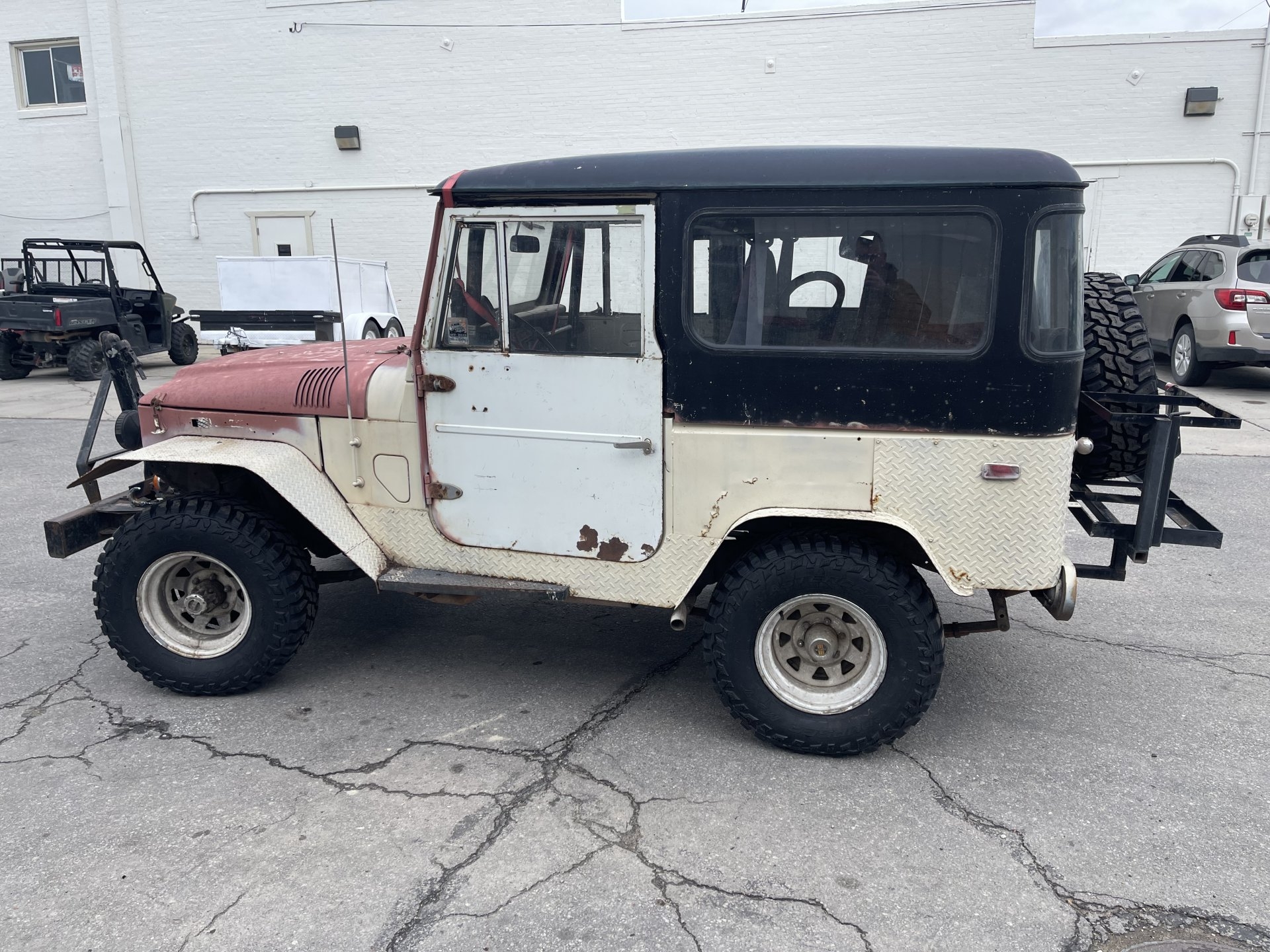 Stayed with the original tire size (31x10.5x15) for now. A day and a 1/2 later or so and she was back in California where she will get some real work done to her. 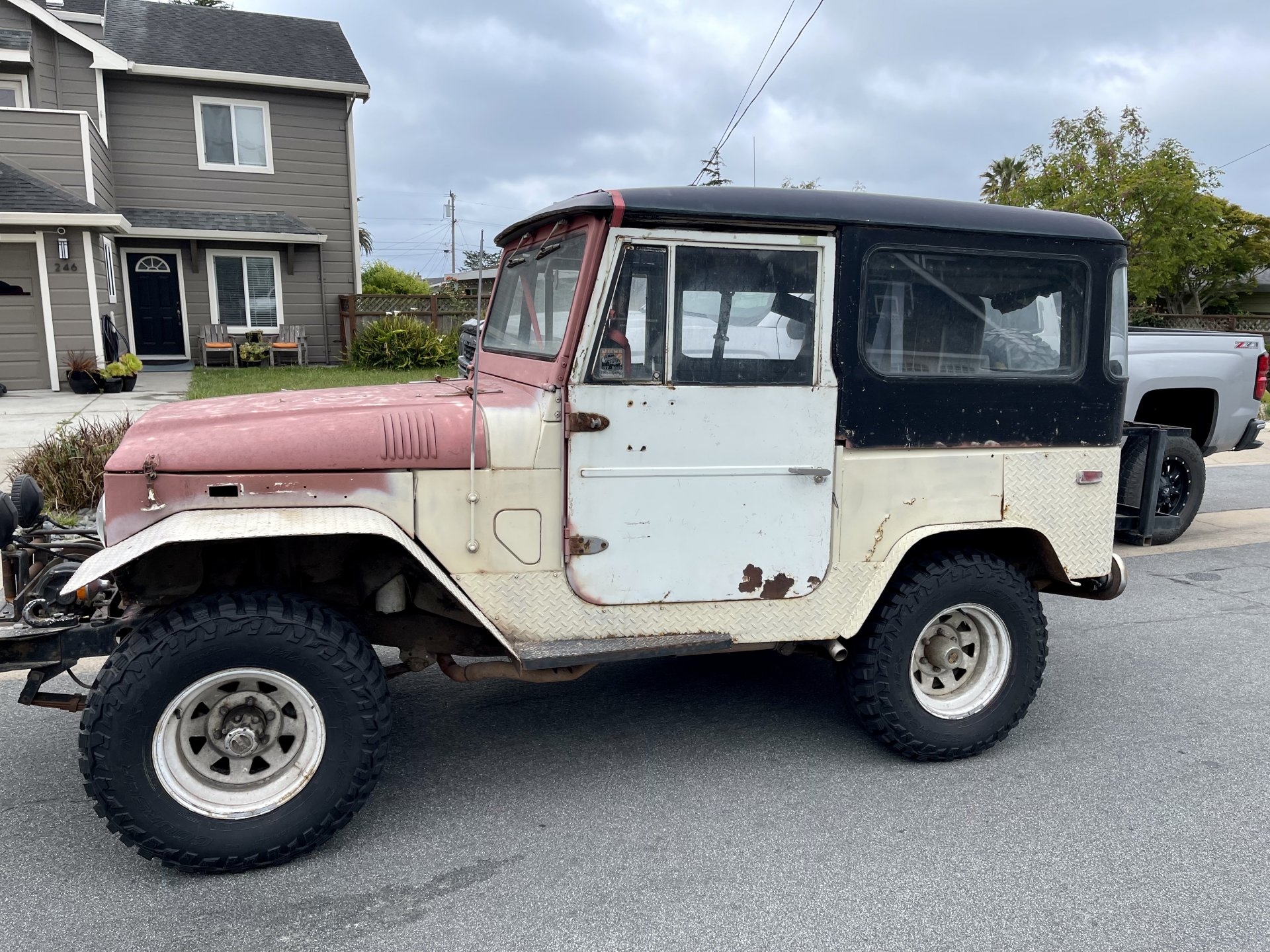 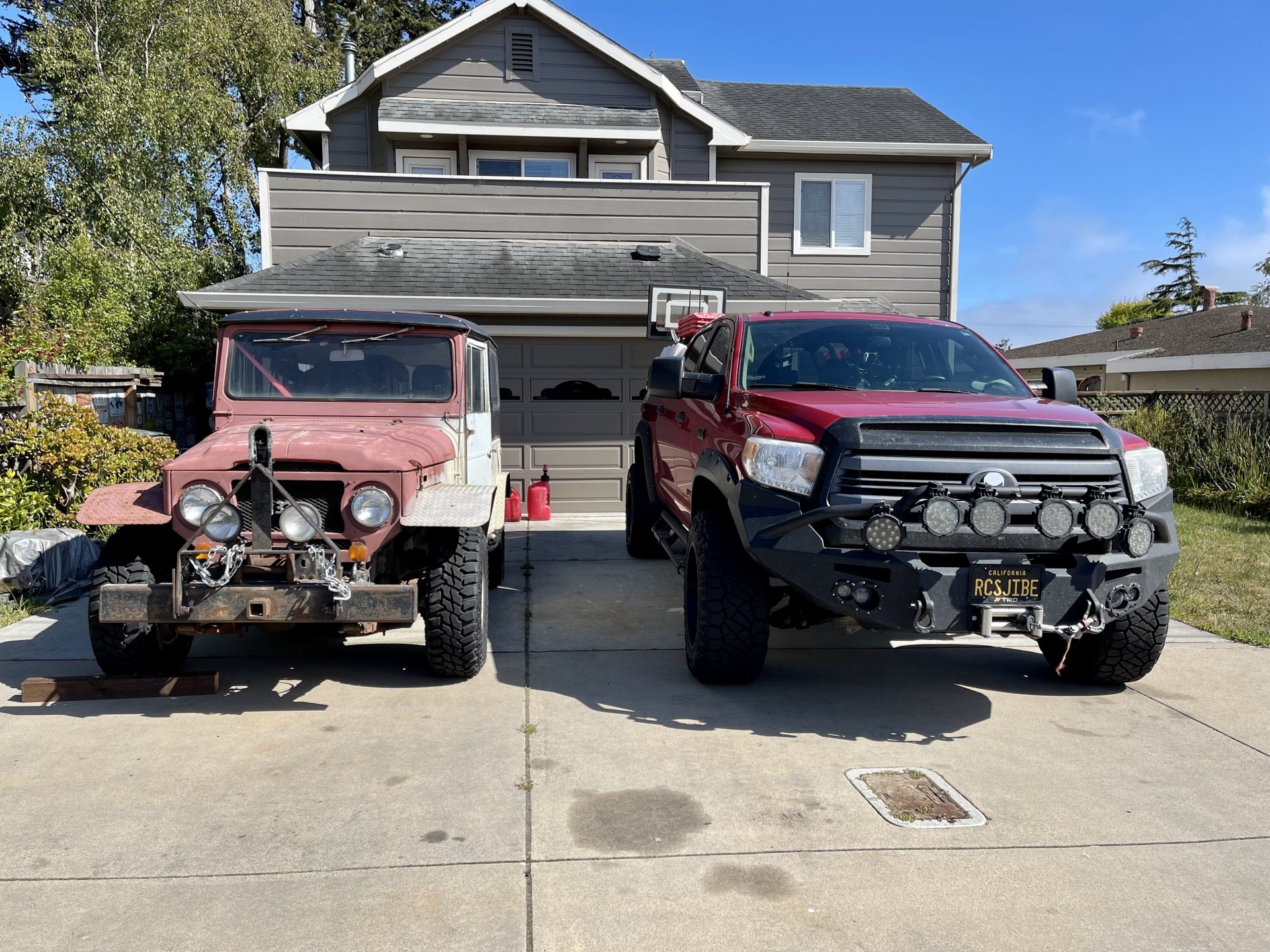 What I've learned so far about the truck:

Title says 71 FJ40. According to the frame numbers/id plate it was manufactured in July of 71 - FJ40107483
Next few posts will consist of some additional findings as well as next steps. I will state that I don't believe that it will be going back to factory/OEM settings as I'm relatively familiar and comfortable with SBC engines. I'll be doing this restoration with friends and my 8 year old son which hopefully will teach him a thing or two. 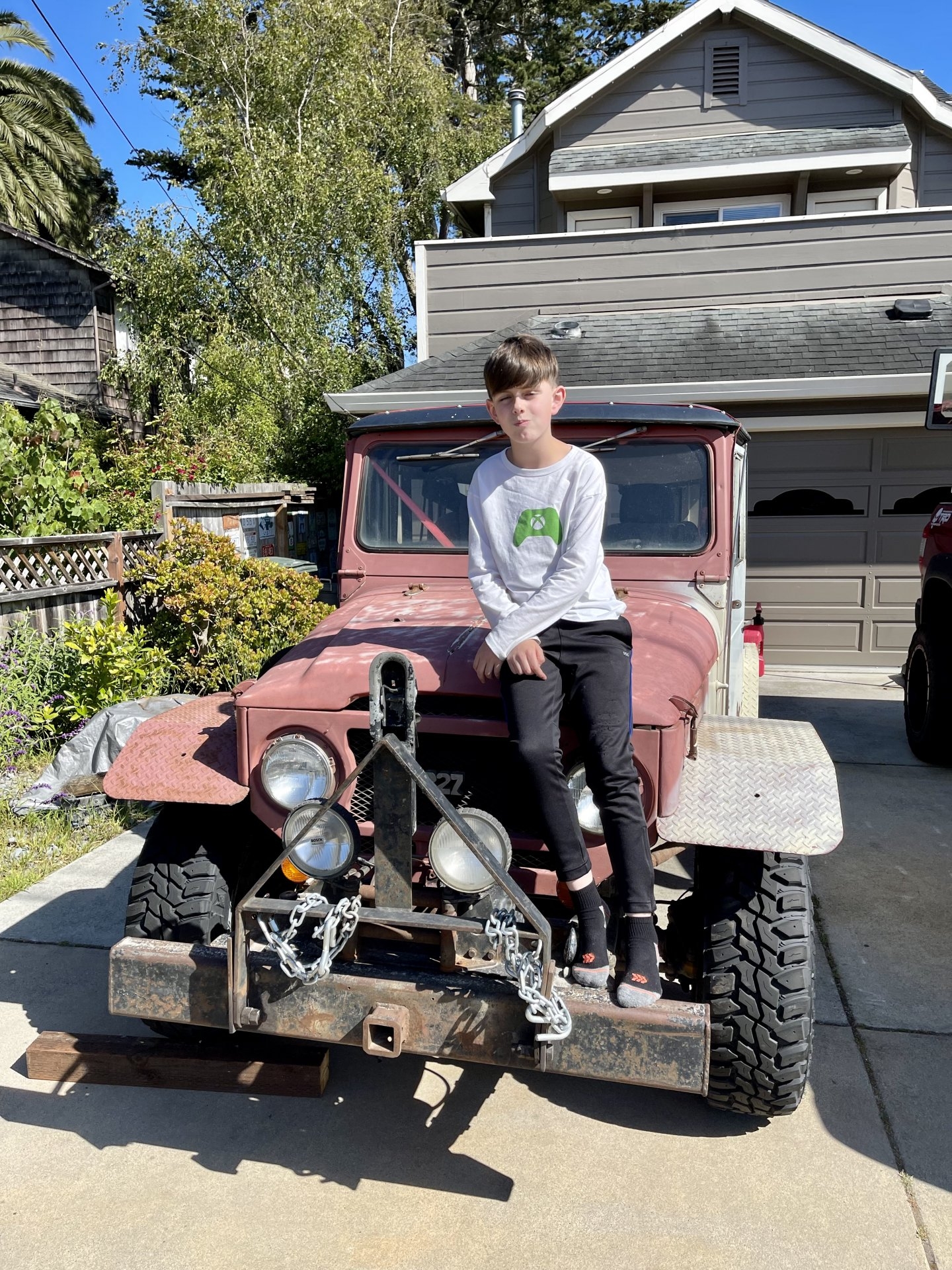 Anyways, looking forward to this trip and learning everything I can.

Visit site
i’ve been working on my projects with my sons and it’s absolutely the best part of the project. good dad time and they learn something valuable. good so see you guys going at this. keep posting!! 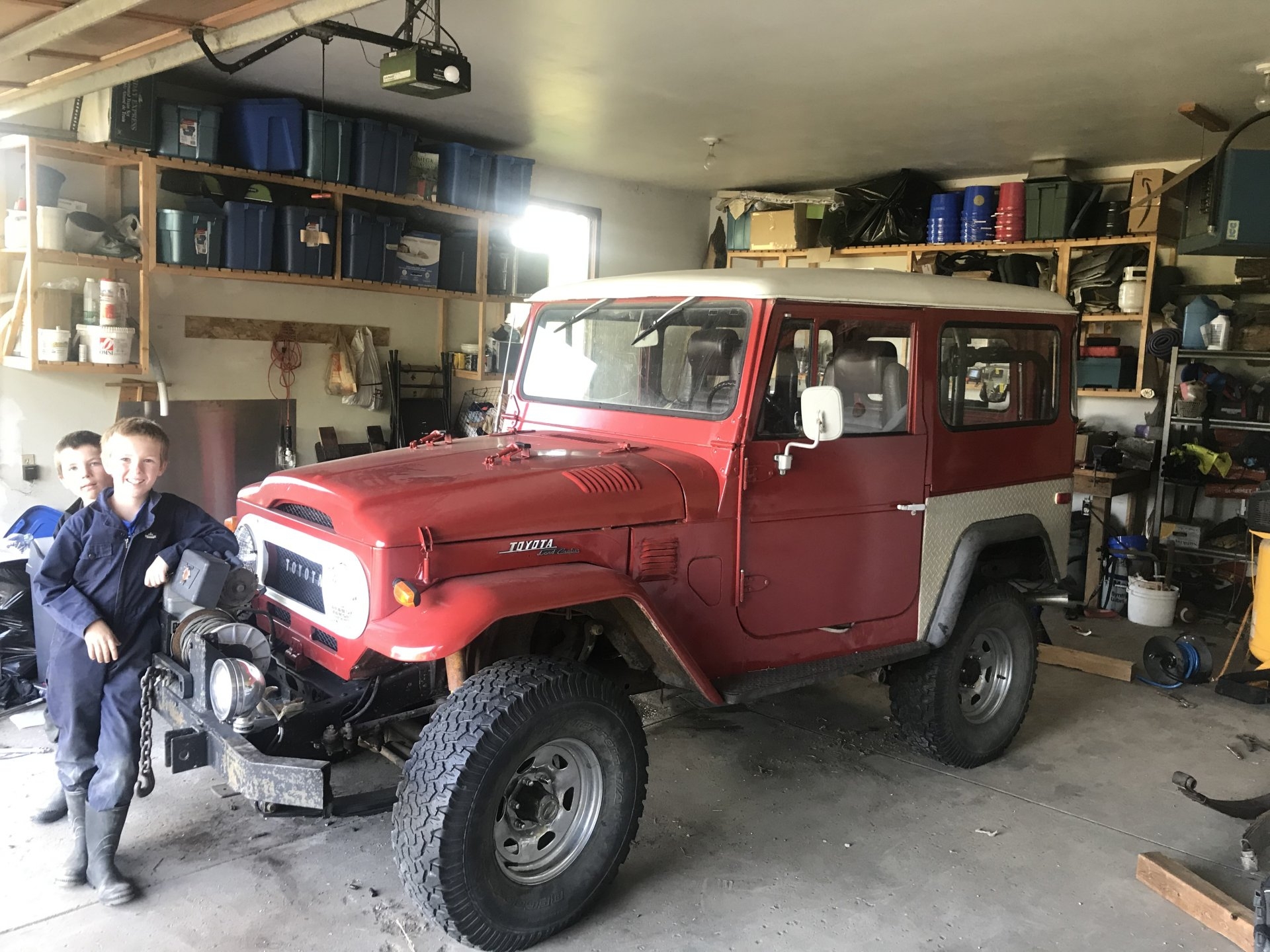 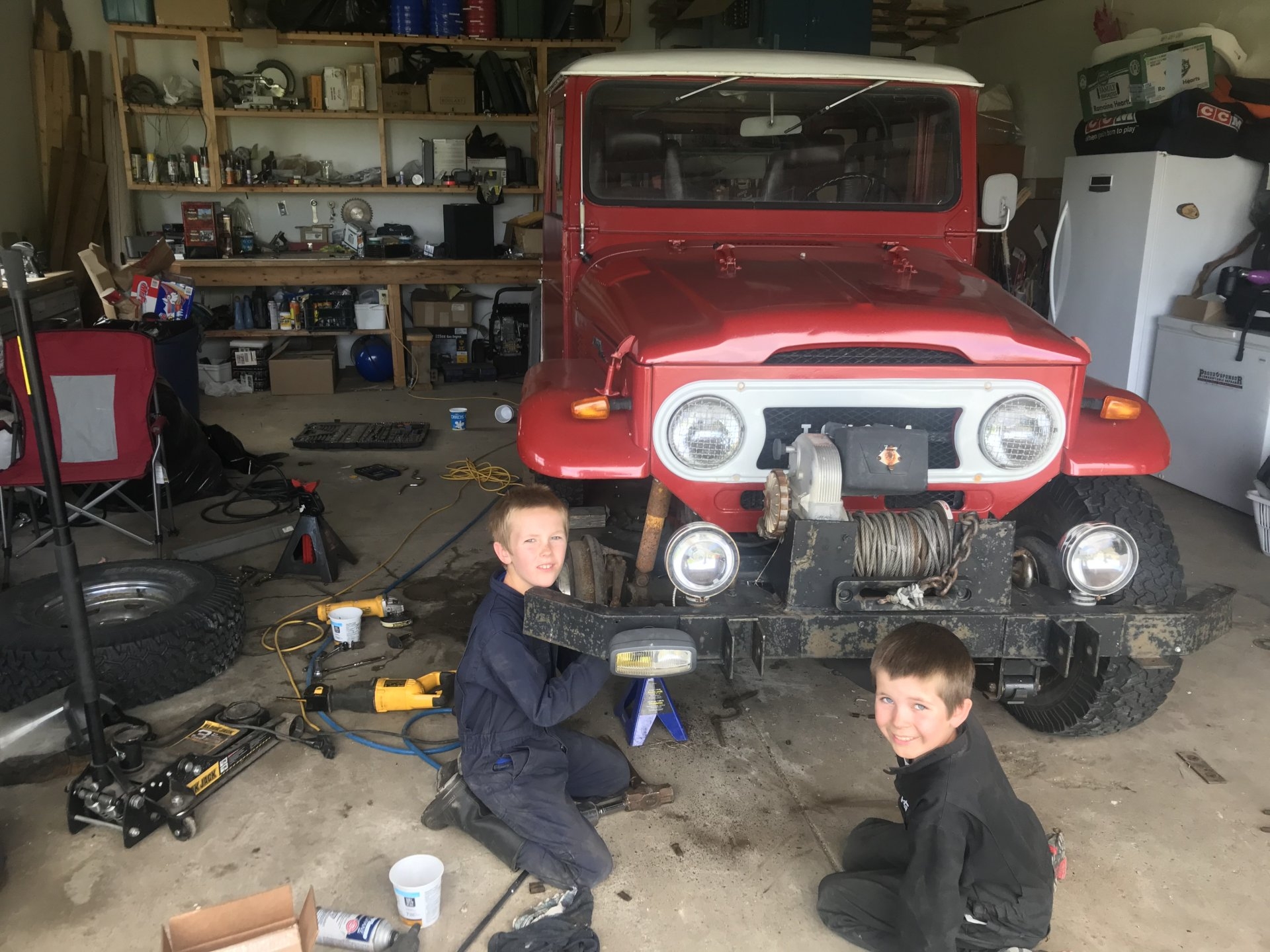 Visit site
One of my favorite threads...

A journey with my boys- The Elf Barn as I call it.

Been on Mud for a while. Have the addiction. Done a few projects in my driveway and on my back. Have a few Cruisers. My boys are at an age that is right to get them confident in many things in life thru wrenching. My dad taught me so much. Watching and doing alongside. Not to fear much. Dive...

My daughter used to help me work on my vehicles. Now I'm hoping to work on them with my grandson.

So some additional details after having her home for a few days. The stock fuel tank had been removed and was sitting in the back of the FJ. It needs some work but in the interim I installed a 3 gallon Attwood Marine Fuel Tank. 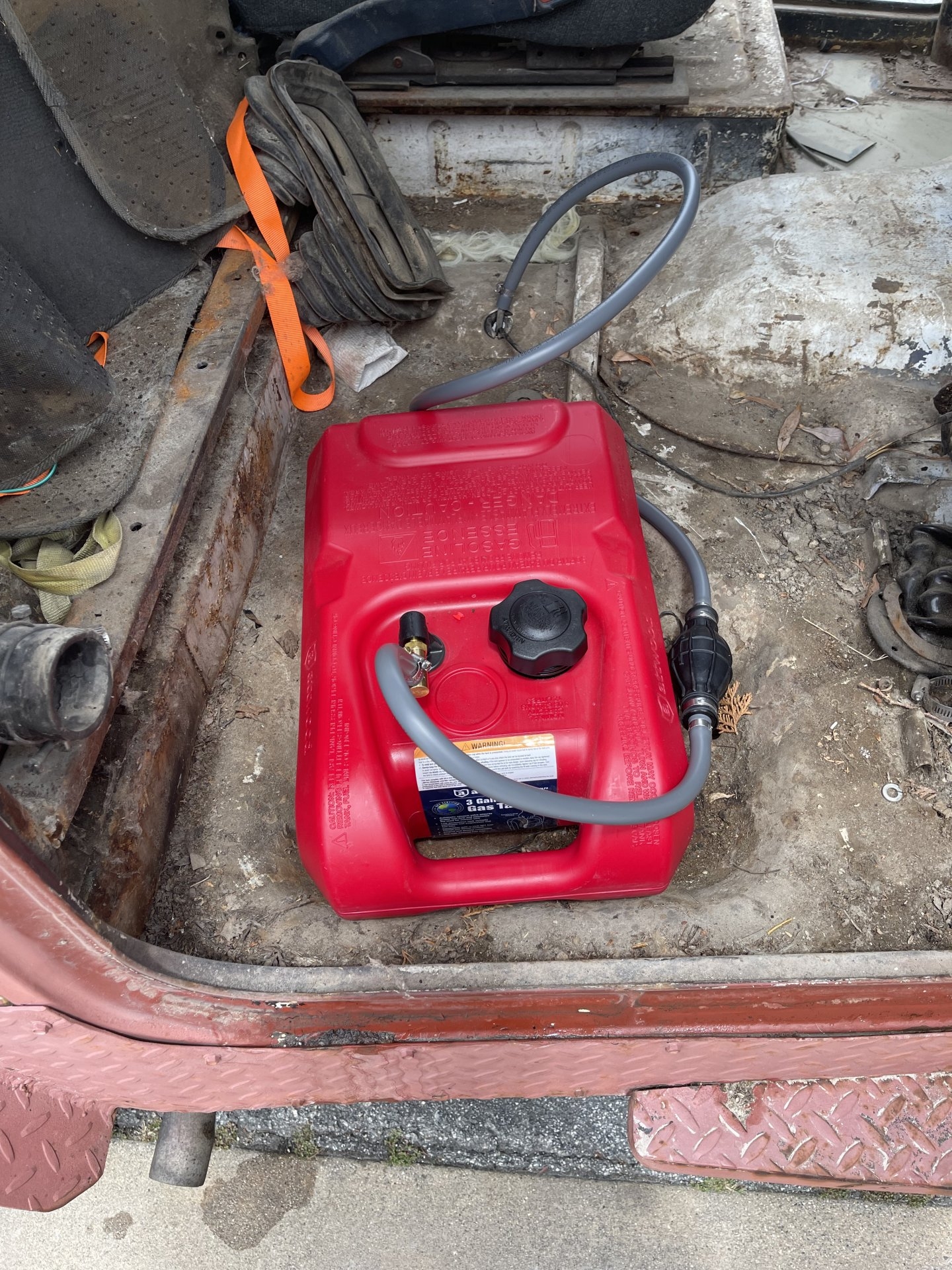 This allows me to work on the motor before dealing with the OEM tank. Once I got the temporary solution installed she wouldn't turn over. Just a clunk. Actually that's not completely true, it would start about 10% of the time and I noticed that the starter solenoid was hot enough to cook food off of. Assuming it was a starter issue I went ahead and ordered a new Prostarter Starter (SBC) from Jegs.

In the meantime I decided to spend a little time working on removing some of the grease and grim from the motor. 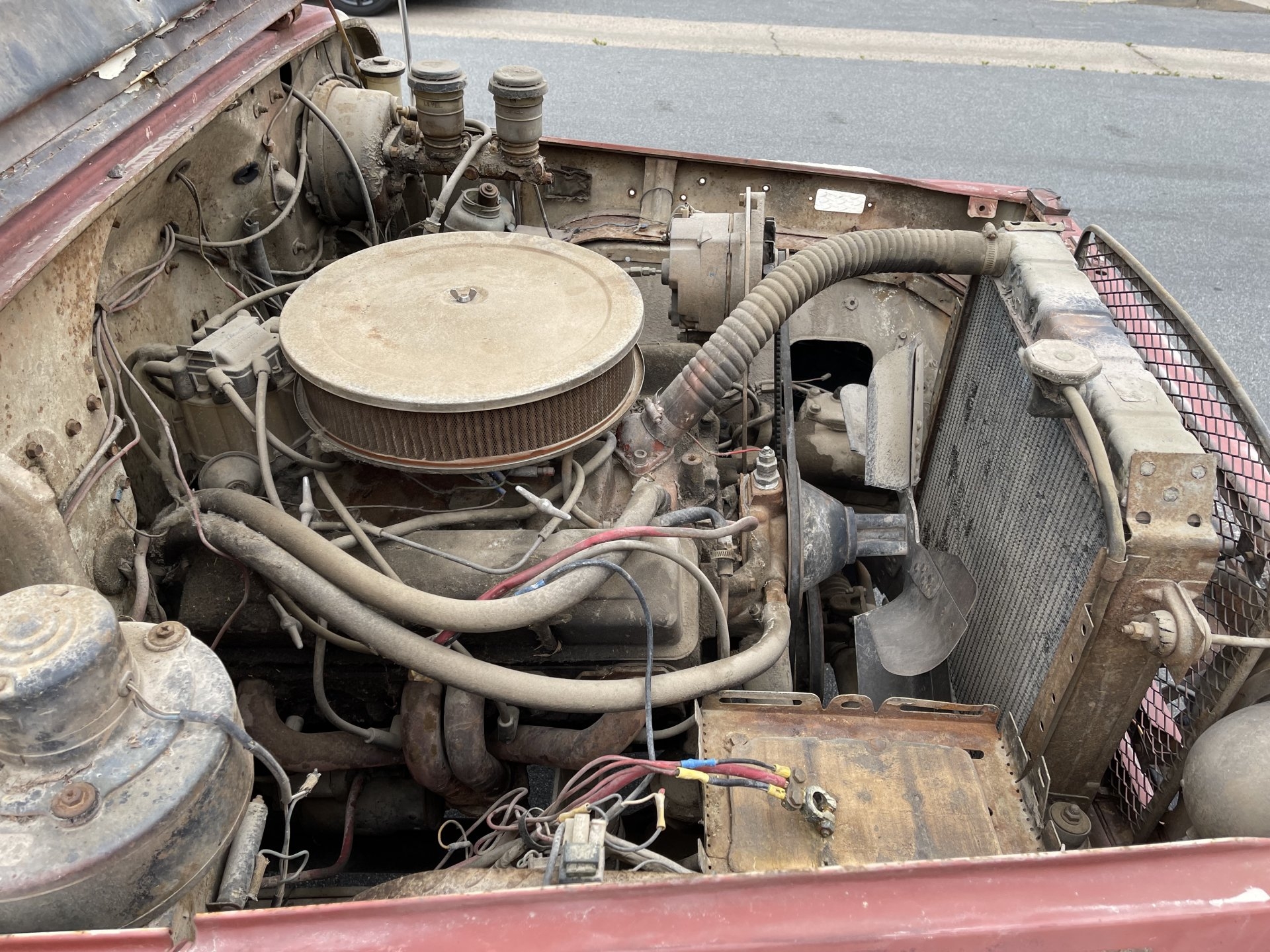 After a few rounds of degreaser and a pressure washer (as well as an air cleaner replacement) I was able to determine that there was some chrome there. 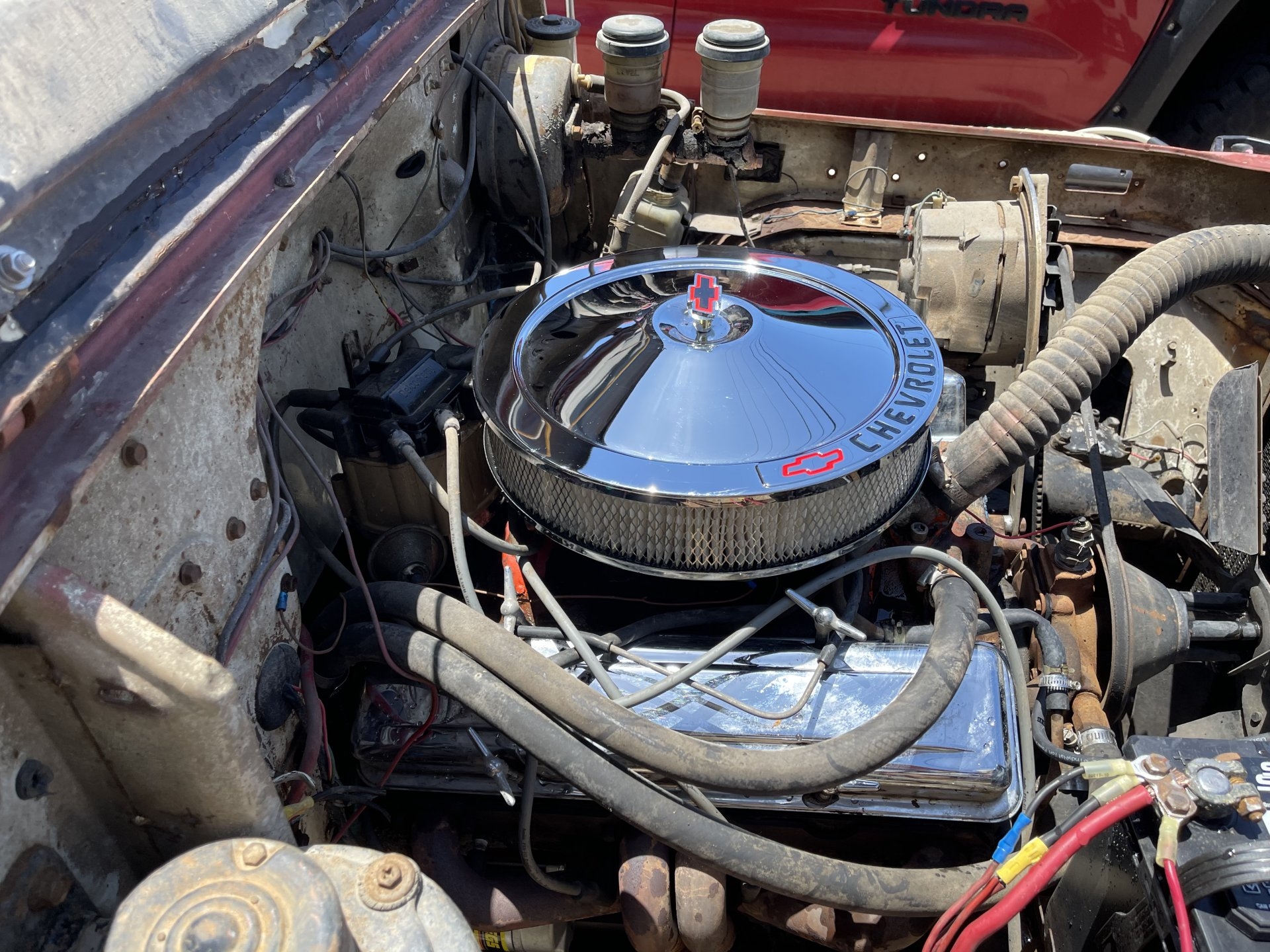 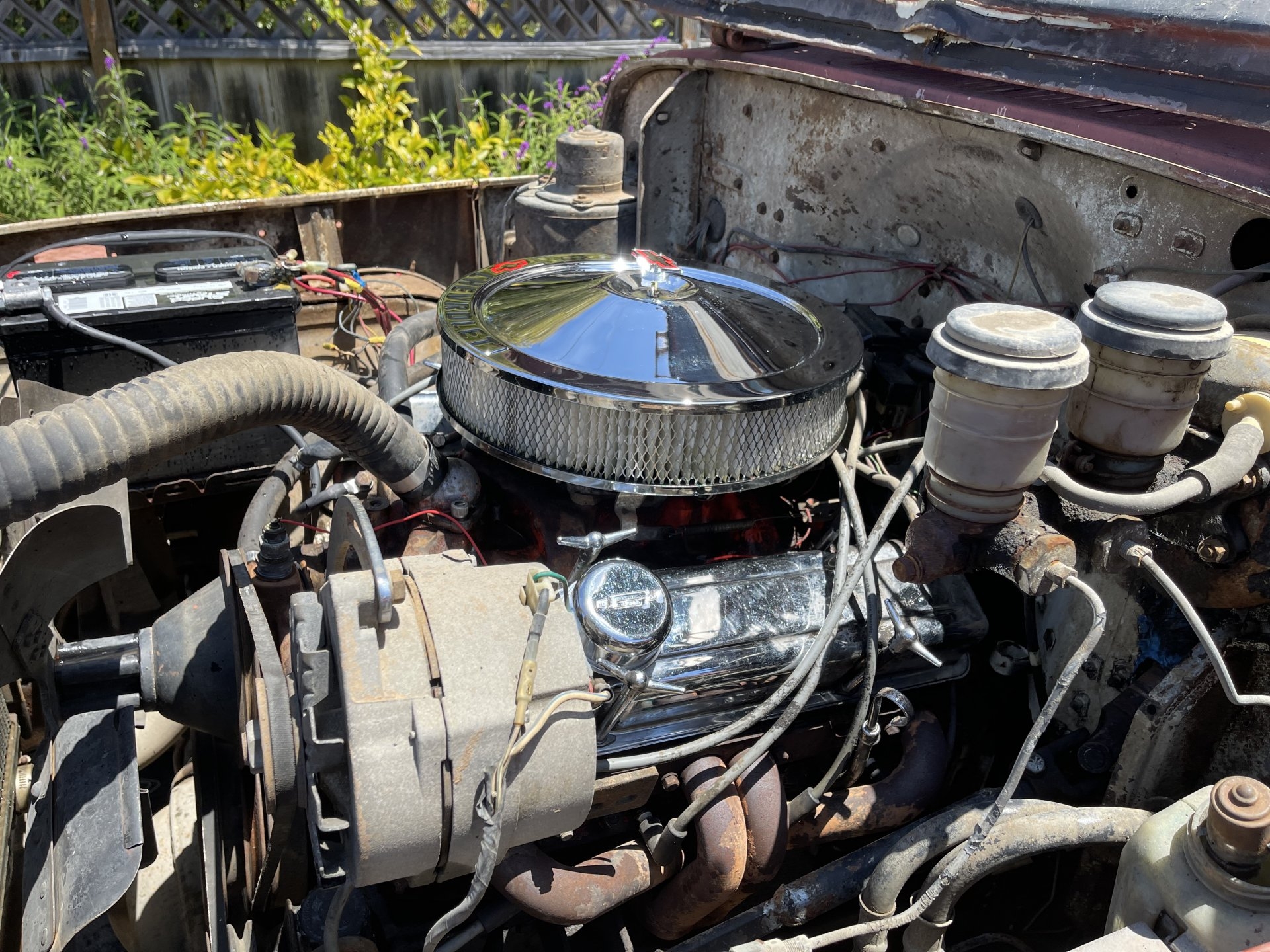 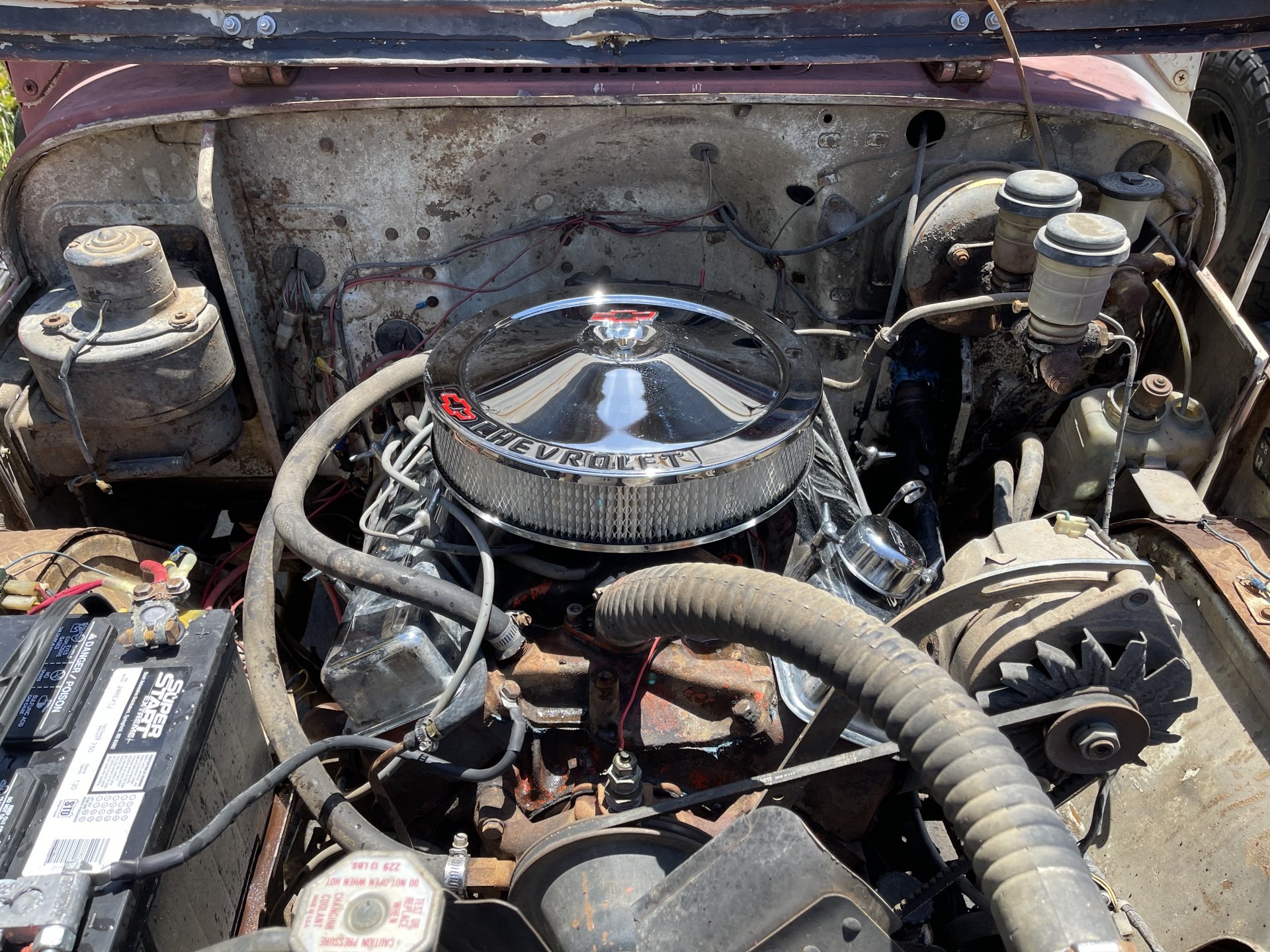 It's by no means super clean (that will have to wait until I pull the motor) but it's clean enough to perform basic operations without having to worry about wearing a full body condom.
Last edited: Jun 11, 2021

Visit site
Welcome to the madness! That looks like a very solid 40 to start with.

Visit site
So that's the one my kids saw at Les Schwab.

rkymtnflyfisher said:
So that's the one my kids saw at Les Schwab.
Click to expand...

The one in Hamilton on 93? Guilty as charged.

fusion94 said:
The one in Hamilton on 93? Guilty as charged.
Click to expand...

Visit site
How was the bear hunting?

rkymtnflyfisher said:
How was the bear hunting?
Click to expand...

Uneventful, the trip highlight was locating the FJ in Salmon.

Visit site
Congrats on your new to you 40

Visit site
Ok, time for some input from one of the elder statesmen around this farm: First, it's normal to move the radiator rearward and downward on Chevota conversions because you put in a much shorter engine and the radiator is too far away from the fan blade, and you are stuck using a smaller diameter fan blade since a larger fan would cut through the path of the lower radiator hose. Your previous owner merely used a fan spacer, but you are still stuck with using a smaller diameter fan blade. What seems to work the best is a large 18" diameter, 7 blade, air conditioning fan blade on a fan clutch- - -these suckers create a hurricane inside the engine compartment to blow the heat out!!!! Secondly, your alternator is mounted out beside the cylinder head since you are using the "short" water pump. That means it "wobbles" more radically when the engine is running. If you keep this arrangement you need to "double" the top belt tightening bracket (weld two together) otherwise the single bracket will always crack in half right at the tightening bolt on the alternator. Remedy; install the "long" water pump with alternator mounted in front of the cylinder head, no wobble, but would require all new matching pulleys (set) for the longer pump.

@Downey I've already assembled a wishlist from Jegs to deal with the radiator:
Will have to sort through the mounting once everything is here. I plan to pull the motor once I've put the boat motor back together and have my engine stand back.

Good to know about the alternator, will take a look at that as well in the future.

Michael B said:
Welcome to the madness! That looks like a very solid 40 to start with.
Click to expand...

Hey I know Huntsville as my mother grew up in Decatur and once upon a very very very long time ago I was a Police Officer in Decatur.

Visit site
Cool! I’m actually a transplant. I have only lived here 25 years but I like it!

Some of these posts are going to be slightly out of order but today I was able to bribe my son to help out stripping the OEM fuel tank with Fortnite V-Bucks.... 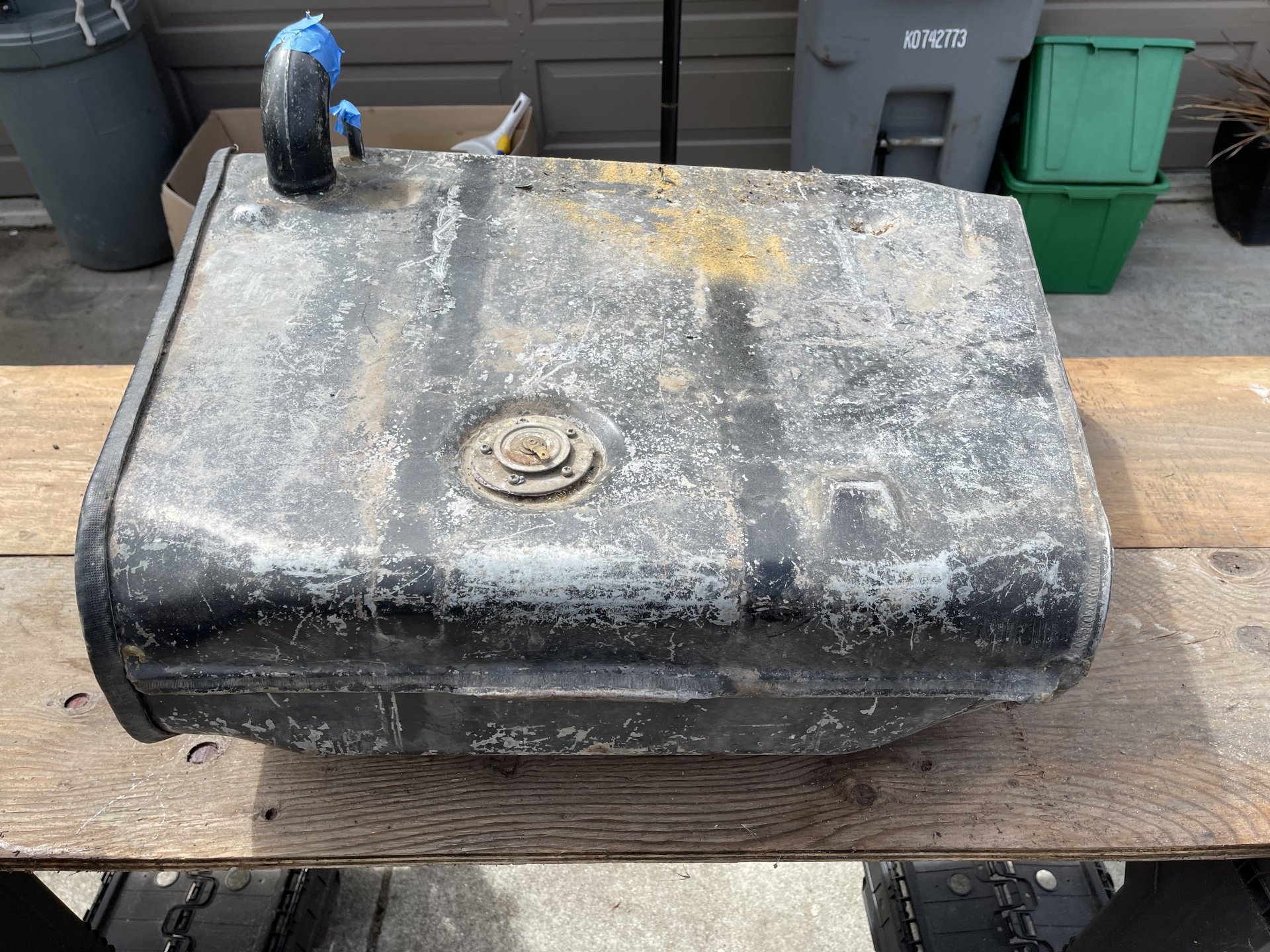 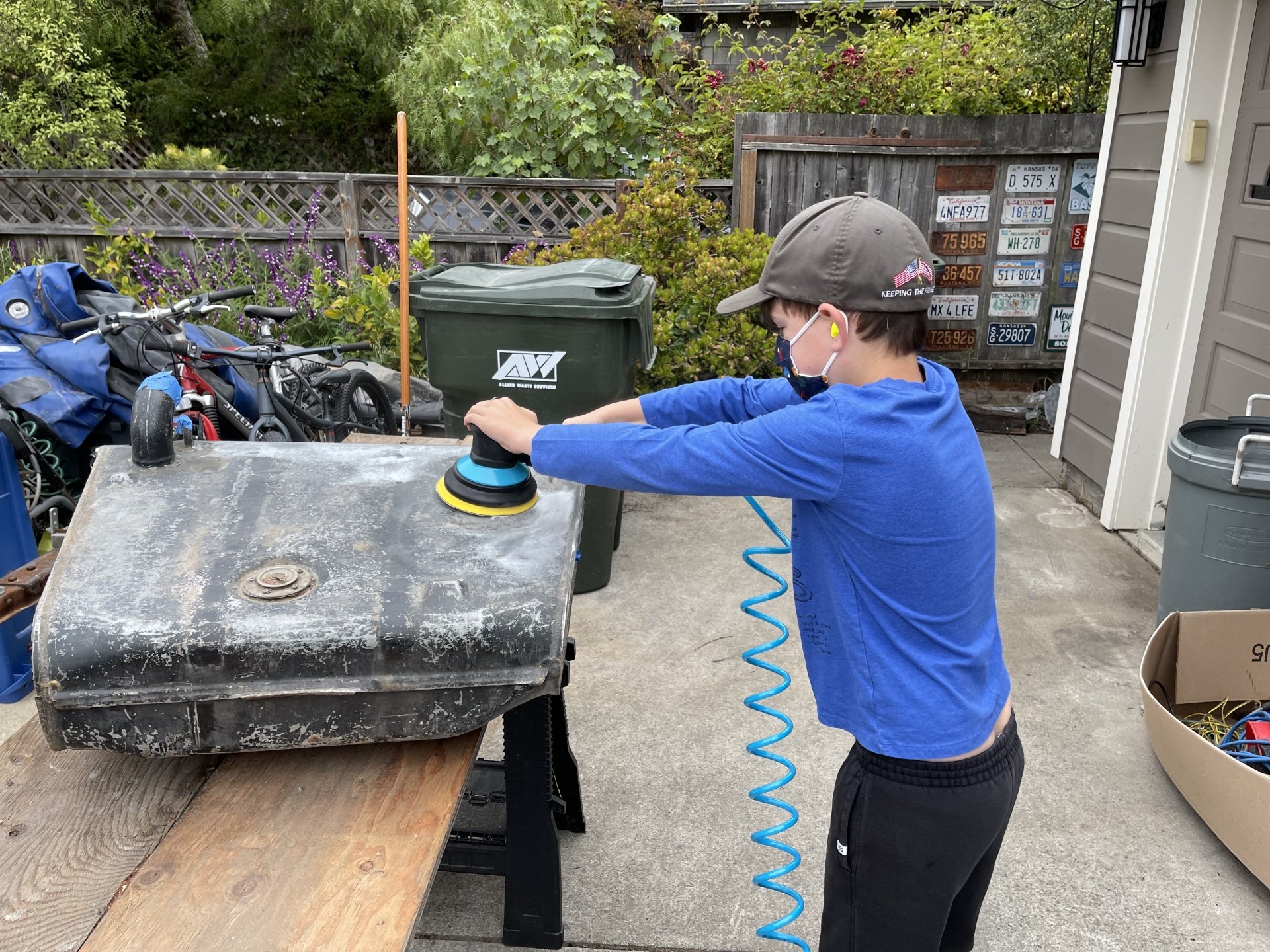 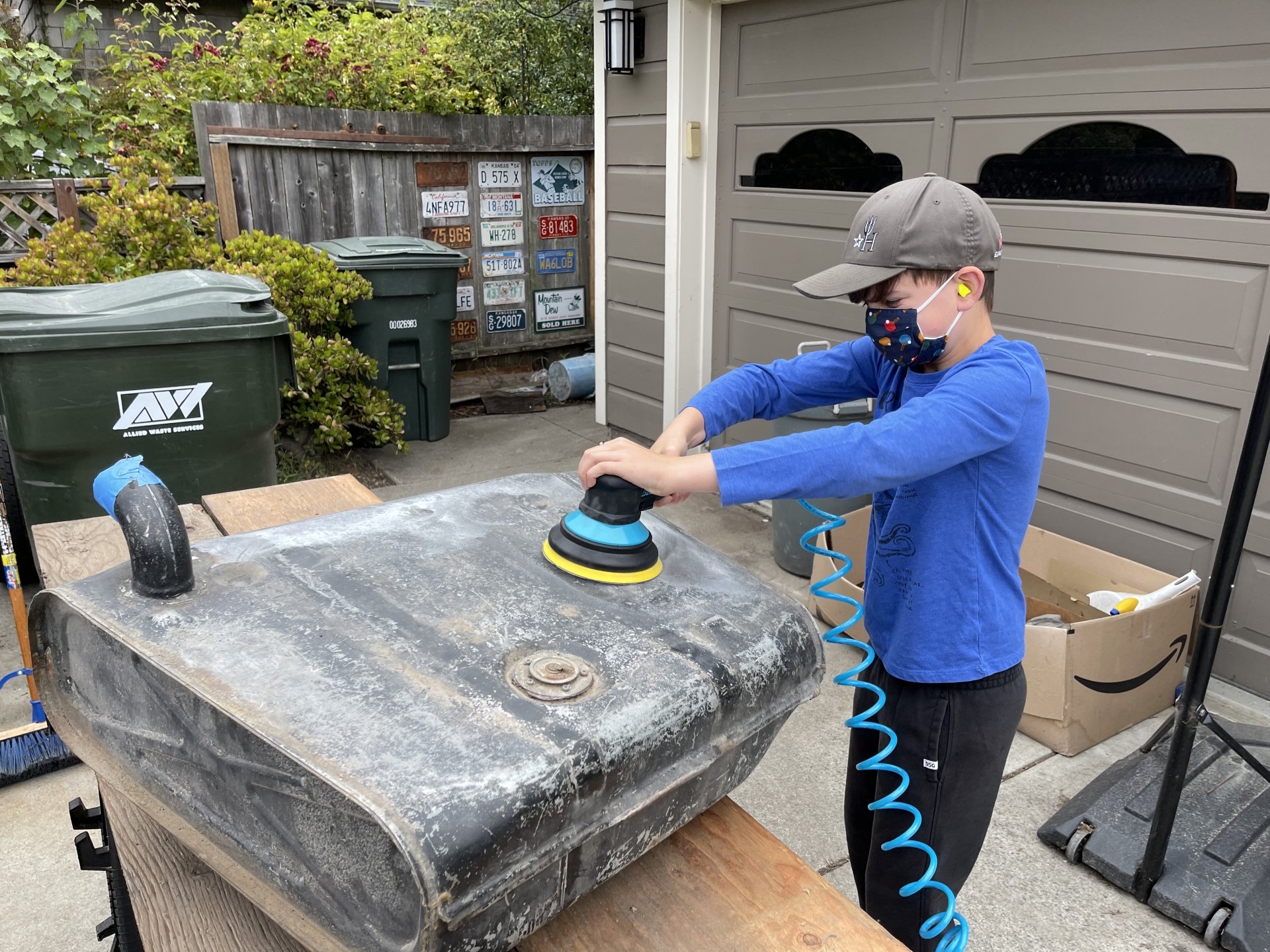 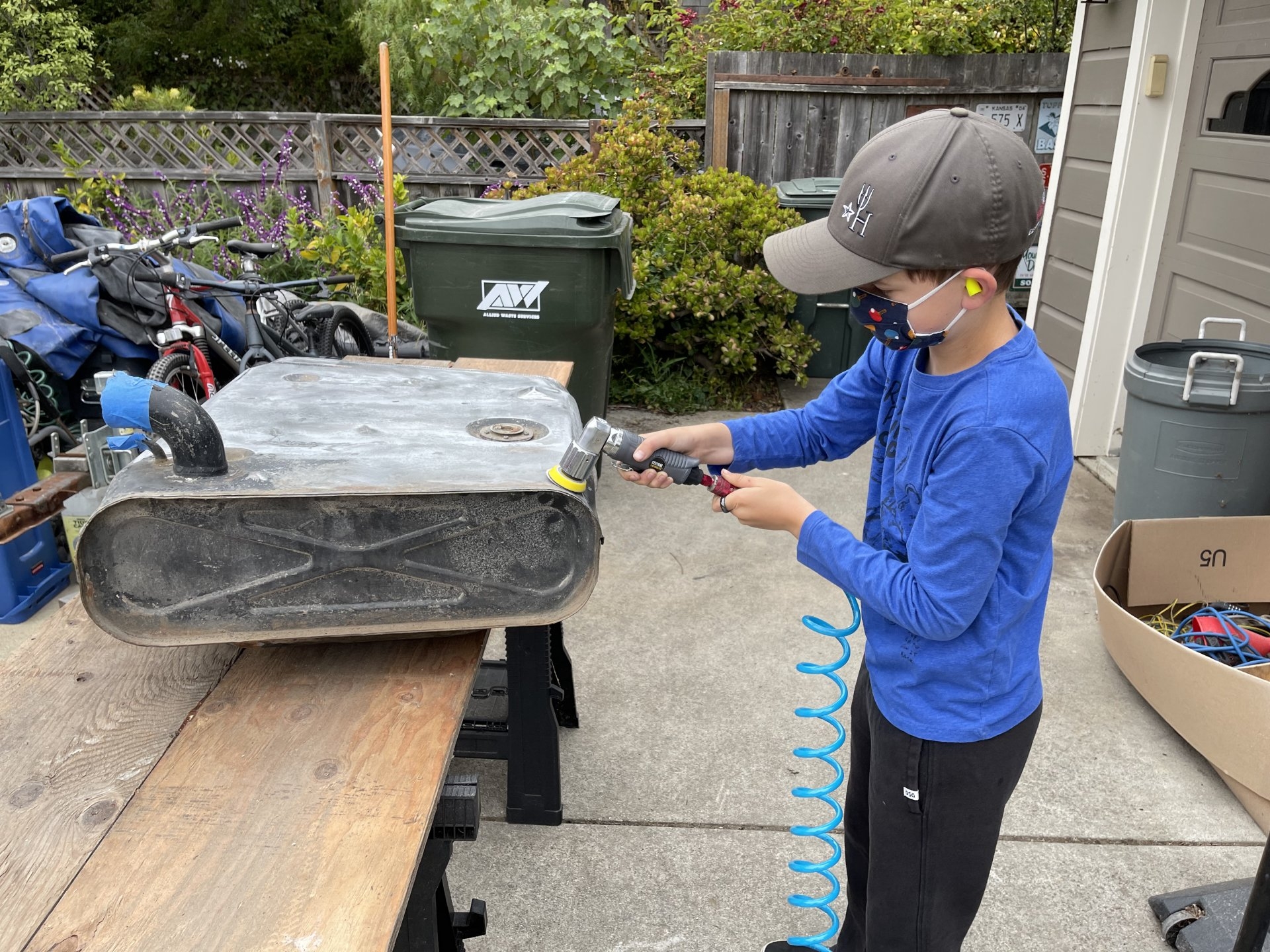 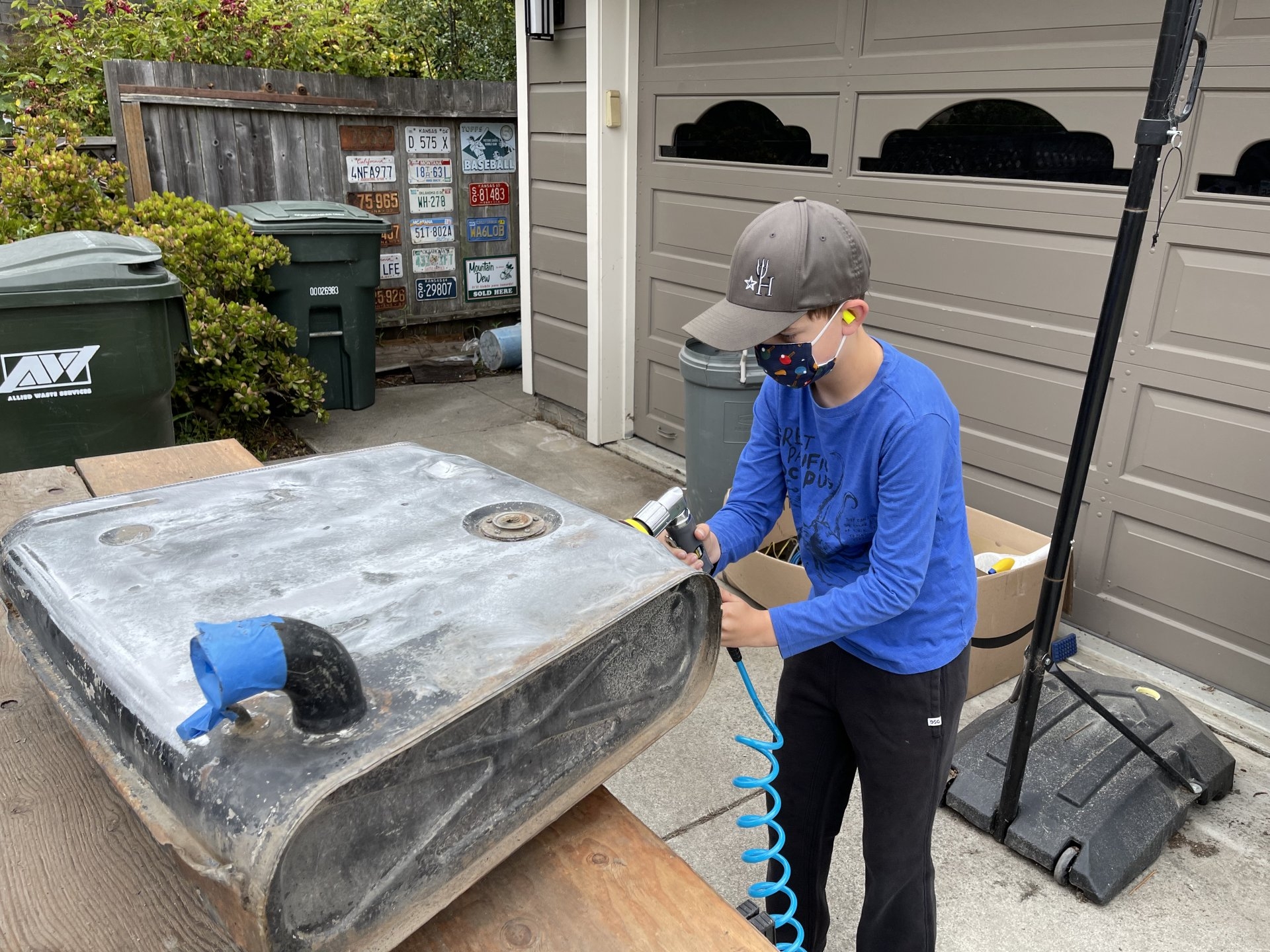 This was his first time using air tools and did pretty well although he definitely preferred the smaller 2" over the larger 6".

At the end of the day it's ready for POR-15 Metal Prep followed by primer and topcoat. 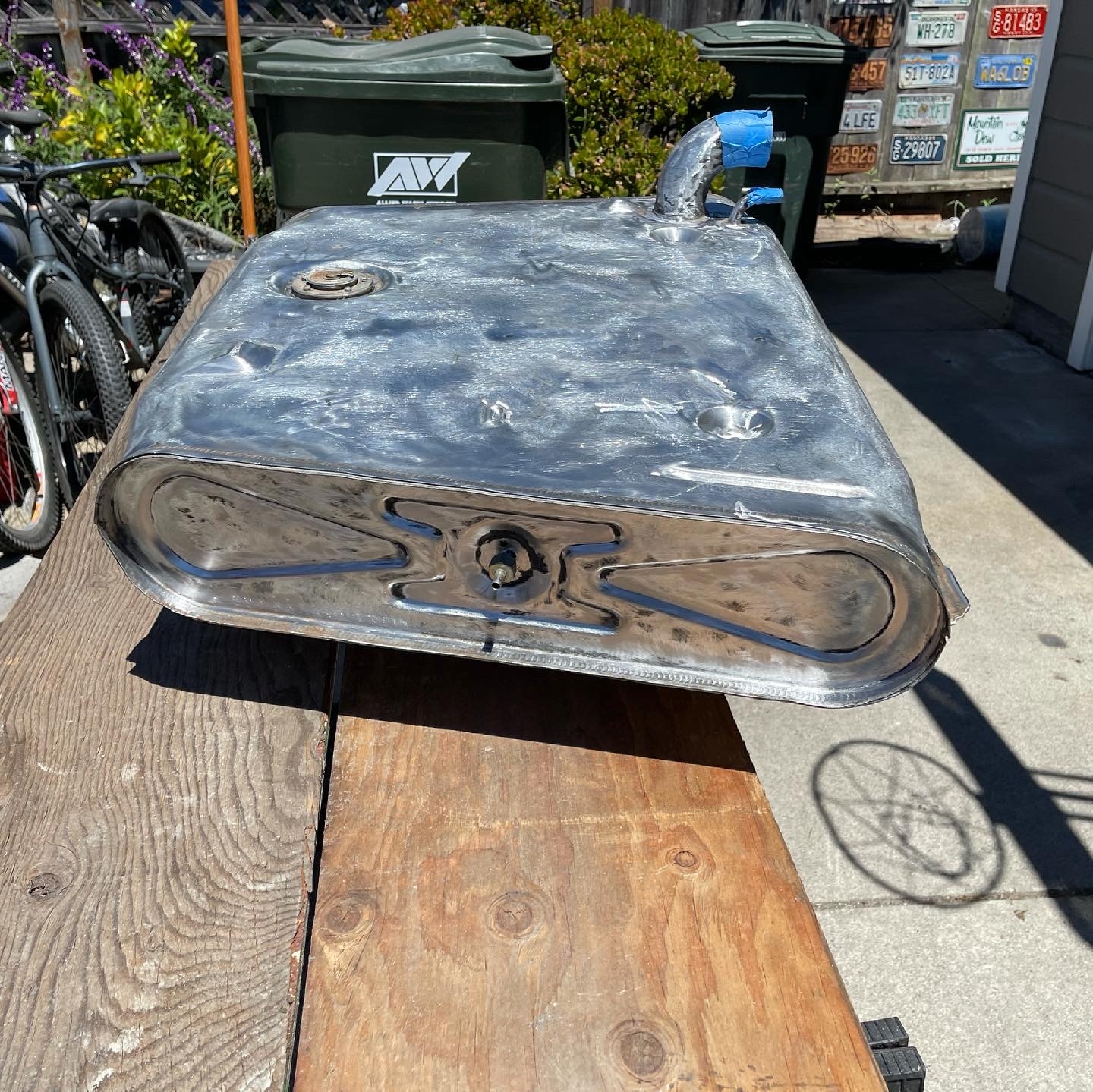 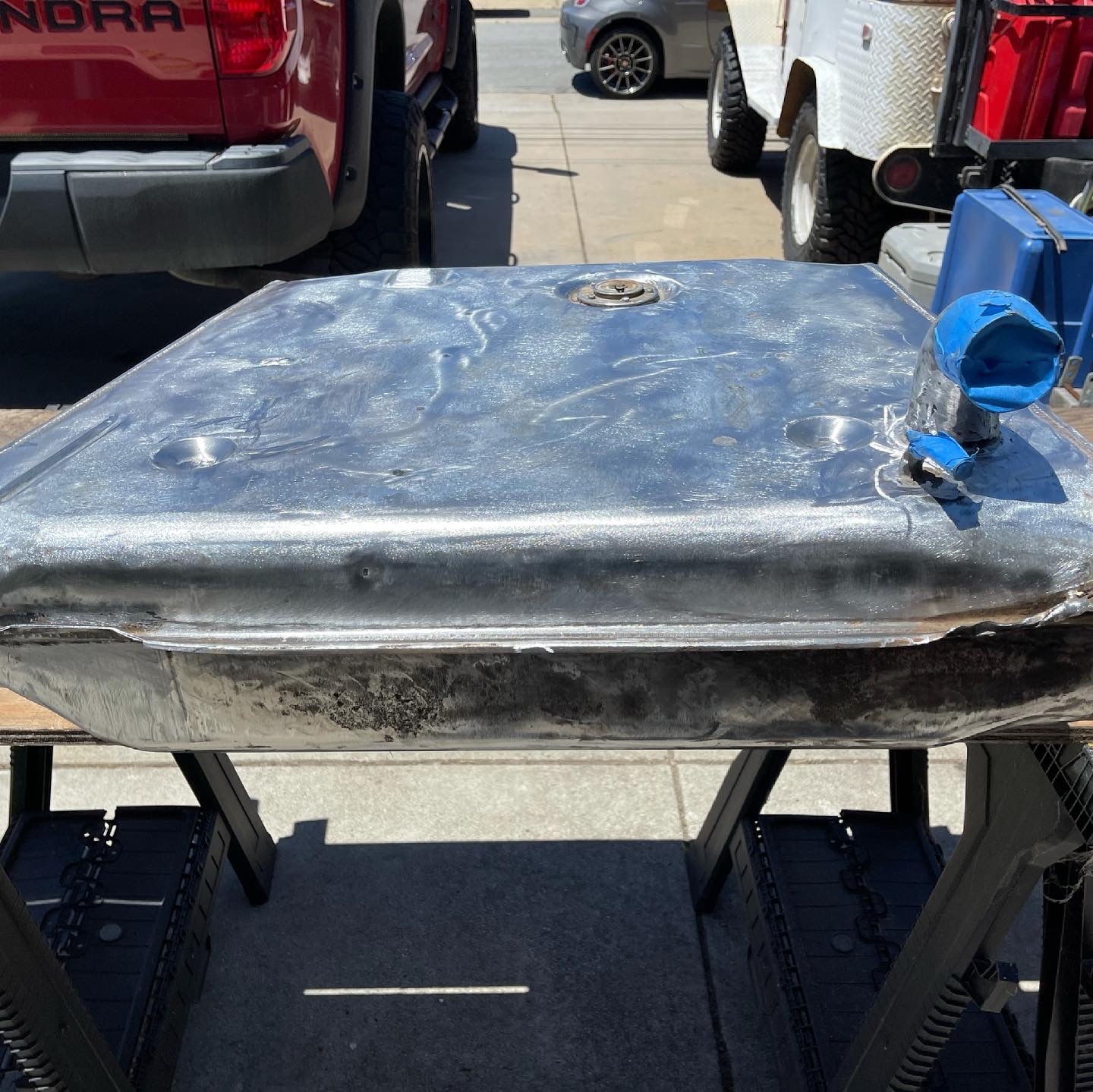 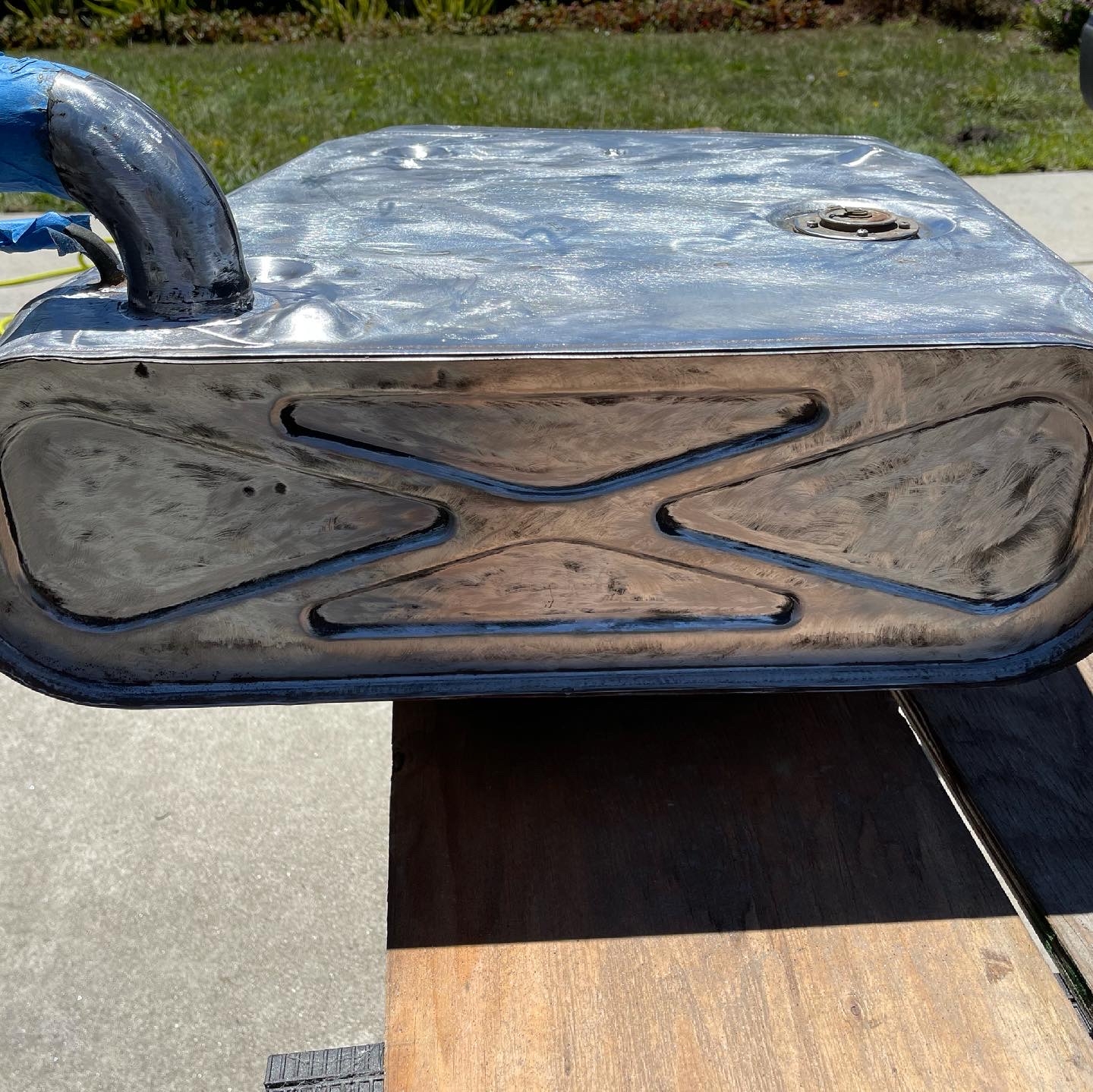 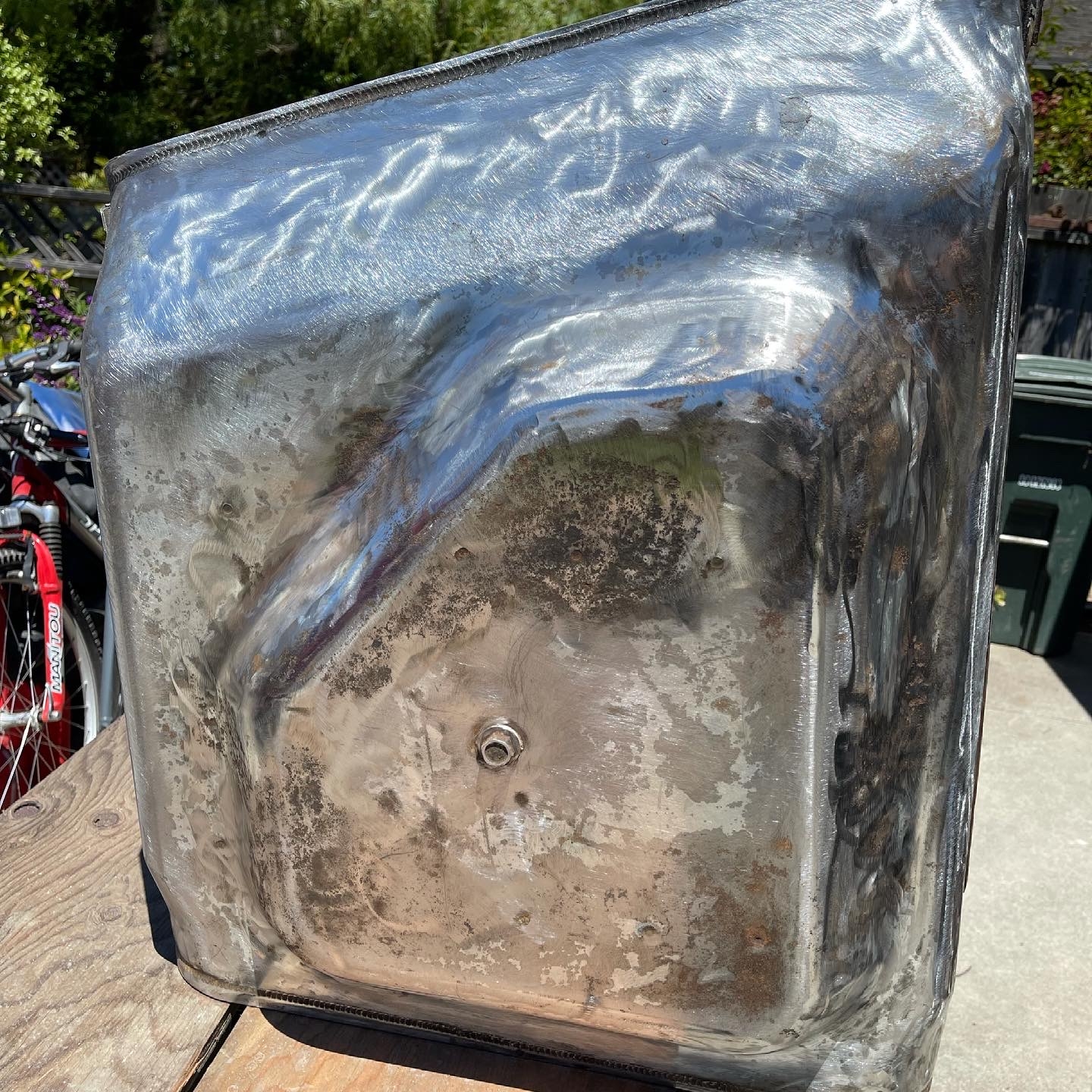 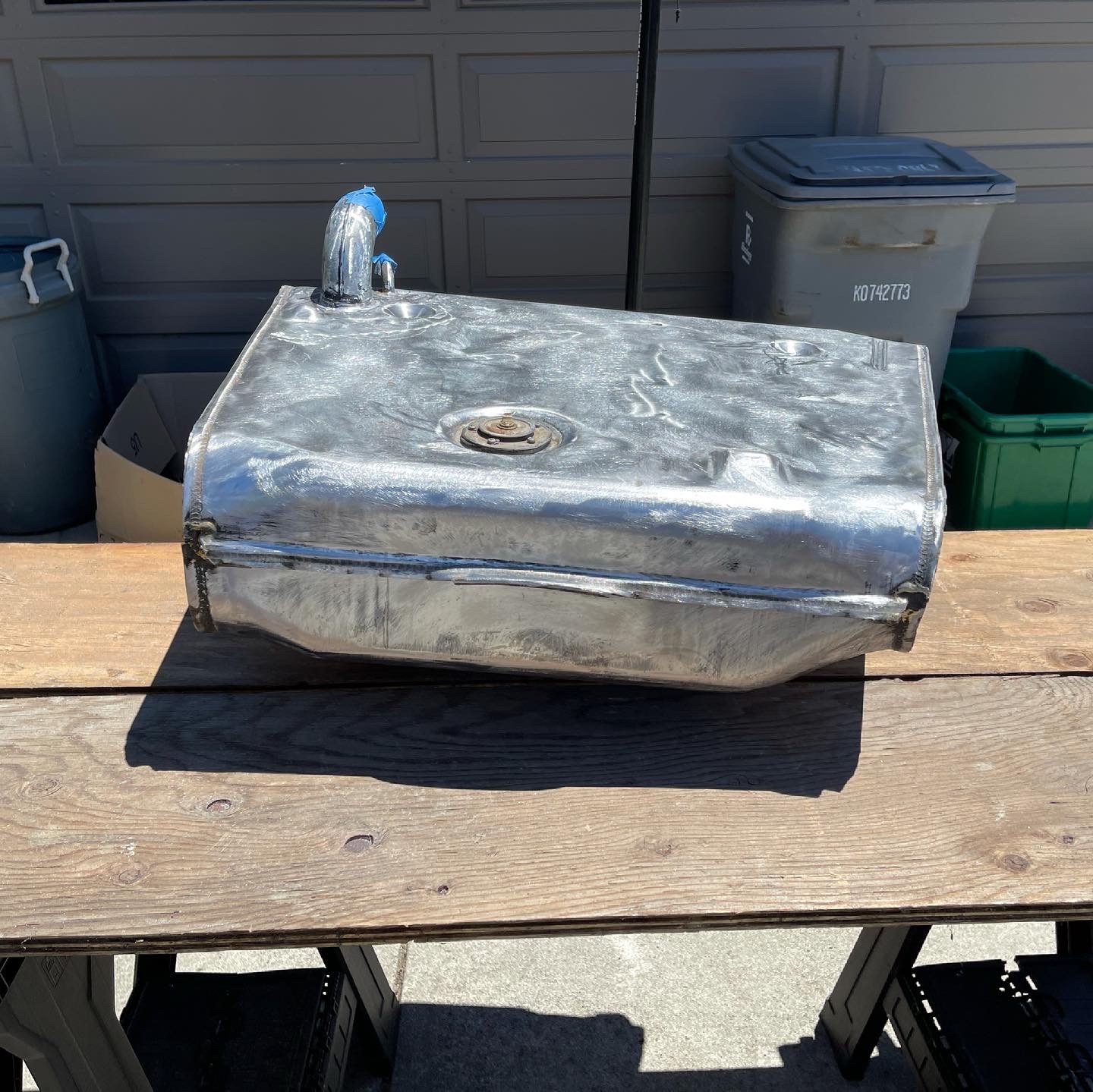 Overall was a great day.

Once I got the tank stripped I treated it with some POR-15 Metal Prep then hit it with some self-etching primer... 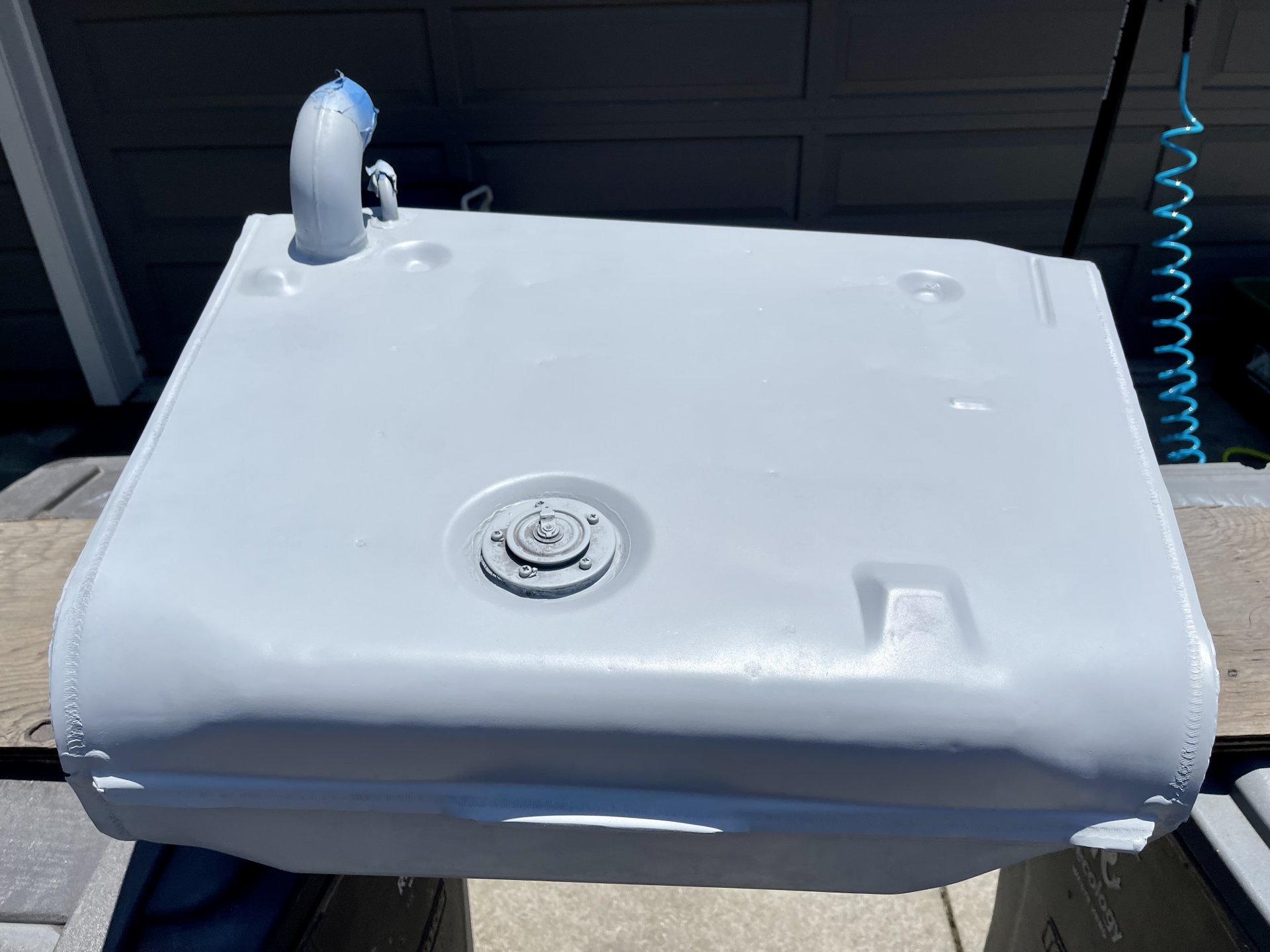 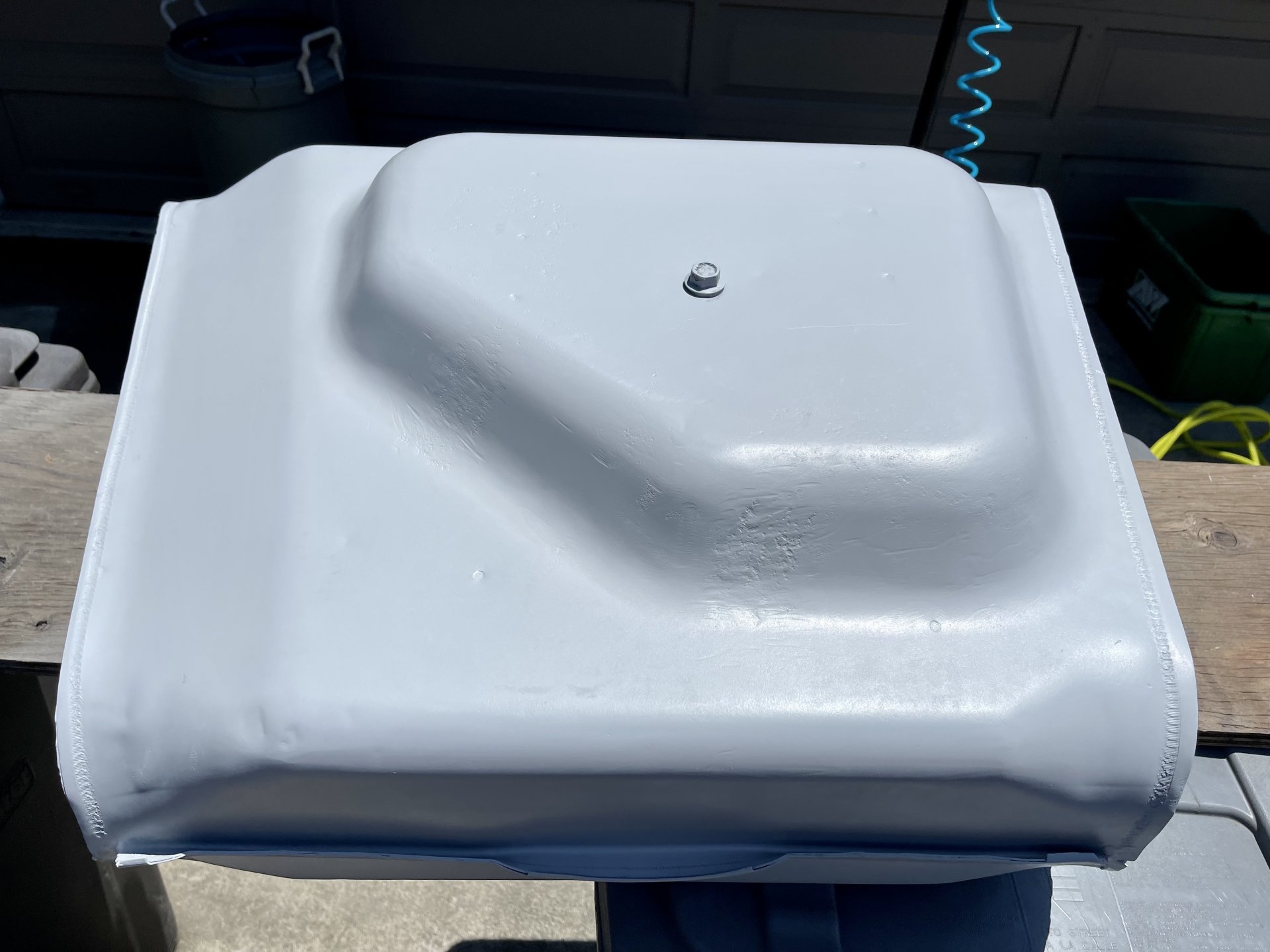 Is there a thread for colors?
2