Im on this, I got a set of whitelines and the rear with the landtank links is spot on and actually noticeable. the front is a no go just not going to work, So this is what J and yourself had mentioned before and I scored one on ebay new from an actual offroad shop cheaper than amazon.

RFB said:
Im on this, I got a set of whitelines and the rear with the landtank links is spot on and actually noticeable. the front is a no go just not going to work, So this is what J and yourself had mentioned before and I scored one on ebay new from an actual offroad shop cheaper than amazon.
Click to expand...

RFB said:
Im srry is there some part you didnt understand?/ I got whitelines even tho Jose mantioned going this route they came In Im not using them so Im going this route now.
Click to expand...

I didnt get the whole ebay thing
D

Is there an advertised ‘spring rate’ for the bar you used, and what spring rates do you have on your coilover?

nukegoat said:
I'm sort of smug about this one - I finally was able to crack the "secret" to packaging a 3-piece front sway bar on these things. The result? Fantastic. Driving on road is much improved again. 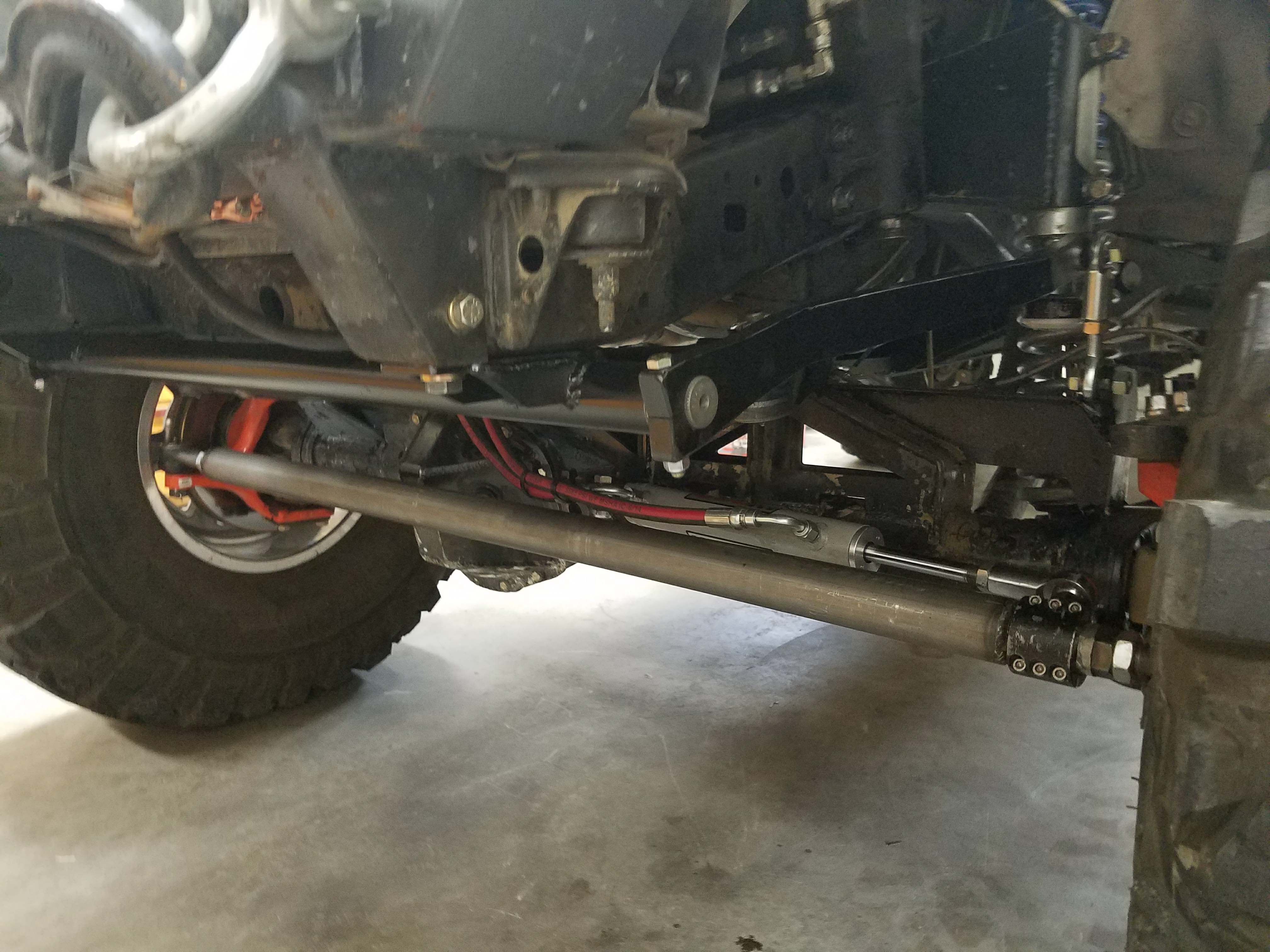 -----Context ----
As most of you know, the front sway bar with radius arms is sort of vestigial at first. It adds a little bit of roll resistance but with heavy coils and radius arms that turn the front axle housing into its own sort of sway bar, they aren't really that critical for folks. Whether you run disconnects or not, you probably won't notice a huge difference in flex or on-road performance because it's simply overshadowed by the limitations of a radius-arm suspension design.

With increasing numbers of people linking their 80 (@maxamillion2345, @Apounder, @jcardona1, @northwesttaco, @LandCruisinMy93), the initial reaction from most people is to go out and post poser shots of the rig flexed out in the front (while, interestingly, pretty much also demonstrating that the rear is now driving the front end). I've done it, so no offense intended. But after the initial shock and excitement of having a rig with real suspension travel wears off, the gravity of the situation sets in - the land cruiser is a fat pig and wallows around on-road.

If you have coilovers in the front, this wallowing is worse because the effective spring rates are much lower (with more preload/travel, obviously) and if you end up removing your rear sway bar, the whole package is pretty awful. For those of you still following me - what's the solution? It's to introduce more tunability into your rig.

Sway bars do, indeed, restrict flex, but they improve sidehilling, lateral stability, on-road performance, etc - and you minimize the effects of roll steer. Why 3-link the front, then, if you're just going to go back to restricting flex with a sway bar? Let's play with some numbers and hopefully you'll see:

Let's simplify things by suggesting that there's basically two spring rates we care about (let's even ignore wheel rates for a second):
1) Bump resistance (both sides compressing)
2) Flex resistance (one side compressing while the other side droops).

A stock 80 uses front coils in the 160-180 lb/in range, but radius arms restrict flex substantially (as does the stock sway bar, though inframarginally). I have no way of measuring what this rate was, but I suspect the roll resistance combined with the "bump resistance" was probably approaching or exceeding 1000lb/in. The result is usually a plush-ish on-road ride with a lot of lateral stability, good cornering, and such an inflexible suspension that even bad geometry (e.g. every lifted 80s with 10+ degrees of roll steer) is masked and the driving dynamics still feel "safe"-ish. Off-road, the front pretty much remains flat with the body and the rear does all the work.

An unbounded suspension (3-linked) with a single coil spring on each side has congruent bump resistance and flex resistance are the same (pedantics aside). For a lifted 80 on TJM coils, that may be in the neighborhood of 300lb/in. The result is a ride that feels stiffer on-road while quite wallowy in corners. Off-road, it "flexes" really well in the front, but it sort of sucks at speed and you don't enjoy any leany trails or sidehilling or anything. Most folks (myself included) will continue to run the rear sway bar, which now produces poser shots where the rear is doing all the work as mentioned before. The rear drives the front. Overall, the rig is more mountain goaty, but feels pretty heavy and compromisey.

Coilovers continue this trend, sort of. You have even less resistance to suspension movement, especially compared to the rear end. The front is really loose in droop but most people set their dual rate slider so that the lower spring kicks in and resists a bit more when sidehilling, etc. Still, it feels kind of loose and unpleasant.

The tl;dr is that packaging a sway bar in the front is a pain because the tire comes in, but the pitman arm juts out. So finding a path between those things is obnoxious. My solution is simple: clock the pitman arm over 2 splines. Mine doesn't contact the track bar mount (though it's verrrrryyy close now) and it provides enough room for an arm to pass right by the outer edge of the pitman arm at full lock while also staying away from the tire.

Granted, I'm running a wider axle - but I have more than enough room here and I'm not running wheel spacers while many of the rest of you are. I could have left the pitman arm alone and just threaded the needle, but I wanted to experiment for you guys running stock axles.

I used a 37.5" wide Schroeder sway bar with Keyser mfg arms. It's bolted under the frame rails by welding a 1.75" .120 wall piece of DOM to tabs that I can bolt into the OE tow hook mounts. I used bronze flanged bushings to hold the bar in place. I bent the arms themselves into a Z shape and ran them down to the axle with small end links (I have studded end links and longer connecting rods on order.) The advantage of going with the 37.5" wide Schroeder bar is that they're relatively common in racing applications so there's a lot of them out there and you can tune by changing the bar diameter, rather than messing with the location of the end links. These bars are also a better alloy than the Currie 4130 bars, and having owned both, far better in manufacturing quality (Polished, shot peened, etc - all the stuff you're supposed to do to a torsion bar.) Not that you probably aren't going to be able to get much adjustability out of using a different "hole" on the sway bar arm like most kits provide. I drilled a few holes in my arms but only 2 of them seem likely to be usable with the full range of motion.

Note: I should point out, in spite of my trashing on Currie bar quality, that I think if you're willing to go with a package deal, they do make a kit for the front of JKs that is remarkably similar to the design I cobbled together. it uses a .800 diameter bar which is a little small, but the alloy they use probably won't allow the full range of motion of any larger diameter bar. 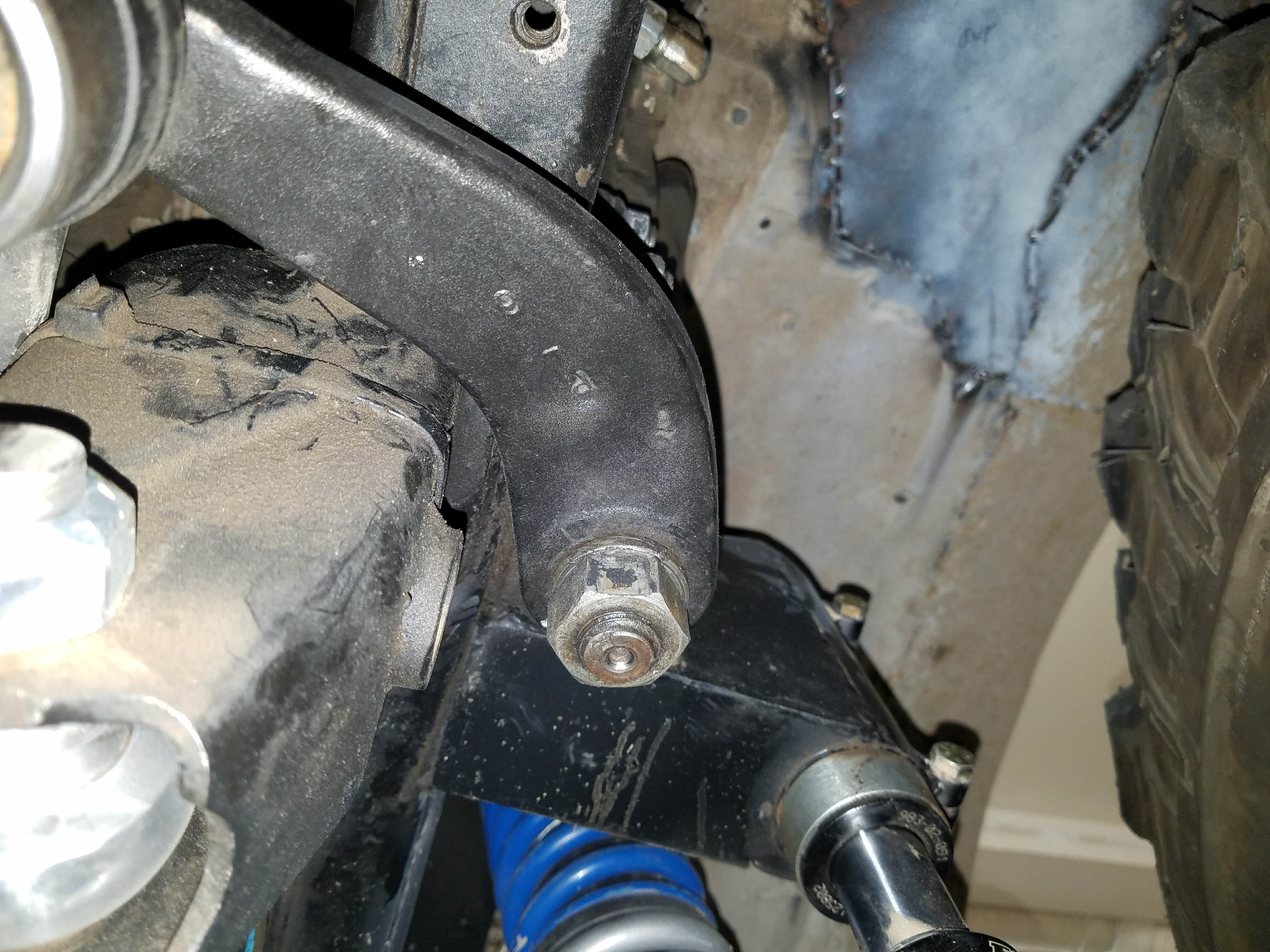 Not hitting the track bar bracket. 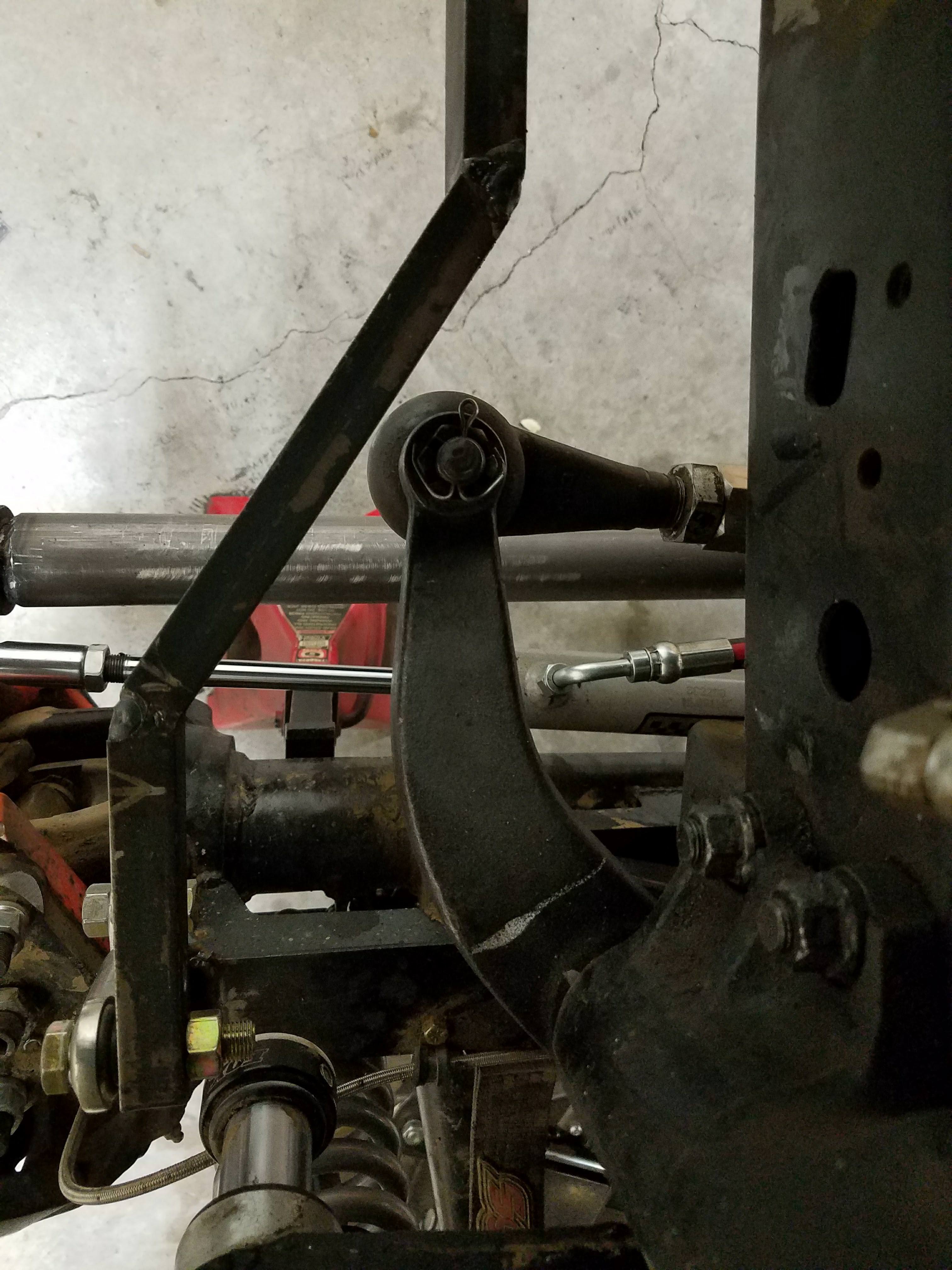 Therefore not hitting the pitman arm 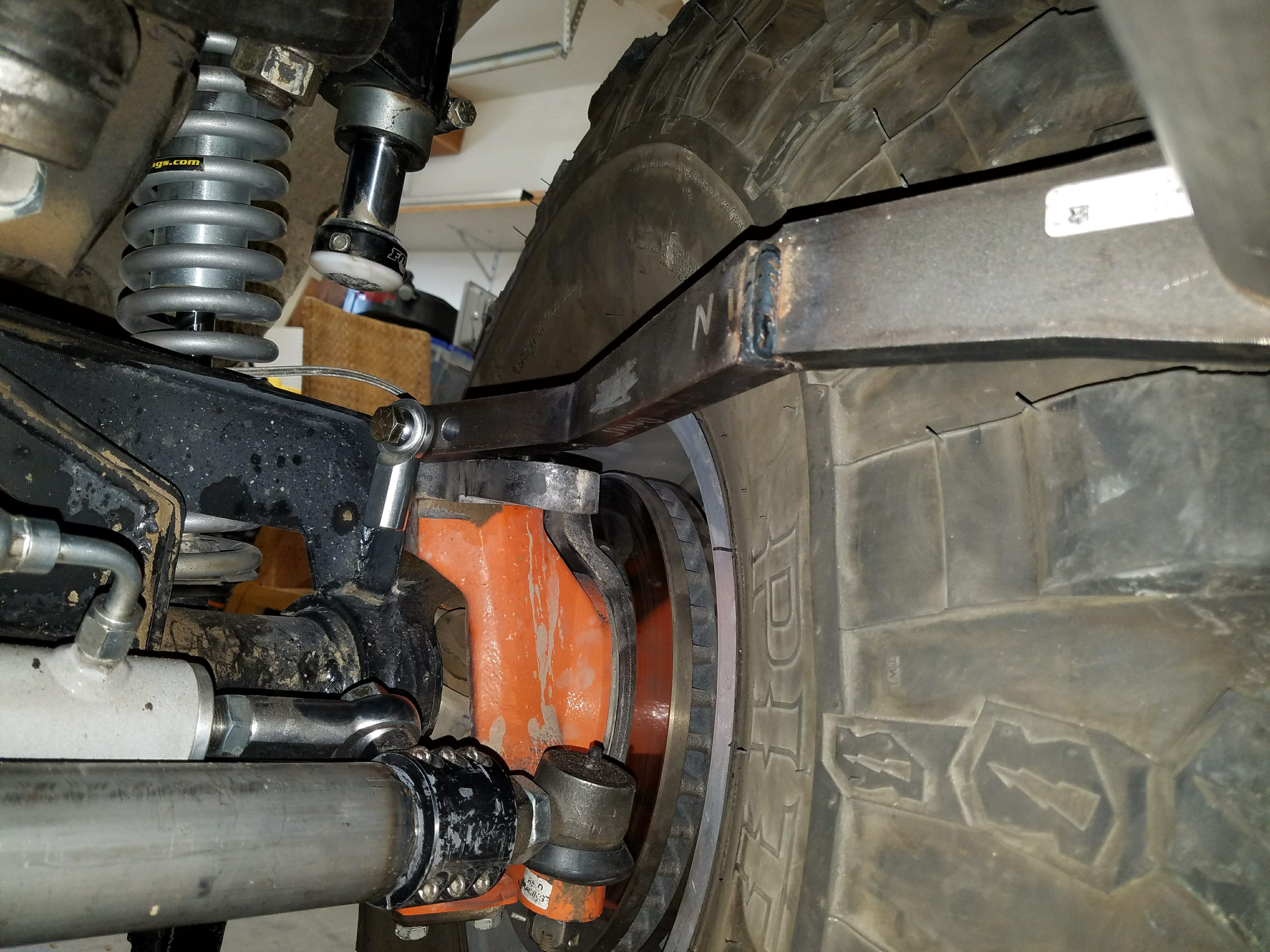 Or the tire. Even the fatty fat fat pitbulls. 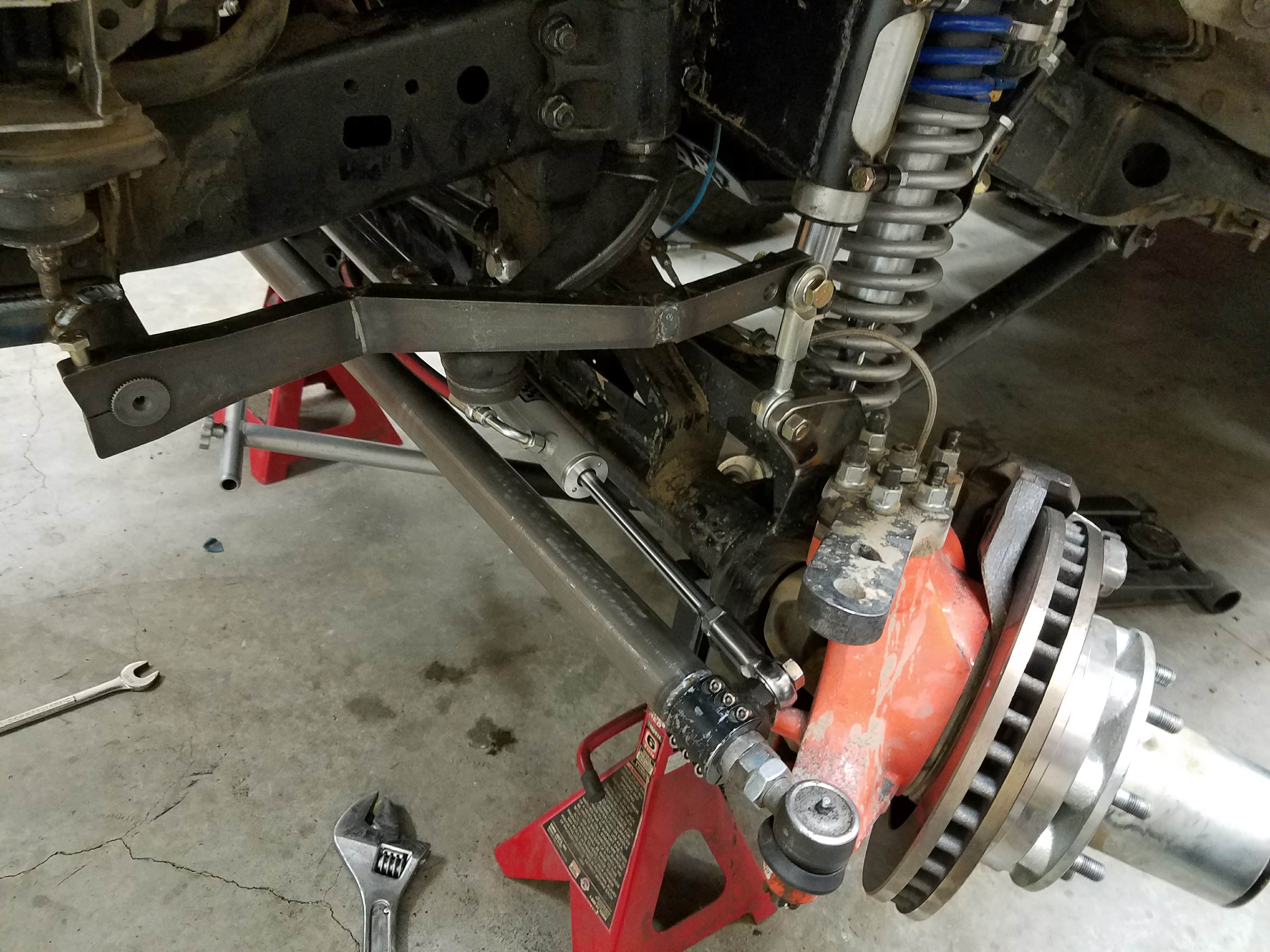 Better shot. If you didn't read the entire rambling prior to this, I am getting longer end links - I just happened to have these heims laying around for mock-up and initial testing.

OK, that's all for now. I have more to say but this is far too long winded already.
Click to expand...