I'm sure you caught it but worth noting. If you buy a rack system and follow their recommendations you'll get cross bars that are not as wide as these guys. Ignore the recommendations and get at least 72" cross bars. The extra width comes in handy for tying things down, and putting more stuff up there. I actually put an entire bike on each side OUTSIDE of the towers on big trips, and have room for usual number between the towers. I think that's the most important advice, cause they cost the same......

Doug, I seriously considered 72 inch bars on mine (since I had to buy bars). I took a 72 and a 66 out to my truck and laid them on top. The 72's just had a little too much overhang for me. I wanted them to originally be around 62 inches (enough to secure a 60 inch wide basket if necessary), but the 66's work great for my application. When I go on my beach campin trip this summer, I'll slide the bars all the way to the right on the towers to mount my sunshade. It will look funny on the drive down, but I'll be made in the shade

I made my own loader bar (yakima sells one with a sand dollar end for a ridiculous amount of money). You can use aluminum tubing that is just a hair smaller than the ID of the yakima tubing. My donor tubing was the wing tube from my RC airplane, 7/8" if i recall correctly. I used one of the factory yakima plugs as an end cap. really makes loading boats easy by yourself.

Yeah, the extra inches can be a bit much, but those extra inches can be useful. I've also done what you describe and slid them all the way to one side or the other. Looks funny. Somewhere I have a picture of the 93 with 4 new Michelins, 3 bikes, a 20cf roof box and a two seat kids bike trailer on the roof.

Love the tube in a tube idea. I can't do that because mine are Thule racks. I don't carry a boat, but I've wanted to figure something like that out for a poor man's camp awning.

Thule probably has something similar for their rack system. I'm going to put one in my front bar when I can find similar tubing. I'll have that one come out the passenger side as well. Would allow for awnings and other neat things.

DON'T GET A THULE! I've got one from previous owner. Rain gutter clamps are loose and it's not quite wide enough. Most Yakima owners I've talked to are very happy with theirs.

Also, I'd suggest you measure the width of your canoe and get a bar twice that for two. I've got (2) Old Towne 17' canoes and have to prop one.

Don't worry about putting a canoe on the roof rack, I've done it a couple of times on our Sienna with no problems.

whatever you do dont load your 80 on your canoe like this.... 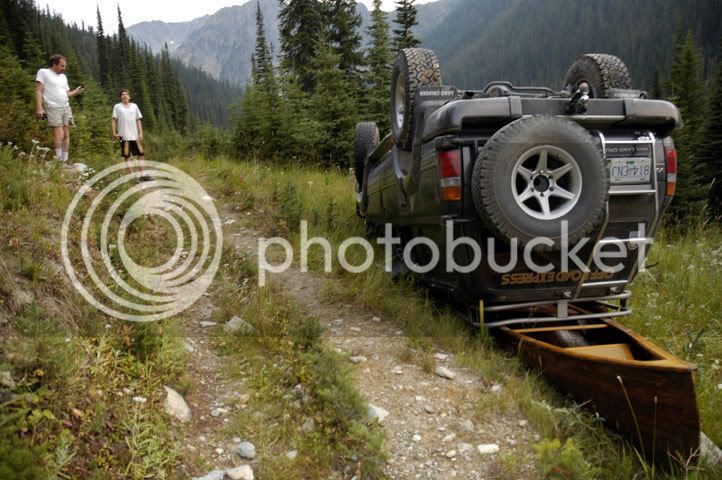 OH MY GOD!! how did you get it back upright, looks like your in the middle of nowhere

it was another mudder who posted for advice and ended up winching himself over w/ a snatch block and driving out under his own power after gettin the tranny freed.

apologies to the driver if necessary..... but these things happen and now you got another killer rig 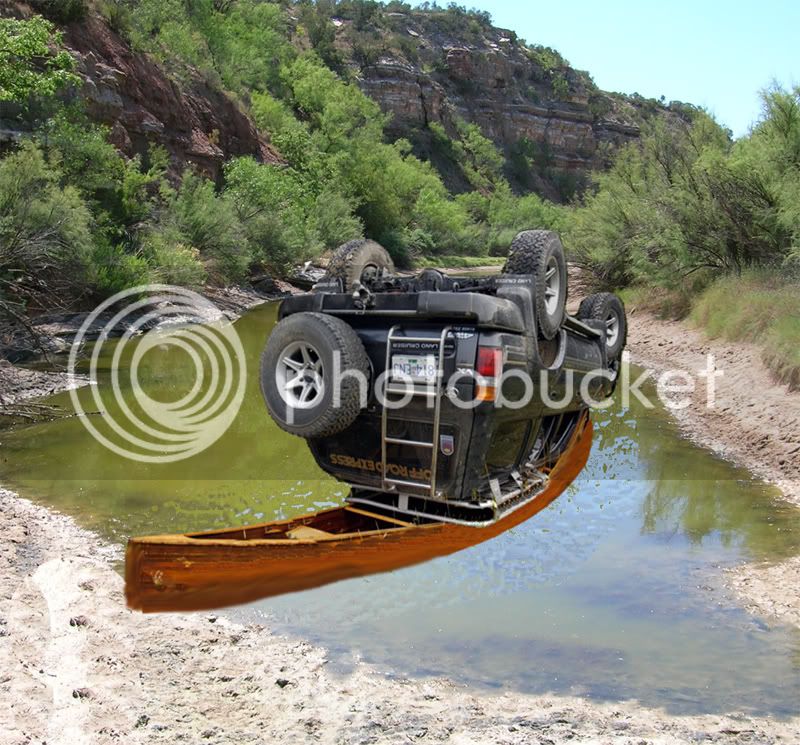 I have Thule racks that came with my FJ62. They fit perfectly on the '80, and work great with my canoe and Grumman Sprotsman aluminum boat. I've carried both at once, in fact, although it was crowded!

You need the canoe bracket kit too. The racks connect onto the drip rails, and hold just fine. I've carried the canoe acroos country with zero problems.

2d post. My Thule rack works just fine on the '80. Clamps onto the drip rail. I've hauled a very heavy fiberglas canoe and a Grumman Sportsman aluminum boat cross country with no problems. You do need to buy a canoe bracket set as well. Ain't none of it cheap, but it works fine.

Yakima 1A Raingutter towers, 58" bars minimum fit. 66" bars work well, but mine have caught on trees on the trail. I have a 16' Old Town Camper, 60lbs. With the 1A towers on the 80 you can move the bars real close to the back and front of the roof. Maximum spread between the bars is key. The rear bar is close enought to the back of the truck that I can rest one end of the boat there and slide it on. Tie the canoe down with some good cam straps or 8mm cord and trucker's hitches. 75mph on I40 across NC, no movement, no gunwhale brackets, no bow/stern lines. You will want the fairing, cause the humming will drive you friggin' nuts without it.

I don't want to turn this into a Thule vs Yakima thread, but the comment criticizing Thule's for "loose" clamps and "not long enough" crossbars is simply misleading. You can get crossbars any width you want and the clamps go on so tight they'll tear the rain gutters off in a crash. Let me give you an example.

Several years ago, I attended a wedding near LA and planned to go wheeling on Miller Jeep Trail afterwards. We drove down and I had 2 mountain bikes on the roof. My bro in law has an identical 80 in white. After the wedding, we switched my racks/bikes to his car and his parents drove the white one back to LA while a bunch of us went wheeling. When I put the Thule rack on the white one, I actually thought "Hmm, I think I'll leave the clamps less tight than I prefer in the event his parents hit something with the bikes." because I've seen them tear off drip rails (not the trim - the steel drip rail). Yep, 3 hours later they drove it under a steel hotel awning and tore the entire awning frame off the front of the building - it collapsed onto the 80. Both bikes were trashed, the rack was torn off, gouging the metal all the way and 2 of the feet/towers were twisted.

Their insurance paid for a new Thule rack, but I kept the old one also. I spent a half hour with a hammer and vice straightening the two bent feet and since that day I have used them for thousands of miles. They're still in use today with no sign of what happened save a gouge in the incredibly thick plastic cover of one steel cross bar. Even the bike mounts and trays held up fine.

So, Thule racks not durable? Not in my world. I considered Yakimas but their solution for the 80 towers/feet was a steel tower with a plastic extension to clear the factory roof rack. Thule's was a solid steel tower in a longer length. The choice was clear.

I have sold and installed both brands for the last 20 years. Both are good. Hell, they interchange accessories these days. Round bar, rectangular bar, whatever...

I don't have a factory rack, but I do think my Yakima sits too high for the Load Warrior and Mega Warrior cargo baskets. If cargo on the roof is the need I'd be looking for some thing else. That one Alvaro reps looks really good to me.

First off--that was a beautiful wooden canoe that 80 was mounted to in a previous post. I wonder how the boat fared.

And to follow up on IdahoDoug's comments--Yakima v. thule is really all a matter of personal preference. Both companies make great products that serve the same purposes. In my case, I happened to start off with some Yakima stuff given to me years ago and once you start down the road with one system (before everything was interchangeable) you tend to stick with it as the cost to switch is astronomical. For the record, the Yakima Raingutter towers aren't "plastic" that would make you think of tupperware, they are actually a nylon material and very tough. Neither company makes garbage.

Definitely buy load bars as wide you can get--you can always take a hacksaw to a bar that's too long but it's hard to lengthen one that's too short. I happen to have a set of 78s and a set of 58s but I was also able to score two sets of towers so I can swap out the bars very easily. I got the second set of towers used from another biker for a case of beer. Lots of people have old sets of raingutter towers lying around with no use anymore. You shouldn't have to spend $130 on a new set of four towers anymore.
You must log in or register to reply here.