I need to figure out a gun rack before huntin season. Any of you guys hunters, if so what are you using.

Get the "Dashman" dash box.
Mark Vickers is his name I believe

Will that thing fit a scoped rifle? Looking for something a little different, need to hold at least 2 rifles.

I currently have a gun rack installed in the ceiling of my HJ45
( 2 gun model from "Big Sky") that is designed to hold either rifles or shotguns.) I like the setup because the firearms are not visible when someone looks in the window. I will be glad to photograph the setup if you are interested. .......................1978HJ45

Hunter here for sure

i am thinking about installing a set of the "ole school type", San Angelo brand/type metal gun racks, to hold my deer rifle, or my recurve. Maybe attach to the roll bar, or build a bracker of some sort . I have a stand up type gun mount that i got for my off-road golf cart, put i think it would take up to much room on the passenger side of the fj. Hope someone has a good idea.

I did not ask what type of Cruiser the gun rack will be installed in however my 1978 HJ45 has a metal roof. I made brackets that attach the gun rack to the structure just above the doors ( there is a small lip on all 40/45 Series ) and did not drill holes in my roof. The brackets can be removed along with the gun rack and with the exception of a couple of small screw holes there will be no evidence the rack was ever there. I will be glad to take photos and post them here are via a P.M.
..............1978HJ45 ( I live in the Southern U.S. where hunting ranks right up there with religion, football and apple pie)

You could get yourself some quickfists and get creative. If you have your hardtop installed then you can make a shelf forward or rear.
I just bag mine in the rear for now.
Now has anyone made a quick access bow rack?

Hi Brasco20, I will photograph the gun rack today and will post the photos on this thread this afternoon or in the morning at the latest. The rack holds a Ruger rifle with scope with no problems so hopefully it will serve your purpose. ...............1978HJ45
A

most of the 45's ive seen in the bush here in australia are homemade. two "Y" shaped thingo's are made out of about 10mm rod. one is bolted on the handle above the glovebox and the other is bolted where that big plastic bolt is for the windscreen (or whatever you call it). it is easily seen through the window but here in australia its illegal to have a gun seen in public like than anyhow. so the mount is only used while hunting or while your on your own property.

On my hardtop I have one gun racks attached to the top sides where the fiberglass top attaches. The guns go up and over the roll bar and into the holder - mostly out of site. But most importantly, out of the way of the dogs. Kind of inconvenient, but less so than other things I've tried.

Then I put a bow rack on either side of the rear hatch. That's inconvenient too, but again, less so than trying to mount a bow elsewhere.

On my FJ45 I used large heavy earth magnets to hold my bow/gun rack on the back of the cab. Unfortunately, that does not offer safety from the elements and theft protection comes from a cable wrapped around the middle rear window ('63).

I have a bench seat mount rack that holds two guns and it works pretty well. So long as you have no dogs.

I bought a UTV gun rack from Cabela's and molted to the floor. It is a universal type mount that can be angled between horizontal and vertical. Mine bolts in between my front seats and is a little high for the .300WSM. It basically has a boot for the stock and a bracket and rubber snubber for the barrel.

Back when I was bowhunting and had my 72 Chevota I made a simple hood rack for my bow for when I was travelling off the highway. Carpeted board with snubber straps. Don't have any pics of that setup but it was better than stuffing it in and out as I drove around between timber patches. I stowed it in the case in the back when I went out on the road. Didn't drill any holes, just attached to the hood hooks and had a couple of gutter hook straps, worked well. The new bows are more compact than my old Hoyt so maybe they're easier to take in and out, sometimes in the brush it was like carrying a set of bagpipes......

Having a roof mounted gun rack has nothing to do with legality
at least here in the State of Georgia. It simply keeps prying eyes from seeing that there are firearms in the vehicle. You would be hard pressed to find a truck in this region that did not contain firearms ( most would be hanging in the rear glass clearly visible to all.) ..........................1978HJ45

If I remember correctly this gun rack is called "sky bar" and is available through Cabelas or Bass Pro Shop. It was offered in a single or double firearm setup. I fabricated the mounts that anchor the unit over the door opening. ..........1978HJ45 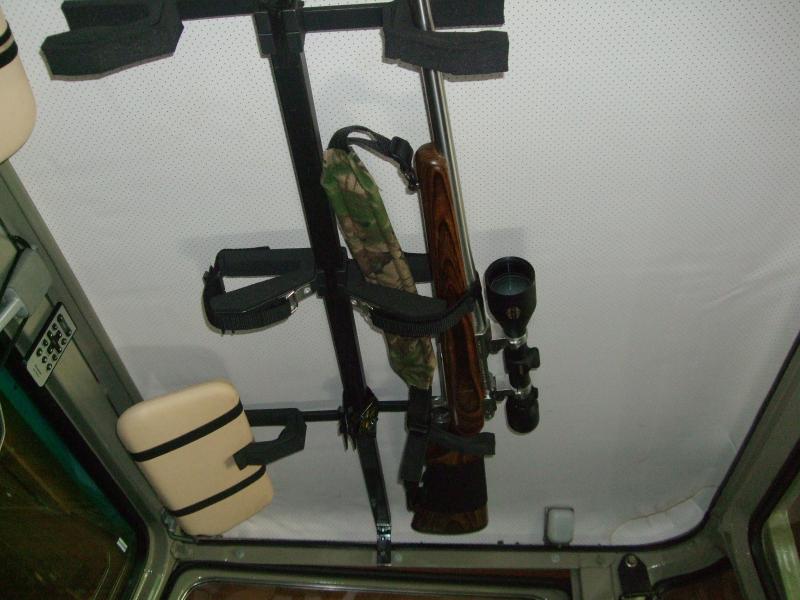 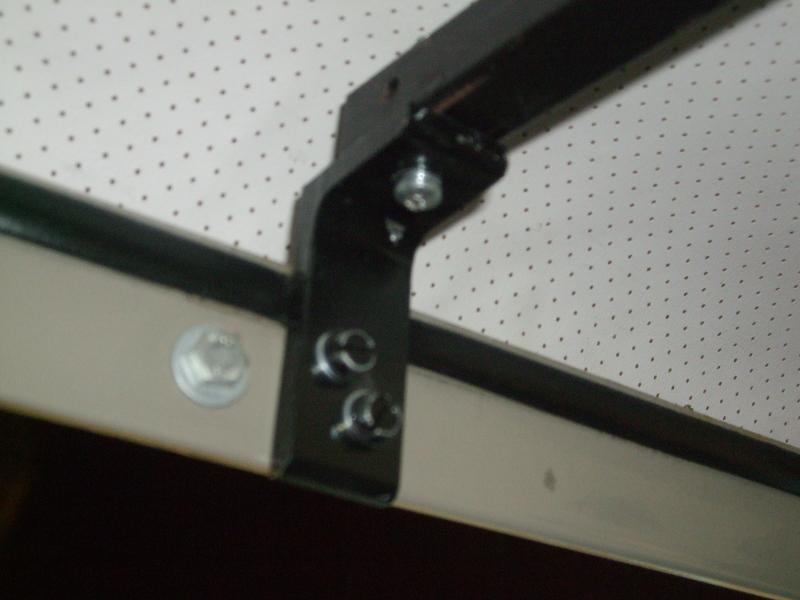 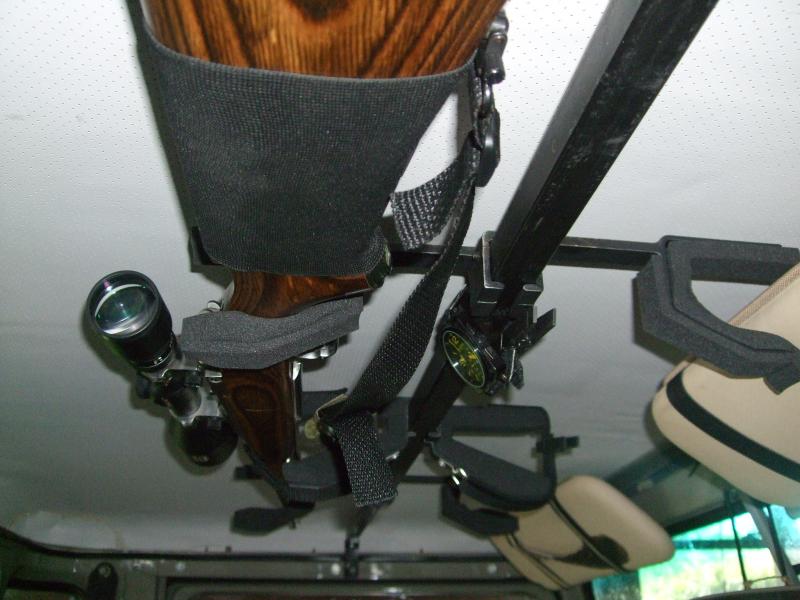 Nice!! i like that set-up alot! Especially your "clock" hehee