I am devastated. Went to refuel yesterday, and when I opened my fuel door, I realized one of the coolest things that I always loved on my cruiser, my very authentic-looking fuel cap, was not there! My previous stop for fuel had been late at night after a long ugly day at work. Apparently, I did what I had always hoped I wouldn't do: left the cap on my runnng board and drove off. I made it a habit to leave it on the running board in hopes that it would be much harder to "miss" and forget about than leaving it on the gas pump or somewhere else.

The cap was all metal of course and said "Diesel Fuel Only" and had japanese symbols on it as well, which I can only assume meant the same thing in Japanese, if translated. I found a basic metal cap that seems to work just fine at Autozone, but I really want to find another cap like the one I had. I searched all over MUD and google searched yesterday and today with no luck. I did get a part number for the fuel cap off of Toyodiy.com, 77310-12100, but I have no idea if I were to order the part if it is just going to be a basic metal cap with no writing or if it is going to be an exact replacement for my old one. Anyone have any helpful information on this? Does anyone else with a BJ or HJ have the cap I described? Was it OE, and if so, still available? TIA guys!

Where r u in Fla?? I lost a cap in Bradenton Fla a couple of years ago , went back searched the roadsides etc etc and pulled into the Gas Station and the inside attendent had picked it up for me from the ground , Moral: back track and look and ask
1981 BJ42
D

Meant to include that in OP...already went back to the station, spoke to owner who checked his "stash" of found and turned in caps and scoured the area around the pump I used and exit I left from - nothing. My guess is the cap probably "hung on" for a while, but after a good bump or turn, probably flew off. It was a long ride home with plenty of places for it to fly off, and keep in mind, we are now talking about almost a week ago since I actually lost it... 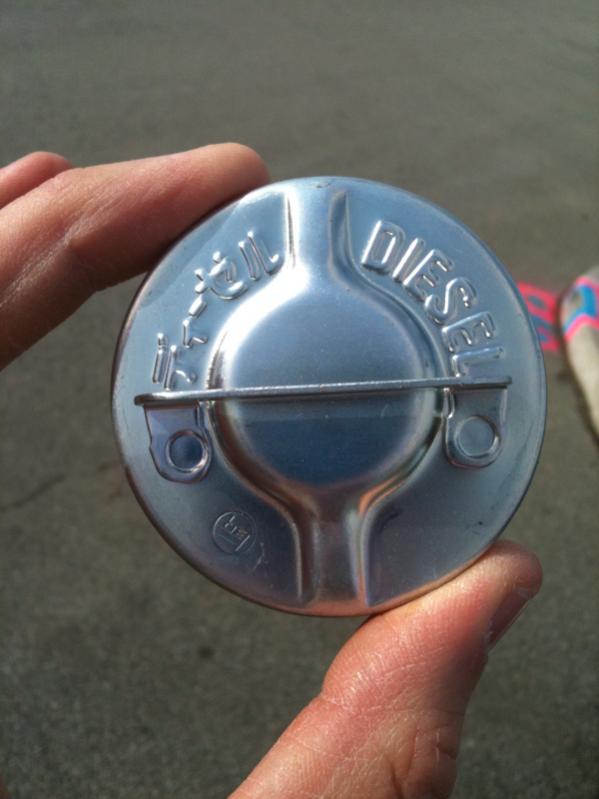 Cannot help but am extending great sympathy to you. Lost mine the same way several years ago, but was 2 states away when I realized it. Called friends and asked them to check the gas station where I left it atop the pump. No luck. GOOD LUCK finding a perfect replacement!
2008 FJ Cruiser
1987 Land Cruiser BJ71
1976 BMW R75/6
2017 BMW R9T

Yup, picture above *looks* like it! (Although mine was nicely "weathered" and authentic-looking!) For some reason I remember it saying "Diesel Fuel" or "Diesel Fuel Only"....more than just "Diesel", but I do recall mine had the "Teq" symbol as above. Studying the picture more closely, it seems it would have been nearly impossible for it to have said more than just Diesel.....wouldn't fit!

Thanks a bunch for the link to Cruiserparts, mattafact! Glad to see some evidence that it is still available! I was shocked when my search resulted in nothing here and on google, but the picture on their site confirms we are looking at the same cap shown above. If anyone has ever seen a different cap used, fitting my original description, than above please share and include a pic if possible. Otherwise, if I don't find the cap today when I ride by the station/area again, I now know where to get one! Thanks and

Estancio said:
Cannot help but am extending great sympathy to you. Lost mine the same way several years ago, but was 2 states away when I realized it. Called friends and asked them to check the gas station where I left it atop the pump. No luck. GOOD LUCK finding a perfect replacement!
Click to expand...


Sorry to hear about your loss, Estancio!

So what did you end up doing for a replacement?? I was very surprised my search of MUD yielded no results as I am POSITIVE I'm not the first person this has happened to! Am I the first to admit it? Or just the first to make a big deal about finding an original "Diesel" replacement cap?

For anyone that cares, the temporary replacement that I found at Autozone (that seems to work just fine, BTW) is a CST brand, part #: 6806. Can't beat the price at only $4.99....might not hurt to have one in the spares box in the event you find yourself in my shoes one day, going to fill up only to realize it's GONE!
1982 HJ47 - RHD

Location
Always on the Run

yeah i bought a new one form cruiserparts.net couple years ago. Goo dluck with the customer service though.

IIRC that cap in the picture was 10-15 bucks through CDan/Onur.... And I can tell you the service is waaaaay better

If you want I will look at my invoice when I get home and see if it is the same part number.

That would be awesome, thanks! You know, I considered the CDan option, but he can rarely find or obtain parts that were never used on U.S.-bound cruisers. Parts for vehicles sold in markets outside the U.S. eclusively simply don't even exist in his catalog, from what I understand....so seeing as how Toyota never sold diesel-powered vehicles in the U.S., I figured he wouldn't be able to help me.....
1982 HJ47 - RHD

I know my truck is basically the same minus the 1HDT but Dan can get quite a few things for not having that motor in the states. He can't look up p/n for me so I look them up myself and it usually shows up in his system.

Gotcha. Yeah, I have figured out that I need to call him armed with P/N's....sometimes he shows something, sometimes he doesn't. Great guy to work with, regardless, everytime I have spoken to him.

Roberto said:
yeah i bought a new one form cruiserparts.net couple years ago. Goo dluck with the customer service though.


Is their service bad? I've never used them.
IG: asamattafact

mattafact said:
Is their service bad? I've never used them.
Click to expand...


If you send them an email inquiring about parts don't hold your beath waiting for a reply..... It took a month or so to reply to me.

But the number you posted comes back as (below) and it shows up in the US system and is prob around 12 bucks.
Toyota Part 77310-12100
OEM Toyota CAP ASSY, FUEL TANK

Sorry I don't have the EPC on my laptop or else I would cross reference for ya.

But the number you posted comes back as (below) and it shows up in the US system and is prob around 12 bucks.
Toyota Part 77310-12100
OEM Toyota CAP ASSY, FUEL TANK
Click to expand...


Both are legit numbers and still available.

Wow! So things have gotten quite interesting! Thanks for the info BCR and beno! And before I read Henry's reply, I was gonna ask Onur, since he physically HAS the 77310-12100, what it looked like compared to the other number we had been hearing about (and saw pictured above), 77310-35061. But now Henry brings up even more numbers and says the 77310-35061 doesn't ft his 47! So is there a difference in the caps used by the older diesel cruisers, vs. the newer ones? Is that the difference between the 2 part numbers we have been discussing? If so, it would make sense....Henry said the 77310-35061 didn't fit his 47 and Toyodiy lists 77310-12100 for my 47. But are there more than 2 different options? What are all those other numbers Henry listed?

I think I'm gonna call dibs on the 77310-12100 Onur has in stock, though I am VERY curious if it looks identical to the picture above. A picture, if different, would be AWESOME....mind checking Onur? And what is the deal with the 3 add'l numbers Henry added to the mix??
1982 HJ47 - RHD

By the way....thanks for all the heads ups and warnings about Cruiserparts.net -

Diesel Fuel Grades - Which Do you Use/Prefer ?
2 3