I'm not going to make it today. I picked up a stomach bug last night. I will plan on being there next Sunday.

I may be able to do the 8th. I am working on moving some stuff around so I can do an all day, if not I may be only half day, right now I am good 8 - 3ish. ( Home by 5 to decorate tree and put up Christmas decorations. )

I am not fully equipped for a snow run. (no radio, no chains). I do have a winch and straps though.
If you just need an extra body I can do that as well.

@Olorin
hey Jason, I forgot to write down that class name.
The website is ontrailtraining.com. Matt Balaz is the trainer that runs it. Awesome guy. Intro to recovery was the class I was talking about. I thought I knew a thing or two about using a winch- and as it turns out, a thing or two was all I knew. These guys teach you the other dozens of things. I highly recommend this for anyone in the club.

EricG said:
I saw a wrecker heading up around 2:40 near the sledding hill.
Click to expand...

There was a SUV which died on RR Road and they couldn't get it to run. Wrecker came to haul it to a shop.

Is OK, we'll pair you with another who has the bits that you don't. Mostly just need trucks/drivers (in pairs) to provide coverage from south to north. If there is a "deep" recovery, we can shuffle to get the most experienced/most equipped on the task.

Saturday was busy! Lots of people on the mountain. Surprisingly, lots of snow the farther north one went.

We had six rigs, so paired up and covered north sector, central sector, and south sector.

First recovery was a 2WD Toyota pickup stuck on 325, where coincidentally, he was blocked from going further east by a Honda Ridgeline which was 90* stuck in the middle of the road (and abandoned--no driver/owner in sight).

Used the trax (Tred Pro) to get this Toyota going. We had to wait a while on the Honda (FS called Sheriff, who got contact with owner).

Up north, on 351, Sam and David strapped someone up a hill.

Mid-day, we got a call that a vehicle was stuck deep on 327. Kevin, Sam, and I drove 3/4 the way up and found where the stuck had been, and vehicle tracks went no further up. We decided to run to the top, which we did without problem.

Around 3pm, after the owner arrived, Vic and Bill pulled that Honda out.

When we left, Sam and I took 320/Mount Herman, and Bill and Vic took Woodland Park, they apparently got two additional recoveries! 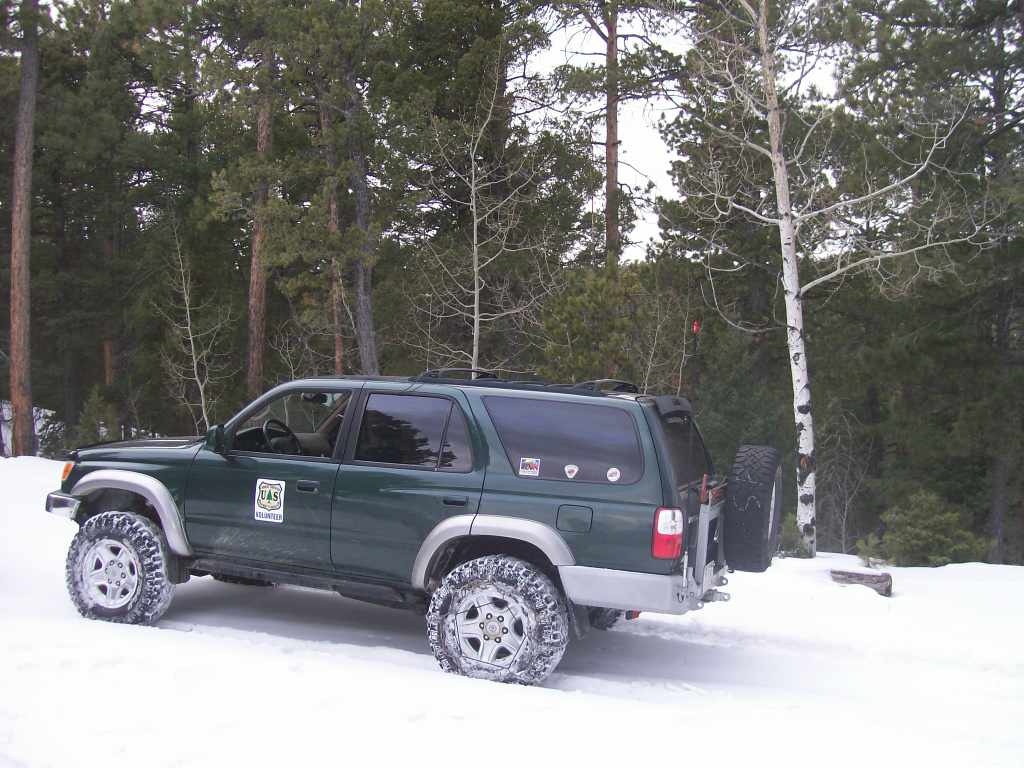 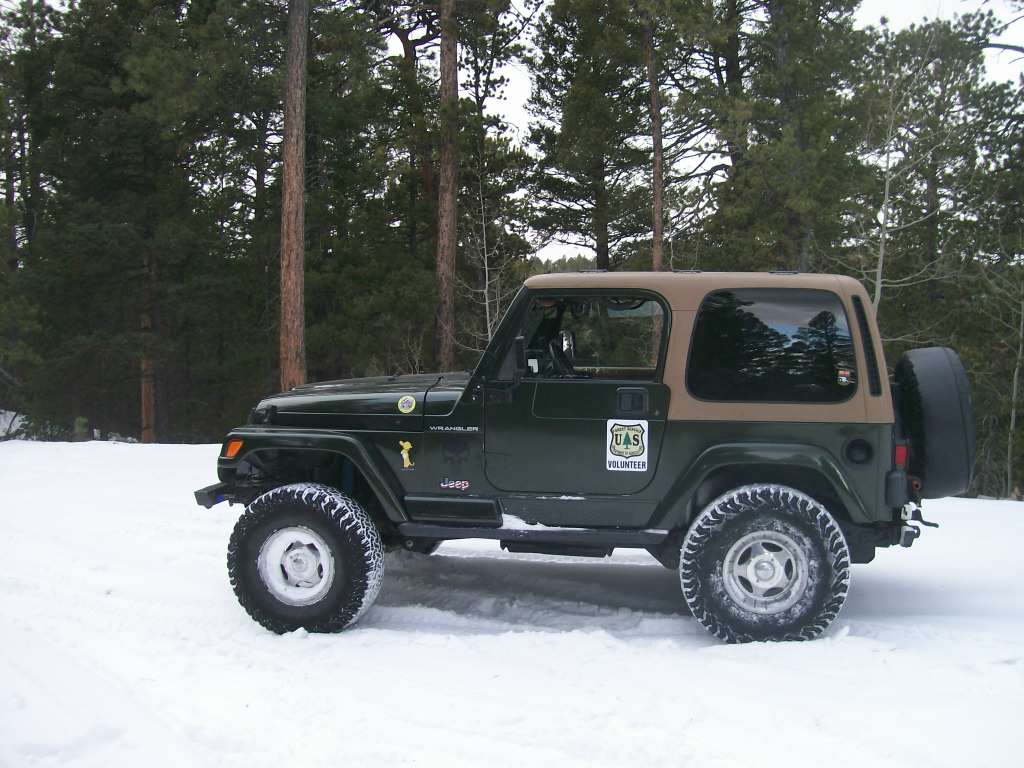 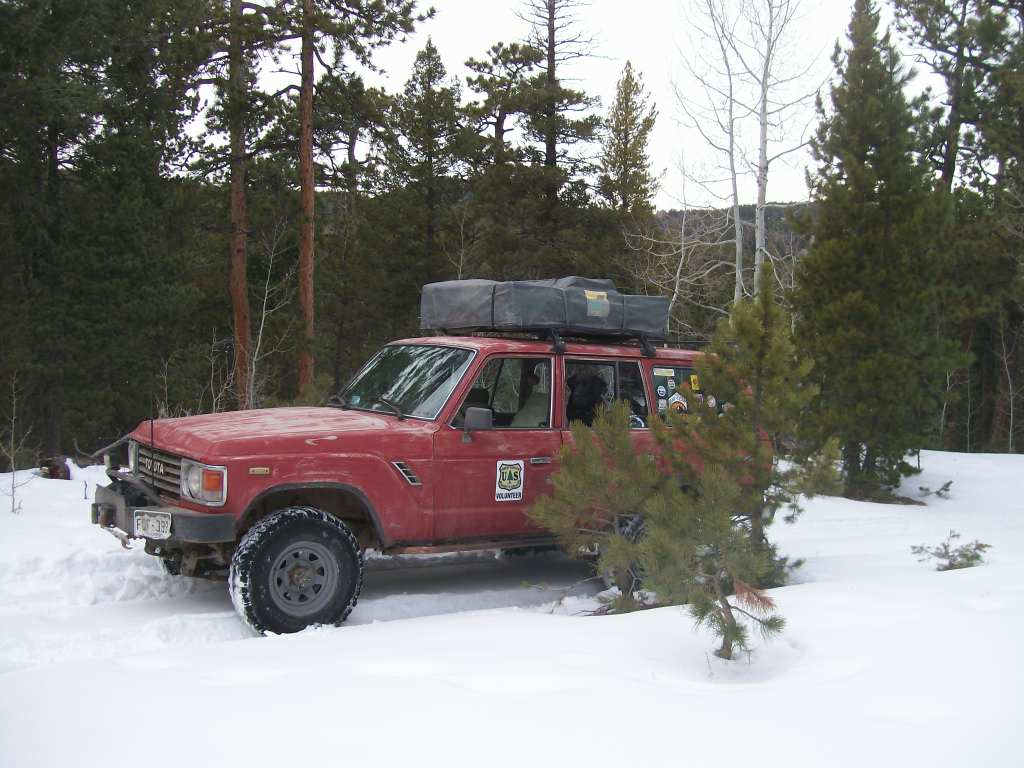 Those last two recoveries were after dark on road 314. Jeff did a masterful job pulling out a family in a Jeep Commander(?) that had no front tow hooks or anything else to hook onto. Jeff towed him out with him in reverse. It was a two wheel drive Jeep. My -40 lost all power to the wheels, so we put my chains on Bill's -40 and he towed me out of 314 and down to the FS work center where I left it overnight. I bought Bill a large pizza to express my appreciation. I trailered the Cruiser home yesterday. It puked out a large quantity of gear oil, probably from the TC but I couldn't see exactly where because of my skid plate. I won't be driving it this next weekend but I might post up and see who I might be able to ride with.

I think I heard somebody with the club on the radio Sunday afternoon from N. Powers area. Could just make out scraps of conversation, and heard some road numbers (325, etc.). Don't think you heard me calling back.

SAS said:
There was a SUV which died on RR Road and they couldn't get it to run. Wrecker came to haul it to a shop.
Click to expand...

There was a SUV wrapped around a tree on RR road around that time when we were heading out of the area. Looked like a hard hit.

Had a good time cutting down a monster tree. Still planning to volunteer next Sunday. 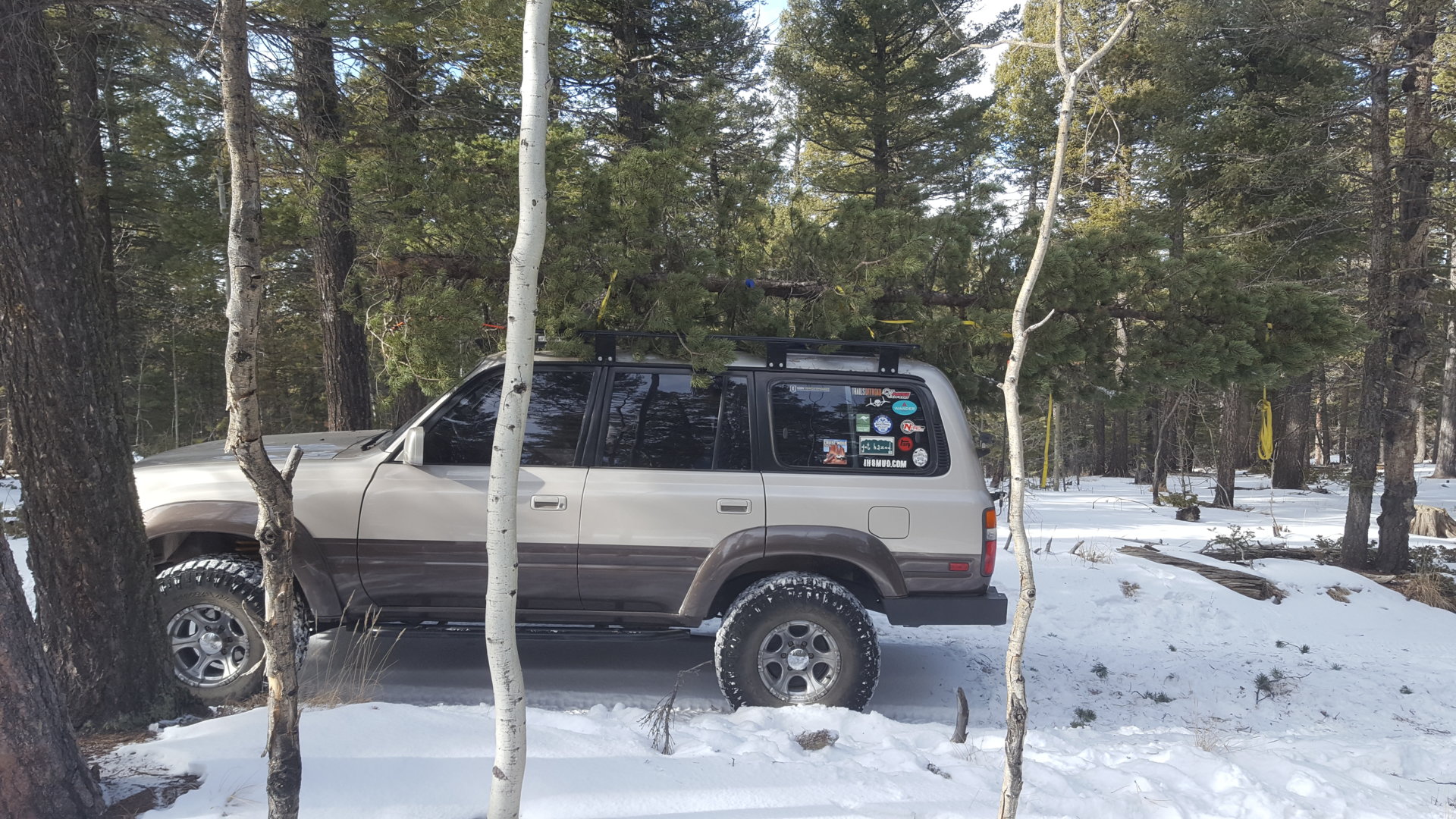 EricG said:
I think I heard somebody with the club on the radio Sunday afternoon from N. Powers area. Could just make out scraps of conversation, and heard some road numbers (325, etc.). Don't think you heard me calling back.
Click to expand...

Im betting that was me. I was the only one with a 50 watt mobile. I did hear a call back, but was having trouble making anything out through the static. My external speaker quit, and my main radio body with its speaker is under the seat. Makes it a little hard to hear.
We had a great day running trails. I was teamed up with Jason (Olorin) again this year. We ran the North end. Oddly, we thought there was less snow up North. We ran a set of tracks that ran way deep into 300C, through some really tight trees. I was certain we would find a vehicle down there. Judging by the track width and small highway tire tread pattern, it had to be a car of some sort. They got back far enough that you could tell they high centered, struggled to get turned around, but got out. They were pretty bold to go as far as they did.
We ran 327, and saw all of the spots people had struggled in. It was pretty deep out there. Sugar snow. Had a good time driving out of that one.
Then we ran 351, and ran into an agitated older gentleman in a four door, long bed 4x4, who was trying to get turned around. He was attempting to get back up 351. I’m guessing he wasn’t having much luck. It was very icy. He was asking us if he would be better off going out Rainbow Falls. I confirmed that, and he took off with us following to make sure he got down the shelf road ok. Pretty funny watching a truck that long get a rear tire off the ground, as the front went into a hole going down an obstacle.
We got to play with Jason’s 200 and it’s traction control while getting back up 351. It was pretty neat to watch the braking do it’s thing. The 200 is a heavy girl, and was trying to climb two ledges at once. That made for a tough climb. With a calculated bump, and some different line choices, we found the right combination to get it up.
We checked 300C on the way out, and someone had broken our snow dam, so we drove to the end again. Nobody there. Finished with 325. All was clear.
Not much action, but a great day for trail riding.

@black95
Thanks again! It was a fun day. I didn't think to lock my center differential when we were doing that double rock ledge, I wonder if that would have made much difference. I'm still trying to learn the systems and how to make them do what you want them to. And thanks for the website, I'll check it out and look forward to trying out a class.

I'll be out again tomorrow, this time my father in law is coming with me and I have a friend from work with a Tacoma who wants to tag along, so count us in for two vehicles.
P

I'll be there Sunday 9th

SAS said:
Is OK, we'll pair you with another who has the bits that you don't. Mostly just need trucks/drivers (in pairs) to provide coverage from south to north. If there is a "deep" recovery, we can shuffle to get the most experienced/most equipped on the task.
Click to expand...

@SAS
Sounds good See you tomorrow at Crystola gas station. Looking forward to it. (this also gave me a good excuse to pick up some tracks.)

Sorry everyone, something came up and I’m out Today.

000doodie000 said:
this also gave me a good excuse to pick up some tracks
Click to expand...

And we got to use them, too!

It was a fun day. Matt and I teamed up for the south side. There weren't a lot of people out deep on the trails. We came across a guy in a pickup truck trying to strap pull a Jeep Grand Cherokee from down a pretty steep embankment on 946 that was just slushy sandy loam. A nice out of state couple had wandered down there in search of a good tree and were facing downhill but once there couldn't get turned around and had no hope of getting up. The truck couldn't get any traction to actually pull him up the slope, but winching worked a charm.

Luke had warned us about the glacier on 315, which I saw last year. It looked pretty bad again this year, with signs of at least one other vehicle nearly getting pulled down the slope with a track running really near the edge, then finally getting out (possibly winching? not sure). We decided to tackle it with traction boards which worked really well. We laid out a track just to the side of the rock and then angled the boards uphill to prevent any sliding towards the edge. With those laid out it was easily passed. 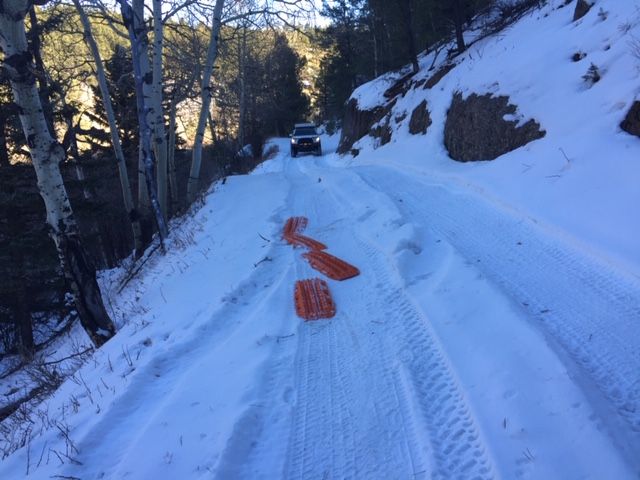 Today (Sunday) was the last day. @Springs505 had to drop out late, and @Stokes had a mechanical problem when driving to WP in the morning. @Steveandstuff , @EricG , and @Pops were present but I figured another truck would make even teams so I headed up Mount Herman, arriving about 1030am.
Traffic was steady but light compared to Saturday (8th), and really light compared to the prior Saturday (1st). Today must have brought out the cautious drivers, too, since we had no extractions/recoveries today.
Rick expressed his gratitude to the club for supporting the event again this year. He also said he would send us a reminder about the public hearing on proposed actions within the PPRD, tentative date is mid-January. 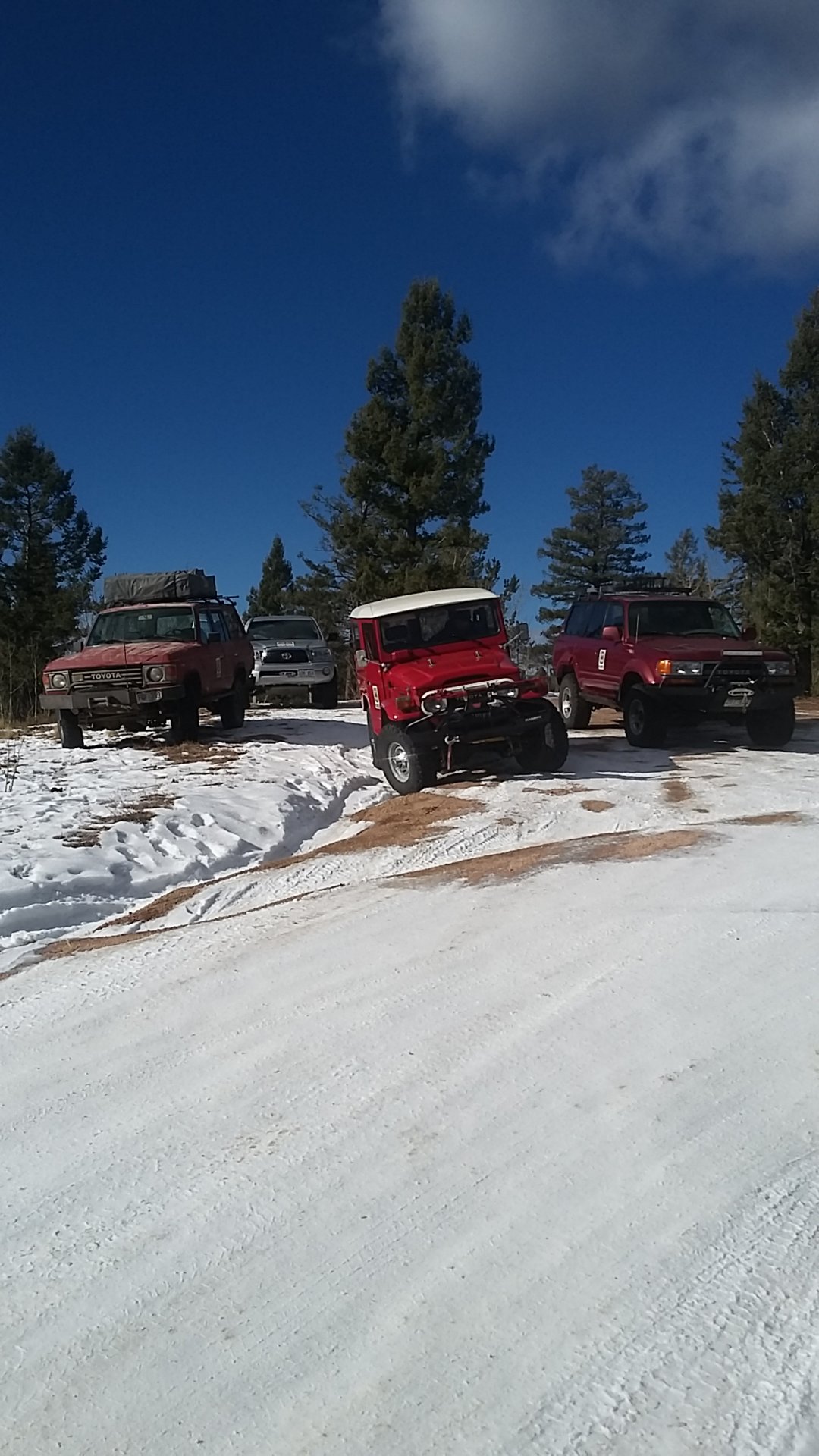 Looks like a good time! Wish I could have made it up at least one of the days, but worked both weekends...there is always next year right??

Family and I went searching for a trail with snow. We went to Slaughterhouse Gulch, which ended up being dry. The surprise of the day was getting to the top of a hill, and hearing Eric on the ham. I was able to have a clear conversation with him on simplex. I was pretty surprised by that. I could hear Doug too.
You must log in or register to reply here.
Share:
Facebook Twitter Reddit Pinterest Tumblr WhatsApp Email Link