Absolutely. Here you go. If it does every start to fall off, it's really easy to replace as I got a pretty big sheet of ABS for free at a local plastic supply place. It's the best solution I could come up with. 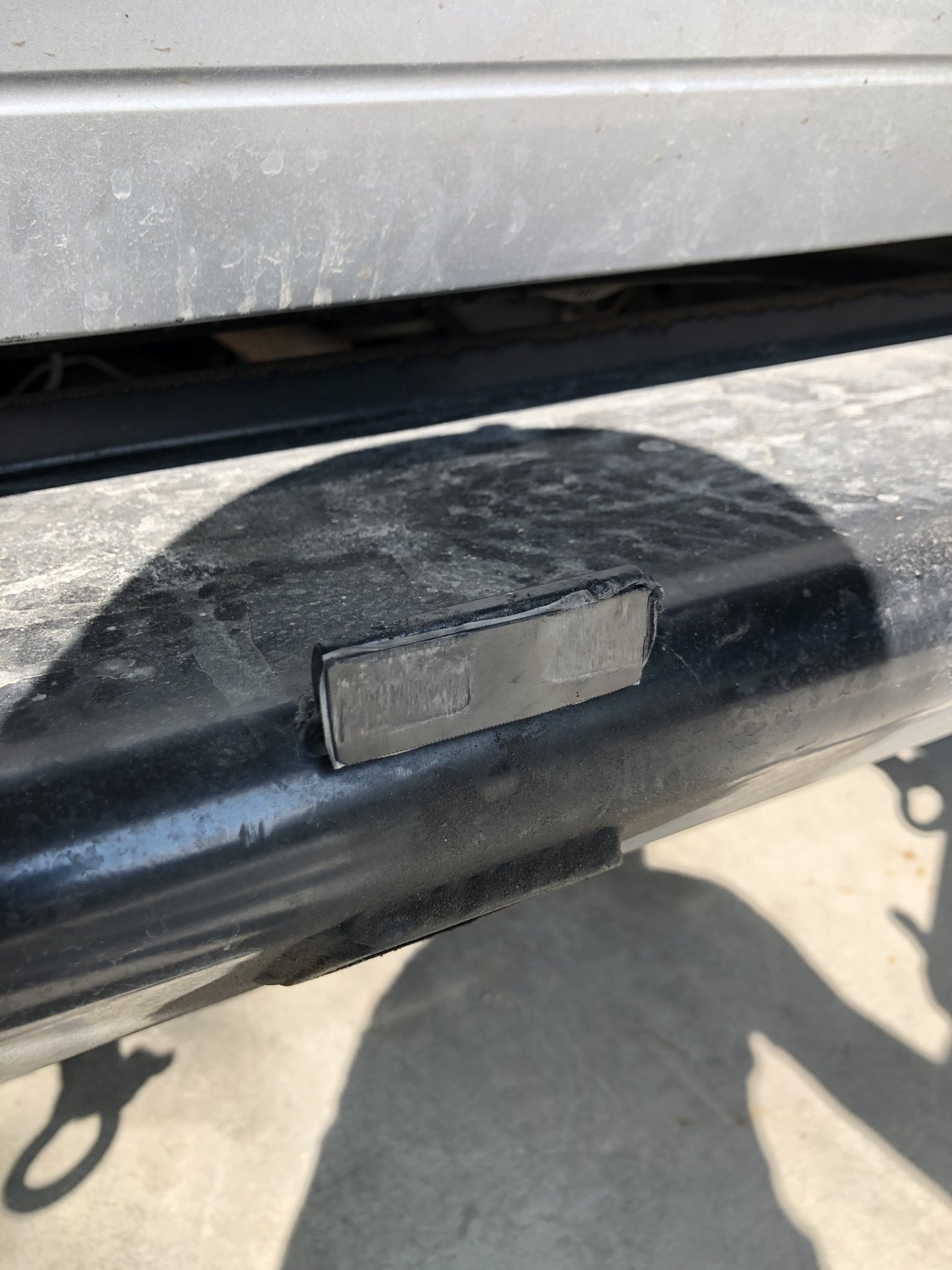 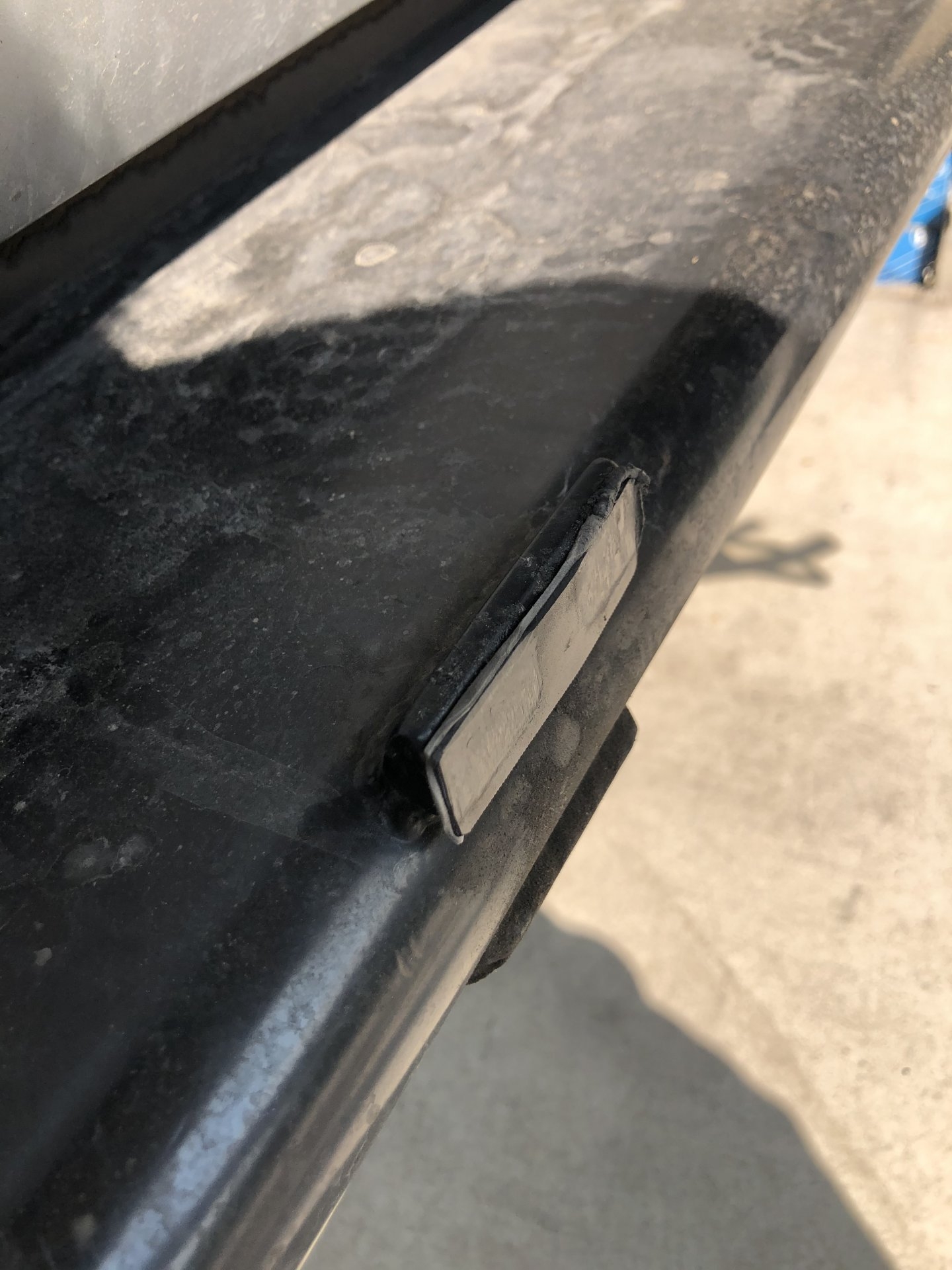 squheim72 said:
I saw an 80 series 4X4 Labs bumper that had something that I don’t know how to explain. It had a concaved dome piece under where the end of the arms meet. The tabs on the bottom of the arms that push against the stop slid over the concave piece and it helped hold the arms in place. I wish I had a picture. Would like to try the same with mine to decrease the rattle.
Click to expand...

Visit site
Well, it's been pretty slow going. Mostly due to the fact that the garage is right under my 2-year-old's bedroom. I can't run a grinder in there while he's sleeping, and I've... uh... needed to do a lot of grinding.

I welded the towing crossmember, guessets, receiver tube, and recovery points and stuck the assembly back on the truck so I could fit the side tubes and "trim pieces" as I'll call them. Started by fitting the end trim piece with the tabs and rounded part, making sure they were square to the top surface of the bumper and square to the front edge. Tacked in place, then tried fitting the other trim piece- the bent one with four sides shown below. I was hoping to have the bent edge fit against the bumper side wing, and have the other edge sit along the edge of the trim piece with tabs. The geometry just wasn't working for me though, and the best I could do is what you see below (shown after I tacked the side tubes). 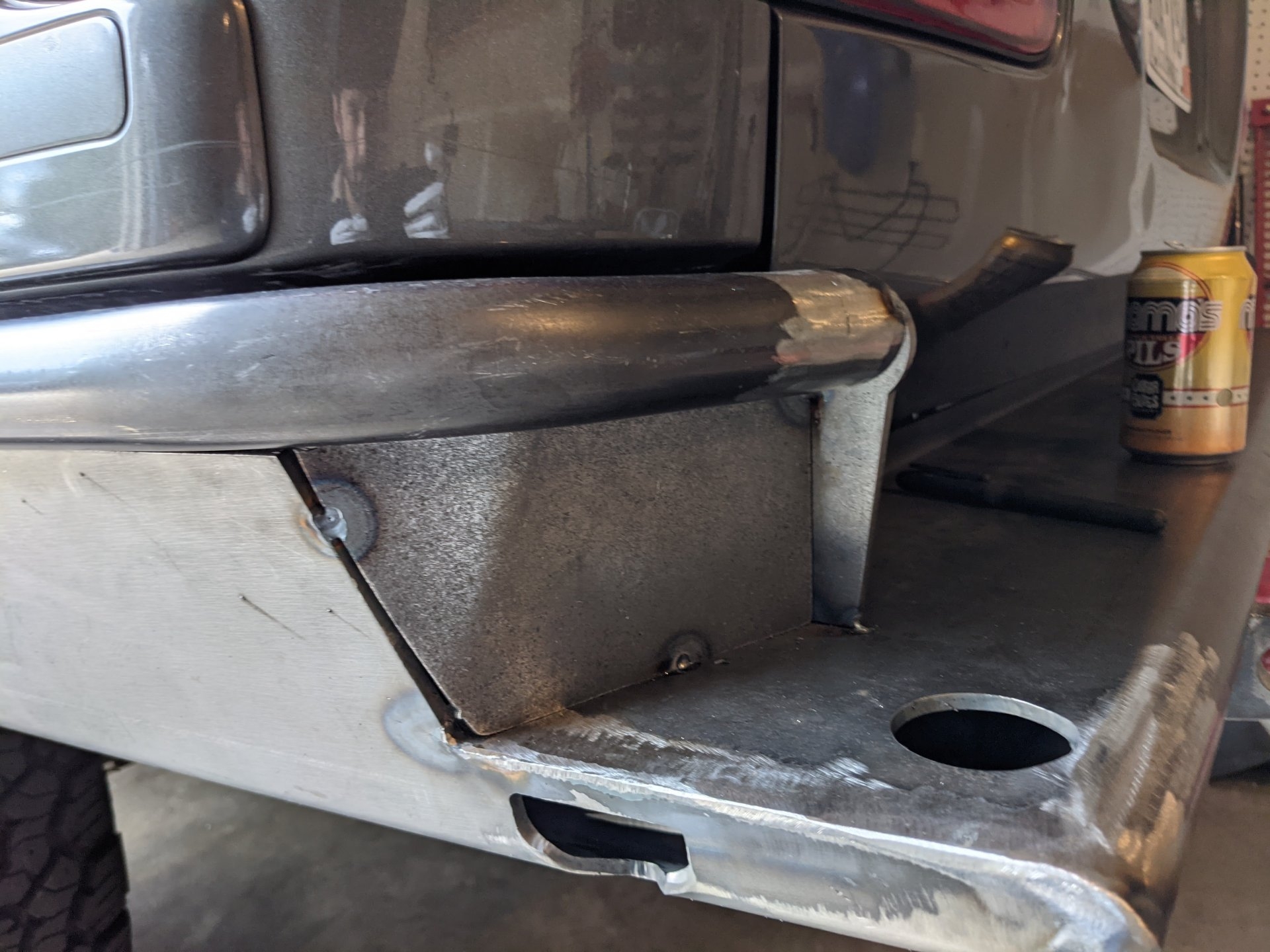 I figure I'll cut that end trim piece so it doesn't stick out, after I get a little further along. I was left with a little gap between the tube and the rear trim piece, but not so much I couldn't fill it at welding time. 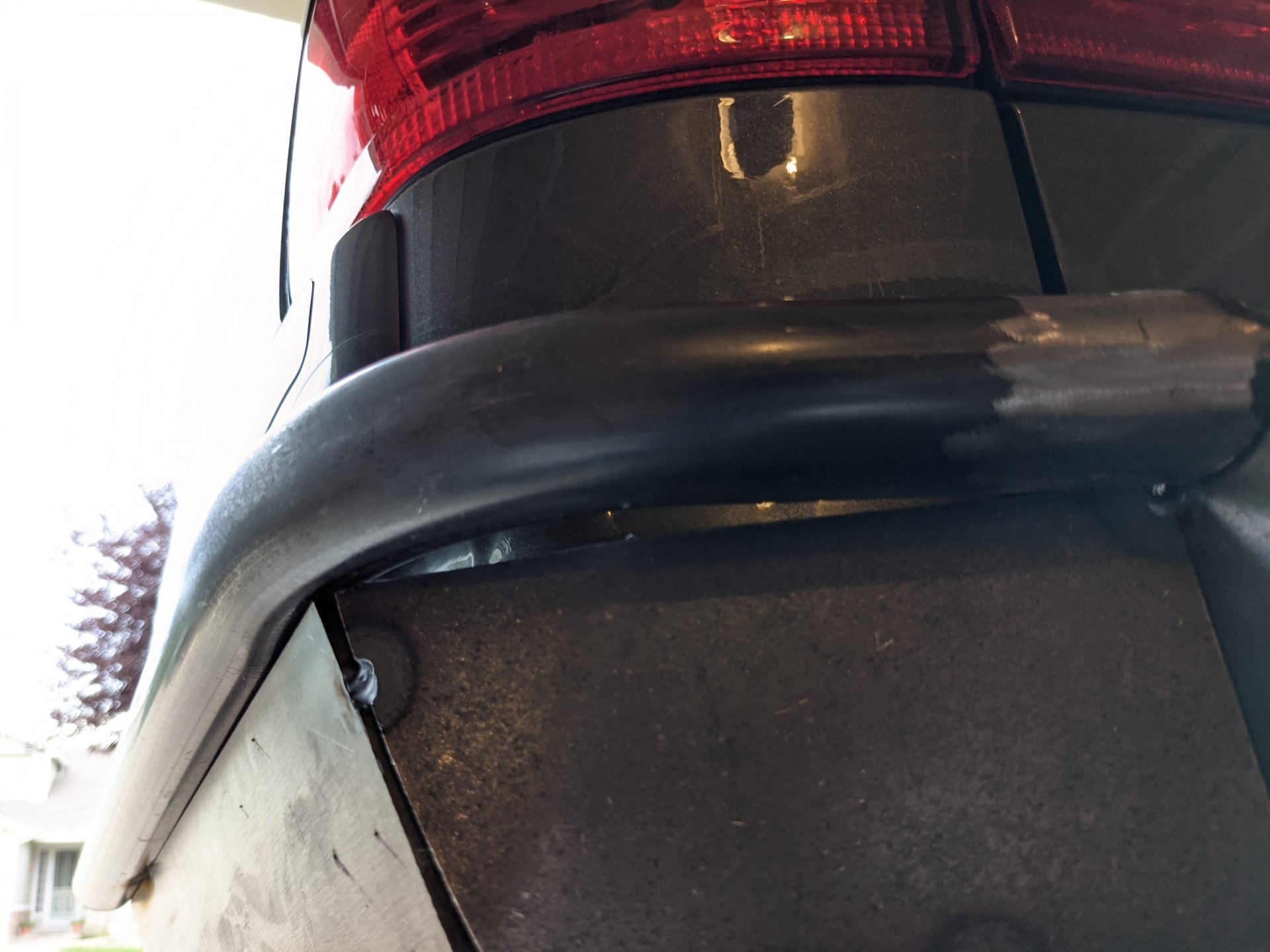 Cutting the side tubes was pretty straightforward, but I failed to measure/mark twice before I cut once. Ended up welding the tube back together and cutting it a second time. No real tips at this point other than make sure you leave a bit of space between the tube and the truck. Whether the tubes stick out for added protection or sit more flush for a cleaner look is a matter of personal taste, as far as I can tell.

At this point I decided to start assembly of the tire carrier. I hammered the sleeves into the swing arms, welded, and ground flush. Nothing exciting there. Same with the swing arm end caps. The wording for the actual tire carrier assembly was a bit confusing for me, but pictures seemed to clear everything up. There are two pieces- I'll call them the upright and the clover, with the upright being the part attached to the swingarm and the clover what the tire bolts to.

Tack the vertical piece of the upright to the piece which bolts to the swingarm. Make sure the upright is square. Then tack the gussets in place. I did my best to make the gussets use the full width of both pieces. I don't have any pictures of this, but its the same you can see in the official instructions or on the other threads. Positioning the mounting assembly on top of the vertical piece was a bit tedious. I ended up using a c-clamp to affix the side pieces to the upright for positioning. I also used a ~1/16" spacer between the clover tube and the top plate as suggested. It doesn't seem the front/rear positioning of these side plates relative to the vertical tube really matter. Just make it look good. 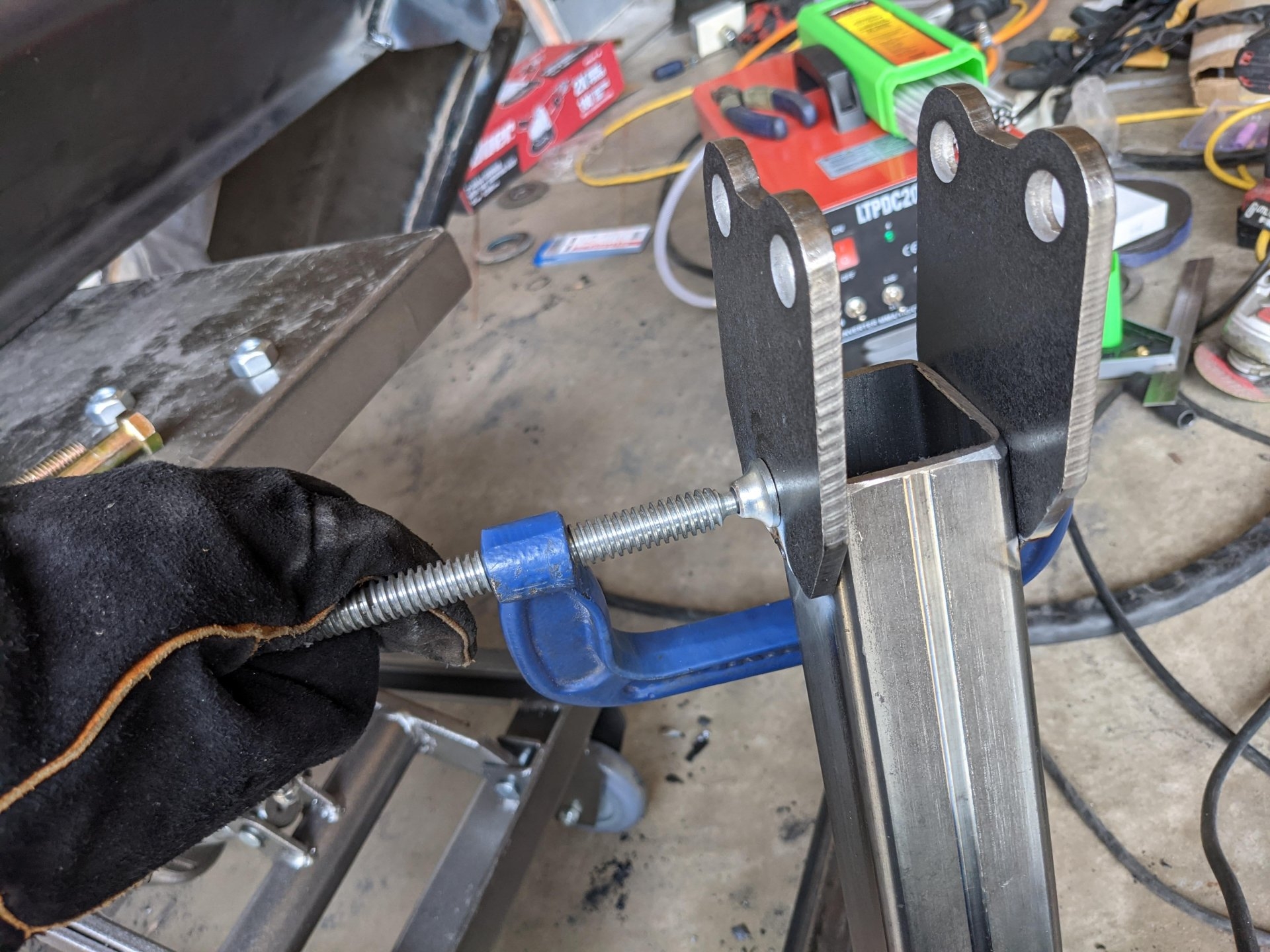 The clover assembly was simple enough I didn't take any pictures. Just mark the center of the clover and position the tube on it, keeping an eye on your rotational alignment so the "star" is pointing the way you want it when you're done.

That's about as far as I've gotten. Lot of welding, grinding, and welding again not shown. But my beads are starting to look a heck of a lot better than they did at first. I took the day off yesterday and bolted the unfinished bumper shell to the truck and took it to the trails. Rode it pretty hard and got warm and fuzzy every time I came off an obstacle that previously would have resulted in my rear end dragging. None of that now!

Visit site
I'm 99% done with the rear. Rather than document every little weld I've done, I'll just list a couple of pain points and tips. First, the swing arm stop needs to be mounted toward the rear edge of the bumper, with the corresponding stops on the swing arms on the trailing edge. Originally I had the stop like in the photo below, and you can see the damage on the tailgate when I carelessly lowered it the first time without thinking to check clearance. The good news is that so far the latch doesn't rattle or clunk at all. If that changes I'll add in some plastic to keep things tight. 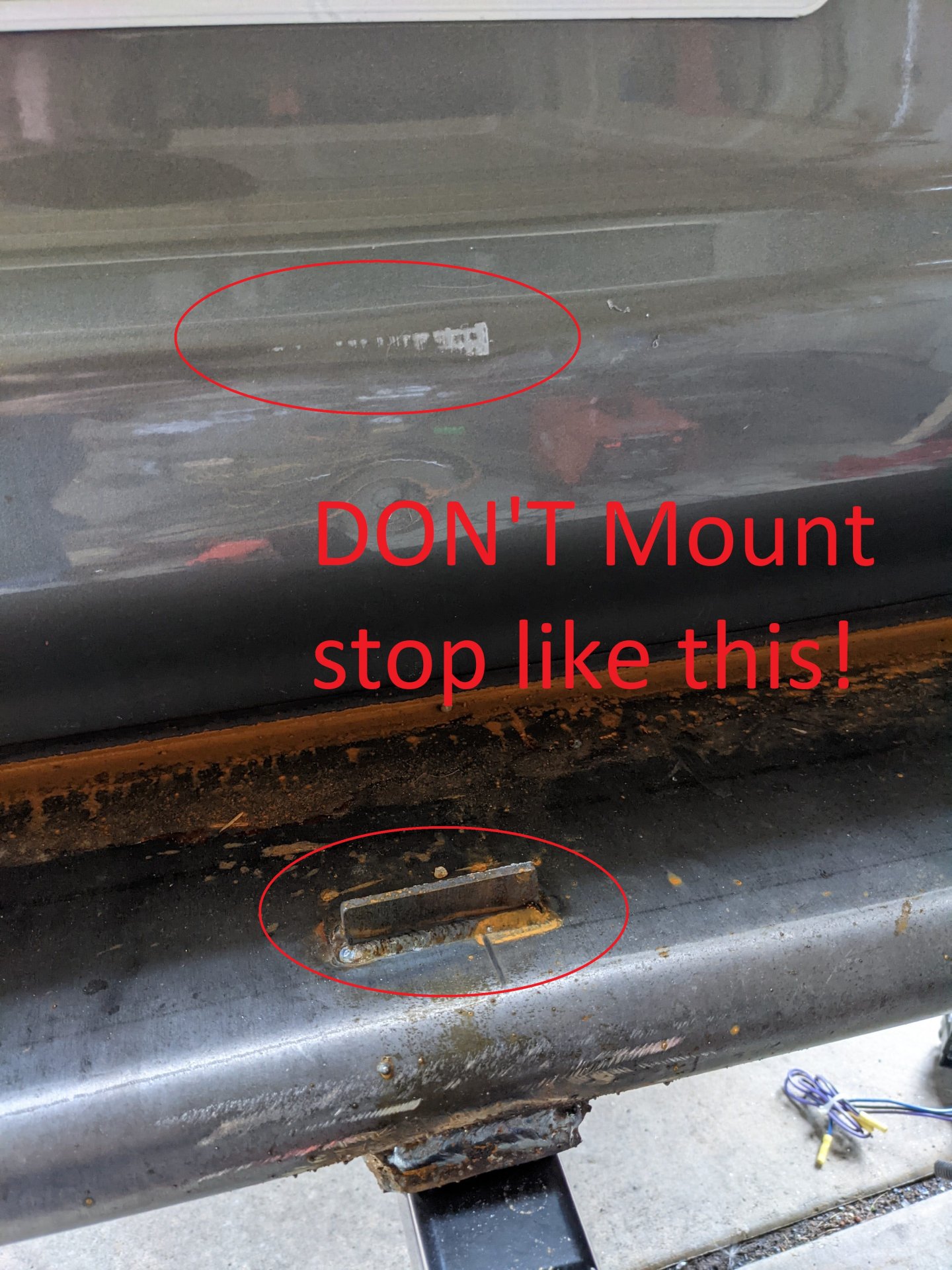 Originally I had planned to put the included antenna mount on the rear of the tire carrier, and attach the high-lift mount to the ladder. I was having a heck of a time getting the geometry right on the high-lift mount, so decided just to attach it to the rear of the tire carrier. The instructions say that's an option, after all. If I was running some super skinny tires, this might not be a problem. However, the plane of the jack passes pretty much through the center of my spare (285/75/16) as can be seen below. I'm going to get a short section of square tube and extend and angle the back, hopefully solving the problem. I think I'll put one antenna mount on the spindle and one on the roof rack for times when I need all the range I can get. 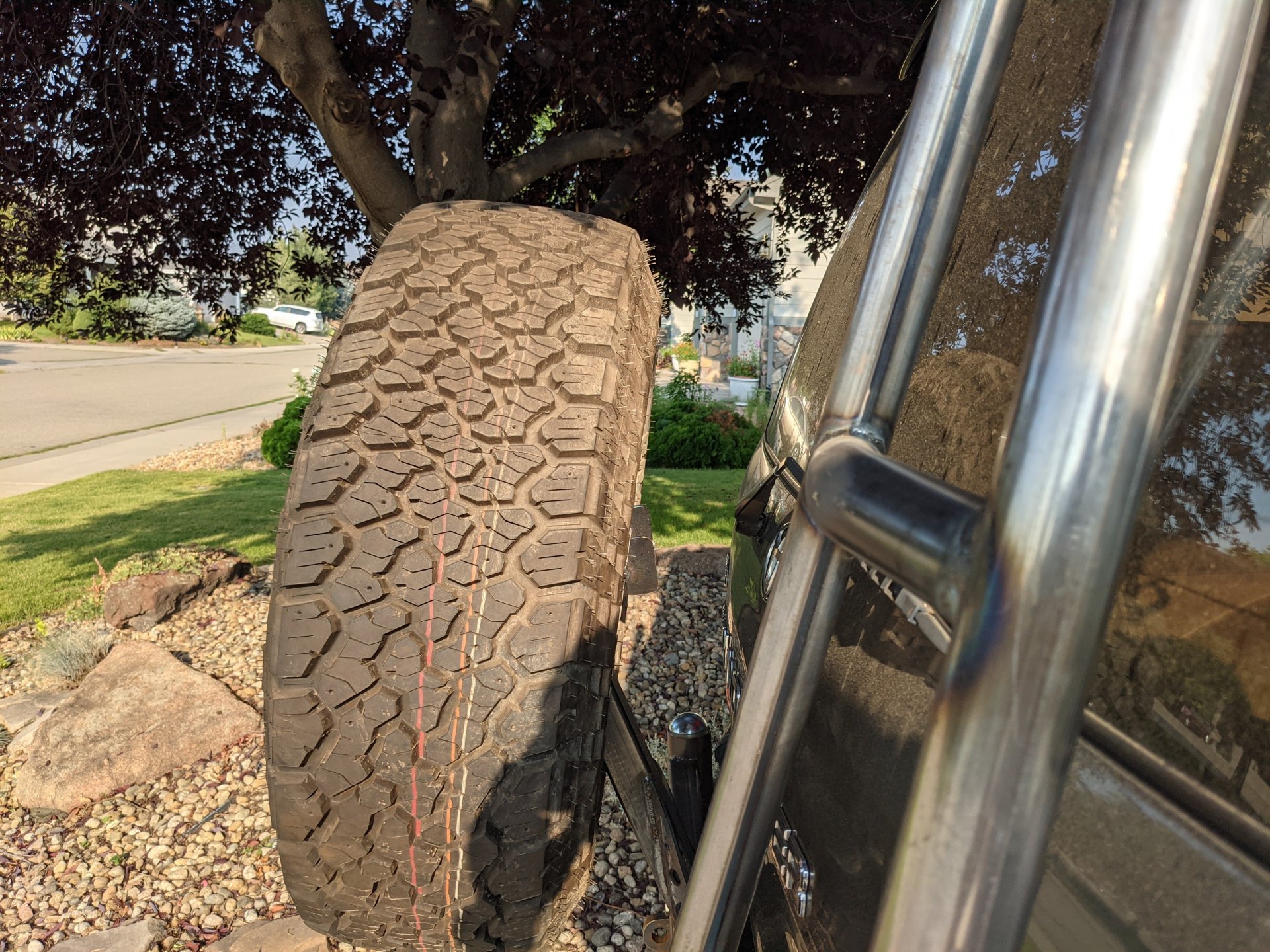 So all that's left is to fix the high-lift, attach antenna mounts and license plate bracket, and take it for powder coating! Overall I'm pretty happy with how things turned out. If it weren't for my sloppy welding at the start, I think this could have been tackled in a long weekend, either with two people for installing/removing the bumper, or with a hydraulic table. 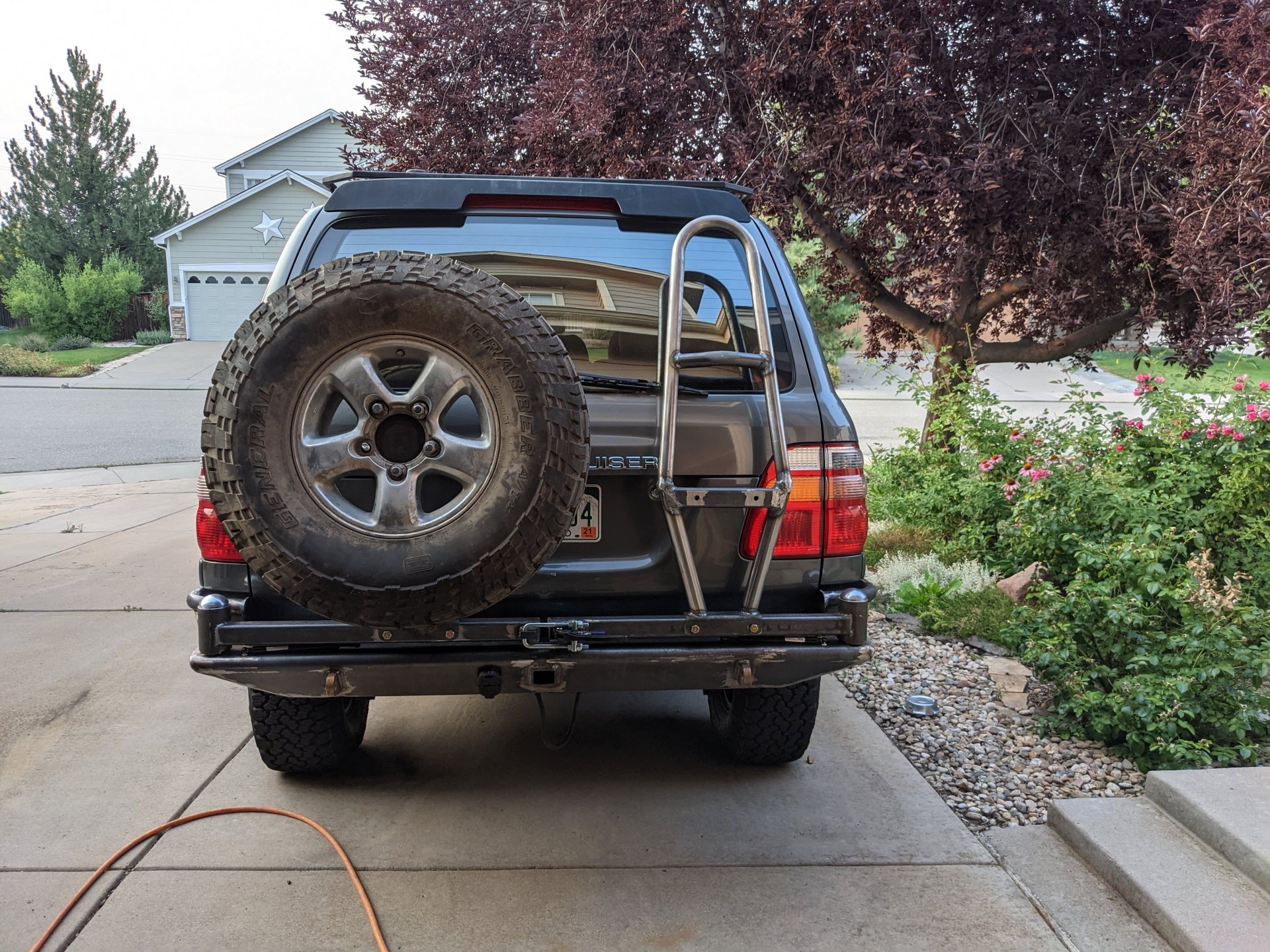 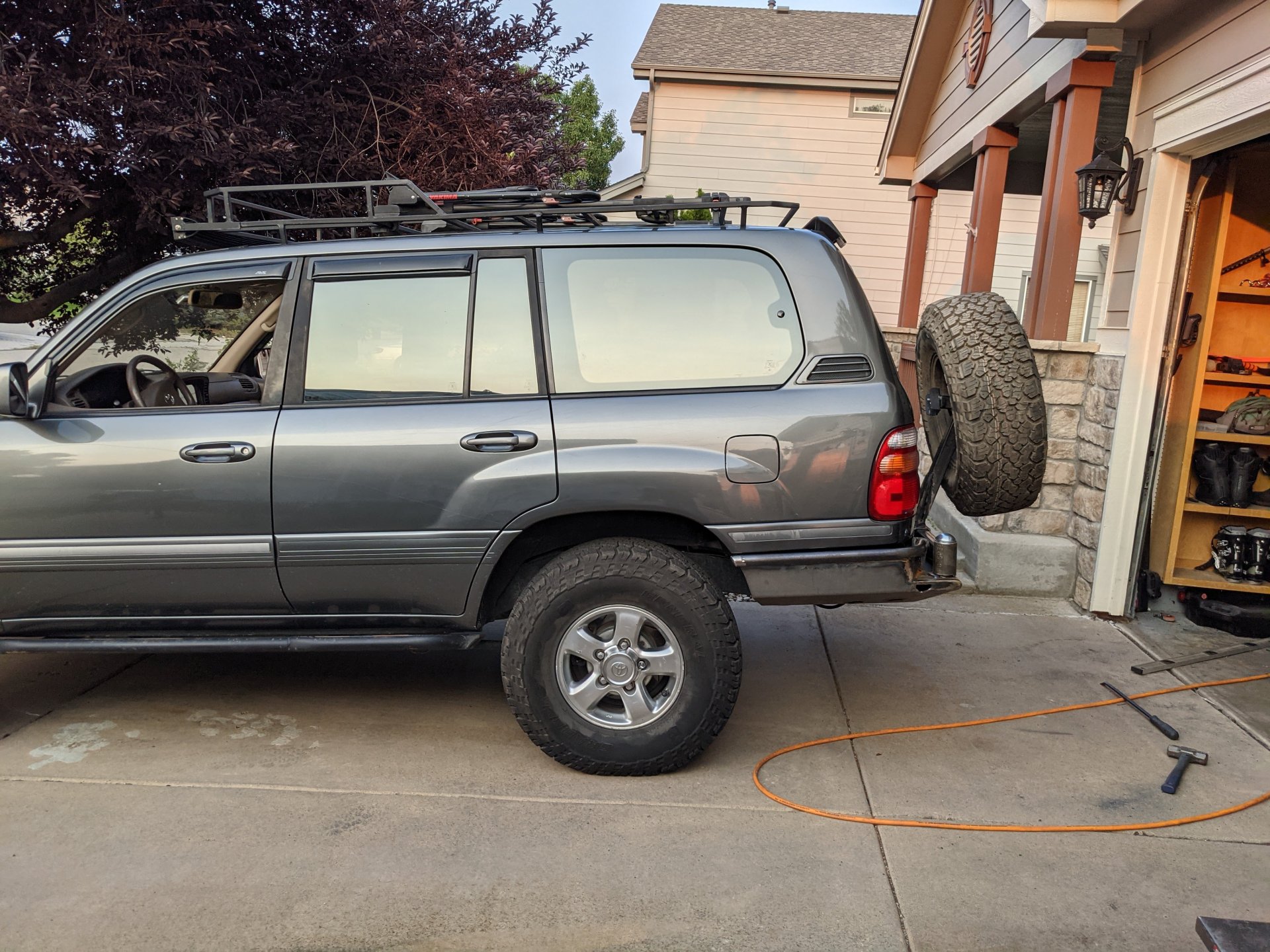 Now on to the front so I can make a single trip to the powder coater... 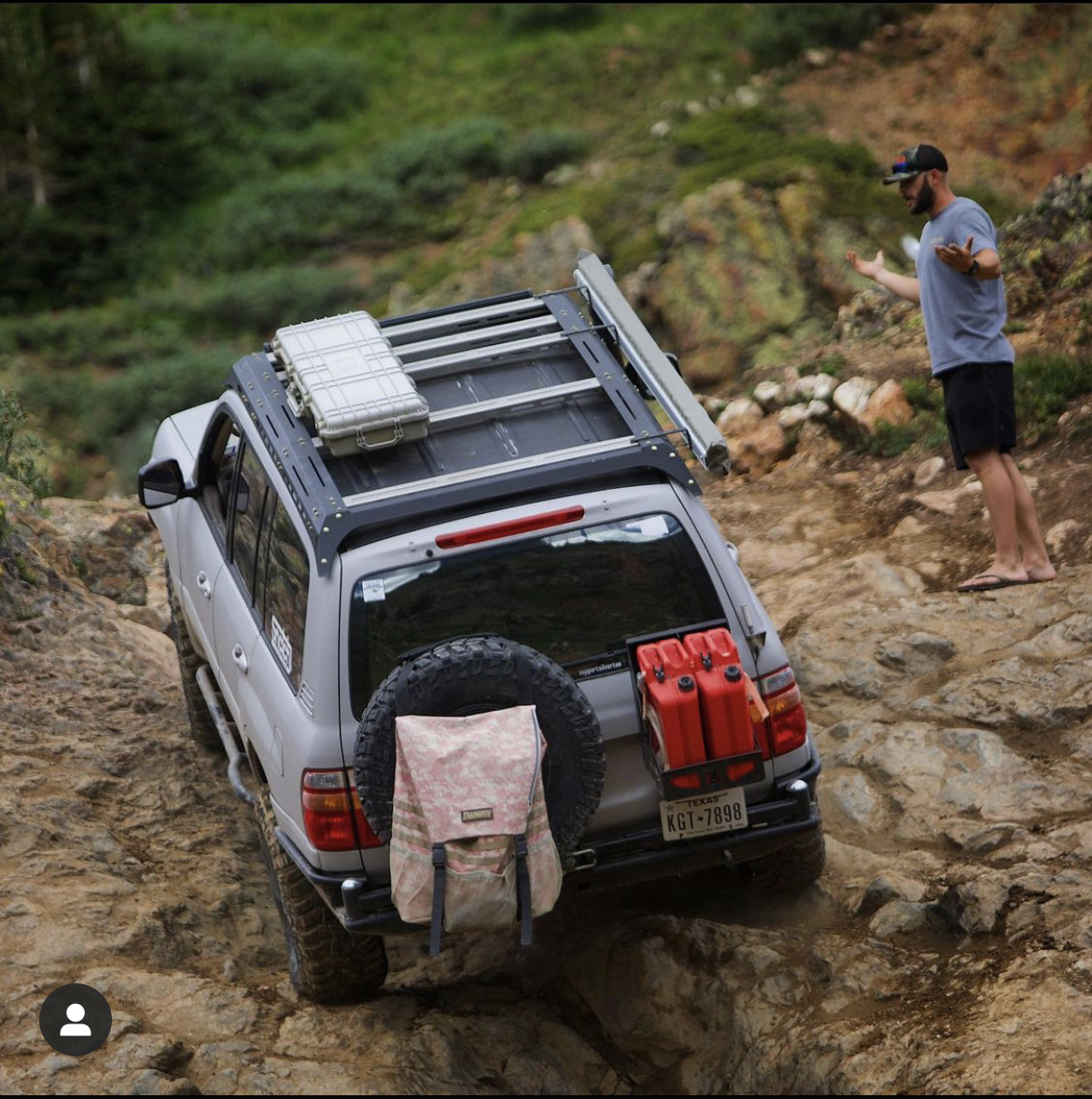 
Well, that makes me feel a bit better! I'm glad I caught it before taking it for powder. Still time to fix it. Do you just throw your high lift inside?

VagabondJesse said:
Well, that makes me feel a bit better! I'm glad I caught it before taking it for powder. Still time to fix it. Do you just throw your high lift inside?
Click to expand...

I actually ended up forgetting to do anything about it and didn't take a hi lift on my last trip. May just figure out a roof rack setup or swap to a bottle jack. Putting it inside seems a little too dangerous. That's one heavy javelin.

Visit site
I ended up not using the high lift mount provided. I'm not a big fan of hi-lifts for several reasons, but i was also able to slide the spare tire much closer to the tailgate without fear of the mount bouncing into the tailgate on rougher trails. i think closer to the truck puts less strain on the tire holder. maybe im overthinking it.

i just carry around the oem bottle jack and one of land cruiser phil's adapters. 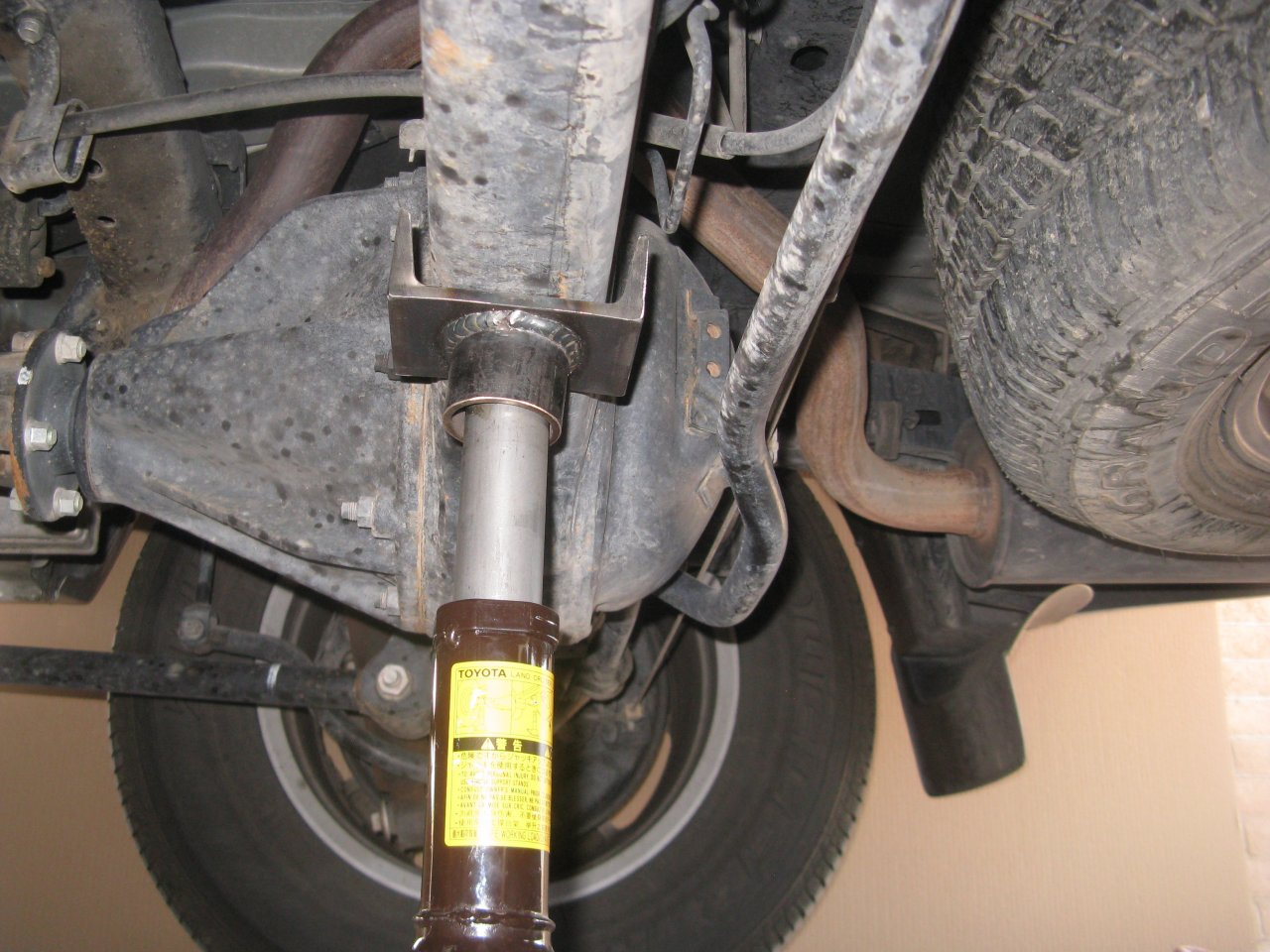 Tanner H said:
I ended up not using the high lift mount provided. I'm not a big fan of hi-lifts for several reasons, but i was also able to slide the spare tire much closer to the tailgate without fear of the mount bouncing into the tailgate on rougher trails. i think closer to the truck puts less strain on the tire holder. maybe im overthinking it.

i just carry around the oem bottle jack and one of land cruiser phil's adapters.

Yeah now that you say that, I slid the tire carrier arm all the way back as far as I could. It sits tight to the body but not tight enough that it would touch. Not that this affects your ability to get the hi lift on it, because it still doesn't work.
You must log in or register to reply here.