Old engine and three speed going out to fit 302 and five speed.

Where is the best/cheapest place in australia to get bell housing and the rest to match up the 302 to the toyota 5 speed? Any help would be great.

Any other tips for this conversion would be welcomed too.

Wouldn't Marks Off Road Adapters in Australia be the first logical place to inquire?????

Marks adaptors is the obvious place to go. But i would like to get at least one comparo.

A thread isn't any fun without pictures. This is a FJ40 from the Bakersfield area. The guy did a beautiful job on the conversion. Don't ask me any questions on adapters I was just impressed with the level of workmanship. 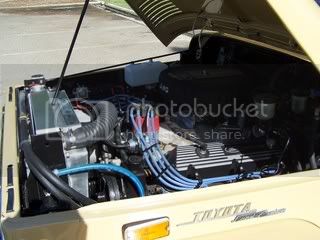 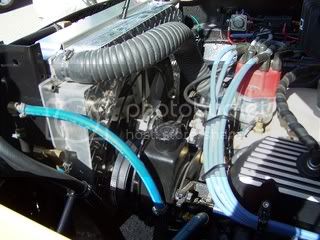 This photo is of the underside of my FJ40. The engine is blue. The original Toyota running gear, including its bellhousing, is black. The silver bellhousing is the Mark's adapter, which sandwiches between the engine and the stock bellhousing. The Toyota throwout fork and bearing are used, while the Mark's bellhousing holds the Chevy clutch and flywheel. There is a short splined shaft connecting the two.

It's not a cheap setup. The current small block Chevy kit, with all parts required, is in the $1300 USD range. But, there are no modifications needed other then welding scab plates onto the frame for the front motor mounts. In other words, you're not cutting up the Land Cruiser.

After many phone calls and inquiries... Marks 4x4 adaptors are by far the easiest and best option. all kits cost around $900 to $1000. Marks is $1100 but it bolts staright up with no messing around and no need to move or alter gearbox, transfer or drive shafts. Way easier than the rest.

Will let you know how it all fits in a month or so. The car has to be blasted, welded (there's a bit of rust) and painted first.

Thanks for all the suggestions