Hi there ! Here is a little story to further explain my thread title and where i’m heading. feel free to skip to the build directly.
Build should get underway soon.

I’ve been hooked on Landcruisers for over 25 years, got hooked when i crashed my brother’s BJ40 (thats just an epic story), moving on, .. Over the years i've redone my 42 twice, i parted about 8 rotten 40s, accumulated lots of parts and quite a few specimens for future builds. I stored a 40 project for about 15 years, waiting for the right moment (still waiting i guess), telling my wife i would make her one just for her, a nice pale blue… but that didn’t fly. Still a no go. More recently i came across a cheap 80 series and then found a better one that i fixed for camping and family fun.

Two years ago, i had the chance to find a tired 1977 fj45, i couldn’t let it pass! So without thinking and/or only with my Landcruiser brain, i bought it and brought it home. I parked it in the driveway, there was no space in the barn left.. My unicorn (thats how she called it) visually bothered my wife sitting there, so i moved it a bit away where it would get immersed in snow for the winter but still be accessible by the road if i made space for it, and there it sat, out of my mind and my wife’s view for that winter. Come spring it became obvious that it couldn’t sit there for ever, plus i started to receive offers for it, and guys stopping to have a look, and worst.. pressure to myself i wouldn’t let it rot there like to many of those old folks like i sometimes investigate them on their truck.

So, got it close to the barn again, in the driveway.. i convinced my wife it would move pretty quickly… But it didn’t, my 80 series needed attention, plus i had trip projects for it. Soon after that, i got excited on fixing a second 80 series for developing my welding skills and going on trips with a friend. At that time, i had 2x40s and an 80 in the barn, no space to work really and the 45 still outside. So there went my efforts, i parted a glazed 40 (that one is another story by itself) and then came a second winter. Out of pure luck, i managed to get a spot for the 45 at my neighbours, so there again it left my mind for a while. During winter, i daydream of other Landcruisers, my all time favorite is the 60 series, but never got a chance to grab one. Many years back i drove my brother’s 60 (yes after the 40 he got a 60 but i didn’t crash that one) and really got the thing for it. So there i was daydreaming and shopping, my wife wasn’t too excited about that. During that winter my wife tried to make me sell the 45, it needs lots of work, it’s too small for me to fit in (i’m 6 feet and pretty heavy) and we ..dont have the budget for a rebuilt. It all made sense of course, she’s right! I can’t drive this thing without opening the door to shift! But there was still something pulling me.

This spring i brought it back and there i needed to make a decision (it took a while). My boy started to build interest for it, started thinking about the possibilities and what it could become. My boy made a road trip across canada with me in my BJ42 when he was 6 years old, so he’s kinda on my side and thinking with a landcruiser brain too. My first rebuilt costed me 5 times what my second did. It’s a unicorn! come on ! Plus, i can stretch it ! I can make this happen ! So there it was, we had a project… All we had to do now was to sell the idea to my wife.
She was ok with it… it got me worried. Like she said, it made more sense fixing it than fixing another 80, i had lots of parts for some of it, way to many for others… (ohh i know where this is heading..). She accepted but with only one condition… i had to do it with a 100$ budget ! Meaning i needed to finance the endeavour with the over stock parts i’ve been collecting.


So there it is.. i'm starting a new build and i’d love to have your ideas, comments and experience to guide.

So..
Its a 1977 (dec. 76) FJ45 lwb.
I’m hoping to stretch the cab by about 6 inches without cutting the frame, although i’m still debating on the subject.
It needs to pass inspection afterwards and frame is ugly. So i plan on cutting the front of the box by the amount of the added cab.

I would like to do it with the 45 cab and top, without transforming a 40 top but i have extra ones.

I quickly photoshopped a 3, 6 and 12 inch stretch to see what it looked like, i don’t think a 12 inch is necessary and and would like to keep the stock design as much as possible. But adding inches to push the seats further makes dead angles, so i think i would have to add side windows.

To start with, here are the photoshoped images:

Here is the floor and cab/top i will need to rebuilt and stretch (yeah its rusty like hell, im canadian).
I need to rebuilt on location to avoid wrapping, right now the cab is well supported directly on the frame. 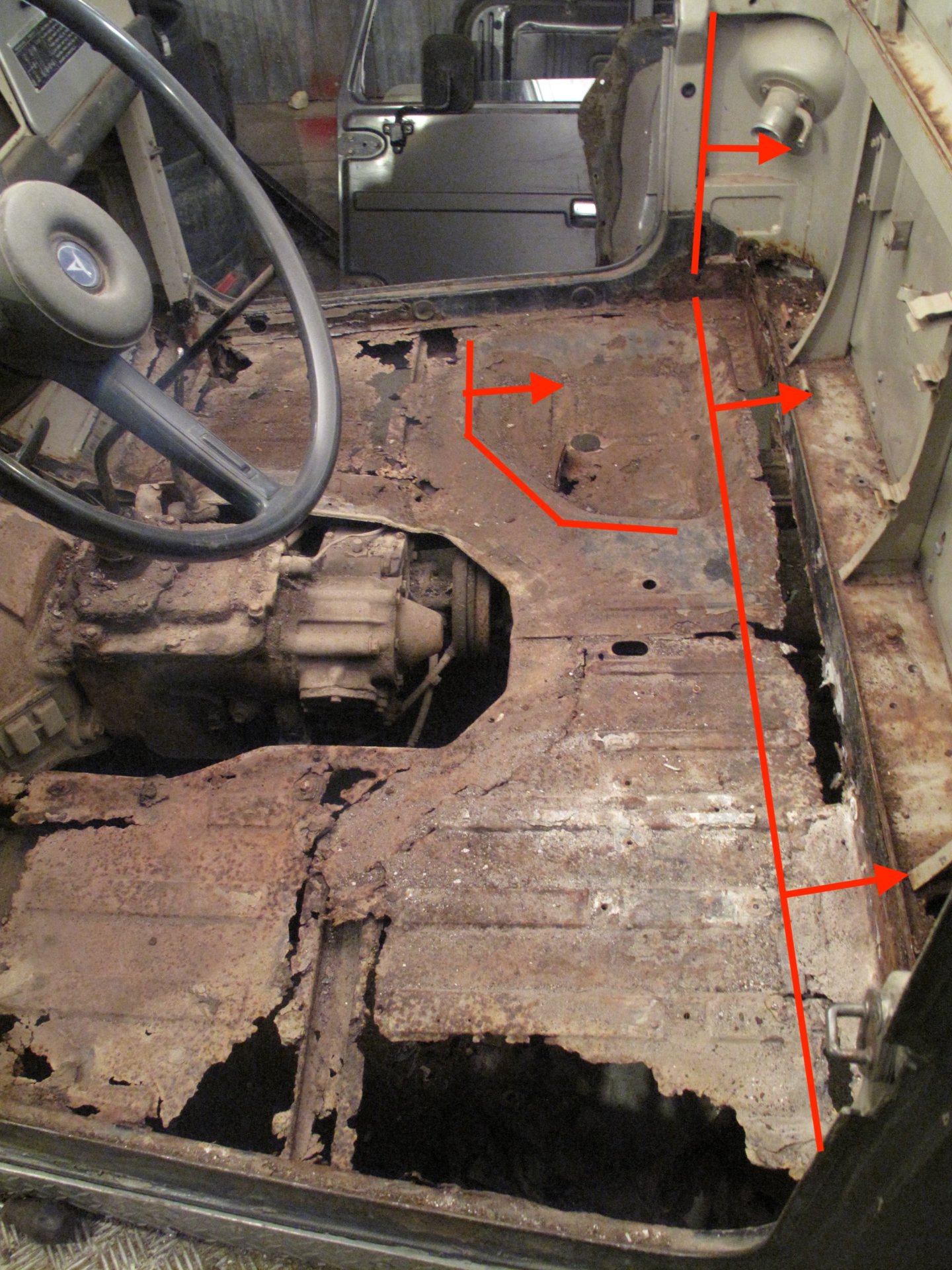 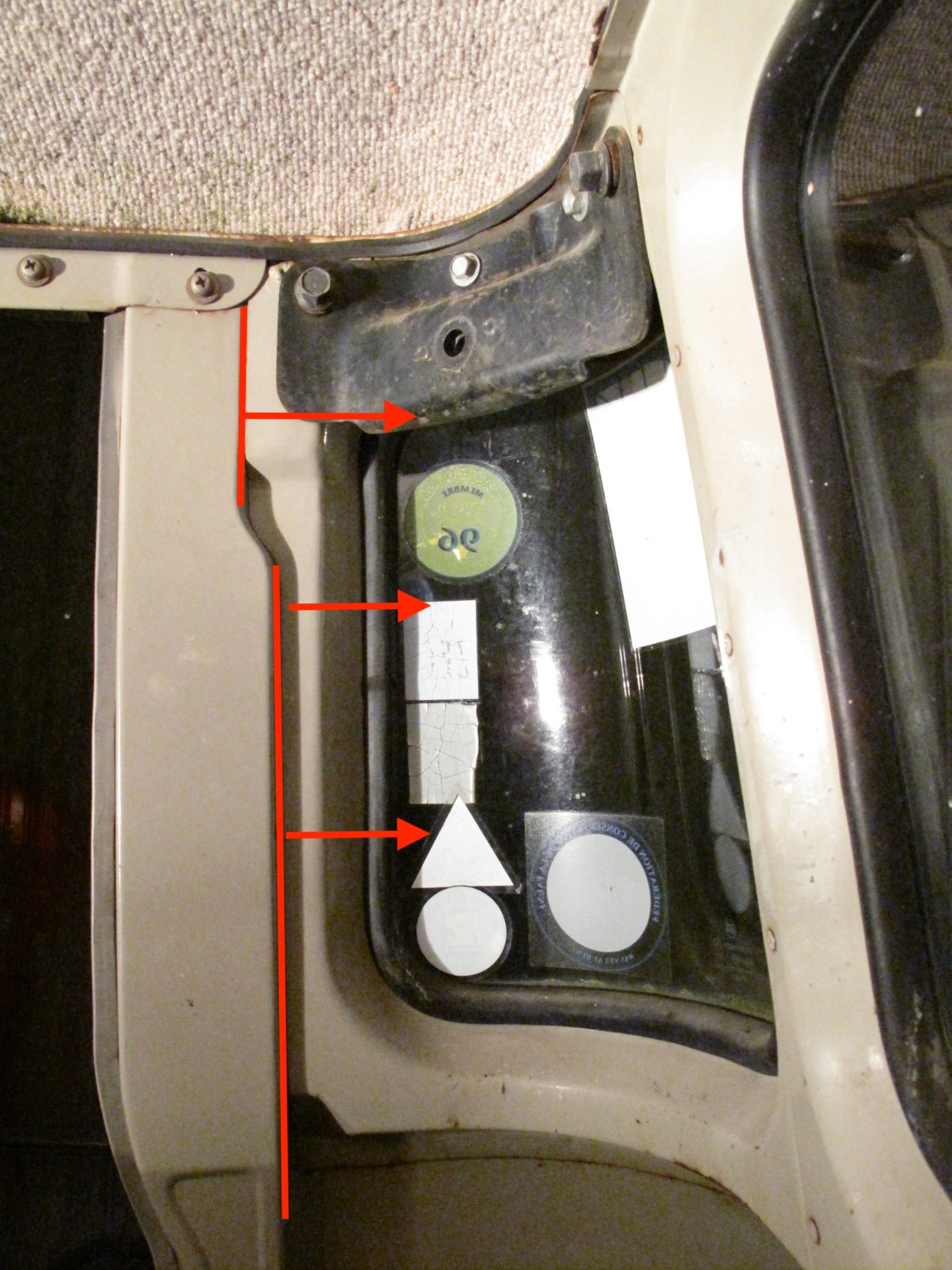 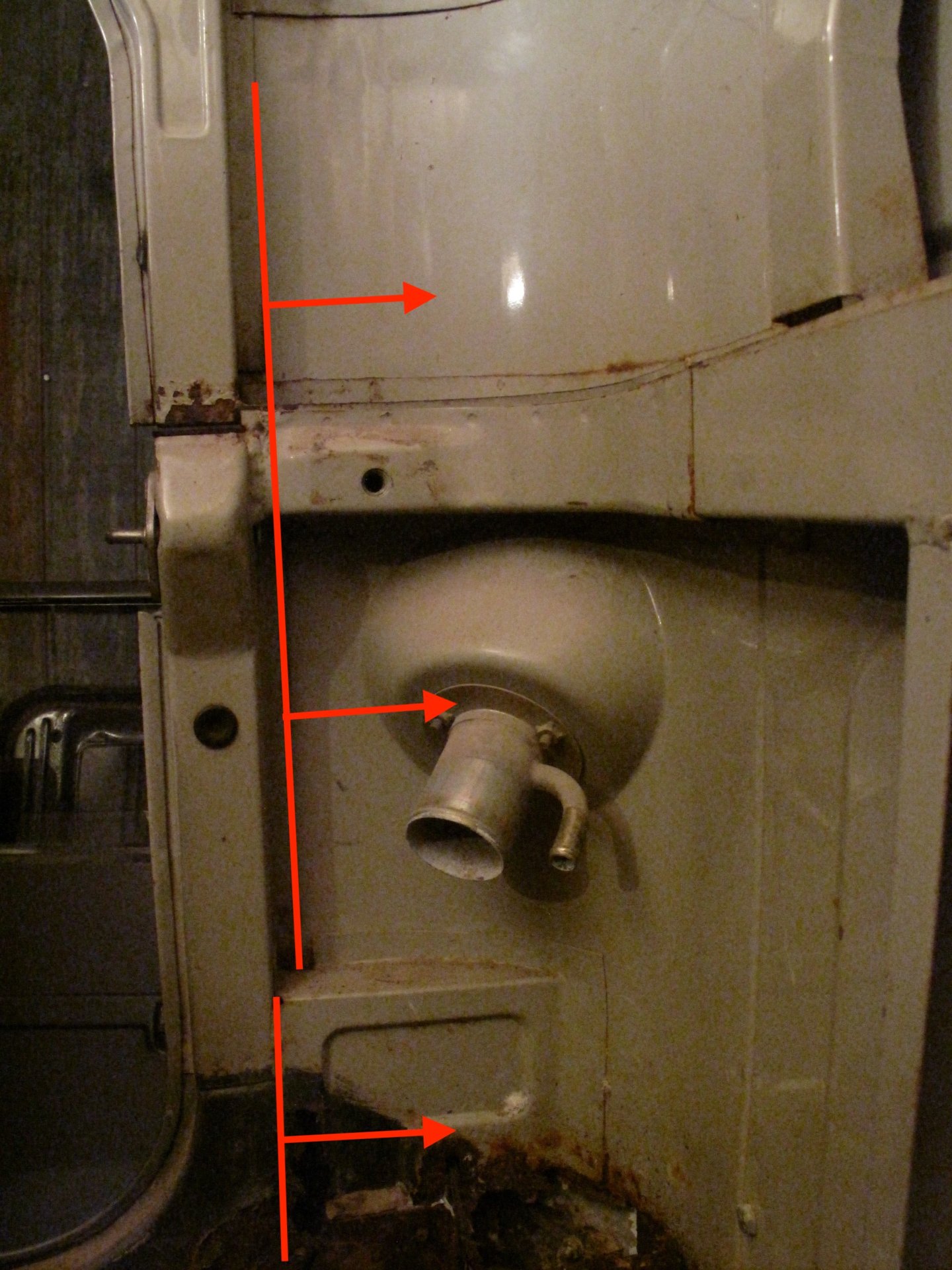 My first concerns are:
Should i leave the gas tank at that spot and attach seats further back, or have the tank further back as well ?
Thinking of using the original seats for now. Gas filler will remain on the corner so pushing it further back with the seat seemed better.

I’m also thinking of using the first frame mount for the box to sit the cab instead (might be a little more than 6 inches). 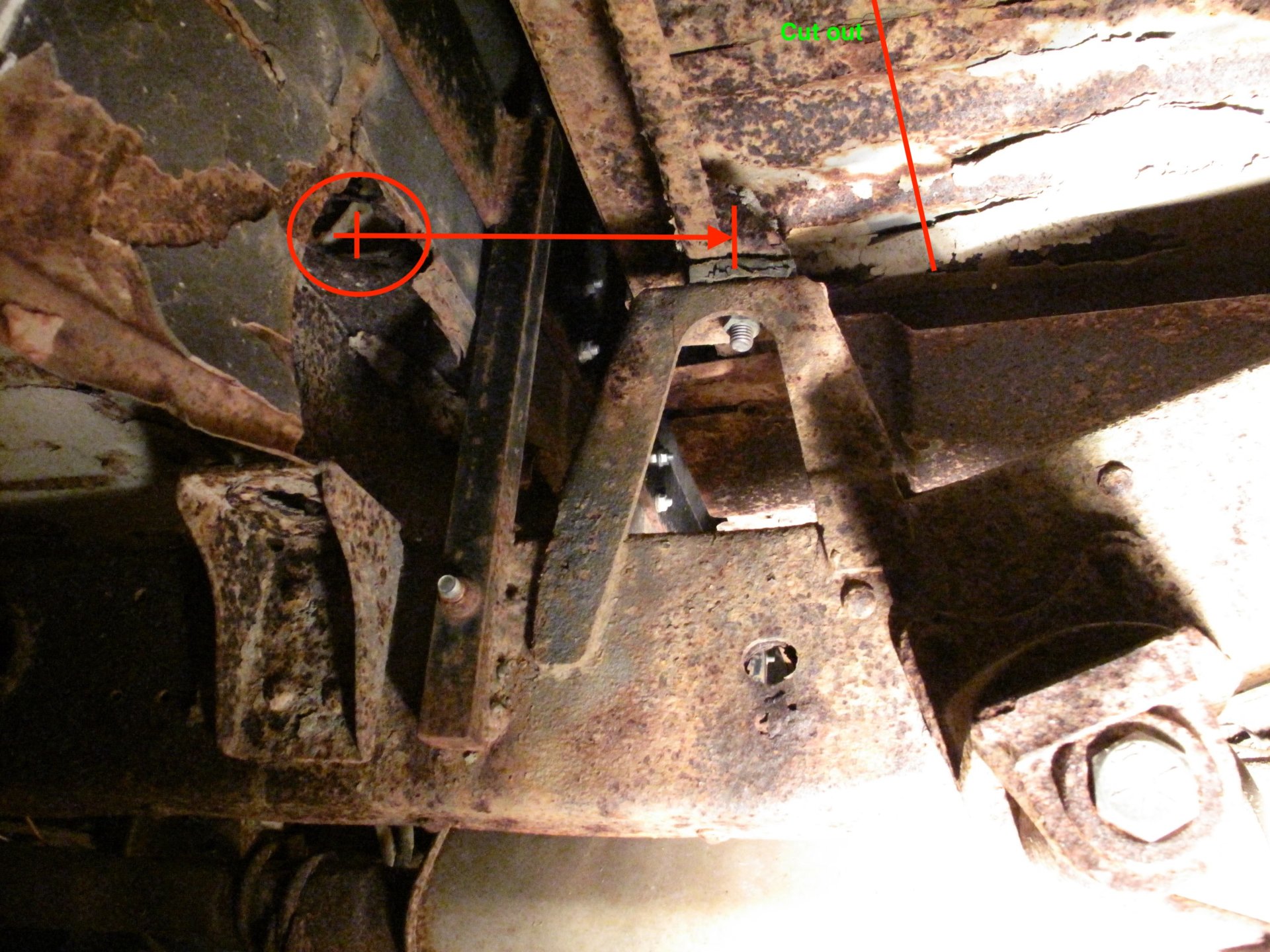 Or, where and how did you guys support the extra length of the cab ?
Did anyone ever cut a 45 top, right behind the door mount to stretch it ?
Please see images for more info.

Here are tests for windows

This is what i'm aiming for..

Take a look at Skips 35 in hard core build it will answer many of your questions. I stretched it 8” instead of 6” just felt better to me at the time. If you have any questions after reading what I have done just give me a holler.

Couple of thoughts & a link,
Check out seapotato's project for a low budget stretched cab, if you haven't stumbled on it yet.

I debated bothering with a build thread, but this website is boring lately , and if nothing else , it can serve as my own private personal parts wanted thread, cuz there's one or two things I'm missing. Nothing too special, your basic extended cab 45ish thing from a ratfucked 40 tub with an as...

forum.ih8mud.com
Many seem hesitant to stretch the frame & although I have not done a 45 I have stretched a medium duty truck and it wasn't that big of a deal. IMO the box already looks a little funny with so much rear of the back axle and shortening forward of the rear axle really emphasizes that.
Unless your starting with a real good frame, what about building on an 80 frame, if you can get your hands on one?

Having fun with it and having your son involved is the most important. What ever you decide it will be fun!

Ok, i'll check it out. And for sure i'll get back with some questions thanks ! @47coeman

@PG45er - thanks also. i do have an 80 i'm thinking of keeping for parts, so the chassis would be available. But 3-4 things stop me. A 45 on a 80 chassis seems like a really big job, it probably woulnd't pass inspection afterwards and i have a B motor i what to swap in the 45 later on. I drive an 80 already, and its terrible on gas, i dont think i can afford a second one on the road

Original design of the 45 seems a bit odd for me too, i dont want to make it worst for sure. I understand that it does emphasizes the back section of the bed. I'm not sure at this point. Once i get the cab and bed off, i will see what i need to do, Frame is bad.

jmphilion said:
Ok, i'll check it out. And for sure i'll get back with some questions thanks ! @47coeman

@PG45er - thanks also. i do have an 80 i'm thinking of keeping for parts, so the chassis would be available. But 3-4 things stop me. A 45 on a 80 chassis seems like a really big job, it probably woulnd't pass inspection afterwards and i have a B motor i what to swap in the 45 later on. I drive an 80 already, and its terrible on gas, i dont think i can afford a second one on the road

Original design of the 45 seems a bit odd for me too, i dont want to make it worst for sure. I understand that it does emphasizes the back section of the bed. I'm not sure at this point. Once i get the cab and bed off, i will see what i need to do, Frame is bad.
Click to expand...

Ya these ol frames take a beating with the rust Beatles. I have a real 45 that I am keeping the body stock. However I am having to replace the back half of the frame. It has been a bunch of work taking out rivets and joining the pieces. BTW a 40 frame is shaped the same if you cut it in the right places it comes out right and it would be hard to detect it was spliced, again many hours of cutting fitting drilling rivets and putting it back together. There are many people using 60 and 80 frames still a bunch of fabing all your body mounts ETAL. People don’t realize these 50 year old utility vehicles have been rode hard and rust is a main factor. If you take your time and discipline yourself you can do it but at first it will be overwhelming for sure. The reality is you going to have at least 1000 hours in it if you don’t sub it out. Good luck and MUD people will help you with plenty of answers.
Best Skip Landon
You must log in or register to reply here.