Went to a wedding reception today, a two-hour drive to Indianapolis from home here in Illinois. On my way home, with less than an hour to go, all of the sudden the dash went mostly dead, the Cruise Control was dead, and the HVAC quit blowing the much needed cool air in my face. It was friggin' hot, which may have contributed to the issue.

I had my GPS to give me a speed and my Hellroaring charge indicator was still glowing bright red. I had power for many things like the audio from the head unit, the cigarette lighter circuit was OK (GPS was running off that), and my Scangauge gave me the all important water temp. I decided to just keep going.

I cracked my handy EWD open. Sure enough, the Gauge circuit fuse was blown. I replaced it and fired the truck up. Gauges were back, but so was the AC, to my delight (after imagining how much it might cost to fix that.) Sure enough, the Power Source (Current Flow Chart) on page 42-43 shows that the Gauge circuit has as "Related Circuits" the AC, the blower, cruise control, and things like lockers (which I don't have) all seem to have some connections with the Gauge circuit. Never would have thought most of those would have a connection to the combo meter circuit with the gauge cluster on it. This does explain how I was able to continue home, although it was getting pretty hot without the blower running.

My question would be, after replacing the fuse and getting things going again, Is there anything else I should run down as a potential problem here? I had just turned the blower on its highest setting shortly before things went off, so maybe that extra little bit of power was enough to blow the fuse. Never had a previous problem with the blower, so maybe it's just getting old, a little more drag and higher resistance and the fuse blows. Looks like I will have more opportunity to test this. However, any thoughts on this would be appreciated.

check the amp draw on the blower motor, maybe its getting some resistance in the windings due to old age and use causing a higher draw.

Of course goes without saying to inspect and verify, but it sounds like your A/C compressor is going out and seizing up. This will cause the strong current pull and knock out your fuse. Same exact thing happened to me. So went ahead and replaced the compressor, dryer, charged it all up and cleaned the evaporator and condenser.

Check my thread and you can see a pic where my clutch eventually burned up.

bigredmachine,
I was suprised at how relatively easy it is to get at that blower. But more evidence showed up...

Paul,
I'd noticed a couple of things I wanted to take pics of and ask if they revealed anything more...

After R&Ring the fuse, I seemed to have AC back just sitting there idling in the garage. Then I punched a hole in my index finger with a nail then was just begging to get infected, so I set off for urgent care with the AC blowing. For about 2 blocks it was OK, then a harsh squealing noise erupted. I immediately hit the AC button to turn it off and the squalling stopped. Yep, I think my AC compressor is toasted, which is what I was smelling yesterday.

Here's a couple of pics. Down below the AC compressor may be evidence of it puking. 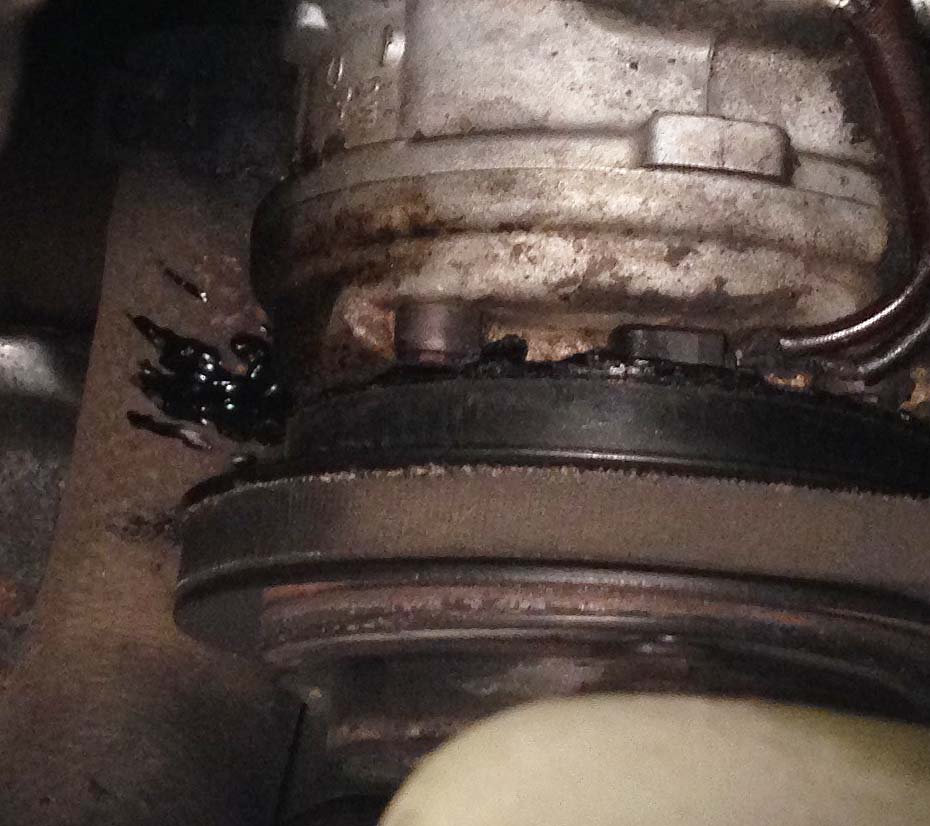 The two main drive belts were just replaced by my mechanic before our 1500 mile trip to the UP a few weeks back. They show some evidence of spakly stuff that was shaved off the AC belt or maybe just ground of that belt when the compressor was hanging-up. 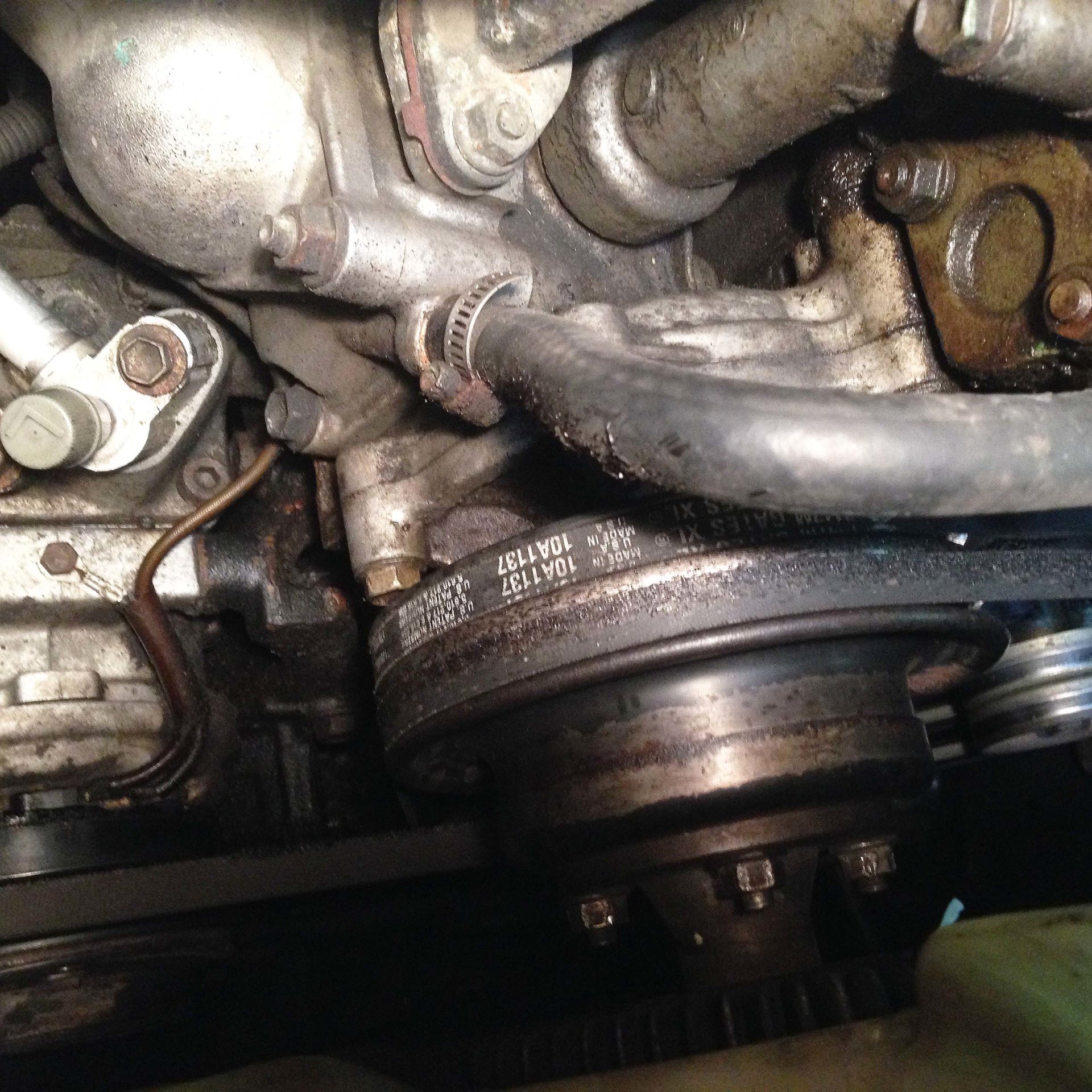 I'm hoping those two belts are ok once wiped off, but looks like a definite new belt to go along with the AC compressor-damaged one. Looks like the truck will be headed to the shop as soon as I can make arrangements. Good thing this week is supposed to be much cooler than the last week.

The compressor clutch is dead. Off brand clutches are available, but for the real deal, the Denso 471-1166 New Compressor with Clutch is much less than just a Denso clutch.

Yeah, the whole unit seems to be the way to go. This one lasted 22 years and in another 22 years I probably won't care too much.

Yup, all the droppings are from the burned up clutch.

Call the Coolstream vendor here on mud. They will set you up with everything Denso and answer any of your questions. Looks like the belt was fraying because of the seized pulley/clutch. Probably ok, but I would replace them for piece of mind.
Last edited: Jul 22, 2019

That pesky AC clutch started squalling today. I cut it off, based on a hunch and the advice here:

Leaving for CA in the morning.. AC compressor just locked

Driving home from dinner with my parents before a week road trip up the CA coast from Phoenix... Ac compressor makes a "WHIRRRRR" and then everything goes, AC, Windows, Cluster/Gauges all go dead. I pull over and realize that the compressor is smoking and limp it home.. sweating my ass off i...

That belt is of no further use until the compressor gets swapped out, but it could break loose and cause some minor havoc I don't need to deal with.

Um....maybe you missed our prior two posts lol. Glad you for it figured out though.

Yeah, I might have. Getting old is heck, pretty soon you're no longer certain where the voices in your head are coming from, but you know they're smart enough to follow along and you'll be OK....
You must log in or register to reply here.

Dealing with AC issues after replacing just about every component

NEW EXHAUST 3IN SS OFF CXRACING HEADERS AND NEW OEM 4.5