Can I see a few examples of 60s/62s running a lightbar? I've got a 40in lightbar I thought about throwing on my jeep replacing the roof mounted kcs for a cleaner look. I then thought, what would it look like on the box (my 82 fj60) and if I should just throw it on it instead.

https://www.superbrightleds.com/cat/off-road-lights/
(Not mine. Know nothing about them.) 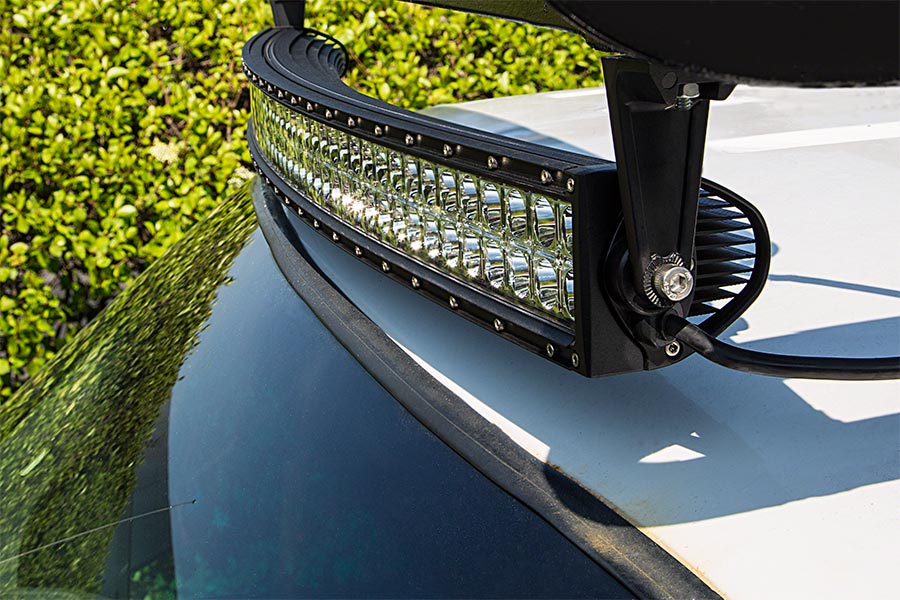 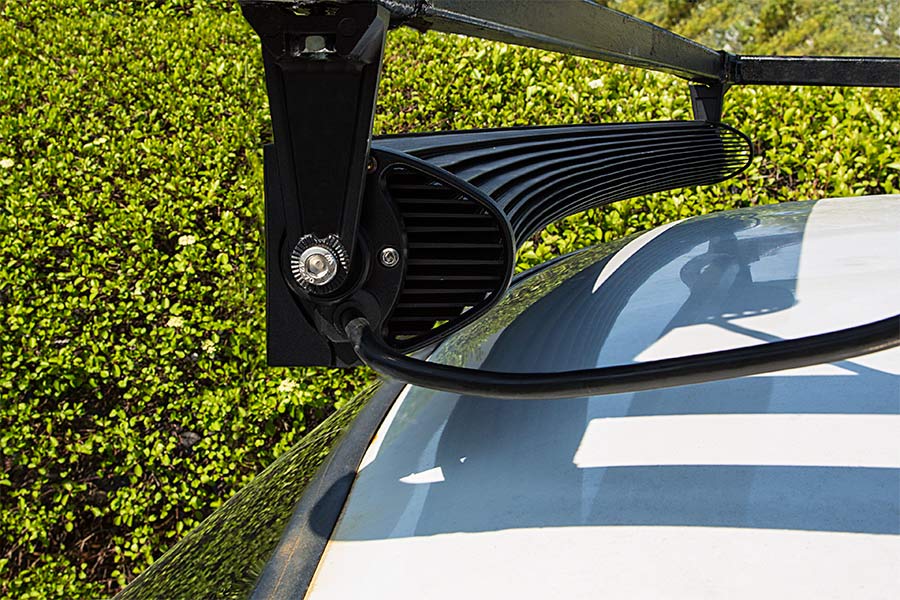 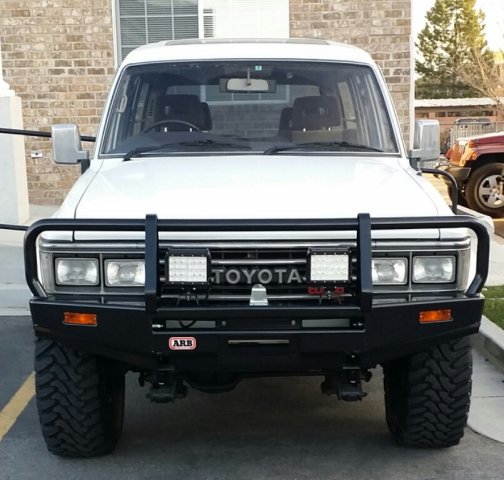 here are the different looks. Loved all three

Output Shaft said:
https://www.superbrightleds.com/cat/off-road-lights/
(Not mine. Know nothing about them.)

I've never seen the curved ones before!
I'm not a big believer in light bars, you're better off with a set of Hella 4000 euros IMO.
Light bars are for reversing and camping.

Crick60 we run very tight technical trails and the led bars are great for them. Even the spot pattern has a ton of bleed and acts like a flood. For high speed desert they aren't perfect but a good all around light.

I do like the arb led spot lights. So bright they killed a vampire.

MicahMan said:
Crick60 we run very tight technical trails and the led bars are great for them. Even the spot pattern has a ton of bleed and acts like a flood. For high speed desert they aren't perfect but a good all around light.

I do like the arb led spot lights. So bright they killed a vampire.
View attachment 1040235
Click to expand...

Yeah fair call but I'm yet to see the WRC cars fitted with light bars.....yet

Baja vs WRC not really a fair comparison but I take your point.

BTW they won't be running any light bars <$1000 in any truggy/champ truck events especially the likes of Baja or Dakar and I'm still not convinced it's the correct light for that event unless it's close quarters and a hell of a lot slower. I'd say a light bar for them is for ancillary lighting not primary.

Just saying, light bars are about the most uselessly focussed light getting around and it's just all spill and flood in whatever direction they're pointed. Hopefully in the short term that is resolved and perhaps it is now in the >$1k class.

These focus really well but they are 1400 ish a pair. I spent less than 200 on mine due to budget.

The best part about these is they are instant on and instant off. Hids take some warm up. Baja is really close quarters and decency dictates you turn some lights off as you approach slower vehicles and classes.

Wrc isn't as on top of each other so hids are preferred. Cost per lumen is going to dictate what happens in the future and as the lenses improve leds will be better.

As for me and crawling at less than 10 mph th3se work. And my trucks don't even go that fast in the desert.

With how flooded the market is with LED bars, you can't even come close to the light output/$ when comparing traditional lighting options. I actually prefer halogens or at least warmer/color filtered LEDs for around camp; pure white LEDs are just too damn bright IMO!

LED's also have barely any amp draw. (all of my LEDs draw less than my standard halogen low beams)

I used to have a $100 set of hella lights that were marginally better than my headlights. Then I found a sale on some off brand light bars and got a 12" spot bar and two pods in flood for under $200 (I think). They blew away my Hella's so much that I pulled them and pretty much gave them away to a friend. 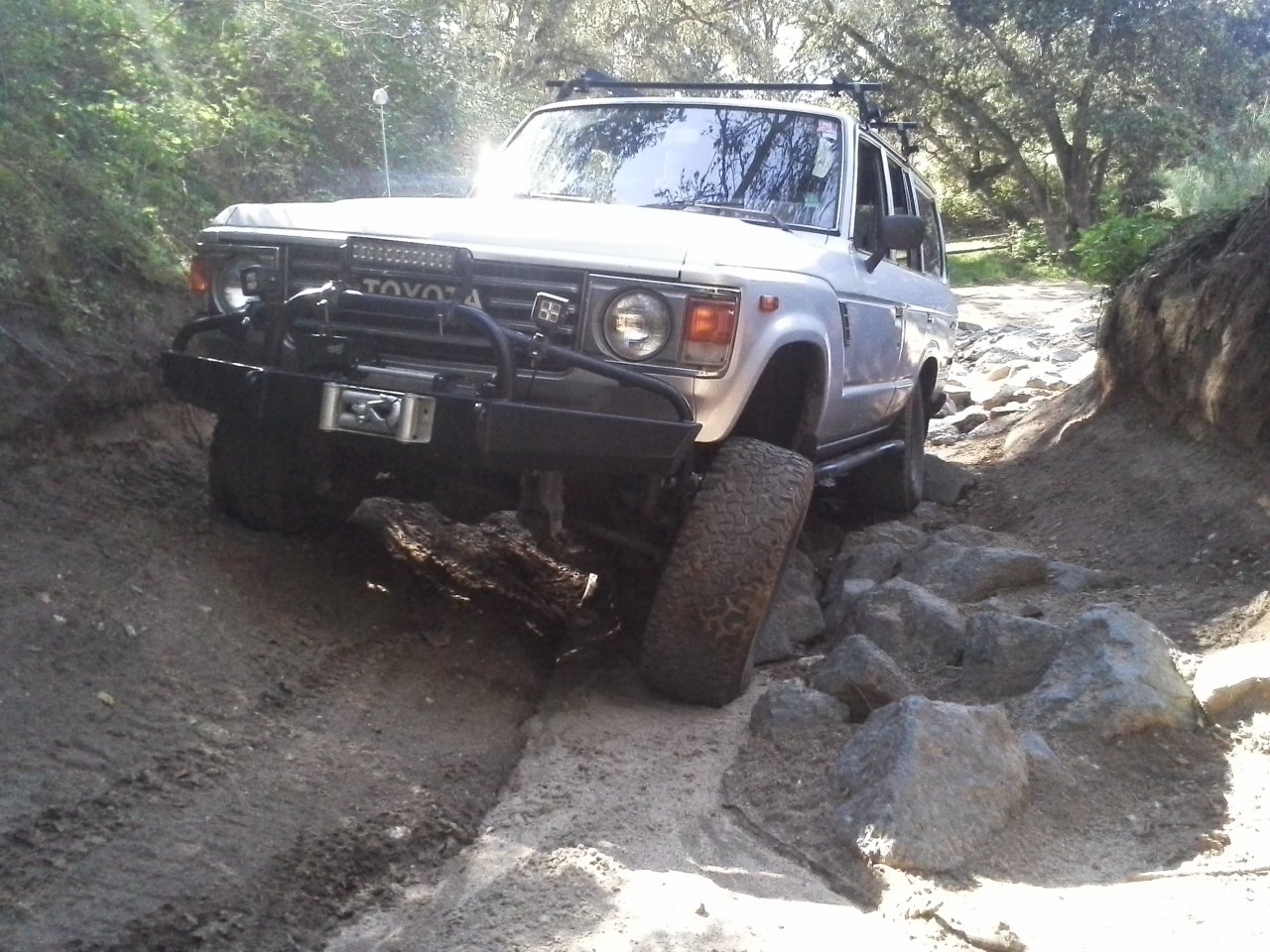 Fully agree with your comments about the lens tech Micah, I'm hanging for it.

Also re the OP question I'd stay away from roof mounting unless you can control the spill and glare on your bonnet/hood.

This is really good info, much appreciated. I picked it up for cheap and one of the photos in the comments showed a decent flood type light pattern which is good in my opinion. I'll probably mock something up This weekend. 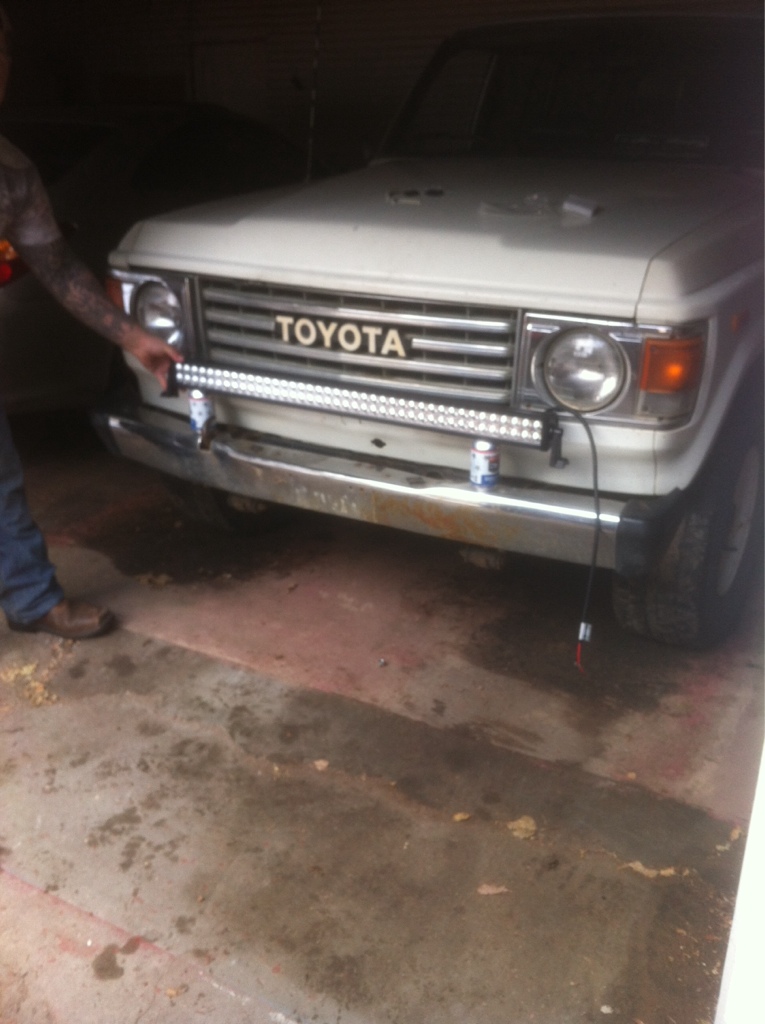 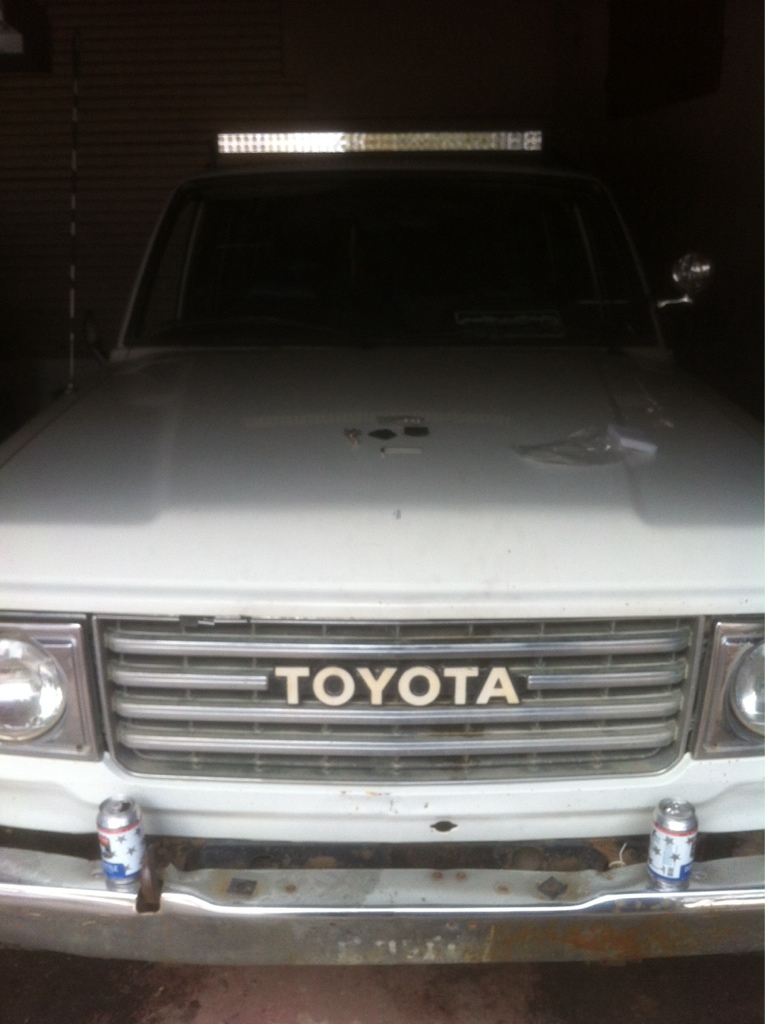 I think I might go bumper /frame mounted, unless I make my roof rack. I don't really want to drill into the roof ya know

If it was grill width, I would love it

I would try and go as low as possible or as far back on the roof to where it doesn't light up the hood when mounting a light bar unless it's a spot only set up. While light bars are pretty amazing and look really good, I find it kind of annoying on the roof. My eyes have to readjust when it lights up my normally dark hood. Not to mention they are terrible in fog, snow, dust, and rain. It does look cool though. 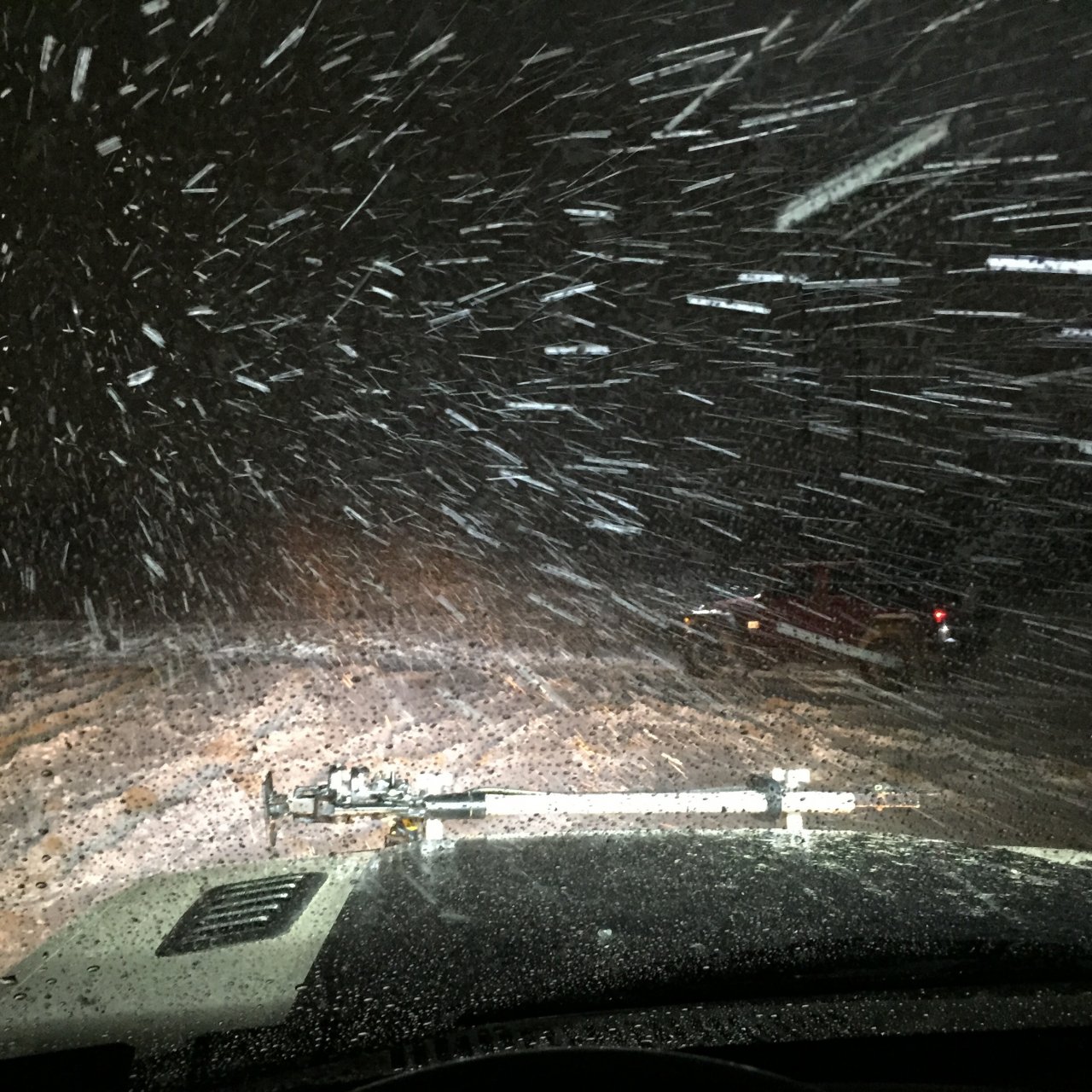 I like it better down low. It's for extra lighting as it's a spot/flood combo light
You must log in or register to reply here.