I recently purchased a Scangauge after reading about it on Mud and that thing is just awesome! Well, anyway after viewing the intake temps and reading a few threads on Mud, I wondered it would be possible to lower the intake temps by insulating the air filter canister and piping. This was largely motived by a thread by Landtank regarding his results after wrapping a winter coat around the canister.

I’m not really trying to gain h.p. per say, but I figured the intake system really just couldn’t be in the worst possible place or made of the worst possible material for heat. Considering it’s a metal can and it’s right next to the exhaust, it could probably use any help possible to keep temps somewhat reasonable.

This is the test results and I’m curious how they compare to anyone else. Do you think this actually reduced the intake temp at all? I only ran once with my scangauge and no insulation. At 50 ambient, my highway temps were between 69-73 at highway speed, without insulation.

After wrapping everything up, outside temp was still 50. On the highway at speed, the intake hovered between 55-57 degrees, even after a few runs of getting on it and testing out the horse power feature on the scan gauge.

I then parked and left the engine running to see what the intake temps would do. It very slowly climbed over about 15 minutes until it got to up about 91 degree. Water temp started at 188 and dropped to 186 during this period.

I then opened the hood and see what affect it would have on the intake temperature. To my surprise, it didn’t lower it, and intake temp very slowly kept rising until it reached 96. The engine compartment didn’t seem very hot and the intake can was barely warm to the touch.

I closed the hood and headed back out on the highway. At speed, the temps began to steadily drop. After about 5 minutes of driving at 60mph the temp was back down to 58.

By contrast everything else in the engine compartment was extremely hot. Wire looms and hoses that were right next to the intake tube were almost too hot to touch, while the intake tube was just warm.

I don’t have a snorkel. Everything about my engine and intake is stock. I'll try to report back other numbers as I drive it.

I'm really curious what the combination of a snorkle and this heat wrap would do, since folks say that a snorkle also lowers intake temps. 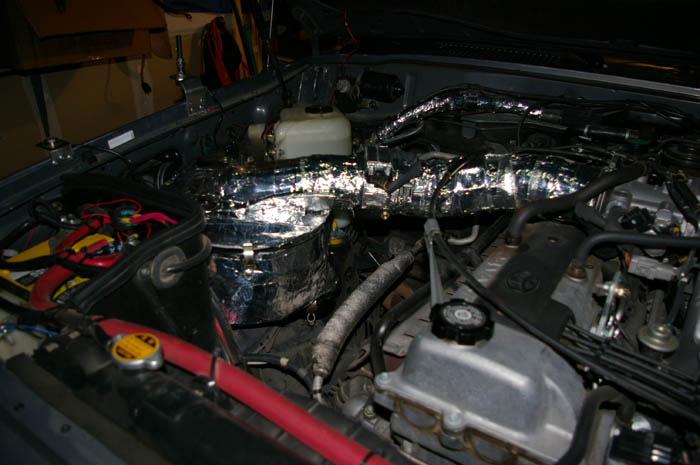 I was gonna suggest that to 96r50 with extra header tape, not sure if that is the same stuff to use. I was also reading up on landtanks experiment with the winter jacket. Now that I have the scanguage, i'm obsessed with realtime monitoring of the temps and mileage. That gadget is really cool. Let us know what you see with the wrap temps.

Interesting for sure - should have collected more uninsulated data though.
"I have approximate answers and possible beliefs and different degrees of certainty about different things, but I'm not absolutely sure about anything." Richard Feynman

Interesting experiment. Wondering what a ~15 degree air intake temp drop will do with regard to the MAF/ECM calculations (air/fuel mixture), etc. ie: how much increase performance or change in gas metering/usage would you expect? (Landtank?)

Wondering if a simple rigid heat reflector/panel (instead of a complete wrap) attached to the side of the can/muffler toward the exhaust would do as well?(that's your next experiment assignment).

pulse98 said:
"The general rule of thumb is that for every 10º of temperature drop, the density (and oxygen content) increases 1 percent. It’s actually more like 1.8 percent. Similarly, power increases by an equal amount."
Above from http://www.bankspower.com/tech_coolair.cfm
Click to expand...


I'm pretty sure if you insulated the air filter plenum(tube that runs from filter box to manifold) that you would probably prolong the life of the world's most expensive piece of rubber tubing. Which is definitely worth the time.
1994 FZJ80. Stock as hell. Lockers. Slee skid plate. Better speakers + CD player, no flares. Lame.

It's probably more accurate to say that you're preventing 1.8% percent in power LOSS for every 10 degrees you can keep the temps cool.

But what's interesting is that if my intake temps were say 50 degrees the other day, but during the summer, someone is running 150 degrees on a hot day, with no insulation, that would apparently mean a power difference of 18 percent. Or instead of 212 max h.p. (as an example) they only have 174 and that would translate across the powerband.

To me, one possible advantage of the cooler intake temps as suggested by someone else, is the idea that it may be a solution or partial solution to the common detonation problems most of us seem to have at higher temps.

Just thought I'd report my numbers as I test. Unfortunately I haven't had much time to drive it and test it, but on my way to work today...15 minute drive

Ambient temp was 51 degrees, average speed was about 30 mph

Intake temp was 51 degrees until the last few minutes when it went as high as 53. I sat in the parking lot for about 8 minutes with it idling and watched the temp climb to as high as 69.

At first, I thought maybe heat soak was playing a roll in the higher temps at idle, but I noticed that the air under the fender where it draws air is very warm. So now I think the issue is entirely just that it's drawing warm air that is being heated up by the engine. Which isn't an issue when you're driving down the highway.

I'll bet with a snorkle, this wouldn't be an issue at all. So far, this really does seem to work.

More testing though. I want to see how it performs driving on the highway for hours at a time.
1995 FZJ80, modified for regional expeditions. Click here for more...

Wondering if it would be a good idea to use some of that same insulation around the wire harnesses that get baked from the heat? Like between the firewall and the engine and along the top of the head near the fuel rail, etc,etc??
1985 FJ60 (Fairey OD)
1988 FJ62
1996 FZJ80 (lockers)

I'm sure it couldn't hurt. I had some reflective tape left over so I wrapped the main engine harness.
1995 FZJ80, modified for regional expeditions. Click here for more...

Brian894X4 said:
I'm sure it couldn't hurt. I had some reflective tape left over so I wrapped the main engine harness.
Click to expand...

Its great when people collect actual data. curious to see how the shielding works in the heat and if it actually affects water temps
IFS Stone Thrower
http://www.pirate4x4.com/forum/showthread.php?t=912264&highlight=starfighter

Well, I wonder how it would work in summer too. So far, the IA temps seem to hang close to ambient temps in these conditions and I doubt we'd see better than that. But if we could get even IA temps of 90-100 degrees on 85-95 degree days, that would be an improvement compared to some of the IA numbers I've seen posted, like 150 degrees! I suspect the key is going to end up being the combination of this insulation AND a snorkle that makes the most difference.

This was at night, ambient temps varied from 40-45 degrees.

After 15 minutes of city driving, the IA temp, started at and remained at 46 degrees. This was from a cold start up. Full WT warm up took a good 10 minutes.

I then parked it for 15 minutes. I was inside a covered area, so the ambient temp was slightly higher at 45. During that 15 minutes the IA went from 50-69 degrees. I then opened the hood, with no affect.

I then lightly sprayed water all over the intake filter and canister for about 15 seconds. The temp stopped climbing and very slowed came down to about 67 degrees after about 5 minutes.

I then closed the hood and took it out on the highway. Ambient temp was 42. Within 5 minutes on the highway, the IA was down to 46 where it stayed no matter how I drove or for how long, as long as I remained at highway speeds of 50-60 mph. As soon as I slowed down significantly or stopped, the IA started to climb very slowly.

So, far at highway speeds, this mod seems to keep IA temps to within a few degrees of Ambient temps, but slowing down or stopping really has a major affect on IA temps. I tend to this is almost entirely because its breathing in hot air from the engine area. I wish I had snorkel, because I suspect, temps could remain close to ambient even at low speeds with a snorkel and this insulation mod.
1995 FZJ80, modified for regional expeditions. Click here for more...

I noted similar observations with a friend's scangauge:

what impressed me is that how fast the air got heated in such a short amount of time inside the air canister. The air temp is inside the MAF sensor so it's a very short distance from the fresh air intake inside the fender. I noted temps in the intake as hot as 40 degrees hotter than the air box temp!
~Ali~

I am at the point off doing this also but i wonder if its a good idea because once the airfilterhousing is hot it wont cool off as fast also as when it was not insulated.

Especialy at higher speeds this rams in cool air nicely i gues ?
You must log in or register to reply here.