I found the source of the knock!! (1 Viewer)

I could not believe it. The upper half of the piston seperated from the lower half. The moving part still had one ring still on it so no dammage was done to the cylinder walls. They still have all of the cross hatch marks from the rebuild. Yes this motor only has 37k on it after a rebuild by PO. It looks like the piston casting has some serious voids that caused a weak spot.
I need some advice. Since there was no dammage to the block, and only #6 piston blew, should I replace all pistons, con rods, rings and bearings. The bearings look good. Can I just reuse them. Is there anything else I should do while I am in there? BTW its a 12/74 F engine in a FJ55. The pistons have a 050 on the top. Does that mean it is 50 thou over?
Thanks 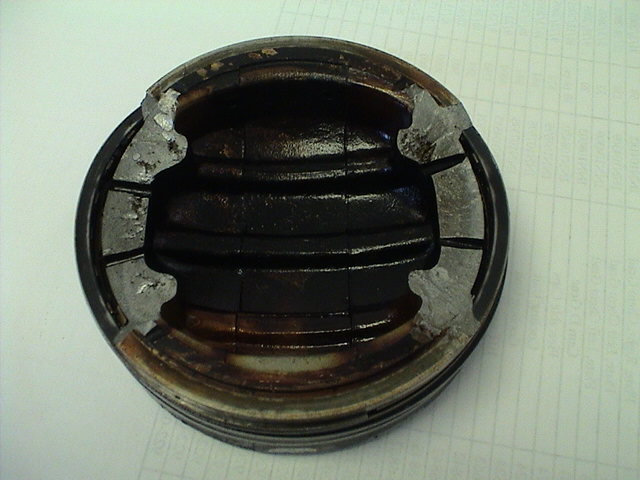 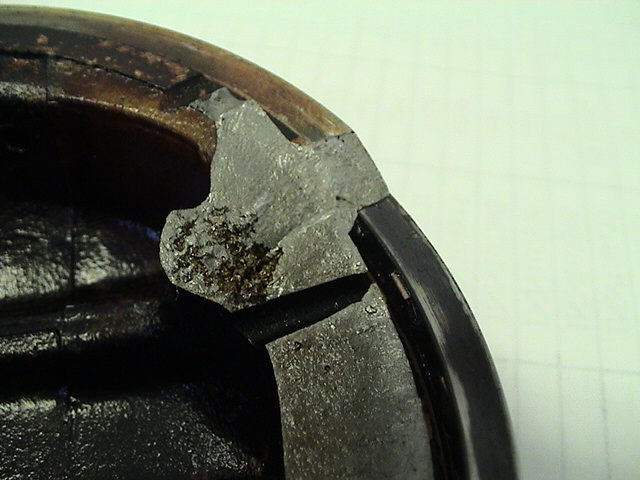 I'd at least do all the bearings, those pieces went thru your engine....50 on top should mean .050 over alright. Something had to cause that...have you had real bad pinging from detonation? Drop a valve?

I didn't notice anything while driving. It happened during one of the few times my wife was driving the truck. I was riding shotgun. It was her fault. We were on our way back from a 900 mile round trip, 100 to go. Almost made it. The head looks great, valves look great. When I did compression test #6 was zero and #4 was 45psi. I still have not figured that out. Ill do some more measuring and inspecting after work.
Do pistons and con rods come as a set or do I just reuse what I have. Where is the best place to get parts. I will be making some calls too but I just want to run this by you guys as well.

Pistons and wrist pins come as a set. Rings are usually separate. You reuse your rods. I had the machine shop check mine for true(round).

Hey thanks, I will have to find a local shop to check mine out.

Wow, Those long-skirted pistons might be heavy and create more drag, but that length sure saved you a thrown rod!
When you pull the pan, check to see how much debris got in the oil, check the screen on the pickup, etc. If it was a clean break that didn't generate a lot of shrapnel, and your bearings are not scored, then I don't see a reason to change them. If the oil system picked up crap from the pan, it could be in the oil galleys, so check that out too, because thet will take out your new bearings if you do decide to put new in. If you do decide to reuse them, check the clearance with a plastigage kit (they're cheep) just to be sure they did it right on the rebuild. I'm not sure whether you could find individual pistons - maybe from some pack rat (but not this one!). I don't know of any machine shops in San Rafael - I use Selby & Sons in Santa Rosa but they don't specialize in TLCs - they just do a lot of old school vintage engine work. You might check with Mudrak in Sonoma for his recommendations on local engine parts suppliers - who knows, he might have a set of used 0.050s that were just too good to throw in the scrap heap!

BTW, I heard rumors a while back of less expensive F pistons from a fork lift service company in the Bay Area, but never followed up on it.
http://www.tmhnc.com/
The F was used in Toyota fork lifts in 60's and 70's.
Good luck

First thing I did was pull my pan. I didnt see a lot of material at all. There was one good size chunk of aluminum though. I will check the screen too. Didn't do that yet. Thanks for the other info. I attached a pic of the skirt, the last ring is just held in but it saved my butt. There is zero scoring on the bearings but you are right about the plasti gauge. I will do that too. I now have an excuse to get that creaper. Dont you just love the little drops of oil in your face
What do you mean by long skirt, do they come short and is weight the only bonus? Is there a way to flush things now that everything is torn down? Keep in mind that it is in the truck. 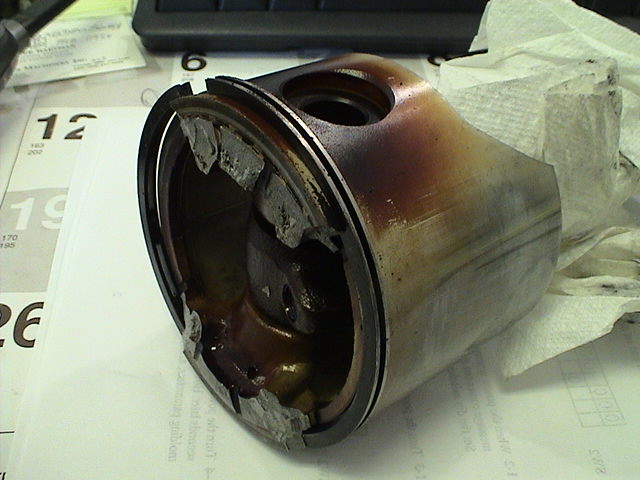 BTW, this happened at about 70 mph

A strange failure. I've seen pistons separate but always from the wristpin pulling away from the skirt. Be assured there is debris in the oil system and it needs cleaning. Since the engine needs pulling apart it only makes sense to pull the main caps and check for scoring. Thanks for the pics.

Pistons CAN be purchased individually.

While debris has certainly gotten into the pan it could not reach the bearings unless it got through the pump AND the FILTER.

There is no need to replace the bearings or to other pistons. Replace the damaged one and clean everything out carefully.

While debris has certainly gotten into the pan it could not reach the bearings unless it got through the pump AND the FILTER.

There is no need to replace the bearings or to other pistons. Replace the damaged one and clean everything out carefully.


Actually, SOR has them priced individually. I spoke out of turn. Should just lurk and not speak.

I looked at SOR today and saw the individual pistons for sale but I didn't see any .050 over. I'll have to give them a call in the morning.
If you look at the first pics, the closeup shows some inclusions (sp) It looks like some slag or impurities got into the casting. There are three or four smaller ones on the other side. I showed it to a friend of mine who did lubrication testing for ten years at Chevron. He has a lot of expperience with motors. He came to the same conclusion. Just bad luck on my part I guess.
B

By long skirt, I mean long compared to the hi-rev performance slipper-skirt pistons, like these small block pistons. Yo can see that if anything fails on one of these slippers, it doesn't take long for the piston to cock in the bore, sieze, and then the other 7 either pull the wrist pin out or break the rod. The good old torquey truck engines like the F use these big cylindrical full surface contact pistons. YOu can see that the bottom half of your piston had plenty of surface to keep the piston straigt in the bore, which saved you a lot of grief. Once the rod gets loose in there, you're lucky to save anything.

Is this a late F (some call the 1.5) that has the passenger side block mounted filter and good oiling system? You could also pull the oil pump and look for aluminium chunks. Washing the galleys out would be a bit of a pain with the engine in truck - Mark coudl give you the best advice on that.

I see what you mean. Yea, its a late F. I dont have the block number but it is in a 12/74 FJ55. It looks just like my 78 fj40 I had many years ago. What is the difference between a "1.5" and a 2F. Is the oiling the same? It sounds like I should just make this motor well and not even bother with thoughts of a 2F.
You must log in or register to reply here.

Look what I found. NOS Toyota