I am currently in the throws of rebuilding a 1HZ engine out my 1993 HJ75 Troopy. For a complete details about it see my thread in Old North State Cruisers forum: https://forum.ih8mud.com/nc-olde-north-state-cruisers/453180-rebuilding-93-hj75-troopy.html

While the troopy is down I have had a lot of time to think and dream. I decided I want to return to the original size rims 16's instead of 17s. Importer installed the larger rims and tires. I want to find and install a set of 31/33 in the 10.5 to 11.5 width. This troopy will see the majority of its time on hard rough dirt paths and highway. It will be my winter DD (snow & snow/ice mix) and transport of gear and people to adventures in all sorts of weather and terrain conditions. My wife and I are thinking of eventually using it for a 2 to 6 month overland expedition in N. America. What do you guys suggest for tires in these sizes?

After I change out the tires then I need to replace the rear bumper. I want a bumper w/ duel swing outs for tire and jerry cans. Crusher built a sweet one: Troopie build
I have been following his troopy build. I plan to PM Crusher in Ontario for his suggestions and request dimensions. Then I need a welder and some friends to help build/install w

After tires, my last initial repair will be stereo with built in IPOD and CB. I really wanted to find a way to not have a stereo headunit, but Apple has not developed a docking station for cars.

The reason is then I would have space to install the CB in the original headunit space. Does that make sense? Anyone know of a way to do just that?

If I cannot find a way for the IPOD to power the car speakers w/o headunit, I will install a new head unit and install the IPOD connections in the glove compartment or the armrest inorder to avoid messy wires.

The other mods on the list (listed in order to install):

not that hard .. just run an amp to your speakers and then you will have a cable ( mini jack to RCA ) from your amp to your iPod .. power your amp and done !

I went to change the oil this evening. I thought it would take 1 hour tops. After draining the oil, I started to install the new filter-which was based on the number on the side of the old filter. I looked at the two of them side by side and realized they were not the same. I tried looking it up in the 1HZ repair manual, but was unable to find any details. Does anyone know what the part # is for 1 HZ oil filter?

Don’t think I won’t cut you

QsLC75 said:
Does anyone know what the part # is for 1 HZ oil filter?
Click to expand...

90915-30002 should be the current Yota number, the older filter IIRC ended in 30006 but was discontinued. Check ToyoDIY, and them bounce it off your dealership.

Do a search, there were a few threads on filter part numbers. One I think had all the OEM P/N along with the all the Napa, etc... part numbers
Last edited: Aug 1, 2011 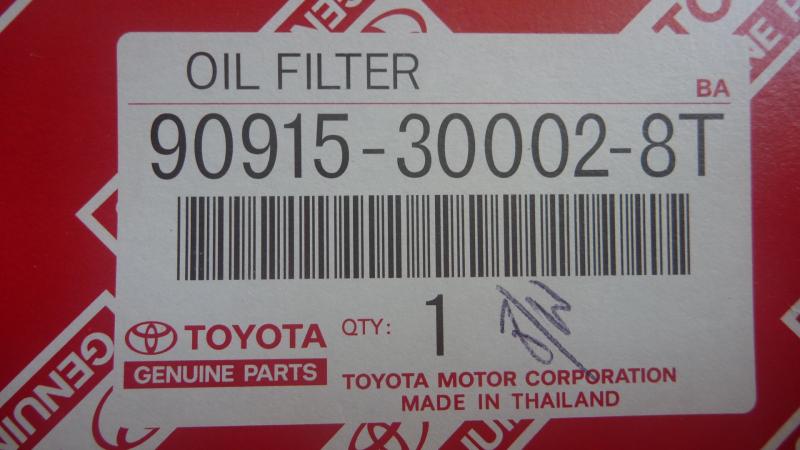 thank you guys. The toy part # helped immensely. The loc dealership found an order for a dozen arriving Thurs in Fl. I ordered two.

In the meantime, with help from my local 4 wheel drive shop tracked down the aftermarket part through NAPA. I will post it after we make sure it will fit.

While underneath it I saw the driver side control arm bushing and washer had busted I have been driving it daily the last 3 weeks and had not noticed any swaying/leaning. Those leaf springs make the ride stiff. They appear to be the originals, so I will replace both arms, bushing, and replace the washer with the heavier/thicker washers-not bad for 250 KM of wear n tear.

No...the correct part should not be made in Thailand.

This filter is available worldwide. We have 6 on the shelf.
Last edited: Aug 2, 2011

beno said:
No...the correct part should not be made in Thailand.

This filter is available worldwide. We have 6 on the shelf.
Click to expand...

Our Aus spec hiluxs are made in Thailand

Clint79 said:
Our Aus spec hiluxs are made in Thailand
Click to expand...

What I am saying is that the Thai oil filters (all of the US market Toyota filters are made in either Indonesia or Thailand), I think, are of lesser quality than the Denso Japan made filters mainly because they are the "factory-fill" filters.

My favorite filters are these factory-fill filters:

If Denso Japan filters are available for us here, of course we go for it. You have no other choice but only Denso Thai, accept the fact seems to be way.

Don’t think I won’t cut you

wongtsenhin said:
The T stands for Thailand, is genuine filter made in Thailand.
Click to expand...

Did the box smell like hooker sweat and Singha?

Off rock climbing @ Looking Glass for the weekend.

Next week I will start on the front axle repairs.

I can't wait for September when I add lights & winch & build a drawer & platform system.

Denso all the wAY !

It's a bit blurry thanks to my iPhone , but I serviced my 79 and the filter says on it denso and Toyota and made in Thailand etc 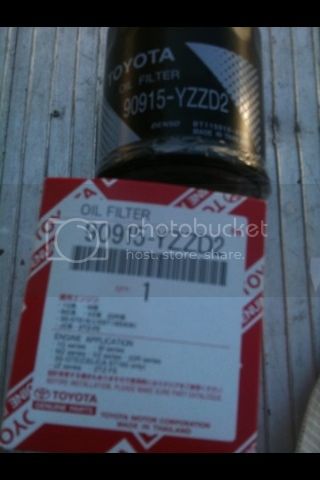 Clint79 said:
It's a bit blurry thanks to my iPhone , but I serviced my 79 and the filter says on it denso and Toyota and made in Thailand etc
Click to expand...

You should be able to get them in Oz if you have a good part guy.

You should be able to get them in Oz if you have a good part guy.

Did they now , it wasn't from my local parts guy who supplies most local toyotas dealers with there parts , got it from a auto shop which was open sat,
On the box it said it also fits the jz supra motor can't remember which one and one of the Prado diesel motors

Is the part number you supplied the genuine 1fz filter ? Whats the difference -size?

Popped in to see my parts guys , he said your part number is as you said the proper 1fz one and larger and made in Japan not Thailand ,

Clint79 said:
Popped in to see my parts guys , he said your part number is as you said the proper 1fz one and larger and made in Japan not Thailand ,
Click to expand...

Get a whole bunch Clint...your 1FZ will never be happier.