As Chris said when he sold his, yeah I know, don't sell it. Well the time has come.

Essentially you can read what Chris did to this pig and its history here: https://forum.ih8mud.com/fj55-classifieds-corner/109828-69-fj55-sale-co.html

Since I got it from Chris, I changed out front bumpers to something that has the correct shape (however if you want the old bent one, I've still got it).

I put in a new fuel filter and pump. Oem mechanical pump and OEM filter.

New clutch master, hard line, soft line (braided steel) and slave. Apparently the master was bad and leaking, but in my overkill ways, I decided to replace the whole system.

Finally I put on a new valve cover gasket.

It is located in the Denver area (Colorado) and since I've added a dent to the rear quarter panel.

The thing starts up really easily and runs well. Everything works, the Toy-box, OBA, power steering, even the windshield washer fluid. The CD player is busted, but the radio still works.

This thing is really meant to be offroad. Yeah you can daily drive it, but get used to driving a tractor and getting crap gas mileage. I wouldn't call this a good restoration candidate, just a good full-bodied wheeler in decent shape and very capable. I've had fun with it! PM me if you have any questions. I'm not open to trades, I need a vehicle out of here and I've put too much in to my 88 4runner to part with it, so the piggie goes. 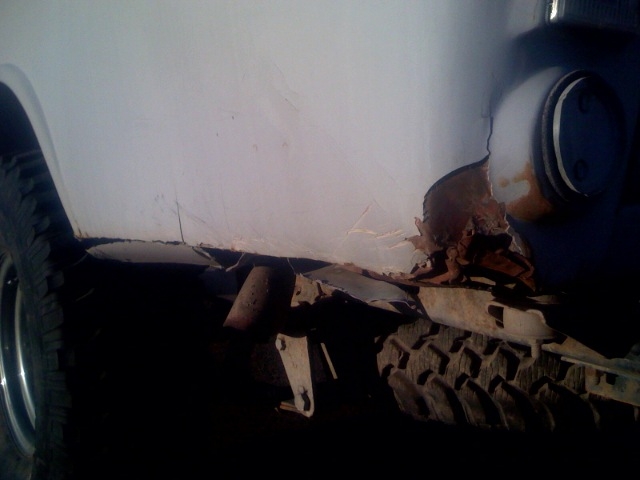 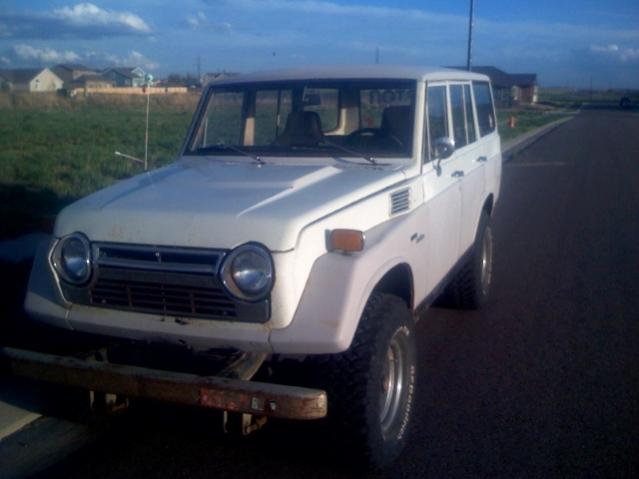 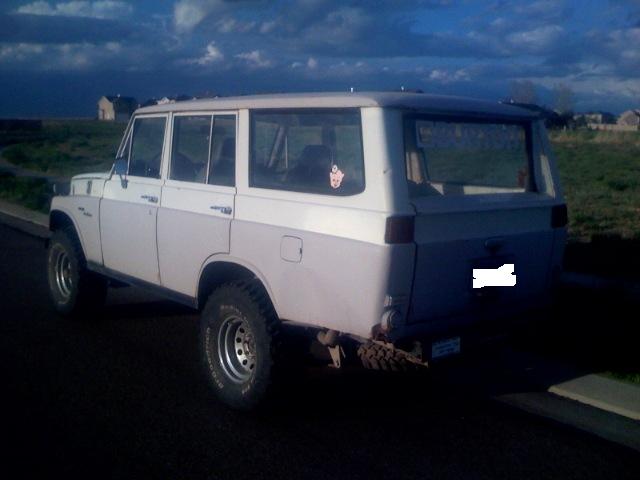 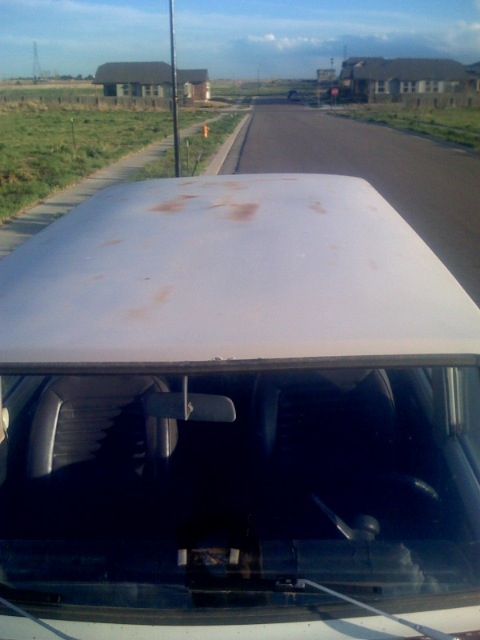 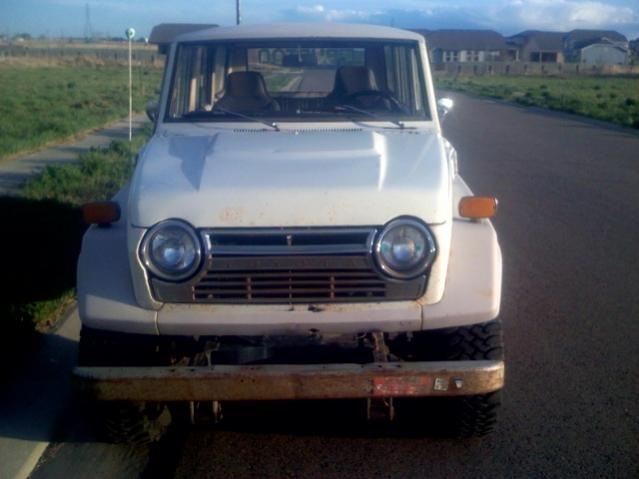 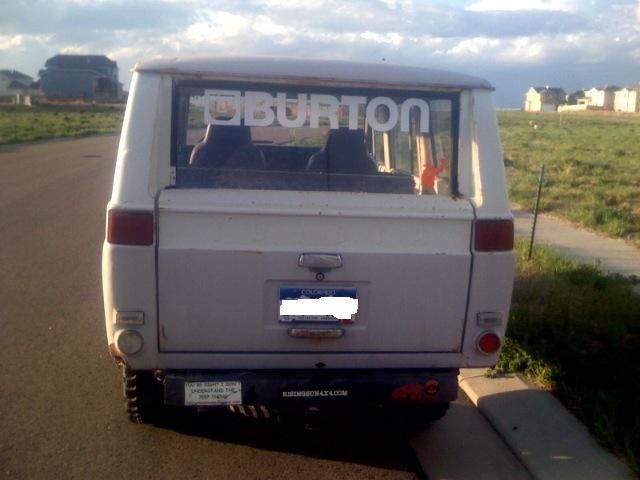 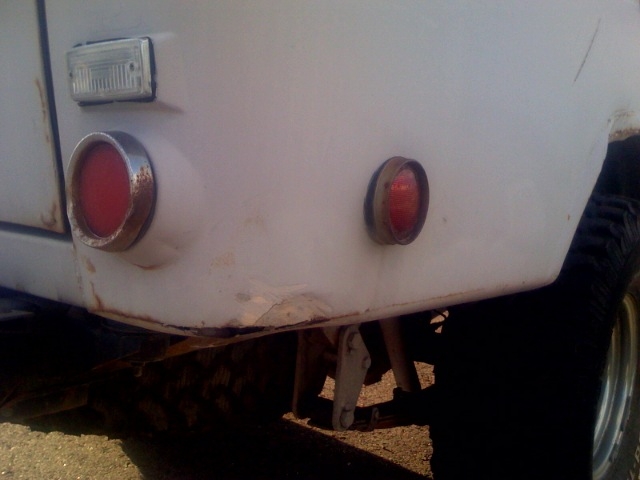 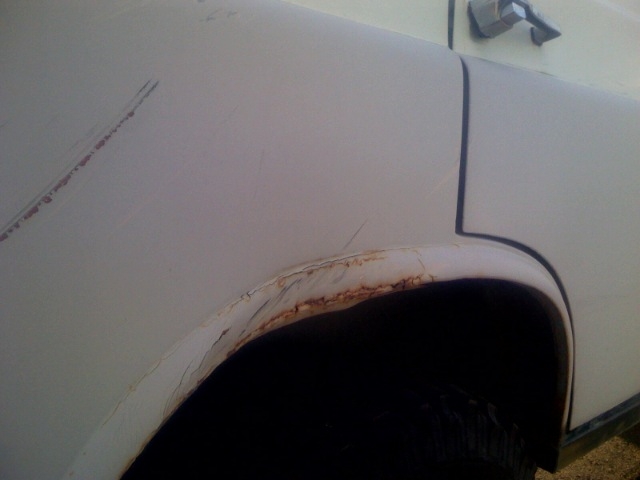 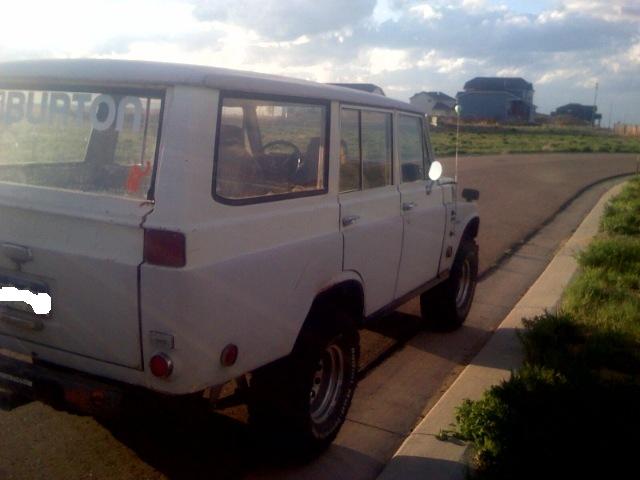 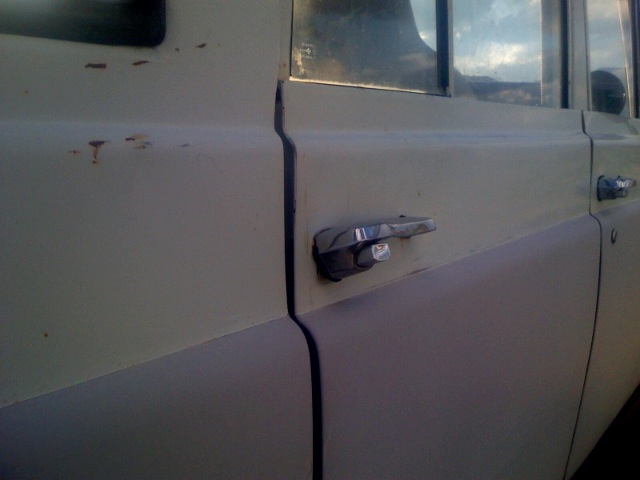 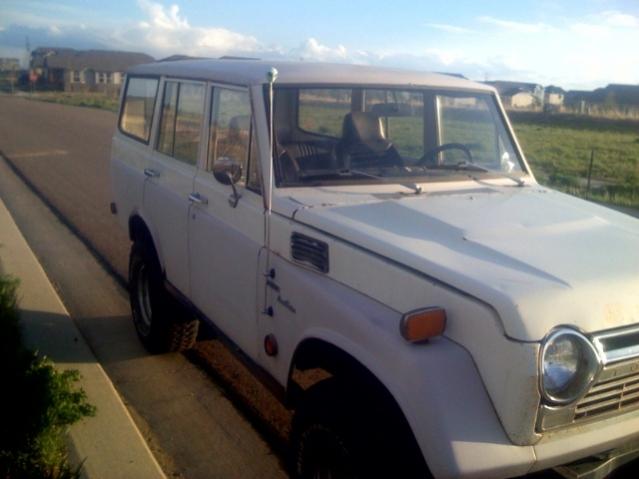 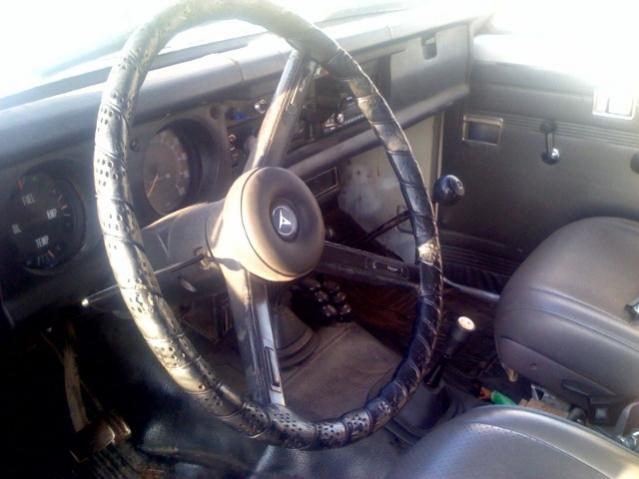 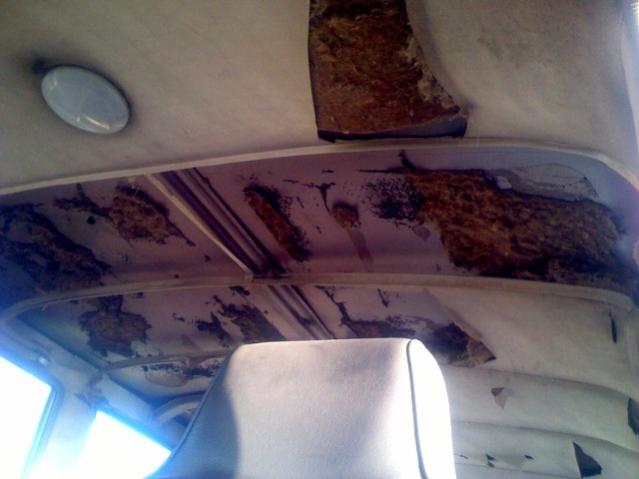 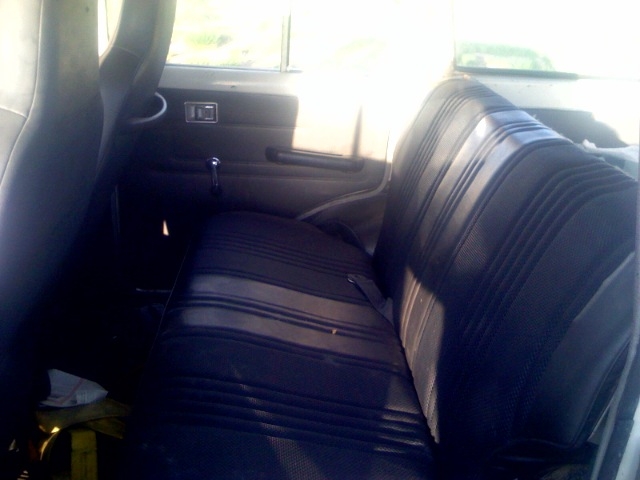 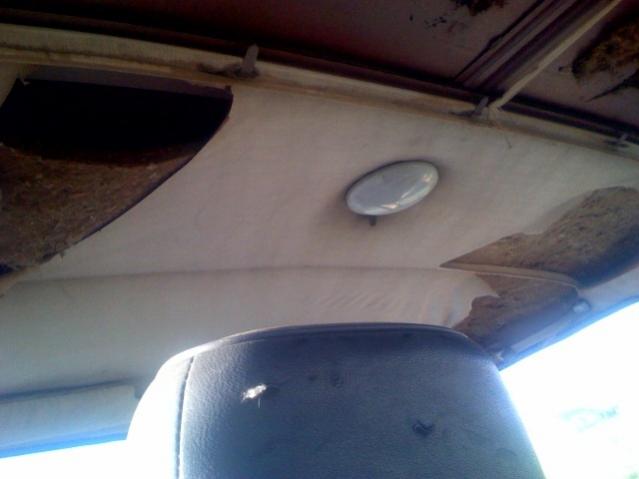 yay for the pig 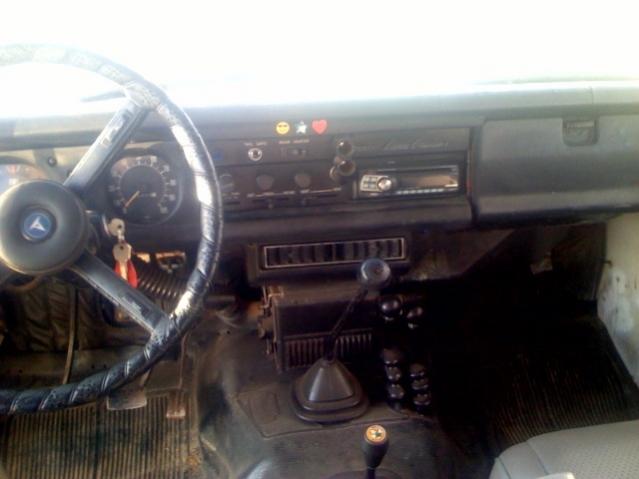 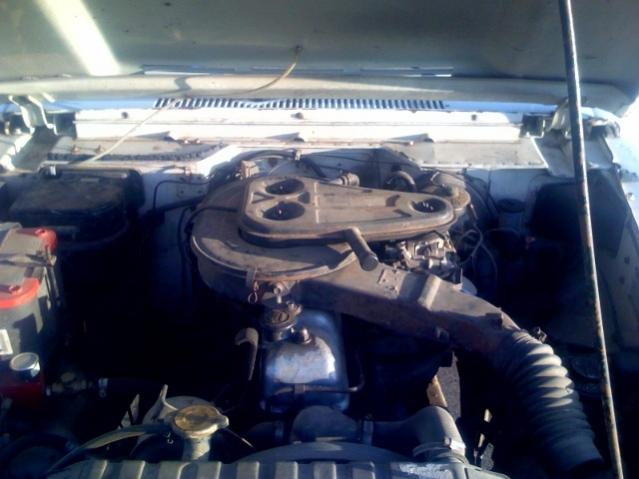 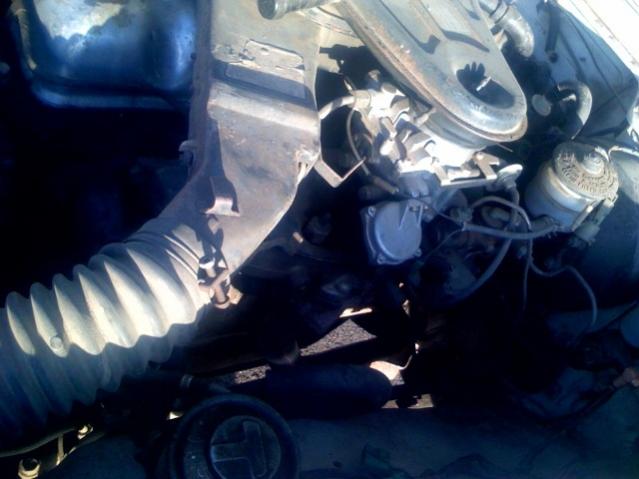 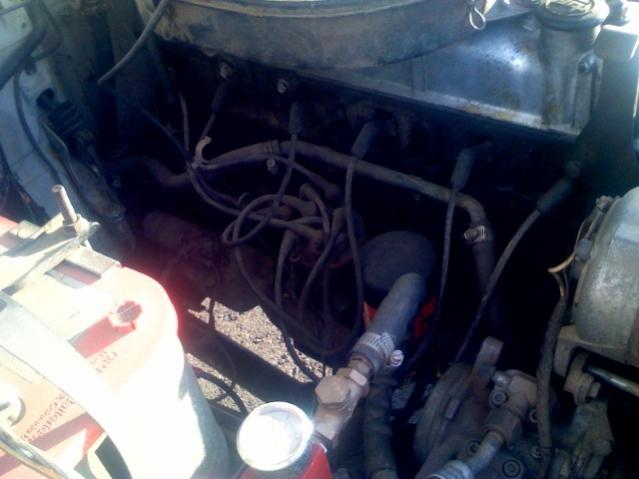 Well I gave MUD first crack at her, off to craigslist.

PM me or reply to this post if anyone has any questions about her or want more pictures. I tried to be more disclosing of her imperfections so there aren't any last minute surprises.

Her undercarriage is a bit greasy, but she doesn't leave a mess where she sits. Starts up every time and has an excellent grunt from the 2F.
Thread killer.

I do believe so. I've got a Toyota Trails that has her on the cover!
Thread killer.
N

Yeah dood! I just got done moving 6 cubic yards of compost around so I'm a little beat, but I can snap photos tomorrow.

I take it you would like to see the engine side of the firewall and the interior side? I will say it is pretty close with the carb, but there aren't any problems even when the engine is torquing on the mounts.

Anything exact that you want to see?
Thread killer.
N

wondering about the adaption Chris did to get a boosted dual circuit brake master to replace the original singlecircuit system; Chris told me about it but it has always been a bit fuzzy on how he did it and pictures to my simple mind are a lot better than words TIA

.........BTW this piggy is begging for a good home and it has had all the hard stuff done to it already

I'm bumping this to the top with a price drop. The baby has changed life and the pig needs someone to use her like she was meant to be, not being an ornament (or eye sore if you're my wife) in the drive way.

So, things that have changed since those pictures: I've ripped out all of the headliner over the front and back seats, I've gotten almost all of the insulation that was underneath. I pulled the weather strip out on the passenger rear door because it was by far in worse shape than any other weather stripping. The rear seat is currently unbolted to facilitate working in it, but this is not a big deal. If you were to come see it right now, you would also notice there is no wiper blade on the driver's side. This will be fixed with a trip to the part store.

Otherwise, she still runs great, starts right up, drives just fine. The Toybox is awesome and the rear window still works. This thing is a bad ass trail wagon with classic style that draws plenty of attention.

I have a number of accessories to go with her that I'd be willing to part with at a substantial discount if you grab them with the pig, they are as follows:

Complete redline cage kit with frame tie in. You take it with the truck, its yours for $500. Without the truck, $900.

I've got everything you need to replace the headliner (except the insulation) including rear side window rubber, tailgate rubber (not necessary for headliner replacement), windshield rubber and the headliner itself. The rubber is all brand new stuff. I'll let the whole thing go with the truck for $300. Without the truck, $500.

A pair of black leather heated power BMW seats that I was planning to retrofit. $100 with the truck, $300 without. These guys are in perfect condition and are way too nice for the pig, but I thought it would be ironic to have better seats in the pig than any other vehicle we own.

A set of essentially new alcans for front a rear. With the truck $300. Without $500 (Just decided to store them for you Tim).

I'm going to hold of on selling any of the parts until the rig goes. After that, its game on.

If anyone wants pictures of anything specific, I can arrange this no problem.

I'd be in for the Alcans if you decide to start selling off parts
Finally I can get what I've always wanted....a used Toyota.

You know, instead of making folks go hunting around, here is a list of the highlights of this little piggy.

In no particular order:

4" SUA homebrew lift (augmented stock springs, 2" anti-inversion shackles)
33" BFGs, full sized spare and an unmounted spare (6 tires in all) all with great tread.
Lockrites in the front and rear difs
'78 2F with Asain carb
New: clutch master, slave and hydraulics, OEM fuel pump and filter
h42 mated to a toybox with the low gears which is hooked to a split case with a twin stick shifter
custom extended speedo and e-brake lines to make up for the extended driveline
custom drivelines by woody's and a spare shaft (front and rear are same size, so spare is good for both)
homebrew skidplate that is super beef
caravan buckets up front
fj60 power steering box with a minitruck pump. Works really well!
On board air with chucks in front and rear, tank stowed under the truck beneath rear passenger seat
Disc brakes front and rear
2x4 channel welded into the rockers. sliders essentially.
rear window still works

Some issues:
Heater is stuck on. The fan isn't stuck on, but I think all of the cabling for the climate control needs some attention. The heater valve could also, in my best estimation, need replacing.
cd player doesn't work. Radio works just fine, but according to Chris the CD is dead. I never wanted to risk a disc to test it out.
Headliner is fully ripped out at this point. Given what it looked like before, I'm not so sure this is a negative.
Body is far from perfect, but she is still a shapely pig that turns heads. Floorboards are solid and much of the body is in great shape. Much better than a lot of the pigs I see out there these days.
Choke cable doesn't like to go all the way back in. This makes me grumpy, but doesn't stop the pig from running normally. Just a bit of a high idle.
E-brake doesn't work. I never fiddled with it but Chris said one of the pins slipped out and is an easy fix if you were up for draining the t-case. Never bothered me that much.

Extras that come with her:
A box of stuff that came from Chris. Its like an easter egg hunt in there!
A complete climate control assembly, complete with choke cable.
A pair of BMW M5 seats from 2006. They are power and heated, black leather. Beautiful seats, but they won't be appearing in any of my current vehicles and they were destined for the pig.
A couple of other little bits and pieces laying around for the garage that are pig specific.

I've also got all of those nice extras that could go with my faithful pig for awesome prices if the person is so inclined to purchase with this venerable rig. Those prices all still stand from the previous posting. Redline interior roll cage, NEW headliner with all of the rubber needed to replace (cargo windows and windshield as well as the rear window rubber, just because), 4" Alcan lift springs that are essentially NEW.

Toss an offer to me for all of it, you might be surprised.

She is awesome but needs to go somewhere that she will be appreciated by all members of the household. She always starts right up and has never gotten me stuck off road (including a couple of snow runs). This pig isn't huge, but is pretty close to unstoppable!

Well I am some of those views, but I already have a Pig! Not as built as yours, but different purpose...

I like this Pig, and was bummed when Chris sold it. This thing wheels very well.

I don't think your price is off base, I just think it will take some time for the buyer who values the Pig body for a capable wheeler (vs a 40 or an 80)...

Thanks for the bump dood!

I guess maybe I could post her up on pirate. I never really considered her a trail only rig. She runs just fine back and forth to work which I did a few times. It seemed like every other trip I'd get one person waving at me or a thumbs up.

A classy (from the right perspective) rig that will go more places than a stock locked 80 would go and not nearly as cliche as a 40. Don't get me wrong, I'm not 40 bashing, but they aren't that hard to find. I've only seen 3 other pigs "in the wild" around here.

Going to the rising sun rally doesn't count as seeing a pig in the wild ;p
Thread killer.
You must log in or register to reply here.