help with transmission over temp (1 Viewer)

this is a 6.0/4L80e. I used to all run flawlessly until I put tons under it over the winter. The only change to the drivetrain was putting an Atlas on the back. Otherwise the motor and transmission were unchanged.

But, as soon as I took it for it's first test drives, the transmission would keep getting hotter and never cool down. Trans guy did a flow test and a test drive and said it was all good. But, when I got it back, it was still doing it. My son took it on an all day and there was clearly something wrong, the transmission was failing.

So, we removed the trans, took it down. One of the clutch packs was toast, the metal ring was hanging up on the case and could not fully move, causing heating. So, full rebuild with new billet torque converter - and in it goes.

Driving around town, it's been doing okay, but today I took it on a 2 hour drive over the same mountains twice. First pass it got to 180/210. It's interesting that it's getting warming going down hill with no load and it takes a long time to warm up - a good 45 minutes. The second time over the mountains engine and trans got to 230. The engine came right back down after we crested, the transmission took a long time to get back to 180. It only cools on level ground with part throttle. No throttle and it does not cool. it stayed between 180 and 210 the rest of the way home on flat ground.

Here are pictures and a link 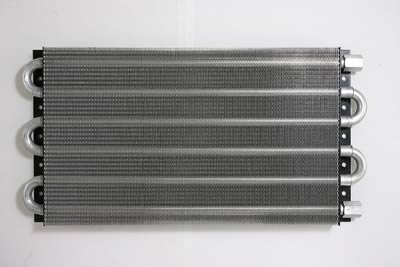 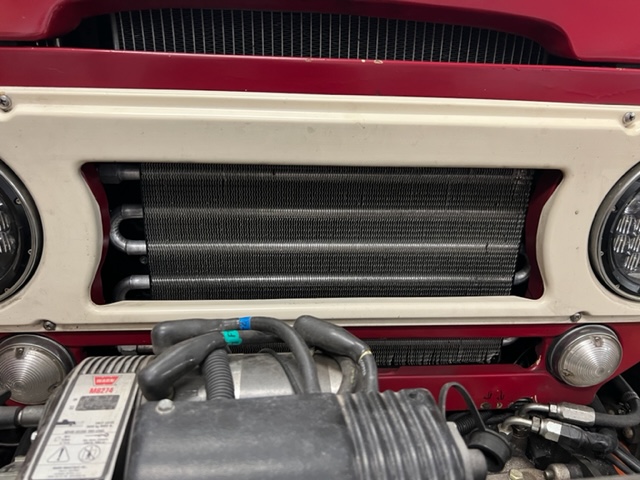 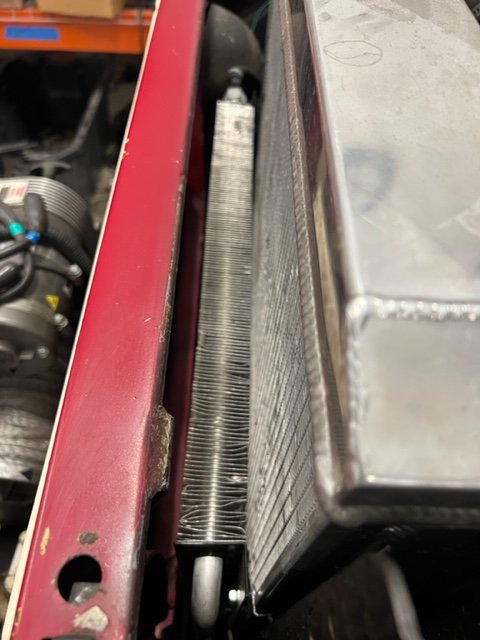 Not trying to be abrasive, but I would not call the cooler huge.

Is there a shroud on the radiator?

If you have a clutch fan on the engine, check it to be sure that the clutch hasn't failed and the fan isn't turning as it should. In other words it won't spin at optimum speed to draw air through the radiator.
P

FWIW most of the autos I see have a dedicated fan and the location for trans cooler is not piggy back on the radiator.
John on the hawgs

Okay, more pictures. Fan is electric with shroud. Perhaps "huge" was not the right adjective, but this cooler should be running 140 to 180.

I know the fan is performing, because it readily cools the engine down.

I could put a separate power steering cooler in and run the trans through the external cooler and the radiator.

I've never seen anyone run a cooler this big anywhere but in front of the radiator. The ones I see with their own fans are much smaller.

I'm wondering if there's just too much obstruction to air flow. I'm going to take the light bar off and I'm wondering if I should change over to a lower style winch, and put this 8254 winch on my FJ45 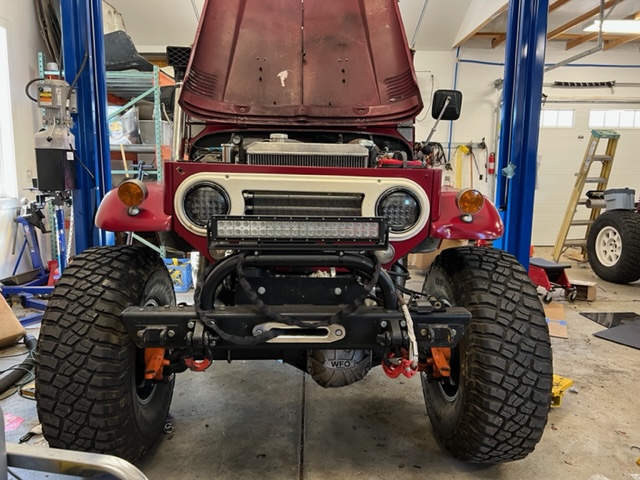 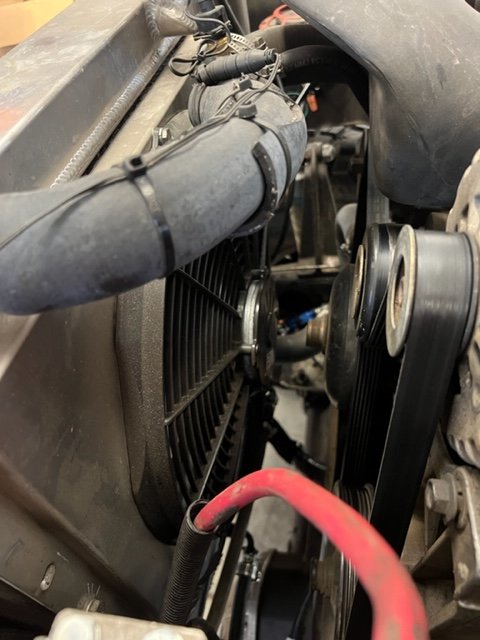 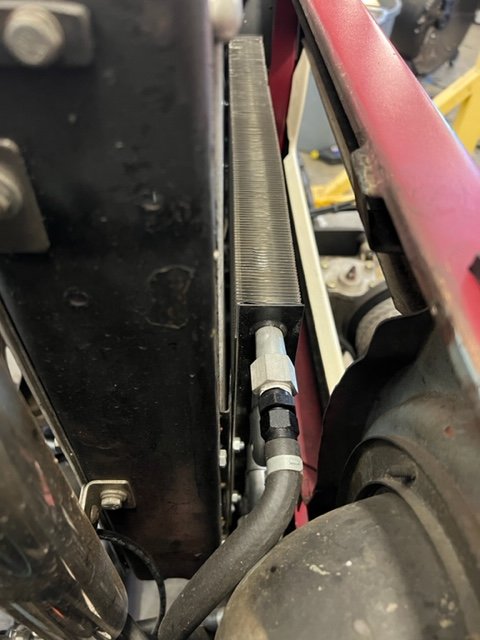 Well now I'm a little confused. It sounds like you're running the power steering line through the trans cooling connections in the radiator and an external cooler for the trans. If this is the case it could be a mistake because I believe the radiator would cool the trans better than the standalone. Power steering doesn't require as much cooling as the transmission and you could use a smaller cooler which would be less restrictive on the radiator.

Also, not all electronic fans are created equal. It looks like your picking up coolant temperature from a tap on the top radiator hose to trigger the fan. Is it single speed or dual speed, how much air does it flow? There have been many threads about electronic fans for cooling conversions.

Yes, you are right about how it's run. That's how I was told to do it by the local, well respected fabrication guy. I was told the cooler I have has more cooling capacity than the separate cooler. I guess I'll have to look into that. Yes, the tap on top radiator hose triggers the fan. Although I could move it. there's a sensor for the in car gauge in the block (in addition to one for the ECM). However, the scangauge in the cab is reading very similarly to the fan controller. It's the biggest fan I could get with the radiator.

This is the radiator and fan combo, I got the upgraded fan option. I couldn't find the exact CFM, but I'm guessing 2000 cfm.

FWIW, most stand alone coolers for trans are almost exactly the same size, they are double row so think if you folded yours in half.
IMO you have to much heat from all three systems being cooled by 1 unit, might just not have the capacity when all three systems are hot.
John on the hawgs

Send me a picture of one.

There this - which claims to be 40k btu's worth of cooling

Something like this, which is 16 pass, but that big of a surface area

I've removed the light bar and I double check that the fan is actually going the right direction. I'm going to try to take it for along drive the next few days and use an infrared thermometer on the pan and on the inlet and outlet and see what it reads. Just to make sure it's not a bad sensor.
'66 FJ40 6.0l vortec, 4L80, OME, 37/12.5/R17, 14 bolt - 4 link rear, Dana 60 leaf springs front
Half built FJ45 EV flatbed
Pacific Mountain Cruisers
You must log in or register to reply here.

Need help with a Wire