Got the 80 back from Chino Hills Transmission. Everything seems to running properly. 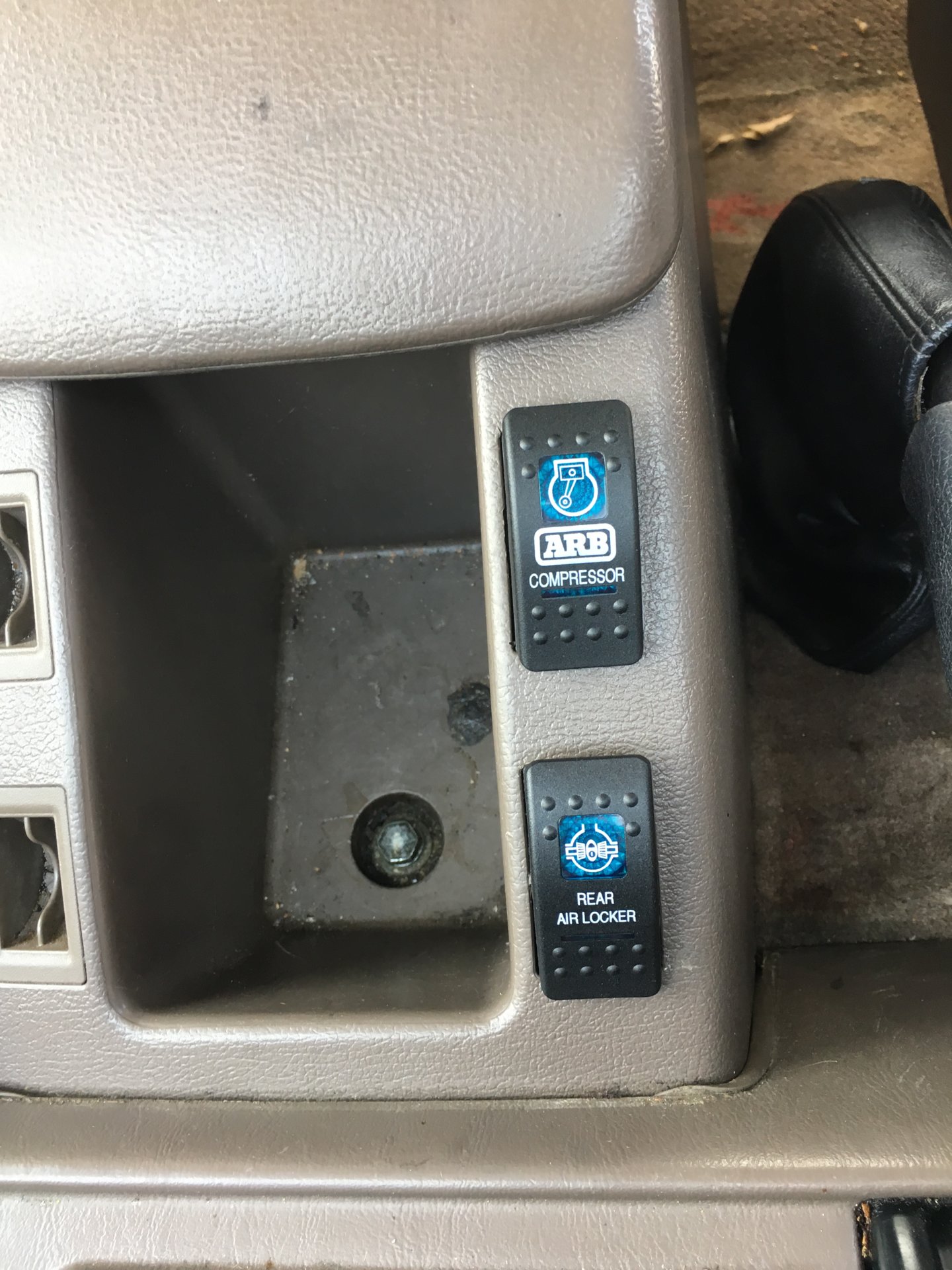 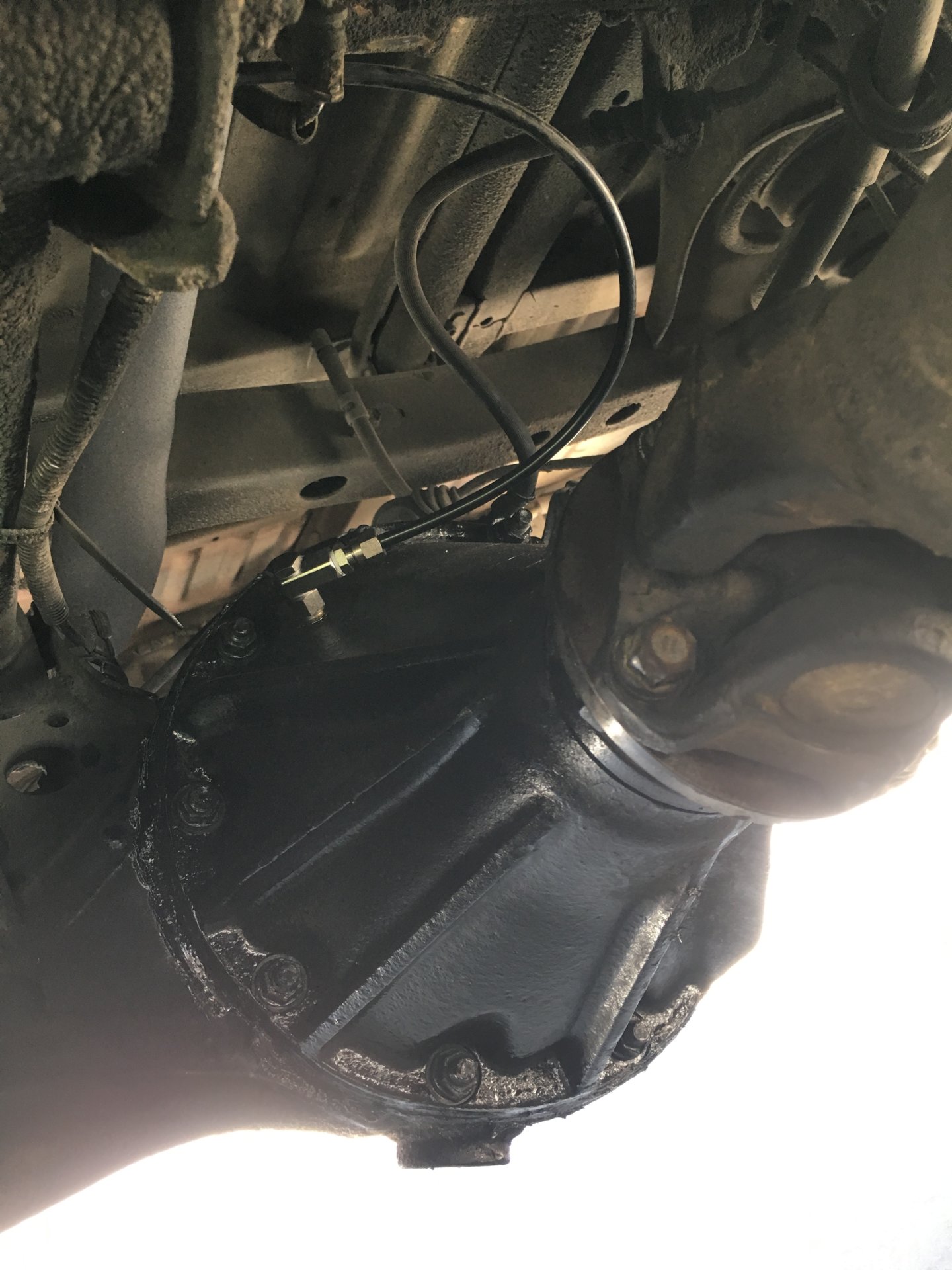 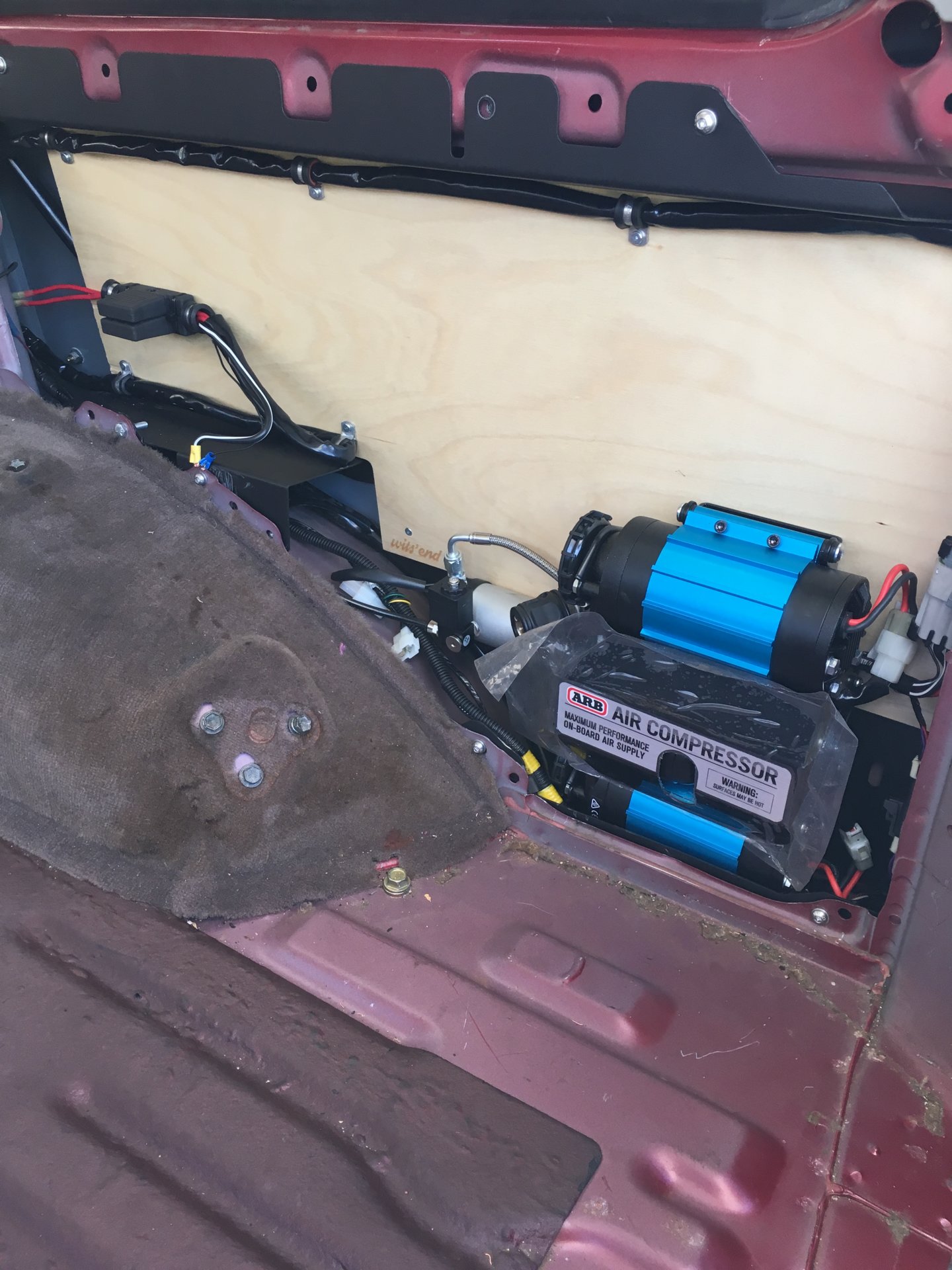 Today I put baking powder on the carpeting and seats to get the smell out of the car. As some have suggested I am going to let it bake in the sun for a day and then vacuum it out. Hopefully this will give it a cleaner smell. Really happy to get the re-gear done. I actually meant to get the wheel bearings done at the same time and forgot to tell the mechanic to do it. When I got the parts back I had four packs of Nitro Gear wheel bearings unopened. I am going to kick that can down the road for now. Now just waiting for the suspension to be ready to get it installed. Have it scheduled to go in on July 22, but am hoping to get it in sooner if the suspension is ready.

Tomorrow Death Valley Paul is coming over with a different hood that has less paint failure from the sun than my current one has. I am hoping to get it to a paint guy a couple of shops down from Goose Gear to give it the clay bar treatment and try to restore the paint to its original luster - or as close as it can come to that.

I'm dreading having to remove the ARB compressor that I just had installed. I need to take it out, plus the Wit's End quarter panel to remove the fender flare. I am going to have those Linexed.

The paint fade on the rear-view mirrors are too far gone and look like faded plastic now. I think I am going to remove those and have them painted a matte black. That way it will match the rims and the fender flares.

I am still having trouble locating a right front fender in ruby red. The one on the GG 80 is damaged and has a couple of drill holes where the prior owner had likely put screws in to do a hack job of body work. I'll have to live with it for now. I have the feeling it is going to take a while to find the fender in ruby red. There is someone on the forum who has one is South Carolina (I think?) that he is parting out. However, he hasn't responded to me (or to anyone else) since March. Of course the photos he posted only show the driver side of the car. Isn't that always the case?

I've gotten a little over 200 miles done on the 500 mile run for the gear oil. I was a little perplexed

when I told my mechanic that I would be back in 500 miles and he replied, "That's probably a good idea." Probably a good idea? He's working and learning from his dad, who owns the shop. His dad knows this for sure. This is enough for now.

I ordered the Wit's End panels for the center console today. I was sick of looking at the bolt every time I put something in it. It looked too incomplete to me. Hopefully it will come next week and I can get it installed. I am enjoying the process of repairing the years of neglect on this from the prior owner. Tomorrow I will have a lock smith come over to repair the lift-gate lock. It does not work currently. I am also going to have him re-key a door that I am swapping in for the currently damaged one to match the car. Finally I am going to have him cut another Toyota key for me. I have the blank ready.
Last edited: Jul 5, 2019

While I'm waiting to put the new shoes on I thought I would rattle can the center caps on the stock rims to make them look better. This will help when I go to push them down the road in about a month. 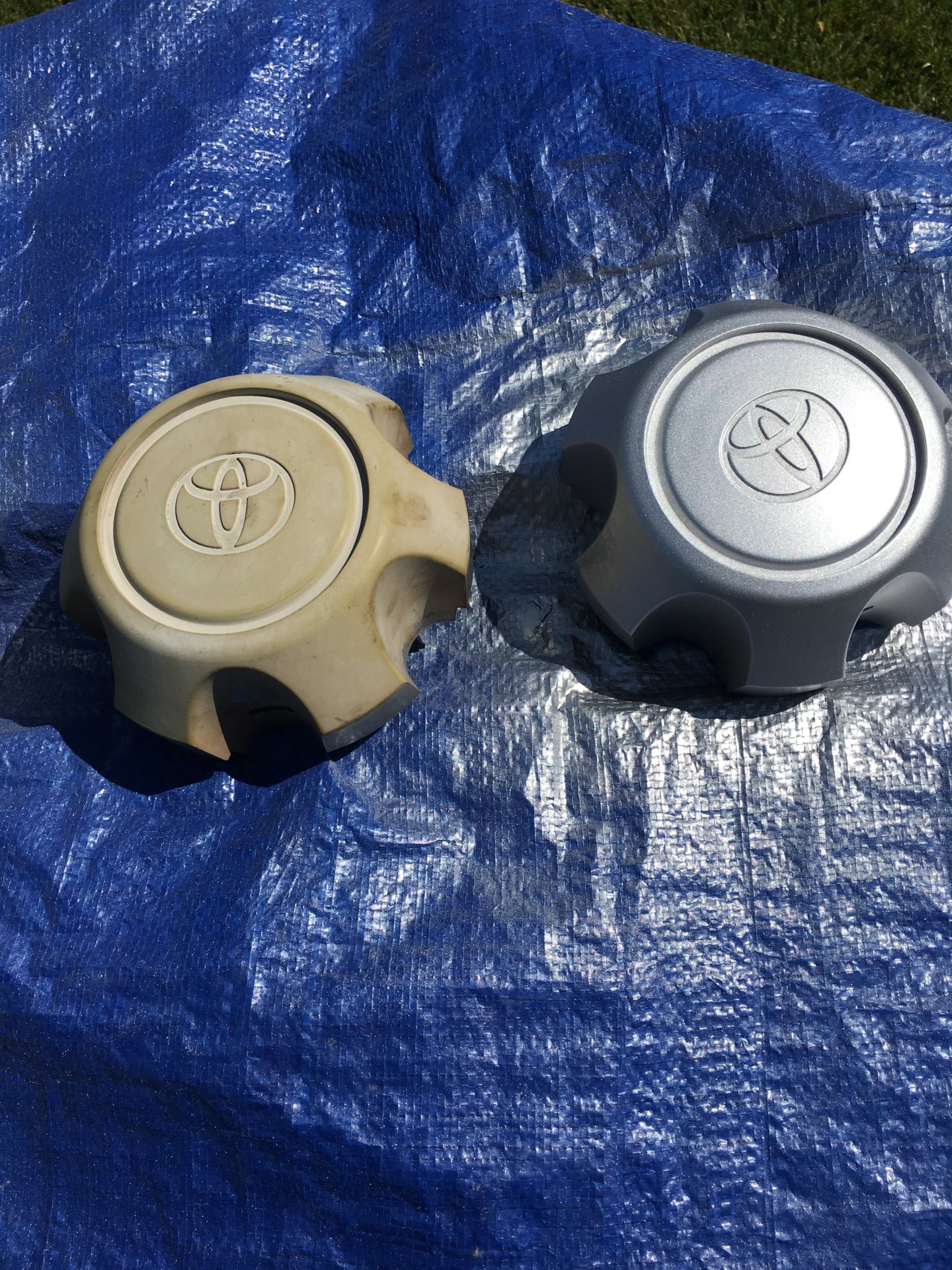 Here's a pic of the GG 80 with the center caps rattle canned. 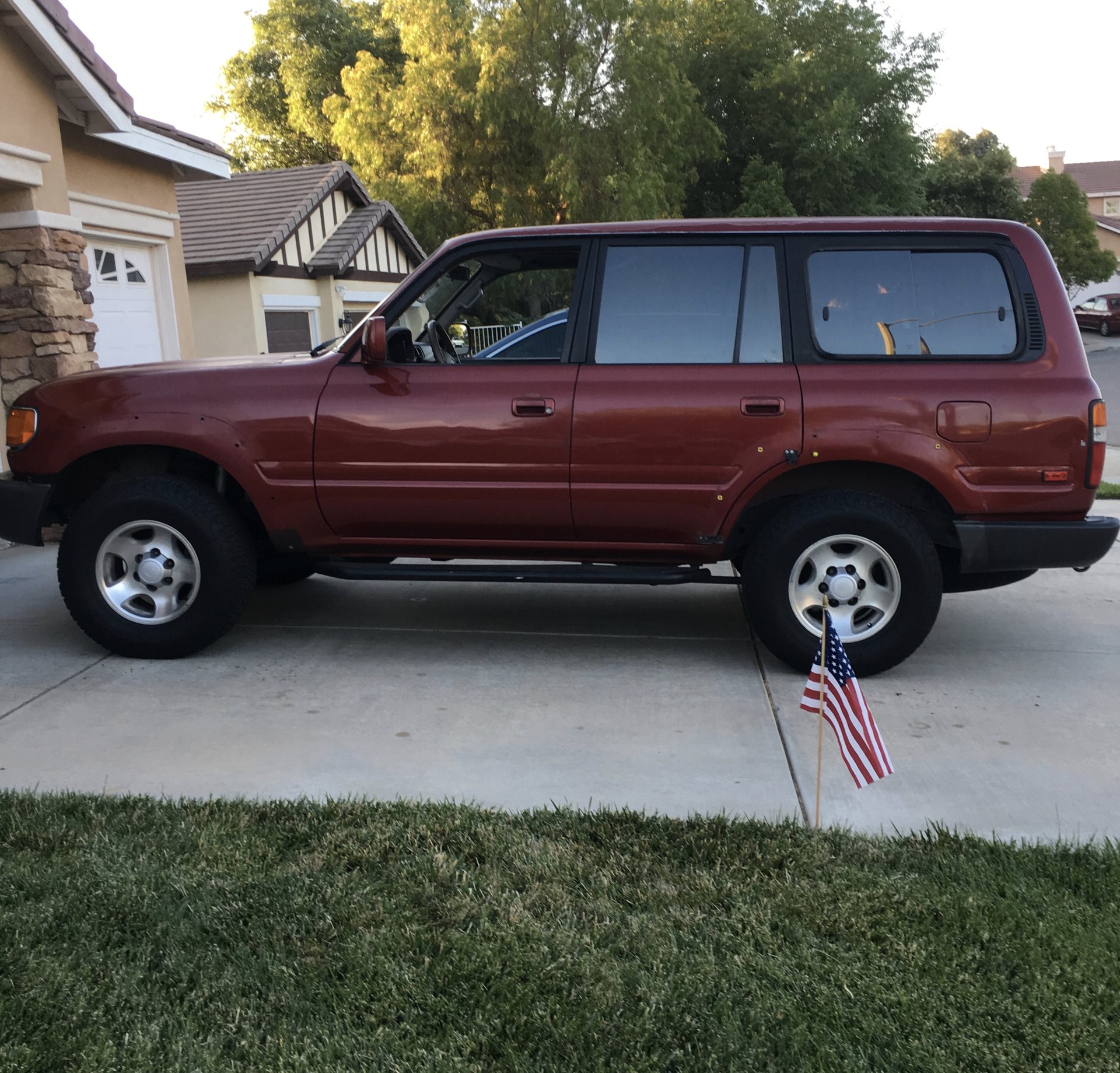 I finished taking off the fender flares today. I need to pick up a couple of fender flare pins as they broke off while I was taking them off. I need to replace the rear quarter flare on the passenger side. One of the tabs that holds it to the body of the vehicle is about to completely break off. Death Valley Paul is going to check if he has one for me. Luckily for me I will be getting these coated in Linex this week, so color is not important.

I also broke one of the internal tabs on one of the front flares and don't want to replace the whole thing. I am trying to figure out how to secure it to the flare. There is no glue out there that I know of that can glue plastic effectively. My only thought right now is to Gorilla tape it in place. Not the best solution. If anyone has a better idea let me know. I would appreciate the feedback. 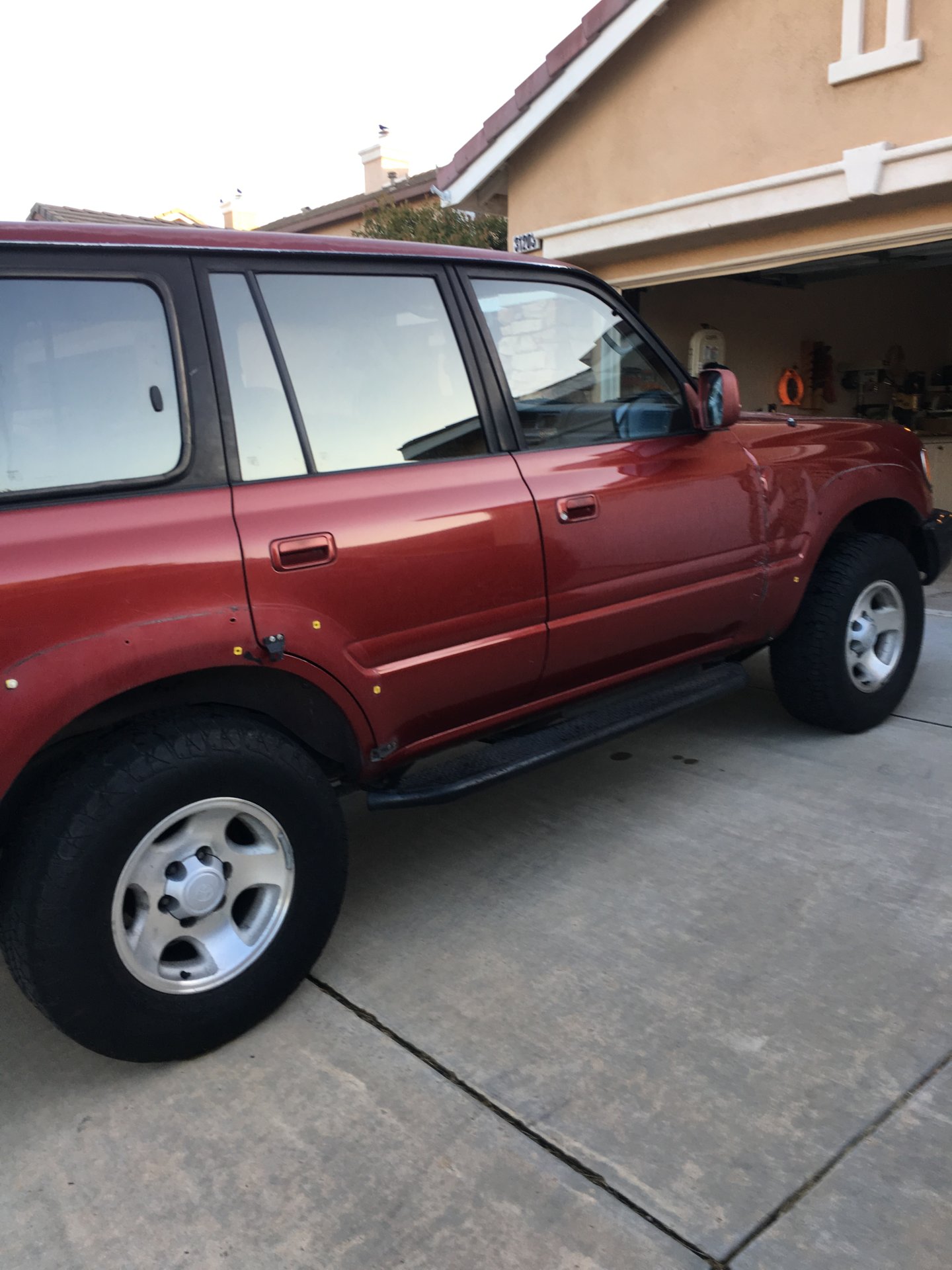 I finished taking off the fender flares yesterday. It was less work than I anticipated. I thought I would have to take out the Wit's End quarter panel to access the flare nuts behind them. I only had to remove it partially. Unfortunately, I removed all the connectors to the ARB air compressor and when I reconnected them it is no longer working. I didn't spend anytime to get it back up and running. When I get some time I'll fiddle with it until it works again. I will be having the GG electrical guy install my secondary batter system and will have him fix that, if I haven't 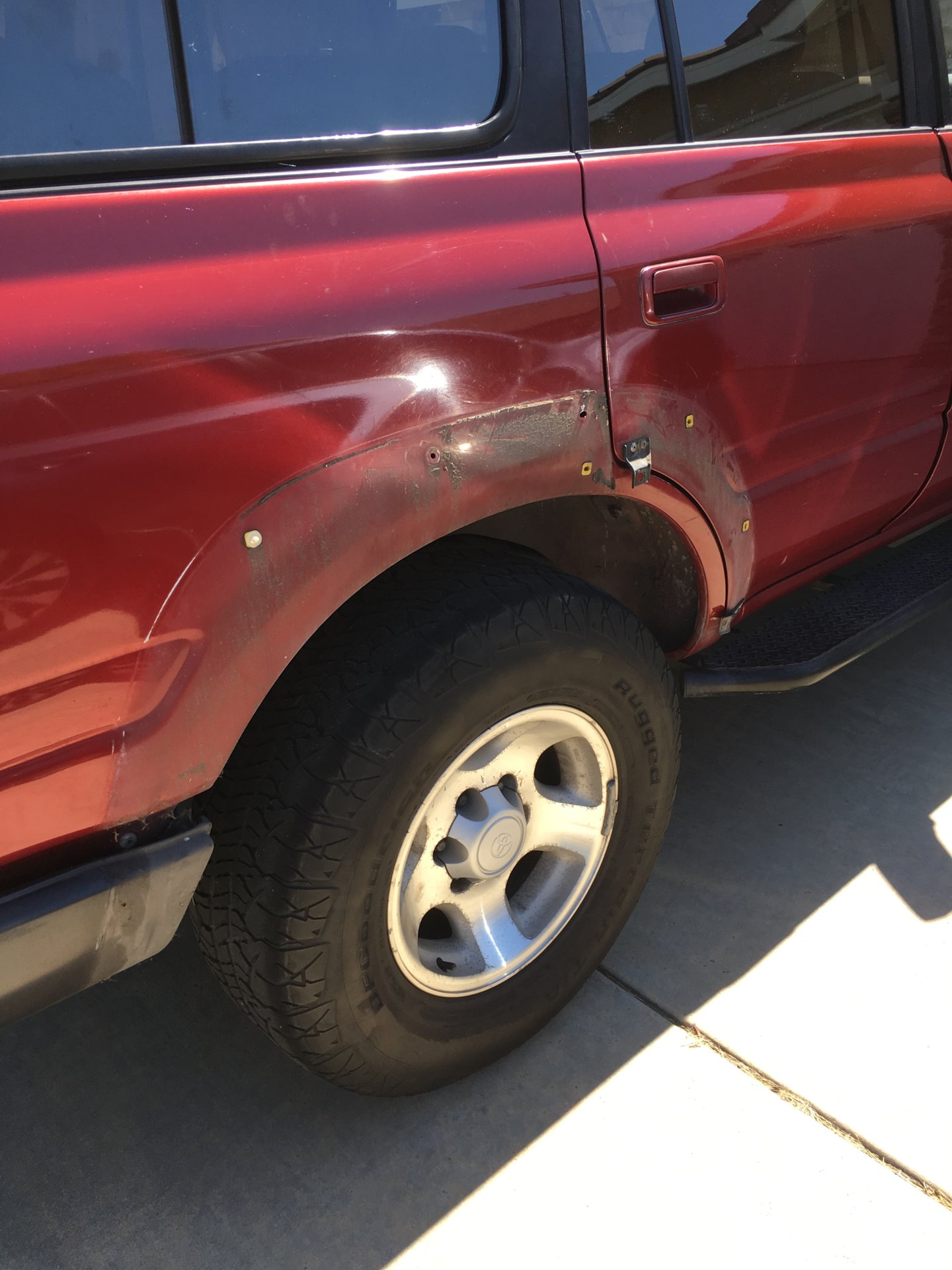 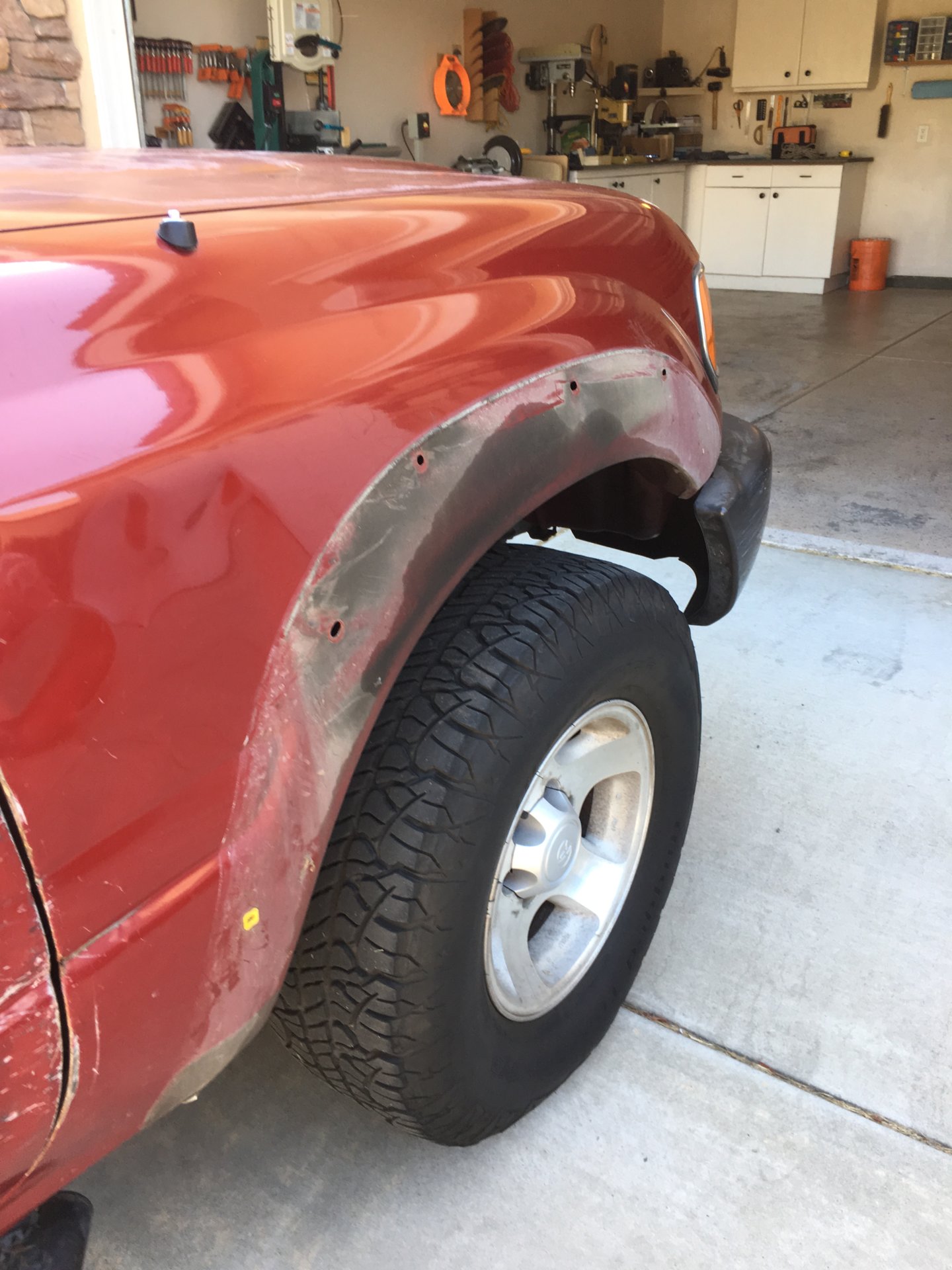 I discovered, unfortunately, that one of the fender flares had a broken mounting bracket. The prior owner's solution was to use lots of Liquid Nails (or its equivalent) to hold it in place. Now I have to figure out how to repair it. The top of the bracket is held by two plastic forks that are each maybe an eighth of an inch wide. One of those is now broken. To say it's precarious is an understatement. 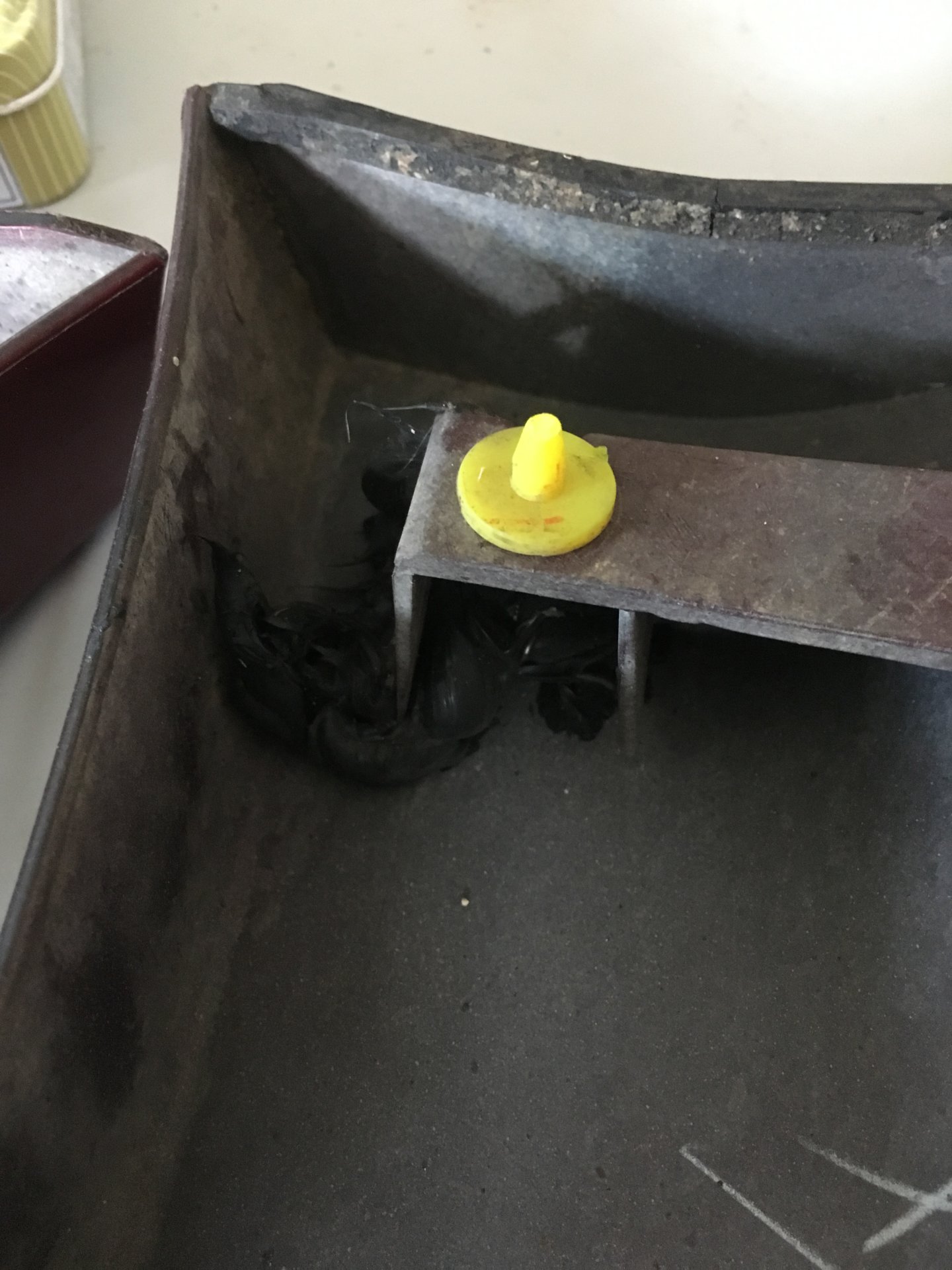 For good measure, I also broke one the tabs in the removal process...

I ordered some JB Weld plastic glue and am hoping that will work well enough. 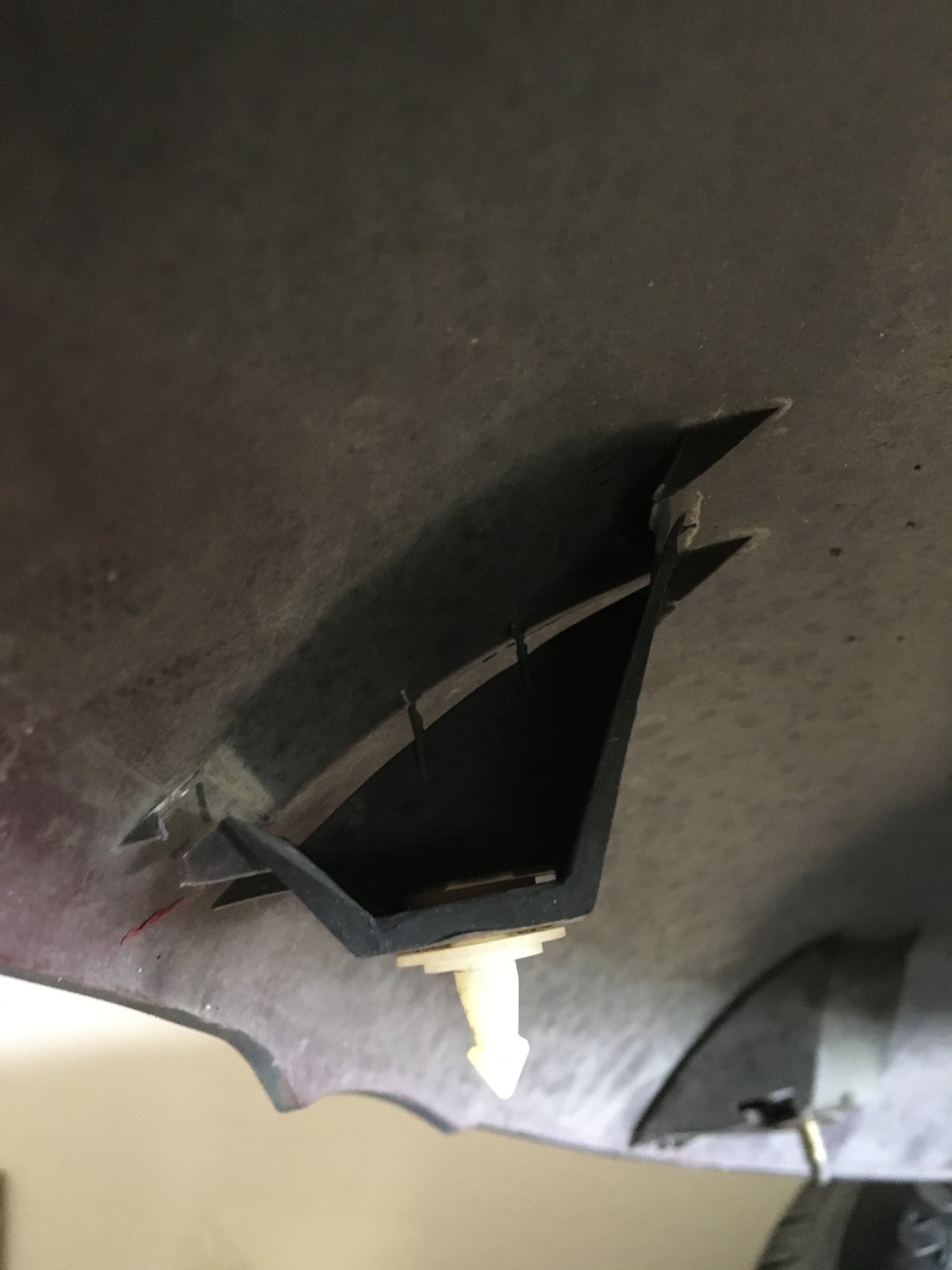 Cleaned up the fender flares to get them ready. I pealed off the rubber adhesive that the prior owner had used. Will see if the JB Weld plastic glue works. Want this done prior to getting Linexed. Hopefully this works. I have been looking for a good plastic glue for sometime. 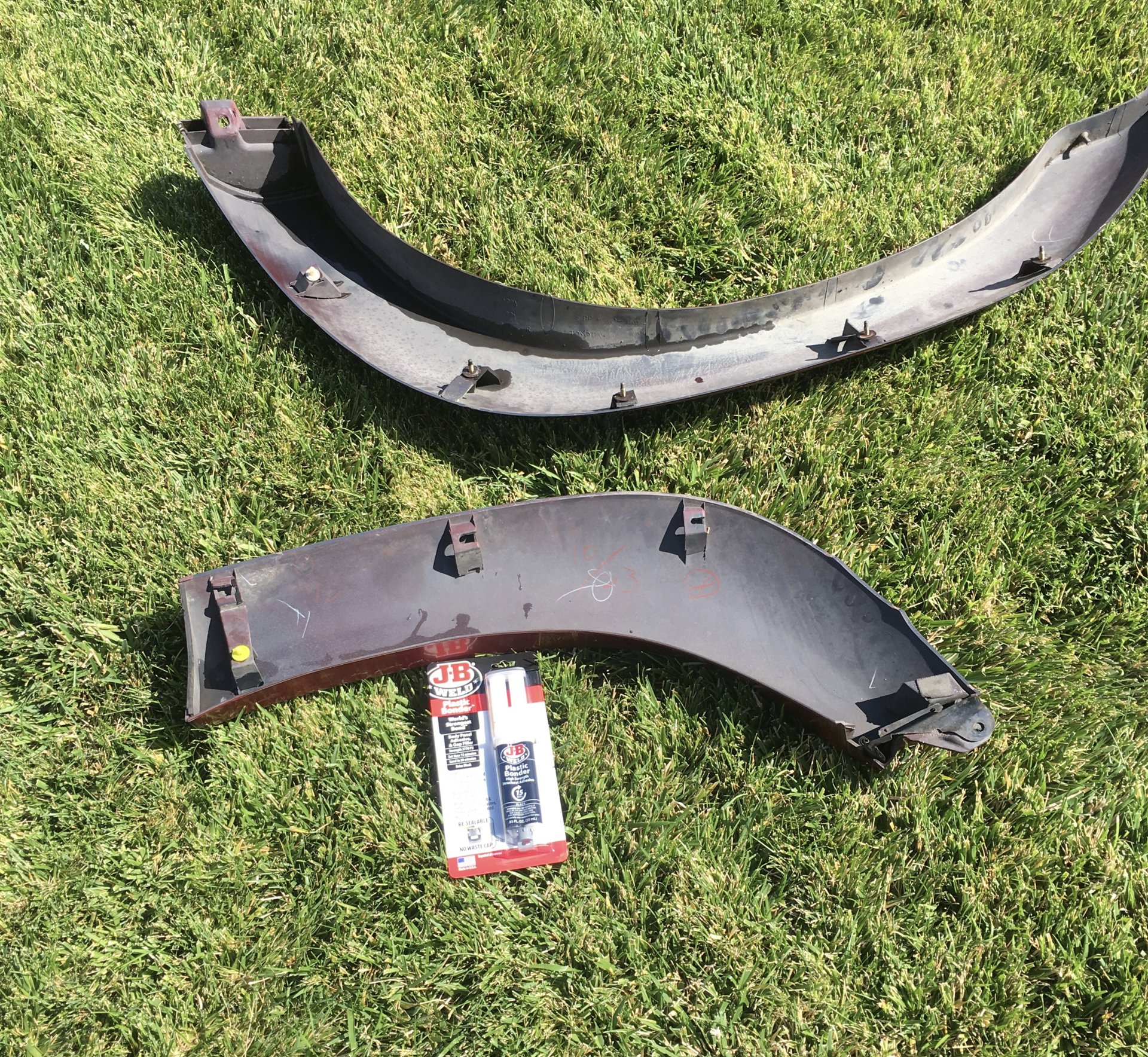 The 80 is off at JBM Motoring getting the second battery installed as well as running wire to soon to be sleep platform in the back. There will be four always hot USB ports back there to keep the iPad, iPhone, and Apple watch powered. In the front I am adding one always hot duel USB port that will be mounted in the center center console. Using Blue Sea 4.6 amp USBs for quick charging when needed. In the mean time I took the fender flares to Line-X to have them coated. Picked them up yesterday and mounted the one rear quarter panel on the passenger side. I needed to do that before sending off to JBM so I could re-mount the Wit's End quarter panel. The fuse block will be mounted to it.

While I was waiting I installed the flare pads to the remaining fender flares. It was a good thing that I bought five of them, because I put the first one on backwards and had to remove it. I will have to order another one. I wanted to have a spare so when I find a matching fender to replace the currently damaged front driver side fender I would have it available. The flares are going to look good on the 80! 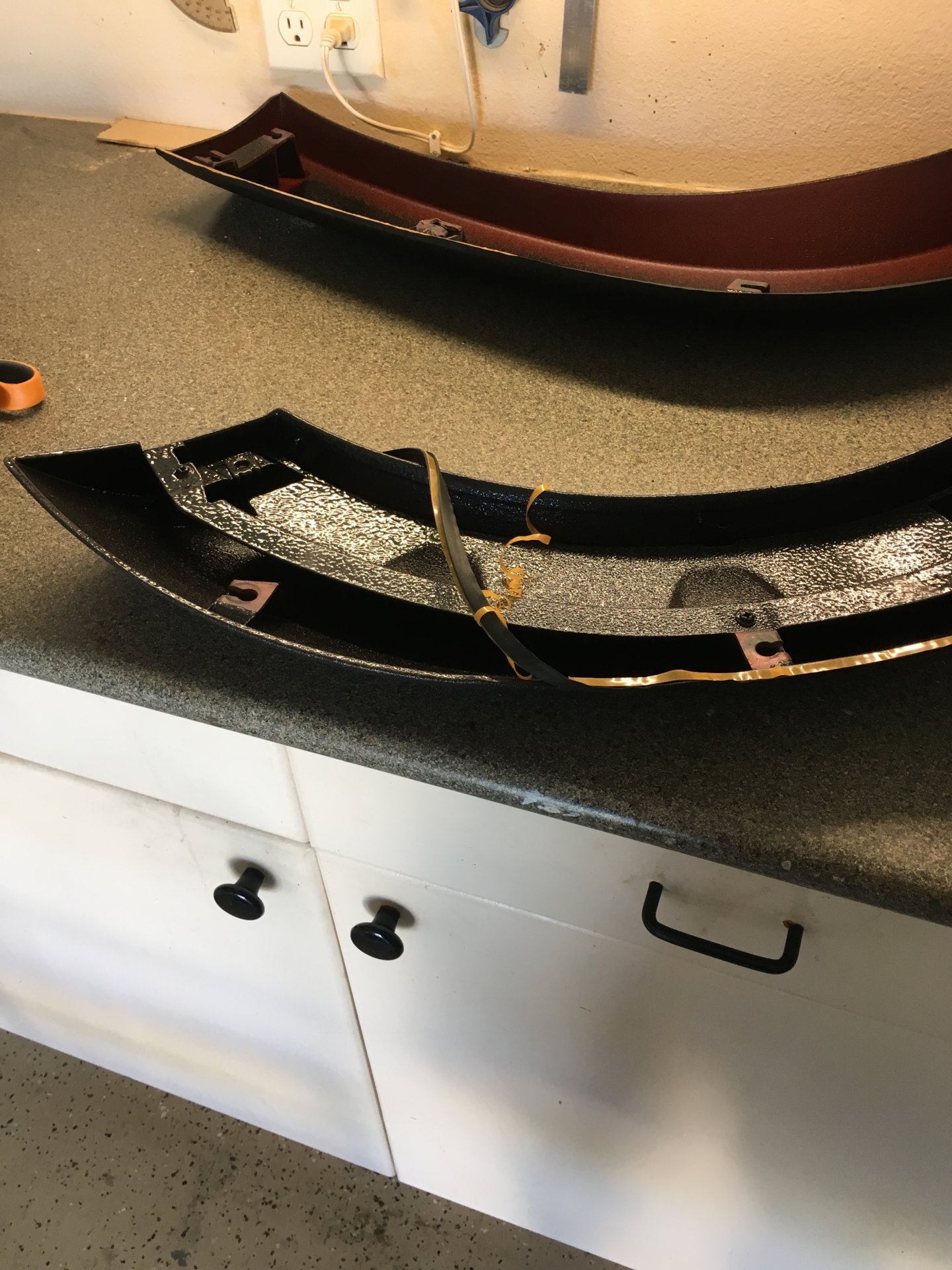 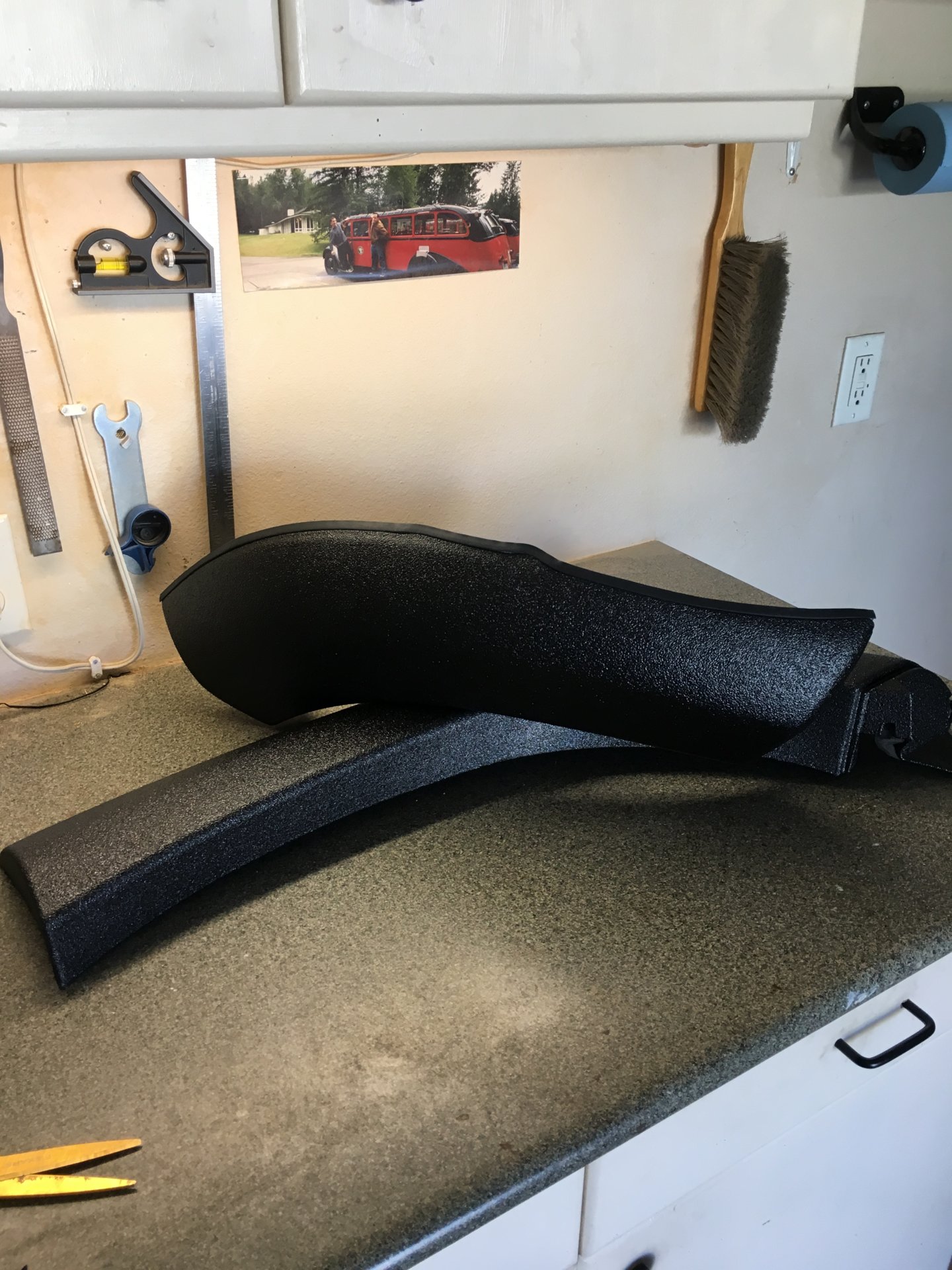 Things are going to be moving pretty quickly on the build now. Tomorrow I will be picking up the Stage 3 suspension from Icon Vehicle Dynamics. On July 22 I will be delivering it and the 80 to Demello Offroad to do the install. After picking up the suspension I will be going out to Goose Gear to pick up the order from Slee. Need to deliver the battery tray to JBM to complete the auxiliary battery install.

The package from Slee Offroad has arrived. They have been great to work with. Dropped off the battery tray and washer fluid relocation kit at JBM Motoring to continue working on the auxiliary electrical system. Brought home the rock sliders and belly plate to install in about a week. Need to go up to Icon and pick up the suspension on Monday. 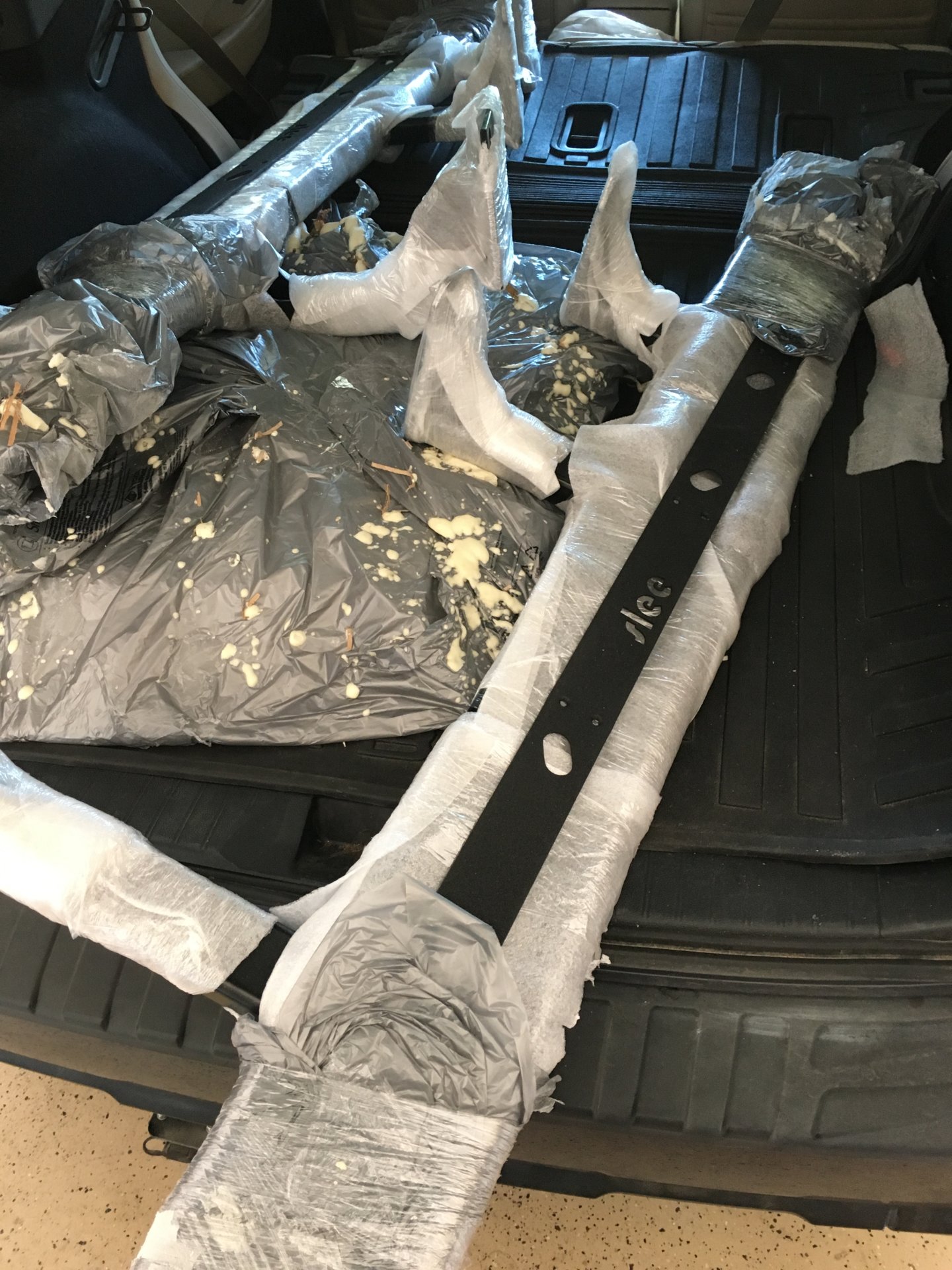 Picked up the suspension for the 80 today from Icon Vehicle Dynamics. Next Monday I will take it to Demello Offroad to get installed. It will be nice to get this thing out on the dirt finally. 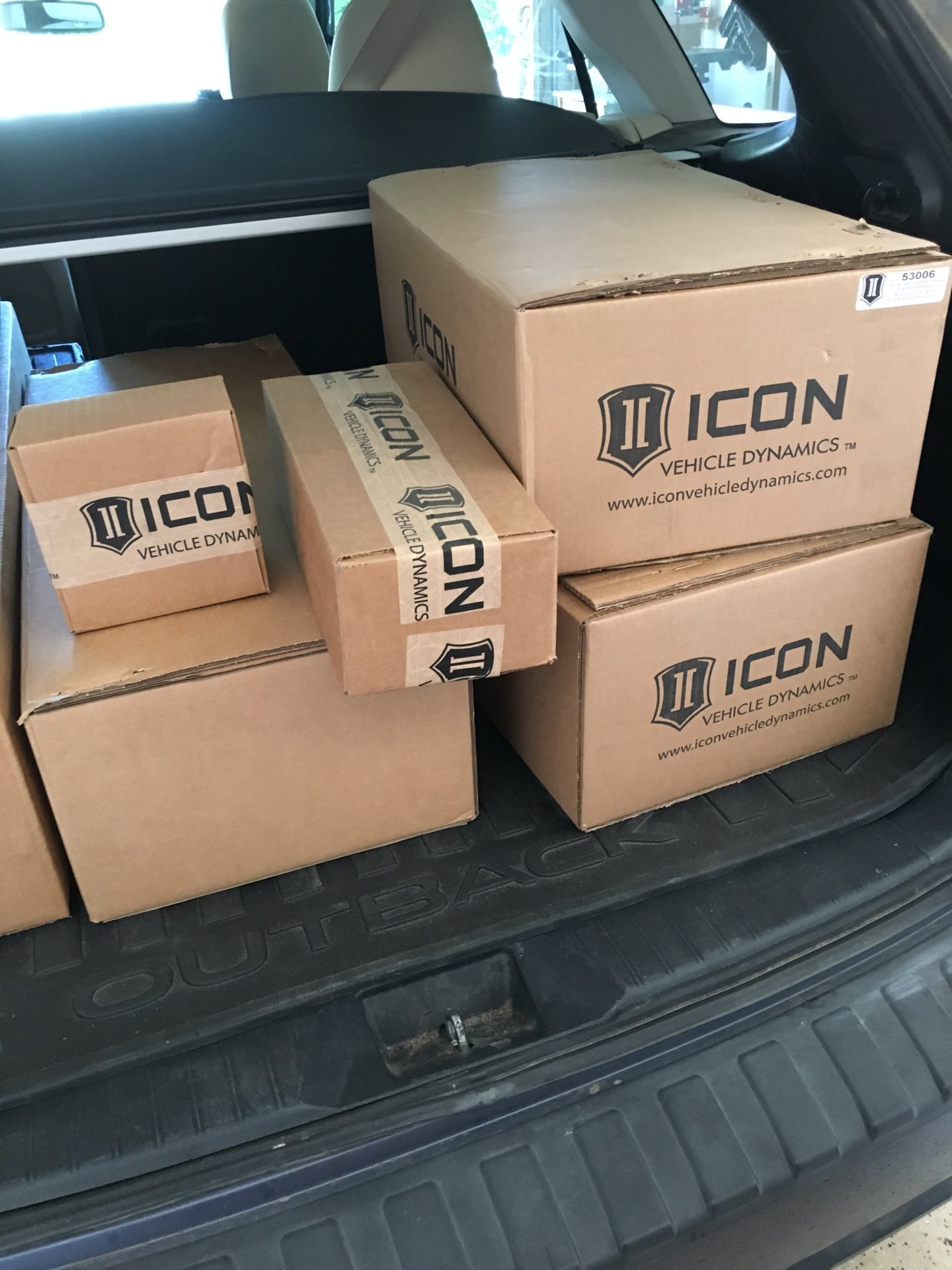 Well this happened... It seems it may be the fuel pump went out on it. Got to a left turn signal and the 80 stalled out and now will not turn over. This is the joy of buying a new to you vehicle. Things are going to go wrong. I was happy it happened now. Going to be doing some serious overlanding in Colorado in a couple of weeks. Better that it broke down now and not then. 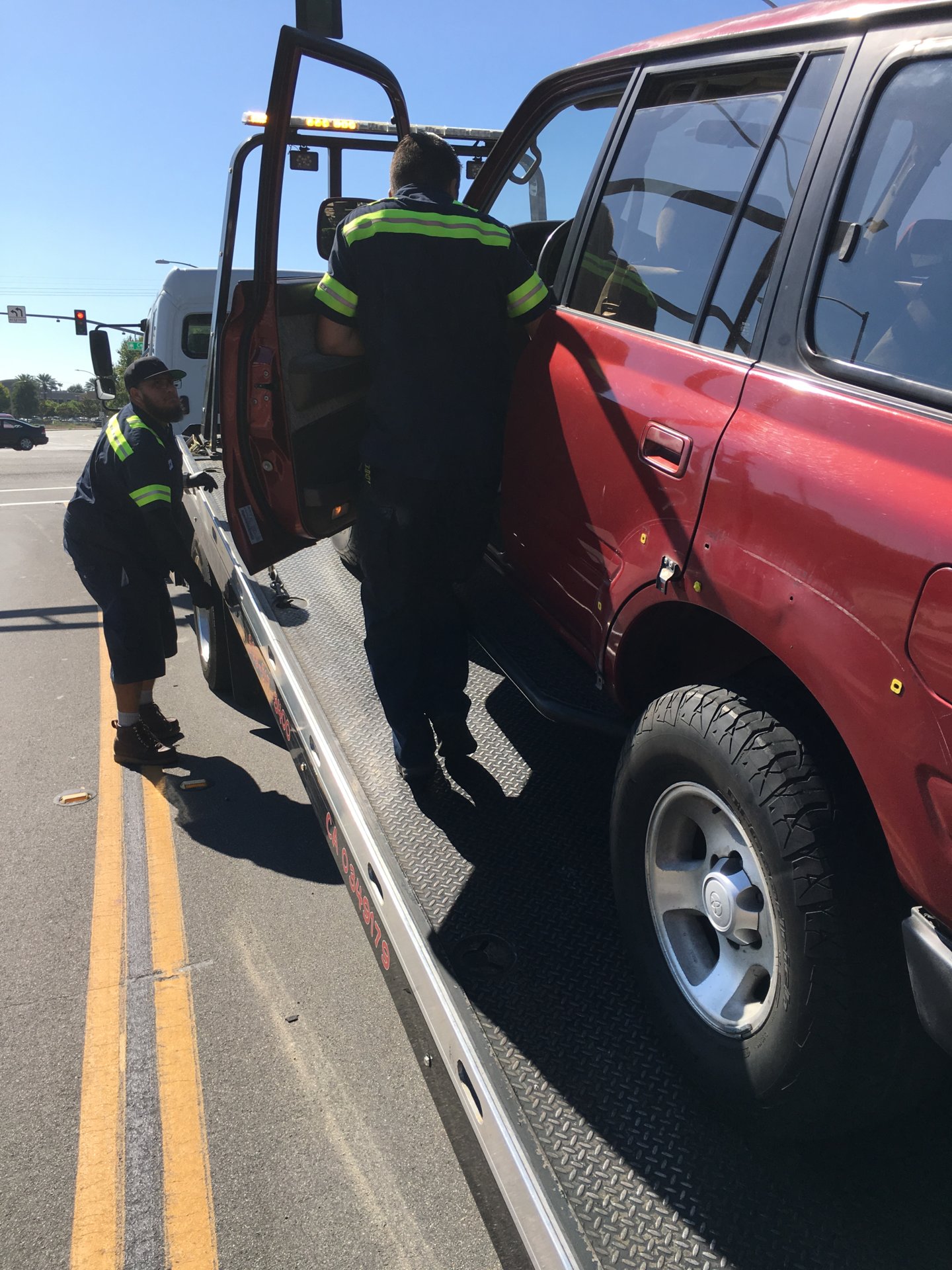 Heard back from my mechanic. The fuel pump was fine. It was the spark plug wires plus the distributer cap that were bad. Also discovered that I needed a rotor replaced. Should get it back this afternoon.

Need to get it back to JBM tomorrow. They still have about four hours of wiring to do on it. Will leave it with them for the day and hopefully get it back finished. Then it will be off to Goose Gear on Saturday and Sunday to do the interior install and finish the electrical. This will likely go into next week. However, Monday and Tuesday are blocked out for the suspension install. Will have to finish it up after that.

Got the Goose Gear system installed. Still need to get the electrical completed. Right now the GG 80 is at Demello Offroad getting the Icon Stage 3 suspension installed. will be picking it up tomorrow. This picture was taken before the second row seat delete was installed. 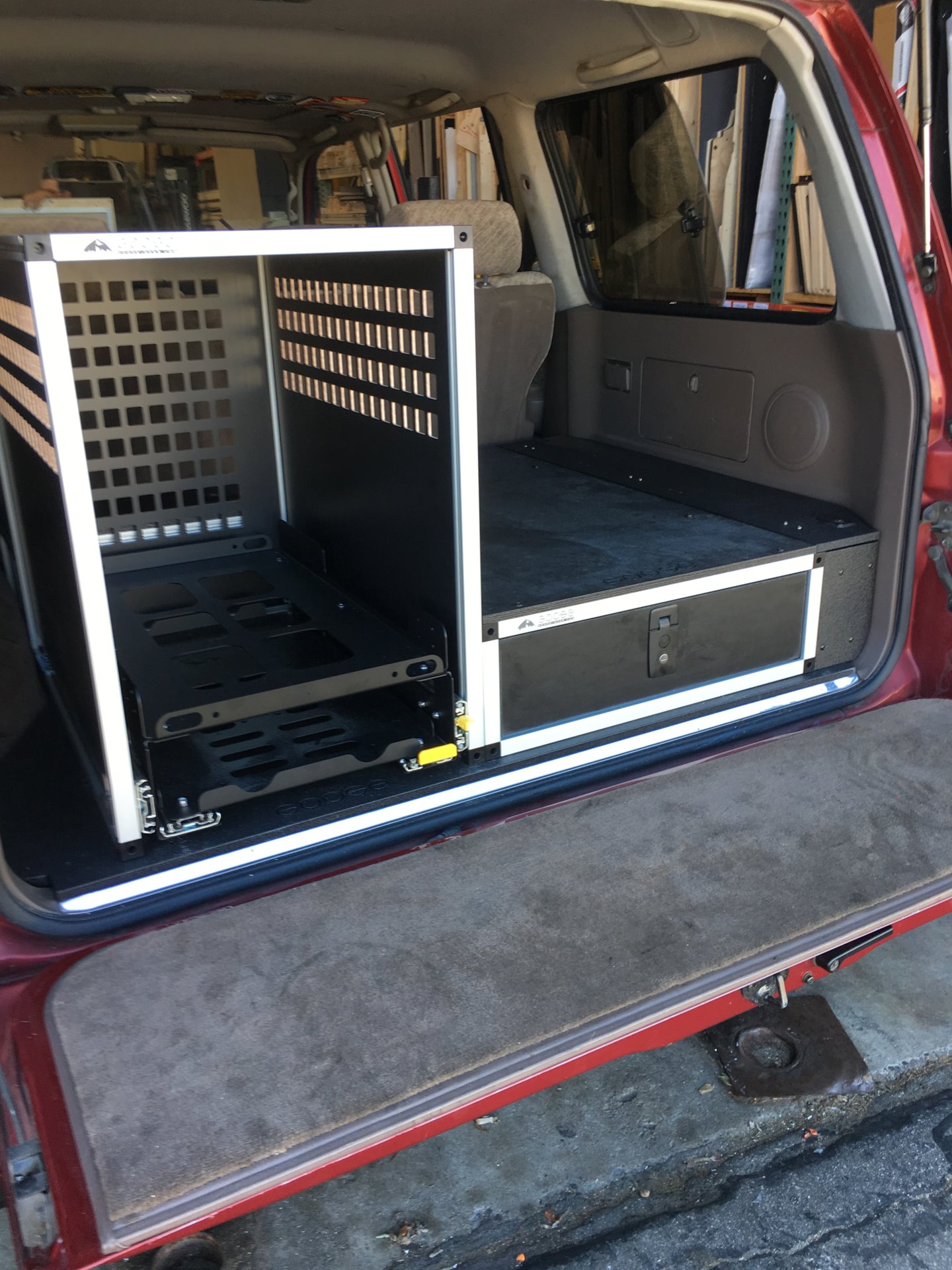 looking good! loving the upgrades and the aggressiveness of this build

Here she is with phase 1 almost complete. Just need to get the electrical done. That's happening as I type this. I really like the look of it. 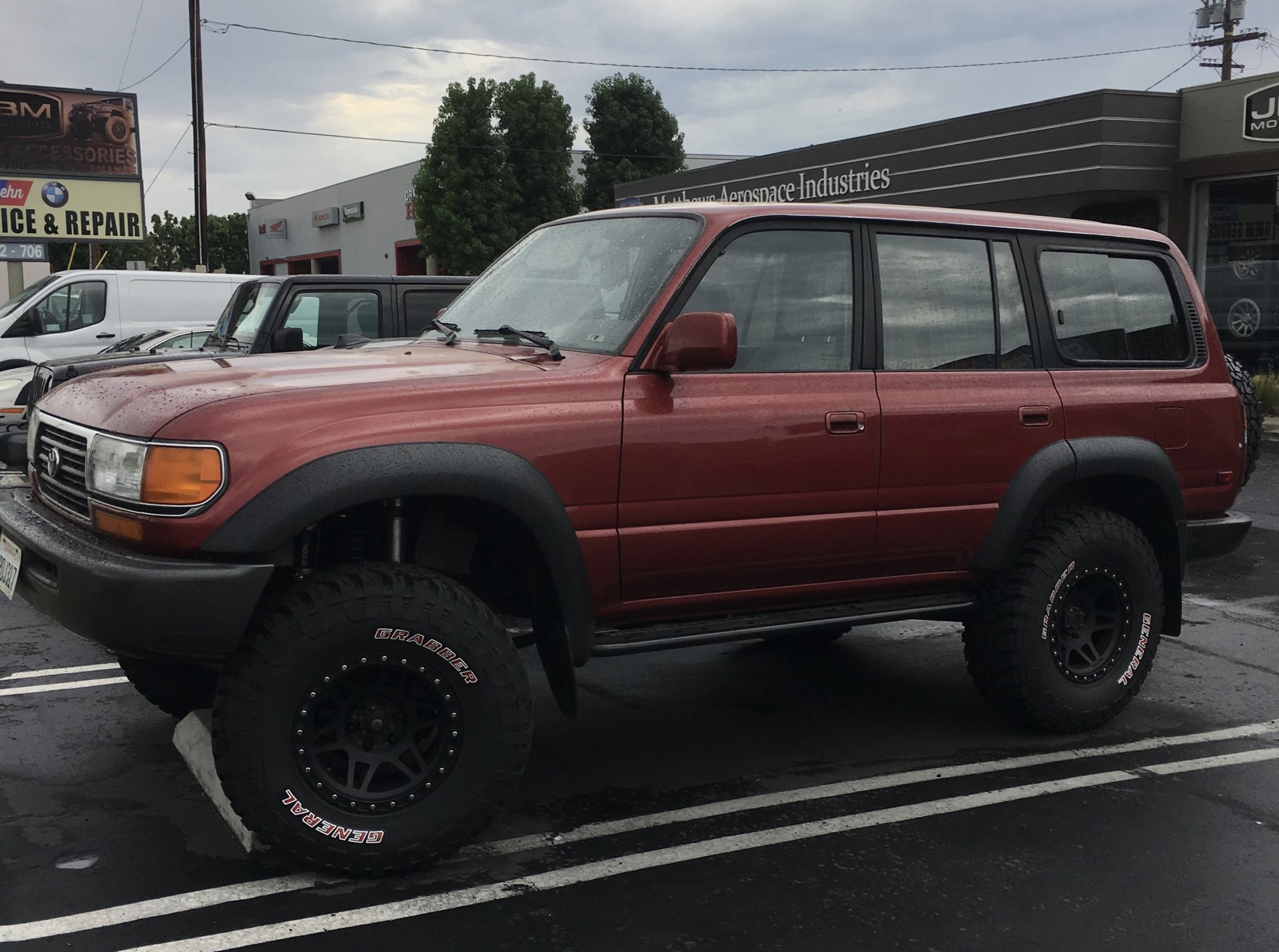 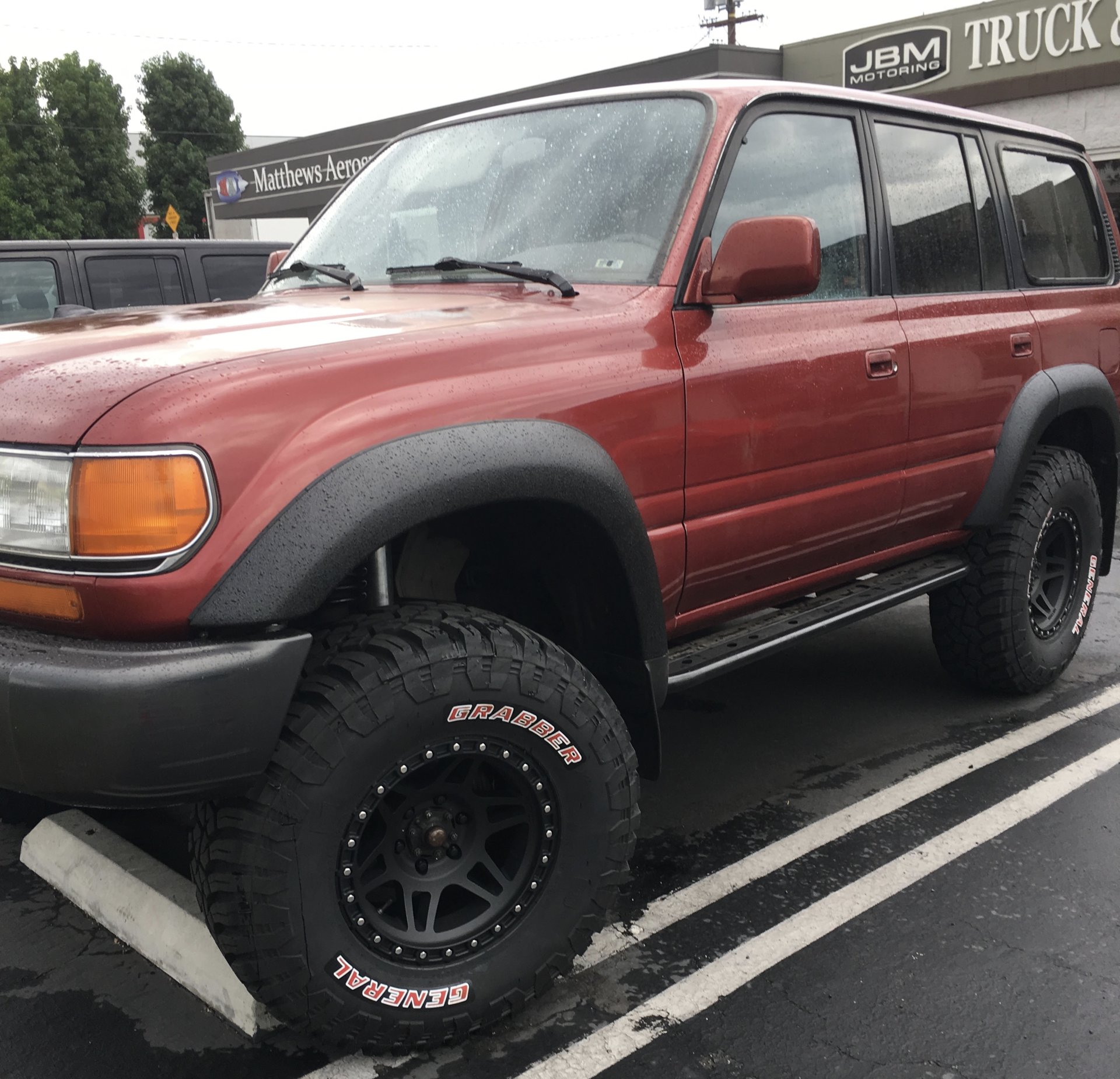 meeceboy78 said:
looking good! loving the upgrades and the aggressiveness of this build
Click to expand...

meeceboy78 said:
looking good! loving the upgrades and the aggressiveness of this build
Click to expand...


Thank you. I won't lie, it has been stressful getting phase 1 of this build done so quickly. Trying to get everything coordinated and keep the ducks in a row has been a lot of work. I am looking forward to getting out in the dirt. Heading to Rocky Mountain Overland Rally in Colorado on Saturday.
You must log in or register to reply here.
Share:
Facebook Twitter Reddit Pinterest Tumblr WhatsApp Email Link