Gecko gets some mods

alright, bunch of points to hit on.

Yes I do remember threading in from the backside and I think you're absolutely right about them working loose BUT if (and only If) the bolt hole is threaded, if the hole is not threaded and the bolt/nut works loose then it should be pretty easy to determine.

If you remember I replaced all of the diff studs on my rear axle with G8 bolts (3/8" I think) to replace the factory studs and made damned sure I welded the head to the flange. It was a pain in the arse but so far that's been very successful and plan on doing the front on my new axle housing.

Your recollection of the stud having differing threads is correct. I cant remember exactly right now but I believe the knuckle side is M12x1.00 and steering arm is 1.25 pitch with the shoulder in b/w as you mention. There's a pretty good thread on pirate somewhere about the clamping forces of studs/cone washer/nut which is pretty informative but the short version was that particular setup is far stronger than just about any other option.

The bolt configuration would also work well I suspect but as you described there's very little real estate inside the knuckle.

So, If I'm reading your last paragraph correctly you're planning on using a screw type (see below) configuration which would put the total load on the knuckle threads ONLY. It has been my experience that the knuckle threads tend to strip fairly easily followed shortly behind by the nut stripping. Obviously, if the knuckle threads strip the knuckle is either toast or will require a larger hole/tap and thus would be a last choice. 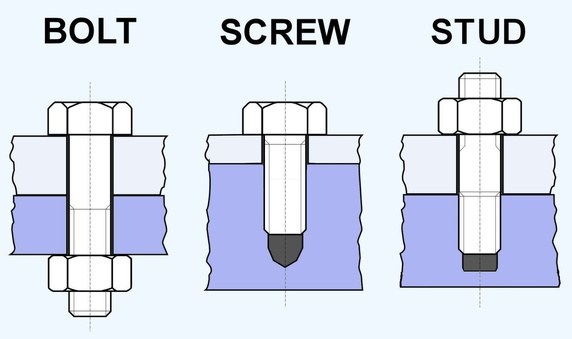 All that said and what I think is probably the final and maybe best option is to use a D44 Knuckle stud setup. It's the same configuration as Toyota only much larger at 9/16". For about $100 you can get the hardware and then will have to buy/borrow/steal a reaming tool to drill out the steering arms to the correct size and pitch.

The one thing that diagram doesn't cover that is a very important difference in my plan is that my "bolts" will still have cones that seat into the steering arms mimicking an OEM setup. Essentially my setup will put all the stresses of the factory setup in the same places. It's just that my stud, cone washer, washer and nut will all be in one piece instead of four. All the tension that would normally be pulling on the knuckle threads will still be the same. The difference there is that there won't be a shoulder to bottom out when threading my lug studs into the knuckles. As a matter of fact, I think my setup may actually make use of MORE threads than a standard stud. Now that I'm picturing it, I will attempt to get studs that are long enough to stick out inside the knuckle some: short enough to not interfere of course, but long enough that if I ever do have an issue and break a lug I can remove the broken piece(s) from the inside with pliers rather than having to drill or extract them.

By my guess, the ultimate result is that all of the vertical stresses on the arms and threads will be the same as before (just much easier to R&R). Lateral stresses on the bolts will be zero or negligible due to the keyed design. All that being said, I see no need to upgrade to 9/16 hardware. Just a lot of extra work that also causes you to have to be self-reliant for trail repairs since 99.9% of other people's parts bins are going to be Toyota-specific sizes. Doing that would be counter-effective to the idea of using the lug studs anyway, which came about from making the whole knuckle stud MORE simple.

Isn't the primary failure mechanism of the studs under normal trail abuse the shear placed on them because they are holding the arm/knuckle both together and transmitting the turning forces from side to side? So by going to the machine fit between the new knuckle and arm setup the shear forces are being reduced to near zero because the arm now will transmit the turning force via the machined interface? If so, then the stud, lug nut, bolt, etc is now only responsible for clamping force, and as such the same size fastener should now be capable of much higher loading in the single plane that it now acts in almost exclusively, right. I'm not sure what the failure rate is for "pull-out", but I would suspect that any such fastener should be able to provide the clamping force alone to do the task at hand. The threads inside the knuckle itself should be the failure point if there is one moving forward, not the fastener.

Think of it like a SF axle shaft vs a FF shaft in a LC. SF shafts are heavier/ larger because they both carry vertical load and transmit torsional load, FF only transmit the torsional loads, so they can be smaller from a cross-sectional standpoint. By that logic the same stud that used to do 2 jobs that is now only doing one should in theory do a better job clamping down alone then turning and clamping.

My point, if there is one, is that I don't know that it matters what fastener you use, either should be more then sufficient to hold the two pieces together and let the machined interface do the heavy lifting.

P.S. when do the 3-link fab pictures start.

Matt, you are spot-on in every word you said. That's exactly the point I was trying to make. My only concern now is keeping the new one-piece "studs" tight. I have some Steve-style ideas brewing for that too.

The 3-link hasn't even begun yet. I have about 80% of what I need, but too many other irons in the fire right now to start that. Gotta get a few things finished up first since I'm sure the Gecko will be immovable for a while once started and it'll be taking up my primary bay in the shop. The other bay isn't suitable to leave vehicles long term because it impedes access to my tool box and my front door.

I picked up a mildly built 60 and a car trailer on the recent trip to Cali. The 60 needs a lot of little things to become daily drivable and sellable. The car trailer needed a lot and I'm almost done with it finally.

You're both right in that the machined surface will take most of the load when turning.

My primary point is that a knuckle stud is only torqued to 20-30 ft/lbs into the knuckle and then the nut/cone-washer (which supplies the clamping force) is torqued at 85-100 lbs. If you use a screw I would then conclude that you're only going to get 20-30 lbs of clamping force holding the steering arm on.

If it were me I'd stay with a tried and true stud/cone-washer/nut setup of for no other reason that peace of mind.

Just weld the thing to the knuckle and be done with it.

Just weld the thing to the knuckle and be done with it.
Click to expand...

. Haha. Lemme think about that for a.... Nope!
I don't have the skills or the proper materials to weld forged steel to cast steel anyway. Tried that about four times on the Rubicon a few weeks back and it never worked.

You know if you could get the steering arm and knuckle made as one unit and then have the trunnion bolt on like the bottom you would be golden. I am assuming this has not been done already or tried should I say.

Yeah, I knew you were [mostly] kidding. But I had to mention how we tried it on the 'Con and the result was that the cast knuckle kept breaking.

When you say "trunion bolt on", you mean the king pin that's pressed into the steering arm? Because technically the steering arm and the bottom cap bolt on nearly the same way already. Only difference being that the lower bearing is lightly press-fit on the bottom whereas the top has the pin pressed and the bearing is more slip-fit.

The only real issue I foresee is that doing that would then mean that when you do break anything in the system, the ENTIRE knuckle would need replacing. It is a good thought though for sure, since it would eliminate a good portion of the hardware, all of which is the most frequently damaged part of the system.

TeddyBoy said:
My primary point is that a knuckle stud is only torqued to 20-30 ft/lbs into the knuckle and then the nut/cone-washer (which supplies the clamping force) is torqued at 85-100 lbs. If you use a screw I would then conclude that you're only going to get 20-30 lbs of clamping force holding the steering arm on.
Click to expand...

So really the lower is tensioned until the shoulder provides enough resistance that 20-30 ft/lbs is reached. If you then tension the upper nut to 100 ft/lbs, the physics of linear tension acting on the same plane (the stud) should result in the 100# force overcoming the 30# force, and the whole linear plane ends up resting at the higher force of 100#. A simpler example would be to take a bolt and a nut and tighten only the nut to 30#. Then tighten only the bolt to 100#..... Is the nut still only torqued at 30#? (ignoring friction as a factor)

In short, when referring to a single line (plane/stud) whatever end has the higher torque value, that value will be the overall torque.

@4xsteve
Ruff Stuff has a sell going on now on their suspension kits. Didn't know if you knew.

FJCRAWLER said:
@4xsteve
Ruff Stuff has a sell going on now on their suspension kits. Didn't know if you knew.
Click to expand...

Seems like everybody has had blowout sales over the last few weeks. I've wanted to get some stuff but I don't actually know what I need until I get the truck torn down and everything I already have laid out.

Thanks for the notification though! 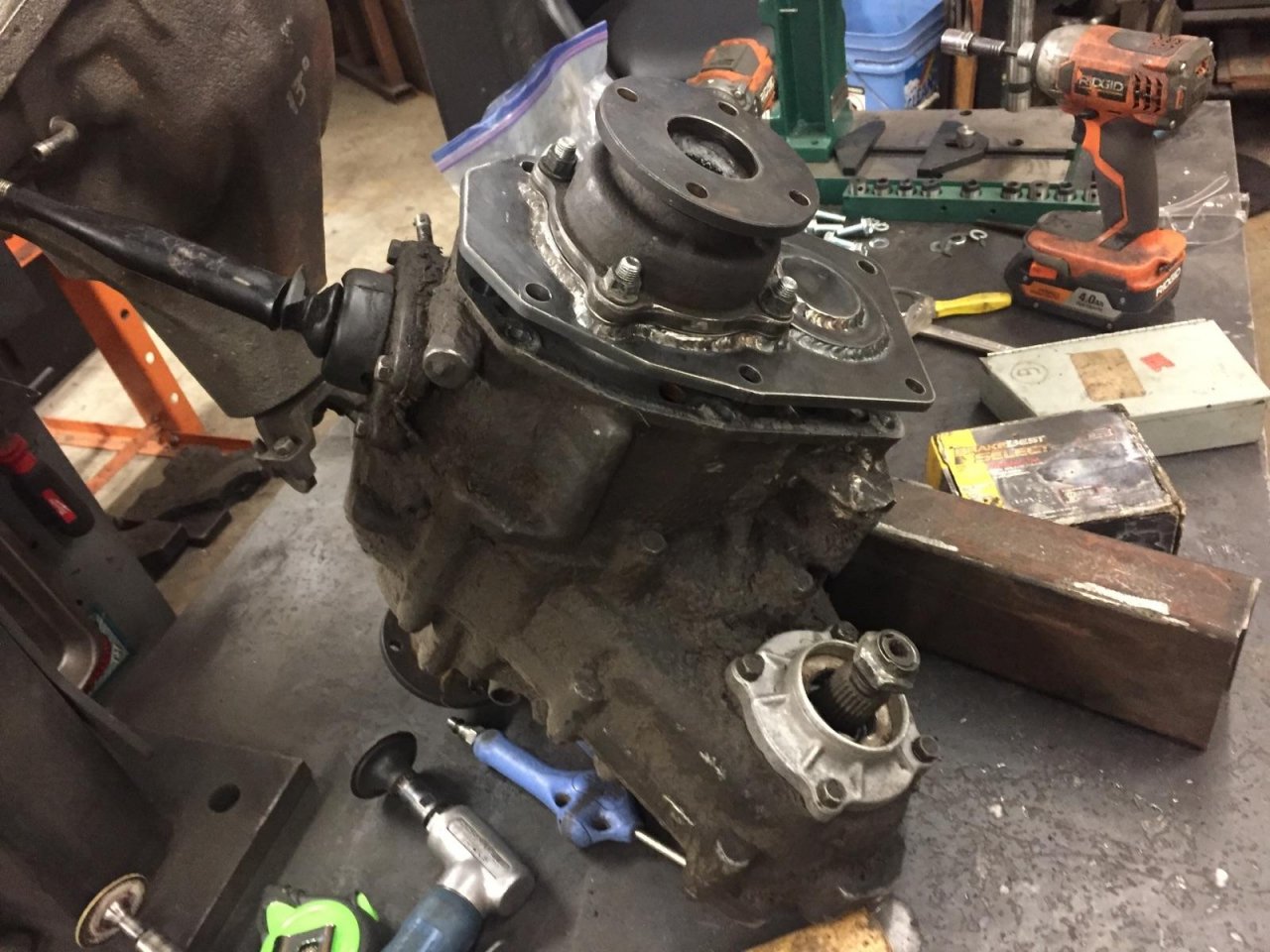 Oh my that looks soooo sweet.

Cool. Did you have someone there local fan that up for you? Looking forward to seeing it all out together.

I see a 1 ton diff in the background... which of course means 42 stickies to something similar. I also assume this has to fit b/w the pine trees of SE USA again, right? So that means narrowed tons. Just deducing....

jynx said:
Cool. Did you have someone there local fan that up for you? Looking forward to seeing it all out together.
Click to expand...

Local-ish, yes. May try to work on a kit to sell later on (always the entrepreneur).

TeddyBoy said:
I see a 1 ton diff in the background... which of course means 42 stickies to something similar. I also assume this has to fit b/w the pine trees of SE USA again, right? So that means narrowed tons. Just deducing....
Click to expand...

Goforth Tire in Knoxville will set you up with some stickies.

Anyone have a '71 FJ40 somewhat close to Marietta I can come look at?