I installed George's LED's some time ago and was dissapointed in the fact that neither of my rear door switches worked thus not allowing the light to come on. I decided to get some used ones from a salvage yard and just my luck after replacing both of them one still did not work. So since I had some back up switches I decided to disassemble one of them and try to fix it. Turns out this is a very easy fix.
The pic below is an "exploded" view of the switch. First remove the bolt that attaches to the door jamb. Unplug the wire. Remove the rubber boot, my boots did not tear but I can see where they might if the rubber is brittle. You will notice that the white plastic housing has some plastic "rivets". These will have to be drilled out to get you to the point of my pic. Once I had the switch apart I noticed that everything metal in the switch was corroded. I have a bench top sandblaster so I just put every metal part from the switch in there, but some time spent with some sandpaper will do. Then just put everything back together.
You could go through the trouble of "soldering" some plastic back in the rivet holes that were drilled out but the rubber boot and the bolt that holds the switch to the door jamb will keep everything together. I have not had any problems since.
This may not be the most technical piece of tech in the 80's section but it saves some money, is a rewarding project and is not even a

P.S.- I have two reconditioned switches for sale if anyone needs them 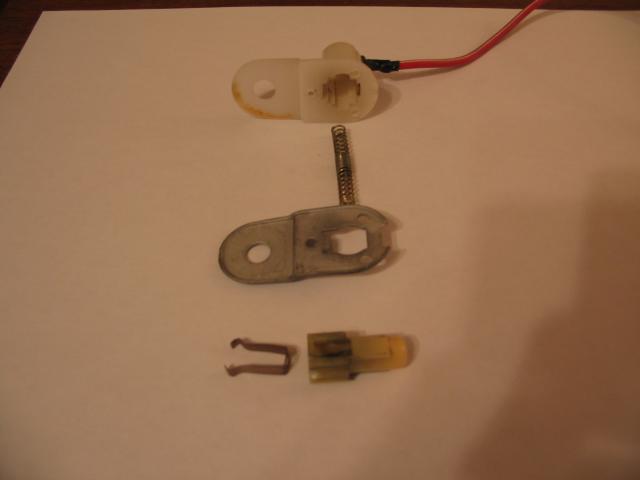 Brad, thanks for the inspriation. I've been meaning to do something about this for a few years. It worked like a charm, except I wasn't sure how to disconnect the red wire. I just left it attached and worked with it pulled out a couple of inches. On the second switch, I took care to drill off only the heads on the plastic rivets, leaving the little posts to keep things closely aligned during reassembly.
How do the LED dome lights compare to the stock lights? What order of magnitude brightness are the new ones compared to the old ones? Do they disperse the light evenly?

I cleaned mine last year, but apparently not good enough, they only last a few weeks. I called my Toyota parts source, and found that a new switch (that includes a new rubber boot) was only about $13 for a smart shopper price. So, about $26 and about 10 minutes and the problem was solved.

The LED lights from George are amazing! The light is very evenly distributed and tons brighter. I am not sure of the exact drain on the battery the LED's have but they are hardly anything I have read. Great for camping as I have had mine on most of the night at times and in the morning, the 80 still turns over just fine.

Highly advise you to purchase a full set!

psfpilot,
I agree with what harridig wrote except I would not say "tons brighter". If anything it's a better contrast. To me they seem brighter because they have a bluish tint rather than a yellow tint. I would recommend them in a heartbeat though. I get lots of questions and comments on them.

DRTDuck,
That's a good price on those switch's. I'm too cheap plus I like to take things apart to much to go buy new ones.

I just did this on two of my doors, but instead of drilling the plastic rivets I just took some wire cutters and essentially put an "X" on the face of each rivet. This allowed me to get them off, but they still "snapped" back together after I'd filed the contacts.

I couldn't find the tailgate courtesy light switch, even though I've got the FSM that's telling me exactly where to look. Is it built into the latch or handle? I'd rather not go digging for it in the wrong place.

In my defense, it was dark and raining when I was looking for it.

On my OZ 80 GXL the switch in the rear tailgate is in the latch. When I fitted a Narva fluro to the rear I found the wire to use tucked up under the headlining ready to go. Do US models come with a light in the rear as the OZ models are lacking in this area?
L

Mickldo said:
Do US models come with a light in the rear as the OZ models are lacking in this area?
Click to expand...

Mickldo said:
Do US models come with a light in the rear as the OZ models are lacking in this area?
Click to expand...

I just tried this and it worked fairly well, despite my having cracked the plastic. Hopefully it will stay working for a while, since the wife has put the foot down on further work for a while. However, I too couldn't get the red wire to release. Also, on the PS rear, the release bolt just kept spinning. I suspect the nut in the rear isn't secure anymore. Any ideas on how to access that?

To fix mine I gor really luck. I sprayed some wd-40 or Kriol in mine, wiggled it around a little and it hase been working for over a year. I'm sure now that I wrote this it will stop working and I'll have tobuy replacements.
You must log in or register to reply here.