I'm in the early stages of upgrading my engine drive belts from V-groove to serpentine on my SBC and upgrading to a high output alternator. I've assembled most of the parts and one that came in today was my dash "battery" light. Because I wasn't sure what was going to happen to my factory 30 amp gauge in the dash ('73 FJ-40) with the new 250 amp alternator I knew I needed an alternative if it blew. Now being an electrical idiot I've been researching what I need to do with regard to wiring. Besides wire gauges one of the topics that kept coming up was dash (idiot) light or no dash light. The light actually does more than just tell you if your alternator is working or not, it will also help you diagnose if you have a problem with the alternator or battery. During my search for dash warning lights I ran across this gem: 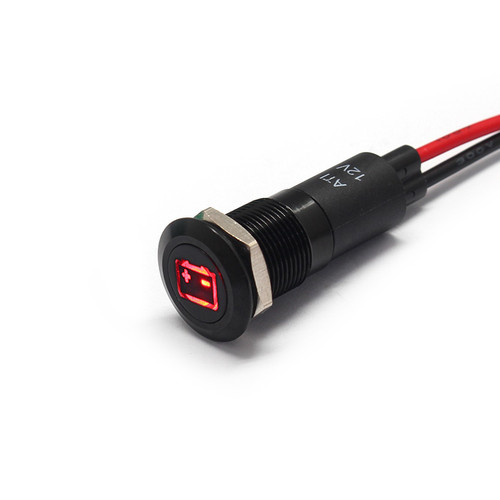 It is manufactured or simply sold by a company called Alpinetech. For my purposes what makes this light so special is that it fits in the dash hole directly below the brake warning light which now has a black plug filling the hole. Basically just to the right of the instrument cluster. The hole in the dash measured right at about 1/2" but has a flat across the bottom of the hole and this light states that it is 12mm. In the worst case I figured I would have to file a flat on the threads to make it fit. Initially I also didn't pick up on what it was constructed from. When I discovered later that it was aluminum I felt much better. It is also LED and not incandescent which was a plus. I had read that it also has circuitry that doesn't care which wire is hot (+) or not and will work no matter how it is wired. When it got here today I took it out to the car to see how much work would have to be done to make it fit. What I discovered is that it won't require any additional work beyond tightening the nut to hold it in place, I didn't have to do any filing of the threads, it fit right in the opening and the bezel covered the hole. The bezel is slightly smaller than the plastic plug that was filling the hole.

One of the reasons I wanted to post this information is because of the number of threads I've seen regarding non-working amp meters, inability to switch over to 50 amp from 30 amp meters or the cost of a new/re-manufactured instrument cluster. This is a very cost effective way to add a dash warning light so you can tell if your alternator is actually working. Now I realize that was I have posted is in regard to a Chevrolet alternator wiring, I'm sure with a little research the correct wires could be located to function with factory 6 cylinder wiring.

What I almost forgot to mention is why I like this solution. I didn't have to modify any part of the dash and when the light is off it looks just like the plastic hole plug so you won't even know it was added.
Last edited: Sep 14, 2020

Thanks for this timely write up. I was debating whether to install a warning light with my to be installed Delco CS130, and this makes it super simple.

I used Alpinetech PL12 LEDs when I first installed my Vortec 350. They're basically the same as the PLB12MS. They're nice, but the alternator indicator would continue to glow at reduced brightness when the alternator was running. It wasn't much of a problem during the day, but was kind of annoying at night. The LED would continue to glow once forward biased, due to the really minor current flow in the circuit, but that same current will not light the incandescent lamp. I could have solved it by adding a resistor to the circuit, but I chose the simplicity of changing to an incandescent indicator.

Those are nice looking lights, so I hope they work for you.
You must log in or register to reply here.

LED’s with warmer glow for dash
2

Is my dash a mongrel?

LED’s with warmer glow for dash
2