Since I'm going to do some long drives this Fall (SD, IN, PA), I figured I would finally pick up the XM radio I've been wanting. I also got a small CB.

I thought someone might get some ideas from how I did my install. I like to keep wires and cables hidden, so I usually try for the most elegant routing without ripping out the entire interior. I also like to keep things out of the way so waders, hunting clothes, and other random stuff doesn't get caught on the elctronics. As such, installation is typically unpleasant for me.

Installation in the LX however, was a pleasure. There was plenty of room in the truck, and I selected the smallest items I could find.

The XM radio is a Delphi Roady 2. I got it at Crutchfield for $49 with antenna and a couple of mounting options included. Check this out: They made such a big deal about their customer service in the literature, I called them to ask if the Nakamichi had an aux port or CD changer plug I could connect the XM to. I never thought they would be able to tell me, but within 2 minutes, the tech had a rear view of the deck displayed in front of him and saved me at least an hour of pulling out the unit only to find no aux port.

I got power for the XM off of one of the reading light wires. The XM antenna is super small with plenty of small diameter coax. I was able to route the coax into the sunroof well and loop the excess back and forth the width of the sunroof a couple of times. It tucked neatly up under the lip of the roof sheetmetal and a couple of feet of trusty 100 mph tape is going to keep it up there. There was enough room up there that it wasn't to difficult to maintain appropriate bend radius on the coax.

The Roady 2 has an internal FM modulator. Doesn't sound digital, but doesn't sound bad, either. Better than typical FM and no commercials. It is simply stuck with velcro to the headliner. I don't think it is going to move...it is stuck tight enough that I can't pull it off without some effort.

The CB is a small Radio Shack model connected to a Wilson Lil' Wil. I will only use it once and while when driving with others or at night on long drives. There was more than plenty of space for it above my right leg. See below -- I routed the antenna cable from the roof rack, down the gutter(?) on the roof above the driver's door, tucked up underneath the windshiled trim down driver's side, and then routed under hood, behind, fender, and in driver's door. The pic below of the routing in the door and under the dash may seem extreme, but there is no movement when the door opens and closes, and the bend radius isn't as bad as it looks.

The Garmin GPS V is on a Garmin windshield suction cup mount. Honestly, it works great except when the temp goes above 95 and the suction cup gets too soft. Other than that, the satellite coverage at that location has always been excellent, even in the trees, and the view from the driver's seat is perfect when following routing arrows.

I hope this helps you out if you're looking for ideas. I'm happy with the way it all turned out.

P.S. Now, if I could only find a storage solution for tow chains, pintles, first aid, jumper cables, rain jacket, tools, and all the other two tons of emergency stuff I like to carry! I don't want to install a drawer, but that plastic box I have strapped on the back floor just isn't working! 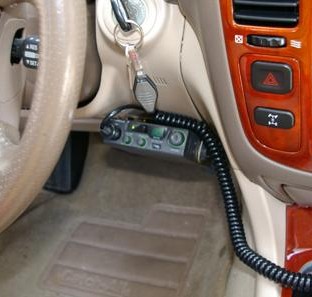 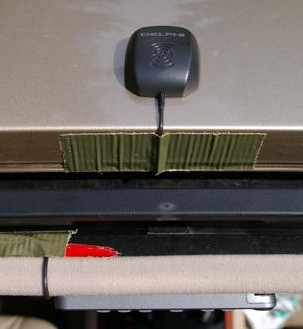 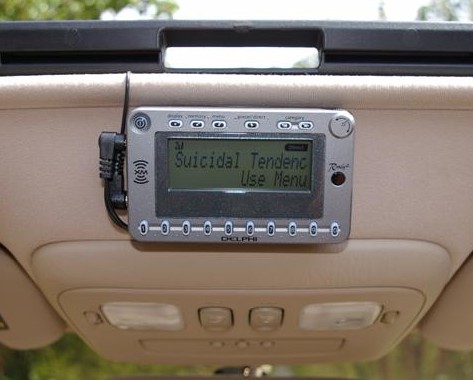 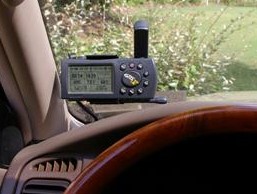 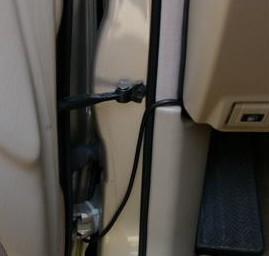 I have my tire chains in two Gatemouth-type bags strapped to the floor using the third-row seat tiedowns. Seems to work pretty well,keeps them quiet and they are easy to carry or move in the bags.
H

Can you please explain how you used the reading lamps to power the XM? I have had my sirius for quite a while, but I have it mounted on the windshield. The antenna is centered on the roof near the rear liftgate, and I have it threaded thru the headliner to the front---no big deal, and doesn't mess up the interior for me. I'm interested in re-routing mine similar to yours... but the power issue is mind-boggling?!

hrc0105 said:
Can you please explain how you used the reading lamps to power the XM? I have had my sirius for quite a while, but I have it mounted on the windshield. The antenna is centered on the roof near the rear liftgate, and I have it threaded thru the headliner to the front---no big deal, and doesn't mess up the interior for me. I'm interested in re-routing mine similar to yours... but the power issue is mind-boggling?!
Click to expand...


I carefully pried the reading lamp/light/sunroof switch/etc housing down from the headliner and then probed with my VOM until I found power and a good ground. The XM doesn't draw a lot of power, so I tapped into the battery side of one of the reading light switches and grounded on one of the screws holding the metal frame to the roof.

The lamp housing has a clip at each of the corners and is screwed to the metal frame at one point, so the entire housing won't come down just by unclipping the four corners -- and I didn't want it to anyway.

I like the way you wired the Xm; it looks really good. On the other hand, you really should consider placing the cb somewhere else. That is a very nasty location for the driver in a front end collision. There is a reason why that area is smooth, rounded plastic. In a front end collision, that cb could do considerable damage to the driver's leg.
You must log in or register to reply here.