Want to trade for a Subaru? (Your daily laugh) (1 Viewer)

I know this is a long shot and probably never gonna happen, but I have to try, and at least give you all a laugh (I hope).

I've been eyeing the following, in no particular order: 89-94 XCab; any year Tacoma (prefer Xcab over std or 4-door); T100; 1st, 3rd, 4th generation 4Runner; 1st gen Tundra Xcab; any 60, 80, 100 Cruiser. Aside from a transfer case, Toyota sombrero, little/no rust, and a running vehicle, AC is my only other requirement.

This OB is the Base model and has 145k mi. on the 2.5L H4, 4-speed auto. However, the engine was recently removed and completely resealed incl MLS headgaskets; timing, pulleys, waterpump, plugs, more (have the receipt from Insomnia in Cary that did the work). New front rotors and pads (rears are fine), brake fluid flush. Good tires, trailer hitch; new stereo system (Pioneer bluetooth + Kicker speakers); replaced cig lighter w/ dual USB outlet; seat heaters for those NC summers; new rear KYB Excel G spring/strut combo; replaced cabin filter and AC relay. I am replacing trans fluid at each oil change to get new stuff in there, the tranny actually feels great and has manual selection as well. NO RUST anywhere, this car has been in Raleigh it's entire life, and I am 2nd owner. It is gold with a tan cloth interior. I am right around 26.5mpg mixed driving since I got it, and everything works as it should, and there are no fluid leaks anywhere.

(The shop that did the work also checked engine internals and the valves and confirmed everything was in great shape.)

On the downside: It was previously owned by an elderly lady in Fuquay-Varina who used it to go back and forth to her church, and to transport her husband to his many dr appts until he passed recently. She looked me in the eye and said she never had a major problem with it: that was because she never seemed to have it worked on. And her drug-addled son, who facilitated the deal, left years of coffee stains and cigarette burns on the interior (primarily the floor mats and floor carpeting) and was just generally a douche.

That said: The paint is mostly good, there is some light fading on rear tailgate and the front bumper cover is slightly spotchy, headlights are hazy, car definitely needs a detailing inside and out. Usual dings etc from age inside and out, with an added bonus of a small dent on the passenger side roof near the A-pillar from when my kayak slipped. I have new lower control arms + balljoints + tie rod ends for the front end I may install any day, once I get the gumption to fight the broken pinch bolt in one front knuckle (advised to stay below 75mph until resolved). I think it also has an exhaust leak at the Y (where the header pipes converge). The wheel bearings were replaced over the years, I believe the shop actually used the correct ones (unlike the front CV's they installed, which I replaced with correct ones).

I sold my GX and bought this to commute to my new job, then COVID shut everything down. Yes, it was a panic buy on my side as I didn't have a car to drive to my new job! Anyway, this would be a nice safe car for a HS/college student, or someone who needs a DD with decent fuel economy. I would not hesitate to drive it from Wake to Orange, Chatham, Harnett, or Johnston counties, but might take care of the front suspension before going further at sustained high speeds.

If you've read this far and have interest, I am happy to take a bunch of pictures or discuss. I'm open to an outright sale as well. Just PM, respond here, or email jmiccich at gmail.

Picture post-engine work. If you can find another 15 yr old Boxer engine not leaking anything, I'll give ya a dollar: 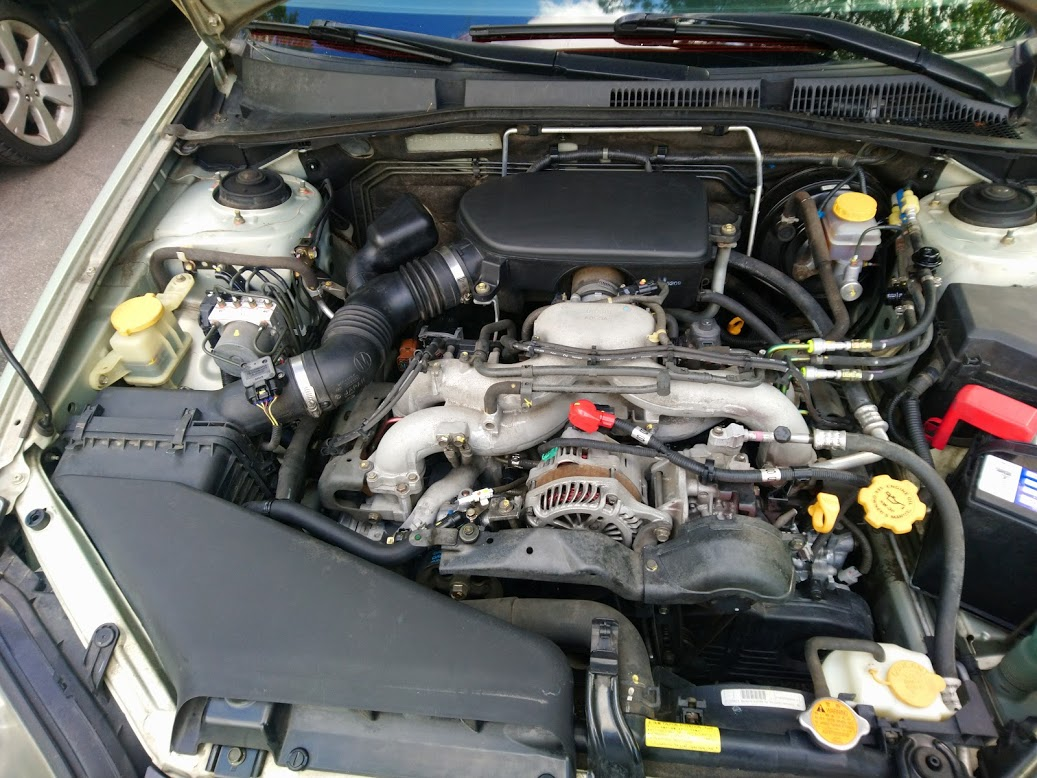 Good luck Joe. You should be able to find a decent yota for the price you can sell your subbie for.

This is the 1st time since October 1996 I've not had a Toyota 4x4 of one sort or another. Last year, we did our every-16-year-purchase for my wife and got her a 2019 Outback Premium - absolutely love that car. If I didn't have a payment on that, I'd definitely buy a "nice" Toyota. This is why I suffer - trying to be fiscally prudent....

Suggestion: Try again, but not here. You ruined it! Way too much history. I like a fair deal as much as the next guy, but you're scaring me!

Detail it, spray some Febreeze in there, put a picture of your grandma on the dash, and post a new ad:
2005 Subaru outback. Low miles on rebuilt engine! Good condition for the year, make, and model. I have some spare parts for anticipated repairs I'll throw in for a no-haggle deal. Don't try to talk me down, I know what I've got. My COVID-19 loss is your gain! Come get your next commuter or overland-build ready Subaru!

That's it. Feel free to copy and paste.

Spray cheap vodka on all the fabric inside. itnwill help get rid of smoke smell.

I am honest because anyone here who might be interested may be a friend, or at least share the passion for Toyotas - and I don't want any bad karma. The car doesn't smell, it's just in need of a (really super) deep clean, and some light maintenance. Guess 1 benefit of COVID is the stimulus money paid for an engine refresh.

@MDarius I'll use your tips on a general for sale ad (CL, FB) and if it works, I'll give you a cut of the sale price lol!

I'm always honest in my ads. I just will provide more info and history in places like mud than I would on CL.

You actually had me most of the way. Then there was the maintenance history, the drug user son, and I just shuddered... Just like your Outback does at 75. Been there, done that! Check behind the plastic panels before you sell it! You might be able to make a few extra bucks.

To all who stood in line waiting to buy this car, I am sad to announce it has been Sold, so you're all SOL. Within 1 hour of listing, for full asking price.*

*As with my 80, this was kind of a strange thing.** A young man was visiting his parents locally, he lives in Lansing, MI. He mentioned to them he really wanted a Subaru wagon because of 2 large dogs and to haul stuff for his home restoration. Apparently as soon as this conversation ended, his folks saw my ad, they live 10 mins away, and came over. Done.

**I listed my 80 on CL on a Friday around midnight. A guy was visiting his parents locally, he lives in Alaska and he's a Cruiserhead. First thing in the morning, I had messages from him, he came by an hour after I reached back out, and the 80 was sold.

I really like my 2006 Tundra double cab. We needed the double cab for the family but I would have preferred the ext cab. The turning radius is awful but the rest of the truck is well built and very comfortable. There's a few Tacoma vs 1st gen Tundra videos on the internet that convinced me to go with the Tundra. I got my Tundra for $12K with 116K miles on it.

@lumbee1 In my shopping, I'm actually seeing Tundras priced lower than Tacomas. The 2nd gen Tundra is just too large for me, been checking out some 1st gen Xcabs though and liking them. I did drive an 05 Taco XCab yesterday and thought it to be the perfect size for my needs, so....

side by side the tundra isn't much bigger then the Tacoma. the tundra is just a little wider, more shoulder and elbow room so to say.

Contrary to what I wanted, I ended up buying an 04 V8 4Runner. It shows its age a bit, but runs and drives very well. Came with an air/train horn, which I've removed.

Well I know when we talked you were pretty stoked about getting a Tacoma which I think would be a perfect set up for you but a V8 4 runner does not sound bad at all.
those things are very capable. There was a guyin our group during Rubithon that had a newer 4 runner with very limited mods and walked right through the whole trail with no issues at all. I was very impressed.

little_joe said:
Contrary to what I wanted, I ended up buying an 04 V8 4Runner. It shows its age a bit, but runs and drives very well. Came with an air/train horn, which I've removed.
Click to expand...

Phil Stetson loves the hell out of his V8 4runner. Nice work!!

Loved my '03. I wouldn't recommend the ARB suspension on it, though, if you go down the lift or new suspension path. Really hated that ride on anything but slow offroad.

I've had great luck with the Bilstein 6112 on both the Tundra and Tacoma.

It has the X-REAS shocks and I am surprised how well it drives! I'll stick with this until it fails/starts leaking, then will replace with shocks/struts to match the stock springs - no intention of lifting. And @weejub I'll never have another ARB/OME suspension, I don't have 600 extra lbs on the front and the rear to make the ride less sucky - the Bilsteins would be top of list for me w/ stock springs (or a take-off TRD suspension).

I'll grab some pics later today and start a new thread. Just wish it'd cool off a bit so I could work w/o all the sweat.... Aside from removing the train horn, it really needs a good cleaning, I have to address a seal on the transfer case actuator, and figure out which TPMS sensor is dead.

I was smiling on the ride home - so happy to have a Toyota 4WD again (after 3.5 months away)!

what are you going to do with the horn?

fourtrax said:
what are you going to do with the horn?
Click to expand...


I gave it to my neighbor's child, when she saw me remove it she had to have it.....

Found a fidget-spinner, 3 poker chips, a lady's ring, and 6 lighters so far. O and I got my 1st ever pair of Ray-Bans.

nice it came with aftermarket accessories.
You must log in or register to reply here.

What's in your off road recovery kit for NC/East Coast?
2