After smacking and bending my bumper mounted tire carrier on trees, rocks, and ledges too many times and having limited visibility out the back, I started a bed-mounted carrier project. It should be much better on the trail. It does take up a lot of interior space, but seems to be worth the trade off.

The last thing I need to figure out is how to hold the tire in the UP position. I tried some 1x1 kick-stand style props to hold it up which works well but limits access to the ammo case that the stand rests on. This works well on level ground but would not be a good solution on the trail when the truck is off camber as the weight of the tire would migrate downhill. It's very heavy and would be dangerous if it were to fall down from the open position. The red cinch strap in one of the pictures actually worked pretty well at hoisting it up and down as well as holding it in place. Might work but I need to find better and more heavy duty straps.

Any ideas on good heavy duty straps out there? Also, any other ideas on how to hold the carrier in the up position would be appreciated. Some kind of self latching device that would lock into place when the carrier was pushed up into position.

Thanks for thoughts and input. 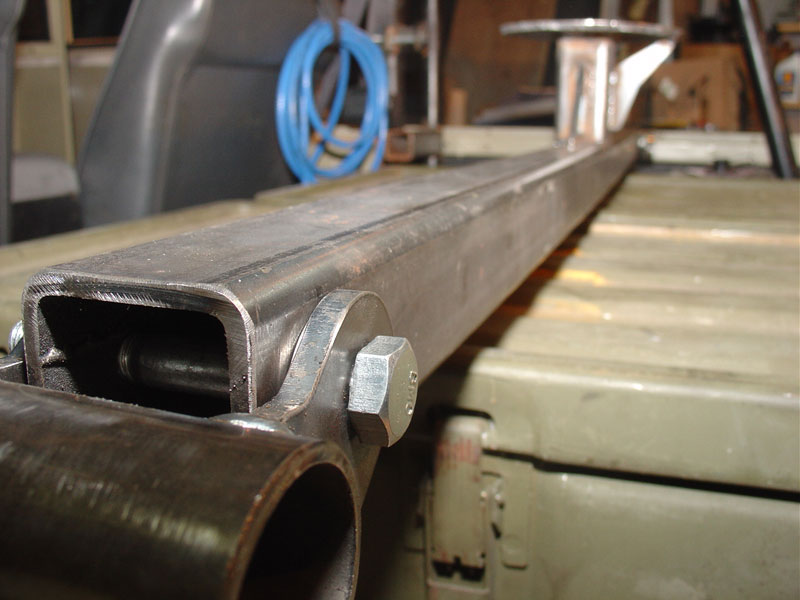 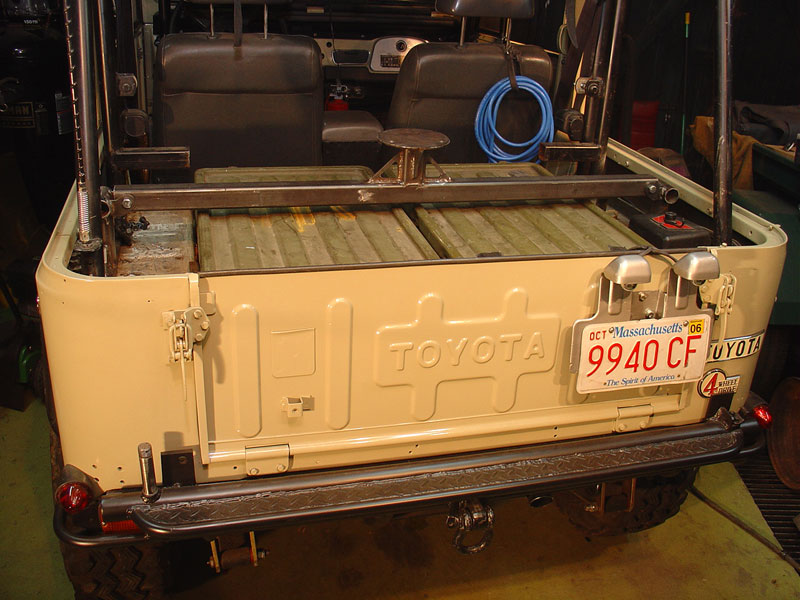 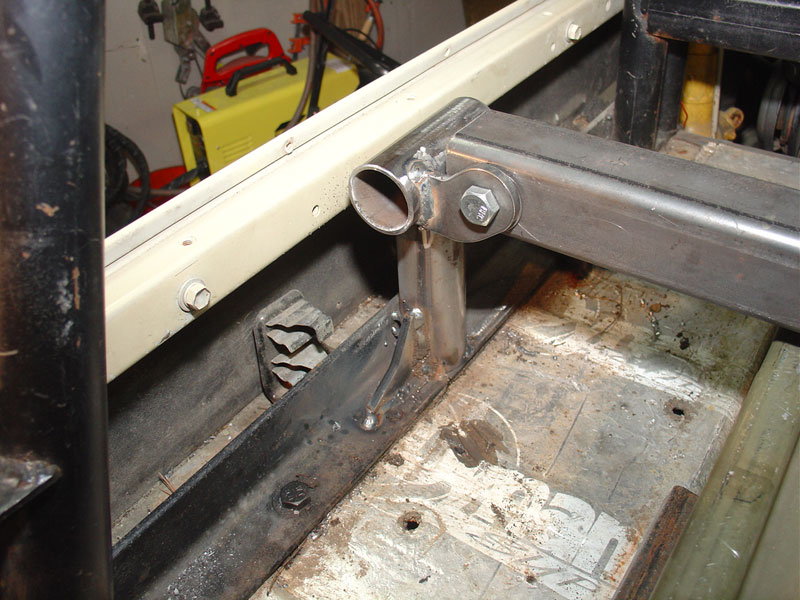 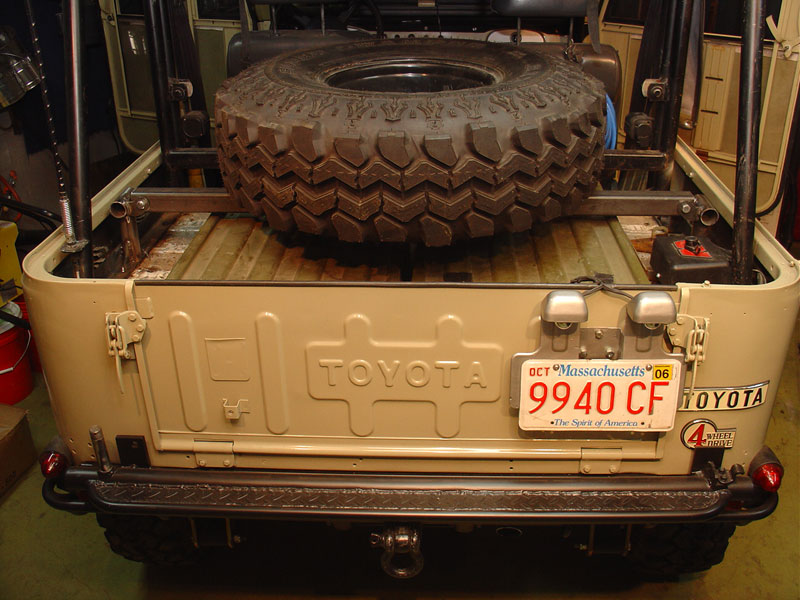 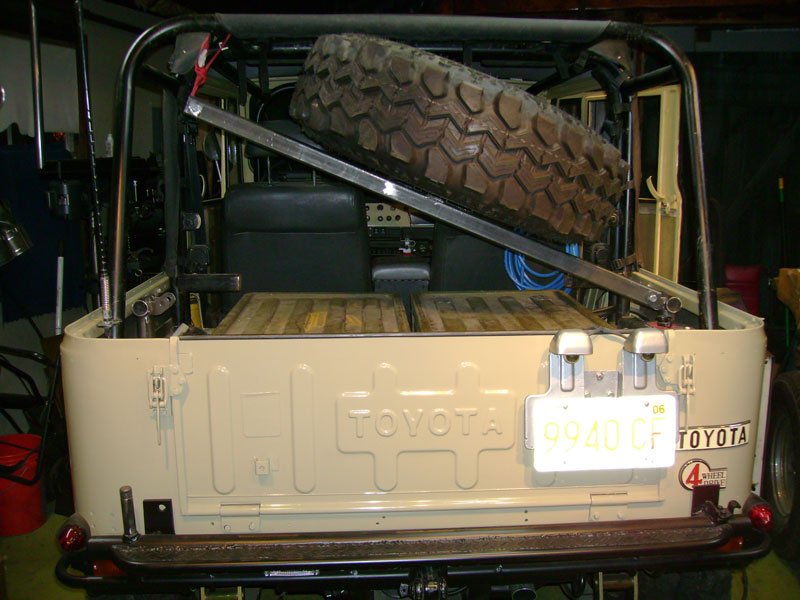 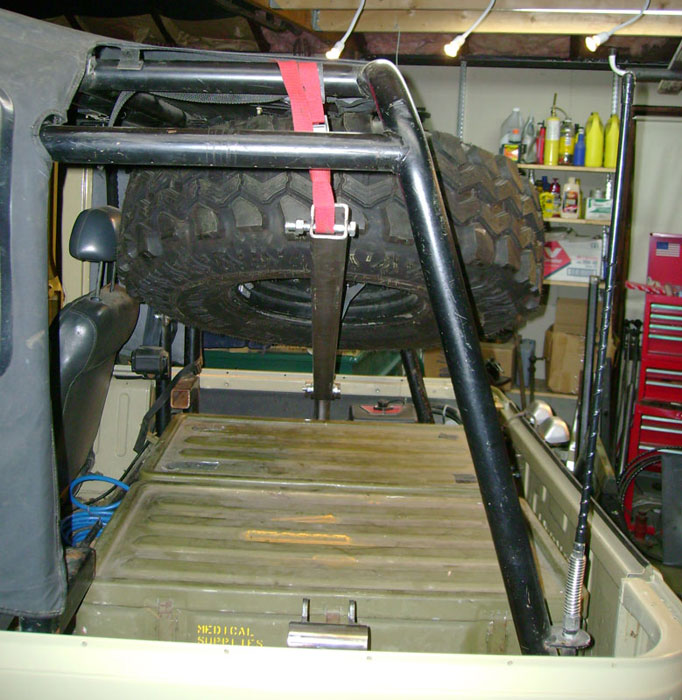 how bout a hook or hasp on a chain or stap. hook it to the roll bar. is the top off most of the time? put a magnet on the hook or hasp so as not to rattle.
M

what if you had the same setup on your rollbar as you do when its in the down position? you would have to make some sort of small extension so it would reach, but it would be pretty solid.

I've been thinking of custom tire mounts myself. I want to have a custom cage built and was thinking of putting the tire vertically over the passenger side wheel well and have the mount tie into the roll cage design.

As for the hook, you could wield another piece of 1" box straight up 90° on the drivers side long enough to reach the roll cage when the tire is in the up position and fab up another pin and catch just like the one used in the down position.

Post pics of whatever you come up with, again, nice job.
1970 FJ40 Stock with F Motor and OME Suspension & Junkyard Seats. Onboard Air & H41 in the works.

if it is removable or movable, why not use hitch pins instead of bolts.
NRA LIFE MEMBER
DAV LIFE MEMBER
gpojerry@gmail.com

I think Mathblasster and I have the same idea, just different ways of describing it. Sorry, Mathhblaster, I didn't mean to steal your idea, great minds think alike.
1970 FJ40 Stock with F Motor and OME Suspension & Junkyard Seats. Onboard Air & H41 in the works.

hijack, my thoughts EXACTLY!!!
"Hallucinations are bad enough. But after awhile you learn to cope with things like seeing your dead grandmother crawling up your leg with a knife in her teeth. Most acid fanciers can handle this sort of thing. But nobody can handle that other trip-the possibility that any freak with $1.98 can walk into the Circus-Circus and suddenly appear in the sky over downtown Las Vegas twelve times the size of God, howling anything that comes into his head. No, this is not a good town for psychedelic drugs."
You must log in or register to reply here.