I was going to work one day and the fiberglass top just peeled off
Click to expand...

Alex, I love the spring flip. Is there any way you could do a little more detailed write up of how you did that? And, since I'm not up on nomenclature, am I understanding that the lengthened wheelbase was in order to accomodate an automatic transmission?

Nice Rig! I would love to build a spare tire rack just like yours.

Everyone in the Seattle Cruiser Heads keep telling me "Wait until you see Alex's rig". Can't wait.

Johmbie, it had the TH400 in it with stock wheelbase. The driveshaft was quite short, but never had any issues with it at stock height. Just decided to lengthen the wheelbase when I lifted it, read a lot of other posts and decided the 60 series springs in the rear would be the best way to go. Ease of installation and positive results from other people made up my mind, since for now I'm staying SUA. Used 40 series front springs, 2 1/2" lift and flipped them end for end. Of course, front and rear drivelines needed to be lengthened, but it's just money, I'll make more ! Thanks for the comments guys !! And thanks for the help and inspiration, lots of awesome rigs in this forum !!

I decided fuel injection was next on the modification list. I wanted to go with Tuned Port Injection,Mass Air Flow, and went with an earlier year(1986)so the manifold would bolt up to my early small block heads without modification. I aquired the TPI set-up from a fellow Seattlecruiserhead, owner of Torfab,and went about sourcing all the senders, sensors and what-not that I needed from e-bay. I used the Walbro 255 fuel pump. Had to have the e-prom custom calibrated for my cam and application,I had it programmed to 1989 with cold start delete, EGR delete and VATS delete, was done by "scotthansen.net", mr.willys on Pirate. Great guy to deal with, I highly recommend him for any programming. I have yet to take it wheeling, but the street performance is excellent !! I purchased the TPI unit with a custom harness which really helped the install. So on with the never-ending project !! (paint is next) 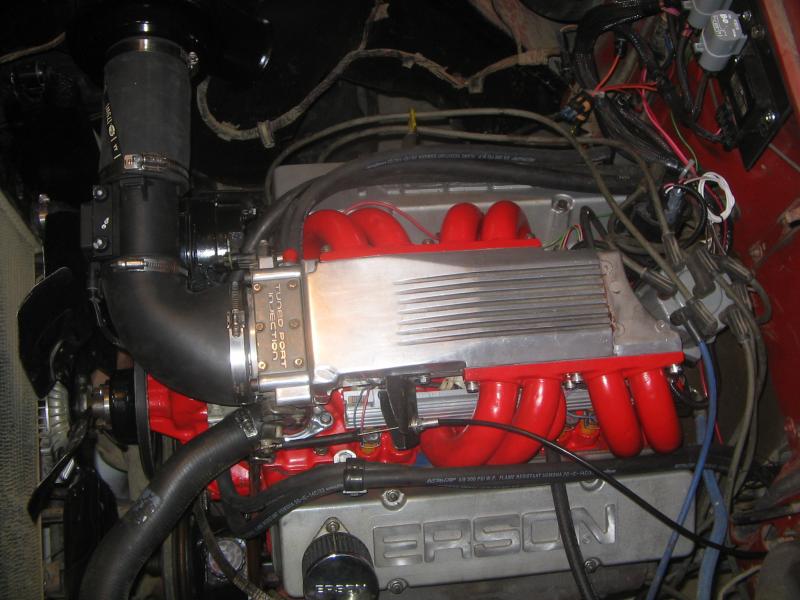 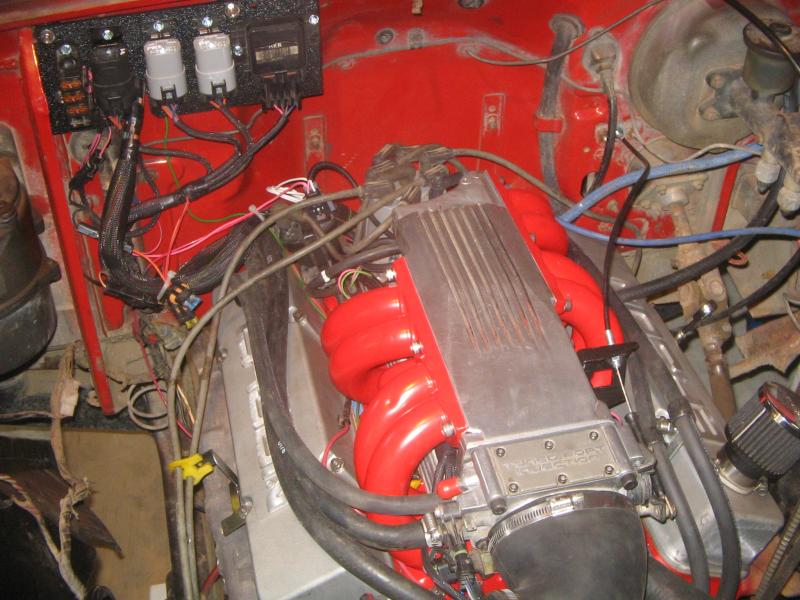 Alex it turned out really nice! so scott did ya right on the chip, i new he would. smart move on eliminating the cold start and egr and vats. i hope you enjoy it and get it out wheeling soon. one of these days we will have to meet up when i get all my crap finished up.

and spotcruiser the gizmo's are from left to right the fuse panel for power to the TPI unit and then the next three are relays for fuel pump, maf burn off, and maf power relay. and the last one is the electronic spark control module. and those are the newer style relays used on the 88 or 89 and up TPI set ups.
76 FJ40 tuned port injected 350 sbc, toy 4sp/tcase, tilt steering columm, full family cage, longs, 35's, ps, 4/w disc, frenched in ant. etc.

Right you are, Frank ! I haven't had it out wheeling yet, but have put quite a few miles "on road" to make sure everything works properly, very happy with the performance. I'd like to see your truck, we'll hook up one of these days !

yeah we will have to get together to check out each others trucks one of these days. but i have some personal stuff going on right now i will PM you about.
76 FJ40 tuned port injected 350 sbc, toy 4sp/tcase, tilt steering columm, full family cage, longs, 35's, ps, 4/w disc, frenched in ant. etc.

How are your rear springs working out so far? Exactly which spring did you remove? I have 60 rear springs in back and I have not yet removed a leaf. I know I need to remove one since they are too stiff, but I'm not certain which to remove.

Hi Steve,
I didn't remove a leaf, I turned the second spring around for the spring flip, there-fore keeping the military wrap in front where it belongs. Now that I've had them on for a while, I need to relocate my shackle hanger as the shackle angle is flattening out as the springs are broke in.. I just got a set from RuffStuff for that.

I misunderstood what you wrote. I thought you removed a leaf from the 60 spring pack. I was reading up on the spring rates. 40 rear springs have about a 170lb rate versus around 260 for the rear 60 springs. I'm going from memory so I might be off on numbers a little. I was thinking to remove a leaf on mine becase the rear doesn't flex as well as it used to.

I was wondering about the fronts too because I went from the 6 to a V8 and lost a couple hundred pounds. Might flex better with one less spring leaf.


I'll have to check out your spring hangers next meeting. Will you make the July meeting with your 40?

Yes, and I'll have it at the meeting tomorrow night as well.

hi, have you moved your rear spring hangers already? I want to install 60 series rears on my fj40 rear what would happen if I just install them without removing of flipping them like you did?

I am not sure you could even install them with stock shackles as they would either be too short or lie totally flat. I think even with long shackles the angle could be extreme, but I think Alex is still using the stock hangers. Longer shackles would reduce the angle, but add their own problems. There are probably 90 different opinions on the best shackle angle as many as there there are degrees in a quarter arc. That sounded better before I wrote it. ;p


chrislozada said:
hi, have you moved your rear spring hangers already? I want to install 60 series rears on my fj40 rear what would happen if I just install them without removing of flipping them like you did?

Chris,
Your Off-road festival looks like a great time !! You could do the 60 spring swap with-out the "flip" easy, you just need longer shackles (mine are 6.5" center to center bolt holes).You also need different hanger bushings, I'm not sure of the part #'s and I won't be home for a while, but I got them from SOR. They are for a 5/8" bolt and a thinner shoulder. Without flipping the spring, I'm not sure about drive line, brake line or shock mount mods that might be necessary.

thanks!!! 4weeling is a mayor thing here in venezuela. I'm gonna try install the springs to see how things go. there is a mod very popular in town but i'm not so sure about it. https://forum.ih8mud.com/40-55-series-tech/418689-venezuelan-modification-fj40-suspension.html. what do you think?

www.iguanaexpedition.com
www.noticias4x4.com
You must log in or register to reply here.