All it took was a simple, off hand comment. Sitting at the luch table at the shop, I wasn't even serious about it! "I think I'll look for a FJ40 Landcruiser." The snowball started rolling. A guy across the table says, "I have one at a friend's house that I can't afford to go get, and his wife wants it gone. If you'll go get it, you can have it. BUt i get the engine, a built 350." Two weeks later the Silverado and I, with a borrowed car trailer in tow, find ourselves headed to Salt Lake City. He said it had some upgrades, along with a little rust problem. I pull up to the dude's house and there she is, in all her glory!! 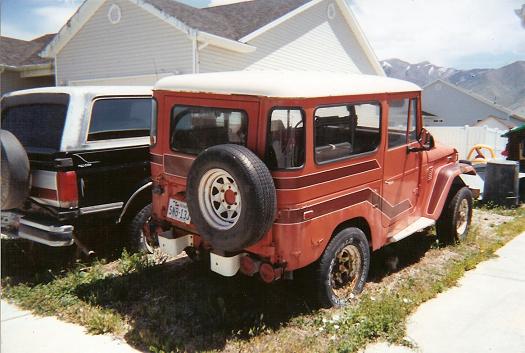 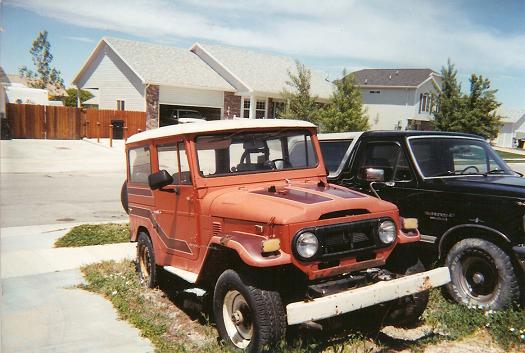 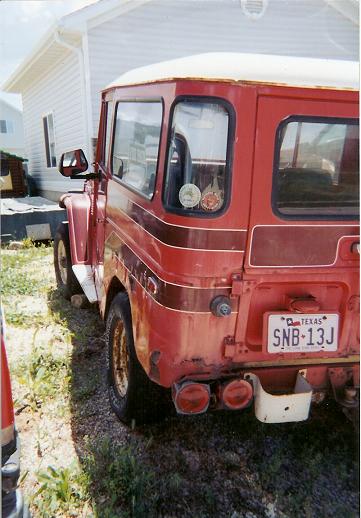 I almost turned around and split. If it wasn't for the 2x6's under the seat supports, you'd be doing a Fred Flinstone! The only thing holding the rust together was bondo. But under closer examination, I noticed Saginaw Power Steering, 350 with a TH400, rear disc brakes, and all the parts for the front disc conversion laying in the back. I thought, 'What the hell, i drove all the way down here,' so i loaded it up, and back home we went. Luckily I arrived home while the

was at work. So into the garage it went. I fell asleep watching TV, was awakened to the scream "You drove to Salt Lake for that?" She is actually at the point of forbidding me to sell it now!

Well i pulled the engine and gave it to my buddy at work. Another friend had a mildly built 350 for sale out of his Chevelle. So i had power again. Next was installing the front discs, as the front drum/rear disc combo didnt work to well.Now she would go and stop. The rear springs were so sagged out, it looked like a dog with worms scooting across the carpet as it went down the road. I put some stock springs int he rear to level it out.

Then i met a guy at the Puyallup 4x4 swap meet who has a feild full of Landcruisers of all vintages. We made a deal, I overhauled the Detroit 8V/92 TA in his dumptruck, he installed a good used tub and a bunch of other parts in my 40. I installed a 2" body lift at this time, made access to the top of the TH400 and transfer case better. The only rust now was under the doors, at the bottom of the tub, so i cut 3" off the bottom. Had no front drive line or shift linkage, so Stan provided me with that also. I had to modify the tranny pan for the front drive line, it is TIGHT! I put 33x12.50x15's on it and an old Bellevue winch. Then i had a front cage made, and installed some leather seats from who knows what. 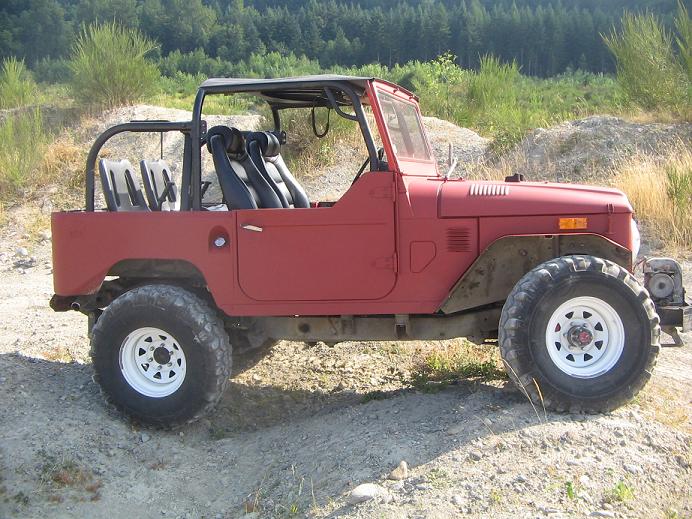 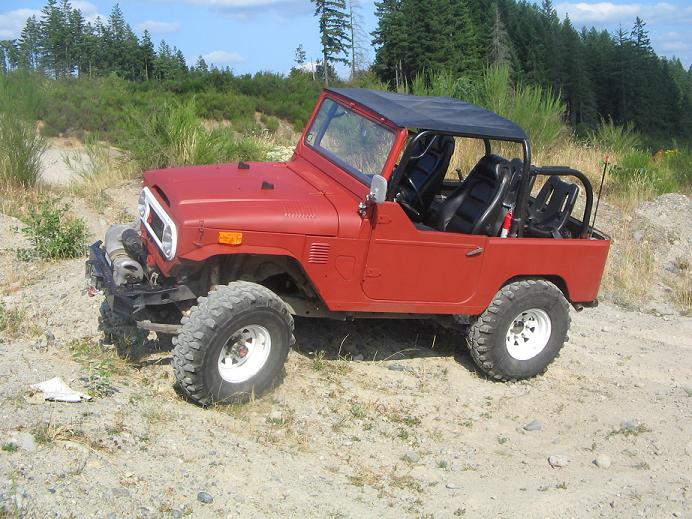 The hard top went bye-bye, I was going to work one day and the fiberglass top just peeled off. I hadn't realized the rail around the top was rusted out, so i took the doors off too. Still have them, they are in perfect condition, I may use them some day. But I got tired of getting covered in mud from the front tires. So i made hard doors out of an old pair of doors i picked up. Lock-Rites front and rear came next.

Both of my granddaughters love going for rides in the Cruiser, So i made rear seats out of a pair of Subaru Brat seats. I made them in a frame i can remove quickly if i need the room for other stuff. I do need to extend the rear cage for more protection for them.

The next addition was the sliders which incorporate front fender protection. A friend of mine did this, I had to trim a pair of front fenders for it to look right. He did a great job, works well too. They have kissed many a tree, just cant keep paint on them!

Then last spring, i decided it was time for a change. I picked up a pair of 2 1/2" lift 40 springs. Flipped them and put them in the front. Bought a pair of 2 1/2 " 60 series springs, removed the top spring from the pack and flipped it after re-drilling for the centering pin. I did this to keep the military wrap at the front. I installed them utilizing the stock hangers and shackle mounts. Used bushings from SOR so I had the 15mm spring pins in front and 5/8" bolts in the rear. I installed new greasable spring pins all around. I ended up making new shackles out of 3/8x2" steel, holes are 6" center to center. IOt provides a 45 degree shackling angle, rides and flexes very nicely. Had to have both drive lines lengthened and had longer brake lines made. I just flipped the front upper shock mount bolt towards the front, but still need to make rear shock mounts. I also had to do some major trimming in the rear for tire clearance, and re-do my exhaust as it had exited behind the rear tires. I sold the 33x12.50's and installed some 36x14.50x15 TSL radials.What a difference! Wheel base is 100". 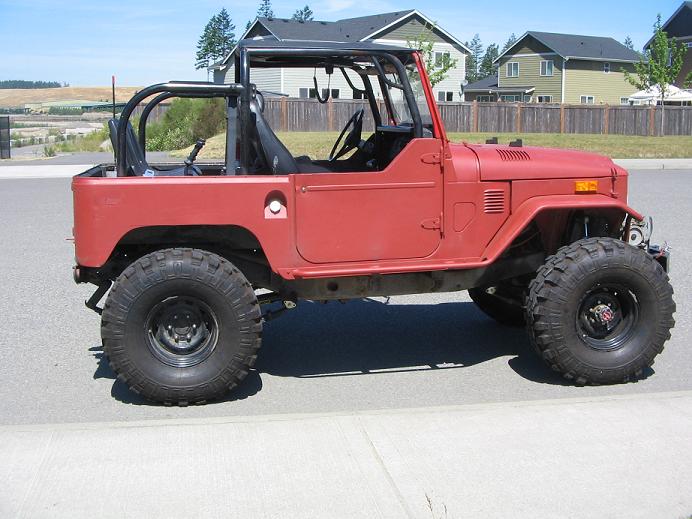 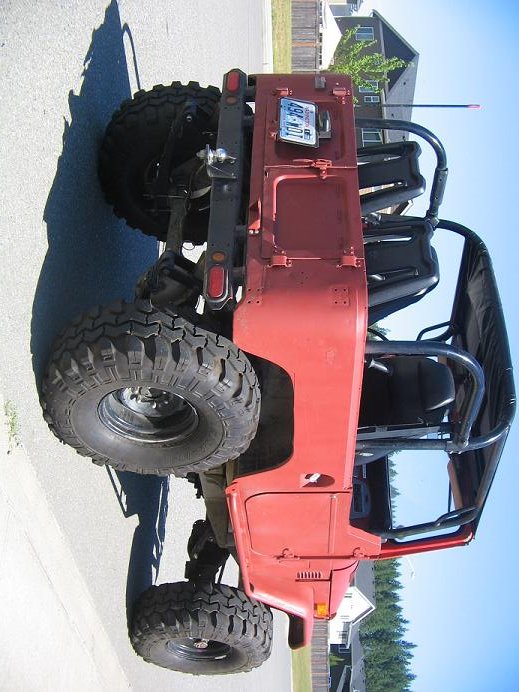 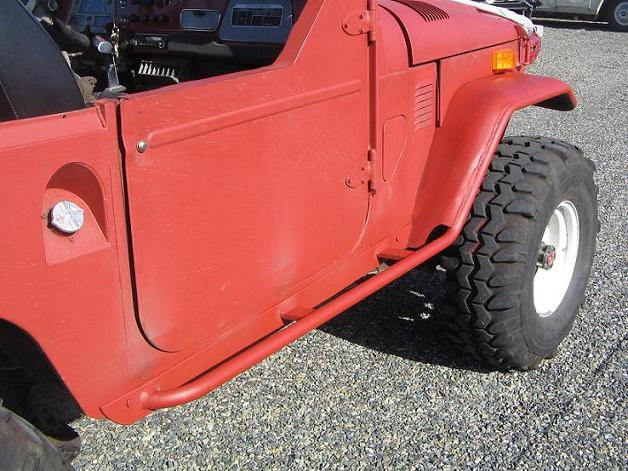 There are 2 projects i want to get done this winter. One is a spare tire carrier, which I have started. With permission from Drew, REZARF, I am stealing his design, I really like the way his turned out. On board air will be the other addition. I also picked up a tilt column from a 91 Camero, and hell, I might even paint it this spring! Not sure what color to go with though. Now I'm just enjoying it as a very capable wheeler, but who knows what the future may bring. Hope you've enjoyed this as much as i enjoy reading everyone else's ROTW. Thank you for all the tips and info I've received from this group.


Yes love craigs list!! I was able to get an 8274 for about the same! Nice truck, looks like a lot of hard work and nice to see someone form Puyallup. My Cruiser is sitting in my dads driveway in Puyallup for a few weeks. Once again nice truck and maybe i will see you at the swap meet this year.

Alex, didn't know you were on the "ROTW" list!

Looking forward to spending some quality time with you this year - on the trail!

Thanks Cruiser Cruisen, and I'll be at the swap meet for sure. Never know what you might find !! Alan, I'm counting on it !!

I enjoyed meeting you the other day and I'm looking forward to some trail running with you this summer.

Looks great. I really like the proportions. It has just the right hight to tire to wheel well in my opinion. Good job.

Great write up! Rig looks grat. Keep us updated on your futture mods!

Nice write up, I love to hear the progression and see the pic's as you change an modify. Good Lookin Rig!
"The very worst thing you can to to a cruiser is half thought out mods that are underfunded and never quite get finished. Then you end up with hacked junk that doesn't work, and some future owner will curse you and all of your children." quoted from cruiserdrew

Thanks, guys, I do wish I had taken more progress pics. And I did need to cut out more clearance in the rear fenerwells since that last picture. Those 60 springs really flex !!

I'm glad this cool rig finally got its own ROTW. It looks great.

Thanks JJS, I really appreciate it !!

Nice ROTW. Enjoyed seeing your FJ40 as well as reading the write up. Thanks.

Congrats on your build

Good write up! I didn't know your wheelbase is 100". With the auto and the rear housing pushed back - how long is your rear driveline?