This my second attempt at a trailer build. The first was built on a smaller, lighter chassis....but the same premise of the tent on top, storage below, 2 awnings out either side, on board water, insta-hot shower, LP gas, modular kitchen to hook on either side (because not all campsites come on flat, even ground) pertains to the new. The hook -on modular kitchen will be a new addtion and replace the Cabelas Camp Kitchen which was awesome!!

The new chassis is a M116A2 military trailer. The plan is to cut off the stock surge brake and axle and replace it with a new electric brake axle. The Spidertrax are here, to convert the 6 on 5.5 Dexter hub (lug centric) to fit the Trail Edition wheels which are hub centric. All other components of the frame remain unchanged.

Similar to the last build the frame will be wood with 1/2 plywood sheathing (glued and screwed), coated either with Filon or FRB board, 1 -1/2" foam, insulated or sprayed, trimmed in aluminum, trailer windows that open w/ screens...and I'm anticipating a built up floor of some sort....just unsure of the exact heigth at this writing.

The bottom area, inside the camper, will be able to sleep two adults with room to spare. 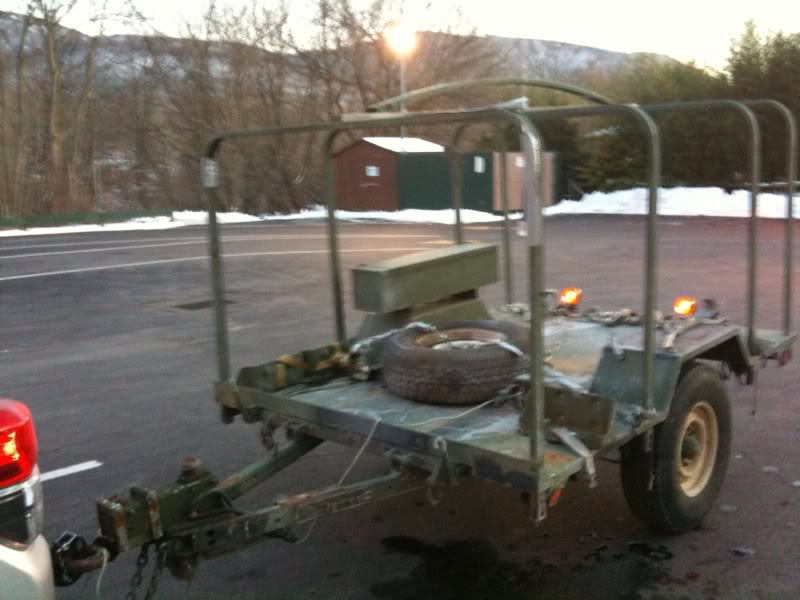 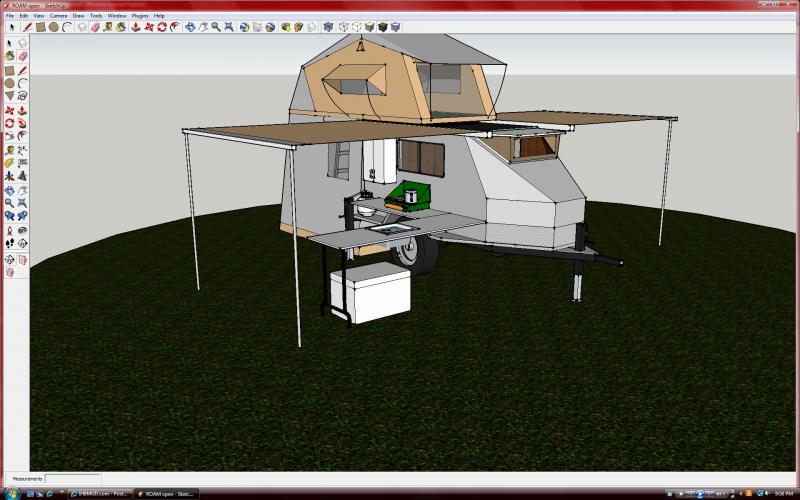 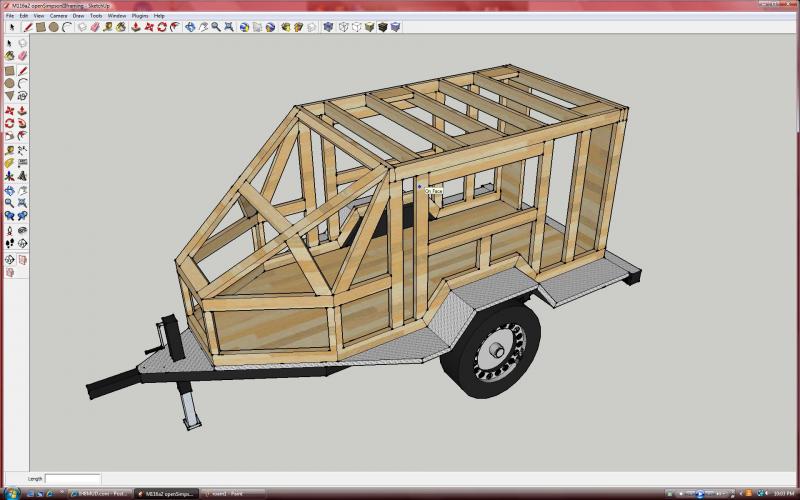 I opened this up and thought " that looks like what I've been thinking about doing!" I'm anxious to see your build.

In loving memory of Ronald Alan Heath, father and friend for life

I know it is a bit cumbersome, but it'll be a good trade off from a convienence standpoint. I looking to pack a lot of wallop in a small platform. My goal is also some setup flexability..that is say, from a full setup, to just say an overnight, sleep in the trailer area setup.

My new 4Runner is pretty trail capable, although there is no lift or off road tires (lol...yet) so that will also limit me getting completely "off road"...but I feel confident it could handle at least an occaisonal logging road, the trailer comes with an SOA and my intent is to maintain that. The heighth will bring hanging branches into play and the shear width will not be easily woven between trees. But I've realized that and accept it that this platform limits me...but I never intended to run it on the Rubicon or Moab.

I just want to tow it safely, be well outfitted once there, and be extremely comfortable doing it. I'm always open to ideas and innovation.

In loving memory of Ronald Alan Heath, father and friend for life

The tongue sticks out another 4' from the bed area.

Interesting design. Have a look at this, a local web site of off-road trailers and caravans that is locally produced here in South Africa. Your basic design has some resemblance to the "Conqueror" series.
------------------
Geurt
HZJ76 Station Wagon

I'm seeing feeties poking forward towards the hitch area, and a moonroof in the 2nd rearwards longways opening. storage underneath, perhaps a futon or air matt to stow forwards if extra stowage required? ie: interior sleeping.

Doesn't help the 80/20 rule, but blue/grey/black water tanks below sleeping area would fix that. could set up blackwater for portablility, keep empties below deck.

if yr committed to RTT, I'm gonna hafta re-ponder, tho the moonroof stays for interior visibility.


I see a lot of the Conqueror stuff over at Expo Cruiser SA...looks like nice stuff.

SirenMoses...the nose area is going to be "systems" and such. I'm planning on cutting the wheel wells back once the new axle and wheels are on(that will fix a nice 50" air matress). There's going to be lots of goodies under the floor(batteries, water tank, awning supports). There won't be any skylight though, but thanks for the idea! There will definitely be a RTT...looks like the ARB SimpsonIII.

Balance is going to be a bear though...now that the surge brake/support leg is off, it lightend up the nose, but it still takes a 300 lb'er sitting on the ass end to lift the tongue up.

But enough of the blah, blah....I have to get the tongue welded back together and the new axle on. I'm thinking of one of those muti axis hitch hook ups...any suggestions? 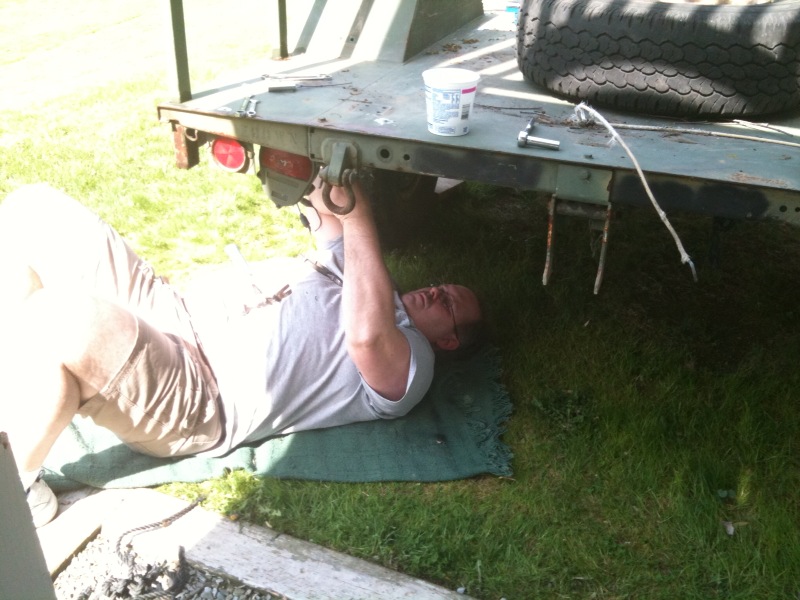 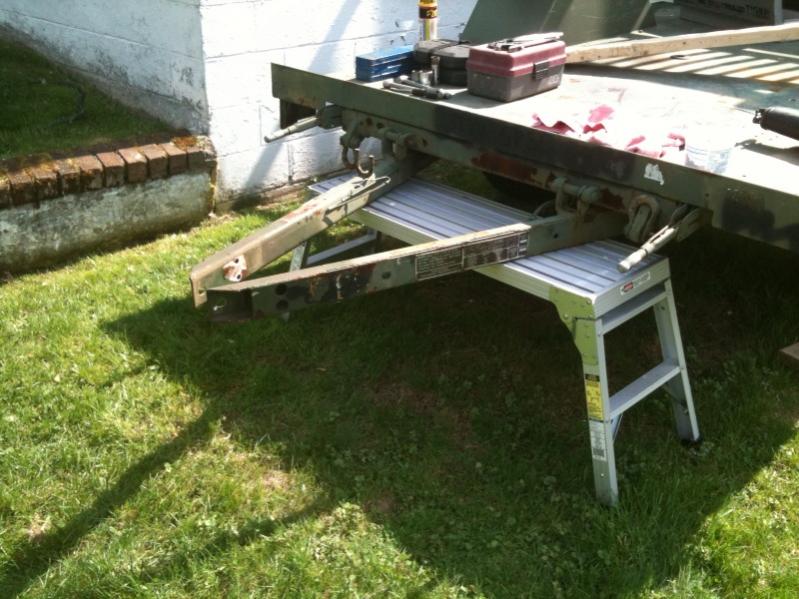 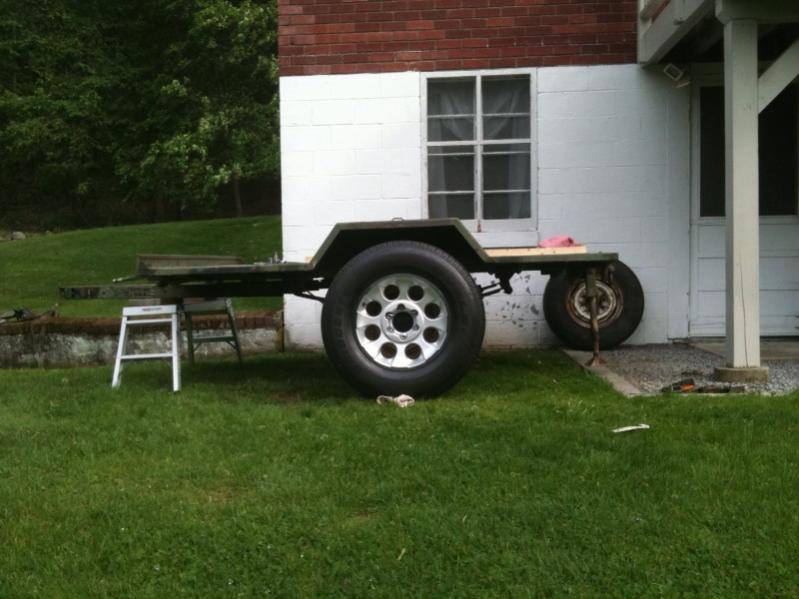 I like your Idea, I found this and was consitering it, but seems to heavy and tall for my 40

or maybe even give you some Idea's for yours.
good luck on your build

MTDewX8 said:
I like your Idea, I found this and was consitering it, but seems to heavy and tall for my 40

or maybe even give you some Idea's for yours.
good luck on your build
Click to expand...


Thanks for the link...that thing has possibilities!

Also had a great conversation with the fellow that developed and manufacters the Max Coupler. A real gentleman and super craftsman. He brought his amassed knowledge of 4wheeling and trailering together, to combine a quality coupler designed to perform flawlessly on the trail, or on the pavement. The product is second to none, and I look forward to knowing the link between truck and trailer will NOT be the weak spot.

Here's to you Chris! 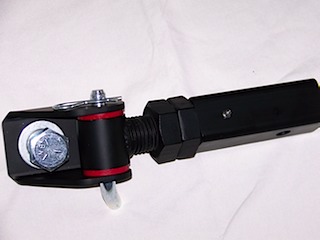 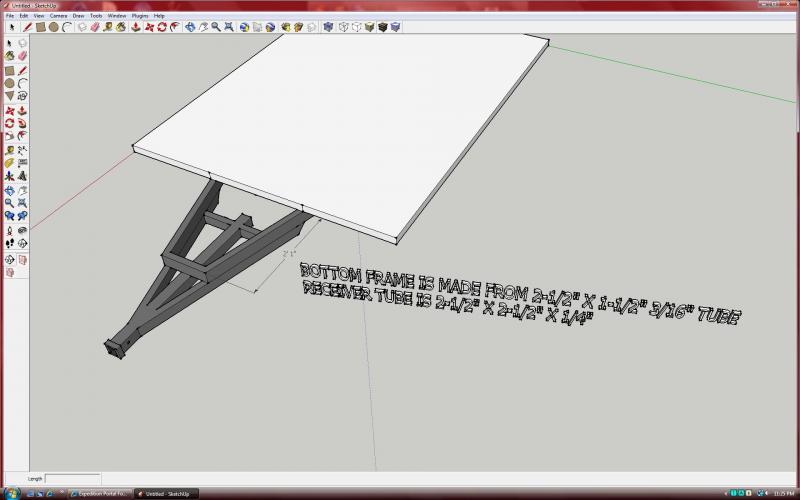 Guess what I have sitting in the basement?!?... 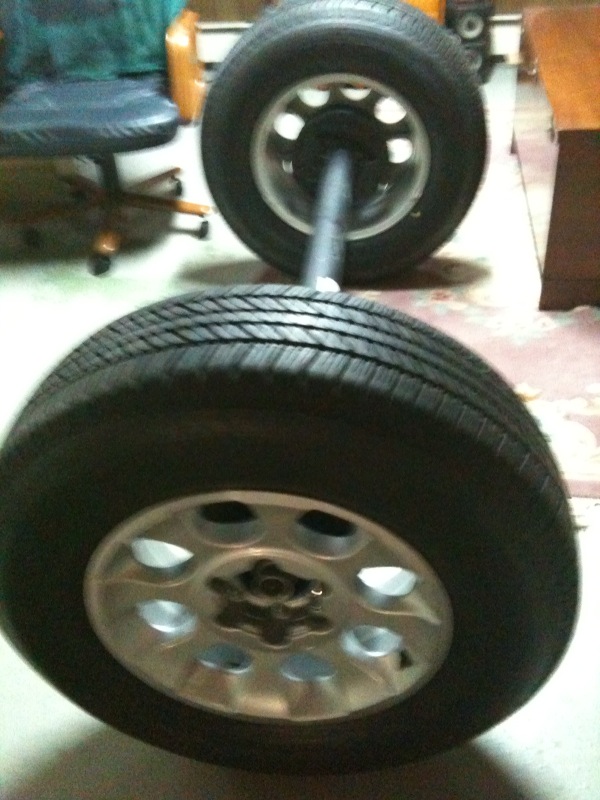 Got some time off and started the tongue...man, my hats off to guys that work with this metal work all the time...I'd rather put up crown molding and trim anytime. What a pain in the ass!

Going to start welding tomorrow. The only thing that changed was, I don't see any real reason to stick the receiver tube as far back as oiginally planned. I'm going to fish plate it with 1/4", and tube itself is 3/16". It may make more sense once the welding's done.

Also have the bumper material, so that will happen. I'm going to get everything good and tacked, and then flip it to put the axle on. At that point it'll be easier to finish up all the upside down stuff. I saved all the steel from the origianl bows, and I'm going to make a frame to hold the water tank. Hoping to have the new axle on by the weekend.

Do I have to "V" the steel parts before welding, and how deep on say a pc. of 3/16". I just bought a brand new Lincoln tombstone welder...and I'm thinking my first project should NOT be the hitch...

But forge ahead we must...

My goal is start the actual top build by June 1st. 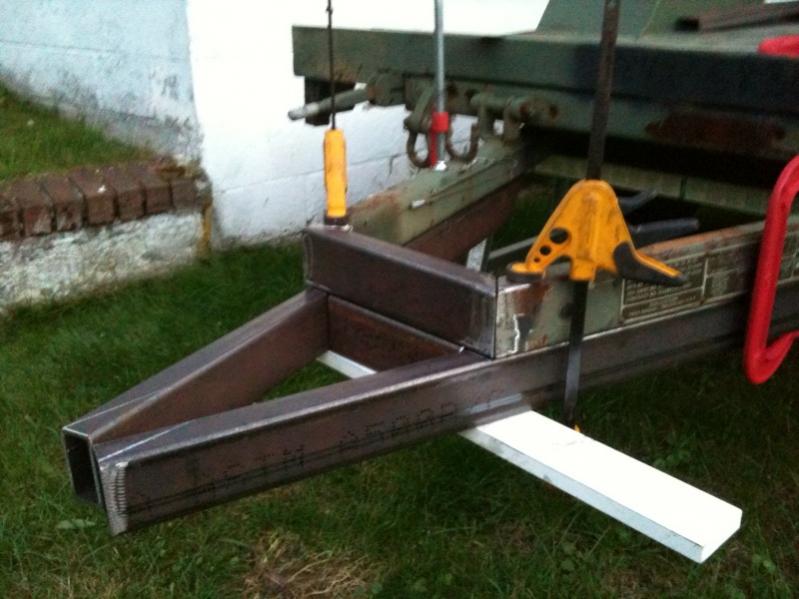 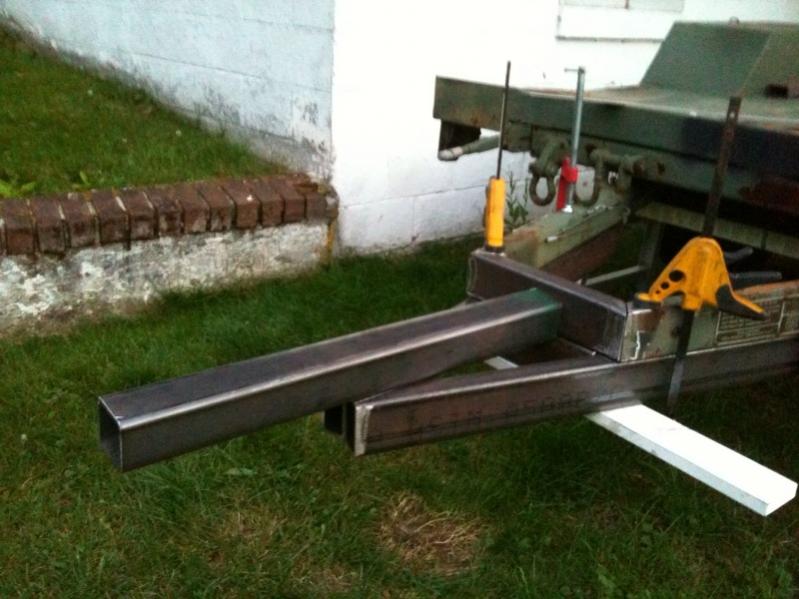 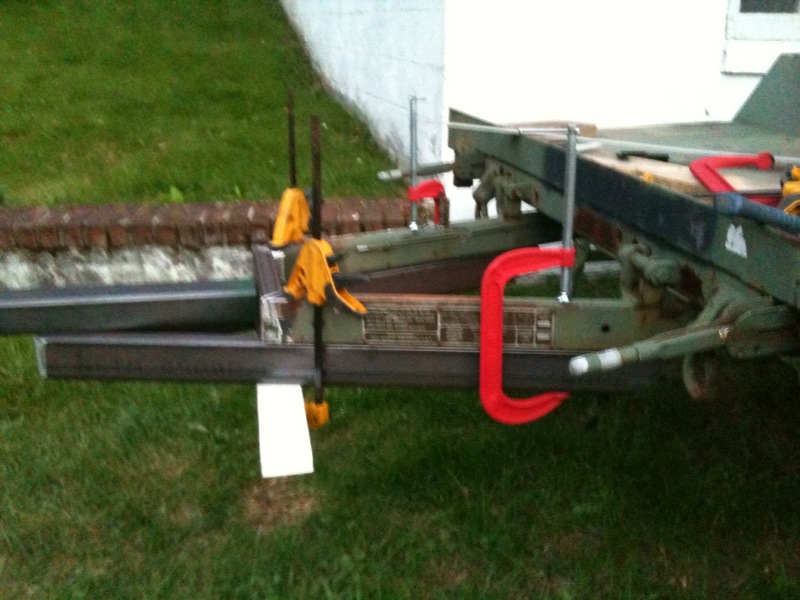 Keep it coming. I have a similar trailer and am looking forward to seeing what you come up with.

As far as the welding goes, I am no expert but I think you would be fine without a bevel on that steel, but I always prep my stuff with a grinder before welding and typically add a small bevel while I'm at it. The bevel does help make the weld better and its easier for me to follow under the hood. Do practice on a bunch of scrap to get the settings correct and get a feel for it. You do want these to be strong welds.

Tip: Get some 1/4" or 3/8" steel, one piece 6" x 6" and 2 @ 3" x 6". Tack weld these together so that it looks like an X then practice welding down each of the four troughs rotating as you go. Dunk in water to speed up the cooling. The first pass is a single, pass the second is two, the third is three and so on. This will give you a lot of practice using very little steel. Be sure to chip your slag between each. It shouldn't take long to get the hang of it. I hope this makes sense and helps. Its really fun when the welds look as good as they perform.
'94 FZJ80 MAF 5" comp lift, Slee shortbus, IPOR skid plate, sliders, snorkle, triple locked, york OBA, 12k winch, dual battery, HAM setup, CB, solar, fridge, full length rack, RTT, ARB awning and more......

Thanks for the tips 890man..but I think I'm hopeless...I better leave the welding to pros...what a horror show.

Couldn't get the hang to save my ass....gots lots of grinding to do in the morning. I'm going to give a guy a call and see if he'll come bail me out. 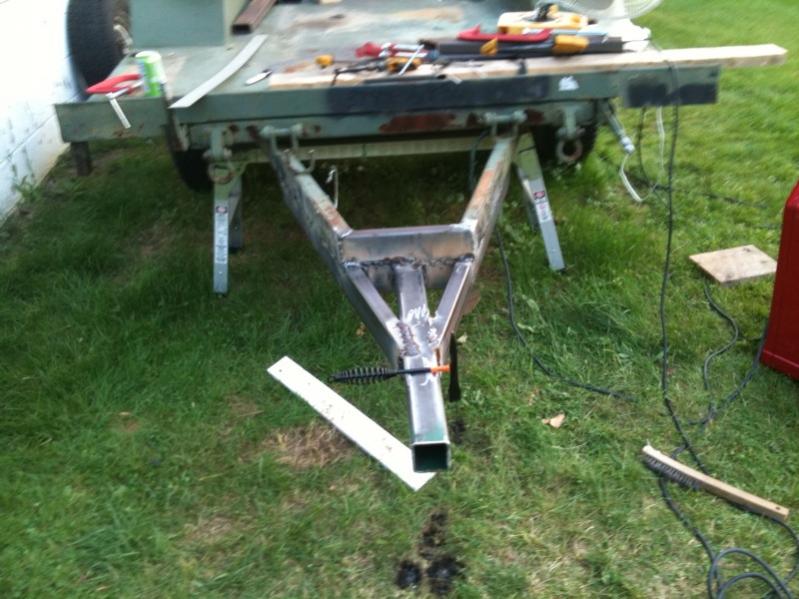 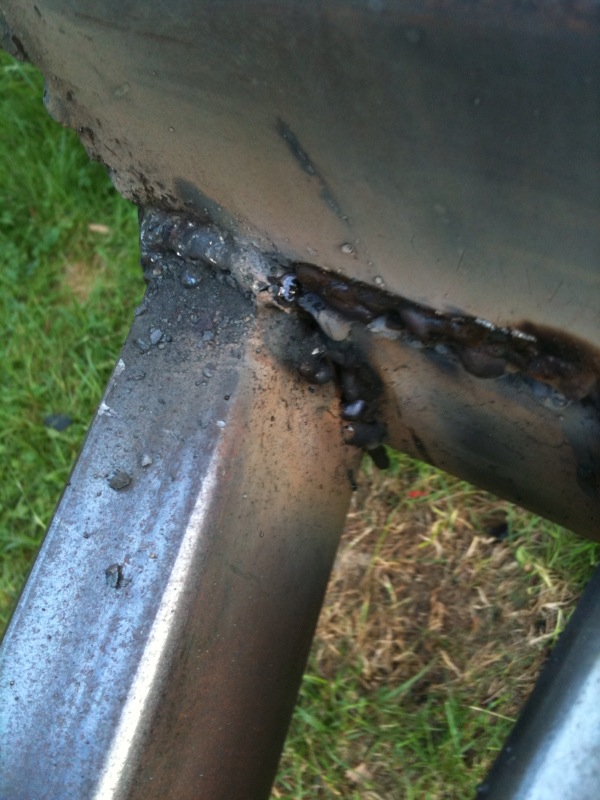 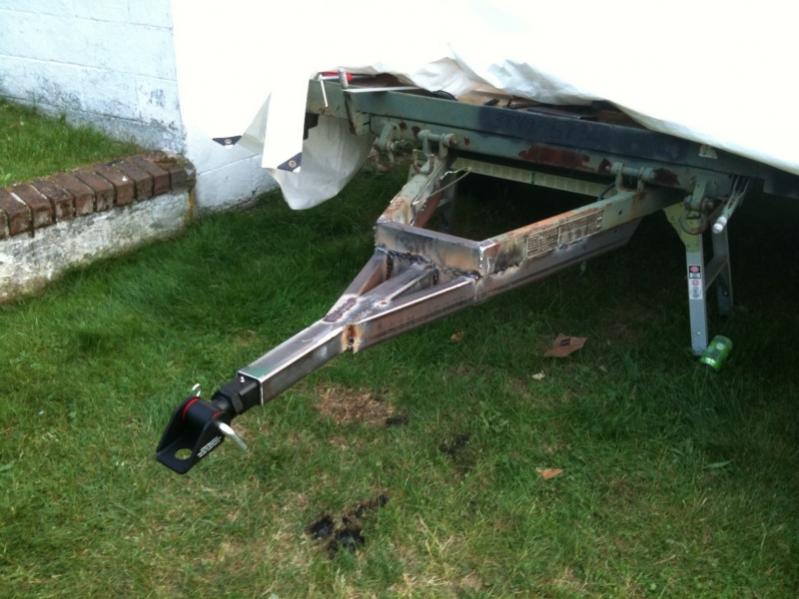 I used some 7018 on my rear bumper, and it worked fabulously as long as what I was working on was flat. As soon as I started getting vertical at all, the weld looked like crap and it started dripping all over the place.

(Disclaimer: Anything said above is merely my world view. I am not a doctor/lawyer/mechanic/<insert profession here>, nor do I play one on TV. I did not stay at a Holiday Inn Express last night. I take the Hipocritic Oath very seriously.)

x2 on ebags recommendations, those vertical welds can be tricky. Try some practice welds with the 6011 or 6013. Do a bunch of scrap first. Go through a box of rod just on the scrap. Once you get the hang of it, its pretty cool. You could also get a welding guy to come over to do some of it and show you a few things. That would help with some of the learning curve if you can find someone who is willing to spend a little time with you.
'94 FZJ80 MAF 5" comp lift, Slee shortbus, IPOR skid plate, sliders, snorkle, triple locked, york OBA, 12k winch, dual battery, HAM setup, CB, solar, fridge, full length rack, RTT, ARB awning and more......

This won't help you going left/right or right/left, but I found that when going up/down I had better luck with starting at the top and working my way down.

Lots of people recommend starting at the bottom and working your way up, that way you're pushing the weld pool up and it's easier to keep it running. My problem was that the weld pool would build up, and then a giant blob of molten metal would roll off.

Using the 6011, it's a fast freeze so I was able to better control it by starting from the top and working my way down. Ended up with a prettier weld, less heat in the metal, and no drips. The down side is you're not getting the weld pool as hot, so less penetration.

Again, an experienced welder wouldn't have that problem.

When using 7018, I did have to start at the bottom and go up, otherwise there were too many drips. It works better in short bursts, do a run until the weld pool starts building up too big to control it, then stop and let it cool down. Lots of restarts with that and takes a lot longer, but if you want to use 7018 that was the only way I could get it to work for me.


I also recently read on Lincoln's site that for material 1/4" or less, most of the time you don't need to do a side to side, weave, circle, etc. They suggested that for most jobs it was unnecessary, and just dragging the rod straight across the joint was sufficient. That of course assumes that your joint is fairly tight, if there are gaps you'll obviously need to bridge them.

I haven't tried that myself, but I can see how simply turning up the amps a notch or two would give you plenty of power to burn through the metal without having to do a pattern.
Last edited: May 27, 2010
'96 LX450

(Disclaimer: Anything said above is merely my world view. I am not a doctor/lawyer/mechanic/<insert profession here>, nor do I play one on TV. I did not stay at a Holiday Inn Express last night. I take the Hipocritic Oath very seriously.)

Thanks a ton guys!!

Headed out for more rod now and lots of practice