good write-up and tidy wiring. I've being using Auber gauges in my 74 for 5 years with on issues.

thanks for writing this up and nice work. I hope you got your engine issues sorted, do you have any more progress to report?

I now have six of these, not the double ones you have but the singles (SYL-1813), but they are the same thing essentially. Four of these I've tested for a little while (as EGT, boost, inlet water temp, outlet water temp), but like you I've had engine issues so my test time is marginal compared to the 4 years I've had them installed, but I can confirm that all worked accurately and rapidly, no lag whatsoever. Once she's running again, I'll be changing that configuration to EGT, boost, oil temp, water outlet temp, oil pressure and AFR (using the innovate LC-01). I love their programmablility, realtime reaction and versatility, although i also have a background in sensors and datalogger programming, so i realize their utter lack of anything plug and play is not for everyone, although they're really not that hard to use.


Fantom said:
The pins on the male fittings don't line up that well
Click to expand...

reverse the pins from male to female and they will work as designed.


Fantom said:
yes there are two ways of controlling that, one is manually, which requires entering the menu, finding the parameter and turning it up/down. The other is connecting your dash lights to a terminal, and it auto dims.
Click to expand...

i did this with a wire from my dash light circuit and it dims quite well, although this might not be the best option for those with sunlight on the gauge that have to drive in the daytime with lights on by law. mine are inset into the dash with a hood on top, so i can still read them well when dimmed during the day.


Fantom said:
it would be really nice to have a delay on the alarms though (for an engine kill on low oil).
Click to expand...

i would recommend not to do that. I think there is just as much chance that (1) any of the sensor, the eventual delay wiring/programming, the gauge, the relay or the wiring will fail, as there is of (2) something in the engine failing that will cause you to loose oil pressure. So to avoid your engine cutting out needlessly in a possibly dire driving situation because any of 1. failed and not any of 2., i say just stick to the individual buzzer and flashing light, and you can calmly bring the vehicle to a stop and inspect should that go off ... i don't think a few seconds will make much difference if the engine has lost pressure. Otherwise you will loose one of the major benefits of the older engines, i.e. not being overridden by an electrical circuit.

The other thing about these is the colour options... i had originally thought it would be a great idea to have a different colour for each sensor, and yes it does make it easier to identify and distinguish them out of the corner of your eye when driving, but i regretted it ascetically as i had all four colours and my dash looked like a christmas tree according to missus. so i eventually went with all green to match the toyota green lit dash items, which also appeared to glow the 'nicest' according to my eye... they all have a slightly different appearance in terms of softness and brightness apart from the color, so i recommend to get all one colour.

Just checked, and you can now get the dual channel displays in green/green, perfect!

It's always been my intent to have 2 X dual channel displays running boost, EGT, trans temp, and ext. temp, on my last truck and now on the new one, but so far it hasn't come together.

IanB said:
Just checked, and you can now get the dual channel displays in green/green, perfect!

It's always been my intent to have 2 X dual channel displays running boost, EGT, trans temp, and ext. temp, on my last truck and now on the new one, but so far it hasn't come together.
Click to expand...

I am running 2x red/green Aubers (I think four gauges all the same colour would be difficult to read at a glance). Oil psi, trans temp, boost, water temp. I have a separate Isspro EGT gauge mounted on my pillar that will soon be moved to the trim piece behind the steering wheel. The triggers on the Auber and the Isspro EGT can be wired to illuminate warning lights in the factory instrument cluster.

It's a good system, took a long time to put it together. I converted to a single DIN radio and put both the Aubers underneath it. 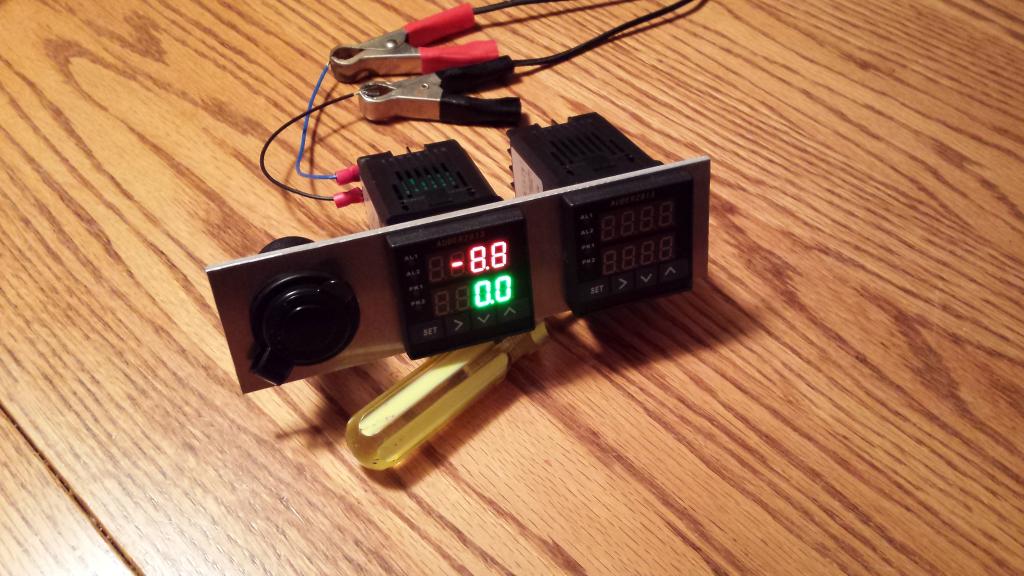 Douglas S said:
I am running 2x red/green Aubers (I think four gauges all the same colour would be difficult to read at a glance). Oil psi, trans temp, boost, water temp. I have a separate Isspro EGT gauge mounted on my pillar that will soon be moved to the trim piece behind the steering wheel. The triggers on the Auber and the Isspro EGT can be wired to illuminate warning lights in the factory instrument cluster.

It's a good system, took a long time to put it together. I converted to a single DIN radio and put both the Aubers underneath it.


That looks great, pretty well what I'd envisioned as well. Any pics of them in the truck?

Well it's been a while since I've had them and I am not sure if I am a fan. Granted I have not had enough time to properly (and as per manufacturer's recommendations) troubleshoot the gauges.
Here are the issues I've found with mine. both the EGT and the water temp are acting up and giving me wrong readings. Now the EGT I extended using regular wire, not their "EGT" rated wire and have not had a chance to replace yet. The water temp wire has also been extended but apparently it's OK to do that. The readings are on 2 separate gauges, so I have EGT and Boost on one and Oil Pressure and Water Temp on the other. It I whack the pretty box I made from the both gauges change readings, this is more so on the Water Temp. Leading me to believe the issue is internal of the gauge. I have been in touch with Auber but have not had the time to tear everything apart and test it. So in their defence I have not followed all the steps yet.

The other issue I have is direct sunlight and visibility. They are very hard if not impossible to read if the sun is directly shining on them. In some installations I am sure this isn't an issue. Most of the time in my application it's ok, it only happens occasionally.

I mentioned to them that it would be nice to have a time delay on the alarm functions. This would be especially useful on the oil sensor setup, and wire it to an engine kill switch. The time delay would be needed because without it you would never be able to start the truck unless you do a manual external switch from the alarm output (which is fine as well).

I have been very impressed with the speed at which the gauges read and honestly it doesn't take long to get used to looking at numbers as opposed to a needle. I now glance at them and know what's going on right away ...when they are reading correctly

Although, in the next truck I think I will go back to the ISSPRO analog setup.

IanB said:
That looks great, pretty well what I'd envisioned as well. Any pics of them in the truck?
Click to expand...

I can grab a pic tonight.

I was in contact with them before I bought my gauges and they were extremely hesitant to ship to me in Canada for some reason.

Madman has been around for a while but I dislike that gauge because it doesn't display all of the things at the same time. Price wise I think they end up being more expensive for a complete kit over the Auber setup. They do have a nicely put together package though and doesn't require any figuring out.

Hi, as a general rule you simply can't extend thermocouple sensor wires and expect them to work. The gauge is trying to interpret minuscule differences in the signal between two cables sent by the sensor, so the wire should be the same gauge all the way through, and most importantly have no joins whatsoever, as the type and mass of metal used at the join (terminals, solder, mass of wire etc) all needs to be the exactly the same so the resistance between both wires is precisely the same. In practice that's almost impossible to do, so I'm not surprised at all that your temp sensors are playing up, in fact I wouldn't even trust the 'correct' readings when you think it's OK.

I always measure beforehand and buy slightly more sensor wire length than necessary as a rule of thumb, and generally never reduce the length either just to avoid the need for re-calibration.

IanB said:
That looks great, pretty well what I'd envisioned as well. Any pics of them in the truck?
Click to expand...


Don't mind the bad paint and missing switches, I'm in a bit of a rush trying to get this thing back together for a trip. Gives an idea of the location though. 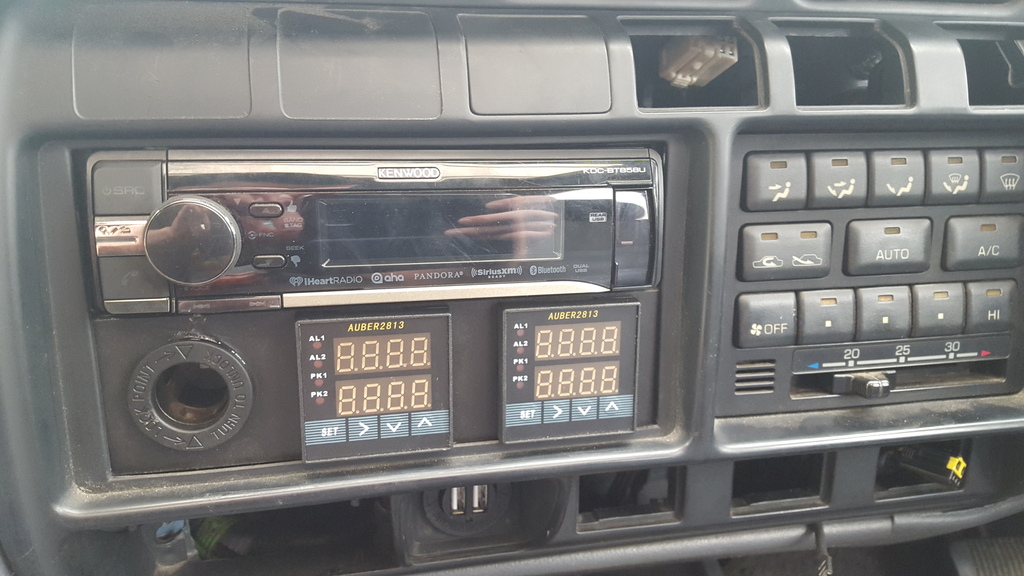 here's my christmas tree setup... the next time i take a photo they will be all green. 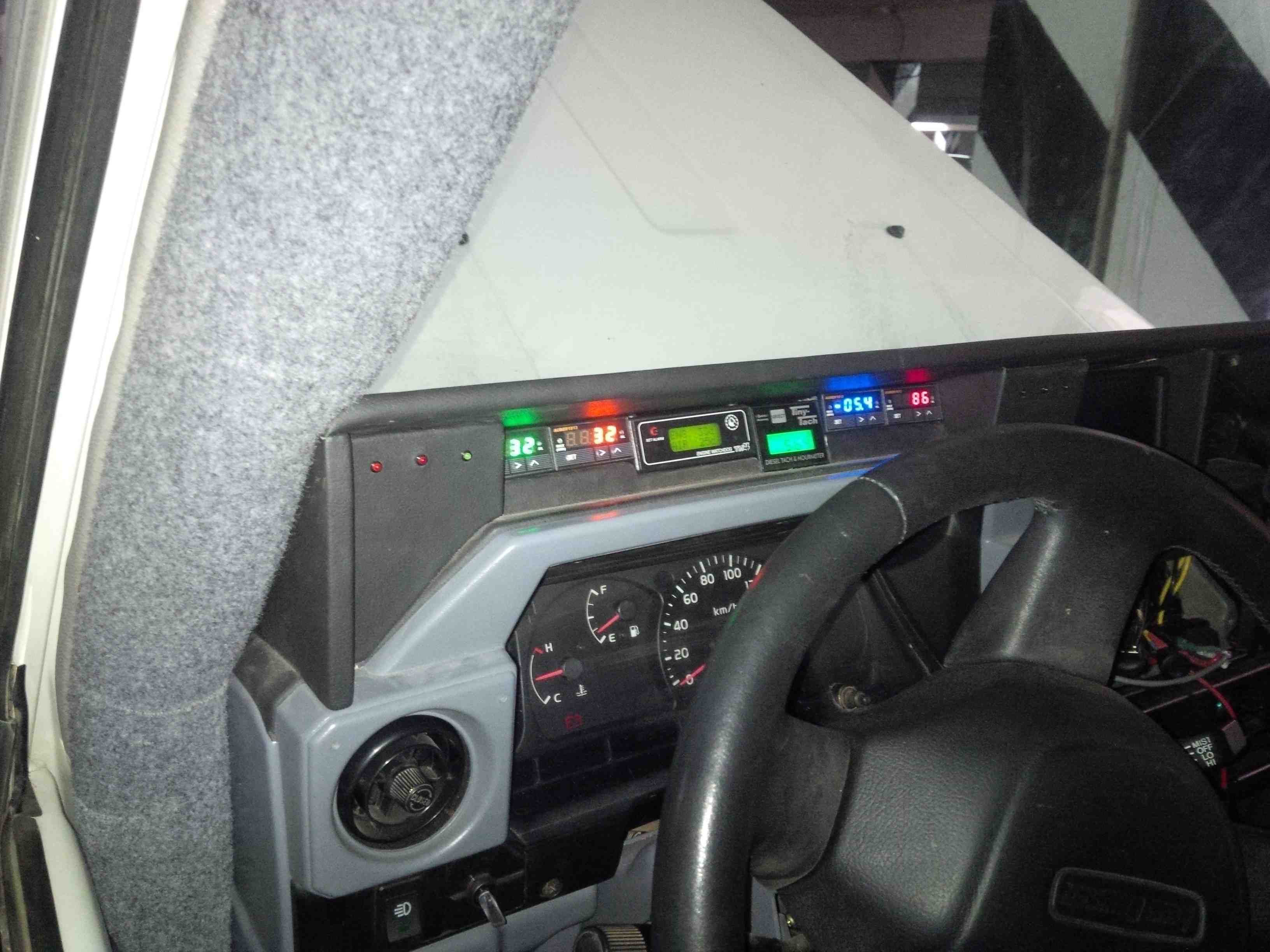 Great thread guys. Only two complaints I had were 1) I wish I had used red or green display instead and, 2) the depth of the guage is so significant placement is extremely limited. Otherwise very happy. Excellent value/product. 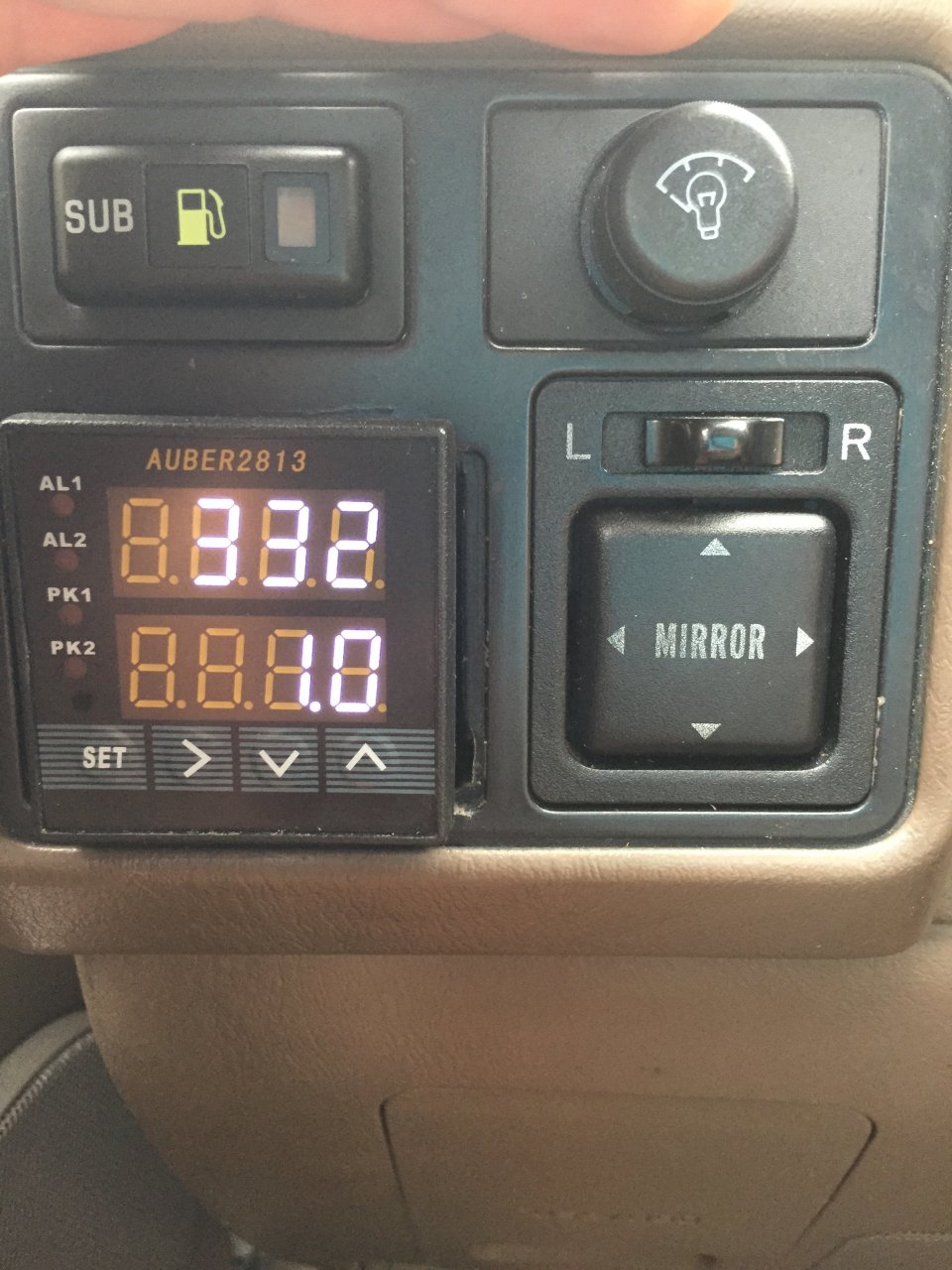 Super Glow vs Wilson Switch on a 1HDT Conversion