And I think I inverted green and yellow, that shows that this schematic is really a functional view of the carb and not a simple cut view, kind of the equivalent of a subway linear map

Great tech! I think you're right that the top hole/notch above the blue hole is for venting.
Last edited: May 2, 2022

To conclude this thread, a post about the secondary throttle on a F carb.
It's not related to the issue of this thread but as I found no one talking about it on this forum I though I would share it.

A lot of threads talk about the vacuum operated secondary on the 2F carb with a diaphragm and often the F carb secondary is referred to as "direct".
Yes the secondary throttle is directly controlled by the gas pedal, but over the secondary throttle there is another butterfly which in the F manual is referred as a "throttle valve". This throttle valve is very simply linked to a counterweight and so would open if there is enough vacuum to counterbalance the weight.
I thought it was kind of a funny, more direct, and archaic way to do the same thing than the 2F carb vacuum diaphragm.

It's probably also the reason the F carb throttle body is higher than the 2F one (1 more butterfly to fit in).

Another interesting detail, when you pull the choke (red arrows movement), a tab comes in contact with another tab of the secondary throttle valve (blue arrow) to block it from opening. So it prevents you from opening your secondary while your choke is pulled. 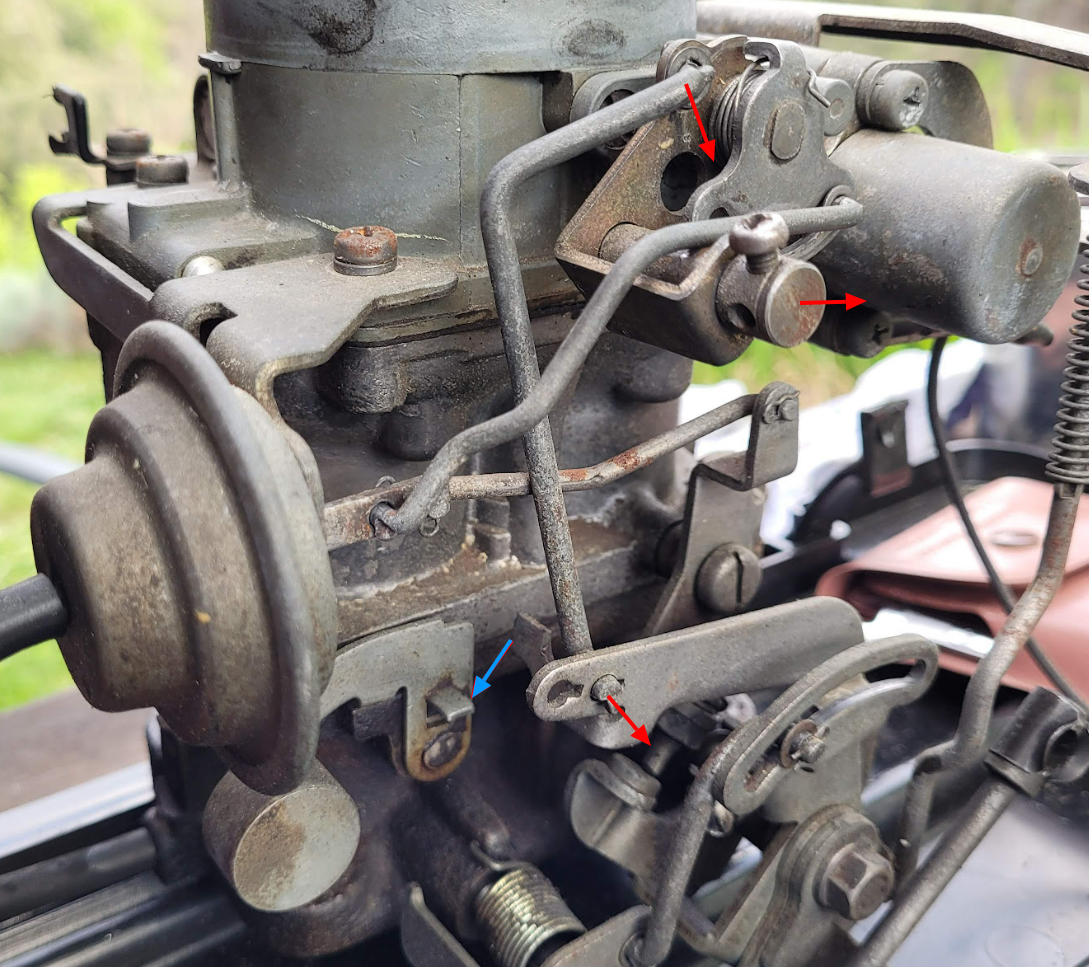 So, I reopened the air horn because the float level was set slightly high and because it seemed that sometime the needle valve was not closing properly.
I set the float a few mm higher and changed the needle valve (I had kept my original one as I thought it was good but now I installed the one provided in the Keyster kit to eliminate possible issues).

And here what I discovered.... 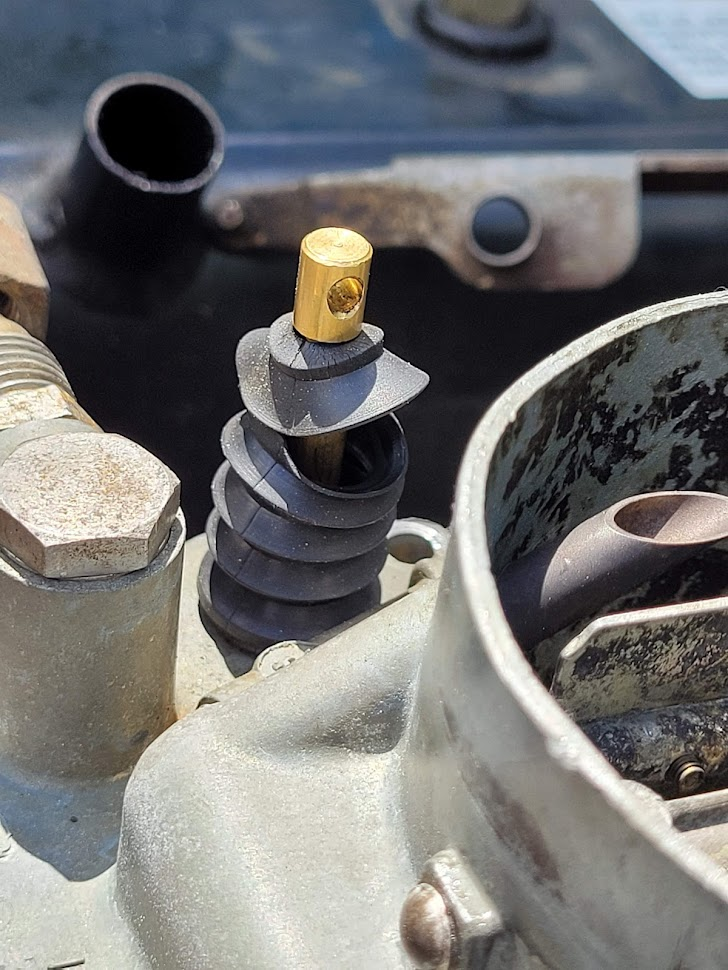 I had ordred it at Mike's carb part because people said on this forum it was better than the one in the kit and the part is listed with Aisan as supplier...
Not sure if I damaged it someway installing it (but it's more the bottom part that is physically abused to install it, not the top) and it almost look like the 2 halves of the accordion unglued each other...

Changed it for the one from the Keyster kit... Will see how many weeks this one last...

The top of that looks like ancient rubber with those cracks. I’ve had good luck with stuff from Mike’s Carbs. Bummer.

middlecalf said:
The top of that looks like ancient rubber with those cracks. I’ve had good luck with stuff from Mike’s Carbs. Bummer.
Click to expand...

Yes I'm not too sure what happened here... I have a 2nd boot from Mike's carb (always order a little more from the US to be sure to not miss something after...) and there is no signs of cracks or age.
Before the 1st installation I had also compared the boot from Keyster and Mike and didn't noticed anything special, different material feel in hand between the 2 but I can't say which one is what/best.

Maybe it was exposed to something that degraded the material used quickly? I hope it's not the unleaded...

The plunger is also from Mike and there was no doubt that it was far better than the one from the Keyster kit. Leather vs rubber, premium feel vs cheap, but also how it was pumping (tried both in the carb body).

So, some news of the benefits of my rebuilt carb after the first big trip with it (was France national 40series rally this WE, which is a 4 days WE for most people in Europe).

1) Engine braking is awesome now.
I used to not be confident in very steep down slopes because the engine was racing (when my idle was around 900-950rpm).
With the rebuilt carb currently set at 530rpm (should be 500 for a F but I didn't dare for now) the FJ40 is not moving a bit in rpm even in the steepest slope of the trial area. Actually compared it to the numerous BJ4* present and on a very long and steep down slope in the forest, they all had to use their brake to keep speed in check while I was accelerating to not die of boredom xD

2) Fuel consumption
I beat my previous record, on the road return journey from this rally I did 14.8l/100km (15.9mpg) which is a lot better than my previous record of 16.5l/100km (14.7mpg) before the carb rebuild. Actually I think it's even an awesome number in absolute for a stock 1974 F155 with mud tires and no free wheeling hubs!

A note on the fuel consumption independent of the carb rebuilt.
It's been multiple time that I noticed that each time that I do a multiple days roadtrip or event, far away from my home, I get way better fuel consumption in the return than in the outward journey or day-to-day driving. (And I don't live in the lowest place of France, actually quite the opposite)
To give some examples this trip post carb rebuild I did 17.1l (13.8mpg) in the outward journey and 14.8l (15.9mpg) in the return.
Before the rebuild I would generally do around 19l (12.4mpg) and my record of 16.5l (14.7mpg) was done on the return trip from a 2 weeks (off)roadtrip.

Engine is also more lively and will revs more easily, with less noise and vibrations. When in the outward journey I think "mhhh this engine is already not very happy at 90kph, how could it get to 130kph without explosing" and in the return it just creep to 130kph on a trickle of gas, no problem.


I often heard that old engine needs to be really hot everywhere to function at their best and that it takes a lot more time than getting the water to temp but for the F it seems that to function at its best it needs consecutive days of heavy wheeling. 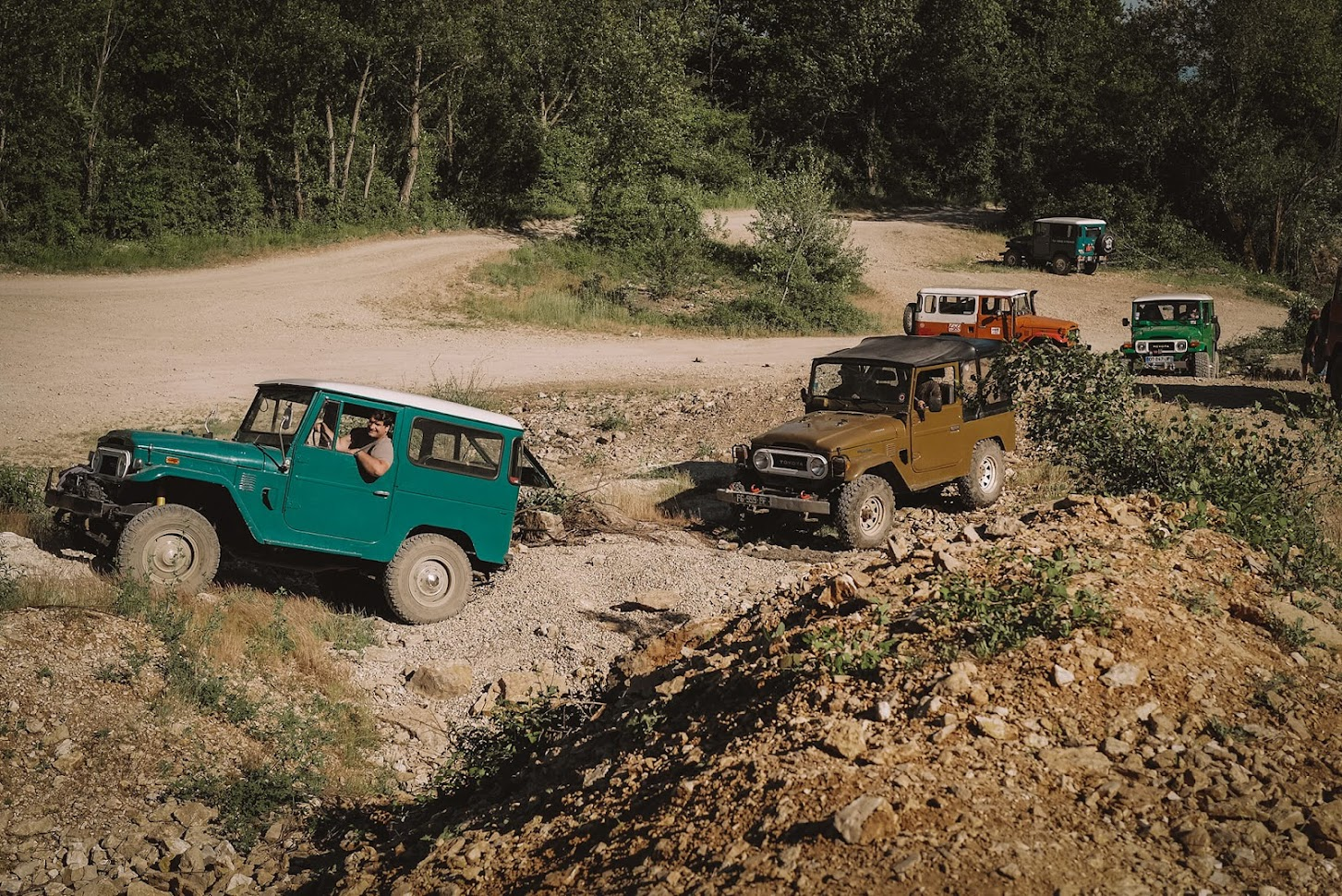