Carb was working ok but not able to get down to idle speed (minimum 800rpm and idle mixture screw doing nothing) so probably some junk blocking the circuit. Maybe an intermittent air leak also but not too sure about that.
When I was doing my tests on the carb I clearly tested and saw the pump spraying gas when pumping the throttle and it was working consistently.
Carb had never been rebuilt but top had been opened a few times by various Mechanics over the decades...

Anyway my carb was one of the last big thing untouched so I finally bought an ultrasonic machine to be able to clean it and started dissembling the thing.

I carefully followed @Pin_Head Youtube tutoriel step by step but surprise, where the ball bearing check valve is supposed to be (the one in upward direction just before the spray) there was nothing... 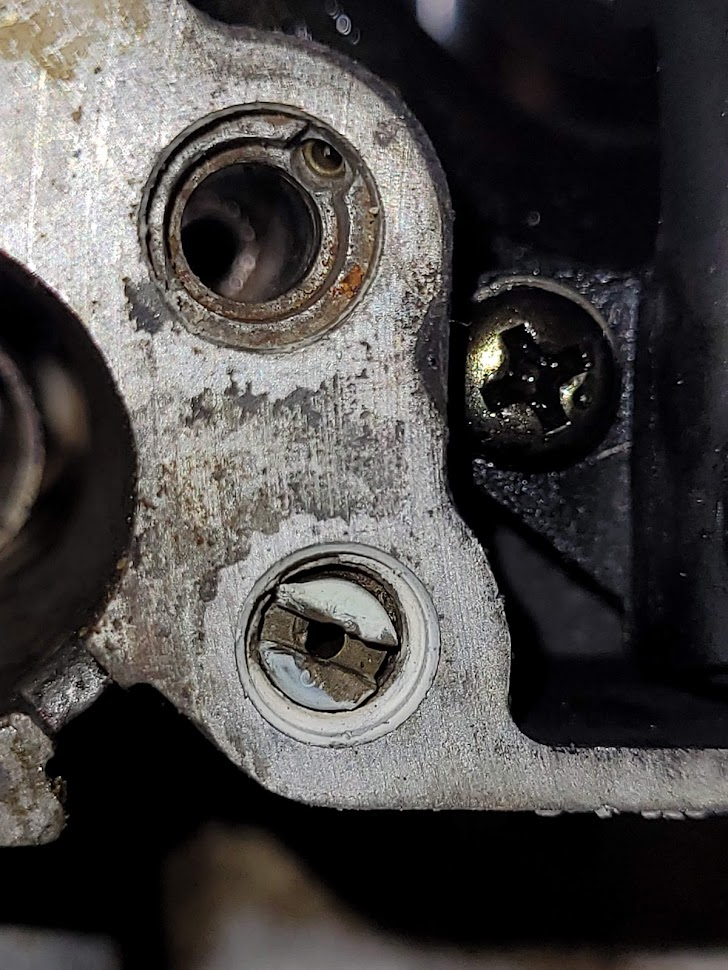 The spring, clip and ball under pump were present. 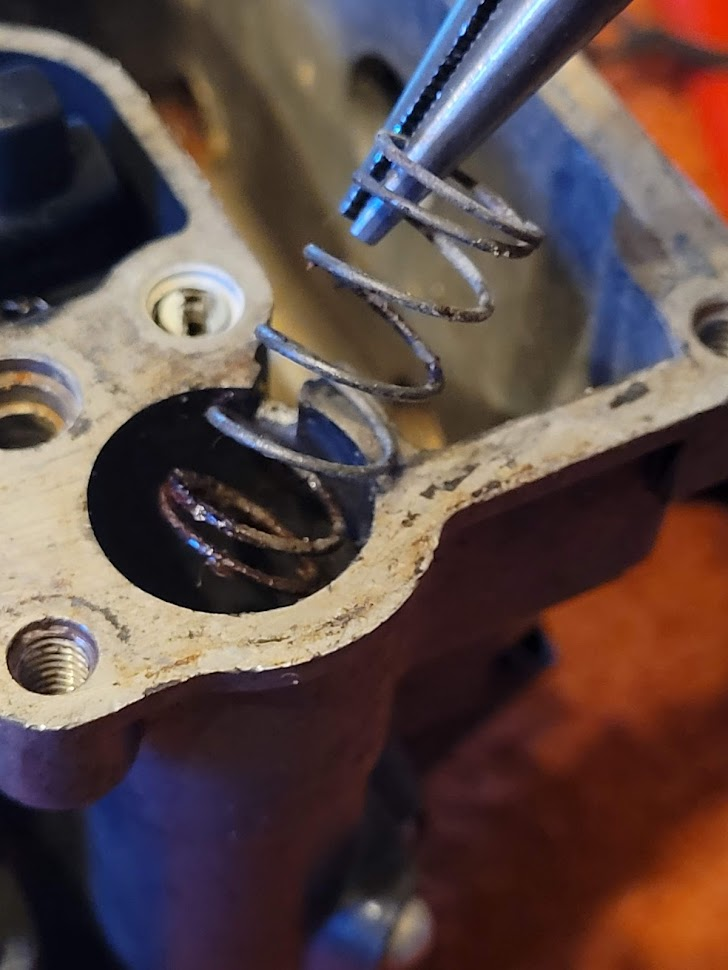 So, trying to understand the schematics and the fuel path, without this valve the pump could pump both air and/or fuel instead of only fuel. It seems it was working ok before so not too sure if this is a big issue to miss those parts ?
And also is there a source to replace those parts? Never seen them for sale and they are not included in my Keyster rebuild kit (except the ball). Maybe in other kits?


Oh and I was going to add that opening the carb the gasket stayed glued to the bottom part so could not have had the parts flying away without me noticing.
But looking at the picture just now, here what I see... The gasket was broken and not correctly aligned... If I'm not mistaken this is idle fuel path... -_- 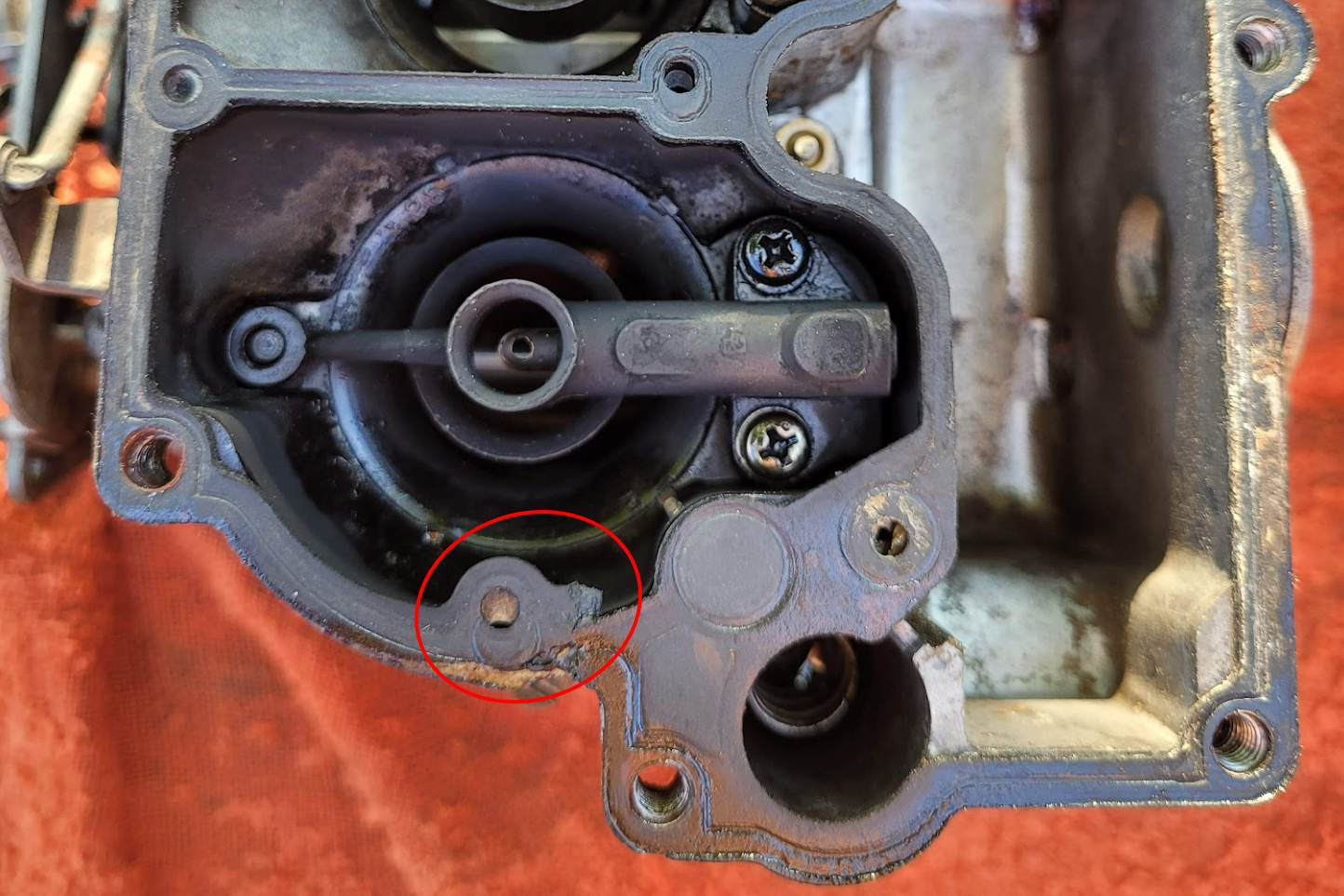 
And last problem I have the main jet for primary that is stuck in place and started to disintegrate... It's spending the night in WD40 after some time in the ultrasonic bath and I hope it will cooperate but it's hard to have a grip now -_-'

Maybe something here fits your carb?

Actually received an order from this site before to start the rebuild, for a few parts but I haven't seen the parts I need available.


sggoat said:
I would recommend Berryman's carb dip--you only need ~ 4 hrs in this stuff(Aluminum)--will clean it up really nice
Click to expand...

I searched for it and similar product but they aren't available anywhere in Europe.
Single importing them from the US to Europe is expensive and I guess there are restrictions for the shipping of this kind of products (and probably their import to Europe if no one sell them here).

Finally succeeded with the main jet... Had to be creative to have both the leverage and the push force required for this bugger. 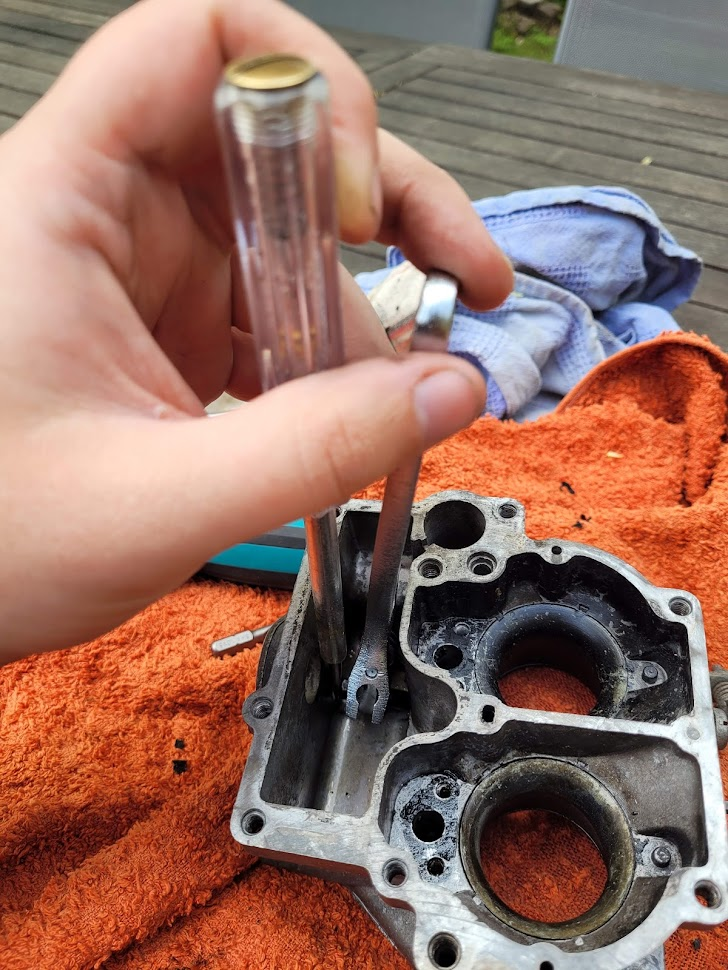 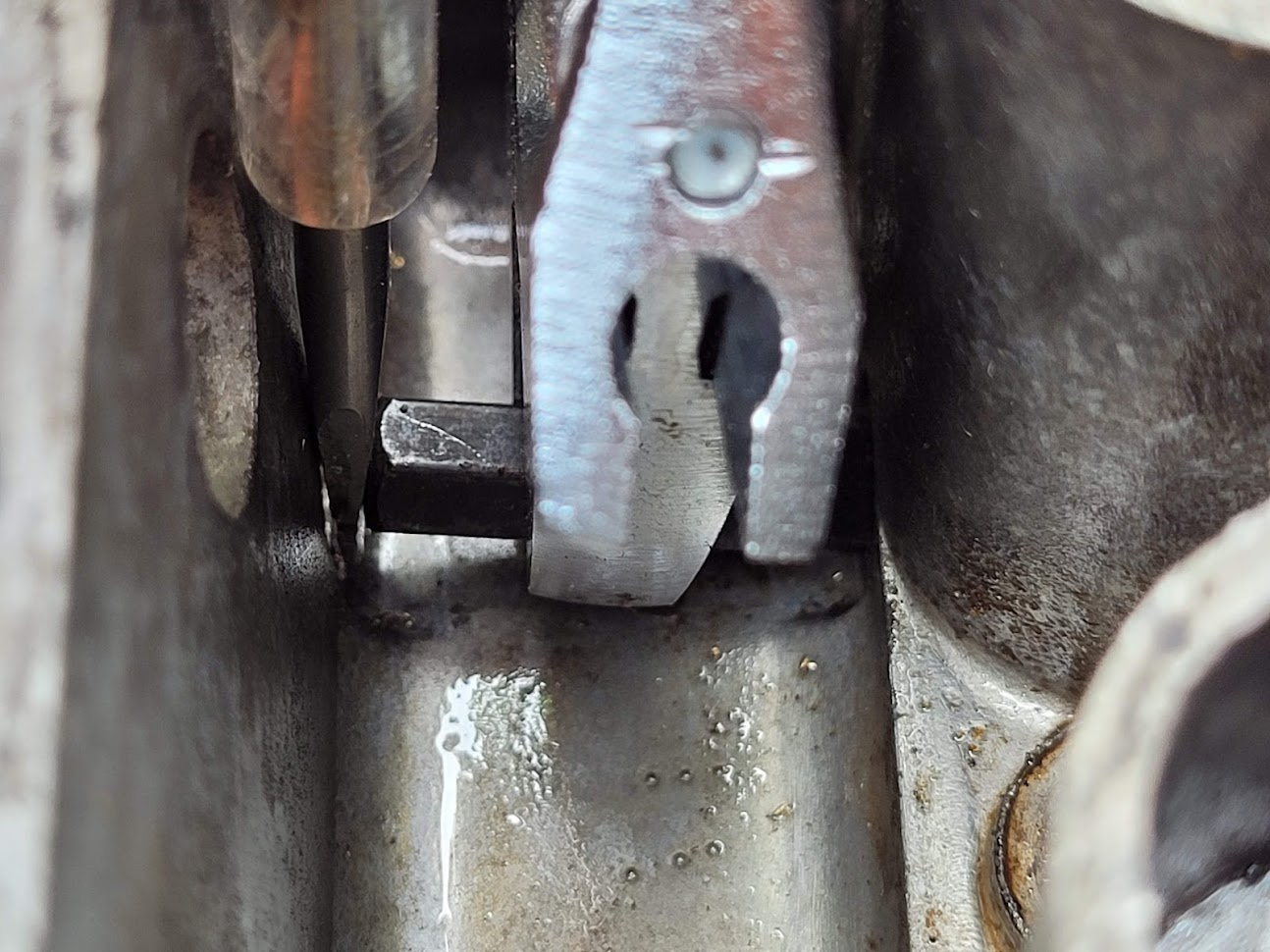 The poor jet suffered in its last moments of life... 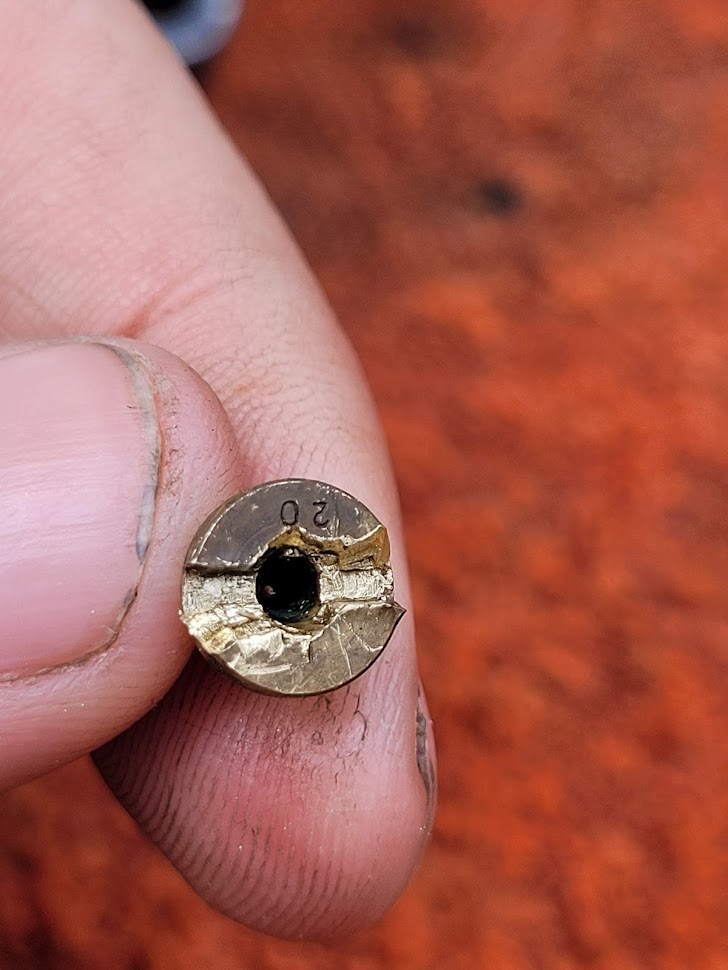 At first I was worried because, even after cleaning, I can only read 20 on it...
But it must be a 120, I don't see how it would be possible to be a 20 and the hole looks similar to the 114 of the spare altitude jet.


Should finish to clean by this evening... Then I will reassemble but still without the check valve for the pump.

Comming back to the accelerator pump. I'm trying to know how it was working before disassembly and if it will still work after.

I notice there are 2 passages between the fuel reservoir and the pump cavity.
The lower one circled in red is the one I expected, as in the schematics, it's the one with the little ball in the way to act as a valve and only letting fuel in when the pump is pulled up.
The one circled in blue I'm not too sure, it does not appear in the manual schematics (from a 1975 2F) and it seems it would just let fuel drip over the pump? Someone has an explanation of how those 2 passages are supposed to work relative to each other? 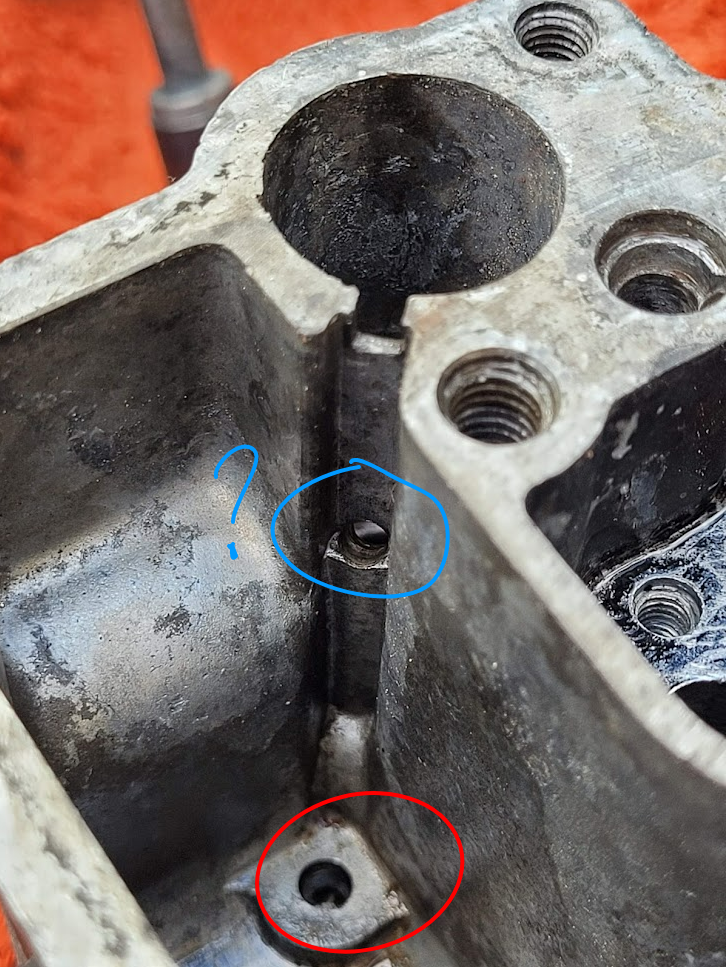 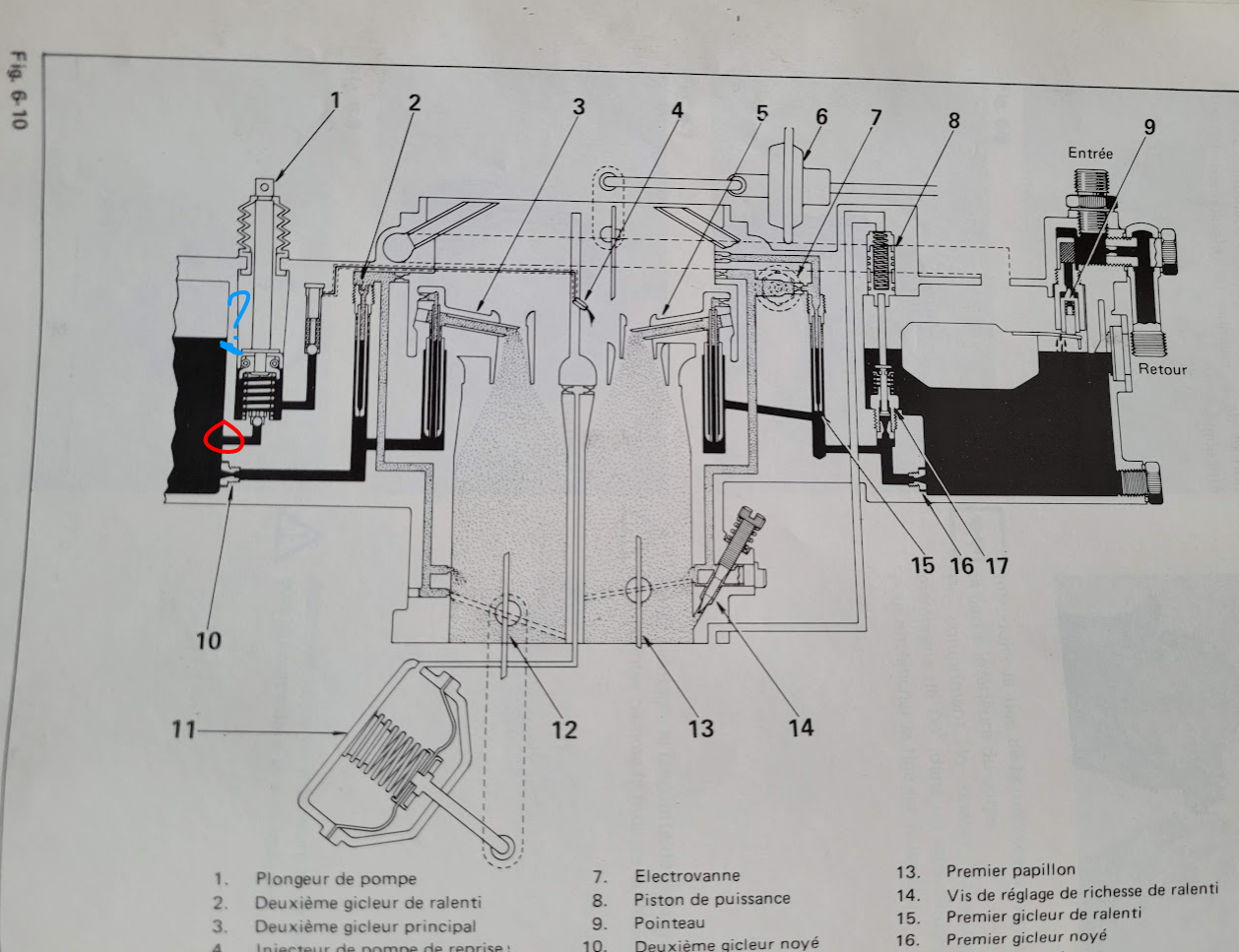 I think this blue hole is just under the supposed fuel level but hard to say for sure just looking at it.
Things it, the fuel level of my carb was set a little too high before the rebuild (at 2/3 of the sight glass) and I had all intentions to set it back to spec... But maybe it was what made the pump worked??

Mhhh, don't know
Yeah seems like a sloppy hack but in the same time I'm not convinced a sloppy mechanics would try his luck with drilling a carb

Also, the hole is in a trench and exactly where it is there is a a kind of dropout so it looks meant to be here.

1st picture took vertically over it: 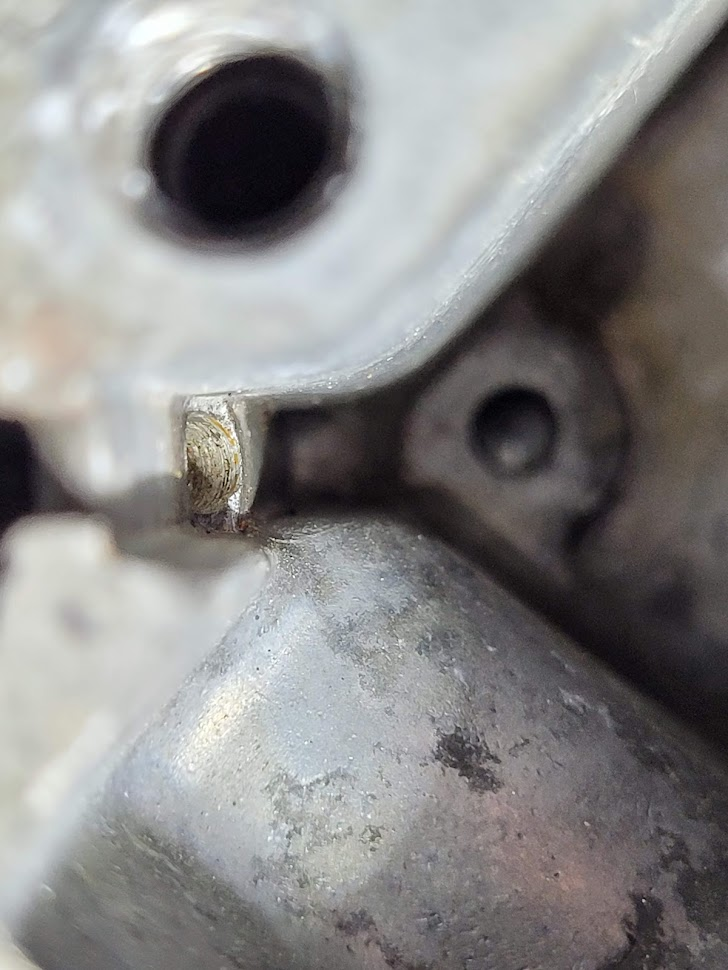 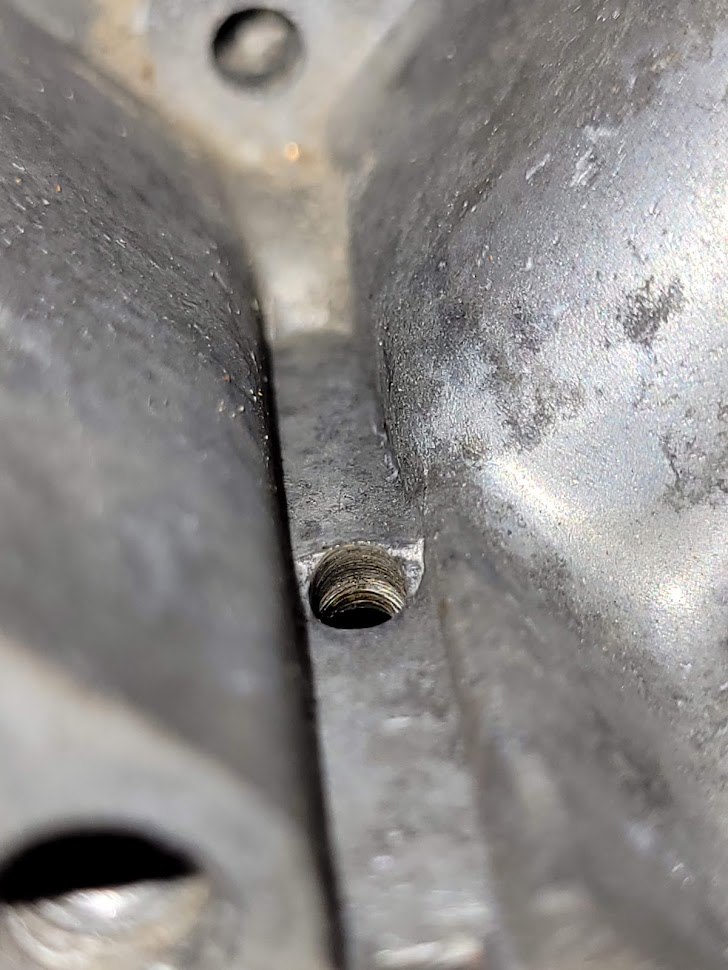 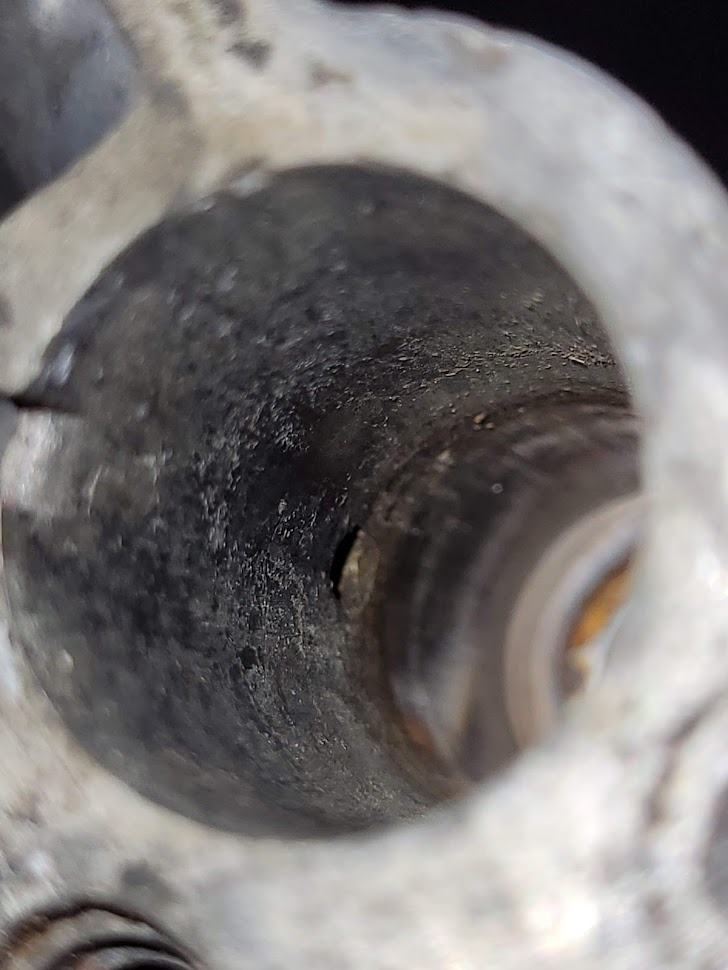 The pump can work without the outlet check ball as long as the fuel fills the well below the piston. It should work better with the outlet check ball and weight (or stopper and spring) because the fuel won’t suck back into the well and there is less “dead volume” to fill on the squirt stroke. You should get a ball in the carb kit and if need be, you can make up a weight from a short piece of rod.

It looks like the idle circuit in the bowl was partially obstructed by the gasket.

The upper hole in the AP well lets fuel on top of the piston. I have no idea what this is for and I never thought about it.

The secret ingredient in Berryman’s chem dip is cresylic acid, which gives it its unique smell. We can’t get it in California any more. Methylene chloride is a pretty acceptable substitute, but it evaporates quickly and has a high vapor pressure.
Last edited: May 1, 2022

Thanks for all the info @Pin_Head !

Yes I have a 2nd slightly bigger bal in my kit!
Ok so to do the weight I would use anything that is large enough it can't tip over but still let fuel pass? Any idea of the kind of weight to target?

Looking at the manual there is also a stopper over it, I'm guessing to avoid the weight moving all along the conduct, can do without it? 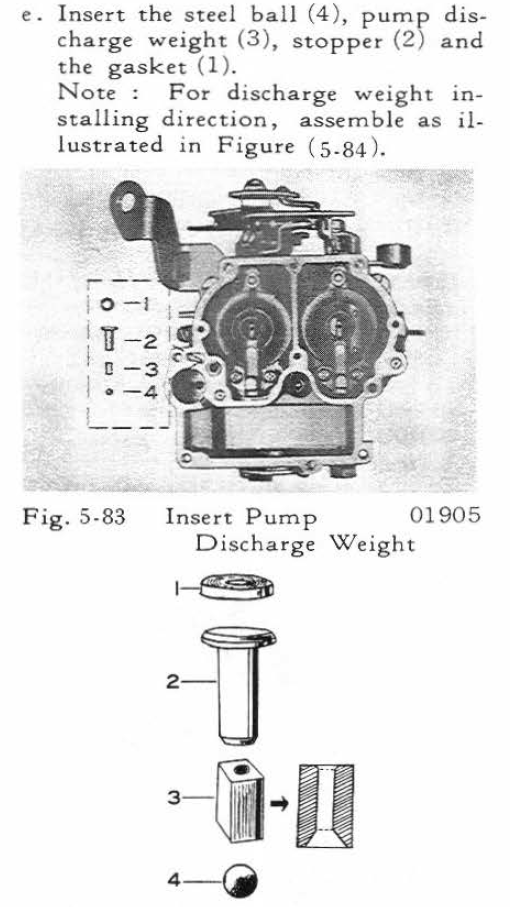 You sure your red circled hole (bottom) isn’t the secondary main jet (where does it go, have you blown air through it?) and the upper hole is actually the discharge ball check valve for filling the plunger? It looks threaded so something like a check valve would screw into it.

Try a cut off nail or screw.

middlecalf said:
You sure your red circled hole (bottom) isn’t the secondary main jet (where does it go, have you blown air through it?) and the upper hole is actually the discharge ball check valve for filling the plunger? It looks threaded so something like a check valve would screw into it.
Click to expand...

Yes I have checked and followed the path of every holes with some carb cleaner to be sure they are clear and to understand how it's working.


Pin_Head said:
Try a cut off nail or screw.
Click to expand... 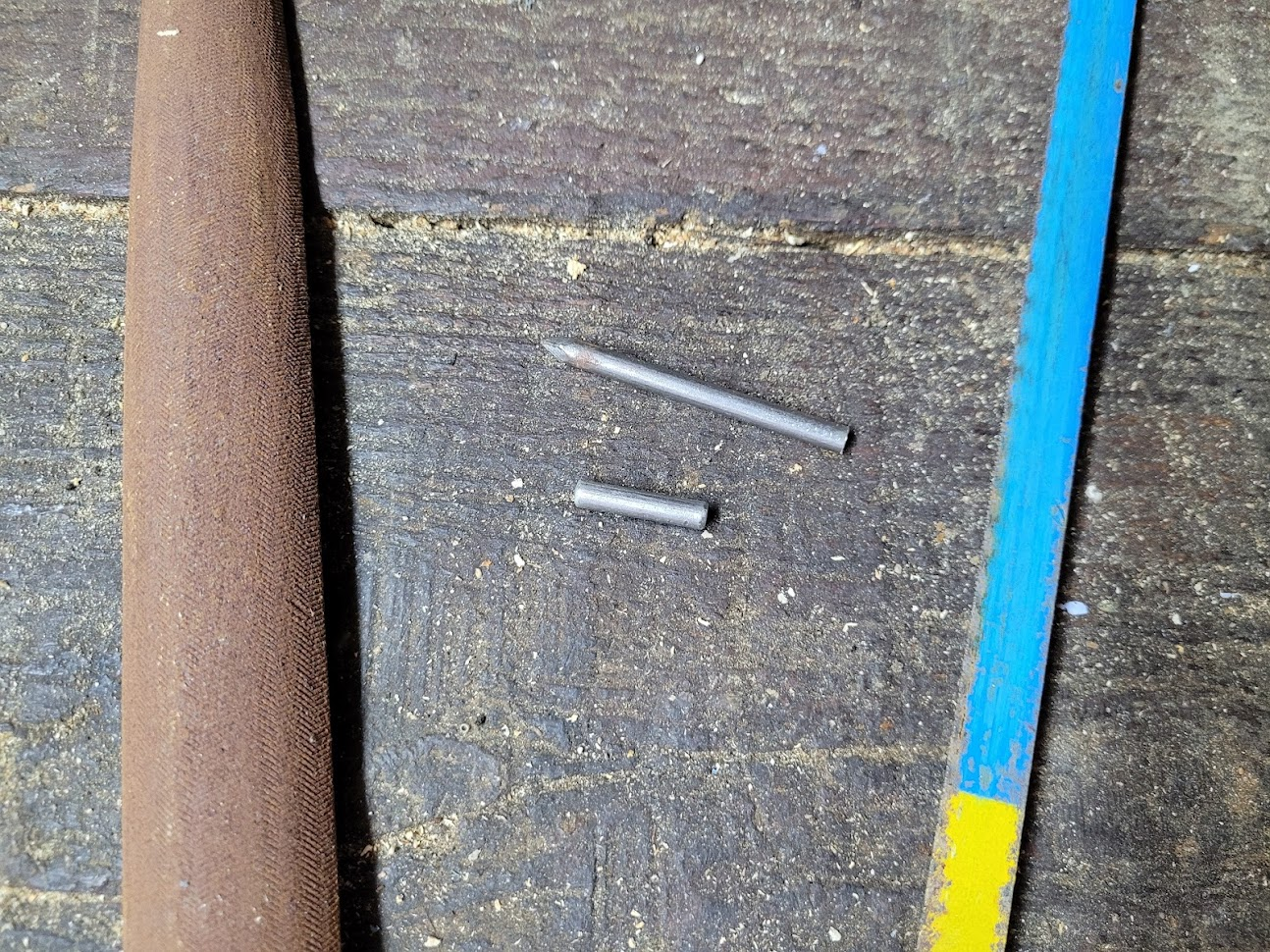 Used a 4mm nail and polished the tips after cutting. 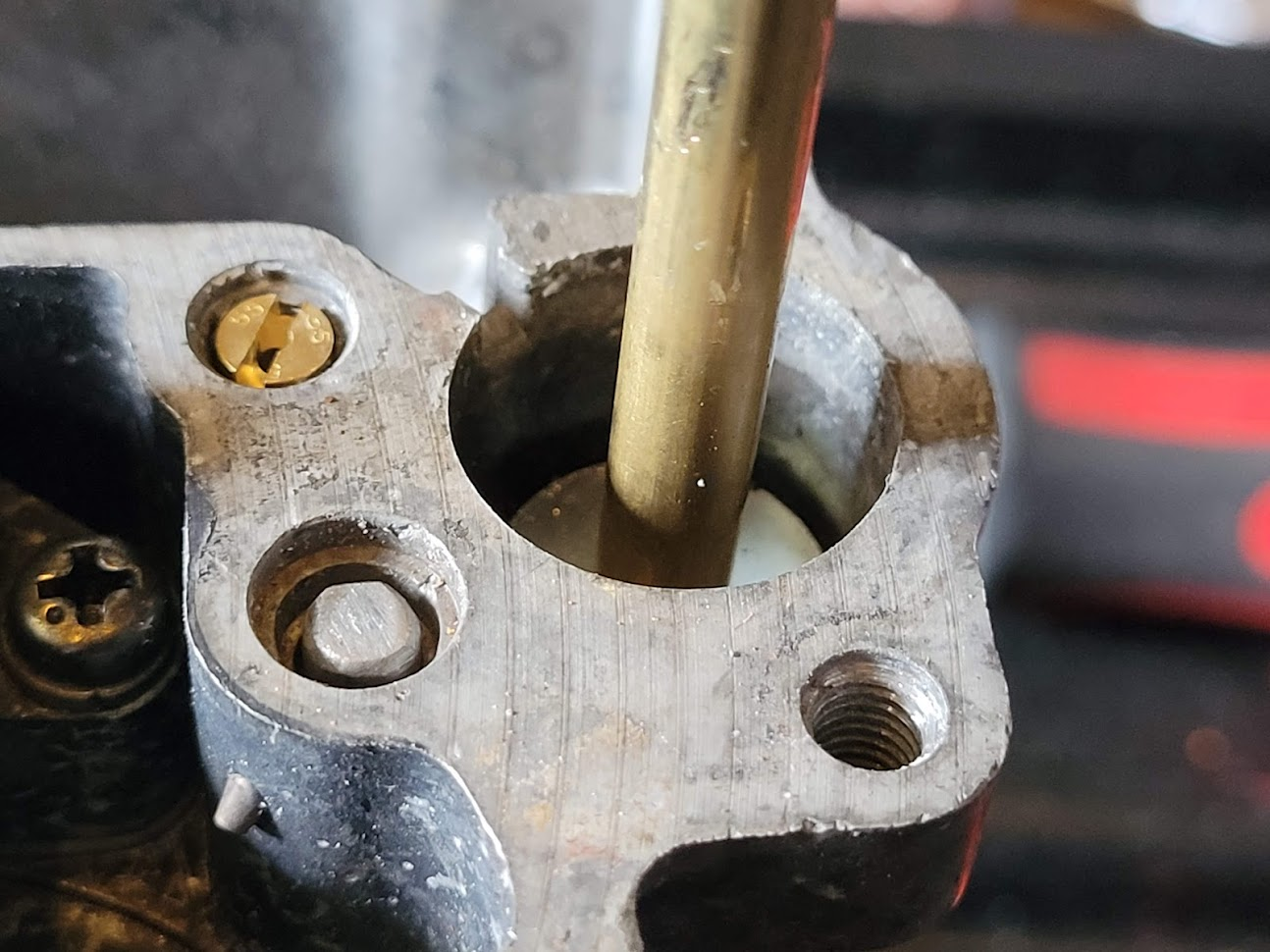 Carb is now reinstalled and my engine never ran that low, it was able to run at 500rpm not even completely hot.
It's now set at 590rpm, timing set and for the first time was able to drop lean.
It run smooth as ever, almost became silent xD


Thanks a lot for all the answers!

Oh and off course the carb running

FWIW - I think that upper hole is a vent, like a crank case vent, if it was not there then the upper chamber would build pressure which would effect the operation.

peesalot said:
FWIW - I think that upper hole is a vent, like a crank case vent, if it was not there then the upper chamber would build pressure which would effect the operation.
Click to expand...

I think the top one, higher than the blue circle, is a vent hole for the pump.
The blue one I thought about it, it is clearly just under the normal fuel level, as Pin_Head said it let fuel on top of the pump I think its role could be to keep the leather gasket of the pump wet and not let it dry.

Is that schematic pic above from a Toyota FSM and the correct one for your carb? If so, it shows two holes. You have two holes. I don't know, I tend to migrate back to the FSM when questions like this confront me. Maybe Mark @65swb45 will pop in, he's very knowledgeable about these things.

The schematic is from the 1975 2F manual, so not the F manual. The last F manual is from 1971-2 and often things related to the F.5 are closer to the 2F, but the main reason is that the F manual doesn't provide a cut view with all the fuel passages like the 2F manual, so does not provide a way to understand how the carb is working inside.
But yes it could have some differences between a 1974 F carb and 1975 2F carb (at least the vacuum secondary I know of) so maybe it's an explanation for the missing hole.


On my previous picture compared to the schematic the main jet hole was not visible, it was slightly more to the right than the picture. The 2 main jets are horizontal and lined with the bowl drains, I think this is a very common design of all double bodies Aisan carbs.

Here is how I identify all the holes in the bowl: 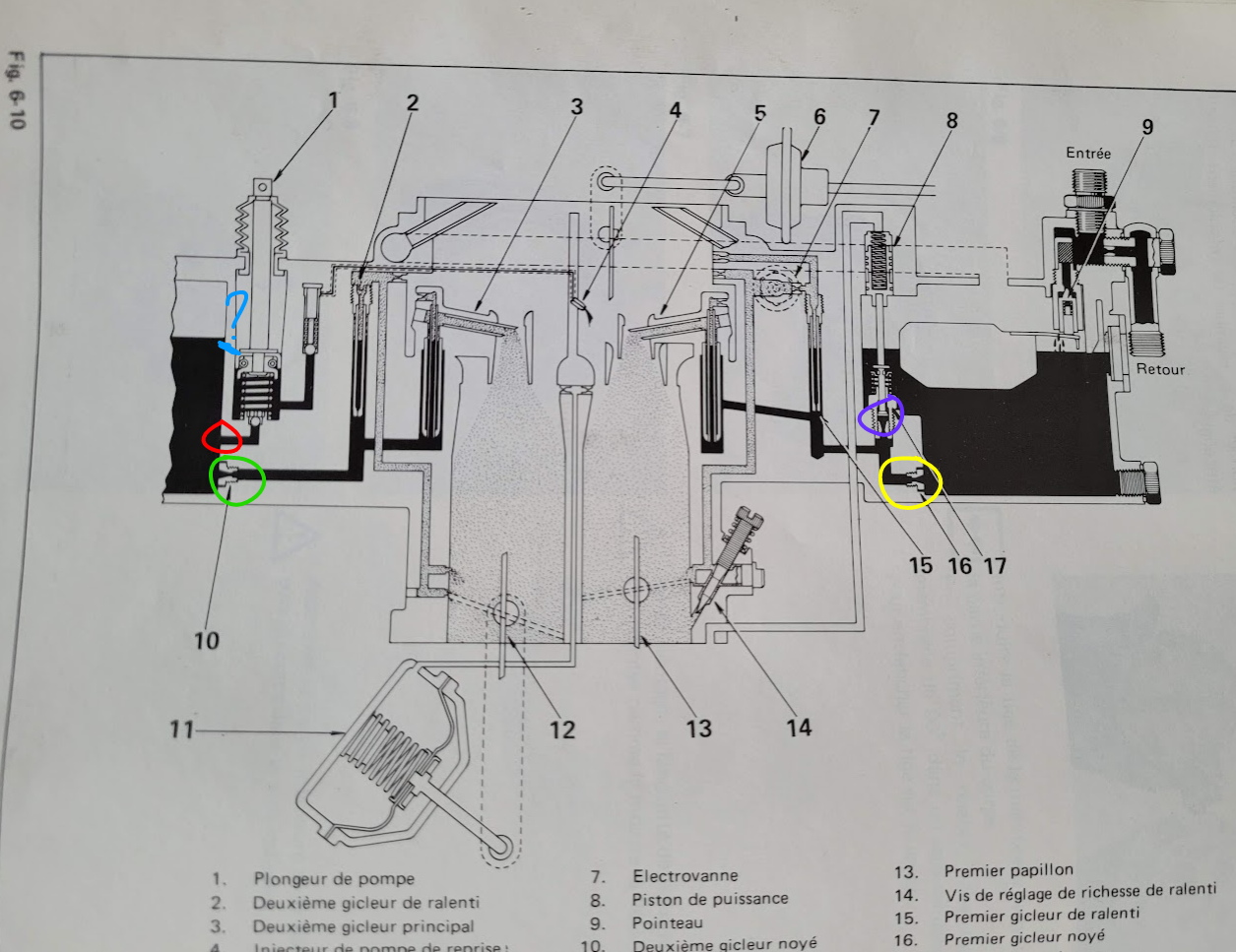 This picture wasn't made to look at the holes but it's my only one where they are all "visible" so even if blurred and dark it gets the idea of where they are. 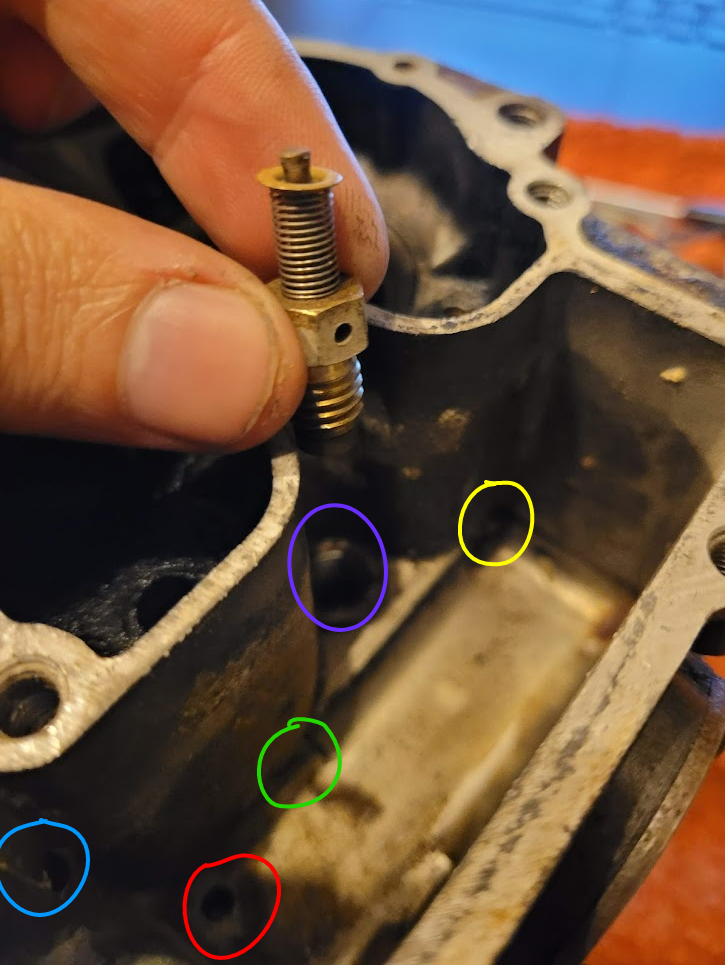