4 speed a scrapin and a chirpin!

Calling all transmission gurus!
A couple of days ago my stock 4 speed started making some new noises. It's had the usual gear noise of a used 35 year old tranny for some time now, but these noises rather concern me. Initially they only occurred in 2nd and 3rd, but yesterday they also started happening a little bit in first gear. Then I noticed this morning that 4th also started to chirp a bit but not much or for very long. It only happens when the tranny is under load and particularly when climbing a hill. Doing 65 on the freeway everything sounds normal. The syncros are working fine and it doesn't pop out of any gears. It sounds like something is scraping. I put the T-case in neutral and went through the gears, but other than the gear noise it was quiet. There is a fair amount of vibration in the shift lever. I have not had a chance to pull the drain plug as yet to see what might be accumulating in the bottom. I did check the levels on both the Tranny and T-case, both were full and nothing floating around in the top end of the gear oil. I've had to work late for the past week or so including through the holiday weekend so doing much about it has been difficult. I am taking Friday off so I can check it out a bit more. Definitely will be pulling the drain plug to see what's up there.

This is my daily driver, uh my only driver at the moment and can't afford to have it laid up for very long. I have neither a place to work on it or even a place to park for a more than a day. The ol' gal lives on the street. It seems like I need to rebuild the tranny or replace it with a rebuilt one. I'm not up for just putting another used one of unknown condition in. I called around and no seems to have a rebuilt one ready to go in except SOR, but they seem pretty pricey. However it would be down the shortest amount of time just swapping it out with one of theirs.

My main concern is that something is getting screwed up that'll leave me sitting by the side of the road. I don't know enough about trannys to be confident driving it. And I'm not smart enough to park it.

Any thoughts about what's going on inside?

Doubt it is the transmission. How are your motor mounts?

Degnol said:
Doubt it is the transmission. How are your motor mounts?
Click to expand...


Both the motor and TC mounts are shot, I've got new replacement donuts from Advance Adapters, that I was planning on installing this weekend. I don't doubt that the shot mounts are contributing to the vibration and possibly some noise, but there is definitely something up with the tranny.

That ain't gold in that pan! Looks to be both brass and iron shavings in there. Sorry for the bad phone photo, it was getting dark and it was all I had. I'm thinking shims? 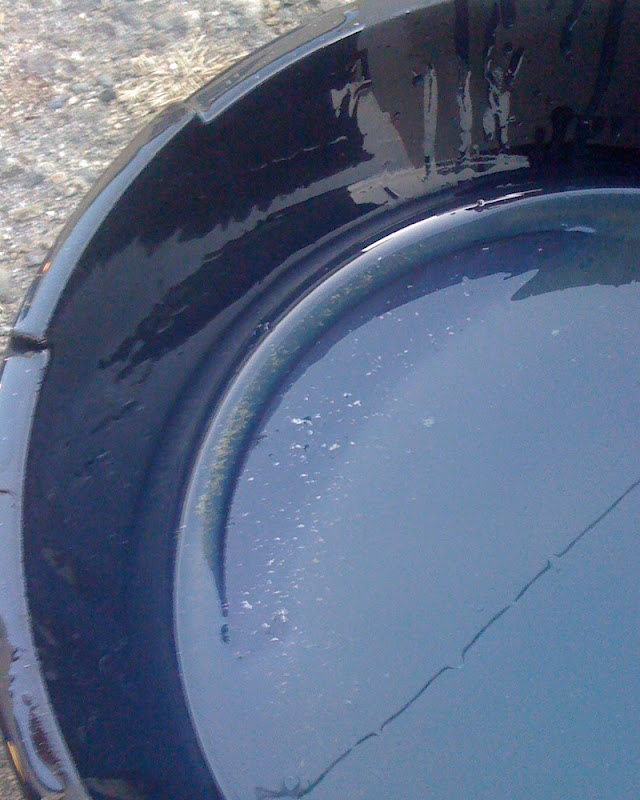 I'm supposed to be looking at a 75 with transmission issues on Friday. Coincidence?

If you're talking about AA donuts, that makes me think V* swap, which makes me wonder about floorboard clearance issues.

Have you pulled the boot off the shift lever to see how close the top of the trans is to the floorboards?

65swb45 said:
I'm supposed to be looking at a 75 with transmission issues on Friday. Coincidence?

If you're talking about AA donuts, that makes me think V* swap, which makes me wonder about floorboard clearance issues.

Have you pulled the boot off the shift lever to see how close the top of the trans is to the floorboards?


Not a coincidence Mark, that's me. You are correct about the floorboard clearance, she sports a 383 that a PO hacked in. The block is too close to the firewall and the shift lever is jammed against and puckering up the hole in the trans hump. The vibration is what got me looking at the mounts in the first place. I'm certainly willing to concede that's the cause of my vibration. I'm more concerned about the scraping noises and the shavings I found tonight in the tranny. She don't sound good.

A better description of the scraping/chirping noise that I'm hearing in the tranny would be very similar to a dull bit in a drill press running at a low rpm without the benefit of cutting oil.

those shavings come from the tranny or tcase? You said w/ the tcase in N it is quieter...bad tcase bearings? Have you tried it in hi and lo to see if the extra gearing makes more noise?

The shavings came from the tranny. I also checked the t-case, an Orion that just went in last fall. It was clean, no shavings just a bit of discoloration. Not a lot of color, just a bit. Orion seems to be good. We went through the gears in both 2 wheel neutral and 4 wheel neutral. The vibration was there through all the gears, more noticeable the higher the gear ratio. 4th being the most vibration. The scraping/chirping noises were not evident at all. They only happen when I put a load on the tranny, as in accelerating and especially when climbing a hill. I can feel a vibration in the tranny shift lever which coincides with the scraping noise. I don't feel the vibration in the t-case lever.

Strange since the TC shift lever is mounted to the transmission

Degnol said:
Strange since the TC shift lever is mounted to the transmission

My purpose in starting this thread was to hopefully gain some insight as to why my 4 speed was making new noise and what it might be. After finding shavings in the gear oil that I drained from the tranny, it seemed pretty conclusive that there is something amiss. I realize that it's pretty hard to diagnose a problem if you can't hear it or drive it for yourself. I had hoped that it was a problem that has occurred before or enough that someone could give me a definitive answer. Evidently that's not the case, and it's more of an anomaly. Which is good news as I was under the impression that these 4 speeds are pretty tough. I've got today off, so I should be able to get some answers. My intention is to line up a rebuilt 4 speed and hopefully a Cruiser mechanic who has time to swap things out for me. I appreciate everyones comments! If anyone knows of a good Cruiser mechanic in the LA/SoCal area I'd appreciate hearing about it! I've talked to both Mark's Off Road and Jim Dickey, but both are swamped right now.

PixelWrangler said:
If anyone knows of a good Cruiser mechanic in the LA/SoCal area I'd appreciate hearing about it! I've talked to both Mark's Off Road and Jim Dickey, but both are swamped right now.


I'd give Noah a PM. He might be able to help you out and he's up near Oceanside so not too far from LA/OC area.

A bit of relief!


pavieSD said:
I'd give Noah a PM. He might be able to help you out and he's up near Oceanside so not too far from LA/OC area.


Thanks for the info, I didn't realize Noah was wrenching full time again. He's probably a little too far away for me to drive comfortably with my gal in the condition she's in.
This morning I had the opportunity to stop by and see Jim Dickey. He listened to it as he drove around a bit and also went through all the gears while the T-Case was in neutral. As well as in 4 Hi and Low. I showed him the gear oil with the sparkly stuff in it. He said while it wasn't good, I should have some time yet before she blows. He's aware that it's my only rig. If it starts getting hard to shift or pops out of gear, then I should stop driving it. Unfortunately he's tied up with a couple of other jobs that he's already promised, but should be able to get on it in a couple weeks. He's got a couple of 4 speeds on the shelf and rebuild kits handy, so once he's freed up he'll be putting one together to go into my rig. He gave me a price for the rebuilt tranny and install that was less than SOR's rebuilt 4 speed price.

I feel a bit of relief having a somewhat definitive answer to my problem. Now if it'll just last that long. I'm happy to have AAA! On my way over to Jim's I noticed that the scraping/chirping has almost gone away. Evidently whatever was being chewed up has been digested and left me with noisy gears.

It doesn't sound as bad as the scraping did, but still...

Thanks again for all of the input, I'll update when I have some more answers, and photos of whatever was going on inside. I'm off now to replace those mounts!

All is well again!

Well the tranny indeed lasted "long enough". A few days after my last post, the scraping sound disappeared completely and I just had a very noisy 4 speed. If I wanted to be "that PO!" it could have easily been passed off to a noob as "just a 36 year old tranny and they make noise". But I'm not... Jim rebuilt one of his 4 speeds for me, and the old one was put on his shelf to be rebuilt at a later date. To put a wrap on this thread, the problem with the old tranny was a bad output shaft bearing and most of the syncros were shot. I believe the scraping and chirping noises I heard were the destruction of the syncros. I wasn't able to get any photos of the innards as promised, but trust me, there was a lot of play in that output shaft and a lot of sparkle in the gear oil! The last couple of weeks that it was in, it had begun to pop out of gear occassionally, so I just got used to holding it in gear as I drove, particularly on deceleration. No problem. It never did become hard to shift, always popped right into gear, no grinding and no forcing it in.

The replacement 4 speed wasn't in perfect condition either, Jim replaced the output shaft on it, as well as the 2nd, 3rd, 4th gears. He said it had gotten very hot at some point. When finished he said it was as nice a tranny as he's seen in a while! Happy about that! As far as driving it, NICE! Shifts smoothly and no noise. I can hear that SBC again!

From a four-speed to a five speed and exhaust