1980 BJ40 from Costa Rica with turbocharged 3B. Good condition mechanically (aside from alternator). Previously a B engine, but swapped by a PO with a 3B + Nissan turbo sourced from Canada. Unknown miles on the engine, but I encountered no signs of any problems requiring work when driving it. My guess would be that it was rebuilt in the not-too-distant past.

12v system, metric instrumentation (reads 57096 km, no indication how many times it has rolled over). Stock gearing, locking hubs. Previously CA registered diesel, so I imagine it would do fine there again. Currently has 4 speed trans installed.

Photos were taken recently, save for the one obviously outdoors which I'm including to give an idea of what it looked like previously, or what it looks like in a more assembled state. Everything aside from that was shot indoors under artificial light, so coloration is a bit skewed. This is most evident in the shots of the tub interior, which features blue and red primer extensively, with areas of black bedliner I haven't removed in other places. Don't confuse the red for rust, but there is some rust in there as well.


Known issues:
- Alternator & mount require replacement (alternator is not currently on truck). System is set for an externally regulated one, I've got an internally regulated one that I'll include. It's a little sloppy, so my suggestion would be simply to do a NPR box truck alt swap on it and sell off the stock vac pump.
- Breaks work well, but can be spotty for maybe a minute immediately after startup. Probably a matter of ensuring the vac reservoir has no leaks.
- Tub is in worse shape than originally assumed. Under doors & around the custom fender flares are the worst, rust-wise, but the entire thing is covered in small dents, presumably to help with filler putty retention. There's a ton of filler putty on it, and it'd be best to just deal with it properly, although it's a lot of work. Could just touch it up and cover it up if you wanted, I imagine it'll go quite a while before the tub is rusted out to worthlessness.
- Rear main seal seep
- PS box seep
- Ignition switch is dodgy, had occasional problems requiring a jiggle to get it to engage. Cropped up maybe once every month or two when I was driving it.
- Warm climate vehicle - NO AC OR HEAT.
- Numerous other minor items, as would be expected from a vehicle of this age.


Barring the fenders, most of the body parts in use are in pretty good shape. As photos show, 1 set of front doors and ambulance doors were in routine use (and thus have matching paint). The fenders on it have rust issues near the cab, the spares are in better shape. The spare hood is probably in a bit better shape as well, but there aren't any major flaws with the current one. It doesn't have the windshield blocks though. Spares for body sections are included for everything but the panels between the fenders & hood (don't remember what those are called offhand), front doors, the tub, the windshield frame, hardtop sides & top.

My intent was initially to do a full frame-off rebuild on it. Wasn't interested in taking it back to stock, but I did want to go over it with a fine tooth comb and handle all rust. The alternator mount had worn to a point where the thru hole was oblongated and the mounting bolt had been warn down, allowing play. This in turn caused off-axis stress and wore the bearings out, causing alternator failure. Prior to that I used it as a daily driver. The previous externally-regulated alternator was a design that didn't allow easy access to the brushes for maintenance, so I opted not to refurb it and contacted EBI cruisers in Canada to obtain another one. Unfortunately, the old course-spline alternators are only available used, and the replacement I've got is servicable but has enough slop that it may not be a long term fix. This being the case, I decided to wheel the truck into the garage and set to work. I would suggest doing a NPR box truck alternator swap as they have vac pumps that will work, output better amperage, and are available new.

Upon chipping off some of the bondo in areas where cracks were starting to show, I found the tub to be in worse shape than expected underneath. I also stripped out a good portion of the bedliner. I suspect most of the tub can be saved, but it is best handled by someone who enjoys and is good at sheet metal fabrication. I ultimately decided to go with an Aqualu tub, but after saving up for it I took a good hard look at the project and decided that the lack of spare parts in the US and associated long turn around time to get them shipped makes it unsuitable as my sole vehicle, and I don't really want two vehicles at this point in time in my life.

Most spare body items are currently piled into the back of the tub for transport, though they'll need to be fastened down. Due to clearance issues with my garage doors, the cage has been removed (as have the seats). Given the amount of spare parts I have, this will require a truck and trailer to haul off -- I can't wedge all the spare stuff into the tub. While the truck could be brought back to running status just by replacing the alternator and mount, this is best served as a project vehicle for someone looking for a mechanically solid base to build a truly great rig off of.

Asking $10,000 OBO. It's been sitting in my garage undergoing minor work for a few years already, so I'm not in a huge rush to move it. Given the fact that it's mechanically reasonably solid and comes with a ton of parts, I feel that this is a reasonable price. Somewhat less than what I paid as an acknowledgement that the tub is in worse condition than anticipated and that it is currently not turn-key.

Previous owner's ad is visible at For Sale: - 1980 BJ-40, 3B engine, turbo, full roll cage, if you're interested in some of the history, and is the source of one of the only "put together" photo I've listed. That's exactly what it looked like right up until I garaged it, so it gives a better idea of what the hardtop looks like. 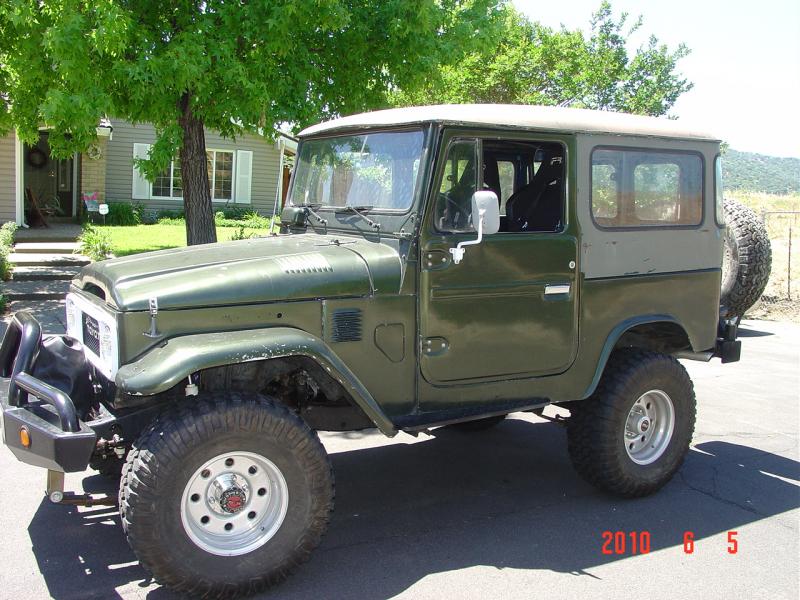 As it sits right now: 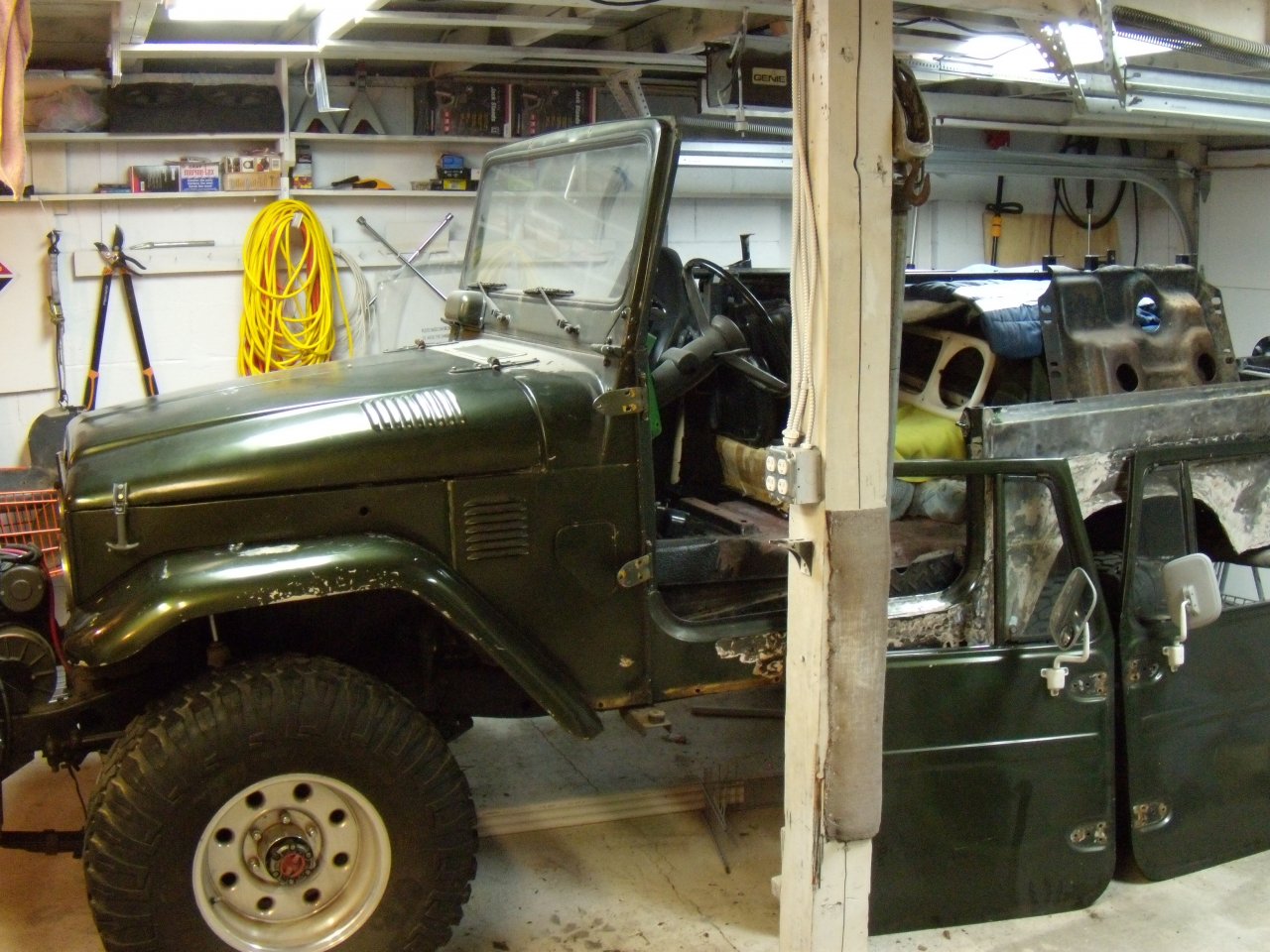 Before I put the front end back on / loaded up parts in the rear: 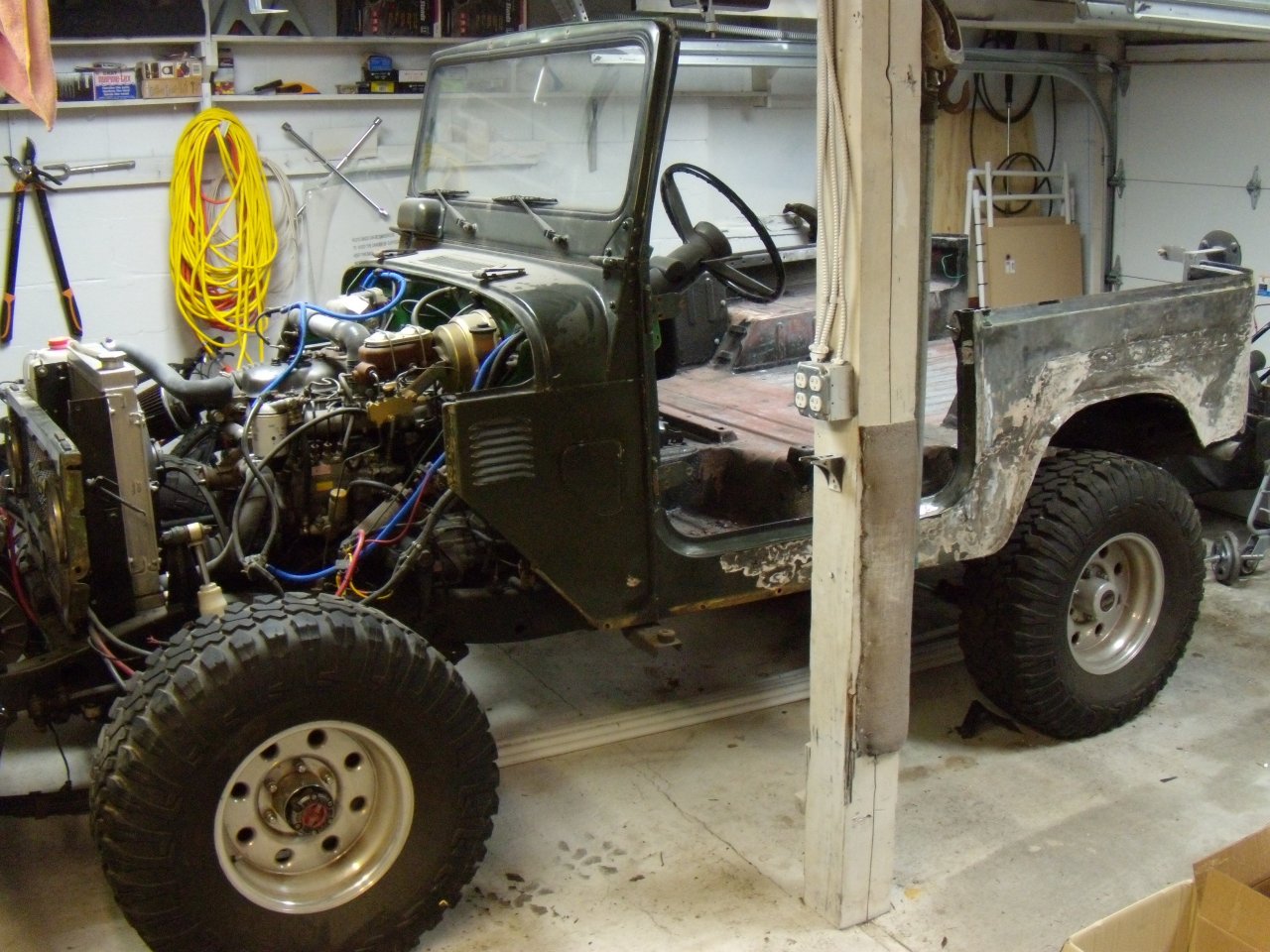 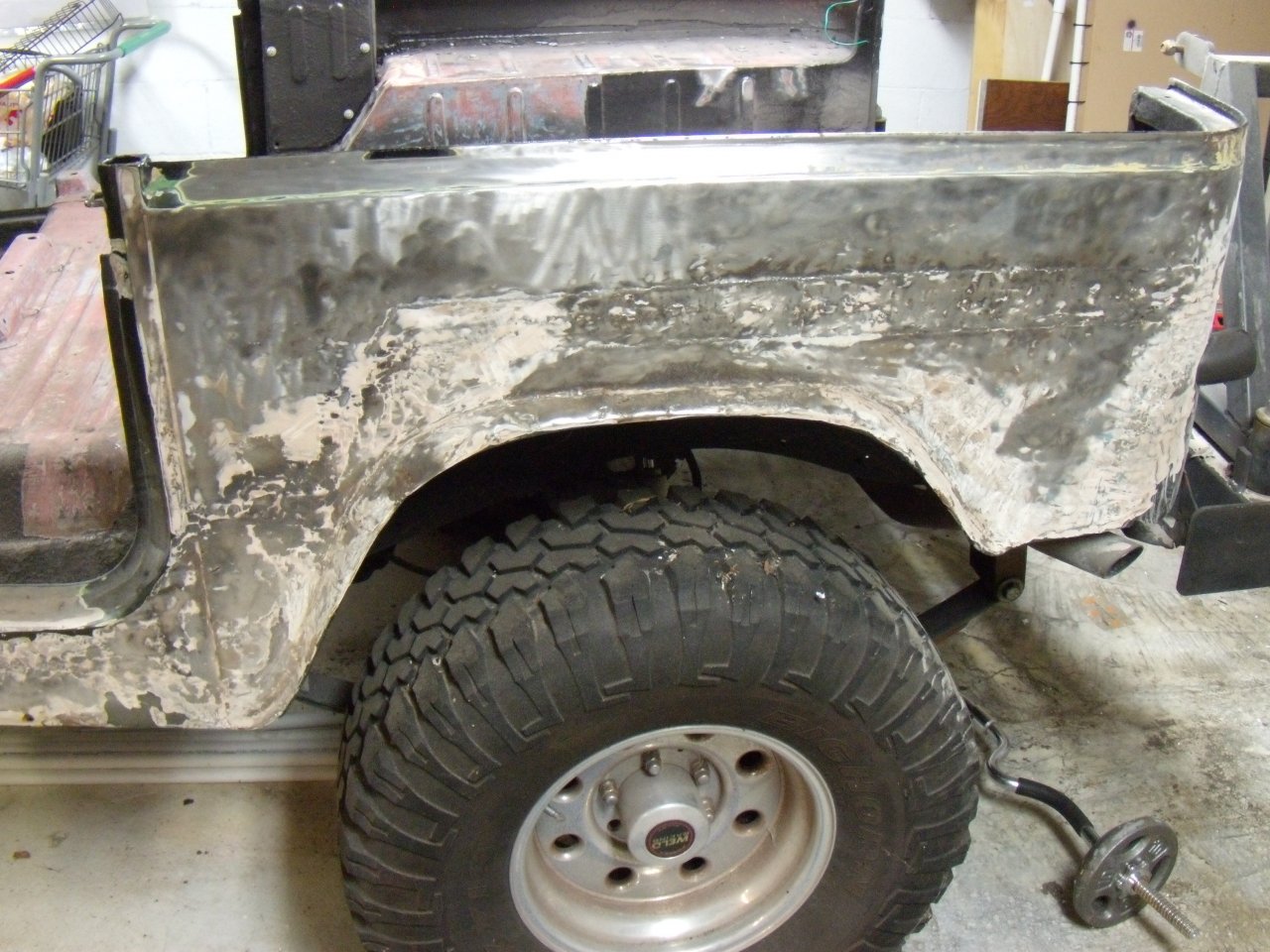 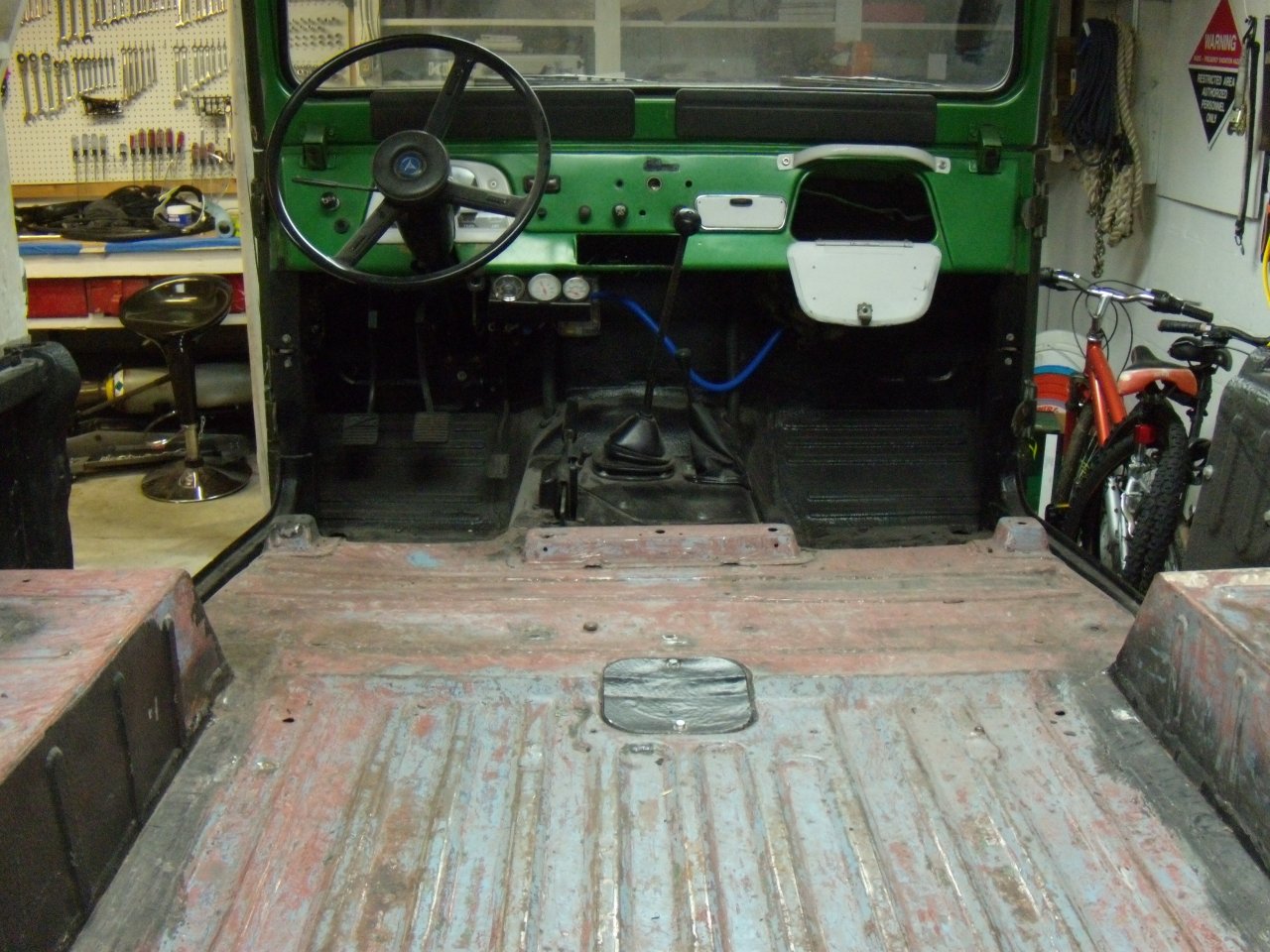 Price reduced to $13,750. I've had several inquiries about various parts for sale, but for the moment I'm trying to keep it together as a package. May sell the jump seats since the roll cage interferes with them anyway, though.

I'd like to buy those jump seats, what are you asking?
G

Not looking to part it out at this point in time, though I've gotten more than a little interest in the H55F and the jump seats. I may conceivably part with the jump seats since the roll cage interferes with them anyway, but I'd really rather sell the entire thing and let the next owner decide what they want to do with them.

Also reducing the price to $13,000 for the whole shebang.

I think that is a steal for this truck with all the parts included. If I had 13K I would buy it. GLWS
G

Another asking price reduction. Continuing to hold onto the parts to sell as a lot for the moment.
G

If you decide to sell parts, I'd be interested in getting a price on the PS pump with bracket. Thanks.
Glenn
Y

Is this your first cruiser that you put wrong parts on or are there more ? Doors are off 1864 and down ,your stuck with your Franken cruiser .
Y

kilercl0ne said:
Is this your first cruiser that you put wrong parts on or are there more ? Doors are off 1864 and down ,your stuck with your Franken cruiser .
Click to expand...

kilercl0ne said:
Is this your first cruiser that you put wrong parts on or are there more ? Doors are off 1864 and down ,your stuck with your Franken cruiser .
Click to expand...


The doors are actually correct. Those are post 76-77 doors. I think the smoke window threw you off but that was standard for non US market forties all the way to the end.

As many have stated this is a great price however not a lot of folks interested with that kind of cash. I know some folks making some serious $ buying rigs to part out, have you considered this? If you have the time and patience I think you'd get 12k outta that . Just my .002

roma042987 said:
The doors are actually correct. Those are post 76-77 doors. I think the smoke window threw you off but that was standard for non US market forties all the way to the end.
Click to expand...

Roma is correct, my 79 bj has them, but mine aren't as nice and will be replaced with new replacement doors.
G

Bumped the price down again.

Posting a few photos for a buyer. 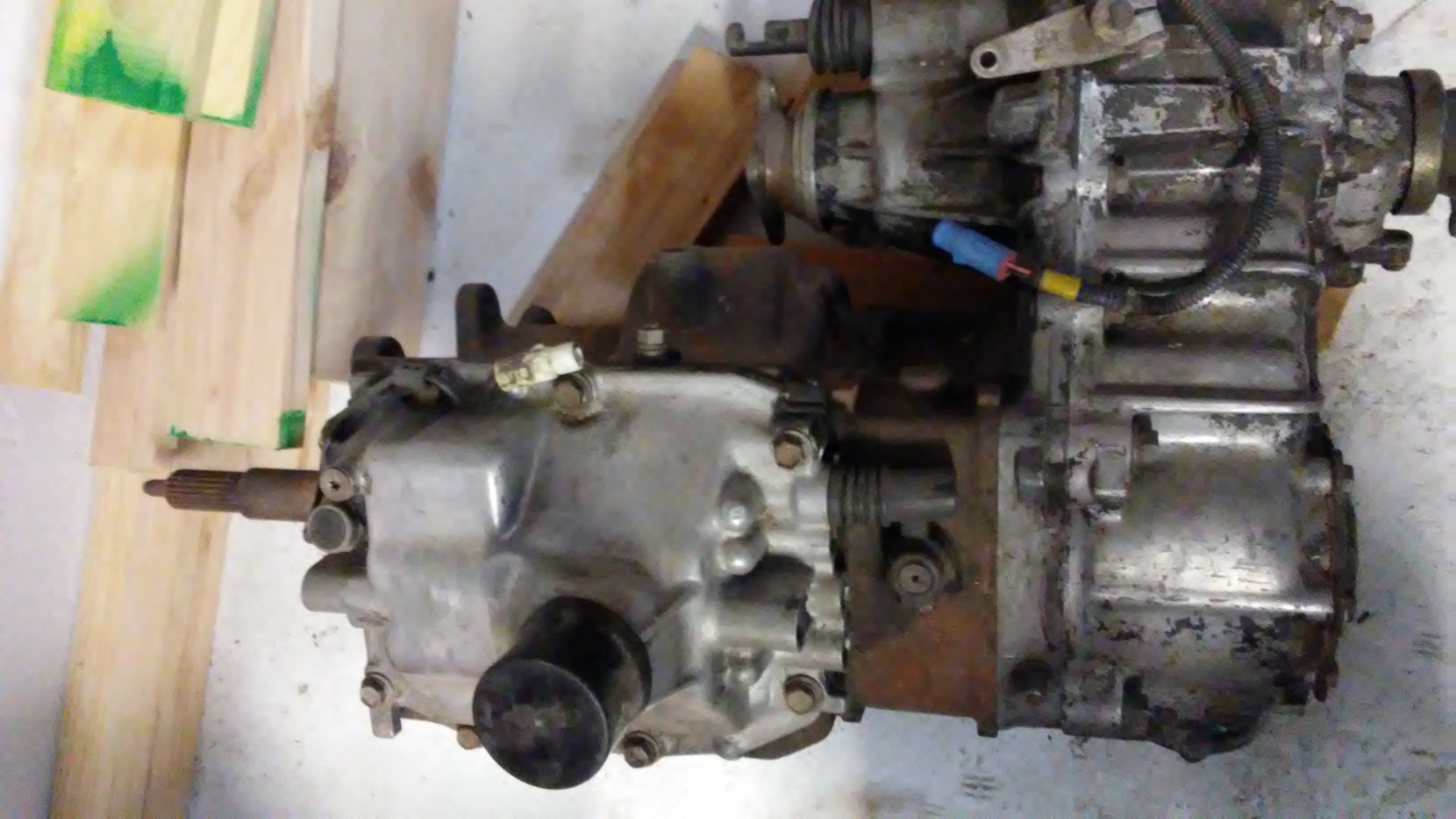 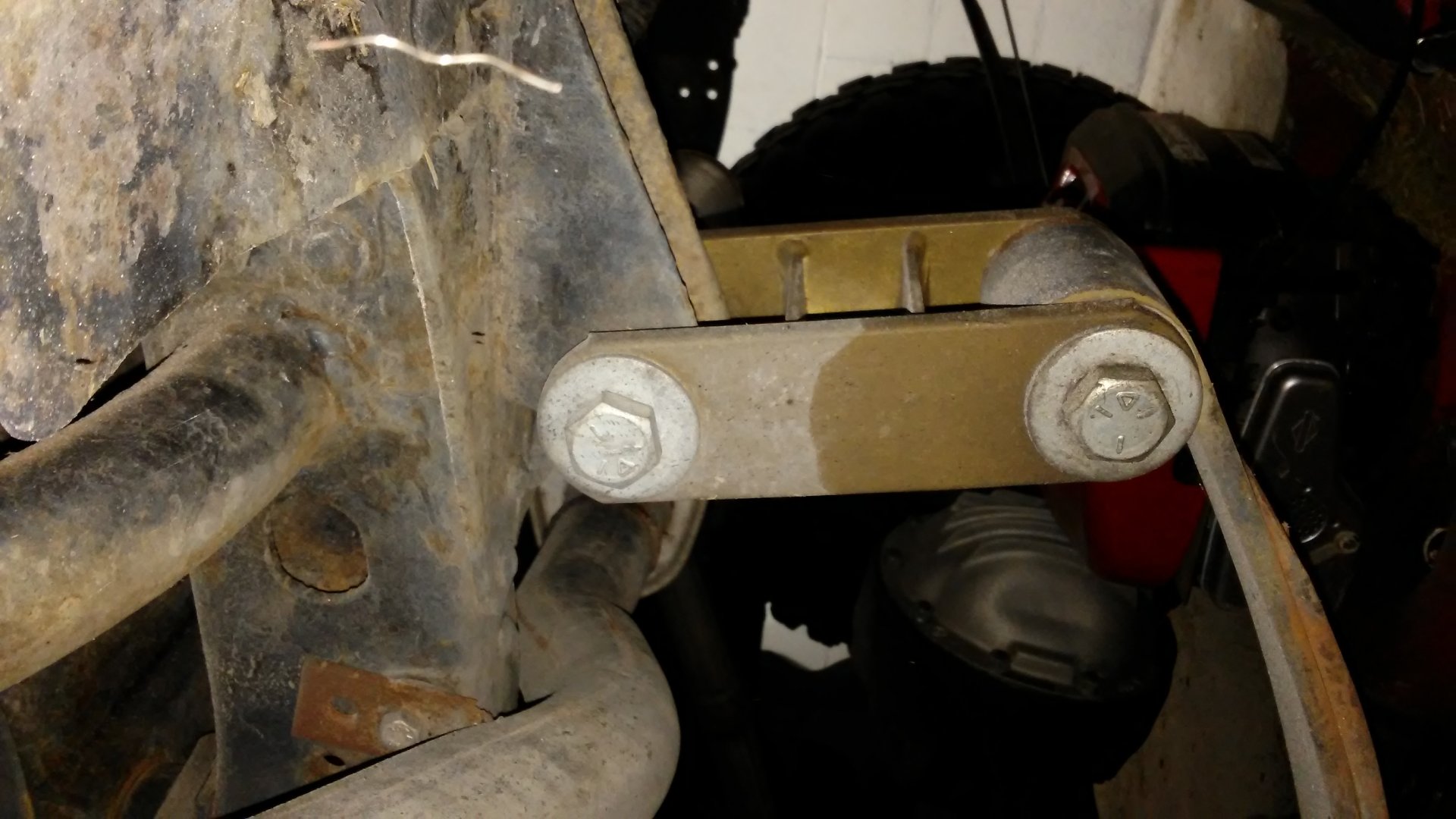 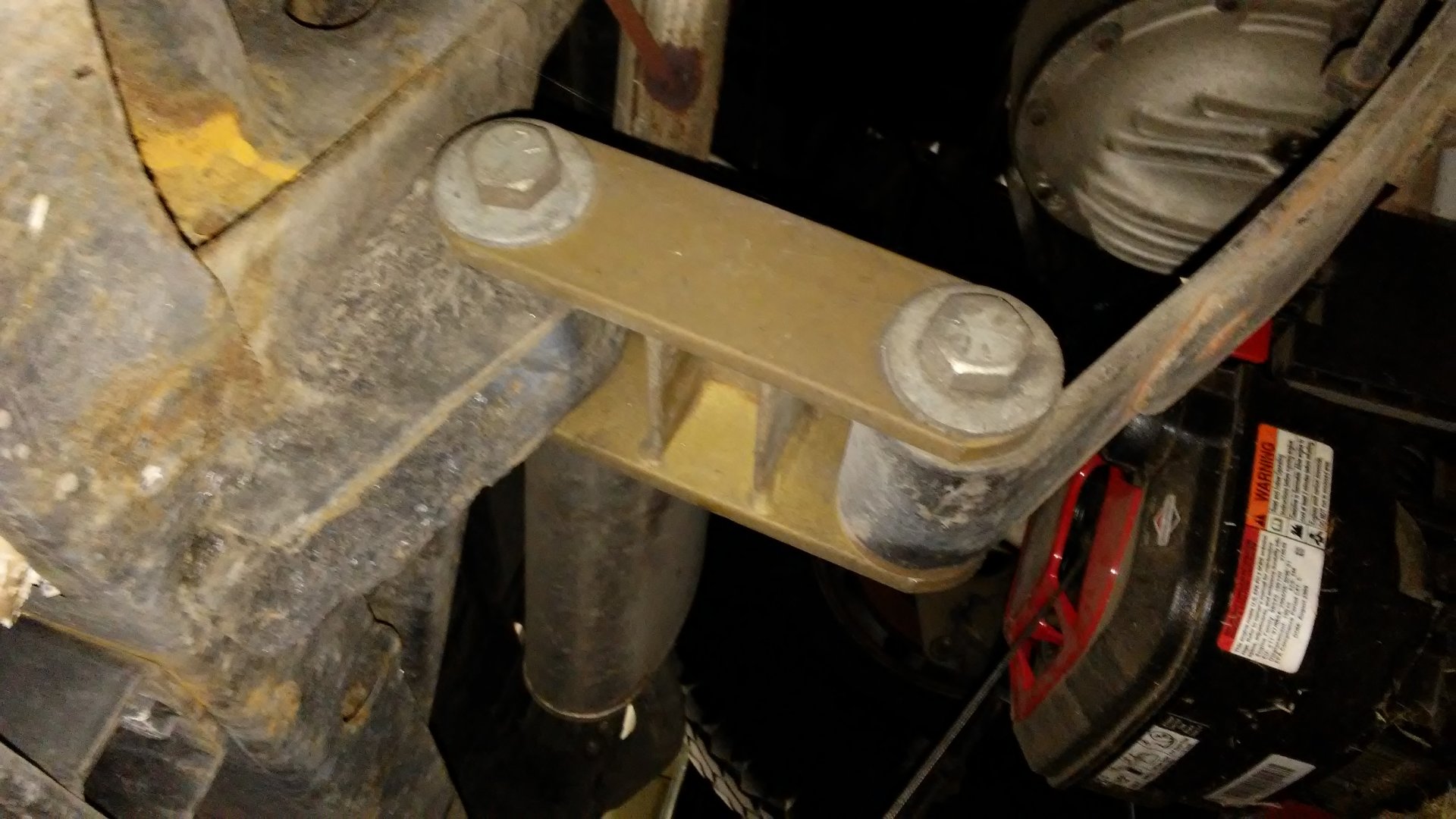 are the ac components available? i need brackets, pulley, mounts
You must log in or register to reply here.